We drive one of the Land Rover stunt cars from 'No Time to Die', then sample the new Defender 90 on and off the road. 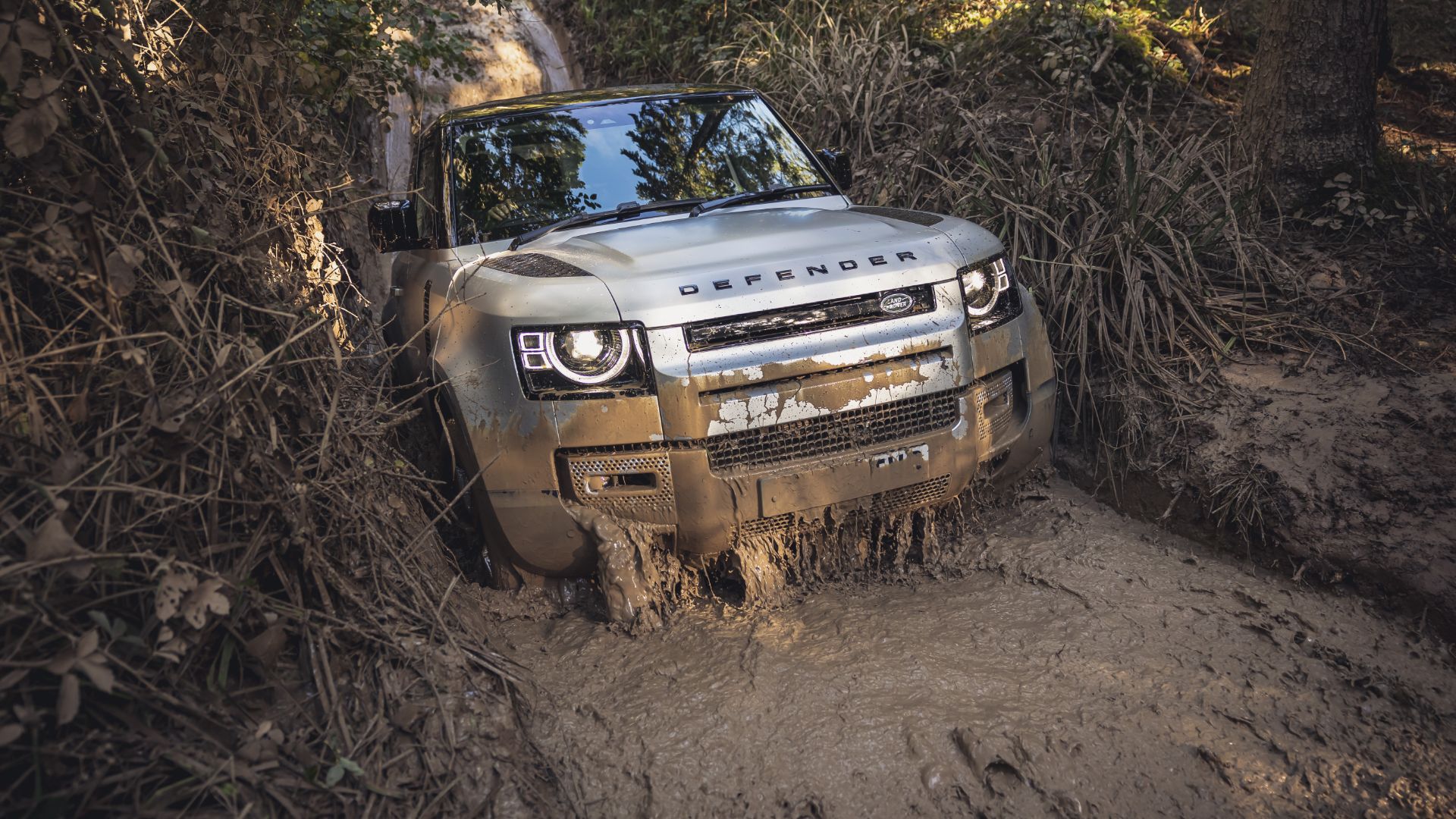 A blacked-out Land Rover Defender on Russian plates bursts through the mist. It bounces over the rutted field then slews sideways, dodging between scattered hay bales. Now it’s heading back this way, lights ablaze and engine roaring, rooster-tails of mud erupting from all four wheels. Just as suddenly as it appeared, it’s gone.

This could be an out-take from a James Bond movie. Indeed, it almost is. The Land Rover is one of the stunt vehicles from No Time To Die – originally due in April 2020, but delayed by a worldwide calamity even 007 couldn’t prevent. Watch the Defender TV ad and you’ll witness it leap 15 feet in the air, pursuing Daniel Craig through the Scottish Highlands. My mission will be more straightforward.

Appropriately, this is car number 007: the seventh Defender off the Slovakian production line. A sceptic might even think they planned it that way. It’s a mechanically standard Defender P400, but with no interior trim, a beefy roll cage and a giant vertical handbrake like a broom handle.

The bucket seat is bolted in place and clearly positioned for a gangly KGB henchman, so reaching the pedals is a stretch. Stunt pro and BTCC racer Jess Hawkins vaults into the passenger seat. “Are you ready?”

If in doubt, flat out 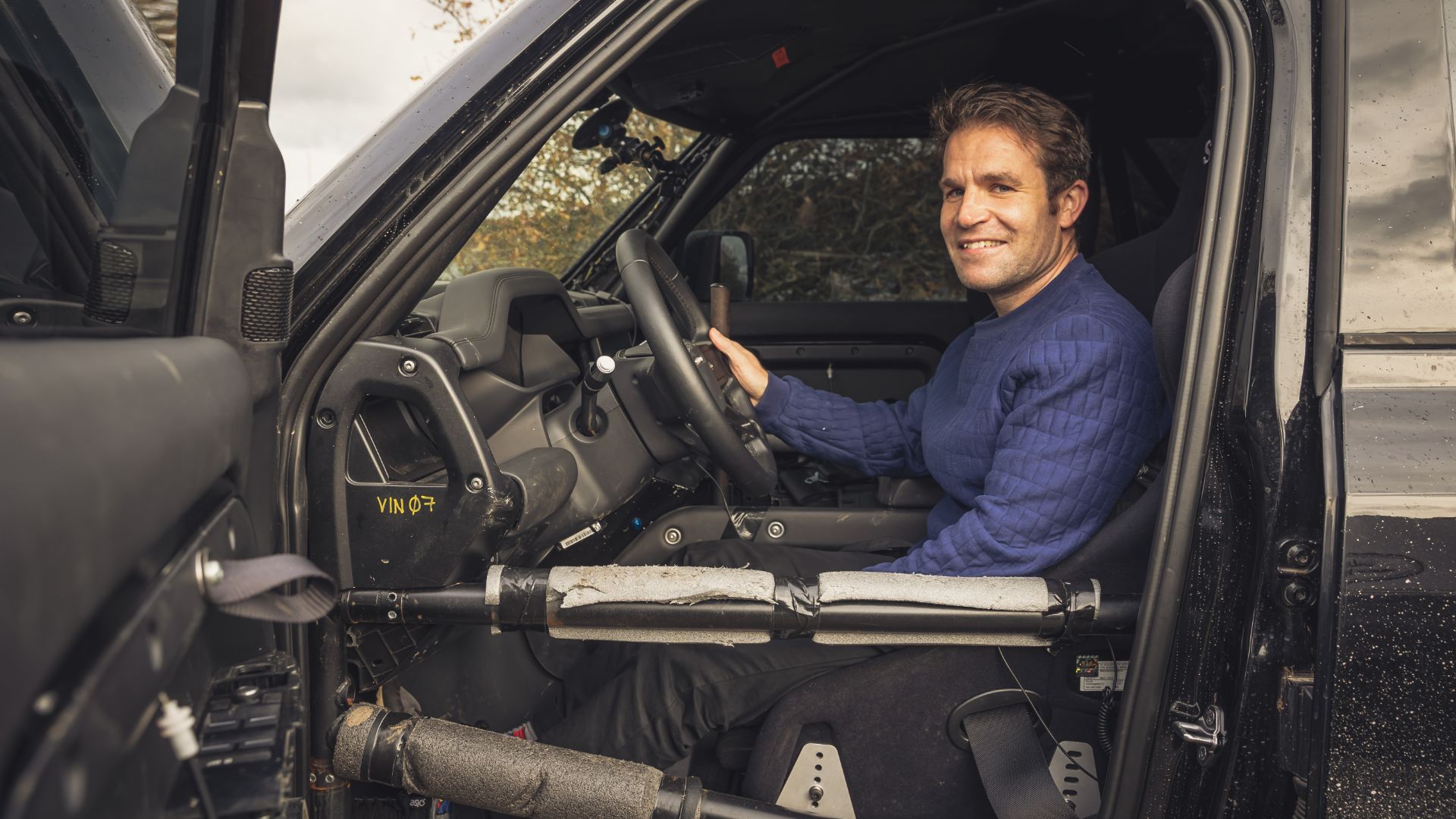 The grassy circuit isn’t particularly challenging. What is challenging is that Jess wants me to drive flat out all the time. Following her instructions via the intercom, I’m constantly on the throttle, sawing at the steering and using corners to scrub off speed.

The Defender flicks through a series of four-wheel drifts, lobbing huge clods of earth at the sky. The experience is more like rally driving than a carefully choreographed movie stunt, but it’s brilliant fun.

My next Defender drive is somewhat slower. The Eastnor Castle estate in Herefordshire has been Land Rover’s official playground since the 1960s. Here, you’ll discover more than 60 miles of off-road routes, many with daunting names such as ‘Nine Ropes Hill’.

From Discovery Sport to Range Rover, every new vehicle is put through its paces here, but some sections are designated ‘Defender only’.Yep, that’s where we’re going… 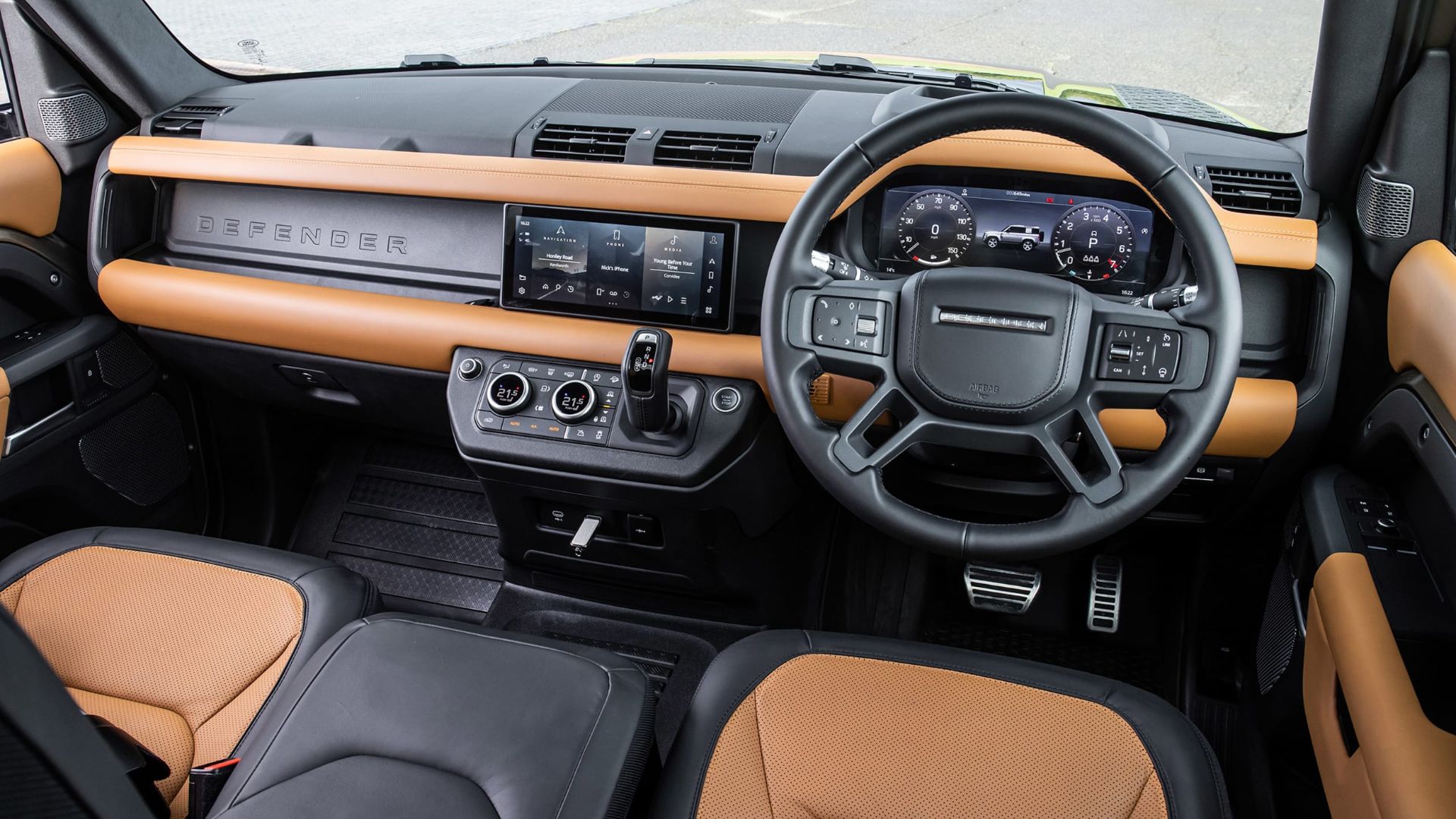 The stunt Defender was a full-size 110, but I’ve swapped into the new short-wheelbase 90. This has two fewer doors, rear windows that don’t open and a much smaller boot: 397 litres versus 1,075 litres. On the plus side, it looks cooler than the 110, costs slightly less, and can still seat six (if you specify the foldaway central front jump-seat).

This particular 90 is ‘basic’ spec, with coil springs rather than air suspension and a simpler Terrain Response traction system. Nonetheless, my instructor seems confident it can tackle Eastnor’s toughest trails.

And so it proves. Recent rain has made the hillsides especially slippery, yet select ‘Mud and Ruts’ and knock the eight-speed automatic gearbox into low range and the Defender doesn’t flinch. In that great British tradition, it simply keeps calm and carries on. The woods are so dense we need headlights on, but 3D surround-view cameras help with aligning the front wheels and following the deep ruts.

Climbing a steep track that’s almost become a stream, I sense individual tyres slipping and traction being shuffled around. Where the old Defender was utterly mechanical, this experience is more electronic.

On the Camel Trophy trail 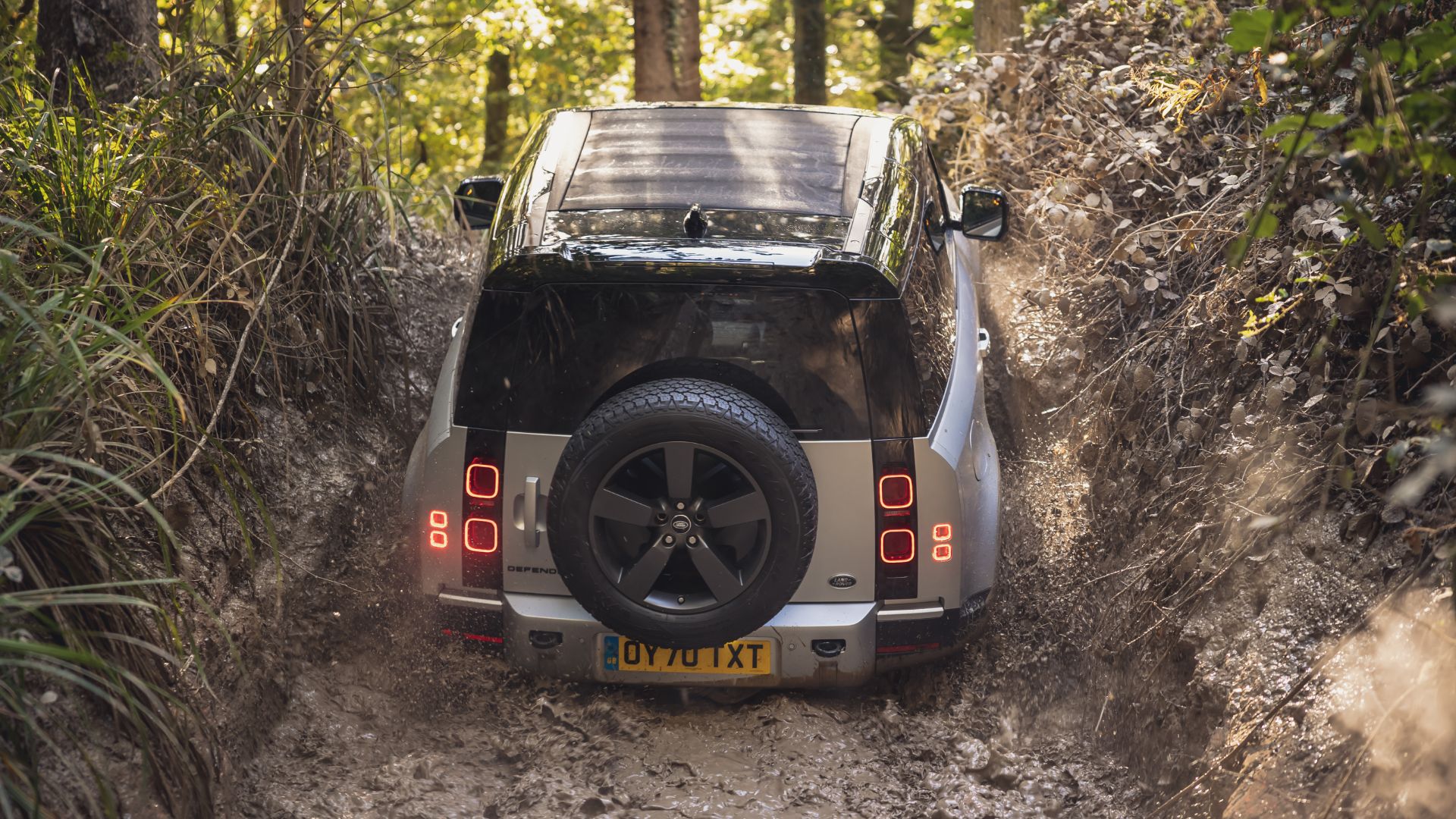 In some ways, it feels odd sitting in air-conditioned comfort while conquering such tricky terrain. However, the hardest part of our route has been saved for the end. The Camel Dips are three water splashes formerly used as practice for the gruelling Camel Trophy – and they will fully test the Defender’s 900mm wading depth.

‘Slow in, fast out’ is the technique; edge gently downwards like a swimmer entering an ice-cold pool, then gun the engine and hope for the best.

I manage the first two dips without incident, but the third is even deeper. I floor the throttle and the Defender lunges up the exit slope only for the front tyres to claw desperately at thin air. “You need more momentum,” crackles the walkie-talkie in the cupholder as I roll gently backwards, watching muddy water lap at the side windows. “Really go for it!”

Deep breath and … go! The Defender charges forward in a blare of revs and steam from the hot engine, hangs for a moment, then bounces down with a thud, narrowly missing a tree. Still, I’ve made it.

My final drive is another total contrast. For all its prowess at Eastnor, most new Defenders won’t commute via the Camel Dips. They’re more likely to be daily-driven in Hampstead than the Highlands. So it seems fitting to end with the flagship Defender 90 P400 X.

The ‘X’ signifies the top trim level, which includes 20-inch alloy wheels, darkened tail lights and a black bonnet. Frankly, it looks a bit ‘Premier League’ to me, and has a £77,400 price tag to match.

Hang on a minute, though, because the ‘400’ refers to the 3.0-litre straight-six engine’s output. And 400 metric horses – plus a brawny 406lb ft of torque – make this the fastest production Defender ever: good for 0-60mph in 5.7 seconds and 119mph. Not bad for something that weighs 2.2 tonnes and boasts the drag coefficient of a thatched cottage. 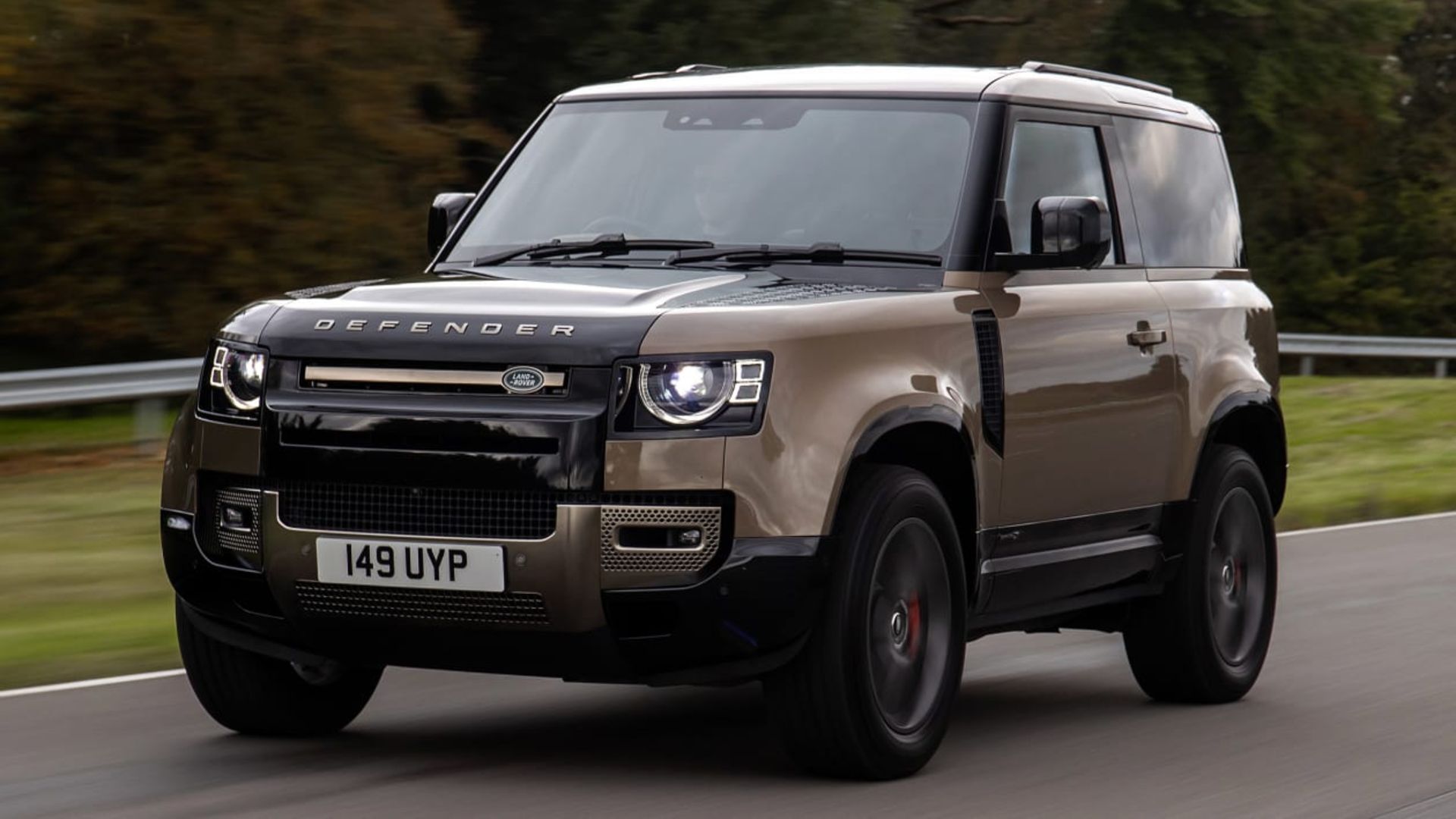 The P400 feels fast, too, not least because it pitches and rolls far more than, say, a Range Rover Sport. This is a utility vehicle with sporty performance, not an SUV – and I rather like that. You coax it through corners, feeling the chassis settle, then use that plentiful muscle to shrink the straights.

The auto ’box is quick to respond and the engine sounds throaty. Just don’t expect more than 20mpg if you get carried away.

So, what have we learned? That the new Defender is a riot in a muddy field. That it goes the places even other Land Rovers can’t follow. And that, with the right motor, it can out-run a hot hatchback. If you want a sensible review of the mid-range diesel, you’ll have to search elsewhere, but I can tell you this: I think Land Rover’s nailed it.

Driving the Defender feels like an event, which simply isn’t the case with most SUVs. It shares as much with the original as a MacBook Pro does with a typewriter, yet it retains that car’s indomitable character. Mission accomplished, Mr Bond.