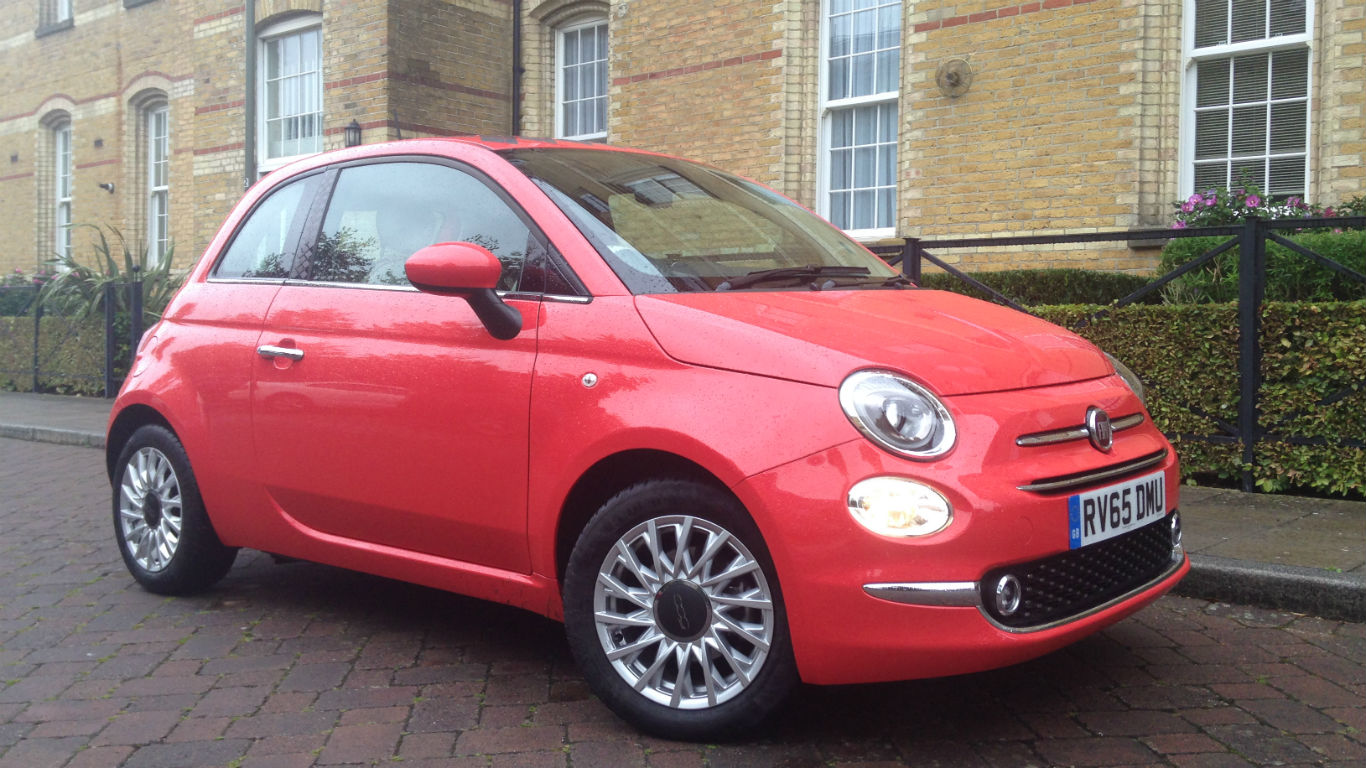 Around one in five city cars sold in the UK is a Fiat 500 – not bad for a car launched nine years ago. The 500 was updated in 2015, with minor styling tweaks and a new touchscreen media system. Can it still compete with newer, cheaper rivals? We drove the best-selling 1.2 petrol to find out. 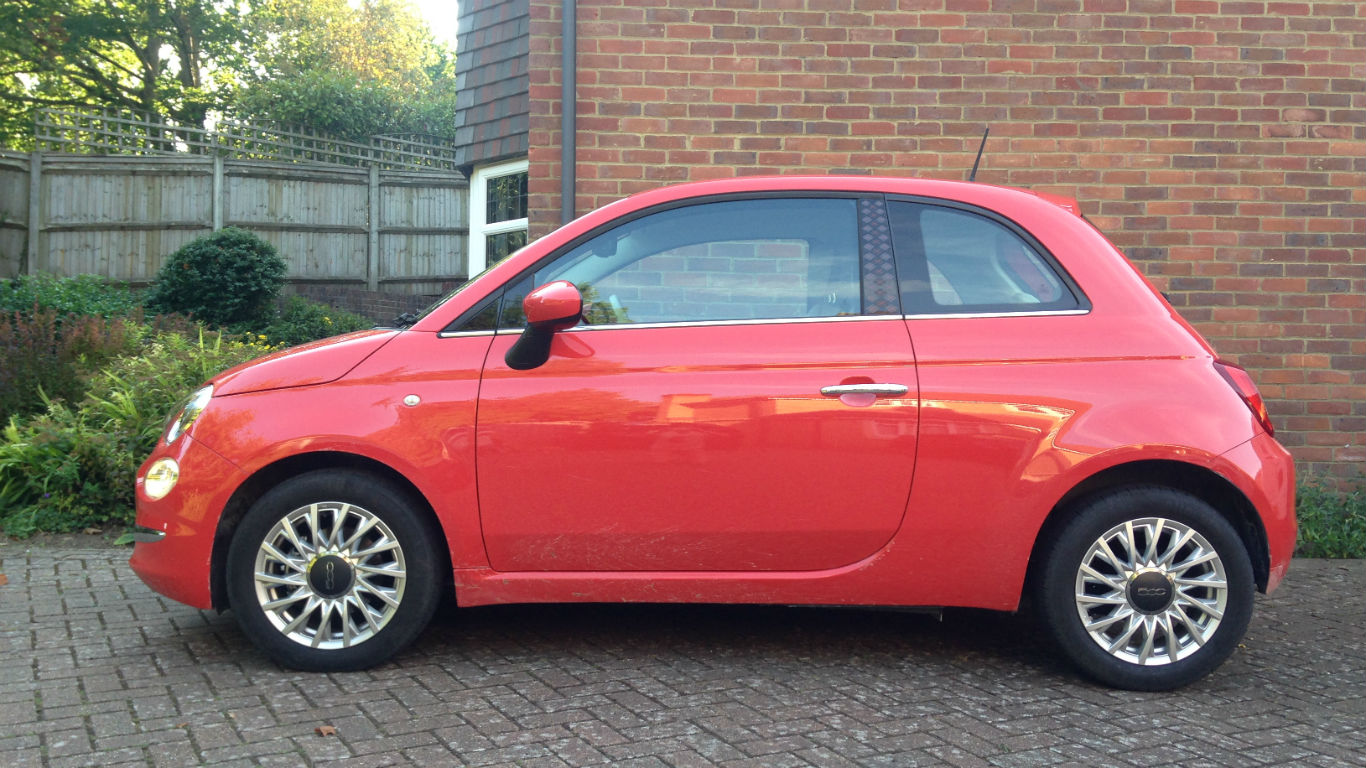 Fortunately, there are plenty of discounts available. The 1.2 Lounge model we tested retails at £12,800 before options, but the same car is just £9,908 from online car broker, Drive The Deal. Equally, ‘reverse auction’ website Auto eBid offered a price of £10,056. 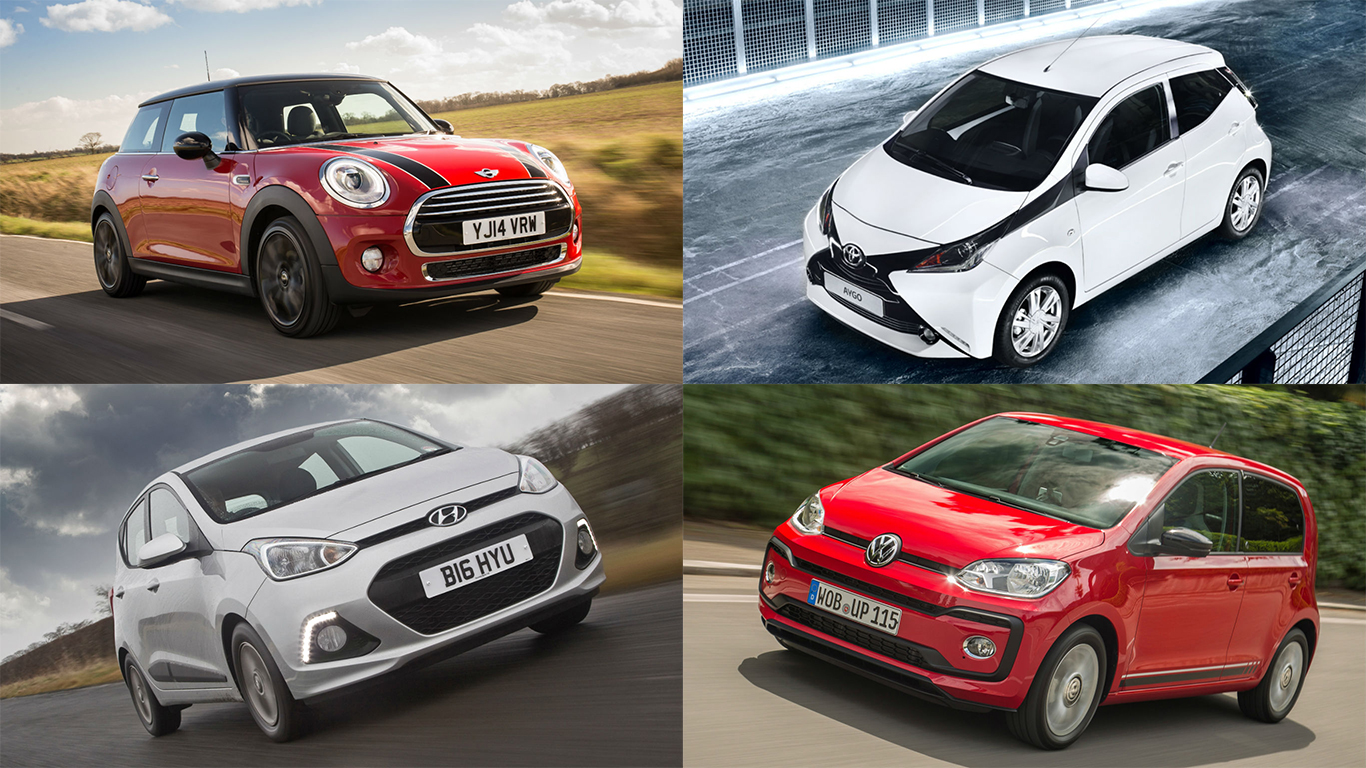 In terms of style and emotional appeal, the 500’s closest rival is the MINI. However, BMW’s retro-remake is larger and more expensive: a supermini rather than a city car.

The Toyota Aygo, Hyundai i10 and Volkswagen Up are all direct competitors. The Toyota – along with its near-identical sisters, the Citroen C1 and Peugeot 108 – also majors on style and is usefully cheaper than the 500. The Hyundai also plays the value card, and is fun to drive.

The Up, meanwhile, offers Germanic build quality and plenty of interior space. It’s also one of triplets: the SEAT Mii and Skoda Citigo are the same under the skin, but cheaper to buy. 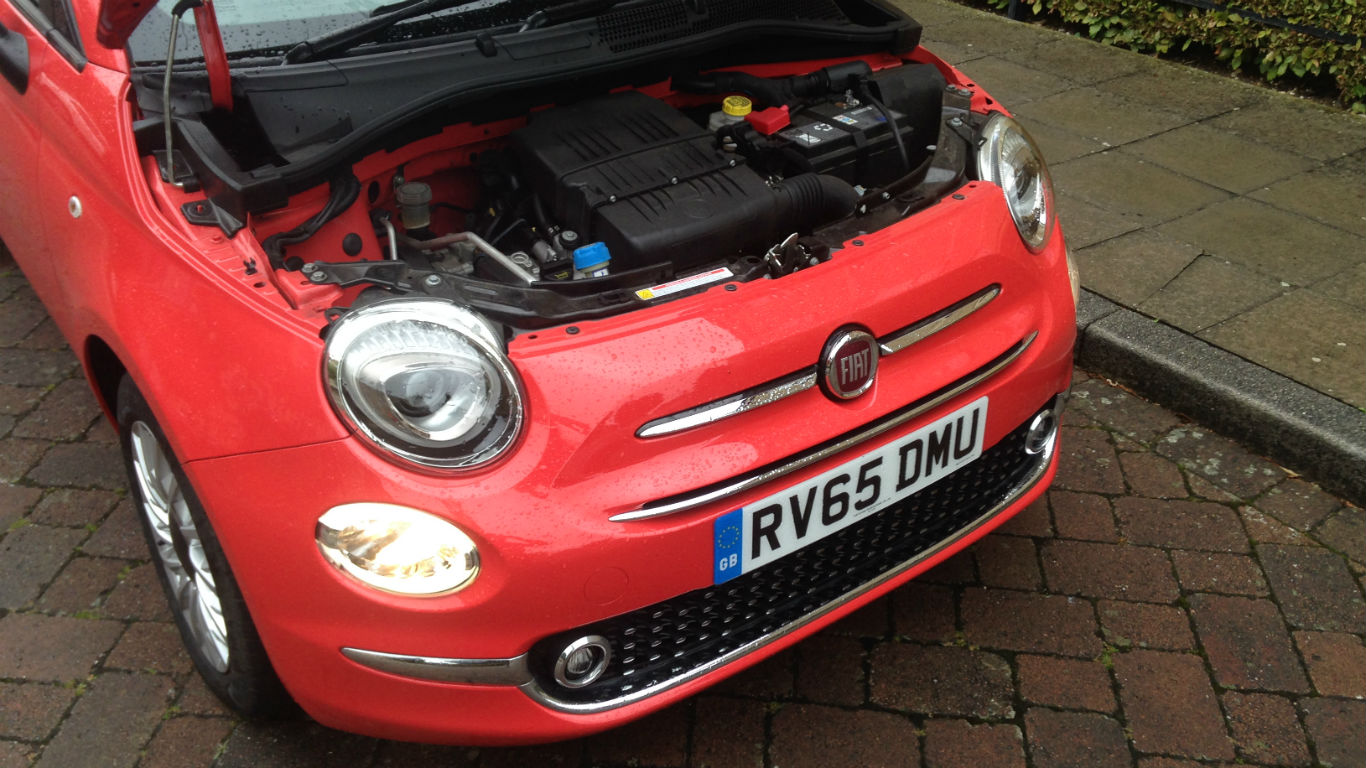 Our test 500 is powered by a 69hp 1.2-litre petrol engine. You can also opt for the noisy but zesty two-cylinder, 0.9-litre Twinair – available in 85hp and 105hp outputs. Unusually for a car this size, Fiat offers a diesel engine, too: the 95hp 1.3 Mulitijet. 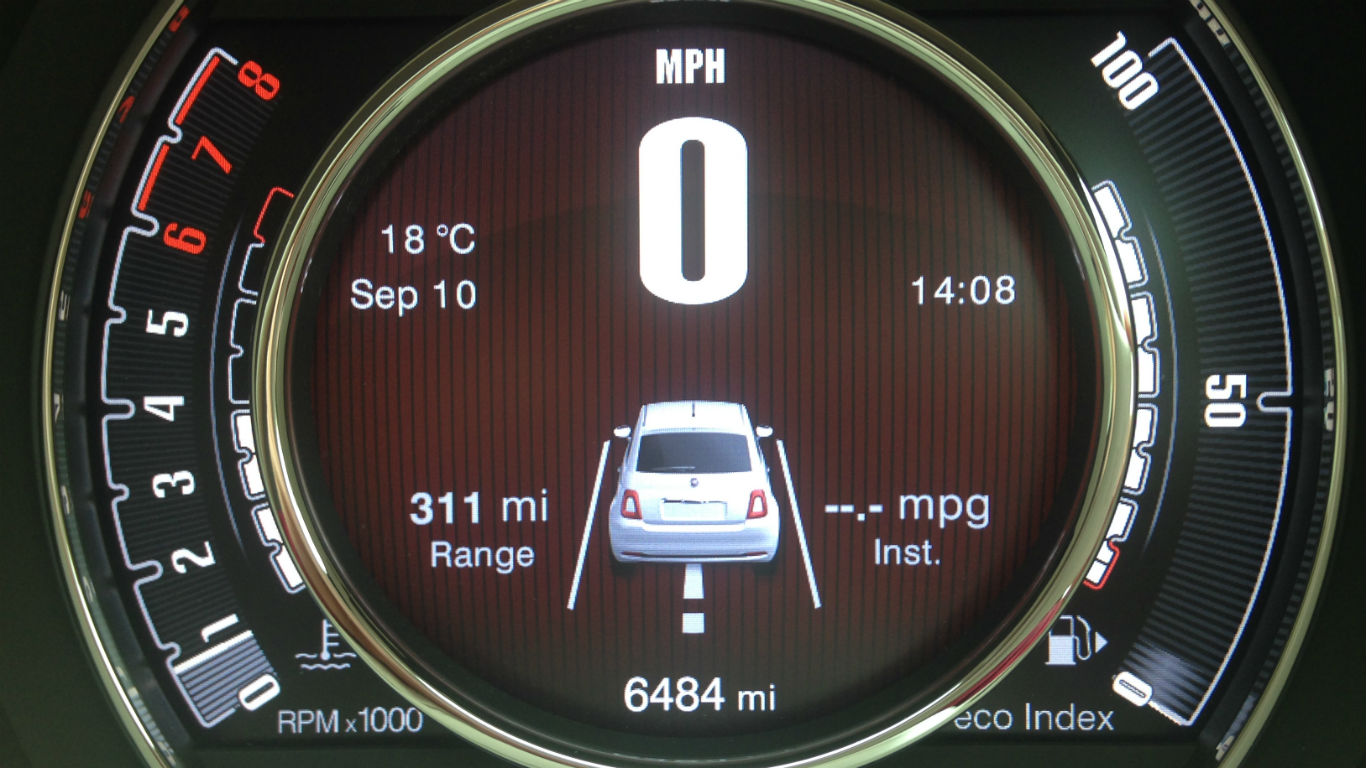 Back in 2014, the Fiat 500 1.2 was featured on BBC Watchdog, amid allegations that it could “barely get to the tip of a hill.” It showed a presenter driving up a one in 10 incline in (what appeared to be) second gear, claiming she could “feel the lack of power.” Former Stig Ben Collins reached a similar verdict.

Fiat has since applied a software update, which is claimed to improve driveability. Nonetheless, this still isn’t a fast car. The 0-62mph dash takes a leisurely 12.9 seconds and maximum speed is 99mph. 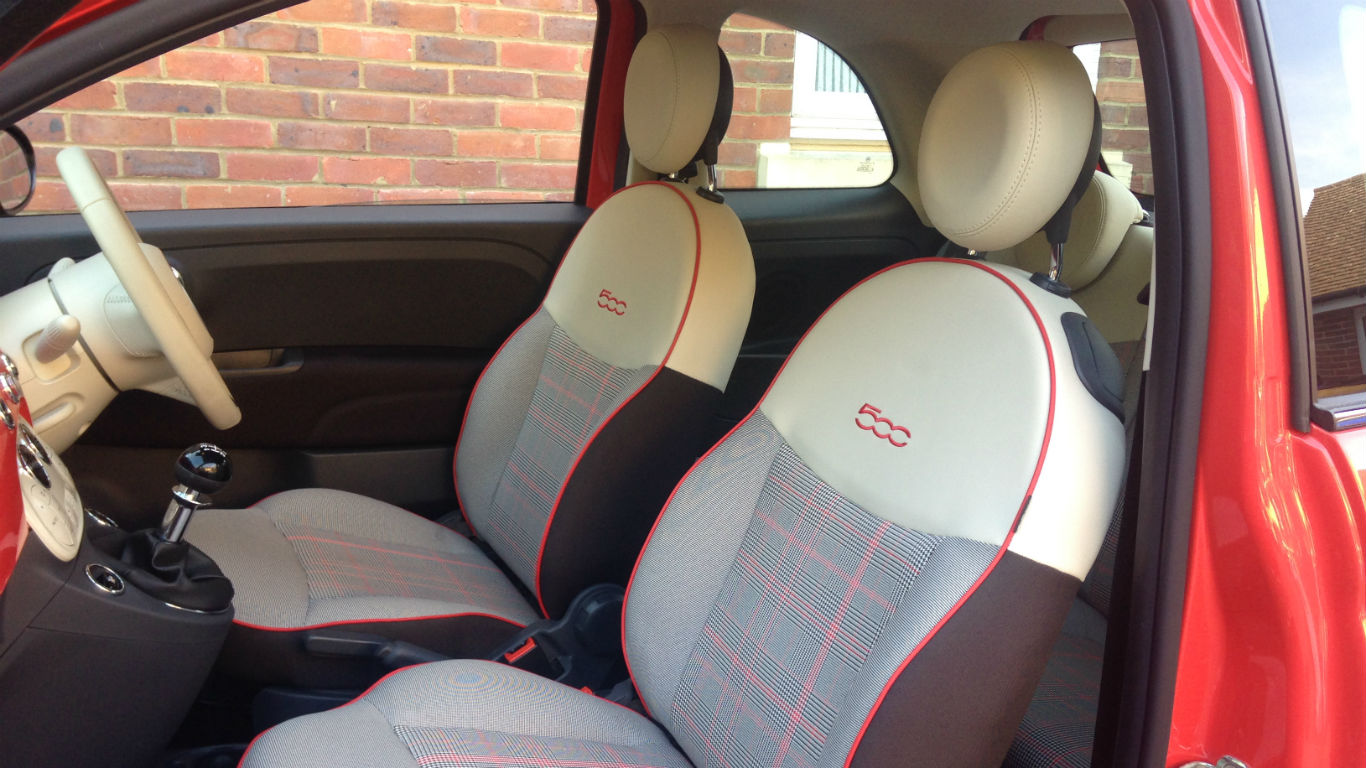 Park a 500 next to an original (1957-1975) Cinquecento and it looks huge. However, it isn’t as efficiently-packaged as many rivals – not least the mechanically-similar Fiat Panda.

We found it comfortable in the front, although the driving position is very upright: you feel like you’re sitting ‘on’ the car, rather than in it. Rear-seat passengers are likely to complain about the lack of headroom. Blame that cute-and-curvaceous roofline.

The 500 is a very easy car to drive, particularly in town. Its controls are light (the steering even has a ‘city’ mode for fingertip-twirling) and the lofty driver’s seat offers good visibility. A compact footprint makes it a doddle to park, too.

Escape the urban jungle and the little Fiat is less convincing. Its over-assisted steering doesn’t inspire confidence and there’s lots of body-roll in the corners. The 69hp engine hardly fizzes with enthusiasm either, particularly when it comes to steep hills… 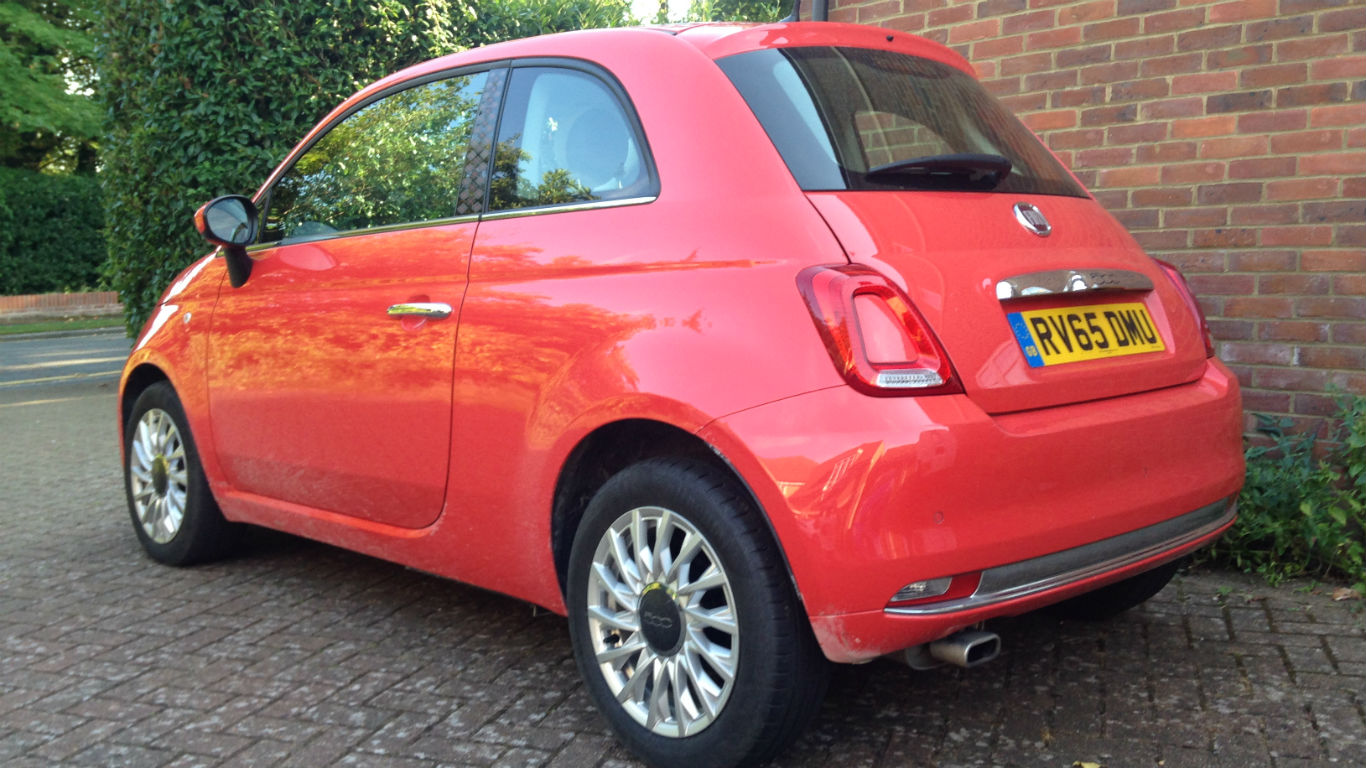 Both versions of the two-cylinder Twinair petrol are more efficient on-paper: 74.3mpg and 67.3mpg for the 85hp and 105hp engines respectively. However, the Twinair rarely gets anywhere near these claimed figures in independent tests. Perhaps its rev-happy nature encourages lead-footed driving? 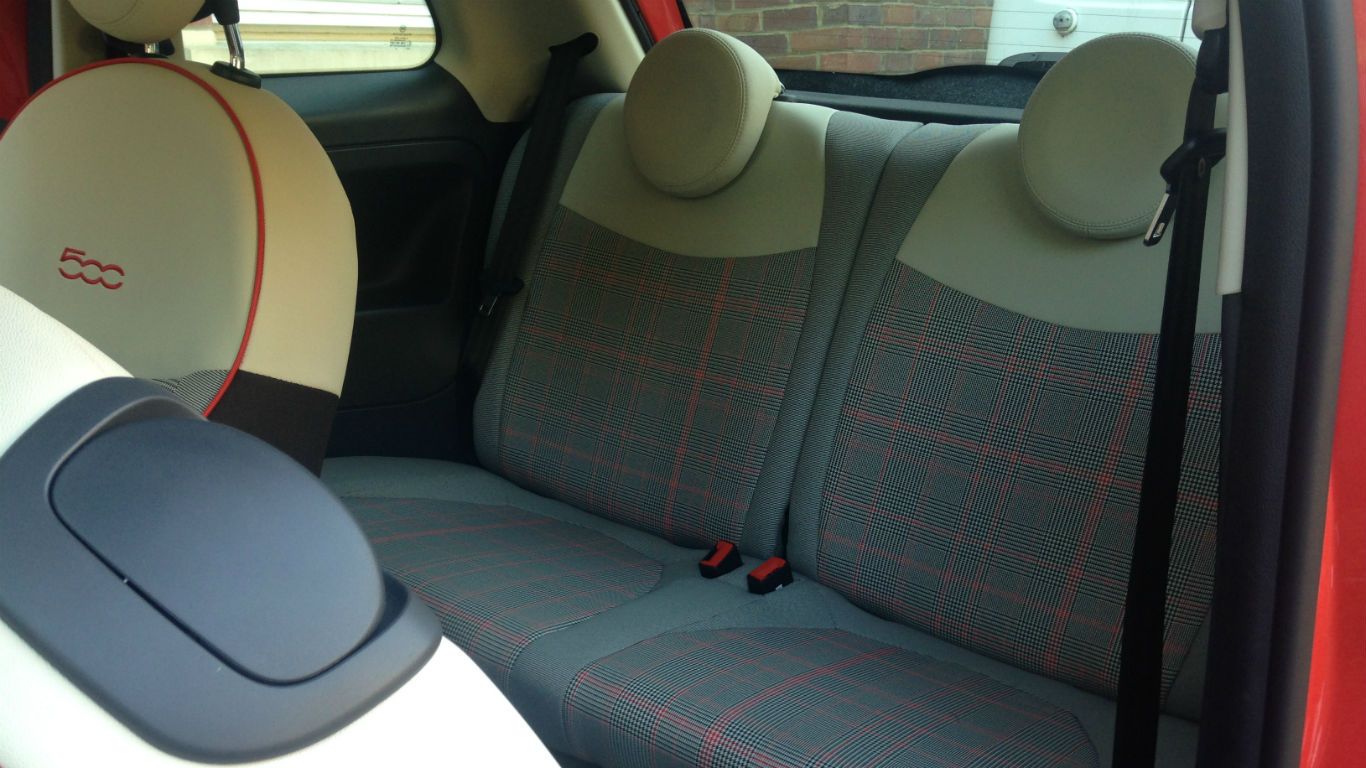 The entry-level Pop comes with remote locking, electric front windows and a radio with USB and Aux sockets. Upgrading to Pop Star adds air conditioning, electric mirrors and a split/fold rear seat. The Lounge seen here has the Uconnect touchscreen (more on that shortly), a leather-wrapped wheel and rear parking sensors. 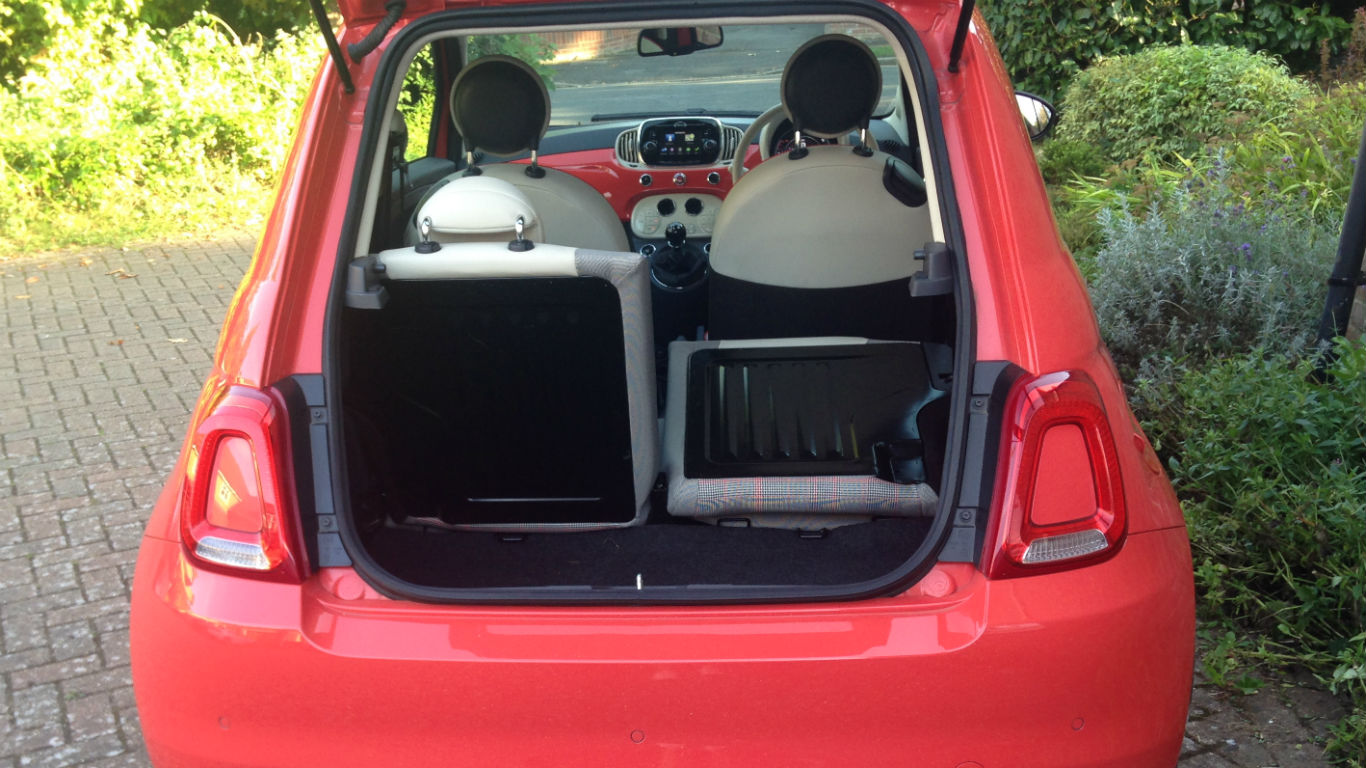 Not particularly. There’s no five-door version, so rear passengers must clamber behind the front seats. And lifting child seats in and out is hip-twistingly awkward.

Luggage space is a modest 185 litres: enough for a weekly supermarket-shop, but much smaller than the 251-litre Volkswagen Up. 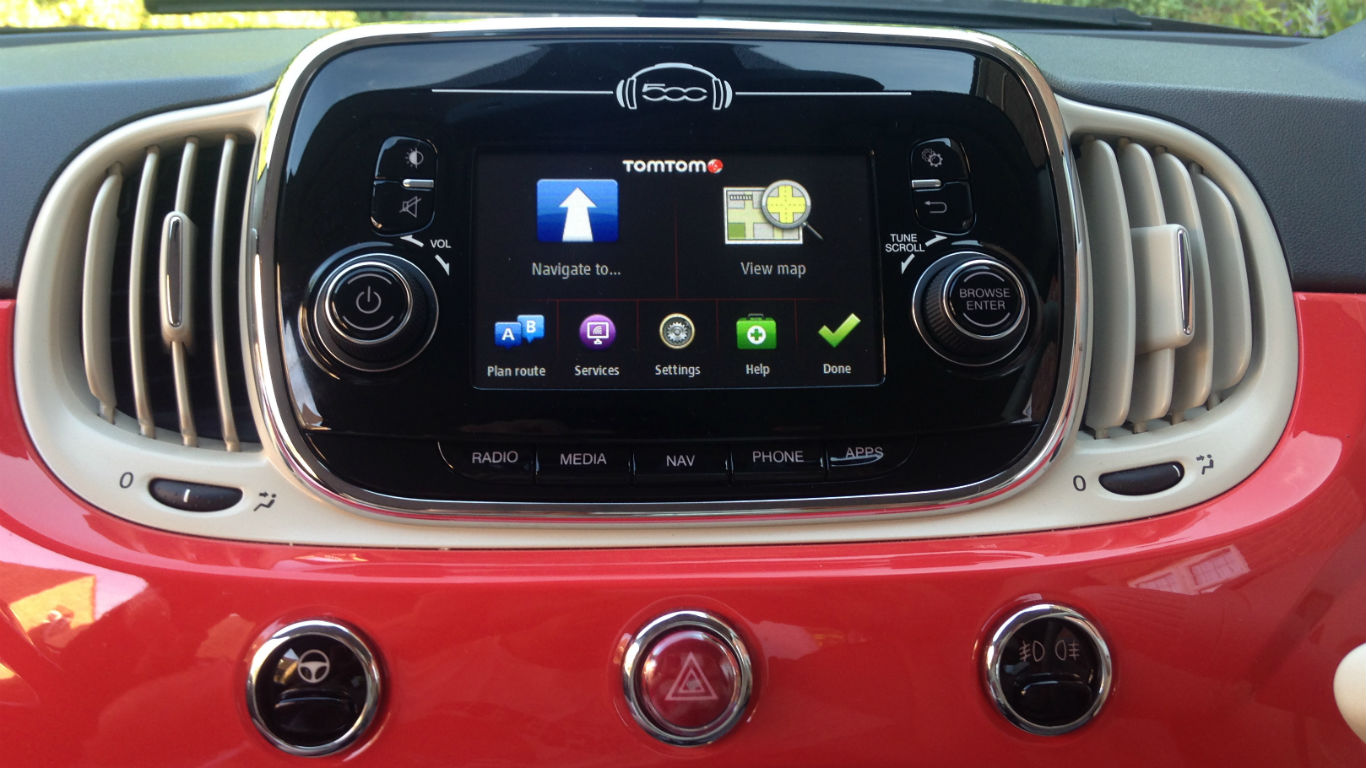 Fiat’s latest Uconnect touchscreen ‘infotainment’ system is mounted high on the dashboard and proves straightforward to use, despite a small, five-inch screen. The TomTom sat nav (£350 – with DAB radio included) is particularly good, with bold graphics and live traffic data.

Our car also had the option seven-inch TFT screen in the binnacle behind the steering wheel (£350). It displays lots of useful driving data, along with a neat graphic of the car itself. 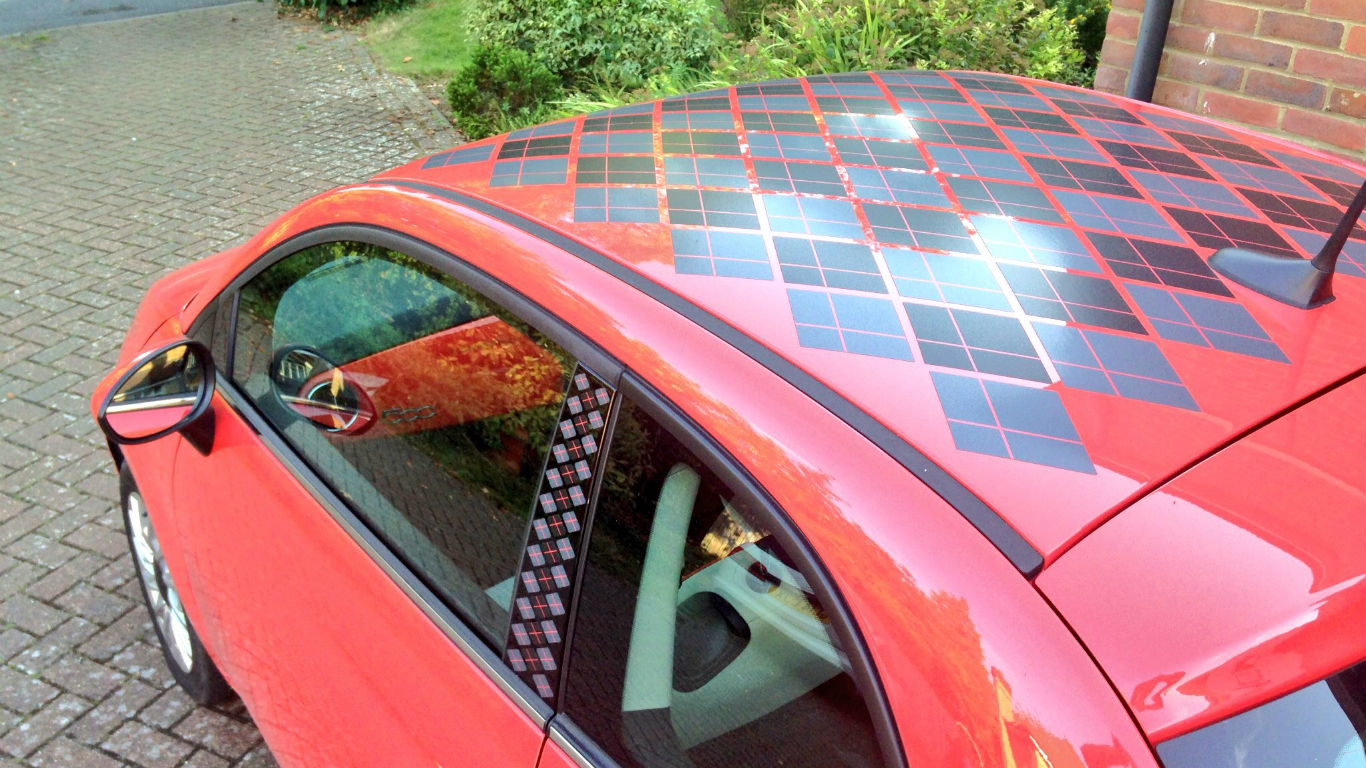 Euro NCAP awarded the Fiat a full five stars when it crash-tested one back in 2007. Standard safety equipment includes seven airbags and Isofix mounting points for child car seats. 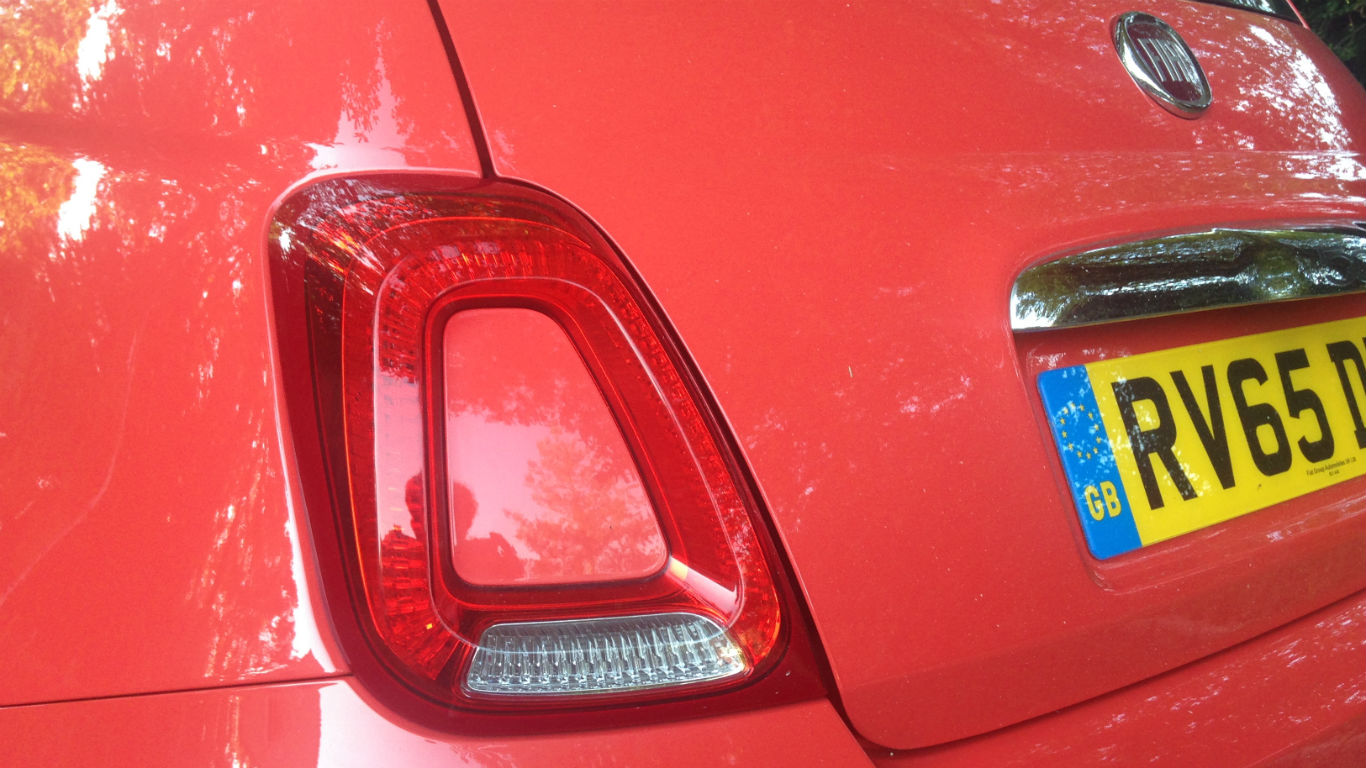 Simple is often best when it comes to small cars – and so it is with the Fiat 500. The 69hp 1.2 engine might struggle to pull skin off a panna cotta, but it’s peppy enough for pottering around town and decently economical. The 500 isn’t sporty, or even particularly fun to drive, so why pay more?

Likewise, we’d go for the mid-range Pop Star, rather than the fully-loaded Lounge seen here. With all the options fitted, our test car came to a faintly ludicrous £15,950. You could (and should) get a nice Ford Fiesta for that much. 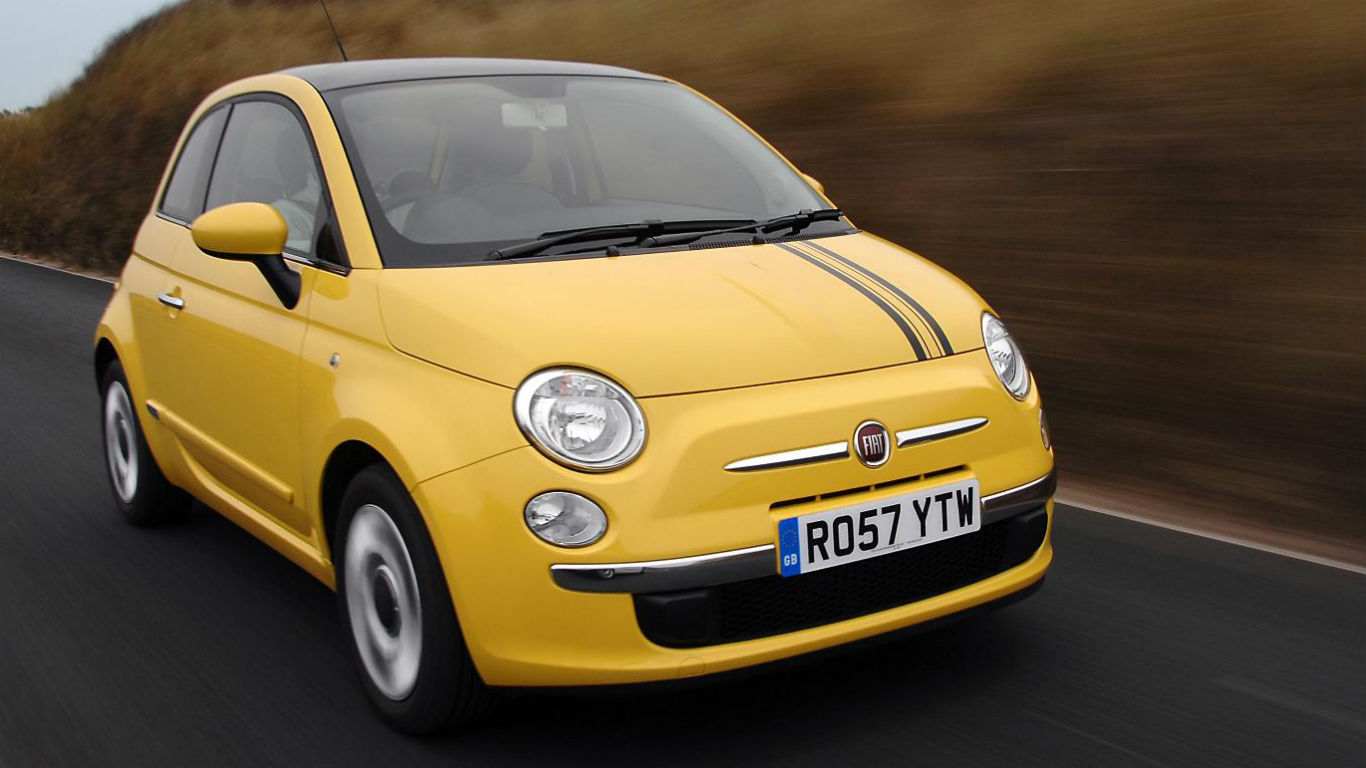 The 500 has been on sale since 2007, so there are plenty in the classifieds. Prices start at around £3,000 for an early example with 80,000-90,000 miles on the clock. Just bear in mind that the three-year warranty will have expired and Fiats aren’t renowned for reliability; the brand is always among the backmarkers in the annual Which? Car Survey. 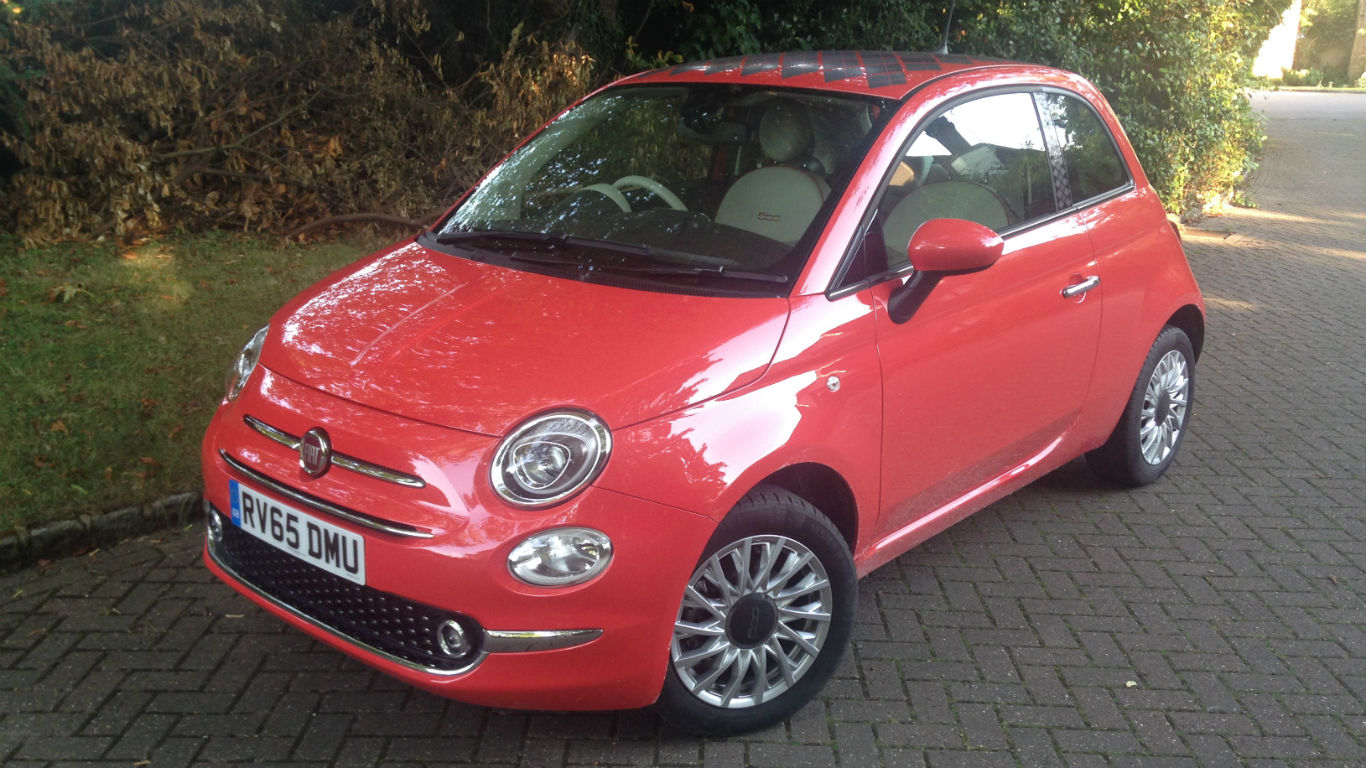 The 500 has been a sales phenomenon for Fiat. Indeed, the Italian marque has ended up modelling most of its range on it: witness the 500L and 500X.

Despite its faults, the 500 is classless and effortlessly cool. Yes, the VW Up is a better car in most respects – and cheaper, too. But many 500 customers simply won’t care. We wouldn’t buy one, yet even after nine years on sale, we’re sure thousands will. 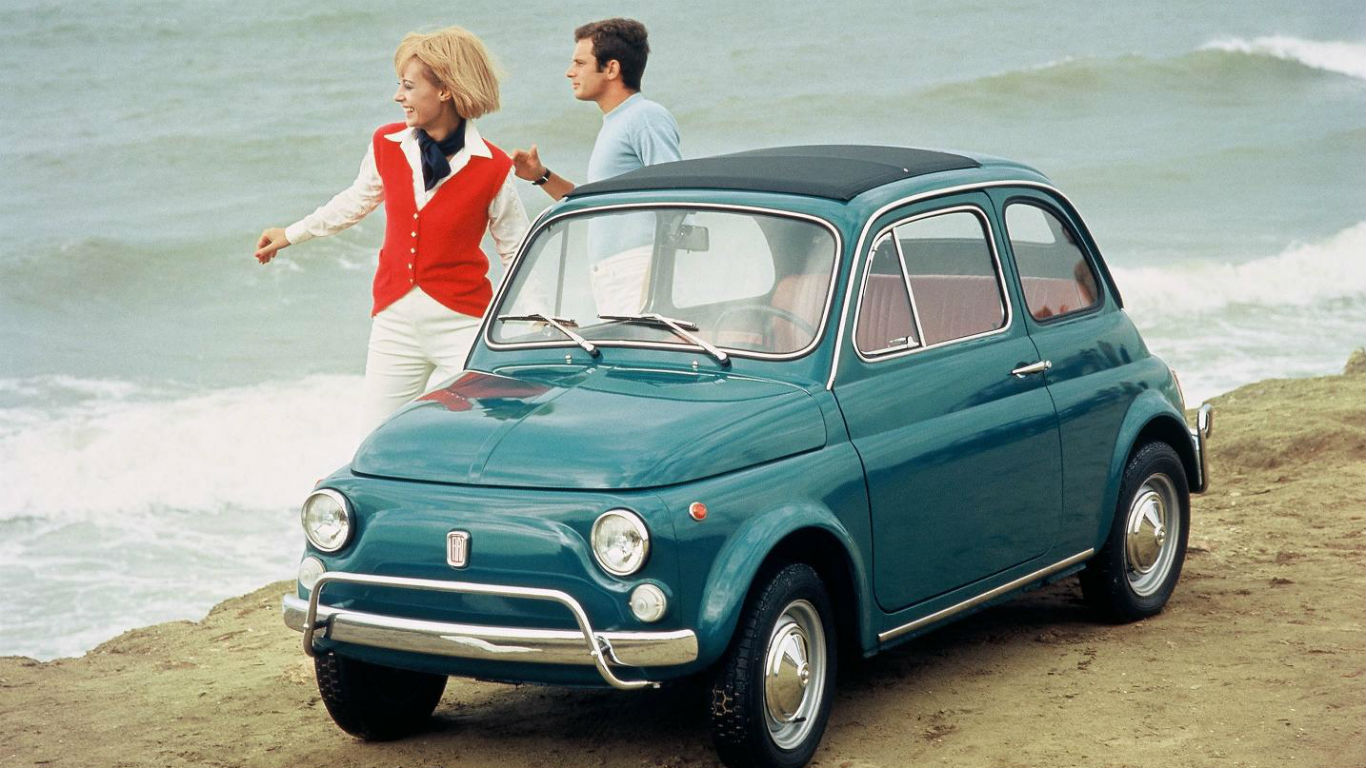