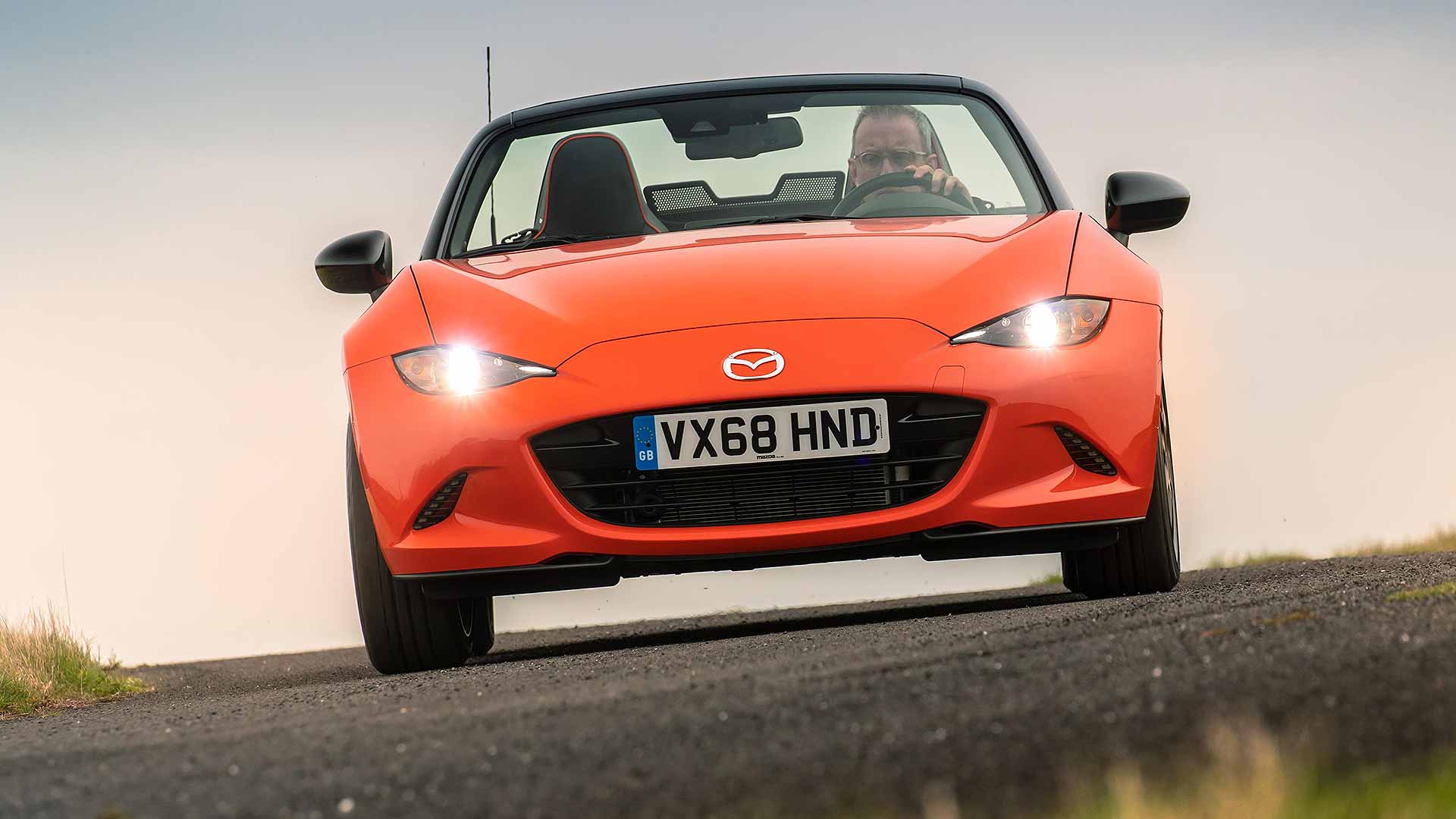 The Mazda MX-5 has turned 30 and to celebrate, this vivid orange 30th Anniversary limited edition is now available in dealers. Be quick: there are only 3,000 globally and 550 for the UK. Half of our allocation has already been sold, without anyone even driving it. Such is the appeal of this marvellous little sports car, which gets better with every passing year.

Those buyers haven’t gone in blind. The MX-5 30th Anniversary is based on the range-topping 184hp Sport. This was updated last year, with a little more power, and an engine that revs even harder – all the way around the dial to 7,500rpm. It made a superb car even better. 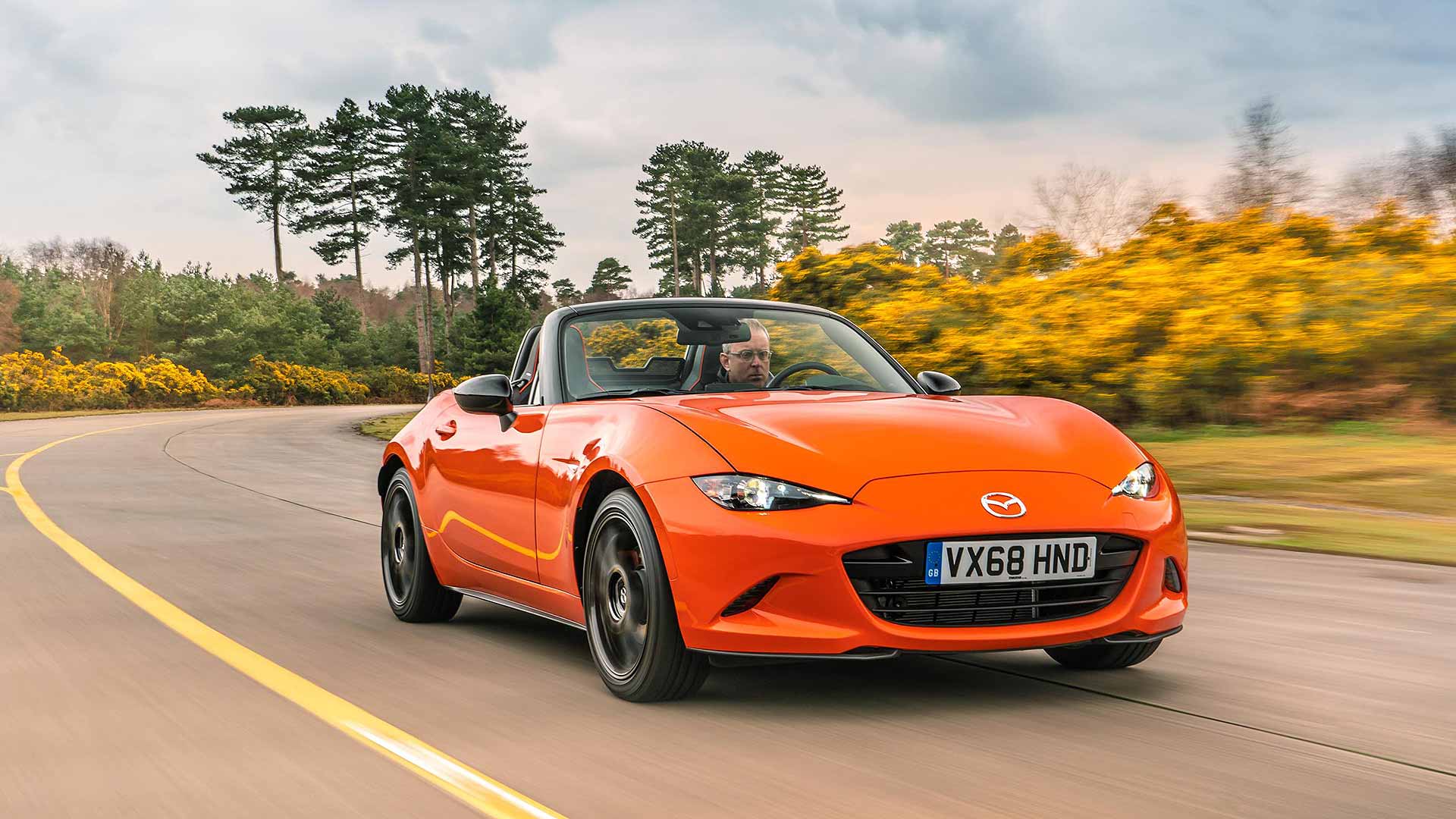 That engine is one of the greatest four-cylinder motors you can buy. Rotary-smooth, it starts up with a fruity growl and is likeable in everyday use, but really comes alive when the rev counter hits vertical. The noise hardens, power appreciably intensifies and you’re bwapping on the rev limiter before you know it. Genuinely thrilling.

The MX-5 is as fast as it needs to be, and no more. Zero to 62mph takes 6.8 seconds – but this isn’t a car about speed, it’s about sensations. Lighter than most cars on the road (at 1,124kg, it weighs almost 10 percent less than a five-door Ford Fiesta), this is reflected in the delicacy of the steering, the light clutch, the delectable short-throw gearbox – again, probably the best you can buy. 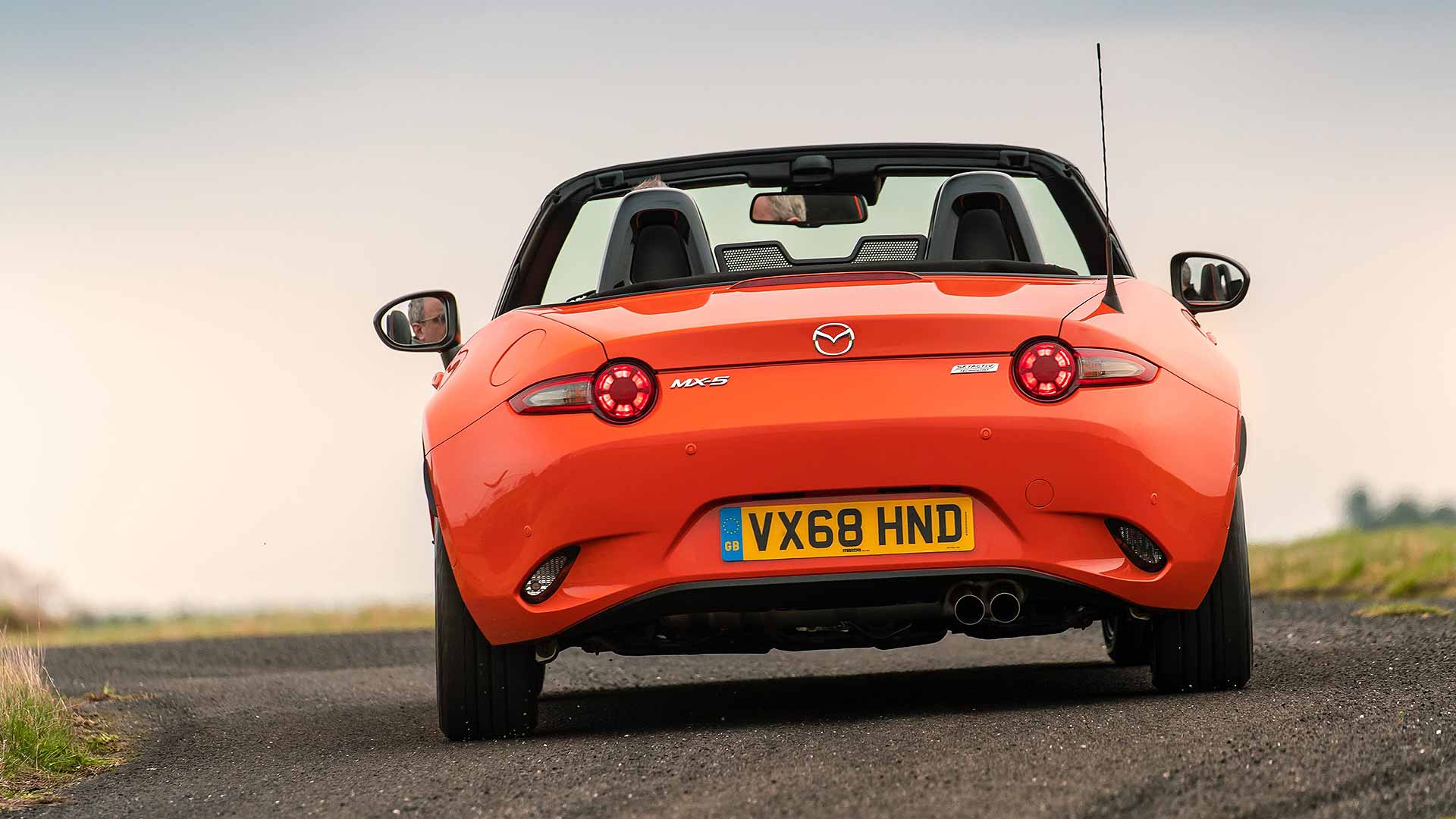 Occupants sit low, and far back, with a long bonnet stretching ahead. The driver gets a great view over it, angular wings rising either side to pinpoint the centre-line of the tyres. Of course the roof should be open: Mazda says there’s a small preference for the convertible MX-5, which has a fabric roof that drops down in seconds. The RF version costs more, its automatic hard-top roof takes longer, and it opens up less of the cabin. 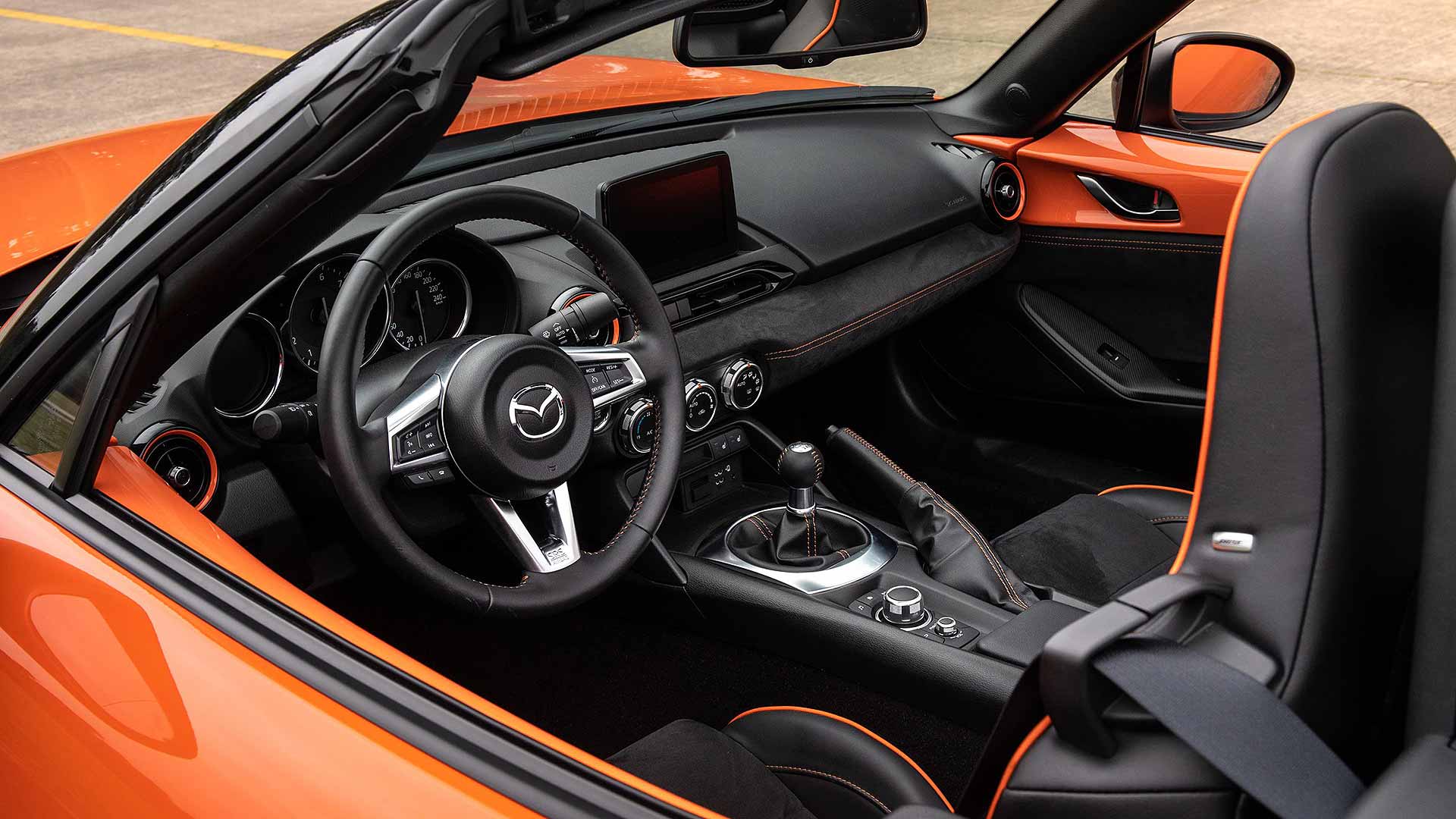 Racing Orange paint aside, 30th Anniversary models also get lightweight forged RAYS alloy wheels, Brembo brakes with orange calipers and, inside, orange detailing for the seats, door trim, dashboard, steering wheel, air vents and gearlever. Recaro seats are trimmed in Alcantara and Mazda chucks in Apple CarPlay and Android Auto for free, too. The fact that each car – 370 convertibles, 180 RFs – has an individual serial number is the icing on the cake. 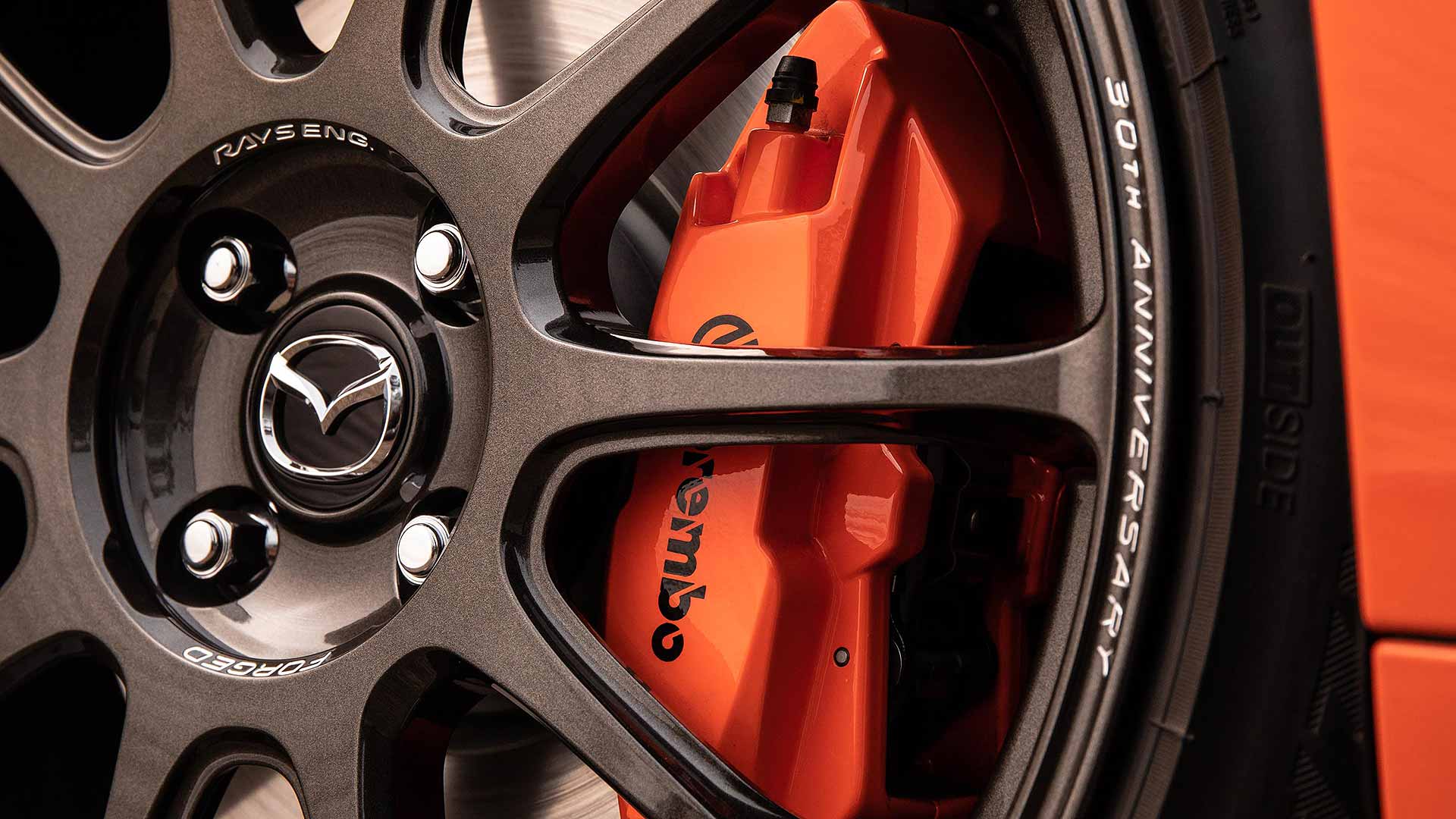 Driving any fourth-generation MX-5 is joyous, but this special edition is particularly so. Being based on the top-spec MX-5 brings Bilstein suspension dampers, a strut brace and a limited-slip differential, so it has an exotic spec sheet. Mazda has set all this up flawlessly to produce a friendly, interactive, genial car that is always on your side and ready to raise a smile.

It is delicate, adjustable and floods you with feel and feedback. Compared to a hot hatch, it almost feels over-soft, as the body rolls in corners and the suspension is supple over bumps. This, however, is because it’s so light, meaning Mazda hasn’t had to battle with managing excess weight. Best driven with fingertips, it’s nimble and flows beautifully, feeling exactly like the 1960s throwback Mazda intended since day one. 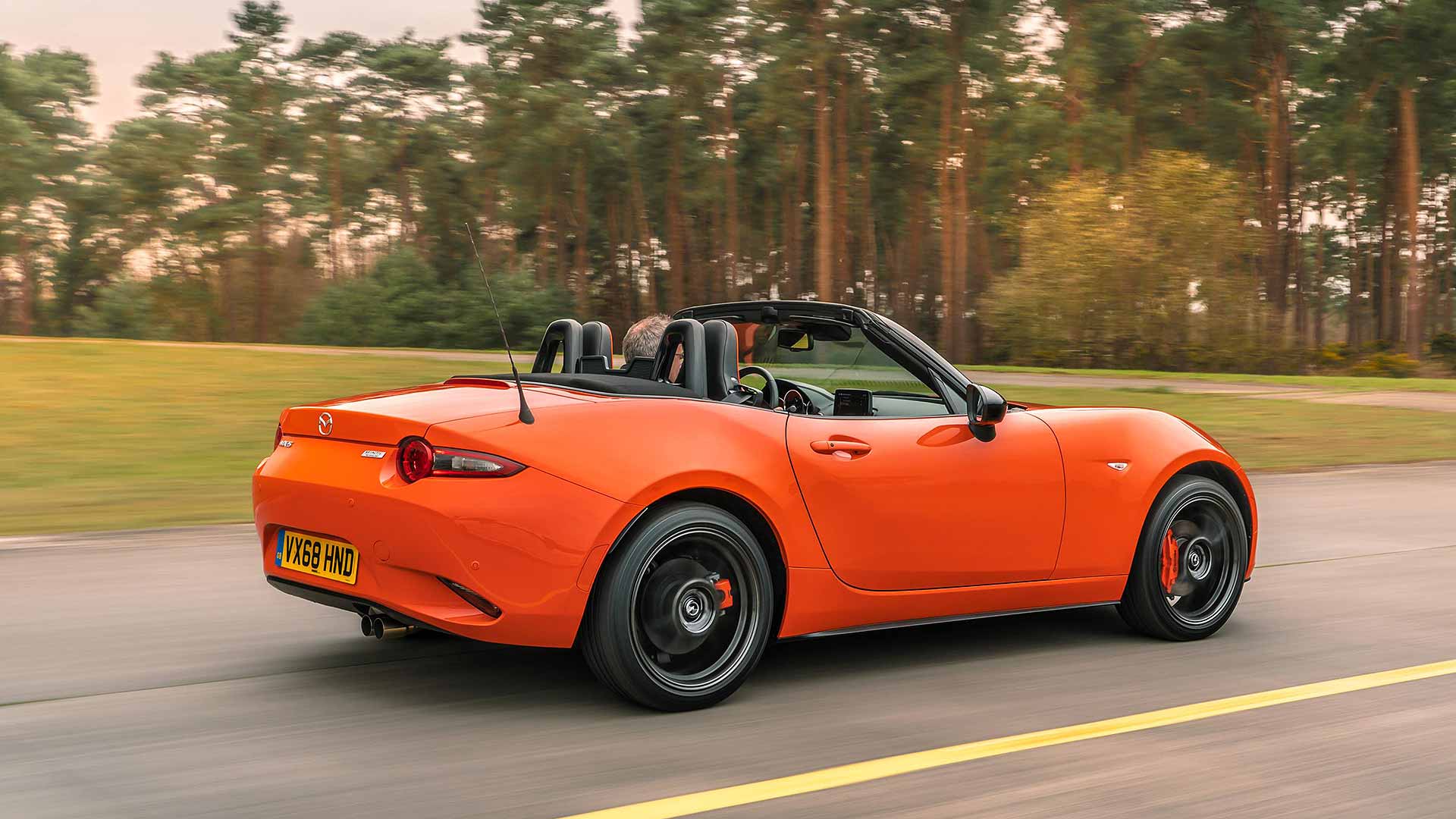 Press us, and our preference is for the convertible, pictured here. The RF looks cool, like a 1960s coachbuilt special. But it weighs a tiny bit more and somehow doesn’t feel as pure. Those extra 42 extra kilos are presumably located higher up in the car, comprising glass, metal and electric roof-fold kit. They just take the edge off the balance – not all the time, granted, but drive them back-to-back and it’s the convertible that’s more immaculate, more of the time. It also throws more wind into your hair and sun on your neck. 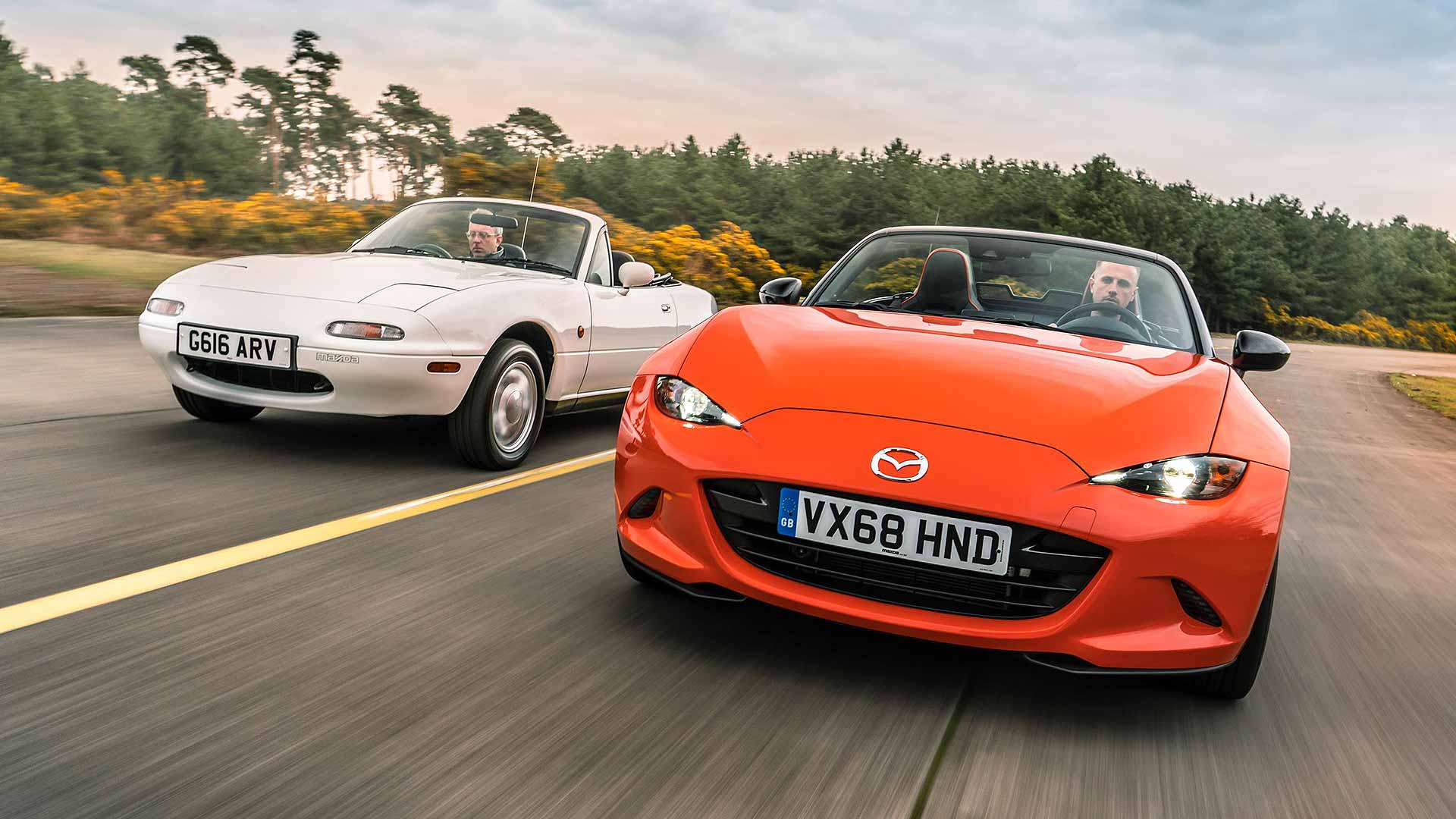 Mazda has sold 1.1 million MX-5s since its launch in 1989 – 134,000 of them in the UK alone. Brits love the Japanese interpretation of the classic British sports car and this 30th Anniversary model, the finest one to date, is the perfect way to celebrate. But although we’ve been granted the single largest allocation of any global market, the warning at the start of this review remains: there are already only 275 of them left in the dealer network. And counting down…