The Mazda MX-5 turns 30 this year, so now seems a good time to put the quintessential sports car – in its latest, greatest form – through its paces 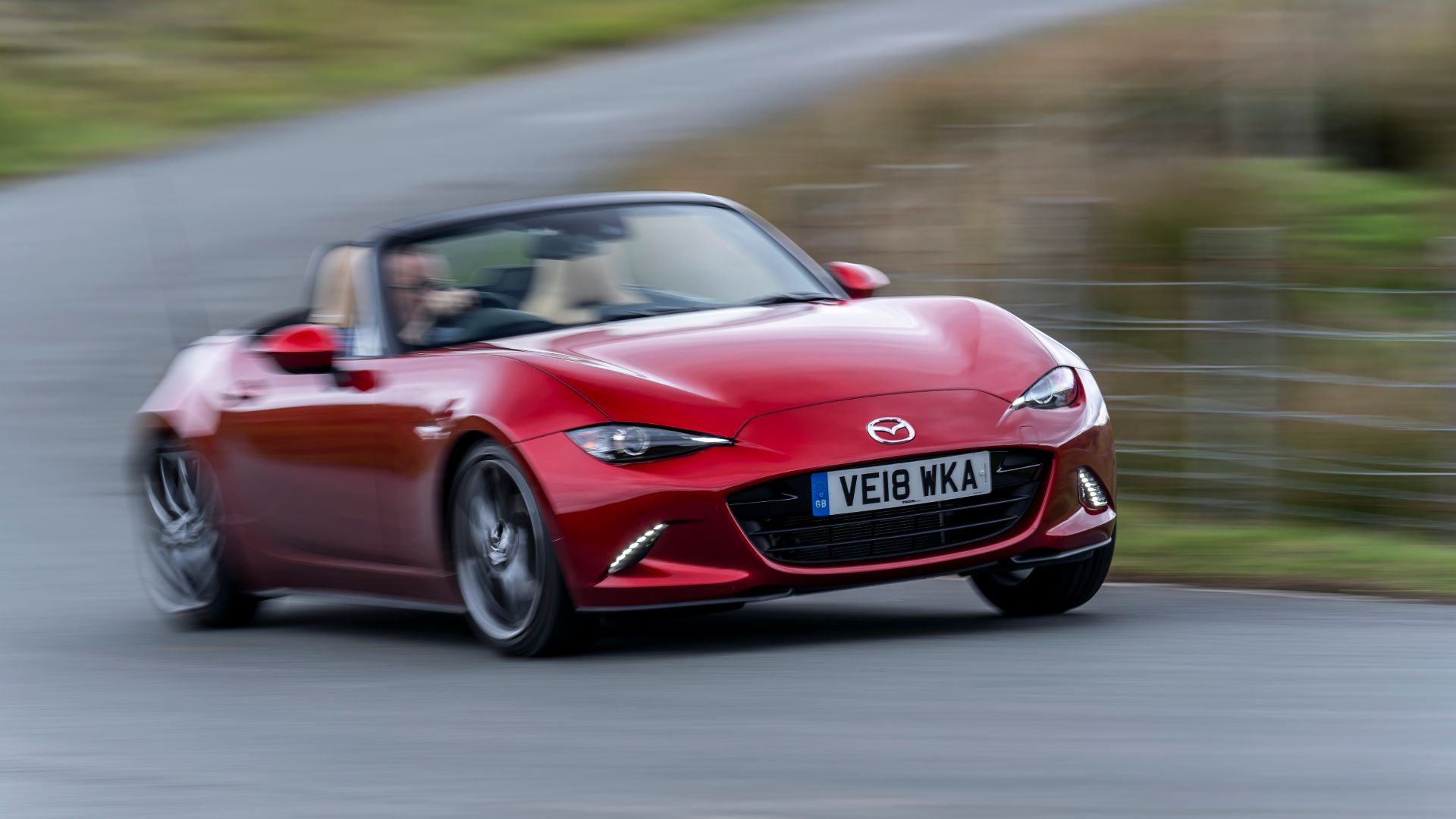 The Mazda MX-5 turns 30 this year, so now seems a good time to put the quintessential sports car – in its latest, greatest form – through its paces.

The MX-5 is the Japanese marque’s love letter to the Lotus Elan. That is to say, the sports car distilled into its most basic form: as little weight as possible, an engine in the front, rear-wheel drive and an open top.

Over four generations the Mazda has, for the most part, gone without direct rival. The third-generation Toyota MR2 came closest, offering a similar, stripped-back sports car experience. The MR2 was, however, an altogether more challenging drive, thanks to its mid-engined layout.

Nonetheless, the MX-5 has always commanded respect from hardcore car enthusiasts and casual drivers alike, despite its slightly effeminate image.

Personally, I’ve never been spellbound by it. I always read ‘slow’ when the ‘you can use all the power’ cliche was rolled out in road tests. The original cars also seemed spartan for spartan’s sake – I’ll catch hell for even suggesting that might be a bad thing. 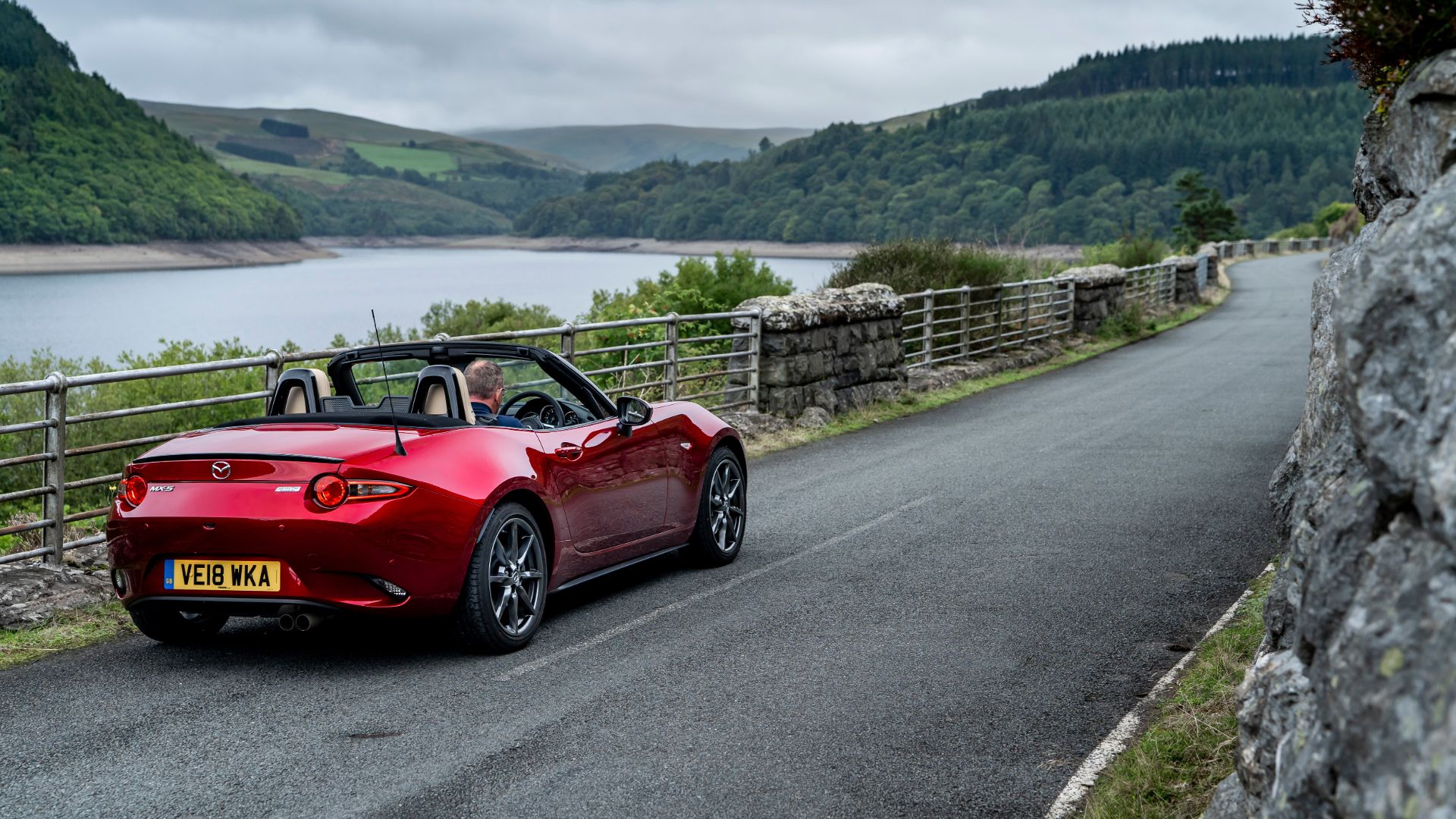 The current car, first introduced four years ago, now has more muscle in the form of an uprated 184hp 2.0-litre four-cylinder engine. The 1.5-litre motor is still available and comes mildly revised, with 132hp. Both six-speed manual and automatic gearboxes remain, although the auto is available with the folding-hard-top RF only.

The full list of trim levels is expansive. We kick off at SE+, through SE-L Nav +, Sport Nav + and GT Sport Nav +.

In theory, that’s many of my personal issues with the MX-5 resolved, then – some power to speak of, and equipment and appointment beyond windows that wind down and a radio. But what about the looks? 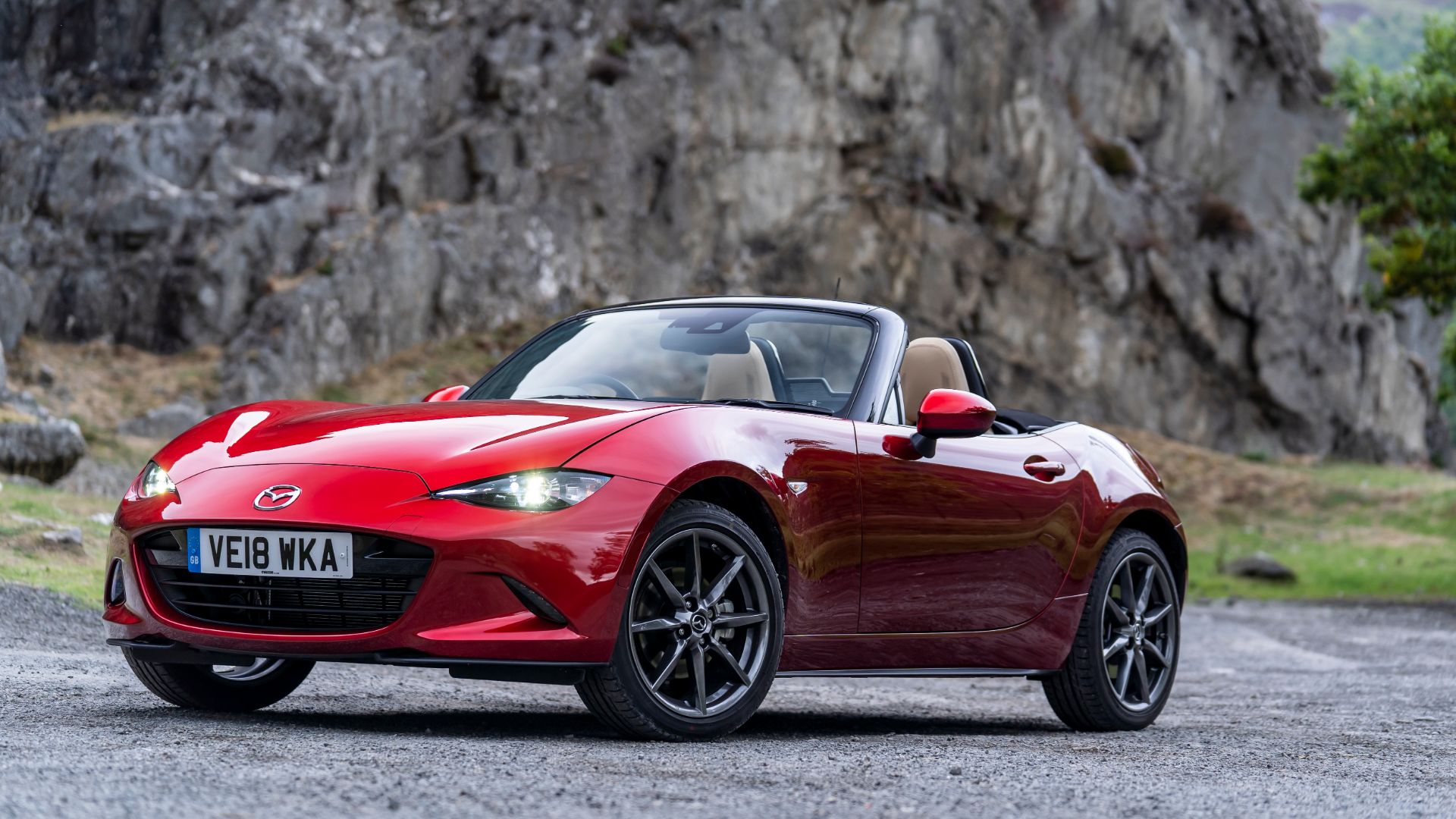 The fourth-generation ‘ND’ MX-5 has received more than its share of styling accolades, and for good reason. Compared to soft-edged third- and second-generation models, it’s a revelation of sharp lines and taut proportions. Few other cars pull off quite such a combination of diminutive size and muscular styling.

We’ve got to mention that Soul Red paint, too. It’s got to be one of the nicest colours on sale. Yours for £790.

Inside the Mazda MX-5 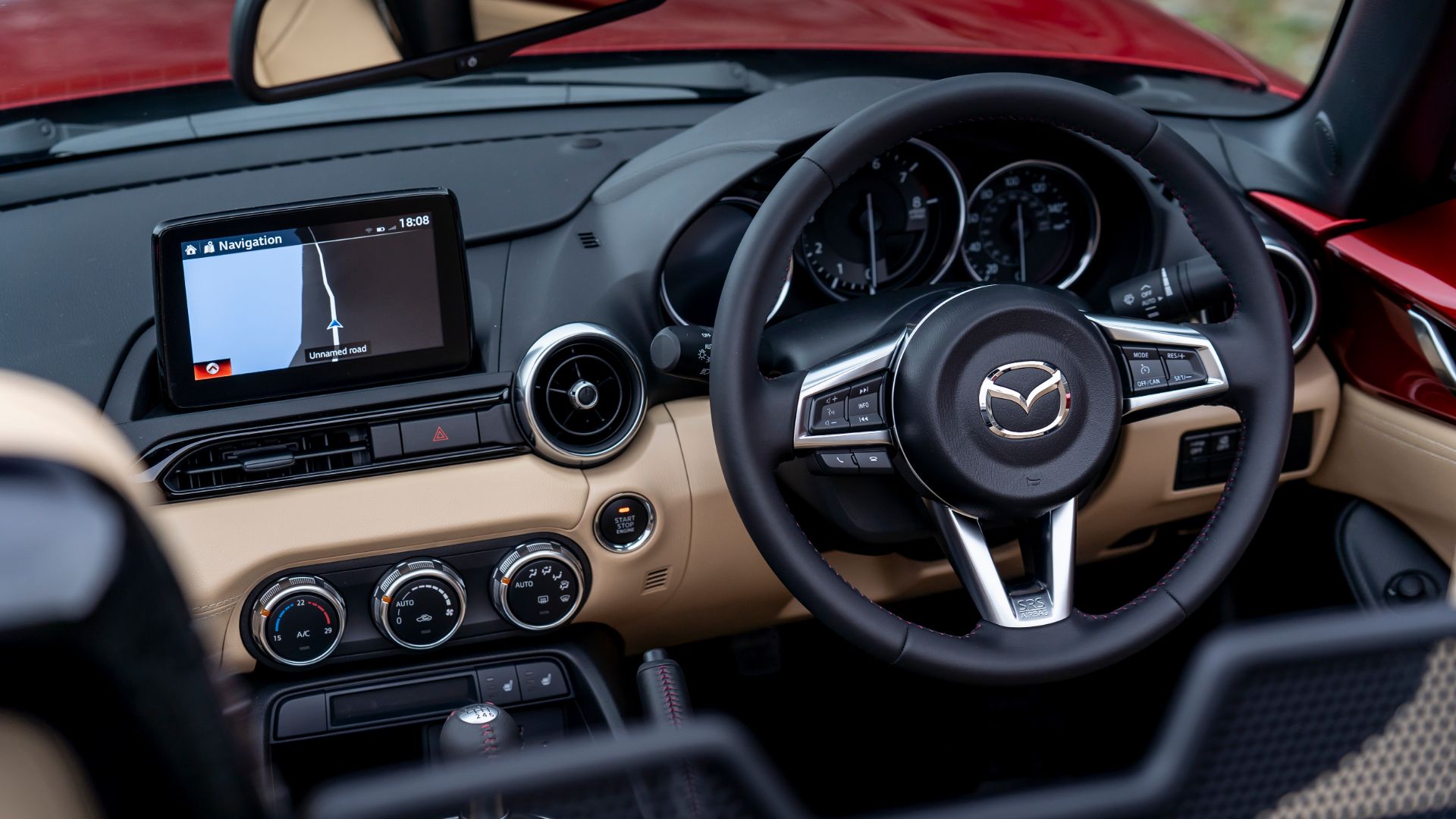 On the inside, prior iterations (especially early ‘NA’ and ‘NB’ cars) were basic and uninspiring in terms of design, quality and equipment. The current model aces all of the above. Gone is the old tombstone centre console and basic dials. In its place are sophisticated and intriguing shapes, a decent infotainment screen and just the right amount of buttons.

What made the old cars an event remains, however. The MX-5 has the feel of an exotic aperture that you have to collapse into – more McLaren than Mazda. Once you’re in, it’s snug but perfectly thought-out. You’re borderline vac-packed, but nothing digs into you or rubs you the wrong way.

What is much nicer, is the quality of materials and design of the cabin. Our car had a very arresting tan and black leather interior, which went very well with some of the red exterior highlights that bleed into the cabin.

The cupholders are, admittedly, an afterthought. At least they can be popped out and installed in areas where your elbows won’t dislodge them. 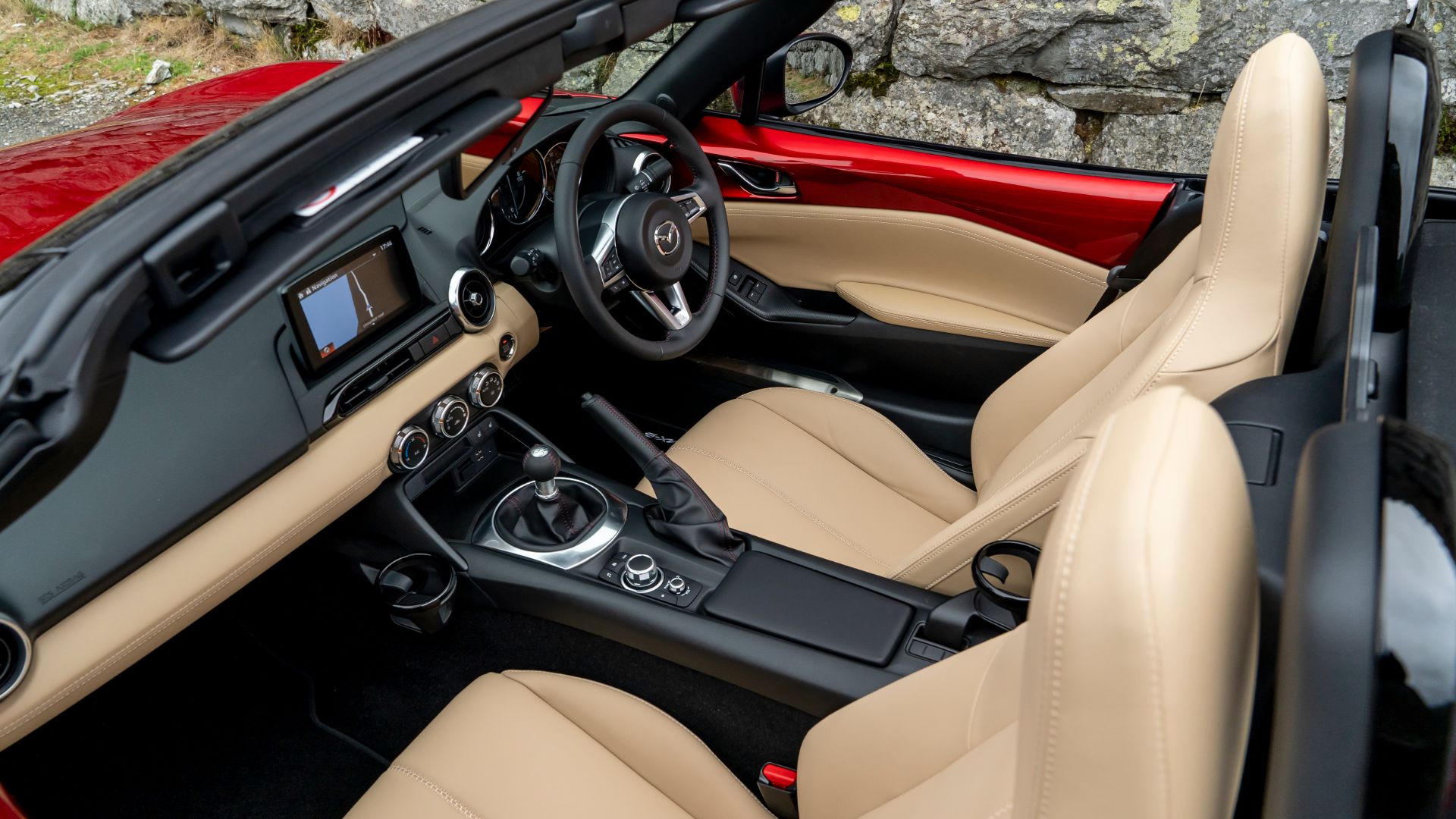 Equipment-wise, it’s a revelation. Seat-heaters, Bluetooth, a strong stereo, cruise control and auto lights go a long way towards refining what has, in the past, been something of a rough-around-the-edges proposition.

That’s the thing would-be-helmsman journalists forget about these little cars. One of their main jobs is to be an amenable cruiser. A basic and stylish car for folks who don’t need a hatchback and want a bit of wind-in-the-hair fun. There’s a reason they were named ‘Roadster’ back in the day.

The boot is what you’d expect: inadequate to anyone used to hatchbacks, sufficient if you’re an efficient packer. The infotainment does the job – it’s easy to suss out and swift in its operation. You can control the seven-inch centre screen either with your fingertips or a clickwheel on the centre console. 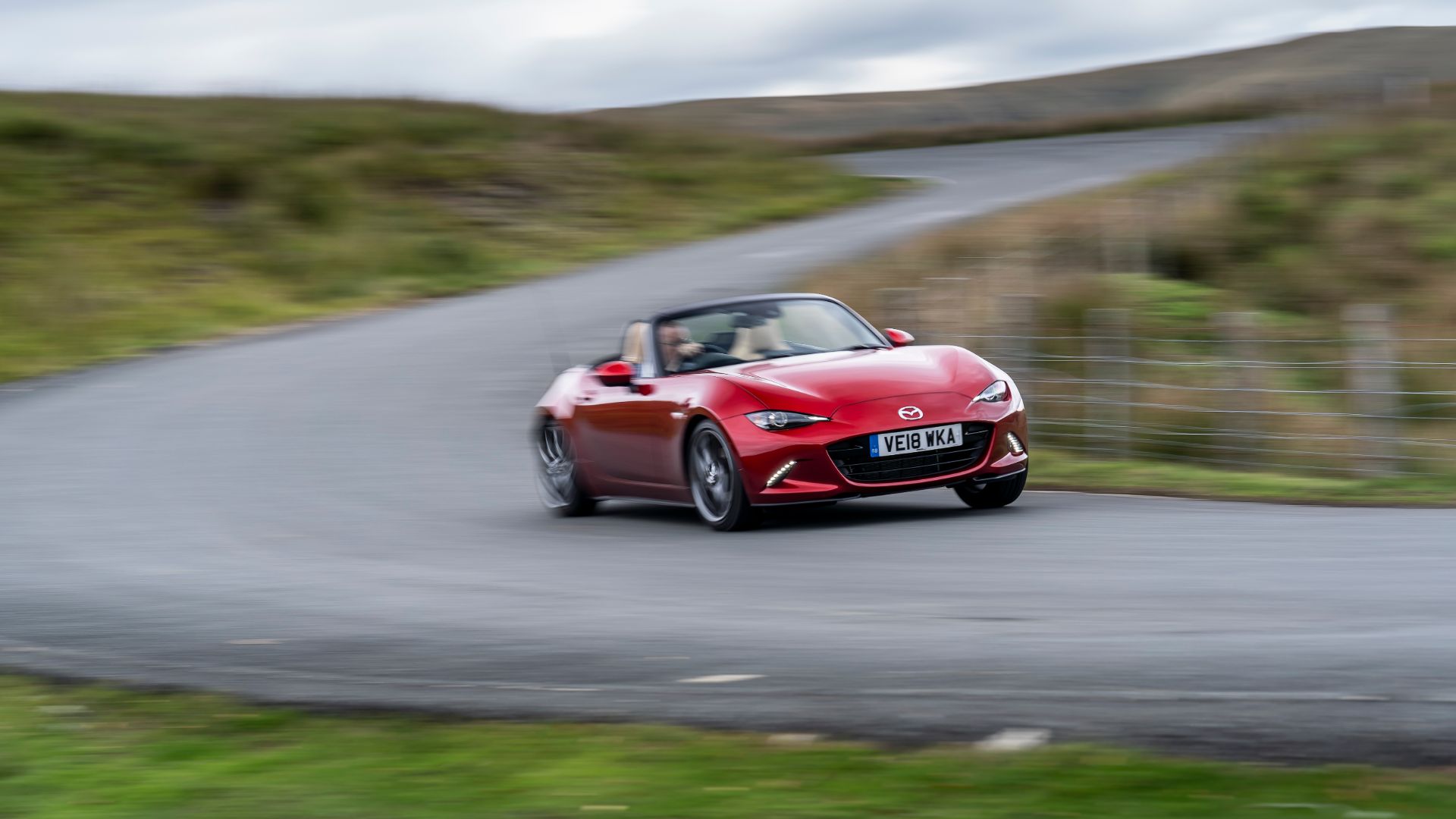 The not-so-breaking news is that the MX-5 is as good to hustle as it ever was. The car shrinks around you and you’re soon comfortable placing it on the road. The steering is well-judged and rich in feel, while the gearshift elicits more gun-reload clichés than you can throw a B+ script editor at.

The pedal positioning takes some acclimatisation, but you’re soon firing through rev-matched shifts like it’s going out of fashion.

Let’s talk about the MX-5’s slightly roll-tastic handling. Sometimes, you wish for something a bit more tied-down and sophisticated. The rest of the time, and by that I mean 80 percent of the time, you’re thankful for suspension travel and compliance dispatching most of what Britain’s smashed roads can throw at you.

Never have I driven anything that takes care of the notorious fen roads where Norfolk and Cambridge meet with the deftness of the MX-5. It allows you to enjoy more, for more of the time. It rotates benignly, but will bite if provoked; every bit the helmsman’s training wheels. 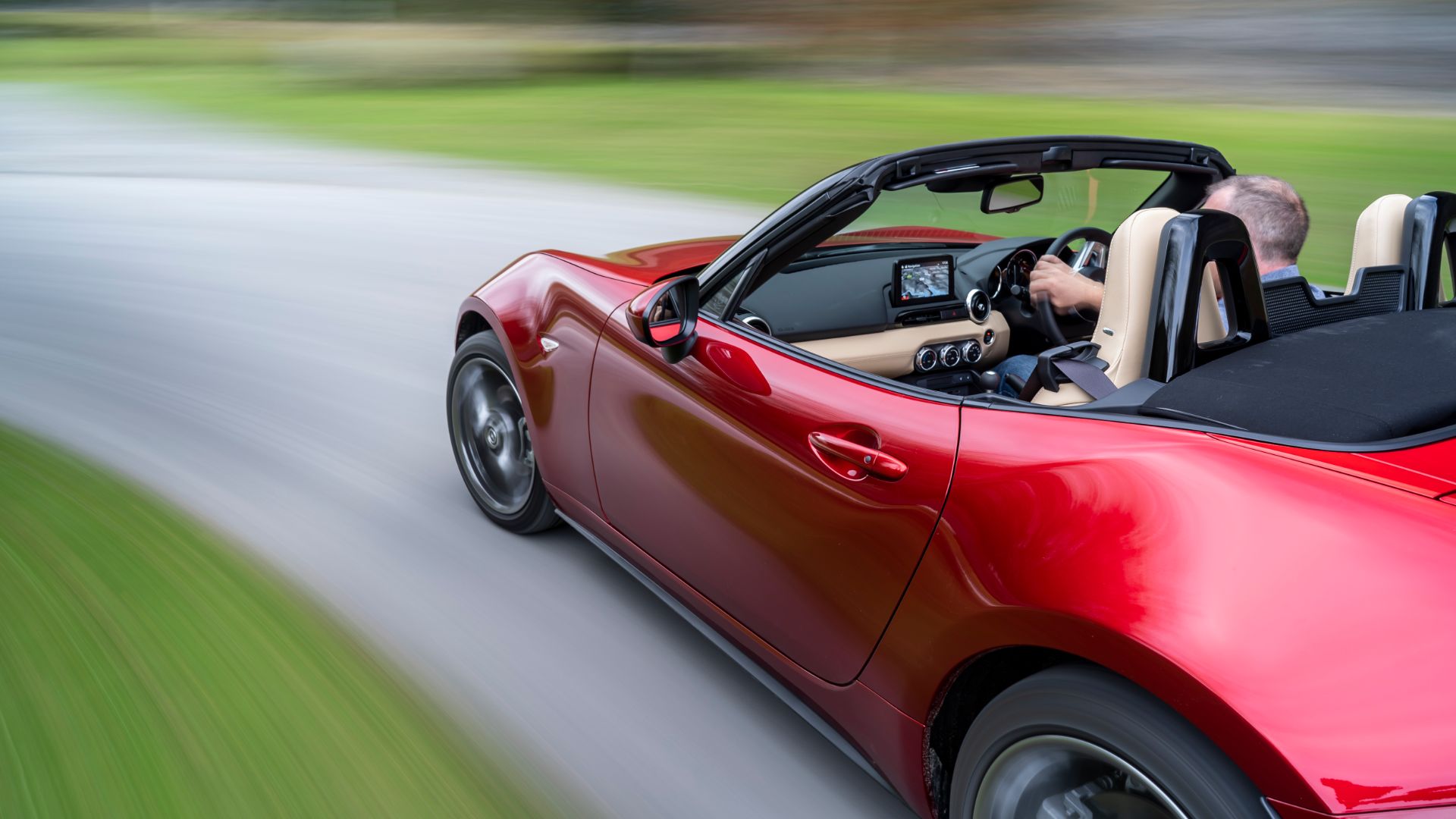 What is revolutionary for the MX-5 is a little bit of new-found muscle. In years gone by it’s been routine to swap out engines, turbo or supercharge the existing twin-cam, or else be vulnerable to the accelerative whims of diesel hatchbacks. Now, the new 184hp 2.0-litre engine gives the updated-for-2019 car the grunt it always deserved.

It’s a willing, rev-happy engine, too: enjoyable to wring out, and you’ll make serious progress when you do. The flip-side is you find yourself going quicker, and therefore notice the roll more in corners.

When you’re not in Sport mode, that topsy-turvy handling suddenly becomes a disarmingly compliant ride and you get 40mpg on a cruise. Then, the toys come in to play. A couple of two-hour night drives up and down the A1 set a stage upon which the MX-5 greatly impressed. Cruise control mitigates leg-ache, while the automatic lights that split the high beams take another job off your plate.

The easy-to-set-up Bluetooth system channels Spotify from your phone like a dream. The three intensity settings on the heated seats range from positively nuclear to a mild summer haze – excellent. Such amenities are transformative for a car that, in past iterations, was very basic. 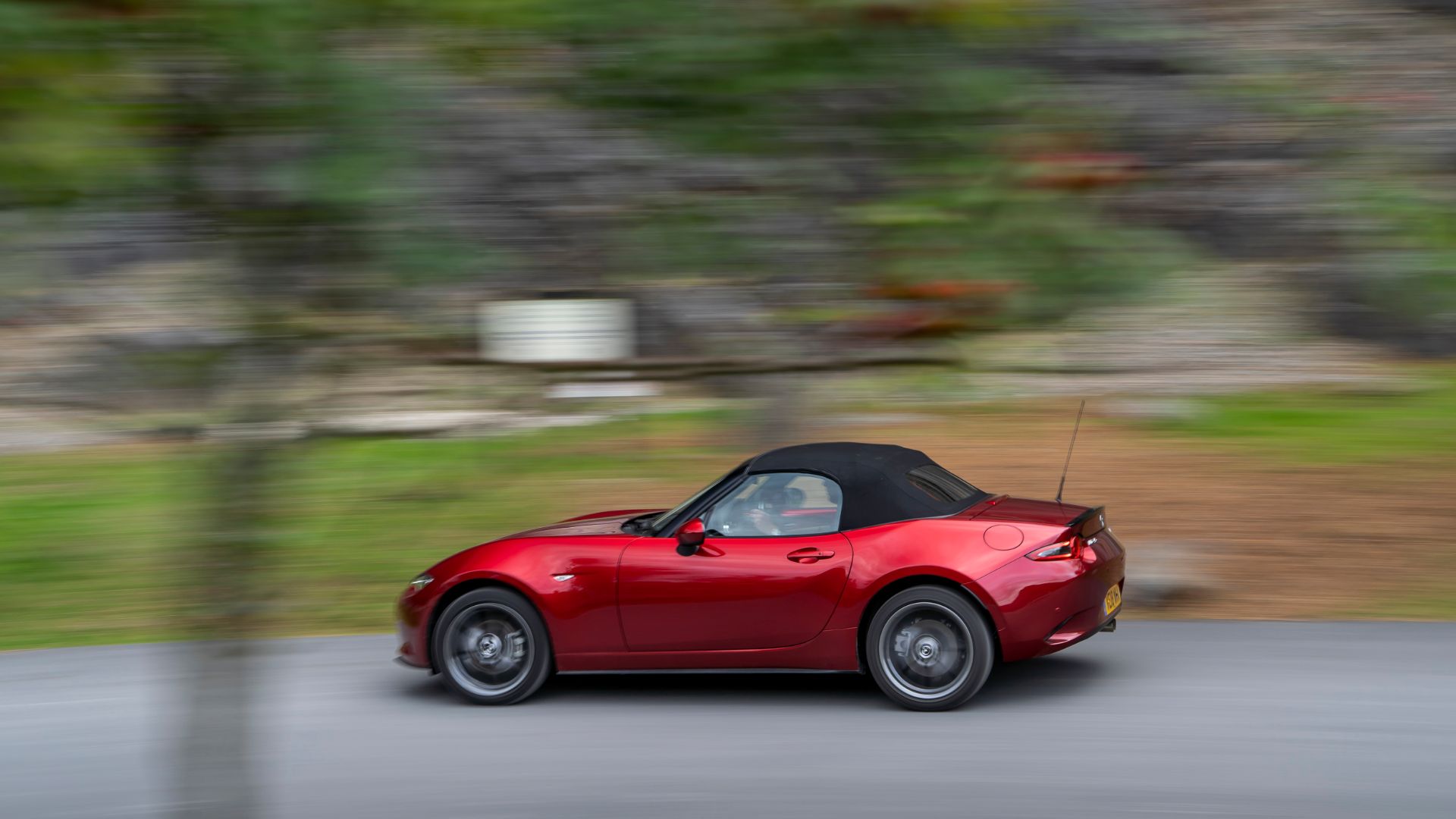 Thirty years on from this car’s debut, the ultimate factory MX-5 is here. It’s the very best driver’s example, adorned with the creature comforts you want, looks that kill and driving manners that charm on a daily basis.

This latest model is everything anyone has ever wanted the Mazda to be – from adenoidal owner’s club diehards to uncompromising softies (like me). The added punch helps it come alive, while the interior amenities and improved quality make it much more appealing.

Yes, there are more sophisticated sports cars in terms of body control, roadholding and outright speed. But in the UK, as you can only find out by experiencing it, that doughy body control is often a blessing. 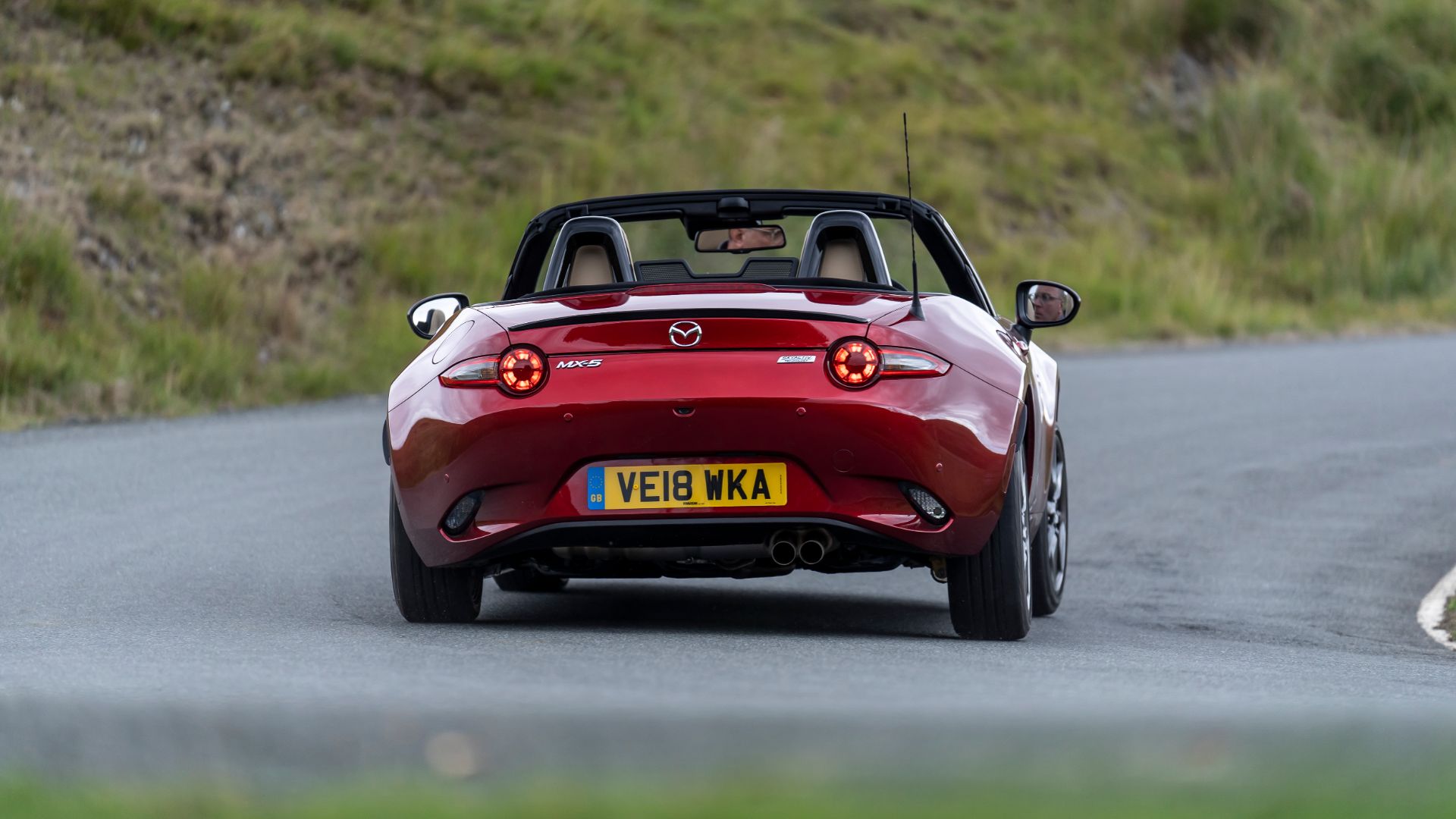 Overall, I was very taken by the latest MX-5. It very deliberately addressed a lot of what the very few MX-5 detractors in the world have always had against it. Better quality, sharper looks, real performance and generous equipment levels.

What I will say is to be careful and know what you’re buying. This is not the last word in performance motoring. Actually, quite deliberately, it’s more like the first. If it’s what you want, the latest MX-5 is the best yet. 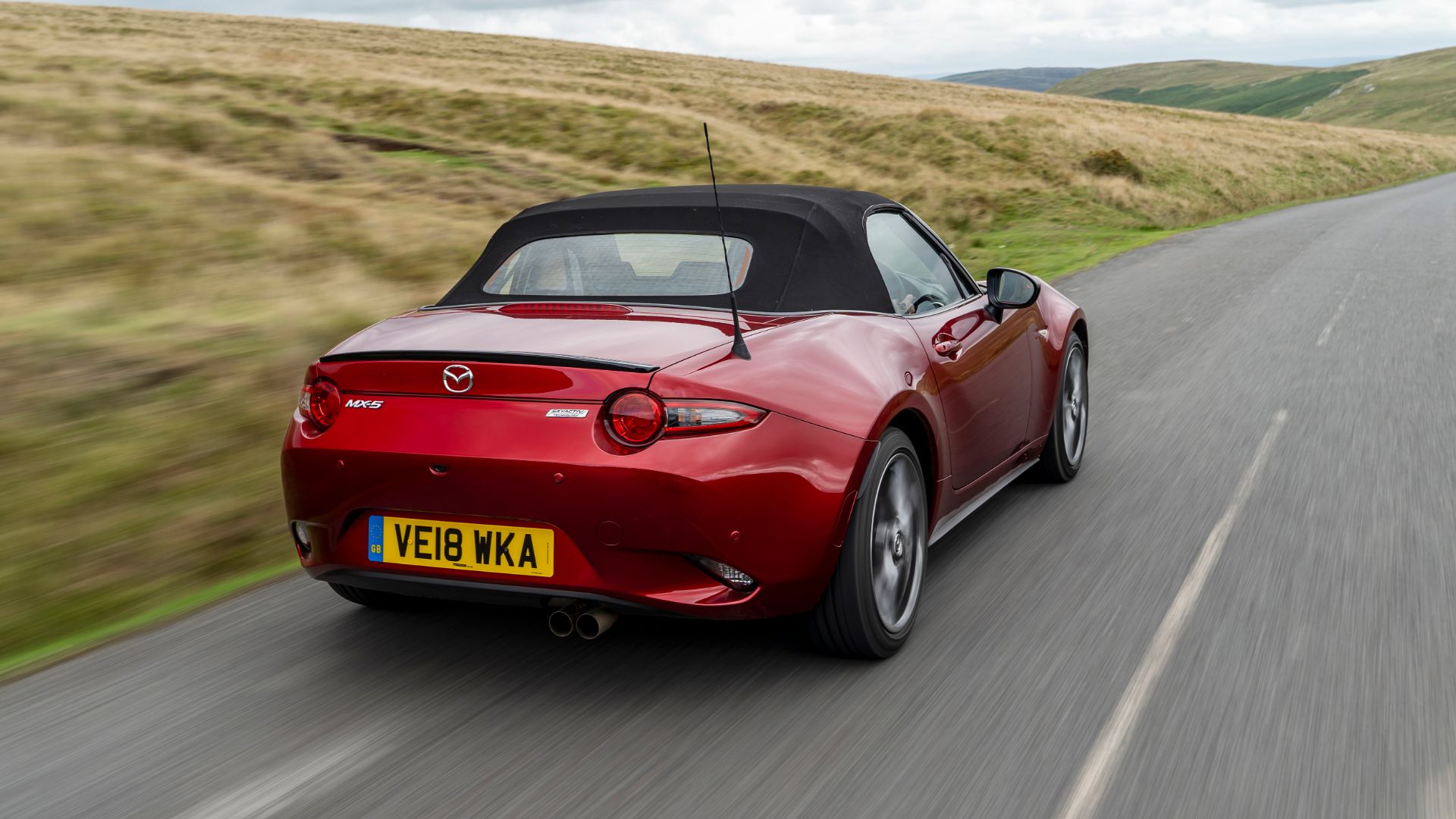 Which engines does Mazda offer with the MX-5?