Ignore the ill-informed headlines: diesel does still have a place 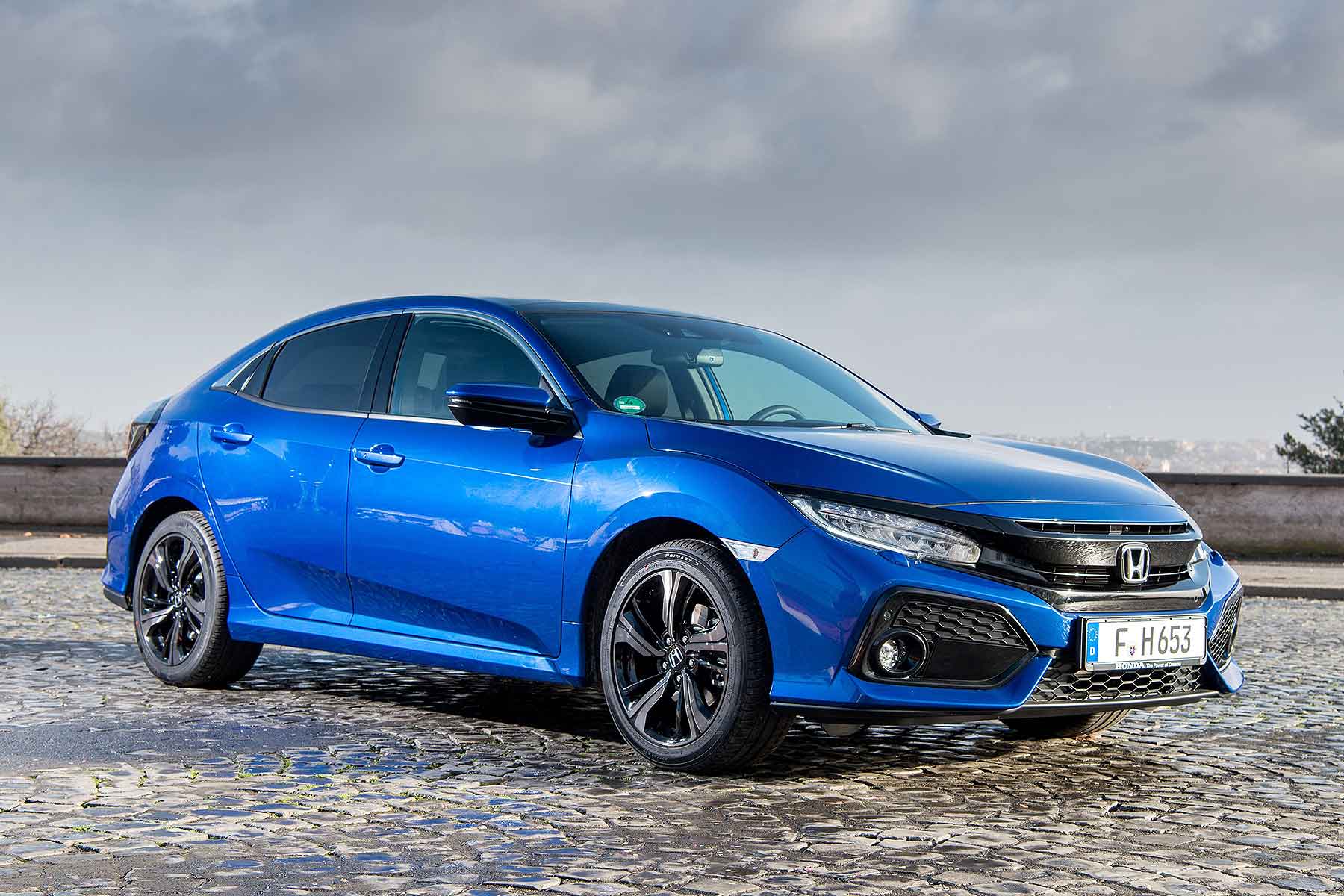 Thanks for reading. Some may not even have got this far. Diesel is enemy number one as far as many influential (or simply loud-mouthed) people from the Treasury down are concerned. Who in their right mind would willingly now buy one?

Why, a sensible 40 percent of the car buying public, that’s who.

Yes, diesel might no longer be the fuel of the future, but it’s probably the best choice for those seeking efficiency today and for the foreseeable. Only if your daily driving fits a very narrow set of parameters will an electrified car be for you, while petrols and even hybrids will almost certainly consume more fuel than a diesel.

All new diesels also have to be Euro 6 emissions compliant, and the new ones launched from now are being subjected to the tough new WLTP fuel economy test – which includes real-world on-road emissions testing, just to be doubly sure car makers aren’t ‘doing a VW’ and cheating the lab tests.

Diesels have never been cleaner or greener. Which is why Honda’s so happy to be launching its new Civic i-DTEC diesel, in spite of all the negative headlines. It is more fuel-efficient than the old car, puts out less CO2, puts out way less NOx emissions and exhaust particulates, and is now on sale from just over £20,000.

The 1.6-litre turbodiesel is a revised version of the existing motor, equipped with a diesel particulate filter, a NOx filter (that doesn’t require AdBlue additive top-ups), and myriad detail tweaks that make it smoother and more refined than before.

There’s pent-up demand for this diesel Civic. Honda’s steered some eager buyers into turbo petrols, but others have simply preferred to wait: they know only a diesel will give them the fuel economy they demand. Has the wait been worth it, and will those people who ignore the headlines be rewarded for their free-thinking commonsense? 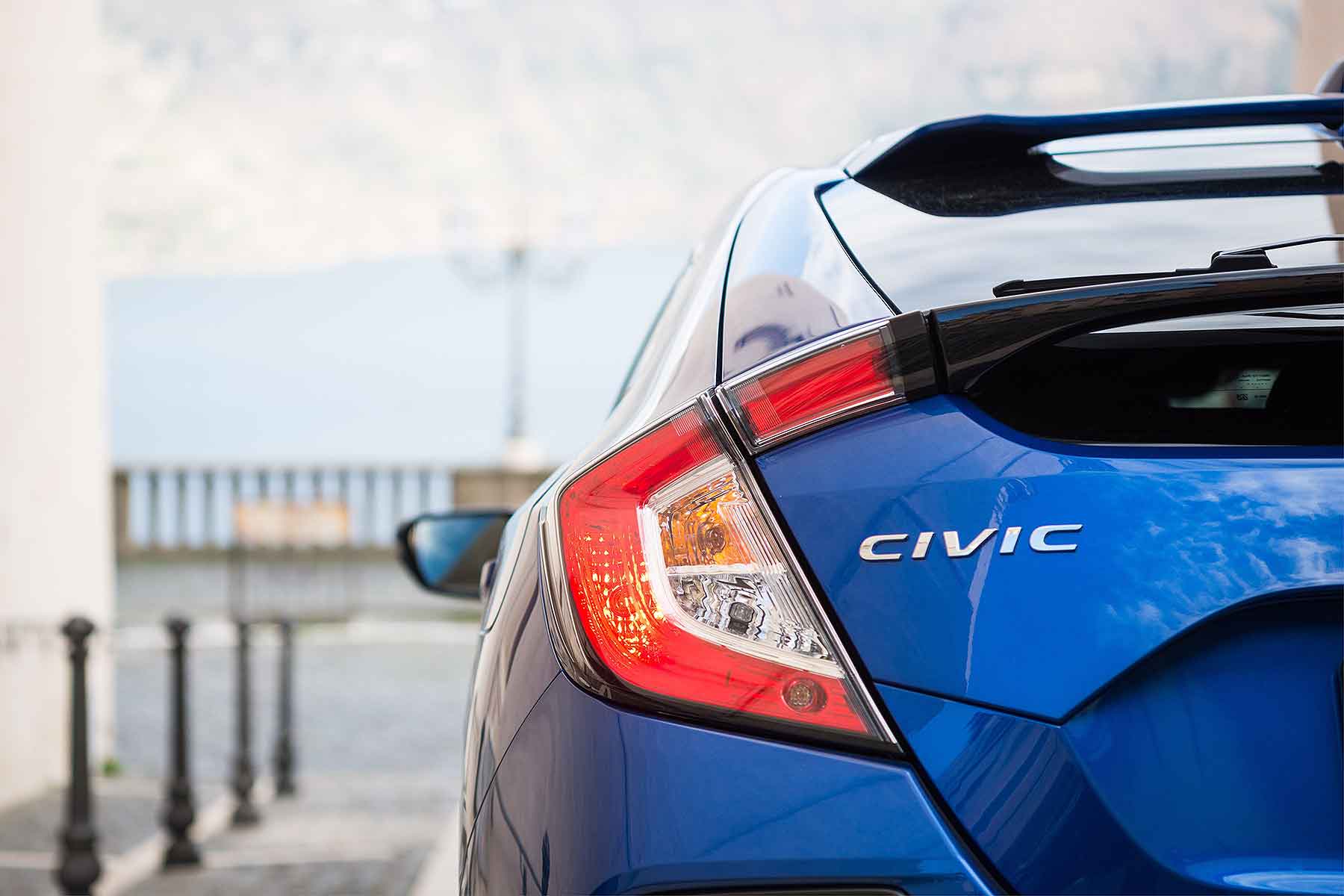 There’s no diesel badge on the back of this diesel Civic. And it’s much quieter at idle, with little tell-tale rattle, so only those with the keenest hearing may detect it’s a diesel. Your dirty (clean?) little secret’s safe with Honda.

Uncorrupted are thus the latest Civic’s punchy looks. It’s a bold, distinctive car; Honda’s not been afraid to push the sportiness with some of the angles and bulges. The front end is broad – cars with the black pack trim wear it best – and I love the chunky rear arches and raked rear screen. Oh, and pleasingly, this is another generation of Civic with a floating rear spoiler. 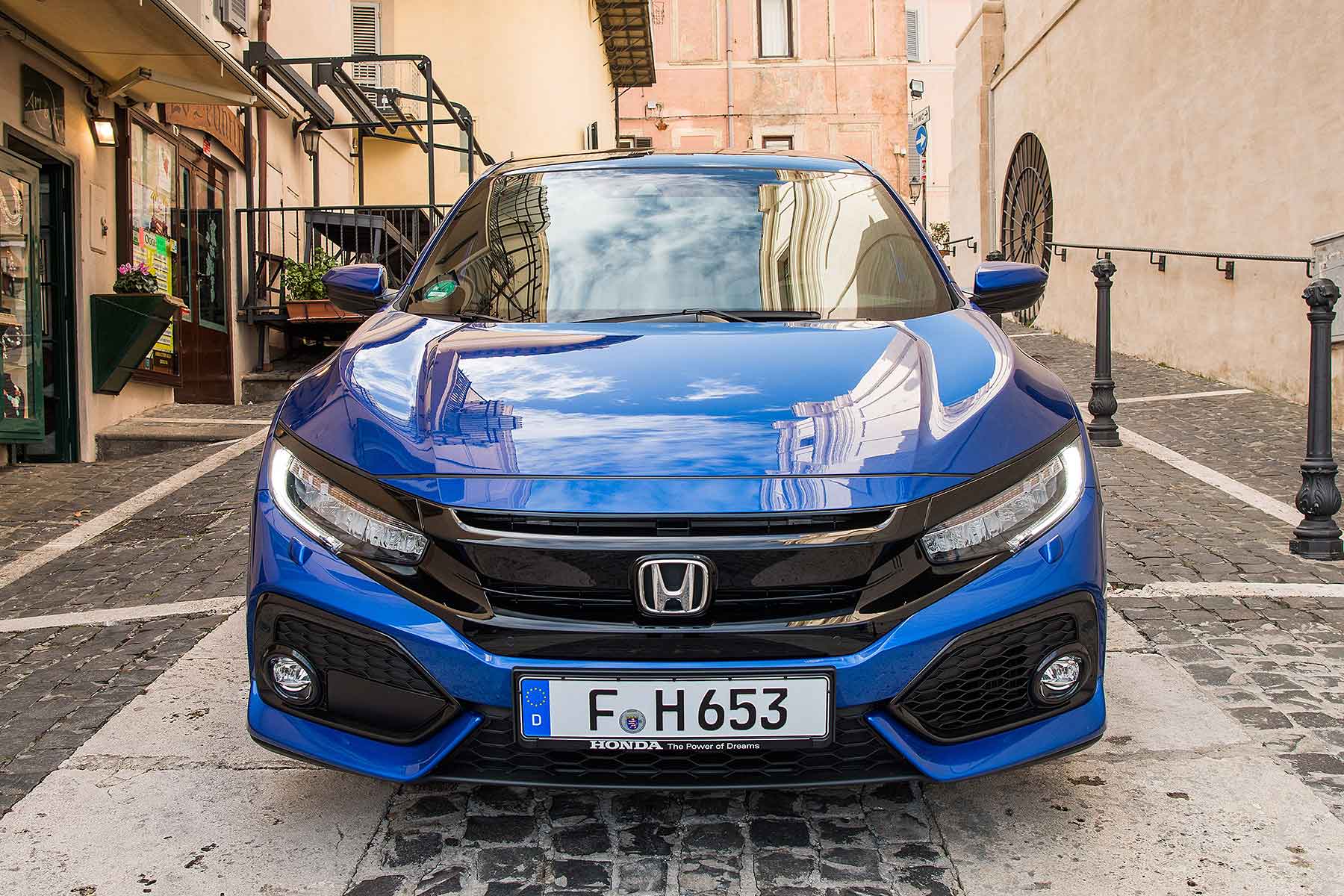 Even S and SE models manage to not look plain or paired back, though the Civics you really want are the SR or, better still EX (both have 17-inch alloys, rather than the malnourished 16”s on the other two). To these eyes, the best colour is Brilliant Sporty Blue and the Black Line pack is a must-have: it adds front chin spoiler, side skirts and rear diffuser. 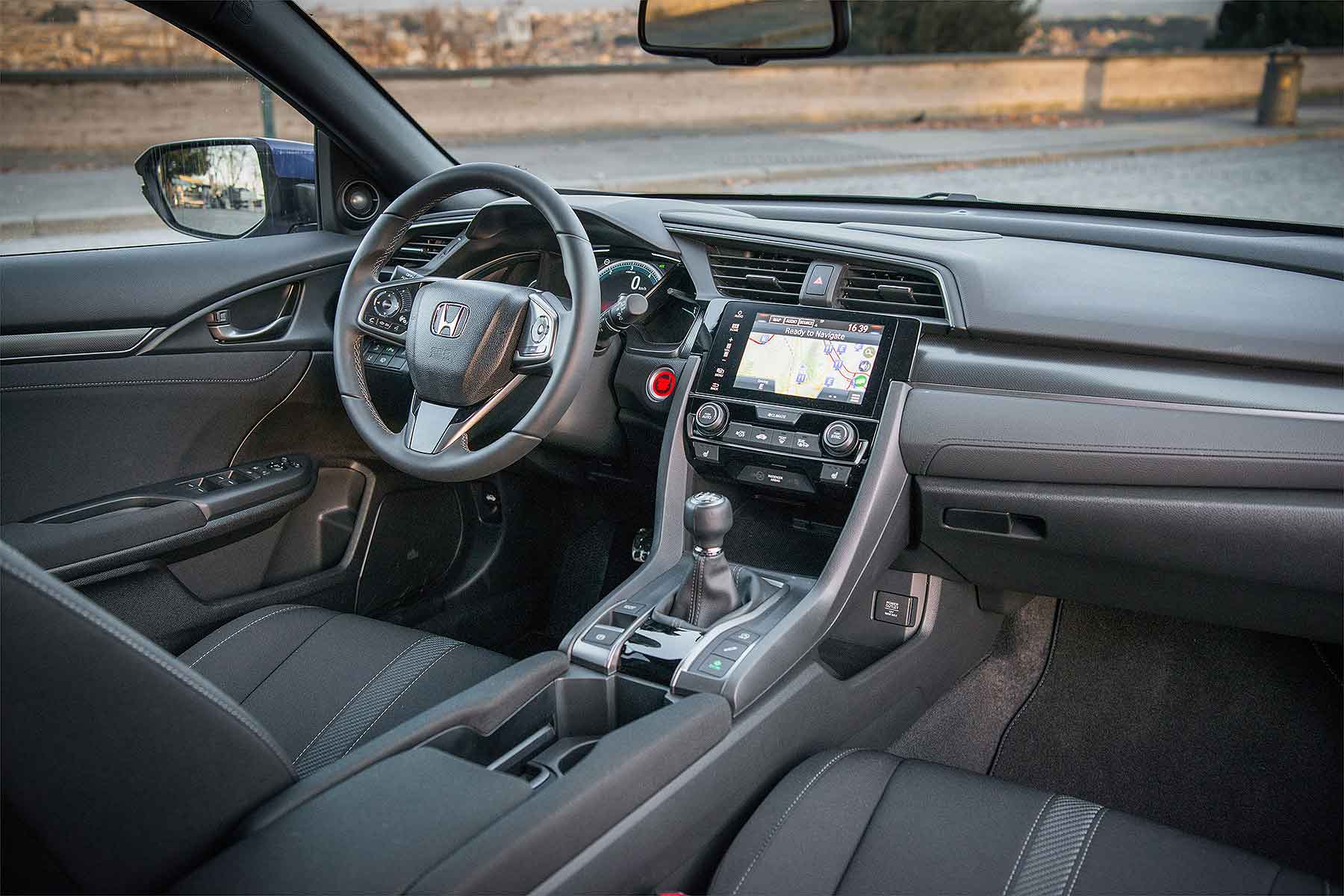 Relocating the fuel tank away from below the front seats means they can be positioned low – really low, if you want. You can drop down into it almost like a coupe, with a high centre console to your side that’s perfect for elbows. The stubby gearlever is also well-located. It feels right from the off.

The driving position is perfect and although the seats aren’t the hip-huggers you get in a Type R, they’re not bad. The digital dial pack is interesting (Honda’s jammed a lot of lights and displays in there) but the freestanding touchscreen infotainment in the centre is aged and not up to contemporary expectations. The saving grace is standard Apple CarPlay and Android Auto.

This Civic doesn’t quite have the MPV-like feel of the old one in the rear, but there’s a lot of space there, and it’s a comfortable place to sit. Decent boot too, 414 litres even with the seats up, which is 34 litres more than a Volkswagen Golf. The side-mounted retractable load cover is a little slice of genius. 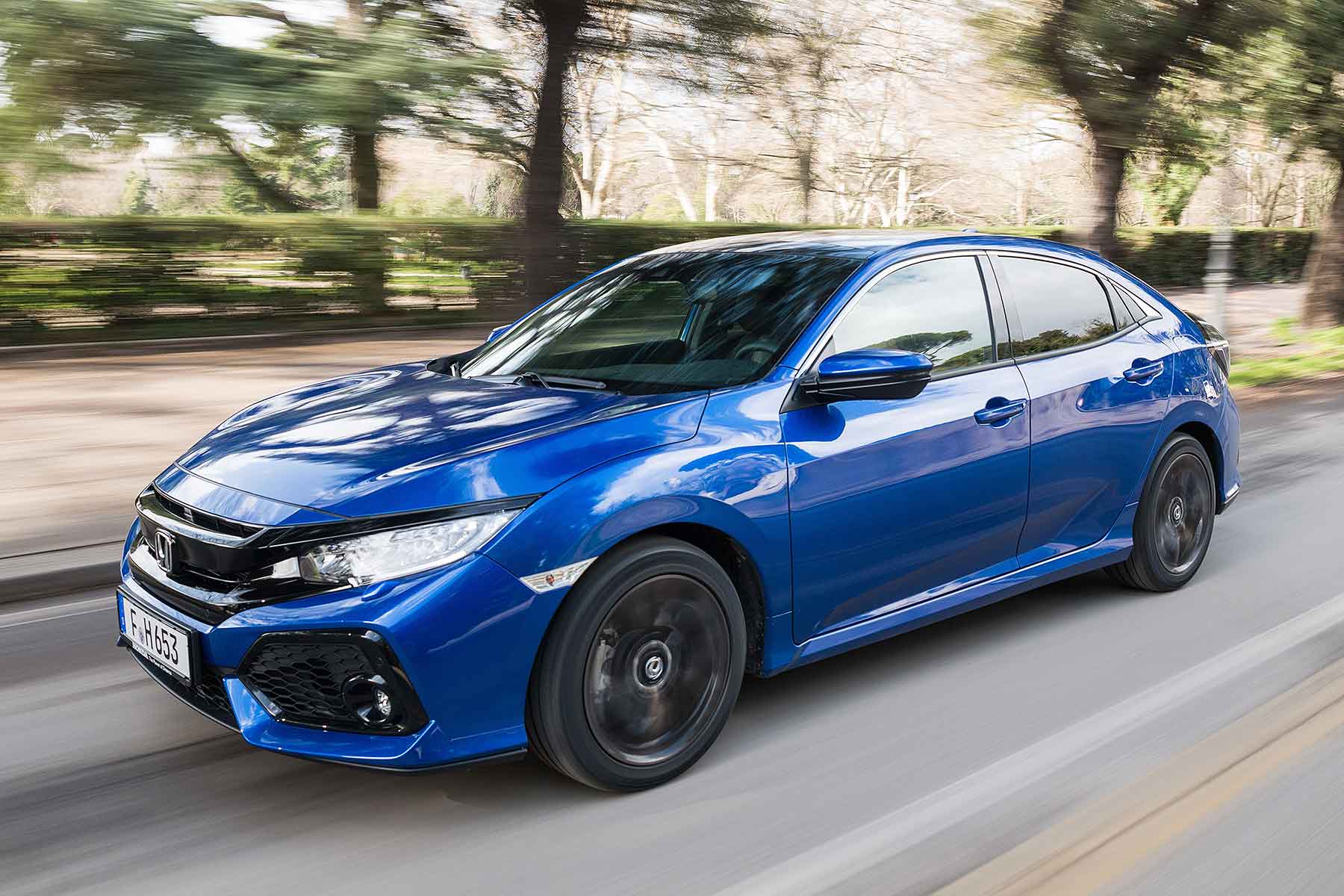 Don’t tell your passengers that it’s a diesel and, so long as you don’t gun it through the gears, they may never know. That’s how much more refined this new Civic diesel is compared to the old one, and even compared to a fair few of its modern rivals.

Sure, it will rev through, and become gruff if you stray to 4,000rpm and above. Aggressive take-offs will also elicit a drone. But that’s not how you drive diesels to their best; if you want to do that sort of stuff, get one of the revvy petrols. Diesels, lest we forget, are about relaxed pulling power and low-effort press-and-go. The Civic diesel does this well.

It doesn’t quite have the surge of, say, a VW Group TDI – 221lb ft of torque is no more than adequate, and Honda admits it was concentrating on emissions and refinement rather than adding any more power or potency with this evolution. It’s handy enough though, and more than up to scratch for a 120hp mid-range diesel. 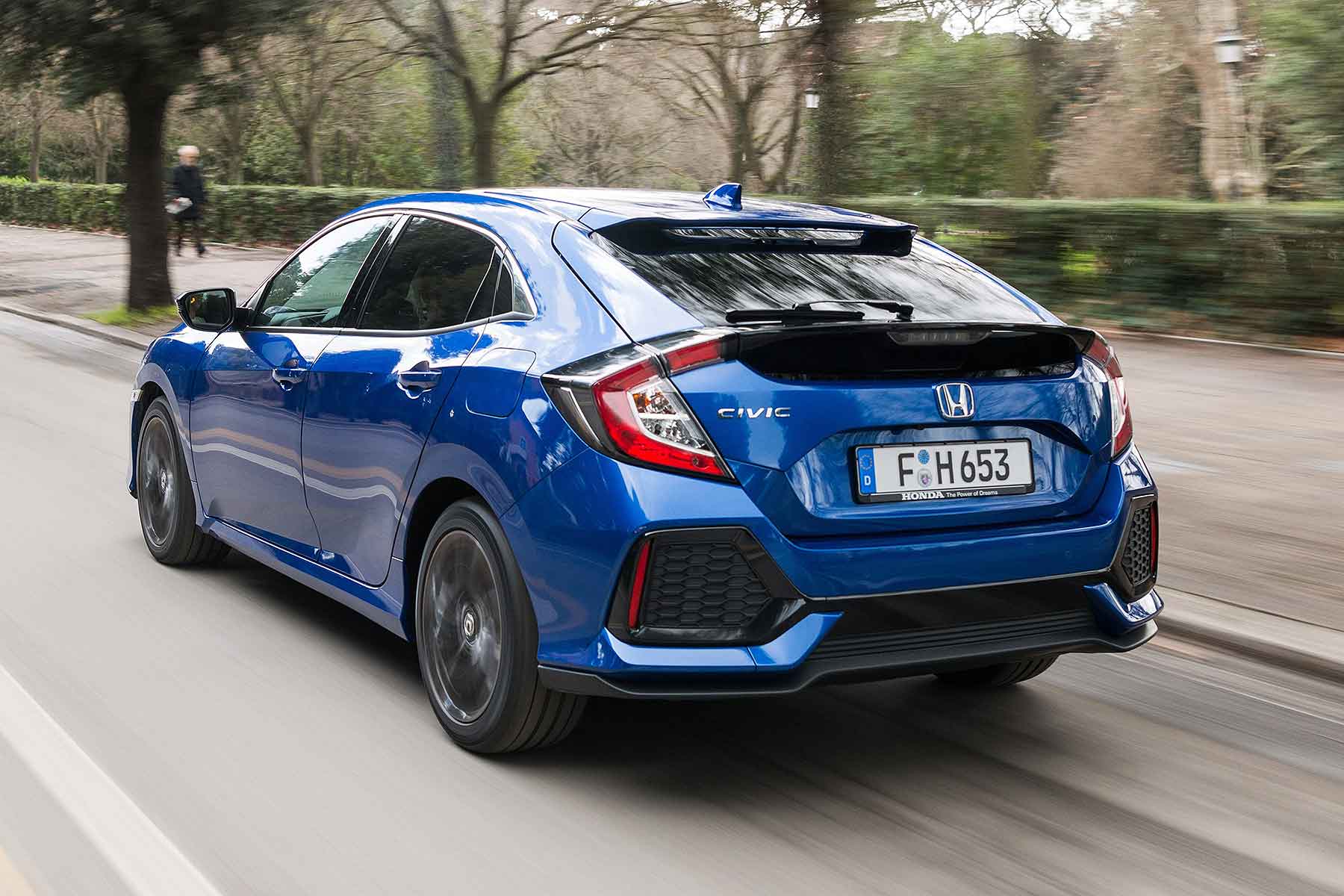 The gearbox is lovely, a properly ‘Honda’ snick-snack shift. The powertrain in general is accomplished too, with no surges, rumbles, shudders or shakes. There’s a classy finesse to driving it, one that shows exemplary tuning and attention to detail. It’s not the quickest, but it’s one of the nicest to drive.

The short test route didn’t throw up any obvious issues with ride and handling compared to the petrol models. The ride’s a bit noisy over broken surfaces (of which there were many on the Italian test route), but it corners flat, with firm and positive steering weight, and that subtle extra slice of confidence you feel from a car with well-sorted suspension – admittedly, mind, one aided by adaptive dampers: they come as standard on top-spec EX models.

Did I prefer driving it compared to a petrol Civic? Not a Type R, obviously, but I’d still pick it over a 1.0-litre or 1.5-litre. This new diesel is effortless, refined, almost entirely free from any distasteful diesel tricks (it’s returning to the standout refinement boasted by Honda’s original 2.2-litre i-CTDi diesel, something lost in the first era of the downsized 1.6) and is almost certain to deliver far better miles per gallon than the petrols. Family hatch diesel buyers, it’s genuinely hard to fault. 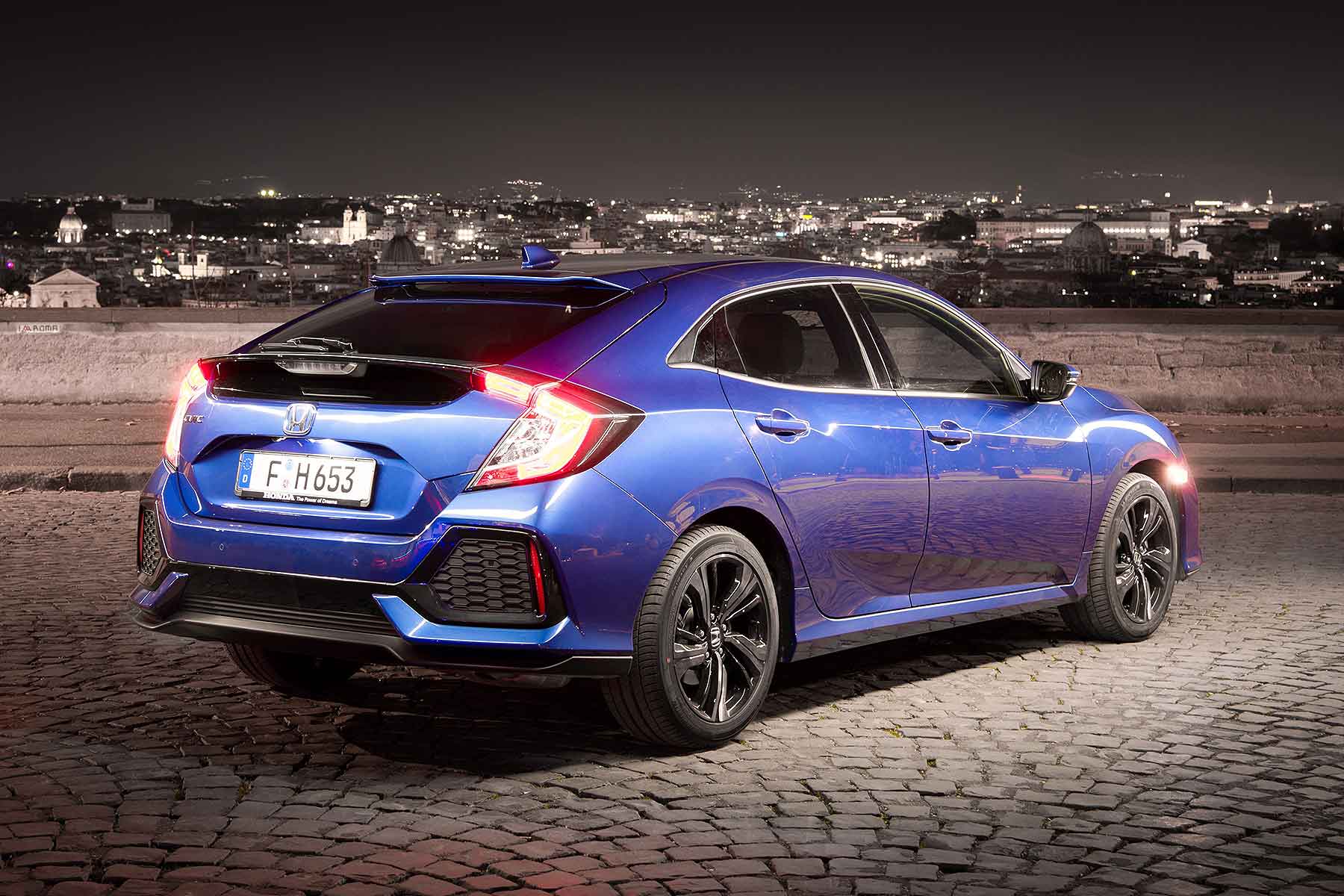 If you don’t do many miles a year, and rarely go near a motorway, as you were. There’s nothing to see here. Save your £1,300 and carry on buying the 129hp 1.0-litre petrol Civic. But those who cover average miles or more will know that only diesel will deliver the fuel economy and range they’re used to. Fleet drivers, this is still the Civic for you.

That Honda’s worked to make it cleaner and more refined than ever, with maintenance-free NOx tech and compliance with the latest, toughest economy and efficiency tests, is further good news. If it’s right for you, ignore the headlines and buy with confidence. It won’t just save you a fortune in running costs, but should also surprise and remind you just why we used to like modern diesels in the first place.

Search for offers on the new Honda Civic

No replacement for displacement: the 25 cars with the biggest engines

From the McLaren F1 to the Dodge Ram, we count down the road cars with the largest capacity engines. There’s nothing with less than six litres here
Read more

Revealed today, the 663hp, £2.8 million Gordon Murray Automotive T.50 could be the purest, most exciting driver’s car ever. Here’s what you need to know
Read more

The UK’s most powerful EV charger is now open

Ionity's 350kW electric car charging station in Kent is the first of 40 high-power sites for the UK, each with up to six charge-points.
Read more

Taking the Pista: new Ferrari takes its top off in Paris

Revealed: the reasons why we argue in the car

Directions and back-seat drivers are named as the top reasons why we argue in the car, with drivers and passengers falling out every 23 minutes.
Read more

Best of British: 25 homegrown cars to make us proud

We assemble 25 cars that put the Great into Great Britain - some predictable, others a bit left-field. Because #Brexit.
Read more