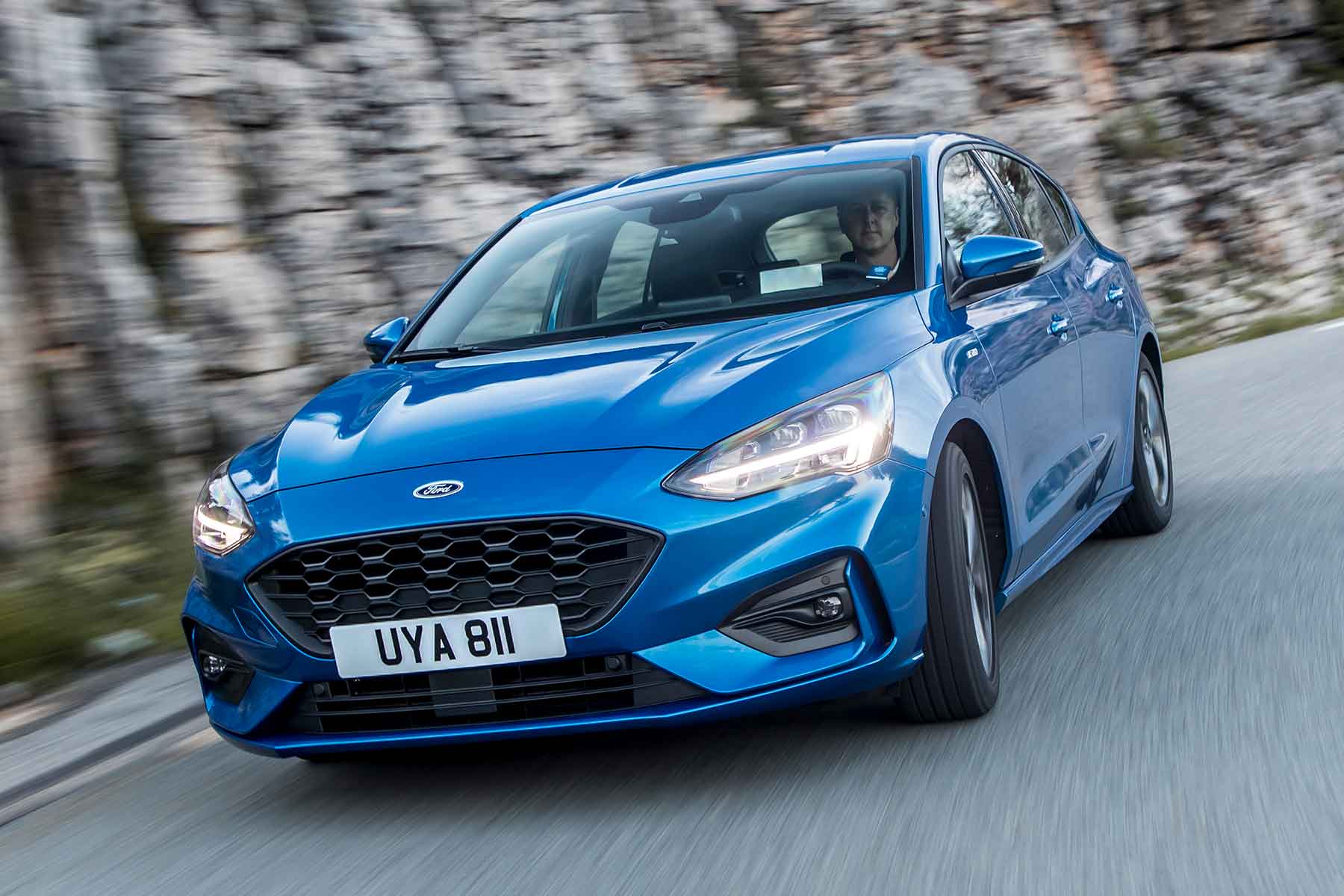 The original Focus was a quantum leap over the Mk5 Escort it replaced. Sharply styled, practical and, above all, brilliant to drive, it transformed Ford’s reputation. In Europe at least, it was arguably the most important car to wear a blue oval since the Model T.

Now, 20 years and three generations later, Ford wants to recapture that Mk1 magic. Helmut Reder, global director for mid-size cars, talks of the “secret sauce” that made the first car so special – and says the 2018 Focus “shares the same DNA”. The stakes are high, but so are expectations. Can Ford deliver?

Rejoice! The Focus is still class-leading to drive 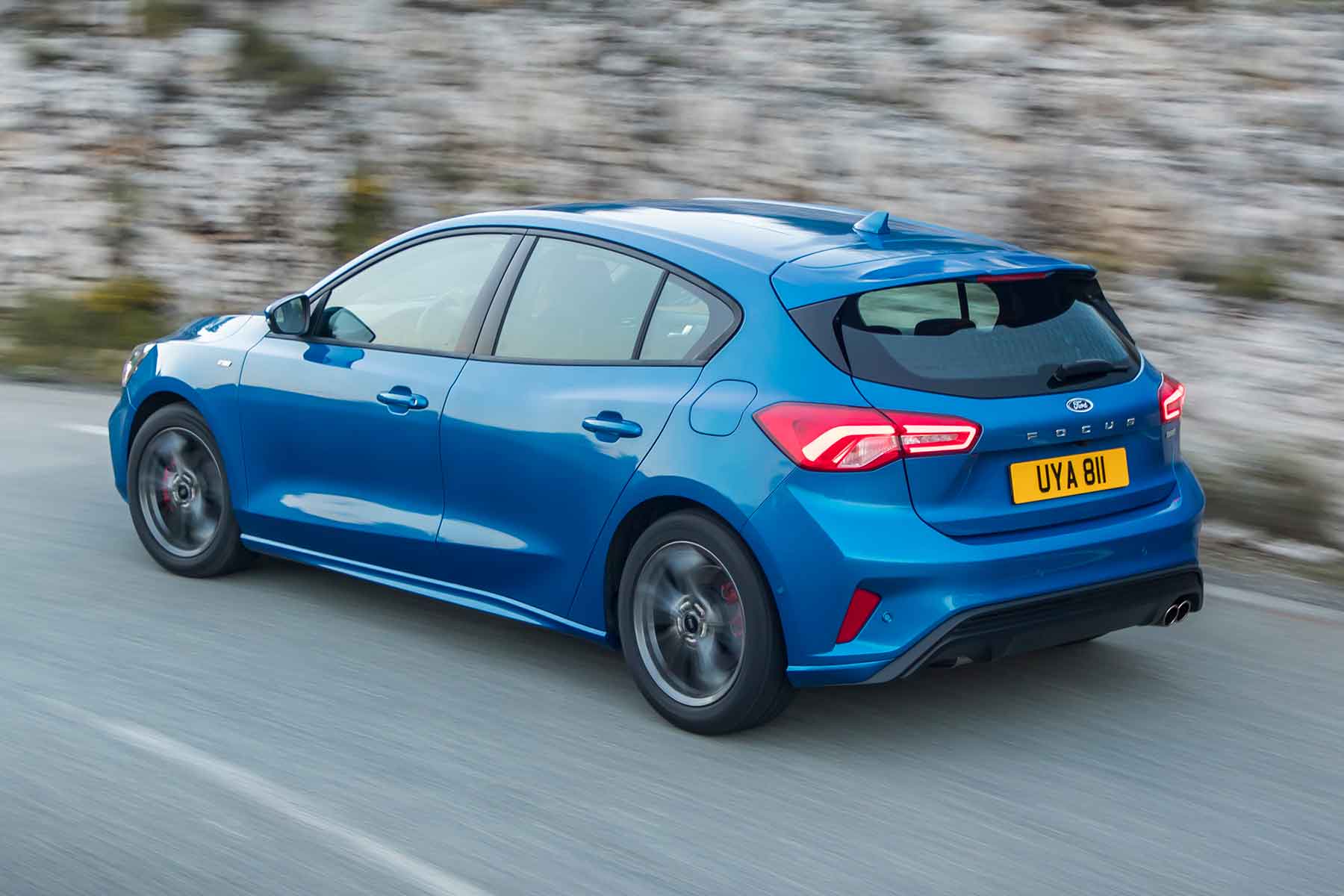 Let’s cut to the chase: the 2018 Focus is great to drive. Not overtly sporty, granted, but its chassis has a supple surefootedness – a ‘flow’, for want of a better word – that even disinterested drivers can’t fail to appreciate. As one engineer explained: “They may not know why the car feels good, but they know it does.”

The ingredients making up that mix are, chiefly, steering and suspension. The former is calm and communicative, effectively filtering out bumps and wheel-tugging torque steer without muffling messages from the road. The latter is pliant, but pleasingly resistant to roll – even on the hairpin bends of our French test route.

The Focus now offers a choice of drive modes: Normal, Eco and Sport. These affect throttle response, steering weight and traction control, plus gearshift timings on automatics, but make oddly little difference in practice. A far greater contrast is evident between standard and ST-Line cars, the latter with stiffer suspension and 10mm lower ride height. The result is tighter body control and appreciably keener turn-in.

A few more angles on the Focus estate.

There is a small caveat here, though: different rear suspension set-ups. Lower-powered 1.0-litre petrol and 1.5 diesel models get a twist-beam axle (including the banana-shaped ‘force vectoring’ springs of the Fiesta ST), while the 1.5 petrol, 2.0 diesel and all Vignales have an independent, multi-link arrangement. The twist-beam won’t leave you wanting, particularly in everyday driving, but on the brilliant B-roads in the foothills of the Alps, the higher-spec Focus felt more poised and planted.

Adaptive damping (‘CCD’ in Ford-speak) is also available – with two additional drive modes – but we’re not convinced you need it.

Both petrol and diesel engines are excellent, too 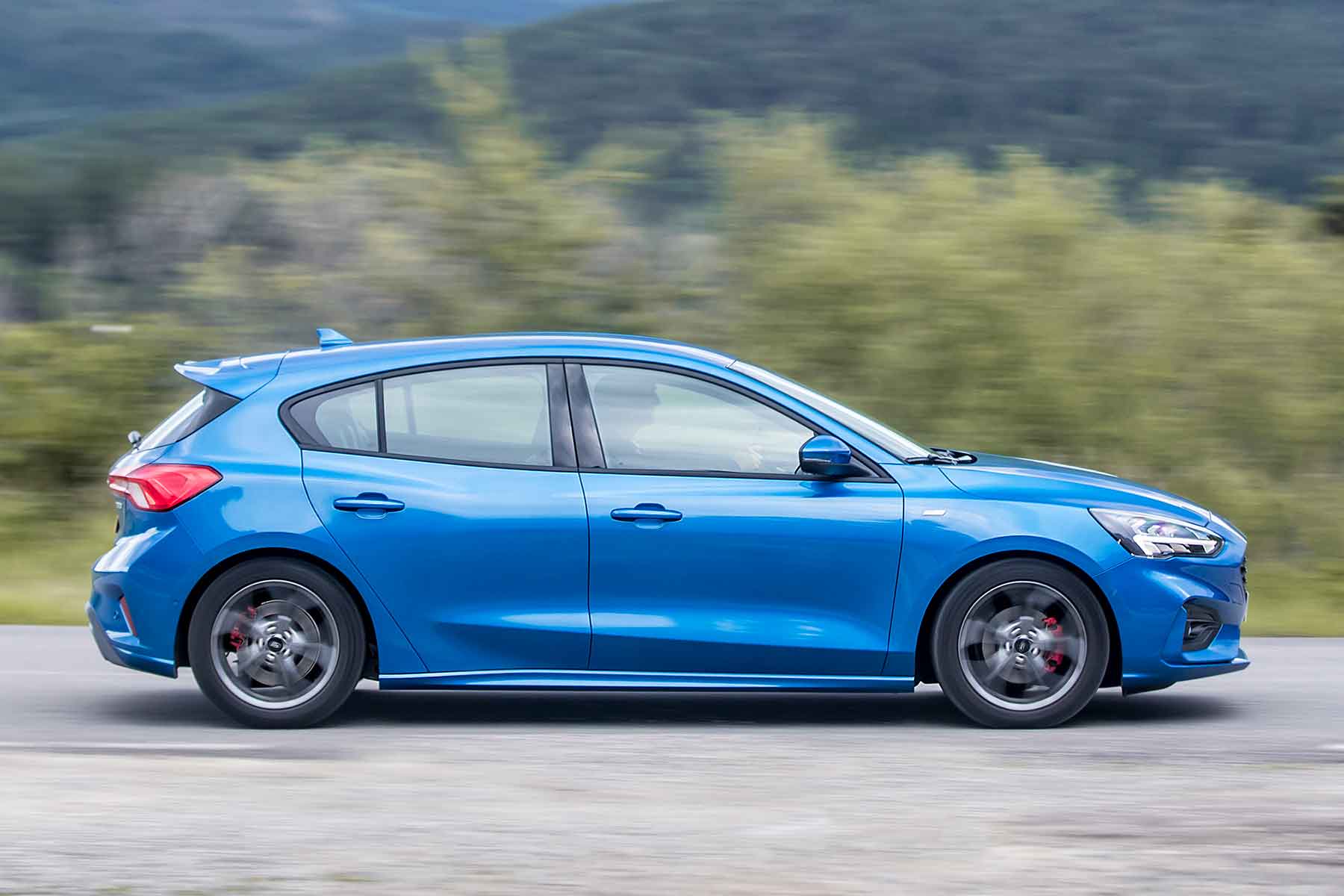 The Focus has a pretty comprehensive line-up of engines from launch. The familiar 1.0-litre petrol Ecoboost comes in three outputs: 85hp, 100hp and 125hp. There’s also a 1.5 Ecoboost with 150hp or 182hp. A petrol/electric hybrid is due in 2020.

For diesel devotees, there are two new Ecoblue units: 1.5-litre with 95hp or 120hp, and 2.0 with 150hp. Buyers can pick from slick-n-snappy six-speed manual or intuitive eight-speed automatic gearboxes, too – the all-new auto featuring a Jaguar-style rotary selector.

We started with the 125hp 1.0, which lopes to 62mph in 10 seconds flat. Thanks to clever cylinder deactivation tech, it can seamlessly switch to two cylinders to save fuel, returning 58.9mpg in the official test. This is likely to be Ford’s volume-seller and, frankly, it deserves to be. It’s smooth, eager and fast enough to be fun.

We then sampled both flavours of 1.5 petrol. It’s noticeably growlier when worked hard, but not unpleasantly so, and the 182hp version does a passable impression of a warm hatch (0-62mph in 8.3sec, 51.4mpg). It’s the fastest Focus until the ST arrives (see below).

Don’t write-off the diesel, though. The final leg of our route was in a 120hp 1.5. Punchy, quiet and offering vastly more miles per gallon than the petrols (10.0sec, 83.1mpg), it’s a sensible choice for higher-mileage drivers.

It’s (a bit) cheaper than the old one 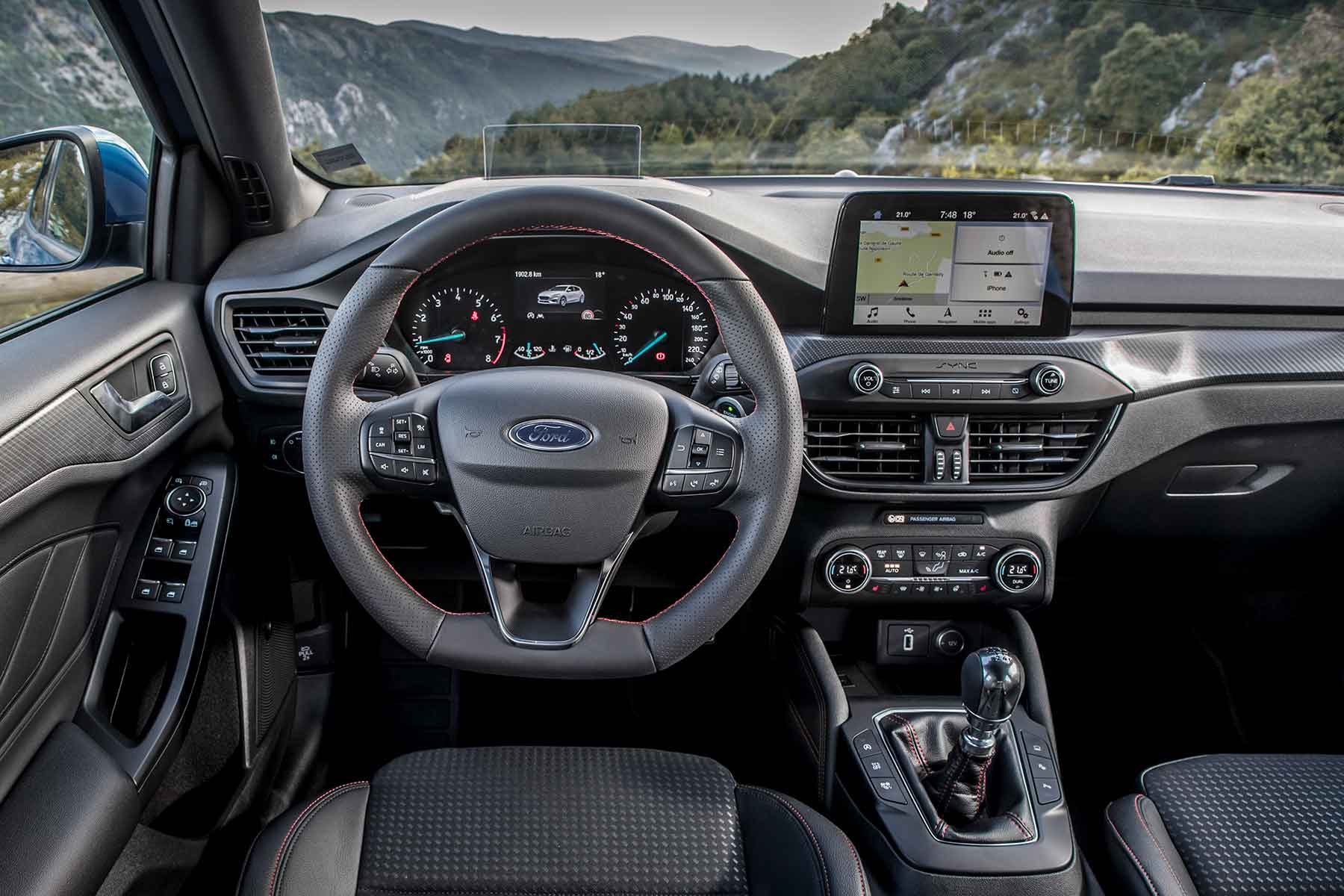 Tell me about trim levels 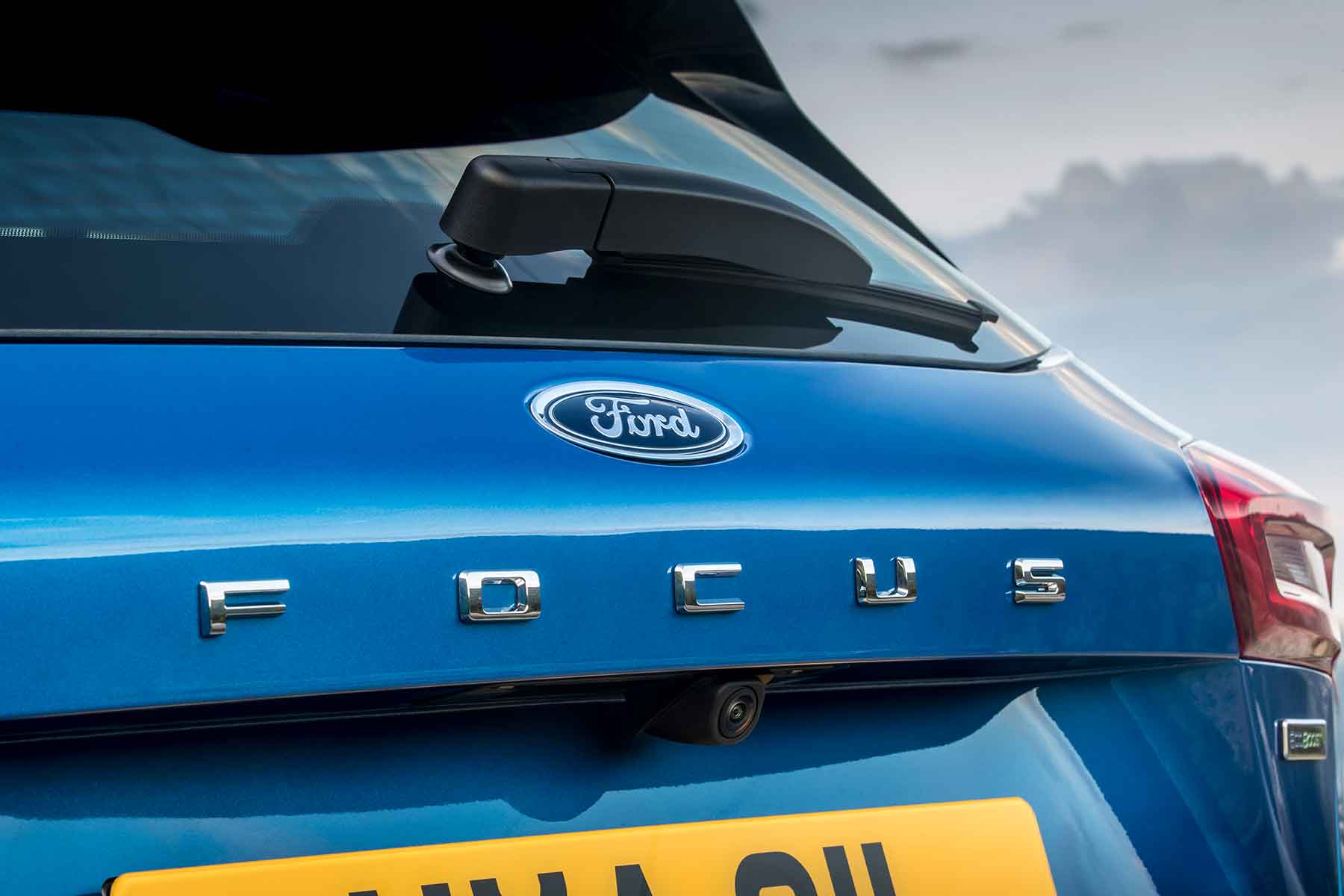 At the top of the tree, the Vignale boasts full leather, LED lights, head-up display, rear-view camera and a 10-speaker audio system.

It can almost drive itself 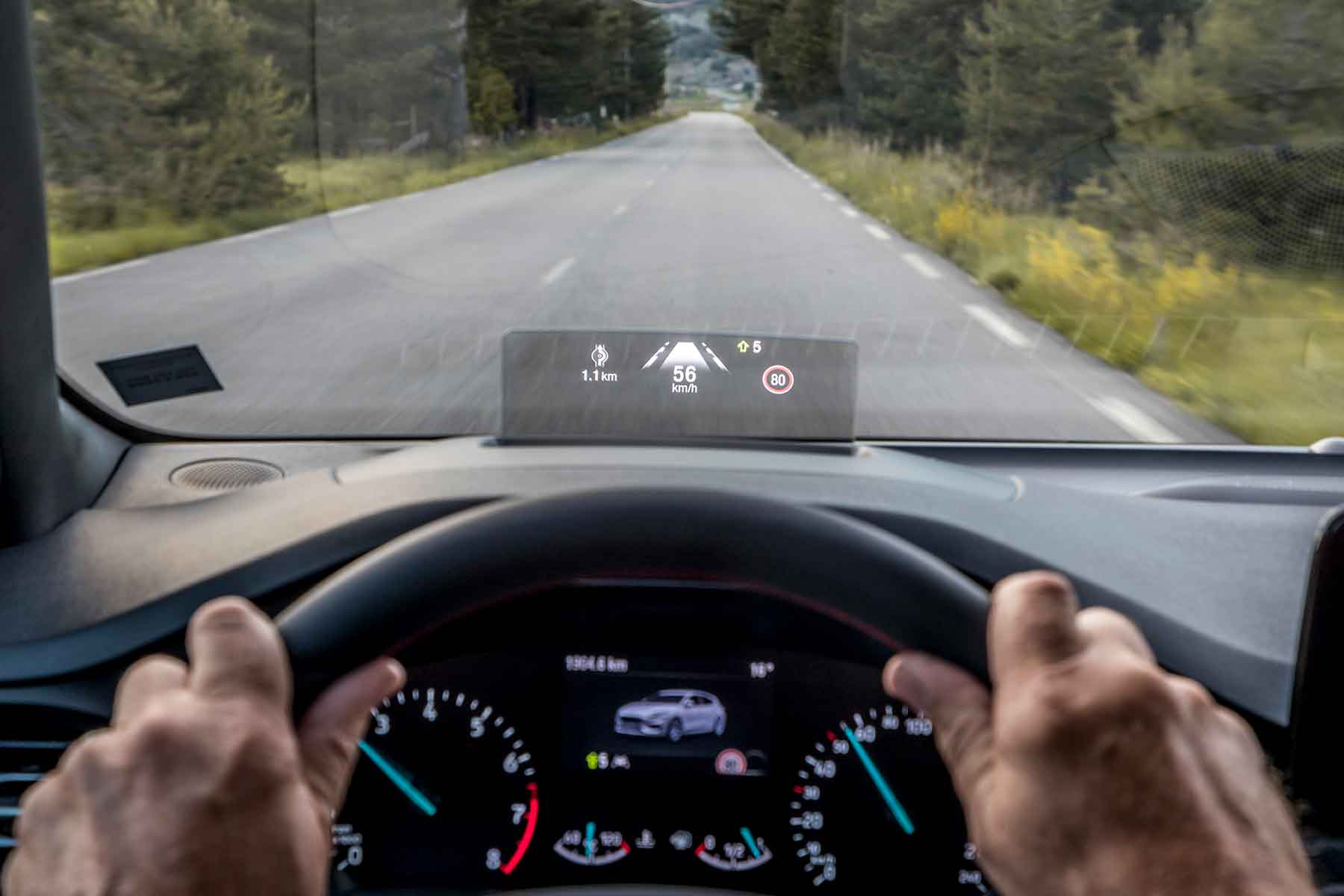 The 2018 Focus boasts an unprecedented number of electronic driver aids, many of them lumped together in the Driver Assistance Pack (£500) and Convenience Pack (£500, or £750 with front/rear parking sensors).

Highlight of the Driver Assistance Pack is Adaptive Cruise Control (ACC), which uses radar to maintain a set distance to the car in front. It works impressively well even on twisty roads, and will brake to a standstill then pull away again if the stopping duration is less than three seconds. It can also recognise road signs and gently nudge the steering wheel to help you stay centred in-lane. Hands-free driving is off the menu, however.

The Convenience pack includes a rear-view camera, Ford’s clever pop-out door protectors and Active Park Assist. This steers the car automatically into a space while you control the pedals, ensuring perfect parking every time.

The head-up display – a £400 option – is projected onto a pop-up screen atop the instrument binnacle, showing your current speed, speed limits and sat nav directions. ‘Jet fighter tech’ involving perpendicular light waves means that, unlike many systems of this type, it remains visible even with polarised sunglasses on.

A Golf still has a nicer interior 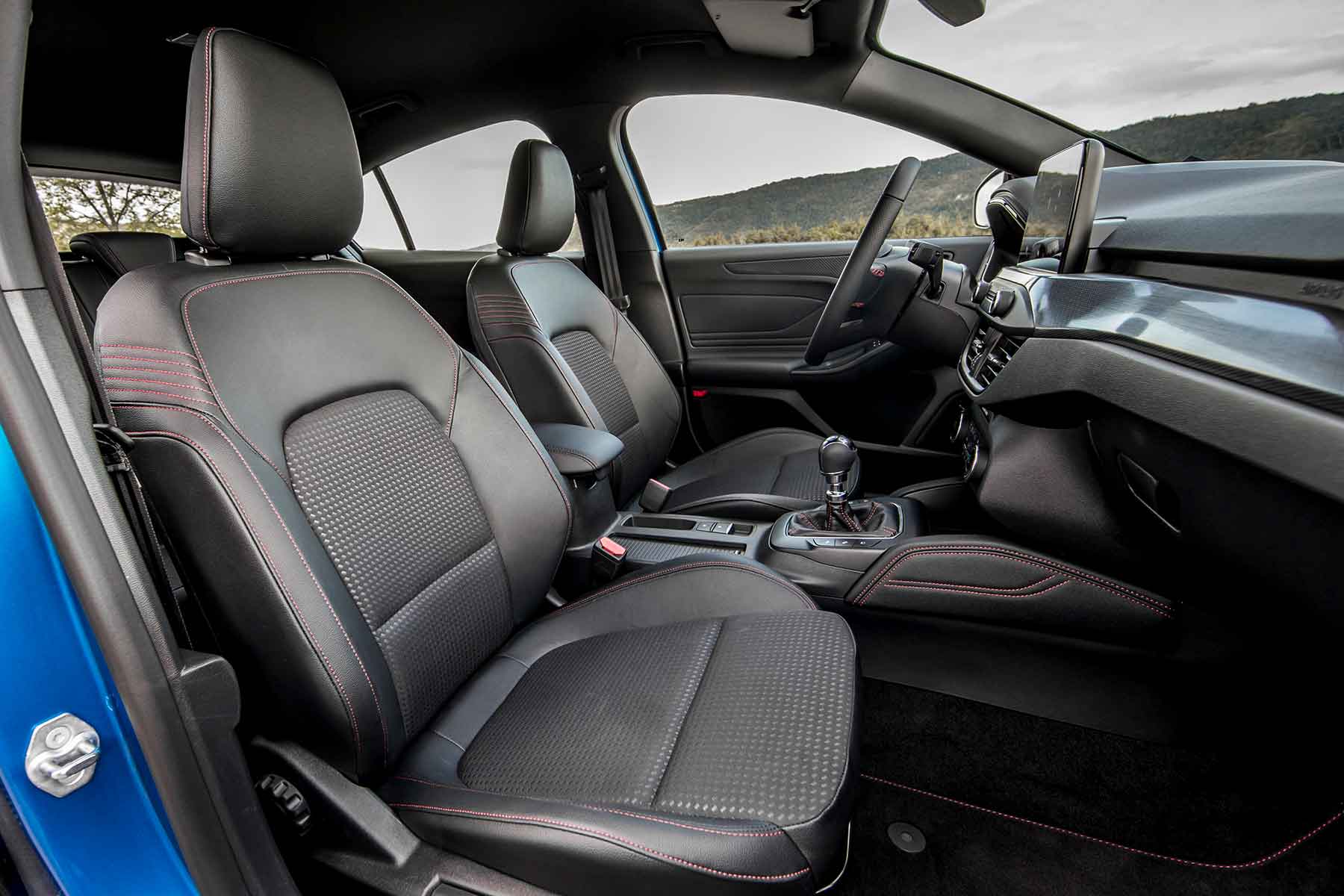 Focus chief stylist Amko Leenarts previously worked in interior design and packaging – and it shows. The Mk4 has a near-identical footprint to the outgoing car, but usefully more cabin space. Shoulder room and knee room for rear-seat passengers (a noted weakness of the Mk3) is much-improved.

Perceived quality also takes a welcome step up, although it won’t cause sleepless nights in Wolfsburg just yet. Little touches, such as rough plastic edges around the seat-slide lever, point to subtle cost-cutting.

The Focus dashboard looks largely like a Fiesta’s, and that’s no bad thing. Ford has reduced the button-count by 50 percent, concentrating many functions in the top-mounted touchscreen. Fortunately, there are still physical switches and dials for the stuff you need most: stereo volume, air-con, and so on. You also get physical dials; there’s no option (yet) of a ‘Virtual Cockpit’-style digital display

Buyers can choose from five-door hatchback or estate bodystyles. To the dismay of retirees across the land, the four-door saloon won’t be sold in the UK.

A crossover is coming – and a new ST 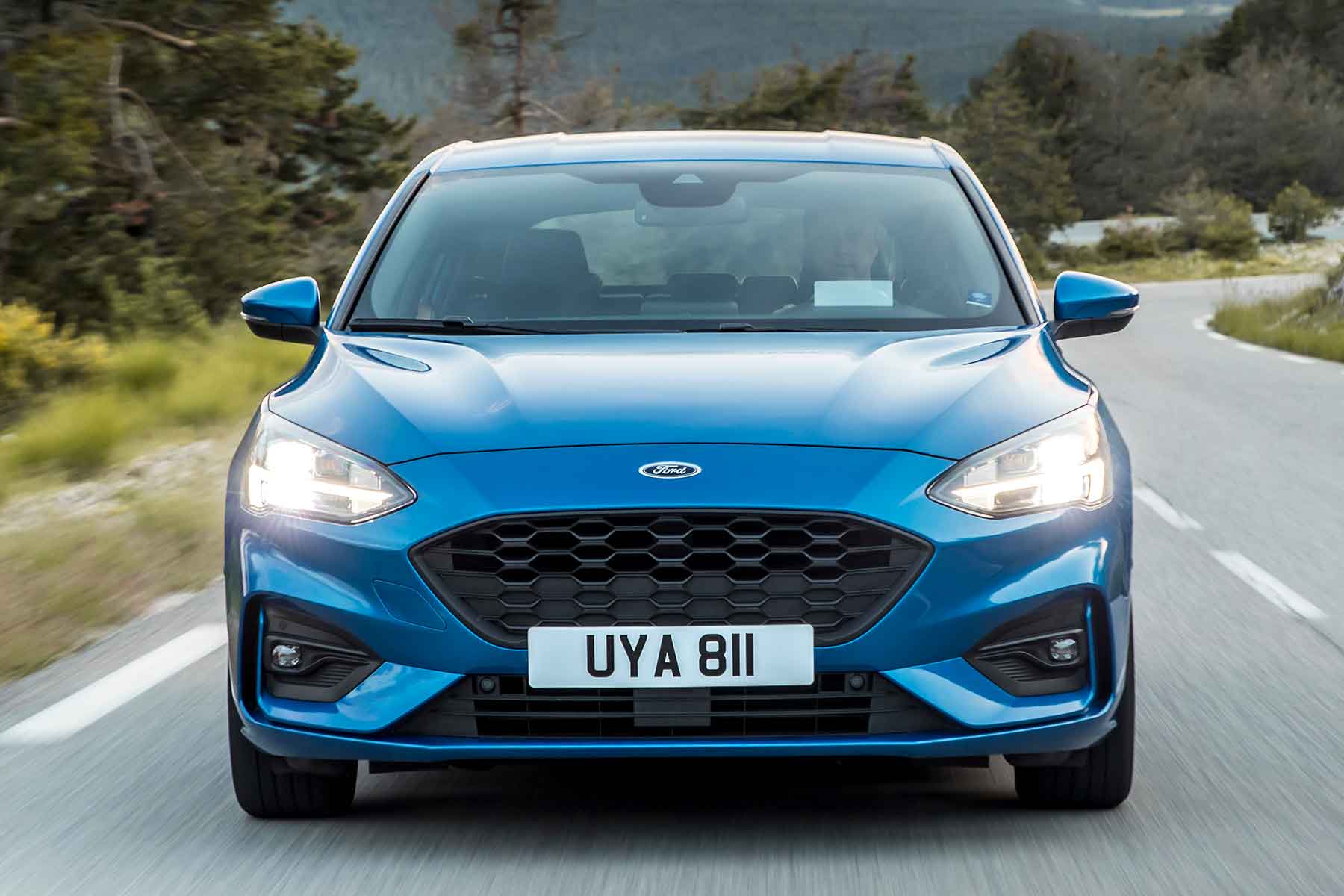 Ford is late to the mid-size crossover party, but the Focus Active – due in spring 2019 – finally gives it a riposte to the ubiquitous Nissan Qashqai. The Active estate, meanwhile, is expected to account for half of all estate sales.

As you’d expect, the Active has suitably tough-looking black cladding, front and rear skidplates, and a 30mm hike in ground clearance. What it doesn’t have is four-wheel drive, although the Focus shares its ‘C2’ platform with the forthcoming new Kuga SUV, so all-wheel traction is theoretically possible.

An ST hot hatch is also on the cards for 2019, using a detuned version of the 2.3-litre Focus RS engine. Early reports suggest around 250hp and a six-speed manual ’box only. As for a new RS, Ford execs remained tight-lipped at the launch, but here’s hoping… 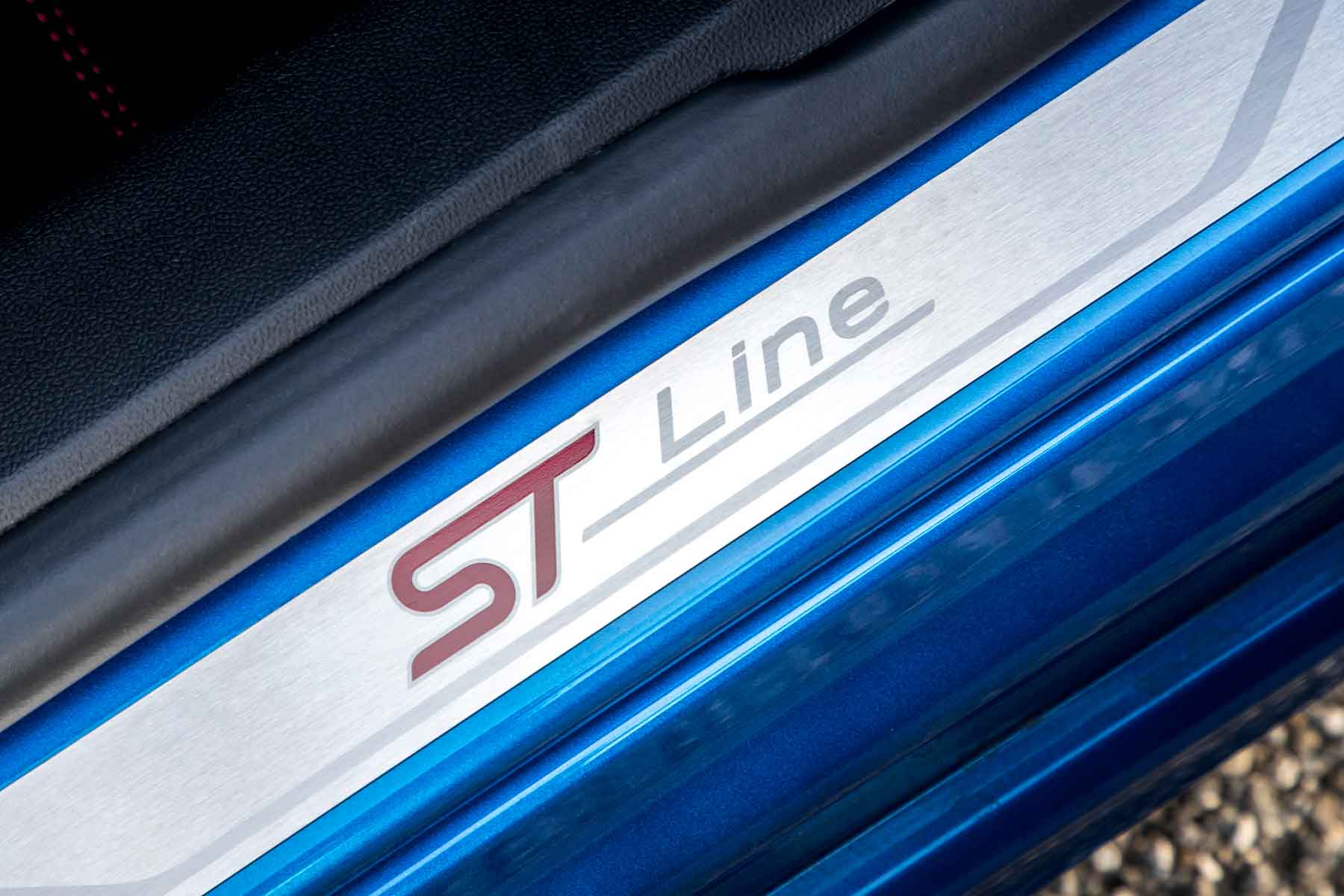 Focus buyers face a bewildering array of engines, trim levels and options, so which one should you buy? We reckon the 125hp 1.0 petrol suits most needs, with the 120hp 1.5 diesel an excellent fallback if you spend your life on the motorway.

ST-Line is our top-choice spec. It’s more dynamic without sacrificing ride comfort, and has sportier styling, too. We’d steer clear of the too-basic Active and overpriced Vignale, though. Despite its lofty aspirations, the upmarket Focus is no Audi A3.

Swapped into the top-spec Focus Vignale for the final section of the Route Napoleon. It has ALL THE CHROME. pic.twitter.com/cdaU0FXAAw

In terms of options, we’d add the both the Driver Assistance Pack and Convenience Pack with parking sensors if possible, plus the 10-speaker B&O Play audio system (£350). Extras you probably don’t need include a heated steering wheel, electric tailgate and CCD dampers.

Lastly, paint. Super-bright Race Red is the only free shade and looks great. Other shades cost from £250 to £795.

Not a game-changer, but back in the game 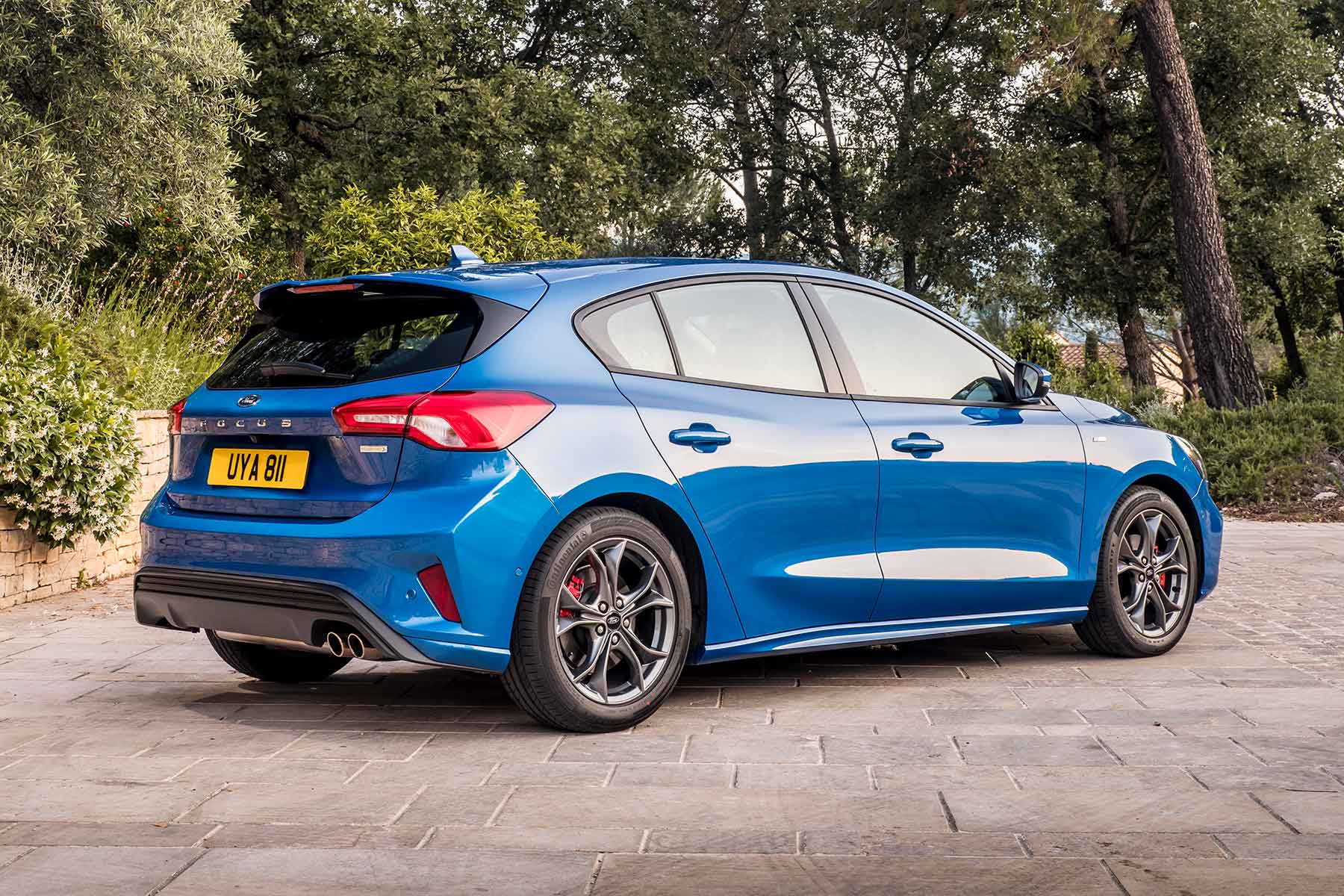 The latest Focus doesn’t rewrite the rulebook as its great-grandfather did, but it puts Ford squarely back in contention. A consummate all-rounder, it’s a car that can – and doubtless will – fit effortlessly into the lives of millions.

Can it match the crushing competence of a VW Golf? Perhaps not. However, the Focus is arguably more characterful and certainly more engaging to drive. There aren’t many 1.0-litre hatchbacks in which you’d deliberately take the scenic route. For our money, it topples the Mazda 3 as the new dynamic benchmark. Helmut’s secret sauce has worked a treat.