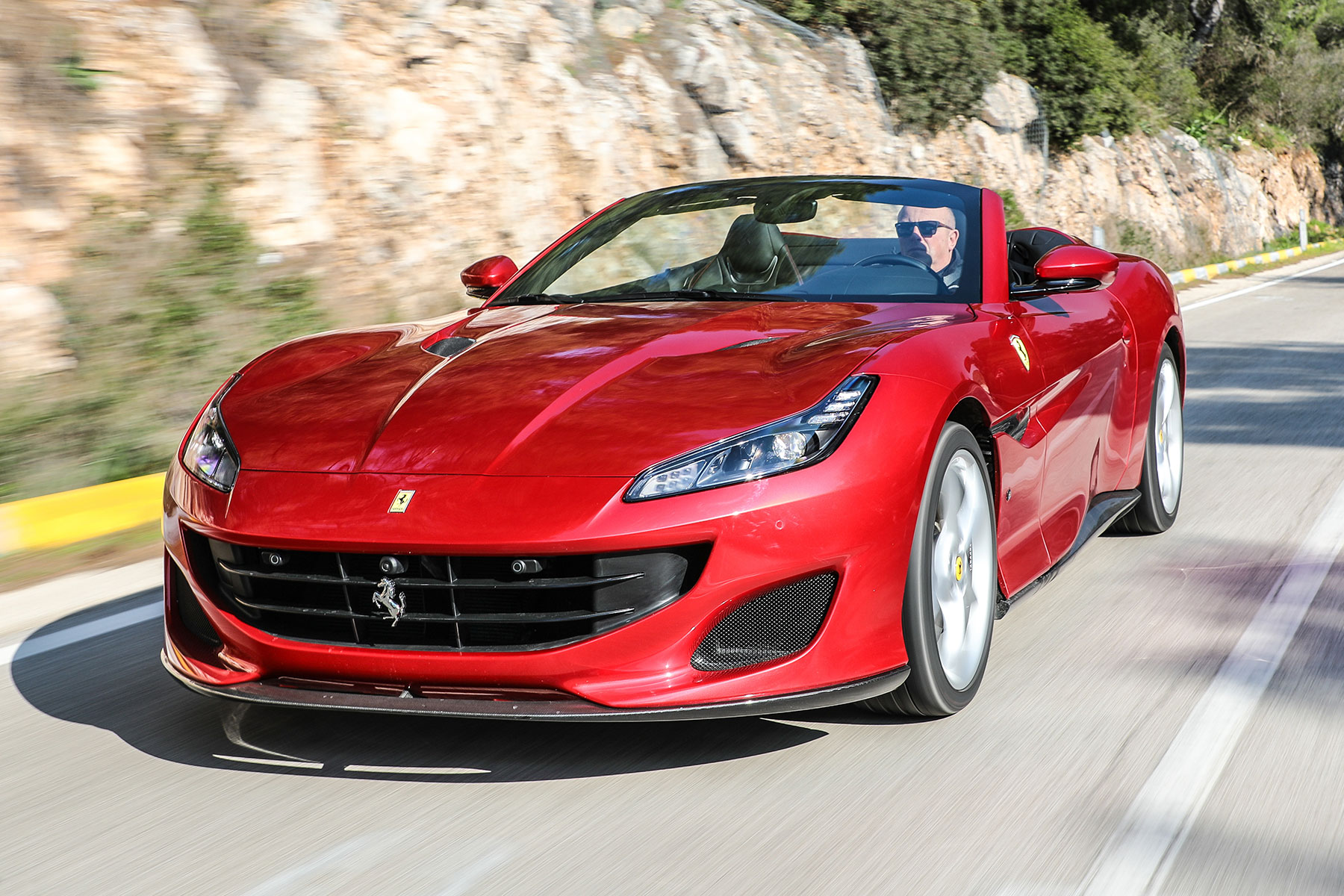 This is the BMW 1 Series of Ferraris. It’s the Portofino, Maranello’s replacement for the California and the cheapest new Ferrari on sale today. Price is relative, of course. It’ll set you back around £166,000 before you go wild with the options list, making it slightly more expensive than a new Aston Martin DB11 Volante or McLaren’s 570S Spider.

The California was new territory for Ferrari, going on sale 10 years ago and quickly accounting for around a third of Ferrari sales worldwide. Buyers liked it, with many new owners attracted to the brand, but we felt it always fell slightly short of what a Ferrari should be. More boulevard cruiser than billionaire’s track toy, the California didn’t do a great deal more than cheaper rivals. It did – of course – have a Ferrari badge, and we suspect that’s what most buyers cared about. 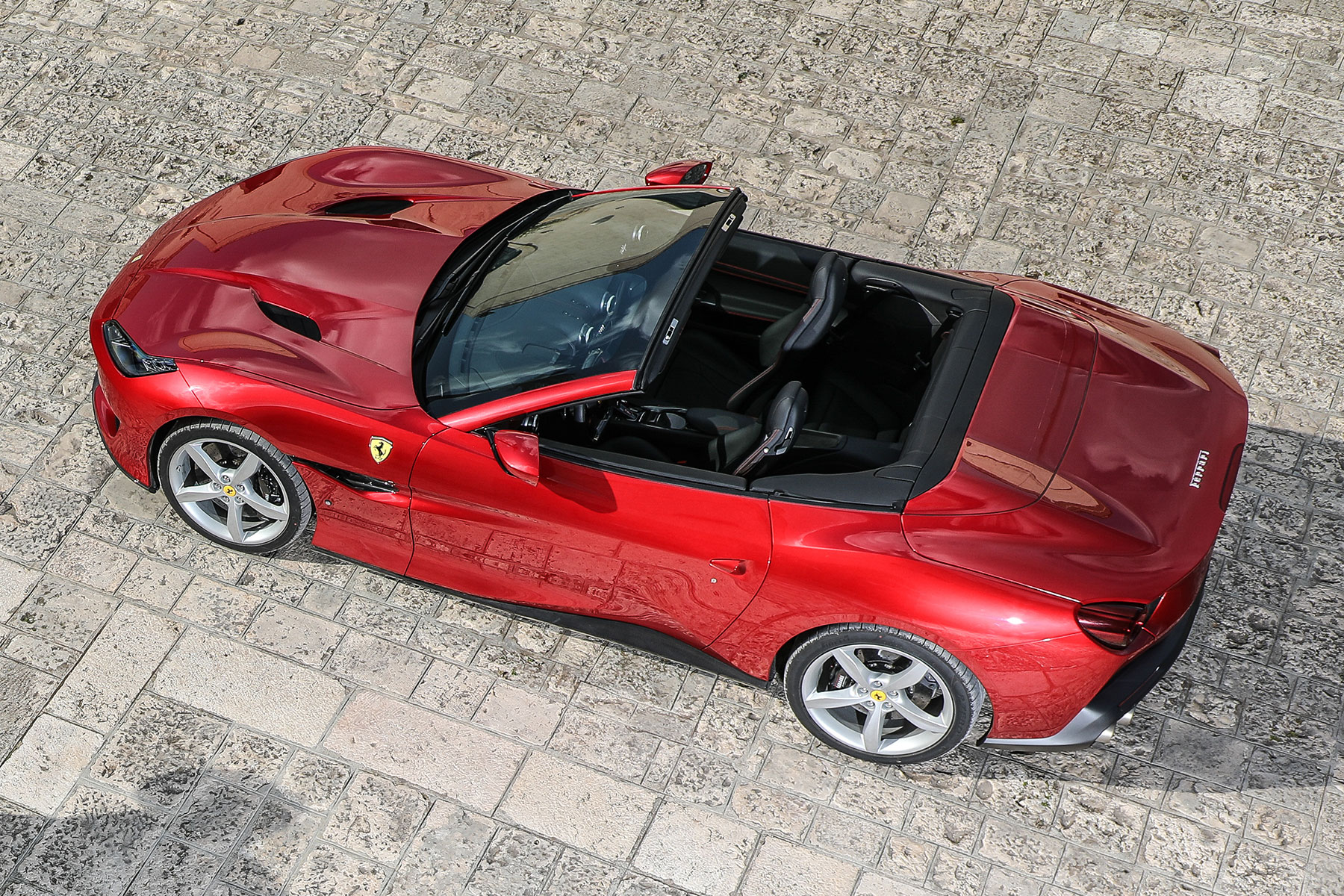 As Ferrari’s marketing experts, engineers and PR team are all desperate to tell us just how much better the Portofino is than the California, we almost get the impression they’re a little embarrassed by the old car. That partly explains the name change. They could comfortably have stuck with the California badge, or opted for something more closely related to the USA – an east coast state, perhaps, rather than a small seaside town in northern Italy.

But the Portofino is very different, they say. And, to be fair, we reckon its design is much more convincing. Those LED headlights bring it into line with the GTC4Lusso and 488, while aerodynamics have played a big part in the car’s shape. Many convertibles don’t look as attractive with the roof up – a problem in the UK, particularly, where top-down weather is rare – but the Portofino’s folding hard-top doesn’t look like an awkward afterthought. With the roof up, it’s a sleek and stylish coupe. 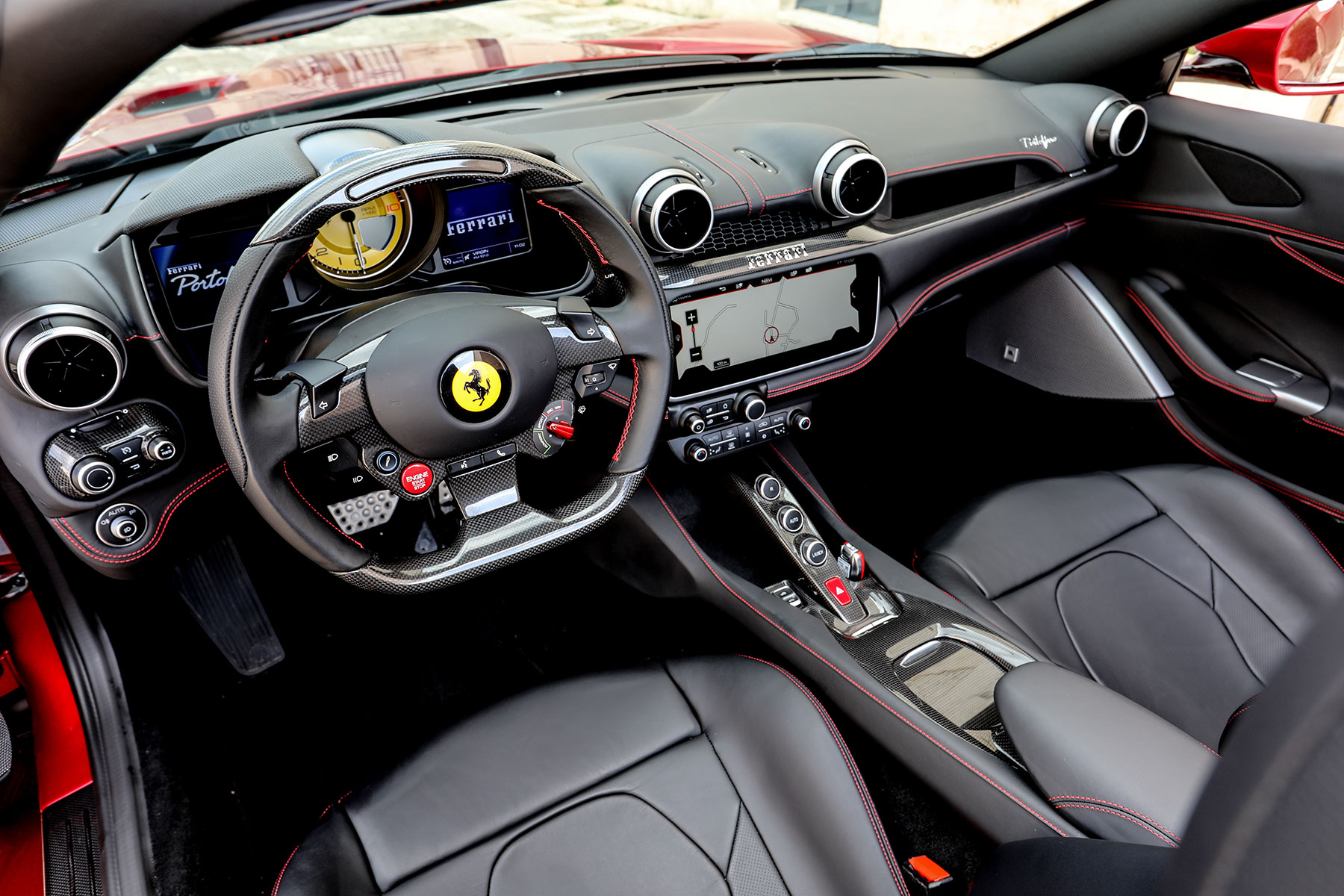 Drop that roof (it takes around 14 seconds) – or, more conventionally, open the door and climb in – and you’ll find an interior that’s surprisingly plush for a car that’s had a fair bit of weight lopped off. The Portofino definitely isn’t a stripped-out track car worthy of the Speciale badge. The 18-way adjustable electric leather seats fitted to our test car and a new 10.25-inch touchscreen infotainment system in the centre of the dash all add up to a fairly upmarket interior. That new touchscreen system includes Apple CarPlay, for a price (£2,400), while if you’re feeling really flush you can spec a separate display fitted on the passenger’s side of the dashboard. For £3,360, this will tell your companion how fast you’re going, as well as what music you’re playing and how much G-force they’re experiencing.

While the interior does feel upmarket, the quality isn’t up there with the likes of the Audi R8. Unless you have the highest of standards, it probably won’t bother you; it’ll win you over with the big prancing horse on the steering wheel and racing car-style controls. The ‘feel good factor’ is pretty high, but the quality of the materials just feels a tad Italian for our £166,000-plus.

What about space? Up front, there’s plenty, while the optional seats we mentioned earlier mean it’s easy to find a position that suits. There’s more room in the rear than before, insists Ferrari, but even children won’t want to spend any period of time in the back. The boot has been enlarged to 292 litres, encroached upon slightly with the roof down, but leaving enough space for a couple of weekend bags. 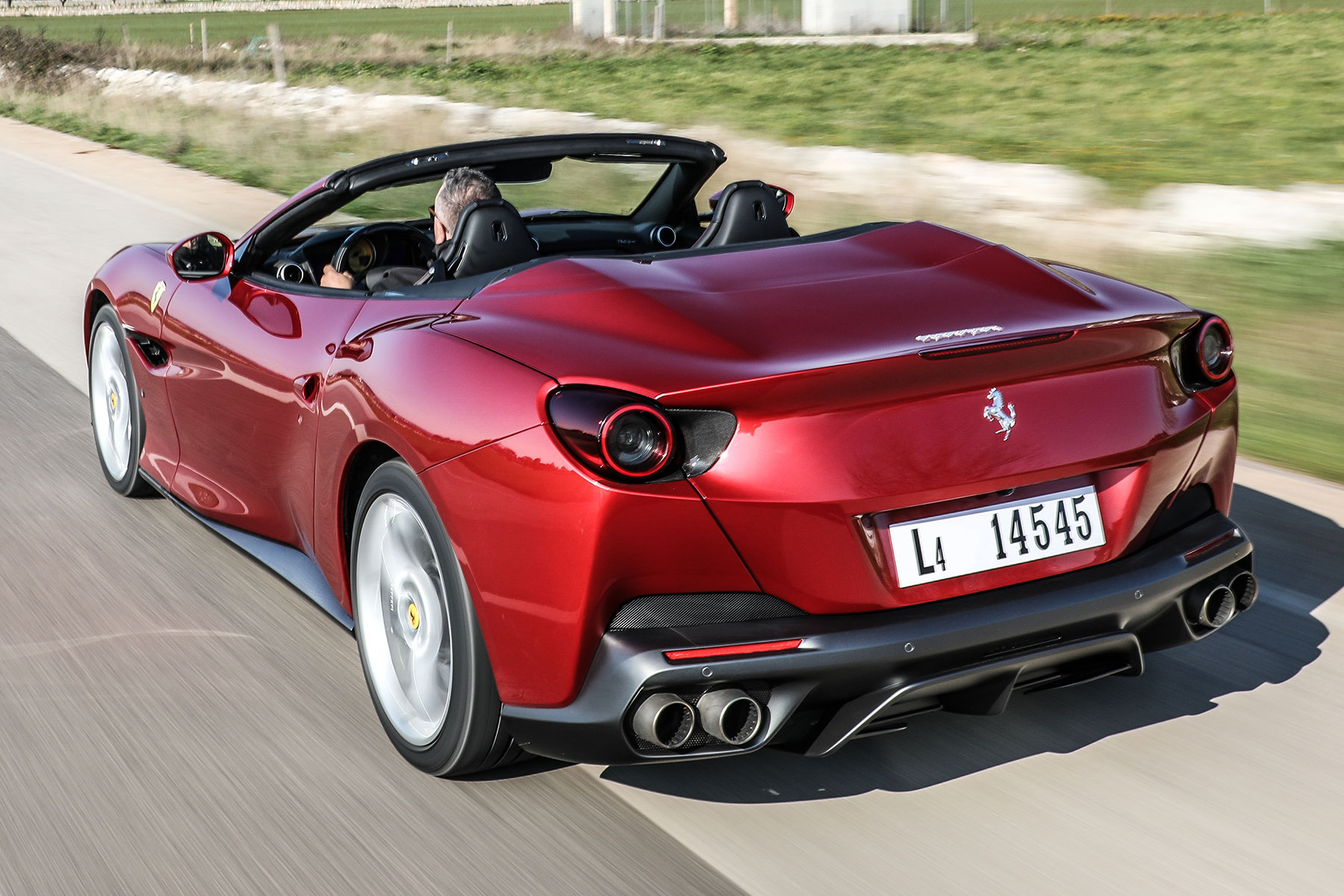 The basic ethos of the Portofino is broadly the same as the California. It’s a rear-wheel-drive GT car with the same turbocharged 3.9-litre V8 engine (International Engine of the Year in 2016 and 2017, don’t cha know?) situated up front. Ferrari’s engineers have reworked that V8 to increase power from 560hp to 600hp, mainly via new aluminium-alloy pistons and conrods, while the air intake and exhaust manifold have been modified.

That all sounds great on paper, but how does the Portofino drive? On first impressions, this could be the same slightly-clumsy not-a-real-Ferrari as the California. Bimbling around low down in the rev range, the dampers struggle to cope with uneven surfaces and the engine makes an irritating ‘look at me’ farty noise. There’s a dial on the steering wheel – Ferrari calls it the Manettino – and even with this left in Comfort, the car seems desperate for attention.

Hmm, not the ideal start for a car that’s intended to attract new buyers to the brand. But, even if it is a grand tourer, it’s a Ferrari, and that means it’s been designed to be driven quickly. Officially, it’ll hit 62mph in 3.5 seconds (124mph takes 10.8 seconds), while Ferrari’s third-generation E-diff has trickled down the range to increase traction by shuffling torque between the rear wheels. Oh, and there’s electric power steering which, although once controversial, is now accepted as the norm.

Up the pace, and the Portofino starts to become much more satisfactory. That farty noise turns into a pleasing rumble thanks to the new exhaust system. Flicking the Mannetino to Sport opens electronic bypass valves and warns anyone within a 50-mile or so radius that there’s a Ferrari on its way, while the magnetorheological dampers work with stiffer springs to keep things tight. 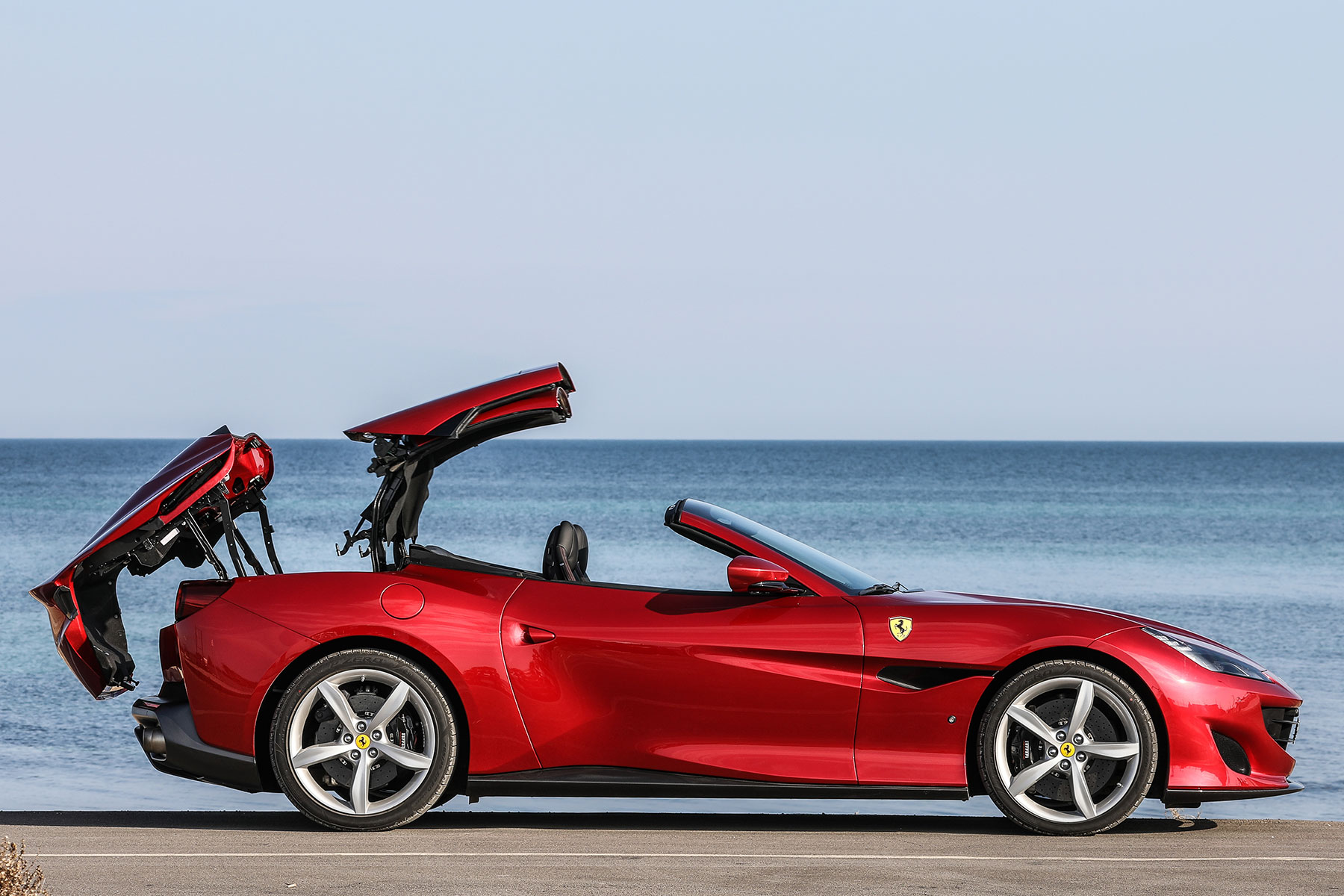 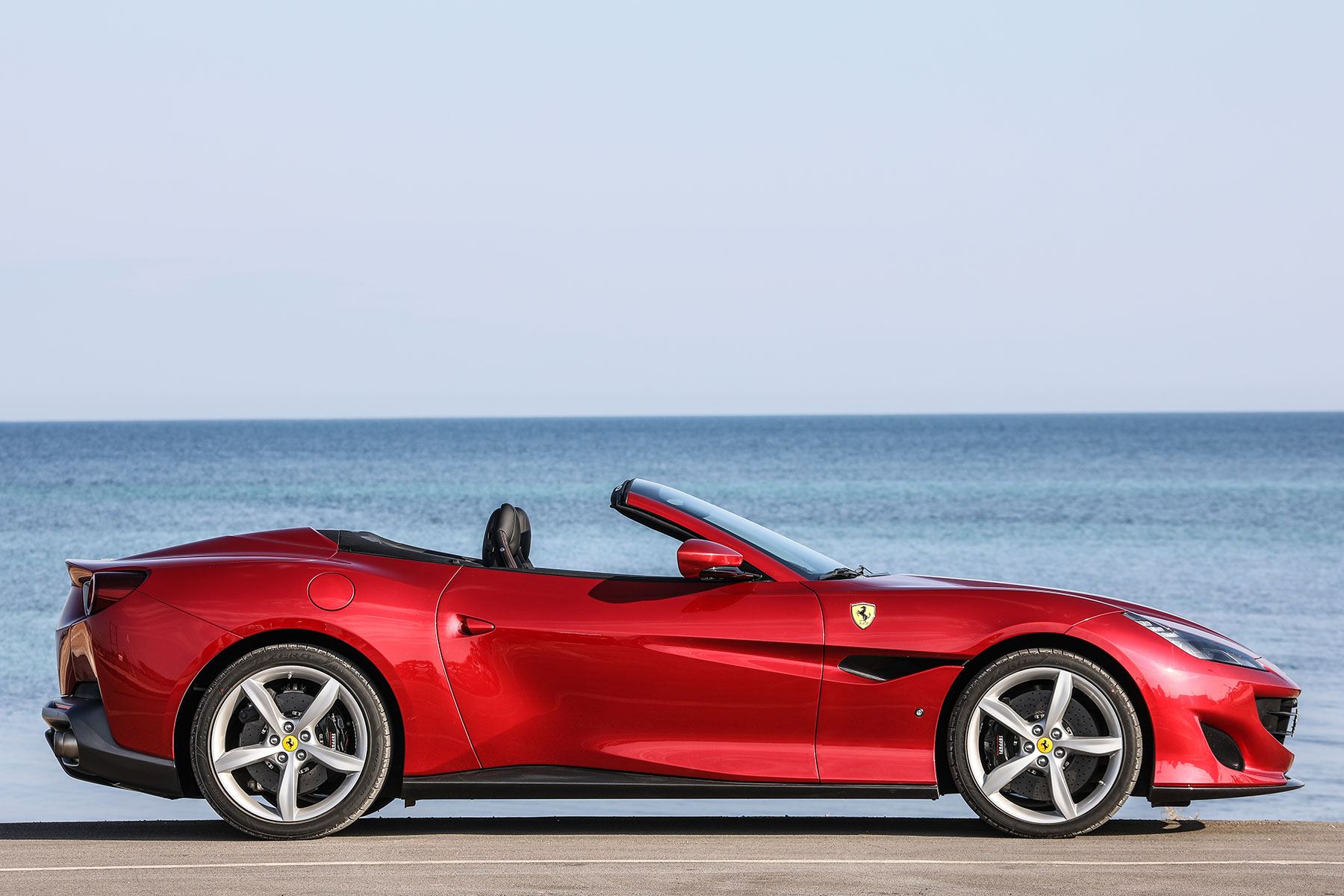 It’s surprising how much the character of the car changes with the roof up or down. With it retracted, buffeting is fairly well controlled, although it’s preferable with the rear windows left up. We prefer the overall experience with the roof up, however; the engine can be enjoyed without too much wind noise interfering, and it feels more like a serious sports car.

You’d be hard pushed to notice any lag from the turbocharged V8. It feels just as quick as its 3.5-second 0-62mph time suggests, and it doesn’t especially struggle for straight-line traction, even on damp and cold Italian roads. Grip through the bends is a different matter – you have to be careful with the throttle not to encourage the Portofino into a slide.

Sideways heroics aside, the Portofino is a satisfyingly-nimble Ferrari to drive. Dealers fed back to head office that customers appreciated the California’s compact dimensions, so engineers were tasked with making the new model only marginally bigger than before. Combine that E-diff with a suspension setup that’s happiest when being pushed, and the result is a car that revels in being driven quick.

Pleasingly, it doesn’t feel remotely intimidating, partly helped by that electronic steering, which returns a satisfying amount of feedback and responds to tiny inputs. Taking the Portofino’s target market into account, we’d call that a success. 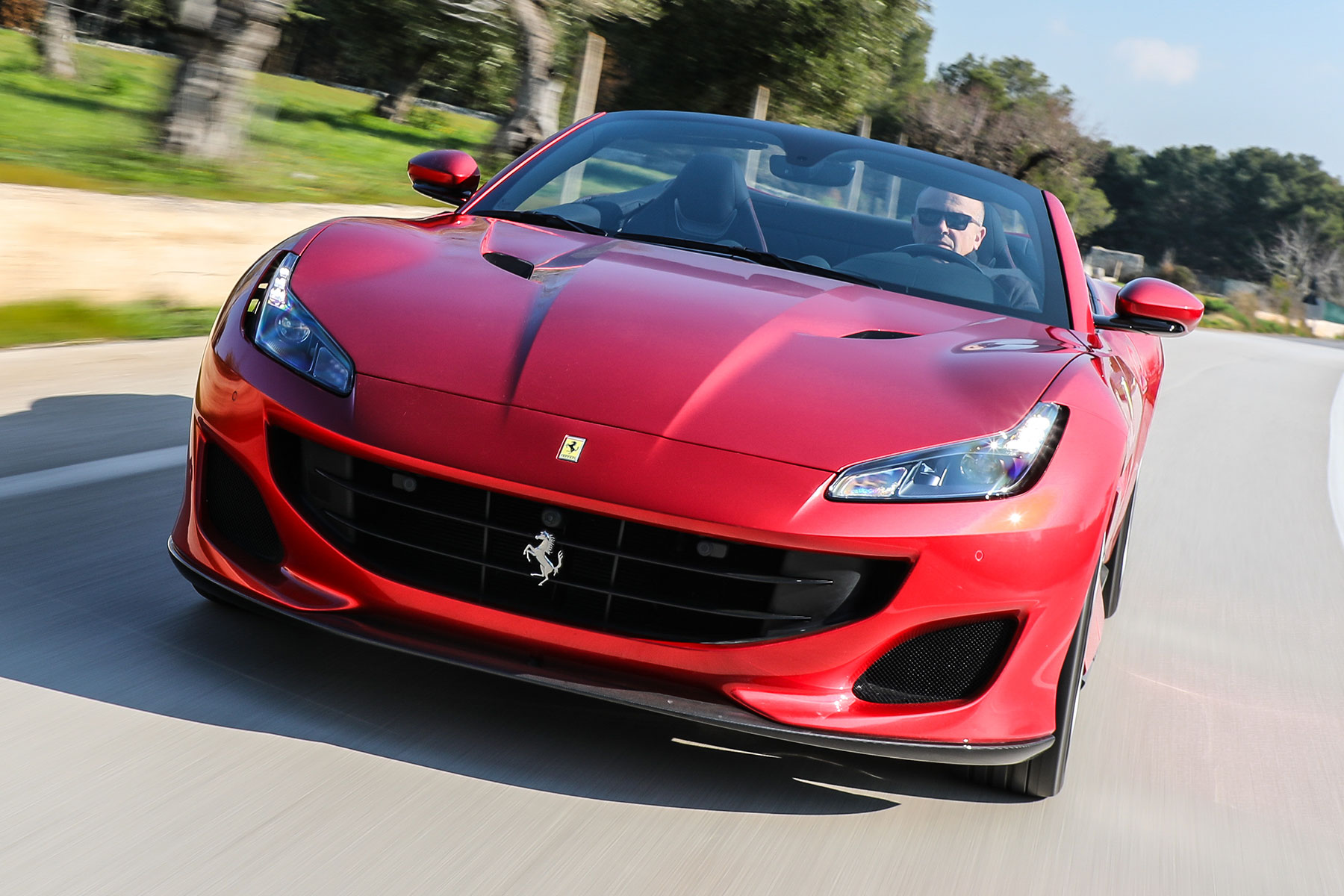 You can imagine the conversation between Ferrari’s marketing chiefs and its engineers. “You need to create a friendly, useable convertible that’s just as happy cruising along the coast as it is lapping Fiorano.”

And it some ways, it’s failed. With minimal revs, the Portofino sounds rubbish – and it’s not particularly pleasant to drive around town. But it’s a Ferrari, and if you want a city car you’d be better off buying a Fiat 500.

In terms of making a usable supercar that should bring in new customers to the brand, the Portofino is impressive. We’d be interested to try the standard magnetorheological dampers in the UK to see if the suspension’s more in tune with our roads than the broken tarmac of southern Italy, but that turbocharged V8 would never get tiring when pressing on.

The interior is very Italian – flashy, but not as robust as that of a German rival – while the exterior is the kind of cohesive design the California never was. Ferrari claims that 150 percent more Portofino buyers are likely to drive it every day compared to other models, and we reckon that ought not be too much of a hardship. It’s a convincing all-rounder.