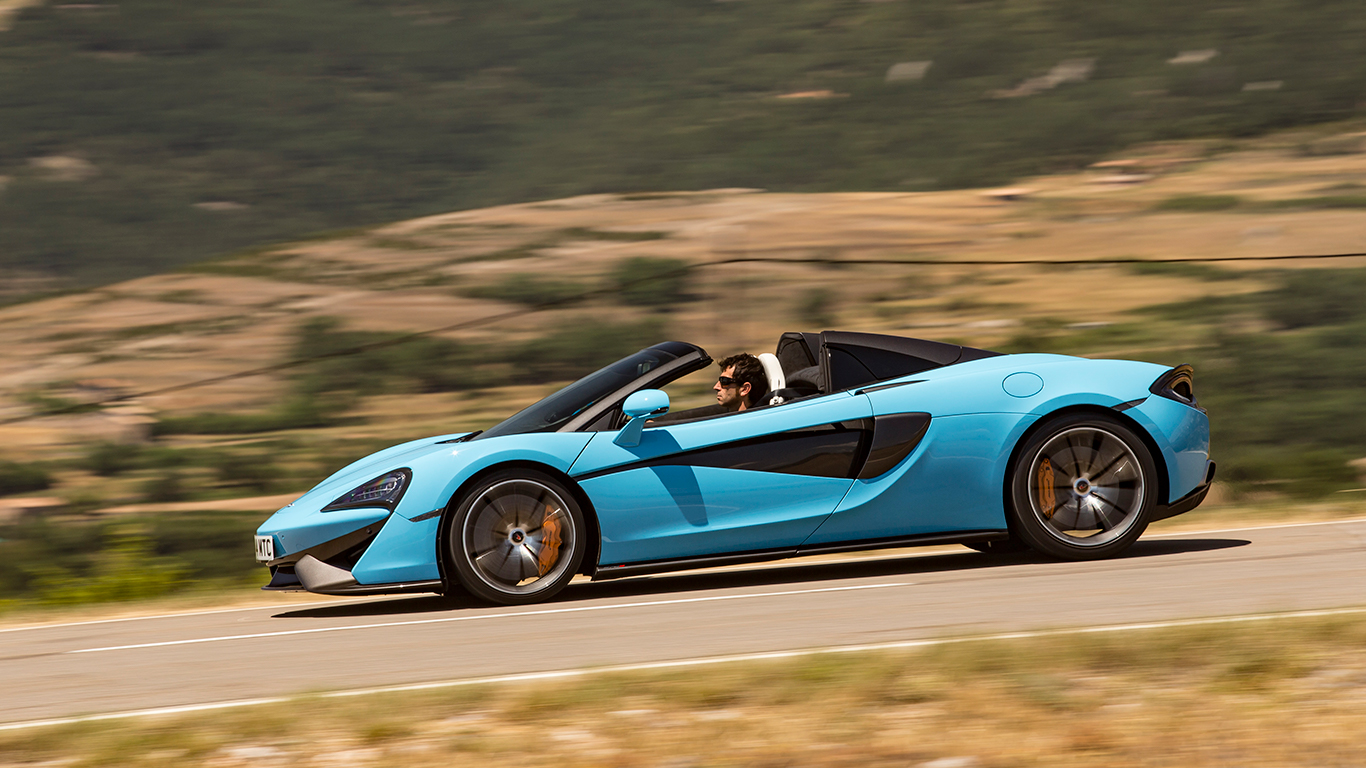 How does Sir like his supercar served? With flash and flamboyance, à la Lamborghini? Or functional and focused, like a Porsche?

McLaren, with its OCD about details, technology and motorsport – the Ron Dennis effect, if you will – has always seemed closer to Porsche on the supercar spectrum. Yet Ron has gone, and there’s no sign of his po-faced seriousness here in Barcelona. McLaren’s PR people buzz around the new 204mph 570S Spider. Their mood seems buoyant – bullish, even. Perhaps they didn’t get the memo.

This is the fourth model in McLaren’s ‘Sports Series’, following the 570S coupe, entry-level 540C and more luxurious 570GT. Rumours persist of a hardcore 570LT (Long Tail) in development, too – something those cheery PR folk refused to deny.

The Spider arrives fresh from its public debut at Goodwood Festival of Speed: a new Brit hero taking its bow at the de facto British motor show. Here, under the scorching Spanish sun, it looks even more stop-in-your-tracks sensational: a wedge of angular, aero-sculpted aggression.

The bright Curacao Blue paint helps: it’s one of two new colours currently unique to the Spider, along with Vega Blue and Sicilian Yellow. But the most obvious change is, of course, the roof. It’s an acrobatic composite hard-top, similar to that of the 650S Spider, that flips and folds between two Speedster-style humps behind the seats. The whole shebang takes 15 seconds, and can be activated at speeds of up to 25mph. A retractable glass rear window doubles as a wind deflector.

With its top up, the Spider looks little different to the 570S coupe. Only those with a Ron-like eye for detail will spot the raised rear spoiler; it’s 12mm higher to account for the reprofiled roof, and almost identical to that used on Track Pack cars.

There’s an invisible 46kg weight penalty, too, but, the 1,486kg McLaren is still 284kg lighter than an Audi R8 V10 Plus Spyder. And there’s no loss in structural rigidity, despite the absence of any additional bracing. Thank the carbon fibre MonoCell II chassis, which alone weighs just 75kg. 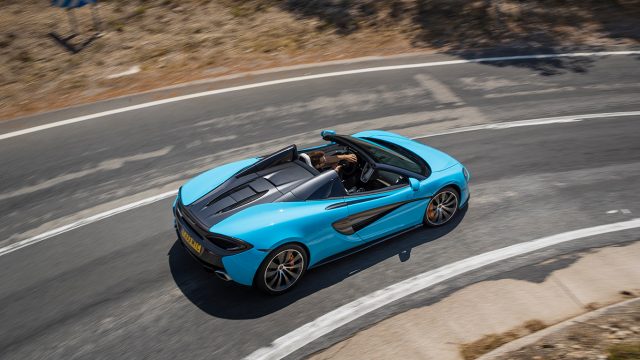 There’s no measurable difference in performance versus the coupe either. With the same 3.8-litre twin-turbo V8, both hit 62mph in 3.2 seconds and a 204mph Vmax, although the Spider runs out of talent at 196mph with the roof down. Oh, and fuel economy and CO2 emissions are identical, too: 26.6mpg and 249g/km. Not that supercar buyers care about that stuff.

The 570S Spider is on sale now, priced at £164,750, with deliveries due from August 2017. A series of 400 high-spec Launch Editions, each with a numbered plaque, has already sold out. So, unless you’ve already paid a deposit, you’ll be joining a long queue.

Rivals are many, and include the aforementioned Audi, plus fresh-air versions of the Aston Martin Vantage, Mercedes-AMG GT, Porsche 911 Turbo and – for a few dollars more – Lamborghini Huracan and Ferrari 488. 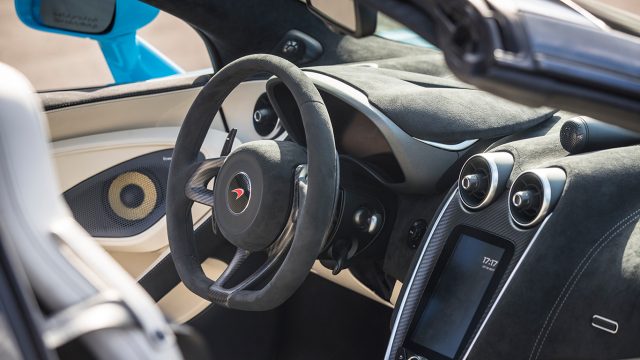 I lift the upwards-opening dihedral door, grasp the windscreen header rail and drop unceremoniously into a cosseting bucket seat. My palms caress the lovely, Alcantara-wrapped steering wheel as my fingertips find the paddles for the seven-speed gearbox (there’s no stick-shift option).

The interior feels familiar, yet still supercar-special – helped, admittedly, by £2,250 of added carbon fibre on our test car. There’s McLaren’s bespoke switchgear (good) and its equally bespoke portrait-style touchscreen (not so good). And front-and-centre is the large rev counter, redlined at 8,200rpm. I hold down the button and the roof arcs upwards, then disappears in the rear-view mirror. The cabin floods with clammy mid-morning heat. Time to go.

The V8 fires with a brusque bark, then settles to an insistent idle. It’s loud and proud, but there are no throttle-blipping theatrics. This isn’t a Lamborghini, remember. The sound is amplified by the optional sports exhaust (£3,370), plus a resonator within the roof storage area that’s unique to the Spider. Did I mention the lack of roof? Yes, that pumps up the volume, too.

Not that the people of Barcelona mind. As we cruise congested streets, cameras point, heads swivel, mopeds swerve and horns toot in appreciation. Everyone loves a primary-coloured supercar – and in the Spider, this attention also seems amplified. 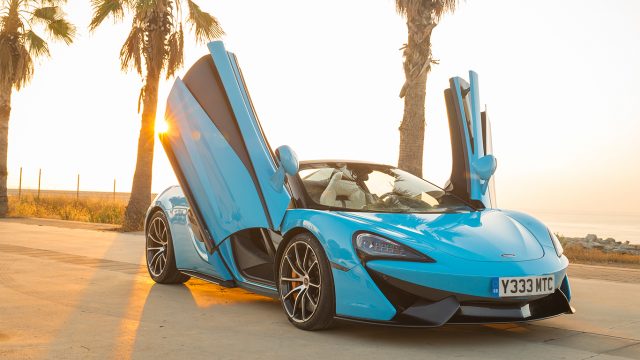 Cities are hardly the right habitat for a 570hp mid-engined missile, but that’s where many McLarens will spend much of their lives. It’s reassuring, therefore, to discover how easy the Spider is to thread through traffic. Its plunging windscreen provides a panoramic forward view, the peaks of those curvaceous front wings helping you to place the car accurately. Even parking shouldn’t cause palpitations: wide door mirrors and a flat rear deck see to that. However, we’d strongly recommend the £4,090 Security Pack, which includes a suspension lift system for clearing speed humps (essential in Barcelona), plus front and rear parking sensors and a reversing camera.

Unlike some rivals, such as the 911 Turbo, the 570S rewards its driver even at urban speeds. McLaren deliberately foregoes the CO2 gains offered by electric steering for a hydraulic set-up, and the wheel simply fizzes with feedback. Product manager Tom Turner talks of the ‘50-metre test’ – the theory espoused by Ford chassis supremo Richard Parry-Jones that a car should feel ‘right’ within the first 50 metres of driving. The 570S Spider does.

Indeed, all the major controls – gearshift paddles included – move with a tightly-honed deliberation that feels deliciously analogue. Even ride comfort is perfectly acceptable, albeit less forgiving than the hydraulically-suspended Super Series McLarens, including the new 720S.

Taking on the F1 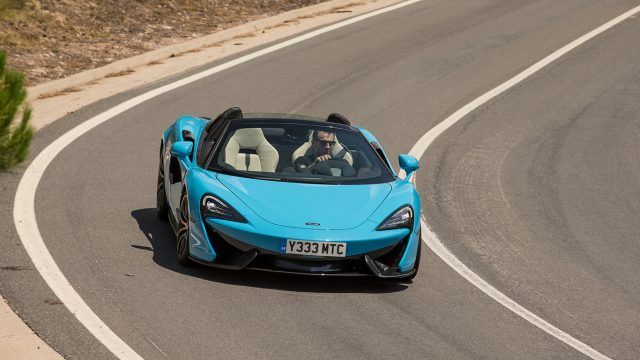 But let’s not kid ourselves: we didn’t come all the way to Spain to pootle around the suburbs. So we hit the autopista and head for the mountains, and the kind of roads that look like furious back-and-forth scribbles on the sat nav screen.

Holy moly, this thing’s fast. Unleashing the full fury of that flat-plane-crank V8 feels monumental, its raucous roar building to a high-octave howl as you feverishly grab the next gear. I drove a 570S coupe on-track earlier this year, yet, once again, I’m taken aback by its raw, relentless speed. This is McLaren’s junior sports car, note, and its cheapest convertible ever. But it offers on-paper pace to match the epochal F1: the money-no-object hypercar that, some 25 years ago, launched McLaren as a maker of road cars. 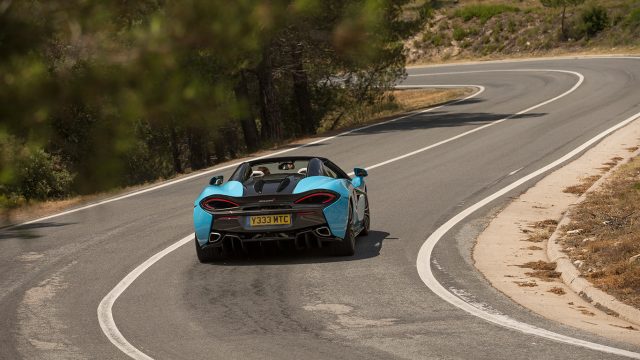 Equally, driving the tyres off an F1 – a car with no electronic aids, not even ABS – requires serious skill. But even a wheelman of average ability (i.e. yours truly) can get the best, or near-as-dammit, from a 570S Spider.

Its carbon-ceramic brakes are easy to modulate, but brick-wall brutal when needed. And its chassis is playful, yet predictable, without the active aero that raises grip limits – and thus the consequences of getting it wrong – in Super Series cars. When I say it feels like a 570hp Toyota GT86, I mean that as a compliment. Even on soft-compound Pirelli P Zero Corsa tyres, it’s a car you can explore and exploit, at least in the dry, without undue fear of a heart-in-mouth moment.

Climbing a series of hairpins in the shadow of Monserrat, I switch from Sport to Track mode and feel the car tense. Gear changes are head-jerkingly quick now, the damping firmer and more focused. My concentration is dialled up, too, eyes always straining ahead to the next apex. Brake, turn, whoosh, repeat…

Time stands still and it’s just me, 570 horses and the road. This is a drive I’ll bore my grandchildren about. Hopefully I haven’t bored you.

Top of the convertible class 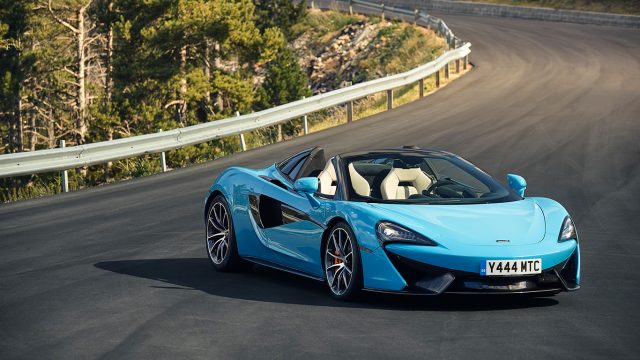 When MR’s Richard Aucock drove the 570S in 2015, he described it as ‘unquestionably a five-star car, without doubt a new sports car great’.

The Huracan is still king if you like to show off, and the R8 offers 90% of the fun from up to £35k less. But for those who buy a supercar to drive, and hang the cost – to get up before dawn, forget A-to-B and just go, the McLaren goes straight to the top of the class.