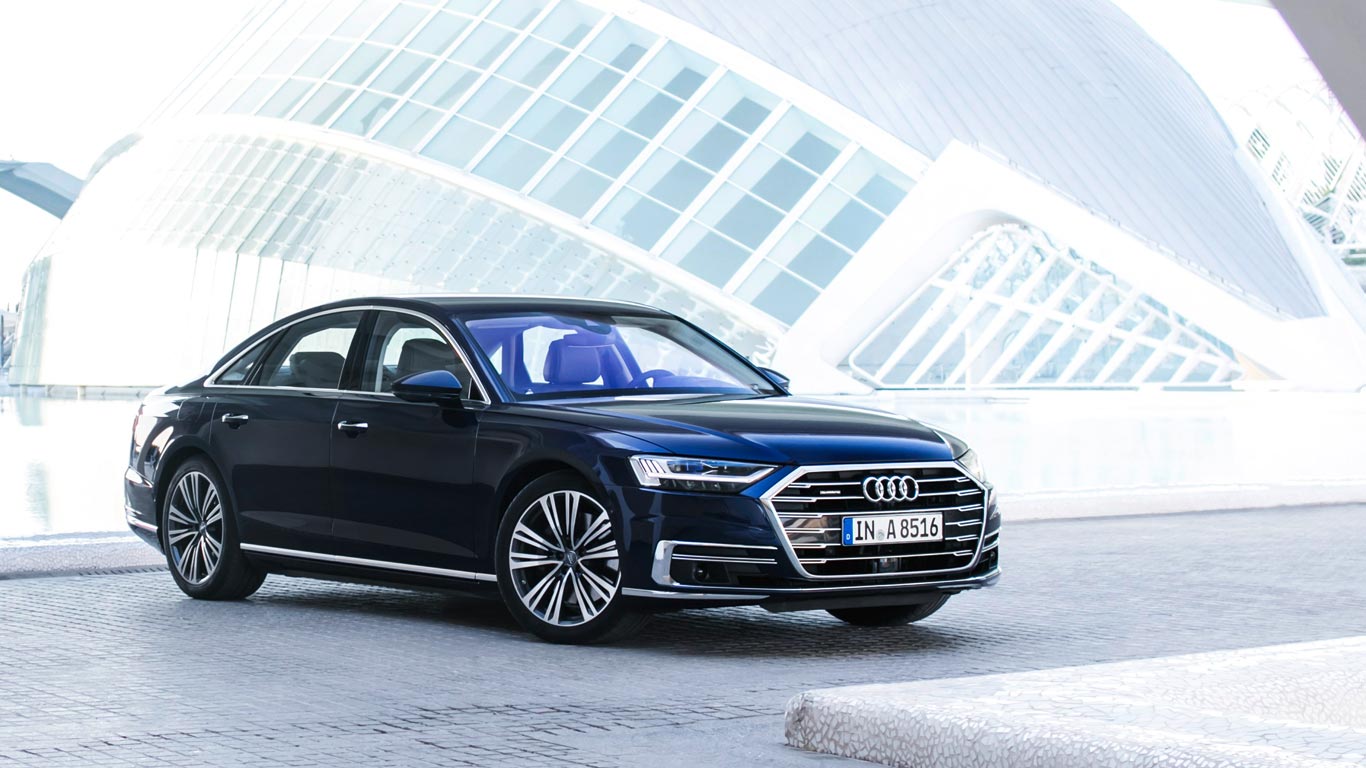 ﻿Sorry Jaguar and Lexus but the holy trinity of luxury saloons, on the common sense side of Bentley and Rolls-Royce, are the Mercedes-Benz S-Class, BMW 7 Series and Audi A8. Whether you drive yourself, or more commonly sit behind a chauffeur, these three models are what the world really wants.

Actually, you can narrow it down more tightly than that. It’s the S-Class that’s the default choice. If you’re buying without thinking, there simply doesn’t seem to be a viable competitor to the big Benz. Naturally, the other two hate that narrow-minded viewpoint. So, for 2018 there’s a brand new Audi A8 which, from our initial experience in Valencia, certainly should open more minds to possibilities away from the Mercedes. 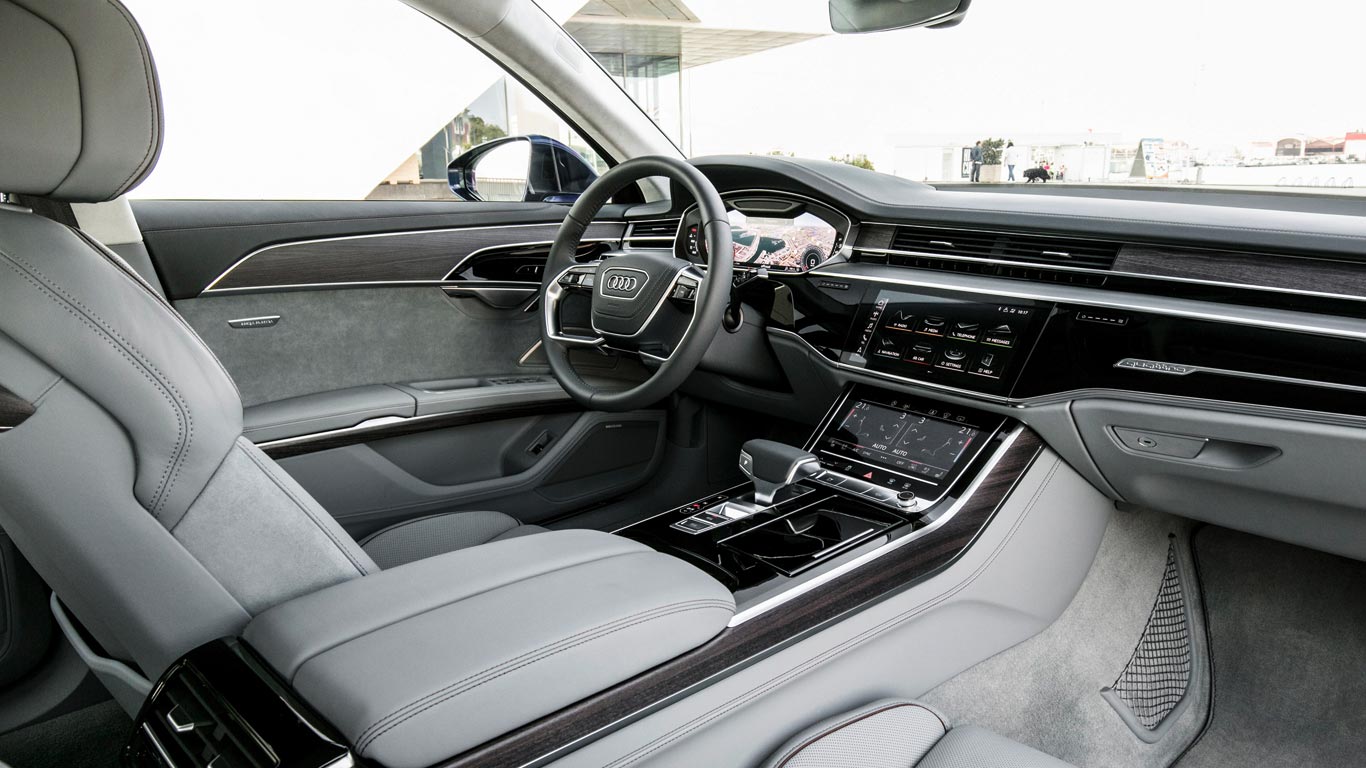 You can load a car to the gunnels with equipment, but what the A8 needed most was a magnified presence, to become a limo that stood up and was immediately noticed. We reckon Audi’s achieved that, via the increased size, more muscular approach and the even larger grill on the upright front end. While the days of elegantly swoopy noses seem to have disappeared for good, Audi has instead made the new A8 almost statesman like – exactly what’s needed to make it stand out.

The body is, as always, aluminium for strength and lightness, but there more of it. Legroom in the rear is increased and there’s an option of the A8L, with extended wheelbase that gives room for a real stretch out. Luggage space is the same as before at around 500 litres, very similar to the BMW and Mercedes. 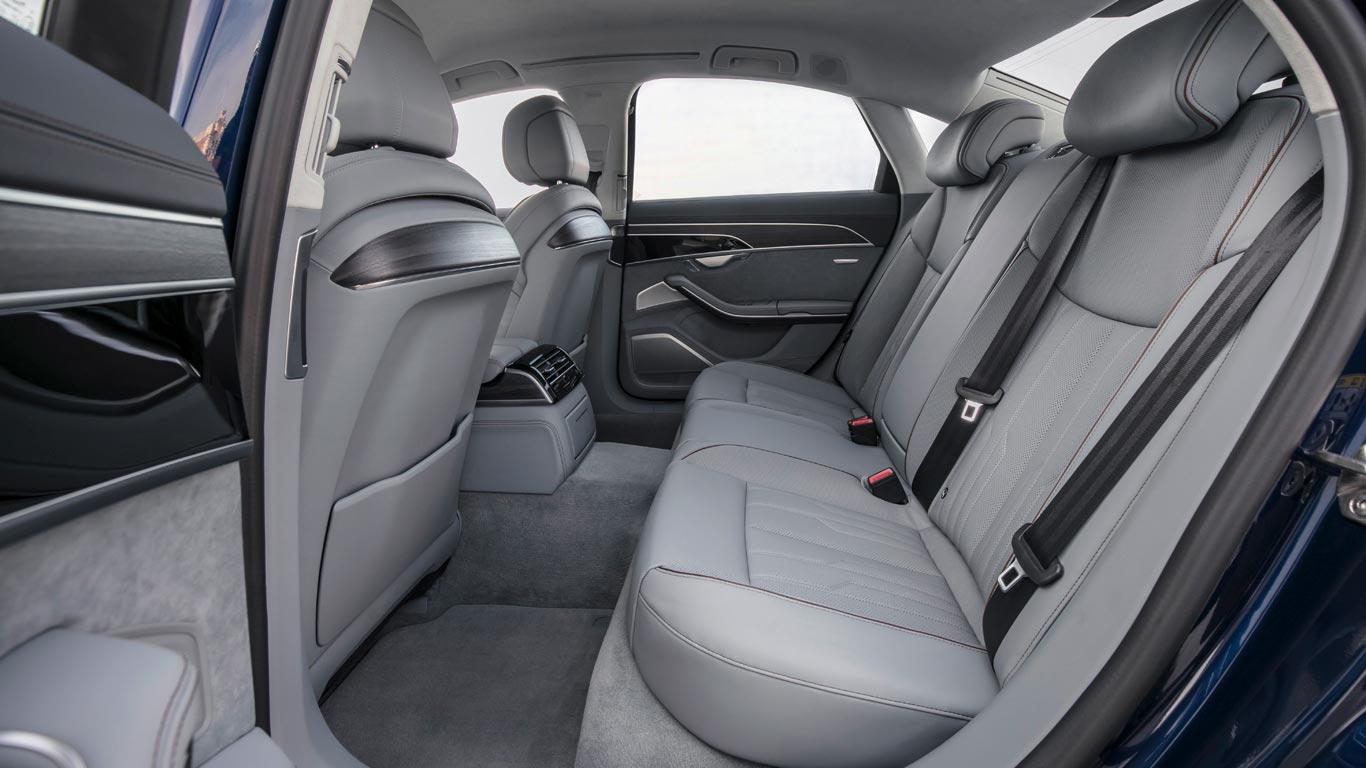 Surely this is a real raison d’etre of such cars, and here the A8 is simply superb. From the soft leather seat surfaces, through the well-judged support, to the pillowy ride from the air suspension, this is an extremely comfortable way to travel. Tick a few boxes and the rear seats will recline and massage, the front seats pump cool air as well as heating, and you can watch TV on the privacy of your own rear screen, while using the on-board Wi-Fi.

The doors have soft closure, so if you find slamming a car door too uncivilised, simply pull it gently and the motors will take over. And goodness, does the A8 have a lot of electric motors. The central dashboard air vents are partially hidden until you ask for more volume, then they power open. Countless motors power the seat functions, pumps for this and that, and so on. 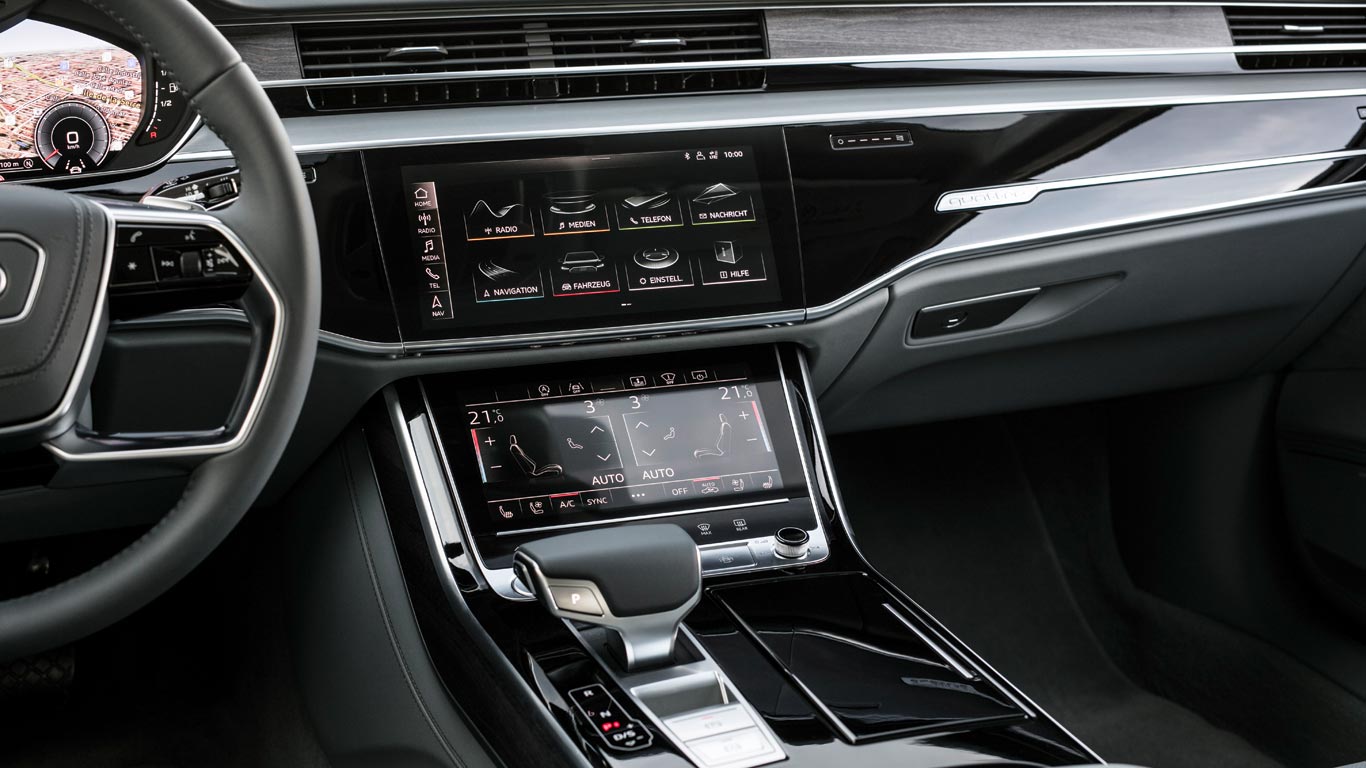 Audi has achieved something rather lovely here. The facia and door areas are all smooth, elegant lines with a smattering of ash, but the big change is where the driver and passenger interface with the systems. Pretty well every traditional button has been superseded (the exception is for the front seat controls which are out of the natural eye line). Two sophisticated glass screens are mounted in the centre of the A8, the upper a master panel containing the usual satnav, phone and media requirements, the lower dealing largely with the climate control.

Now these touchscreen devices can, as we all know, be a nightmare to operate when driving, but Audi has overcome the obvious hurdles to come up with a system that is both functional and especially neat and stylish. Even the volume control for the fresh air vents is a glass slider on the dashboard. It will certainly be a talking point for passengers impressed by tech.

Audi’s delightful Virtual Cockpit, which gives a vast choice of impressive instrument designs at the touch of a “button”, is standard. If heads-up display is a chosen option, the satellite navigation screen can be shown at four different places at the same time! Even Audi will admit that’s overkill. 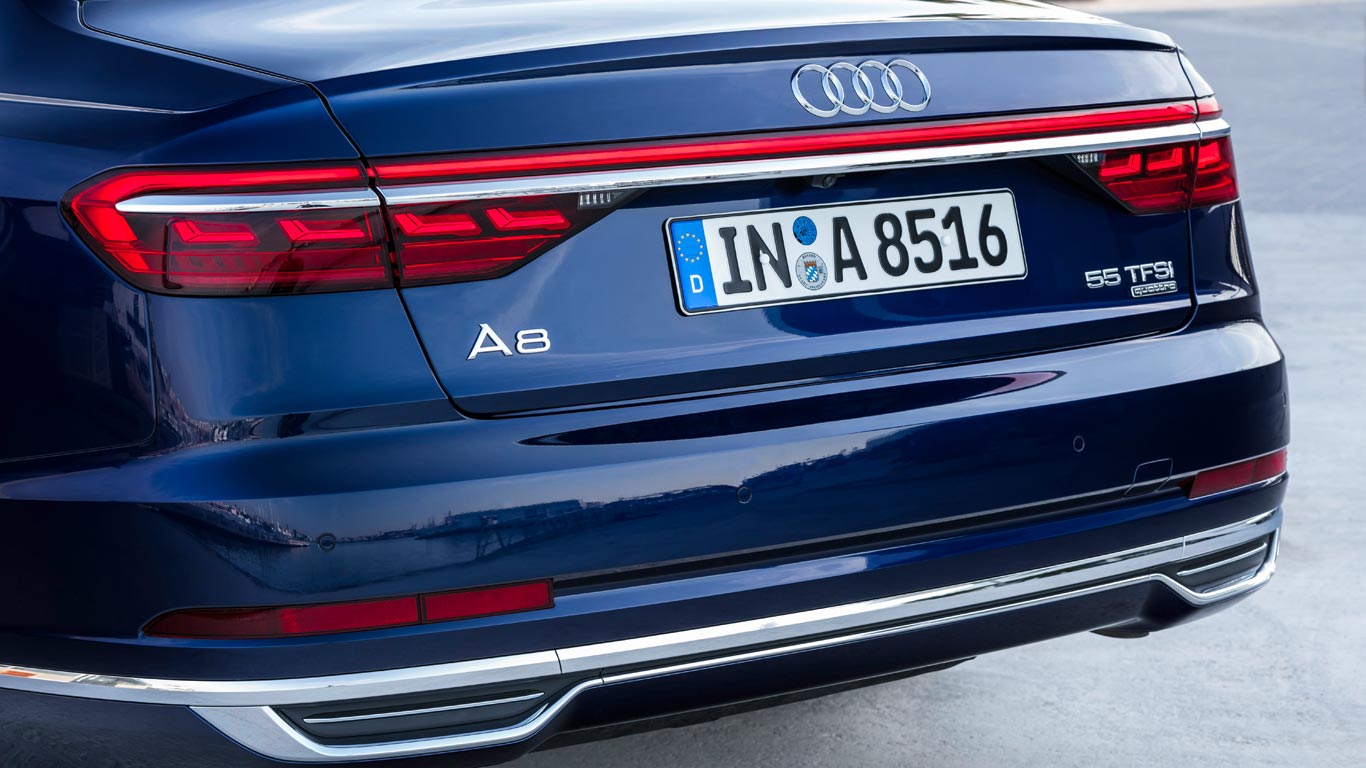 You should be told about the laser/led headlights, the fact that you can’t open a door if a cyclist or car is coming past, or swarm technology that takes traffic info from other nearby Audis and adjusts the navigation route. Then there’s wireless charging module for the floor of your garage or driveway, which means your plug-in hybrid A8 no longer, has to be… plugged in.

There’s much more, including the more commonplace systems to warn if you wander out of your motorway lane and to cover the blind spot over your shoulder that the mirrors don’t cover. Like setting your phone’s NFC to open and even start the A8 for you. The number of driver assistance systems has risen to 40. 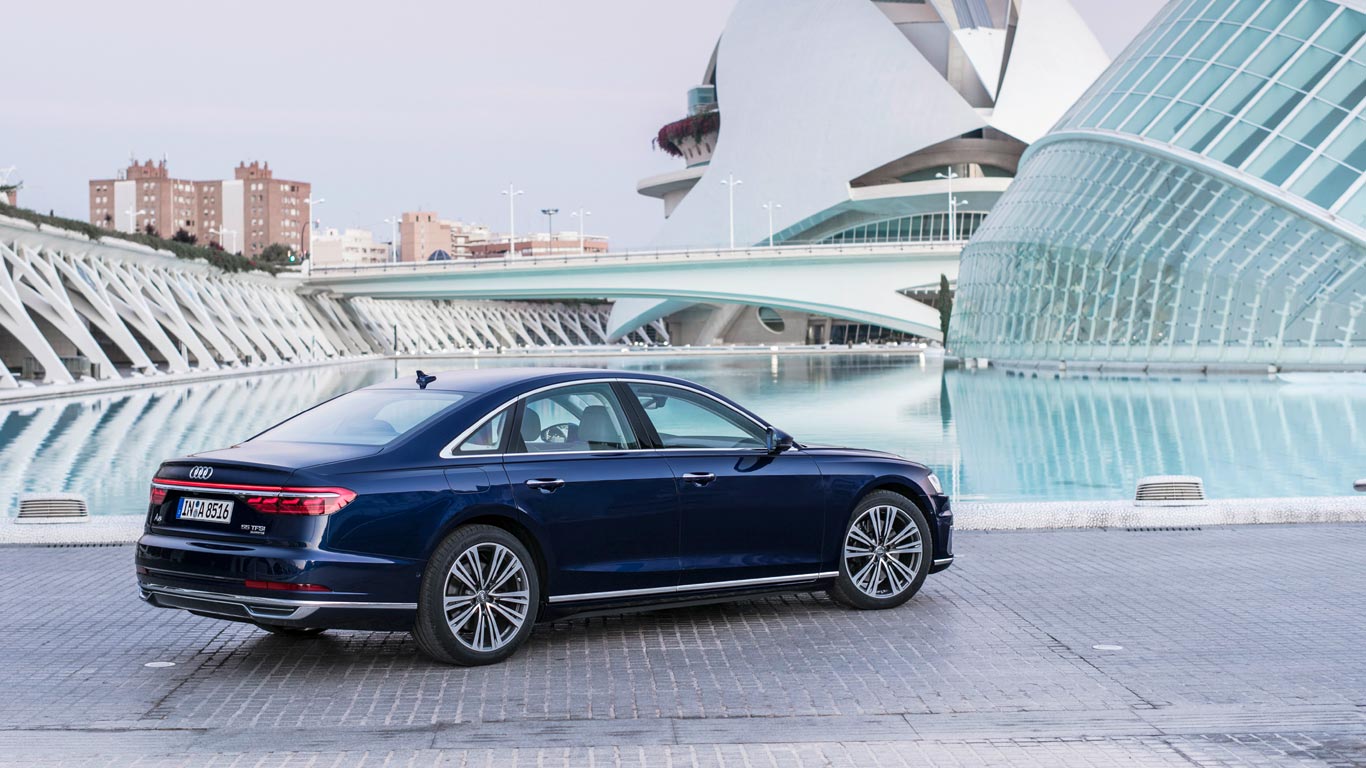 But the really big deal is the in-built preparation for artificial intelligence. The A8 is, Audi says “the world’s first volume-built car developed for highly automated driving”. In simplest terms, the ‘traffic jam pilot’ can take over in heavy traffic at speeds of up to 60kph (38mph) on dual carriageways and roads ‘with a central barrier’.

The driver can then relax, answer text messages, watch a video, the possibilities are endless, as long as he or she is ready to take over when the situation requires.

There’s an issue, however, and it’s a big one. Only when individual regularity authorities allow the use of AI cars can the A8’s system be instigated. Currently that’s nowhere. In the world. Full marks to Audi, though, for pushing the game along. And at least you can use the fully automated parking facility. 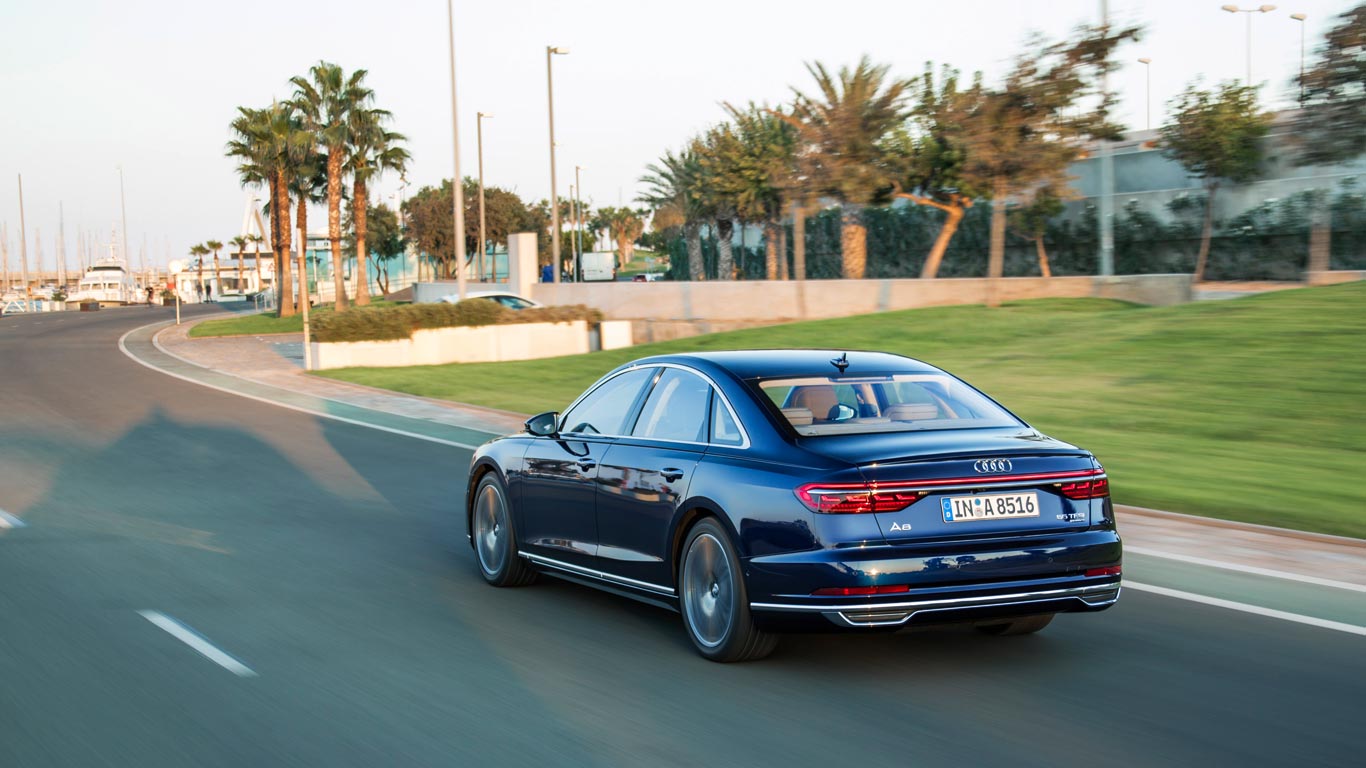 It’s a little odd to leave driving impression to the very end, but this is a car that’s far more about the big experience than simply enjoying yourself behind the wheel. And for all the adroitness of the chassis, the A8, like the 7 Series and S-Class, is a very wide car that’s imposing to drive cities.

It’s hardly befitting for a luxury car to offer gun-slinging performance, but every model will accelerate to 62mph in under 6 seconds, which is certainly adequately fast. All engines are coupled to an eight-speed automatic transmission which is seamless in its efficiency, in any of the five drive programmes offered.

The 3.0-litre V6 petrol (confusingly called the A6 55 TFSI, for reasons even Audi struggle to explain) is zingy and free revving and, if you enjoy the sporty nature of a powerful petrol engine, is the engine of choice. Yet the diesel 3.0 50 TDI picks up more quickly when you need instant acceleration and remains remarkably refined much of the time.

Quattro four-wheel-drive is standard so the grip is reassuring however fast the A8 is driven into corners, even though agility through the bends hardly seems the point. It’s in wet and slippery conditions that the quattro really comes into its own.

The air suspension adapts to your driving style; it’s extremely smooth, as it should be. Audi also offers the A8 with the option of rear wheel steering, which helps when manoeuvring the long-wheelbase version into tight spaces. The downside is that it feels a little odd on winding roads until you get accustomed to the back of the car do its own job of getting you around the corners.

But not as odd as the active suspension option. Via lasers, this reads the road surface ahead and makes small adjustment to the suspension height to keep the A8 entirely level. Trouble is, it also seems to knock the edge of the super-smooth ride quality of the standard car. 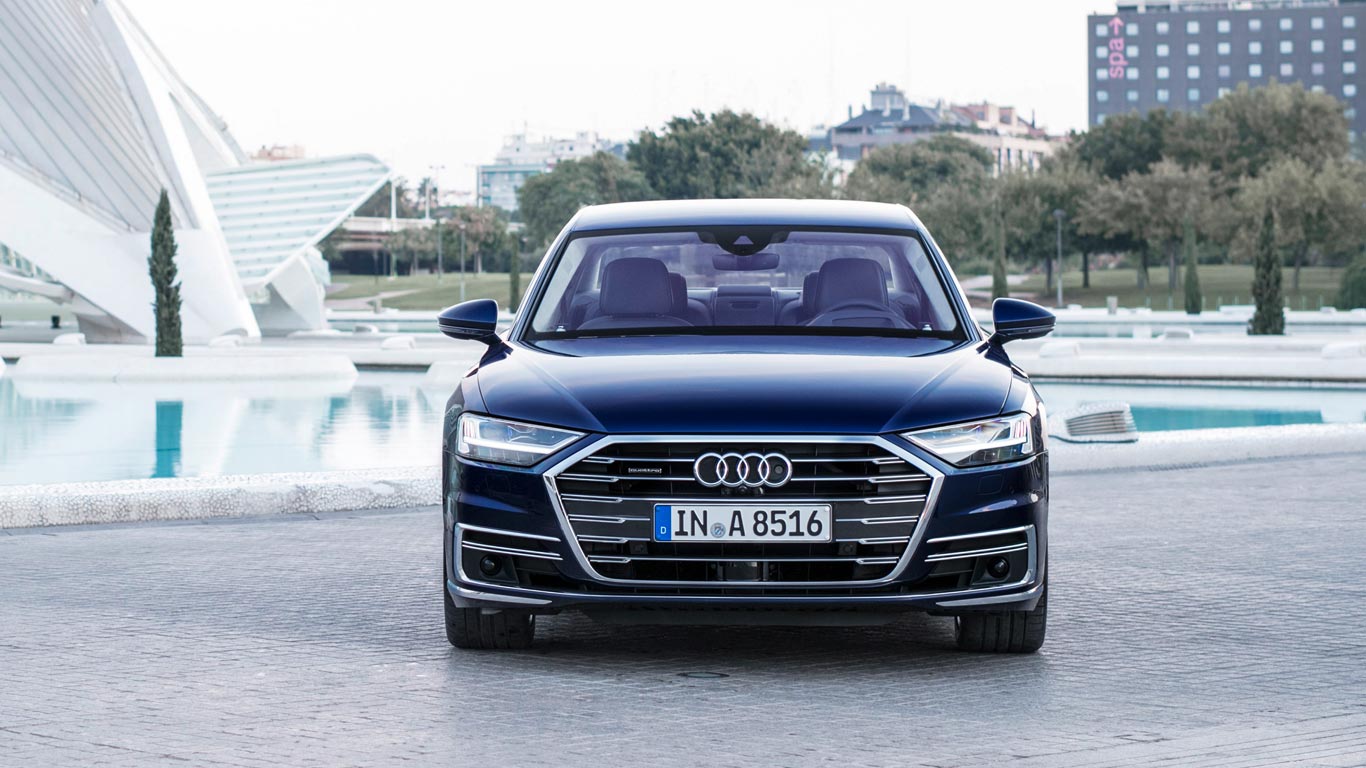 The Audi A8 is a deeply impressive machine. It fulfils demands for luxury, space and discrete performance, and now has a statesman-like appearance that at least makes it the equal of its rivals, and a viable alternative to the Bentley Flying Spur. Whether all this will be enough to entice more buys into the A8 fold, however, remains to be seen.