We get a first look at the 268mph Czinger 21C hybrid hypercar – and ask company CEO Kevin Czinger CEO what comes next. 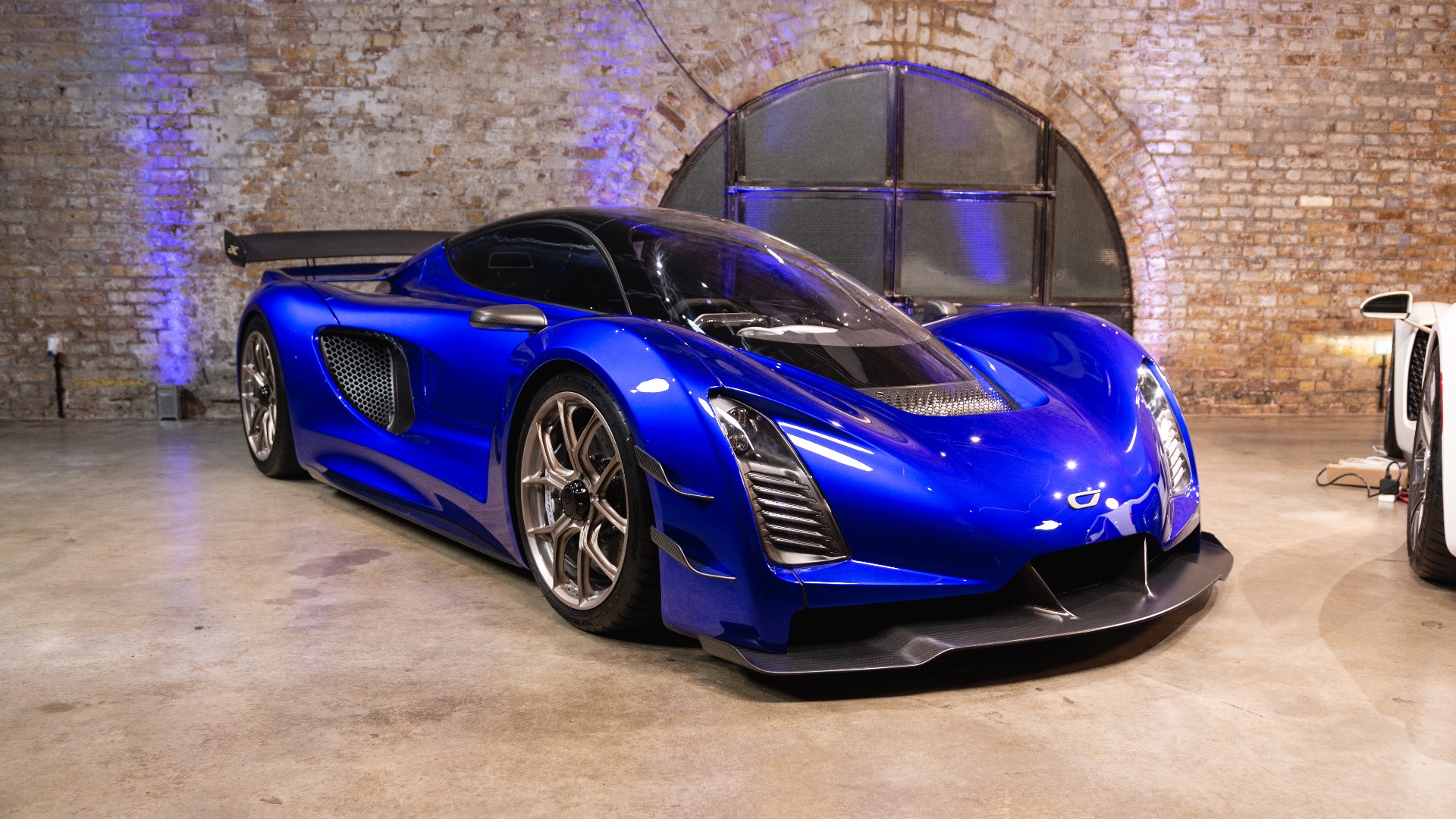 From hipster beards to cafes selling breakfast cereal: plenty of trends have started in Shoreditch. Many have ended here, too. Tonight, however, this fashionable East London enclave had once again witnessed something new. And the Czinger 21C is more than just a car. It could be a ‘hit reset’ moment for the whole industry.

Even a game-changing hypercar can’t defeat the coronavirus, however. The 21C was due to debut in Geneva earlier this month, but Covid-19 had other ideas. Thus, the launch was moved to London, where I had chance to speak with Kevin Czinger (say it ‘Zinger’) about his car and company. 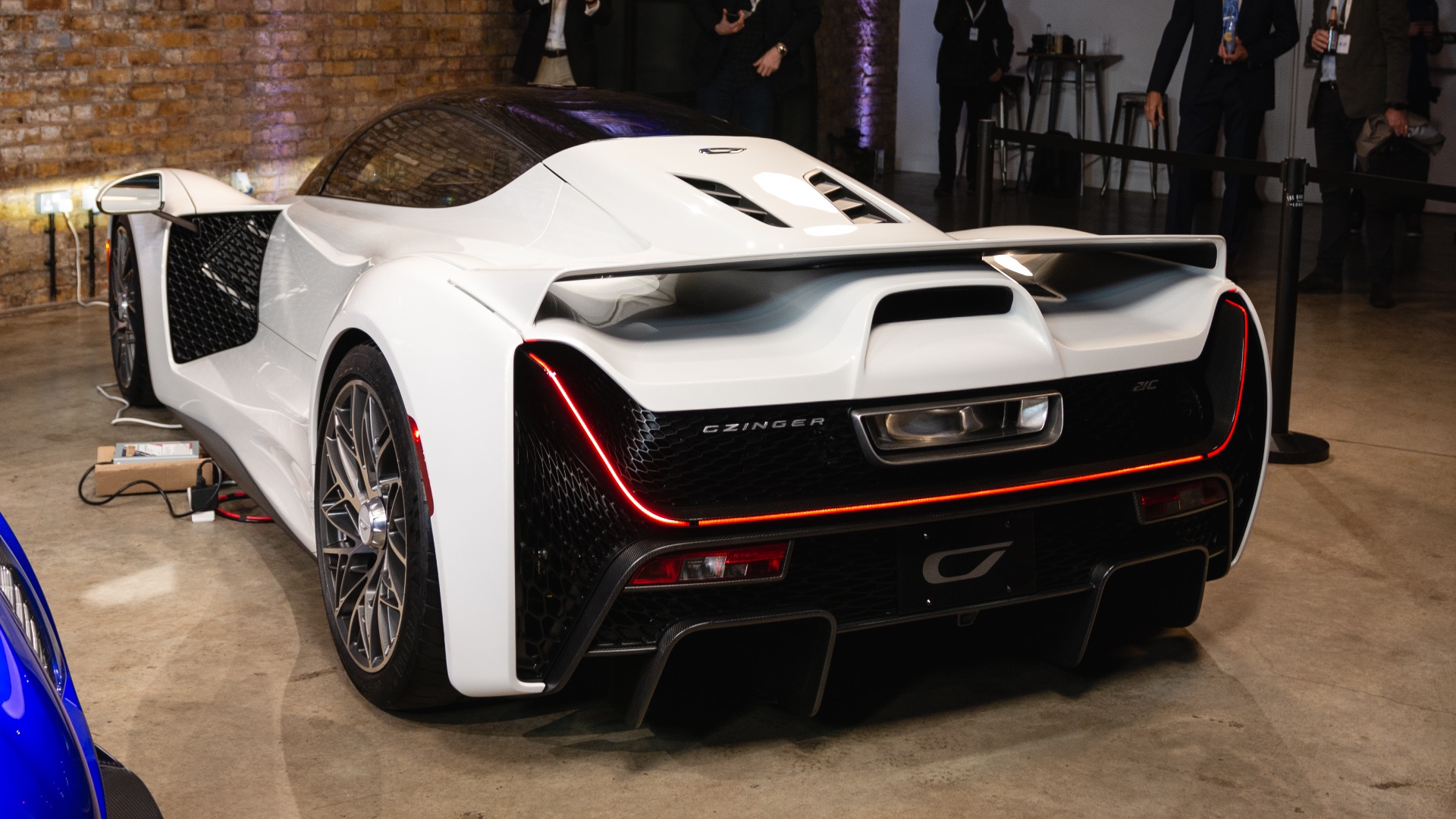 A little theatre before we begin. The lights are dimmed and a V8 scream fills the speakers. Two cars appear in the spotlights: one road-ready (white), the other in ‘lightweight track configuration’ (blue). With in-line seating – Kevin calls the passenger a “co-pilot” – and styling that’s a mélange of “SR-71 Blackbird spy plane, Top Gun F-15 fighter jet and pod racer from Star Wars: The Phantom Menace,” they look like absolutely nothing else.

World debut of the Czinger 21C in London.

The numbers are otherworldly, too. A 2.88-litre twin-turbo V8 drives the rear wheels via a seven-speed automated manual ’box, while two electric motors with torque vectoring power the fronts. Combined output is 1,250hp, with a power-to-weight ratio of one horsepower per kg. That means 0-62mph in 1.9 seconds, a quarter-mile in 8.1 seconds and 268mph flat-out (236mph in high-downforce track spec). Still, it’s the notion of 0-248mph-0 in 29 seconds that frazzles my brain. 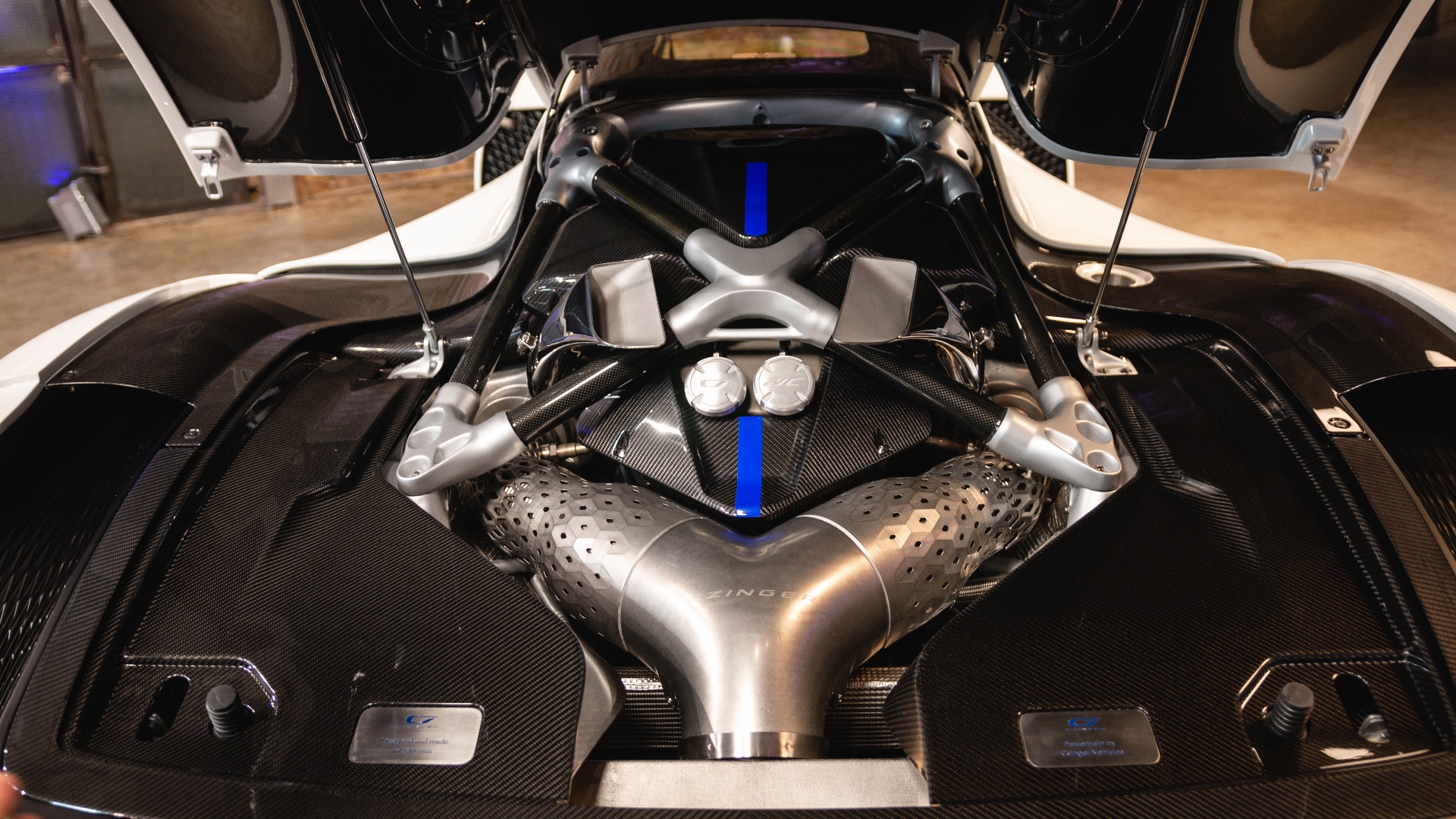 Kevin doesn’t mince his words. “Until now, these vehicles could only have existed in our minds,” he says. “The 21C pushes the limits of what man can achieve.” His Californian chutzpah is a tough sell to a cynical British hack, but I can’t fault his ambition. “We’re not solely a hypercar company,” he explains. “Our goal is to create one of the great enduring brands of the 21st century.”

The start of that journey is the 21C and Czinger hopes its 3D printed production could shake up the industry. The process uses complex computer algorithms to calculate data such as material strength, weight, stress and cost, then build up an optimised part from metal or composite. It’s a world away from huge factories packed with metal stamping presses and welding robots, offering far greater flexibility and less investment upfront. 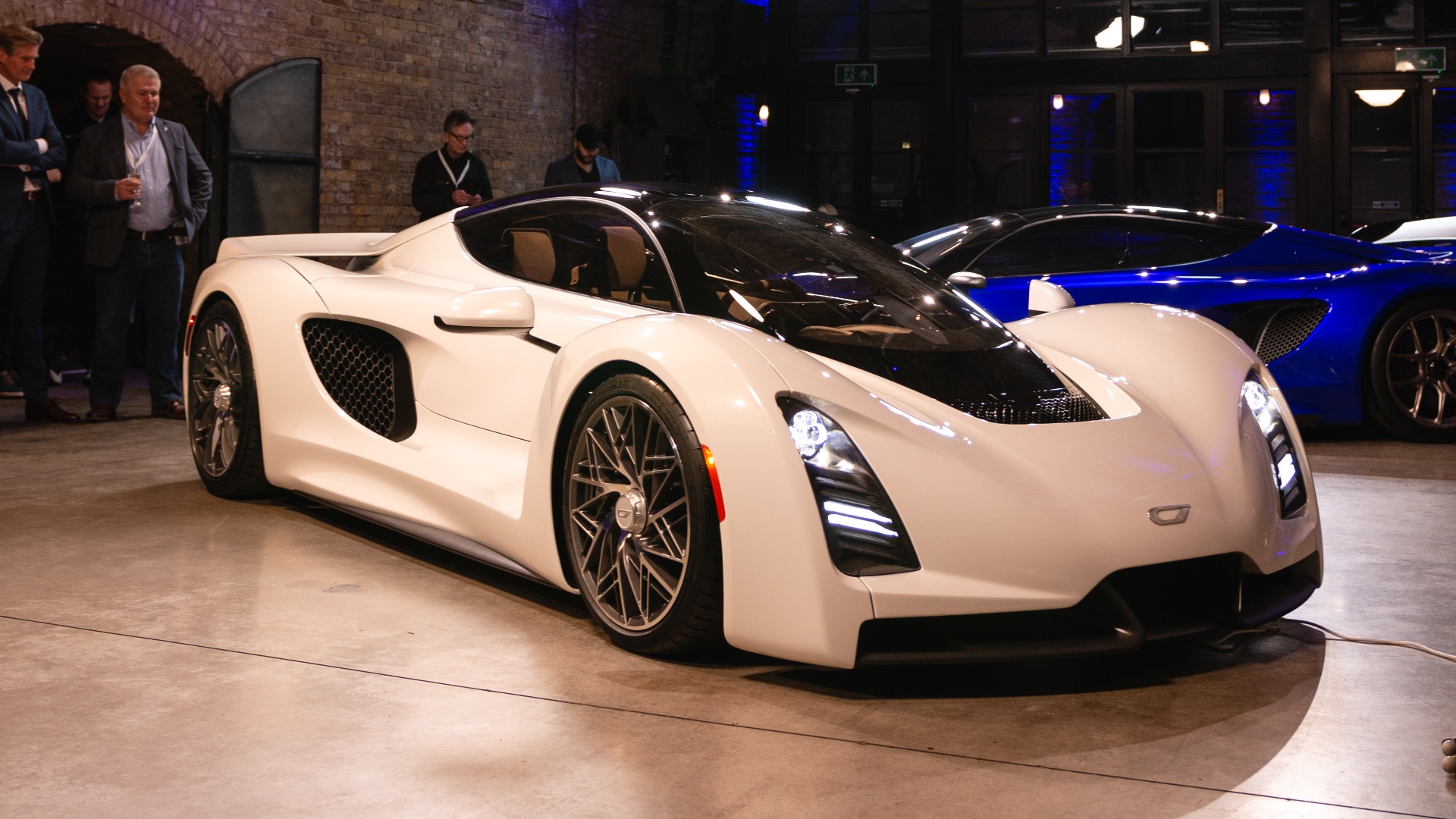 Despite Czinger’s hints of “new, more affordable performance cars” in development, I get the sense the 21C is primarily a shop window for this innovation. Think how Rimac uses the C_Two to promote its electric expertise, then makes much bigger margins selling the tech to major manufacturers. Kevin freely admits Czinger is working with “several big automotive brands”, while his contacts book must be something to behold. Senior execs from Apple, Boeing, Google, and SpaceX all helped with the project.

‘Hypercar’ and ‘sustainability’ aren’t two words you usually see in the same sentence, especially when a combustion V8 is involved. But Kevin is keen to talk up the 21C’s green credentials: “This vehicle is built to be in harmony with our planet”. Refuel with methanol from sustainable sources and the powertrain is zero-emissions. “We need to get away from thinking electric cars answer every need,” he says. 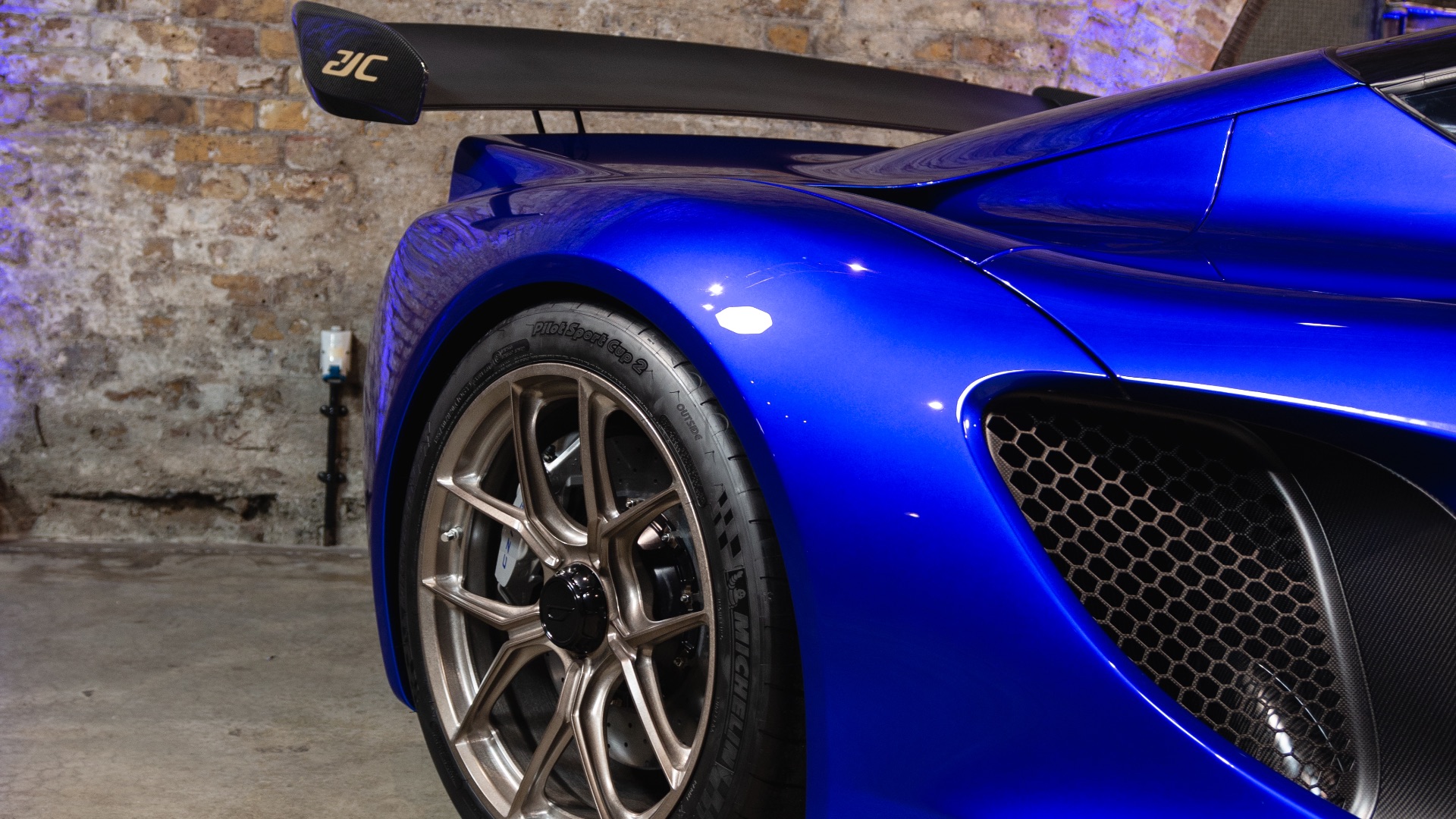 For all his tech nerdery and business nous, though, Kevin remains a car guy at heart. “I read Motor Trend and Hot Rod as a kid,” he recounts, “and built hot rods with my brothers. I’ve always loved cars.” This one is “designed to hunt for track records,” so expect an assault on the Nürburgring before the year is out. It will also take on the hill at Goodwood Festival of Speed this summer – and Motoring Research will be there to film it.

Only 80 examples of the 21C will be made. And while prices haven’t been announced, you’re unlikely to see much change from £2 million. Yet whatever your thoughts on unobtanium hypercars, it’s what the 21C represents that matters. This is Kevin Czinger’s dream made real. “It’s a vision that’s about 11,000rpm. And you can have a lot of fun with that.”

Revealed: the star cars in dealer showrooms for 2017
Read more

The Grand Tour season 3: what we know so far

Season three of The Grand Tour will hit our screens on 18 January and there's a new video game to accompany the series.
Read more

Lamborghini Polo Storico has completed restoration of one of the most famous Miuras ever built: the one-off SVR
Read more

One in four have misused a parent parking bay

Research reveals that parent and child parking bays are widely misused. And the problem is far worse in some areas than others.
Read more

Is your Volvo dirty? There’s an app for that

Volvo has developed a new smartphone app that lets you order a car wash anywhere within the M25. Prices start from £22 for a basic wash.
Read more