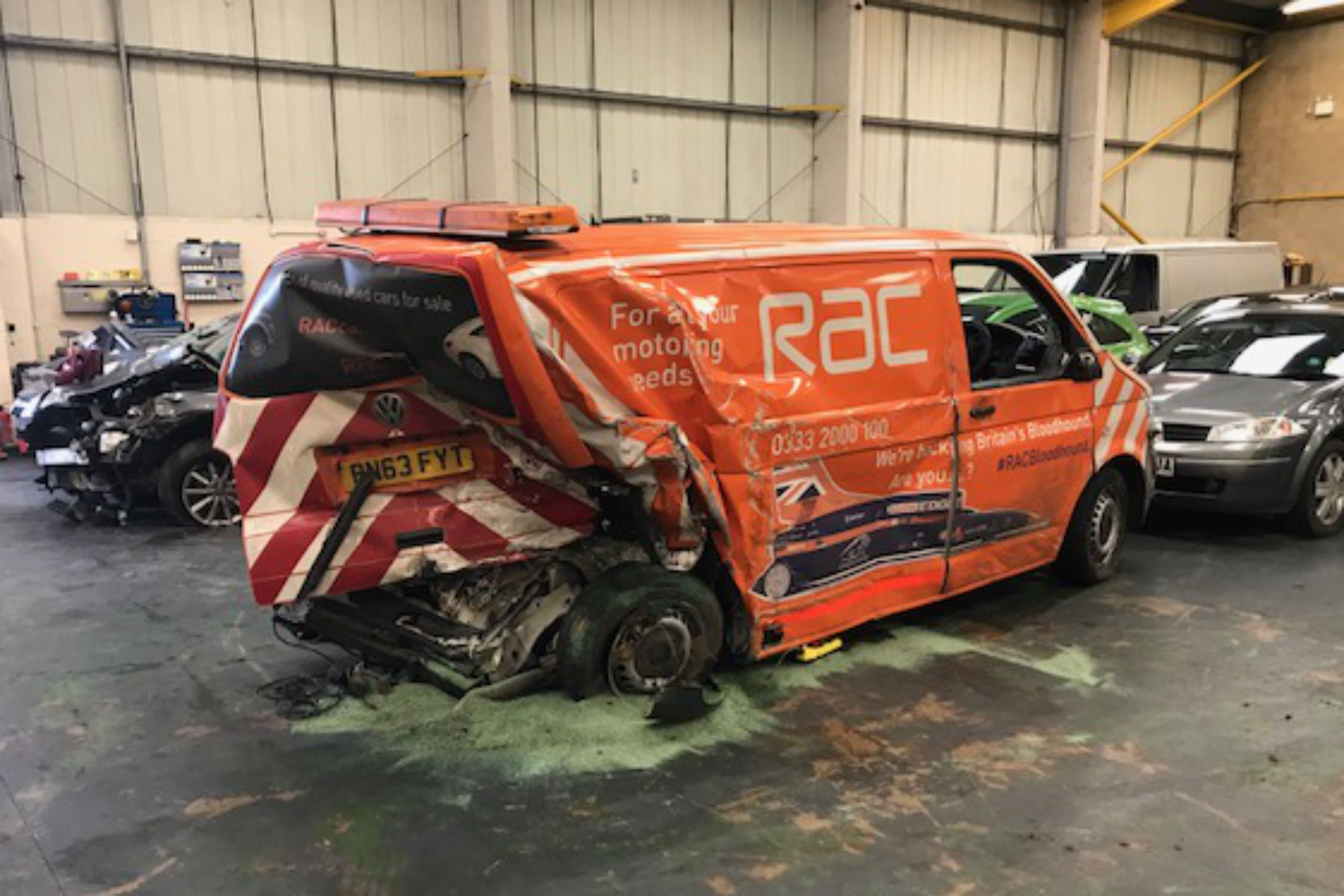 The RAC has released these horrifying pictures showing the aftermath of a crash involving one of its vans on the hard shoulder.

RAC patrol Andrew Barrett was changing the wheel on a member’s car on the M4 motorway last Thursday evening when a vehicle struck his van at around 70mph.

No one was seriously injured in the incident, although the RAC says that two roadside operators have been killed so far this year – one on the M25, and one on the M69.

It’s led to the motoring organisation launching a campaign to encourage drivers to reduce their speed and increase their gap between their car and any vehicle on the hard shoulder.

“The RAC is calling on drivers to ‘slow down, make space and move on’ when passing motorway breakdowns leaving plenty of space between their car and any vehicles and people on the hard shoulder,” said the RAC’s health and safety consultant, Steve Robinson.

“With traffic volumes rising and several recent serious accidents involving roadside assistance patrols and breakdown contractors we need motorists to consider a new approach to how they drive past stricken vehicles, drivers and passengers, and those working in vulnerable locations.

“By following this simple message we can significantly reduce the risk of a collision and, importantly, the fear factor for those standing or working at the side of the motorway.”

The RAC’s top tips for passing a motorway breakdown

Speaking about the latest incident, Andrew Barrett, who’s been a patrolman for 14 years, said: “It was horrific. One minute I was changing the customer’s front wheel, the next I heard an almighty crunch and looked up to see my van rolling over towards us and the car spinning into the live lane. It was not an experience I want to repeat and it certainly shows you can never be complacent when attending a motorway breakdown.

“I want to thank all those who assisted from the off-duty nurse who was first on the scene and swiftly joined by two off-duty paramedics and to the fire brigade, police, highways and the ambulance crew who were all brilliant.” 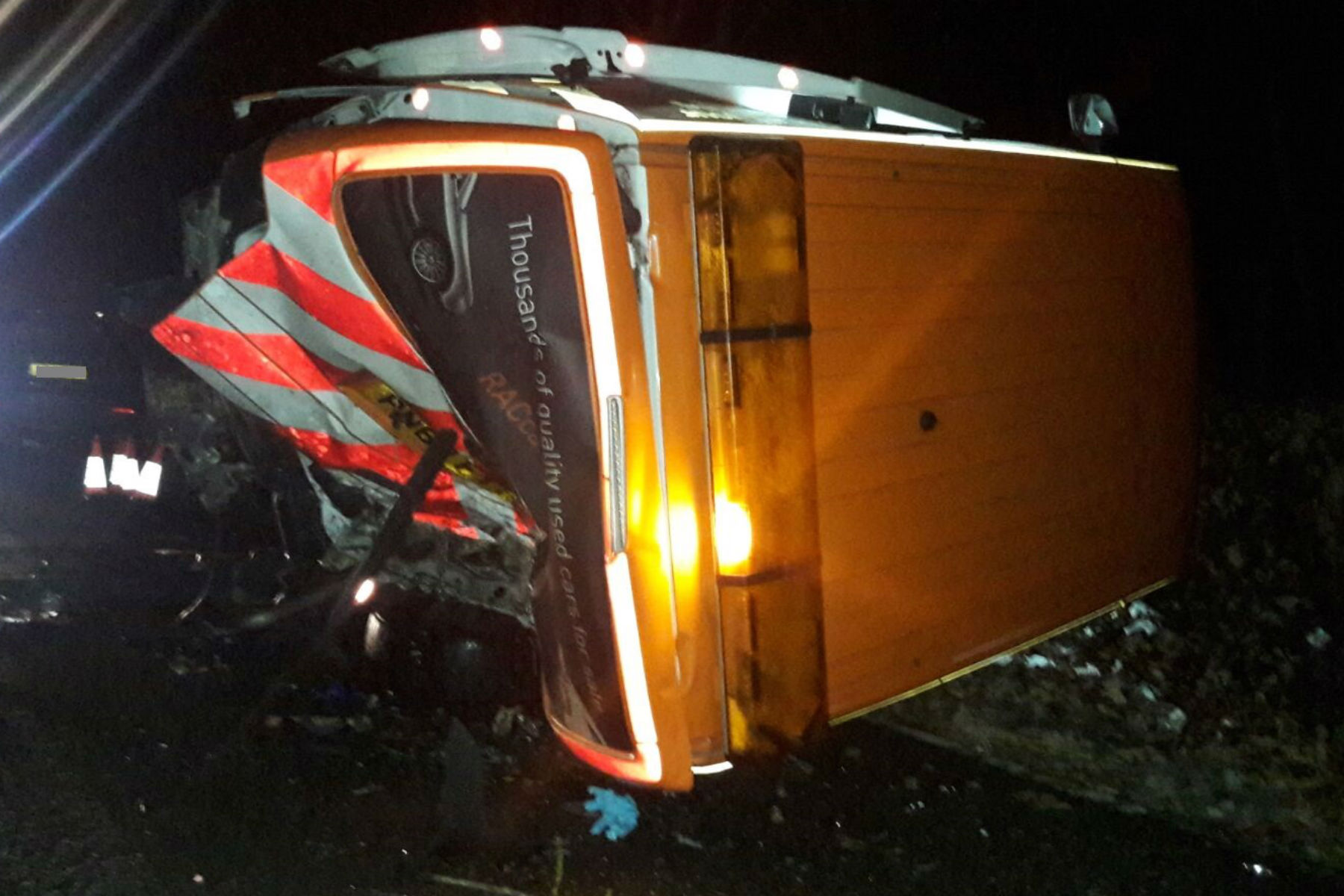 The crash caused the three-tonne RAC patrol van to be rolled as it was pushed along the hard shoulder. The RAC member struck his head and was knocked unconscious as he moved out of the way. The driver of the car which struck the patrol van, although injured, was able to climb out of his vehicle.

The westbound carriageway of the M4 was closed for approximately an hour and a half while police, fire and ambulance crews attended the scene.

Robinson added: “It is a wonder that nobody was killed. This incident serves to show how dangerous it can be for anyone who has to stop on the hard shoulder of a busy motorway. We have released these shocking photographs of the RAC patrol van as they clearly demonstrate the need for a new way of thinking when drivers encounter stricken motorists and breakdown operators at the roadside.

“Until you find yourself stood or working on the hard shoulder it’s impossible to comprehend just how frightening it can be and what it feels like when cars and lorries are passing you at high speeds. Anyone who has experienced it will understand how vulnerable it can feel and why it makes sense to slow down and move over when passing anyone – whether broken down or working at the side of a live lane.”

>NEXT: This is why you should leave your car after a breakdown