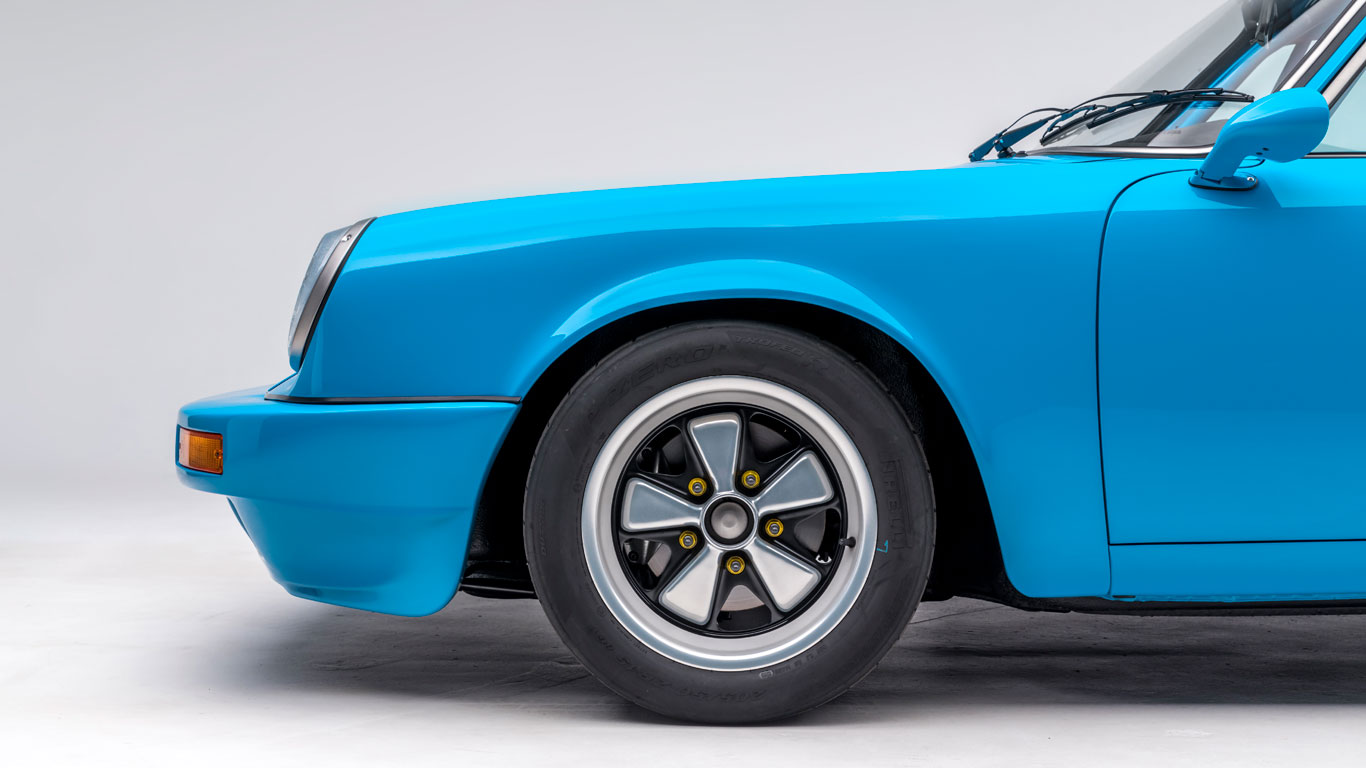 If you’re looking for holiday inspiration, may we suggest a visit to Los Angeles this summer? The Petersen Automotive Museum is hosting The Porsche Effect, an exhibition celebrating 70 years of Porsche sports cars. Here are some of the many highlights. 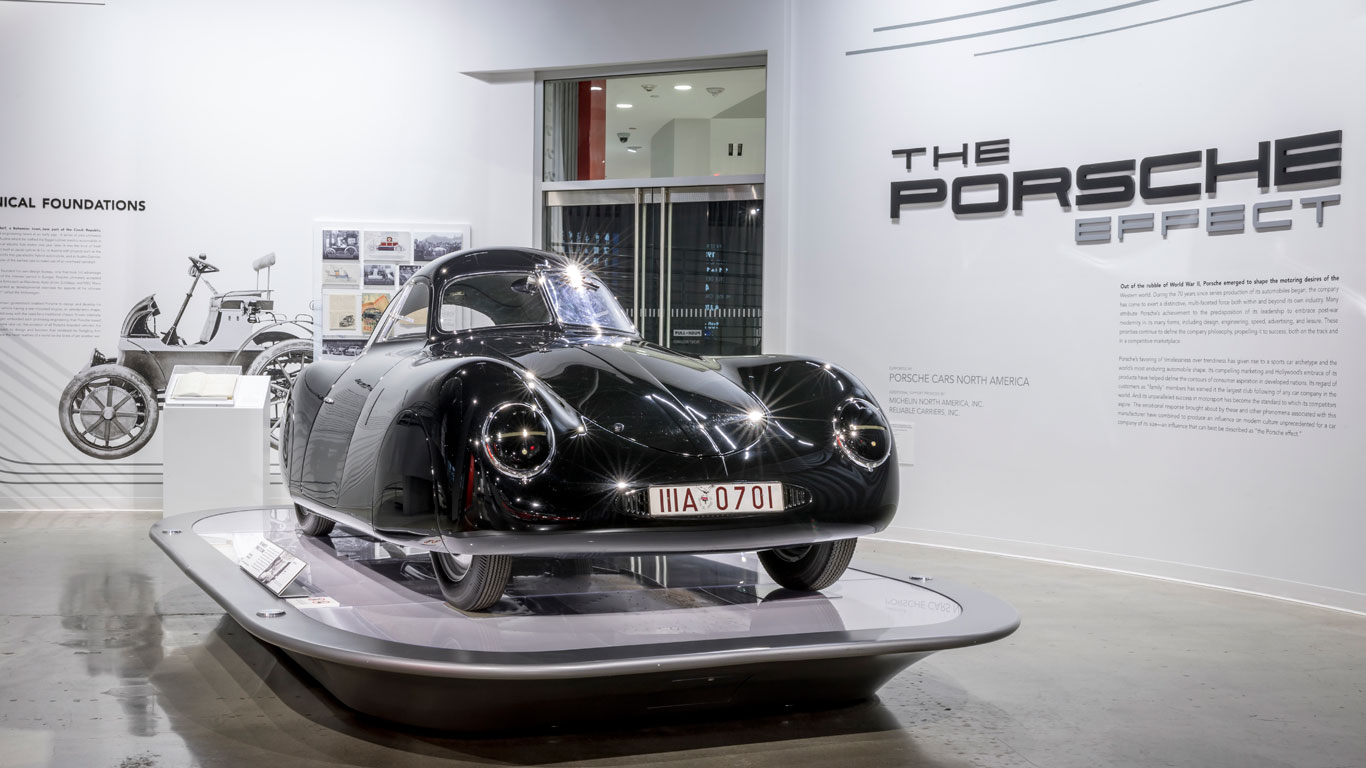 The Type 64 was designed to compete in the 1939 Berlin to Rome race, but the outbreak of the Second World War meant that the event never took place and the project was short-lived. It was based on the Volkswagen Beetle but powered by an air-cooled 1.5-litre engine, while the aerodynamic aluminium shell provided the blueprint for future Porsche models. 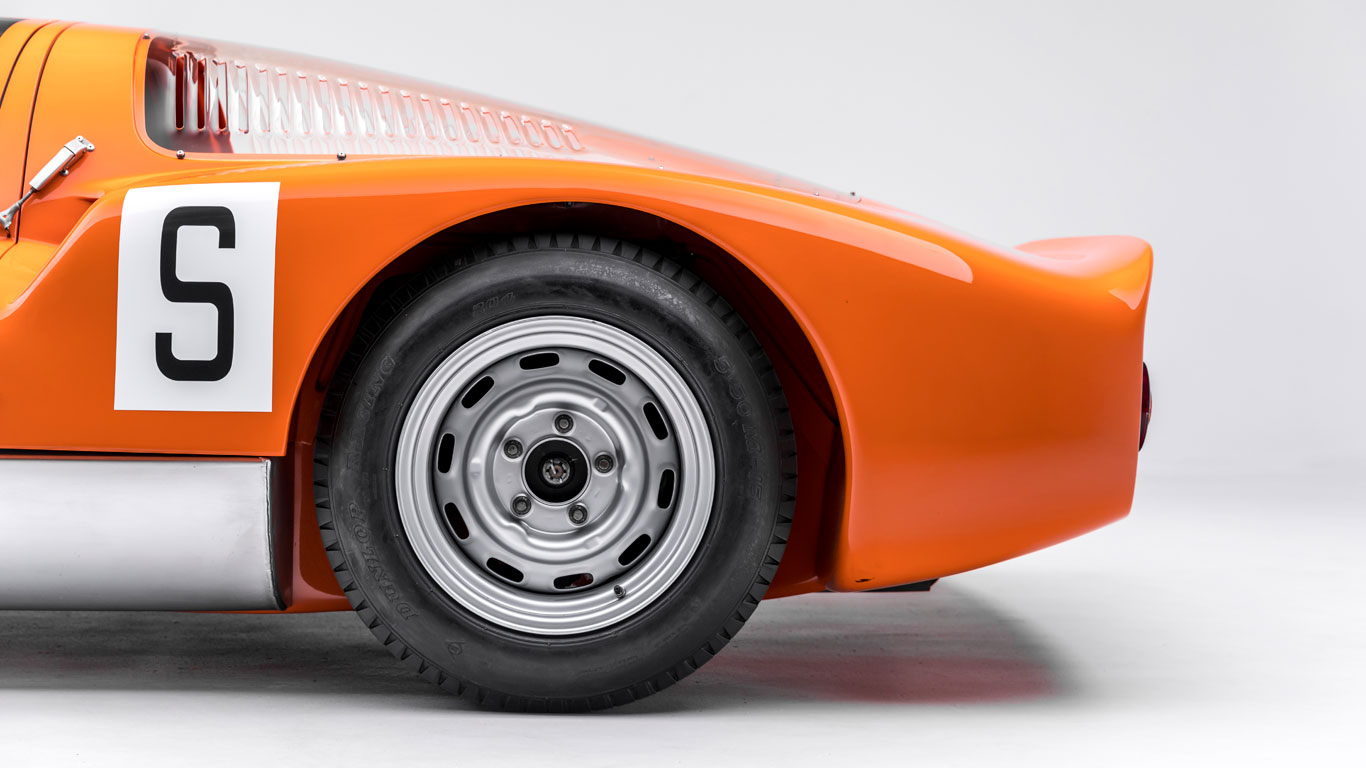 The 906 Carrera 6 was a development of the 904, featuring a lightweight fibreglass body, gull-wing doors and one-piece plexiglass engine cover. It made its debut at the Daytona 24-hour race in 1966, securing a sixth place finish and a class victory. At the 1966 Le Mans – the race famous for Ford’s 1-2-3 victory – the 906 took the following four places, a remarkable performance for a 2.0-litre flat-six sports car racing against the 7.0-litre V8 GT40s. 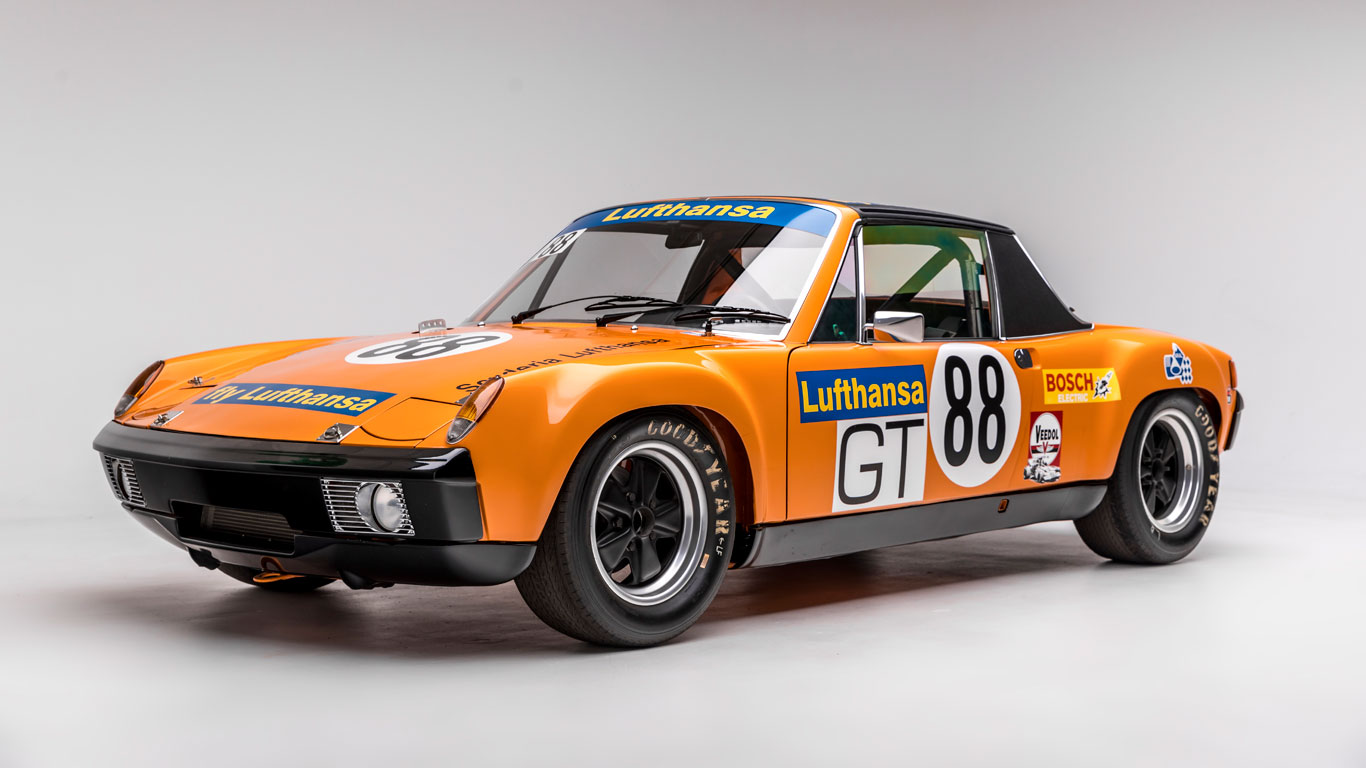 The 914-6 GT is a rare beast, listed in the 1971 Porsche catalogue as a Group 4 racer, with fewer than 50 leaving the factory. Power was sourced from a highly-tuned 2.0-litre engine developing around 210hp, which seemed woefully inadequate at the 1970 Le Mans. But this didn’t stop the 914-6 GT securing a fantastic sixth place finish, courtesy of Claude Ballot-Léna and Guy Chasseuil. 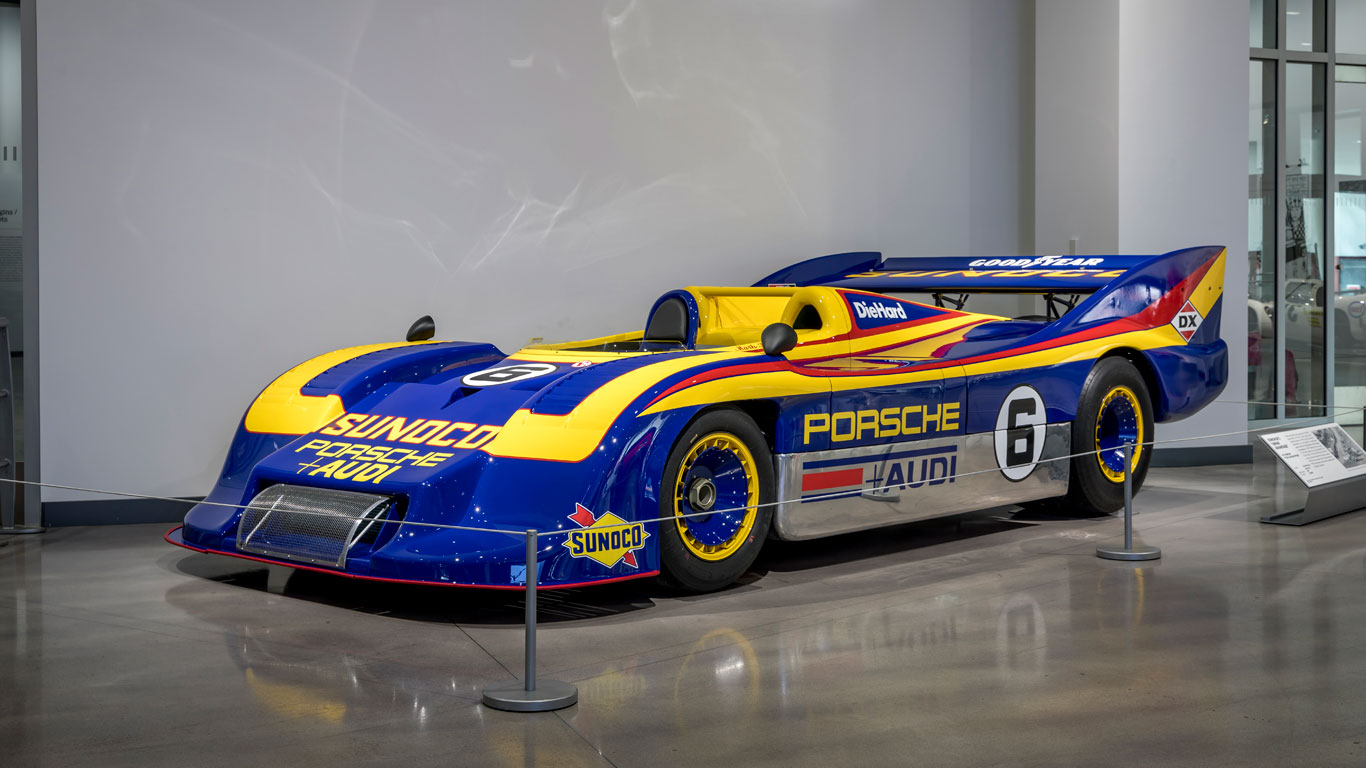 In 1973, Porsche launched the final version of the 917 Spyder: the 917/30. To kids growing up in the 70s, this was the daddy, with its 5.4-litre flat-12 engine developing a reported 1,100hp. One of the primary sponsors was the American sales organisation, ‘Porsche + Audi’, hence the decals. 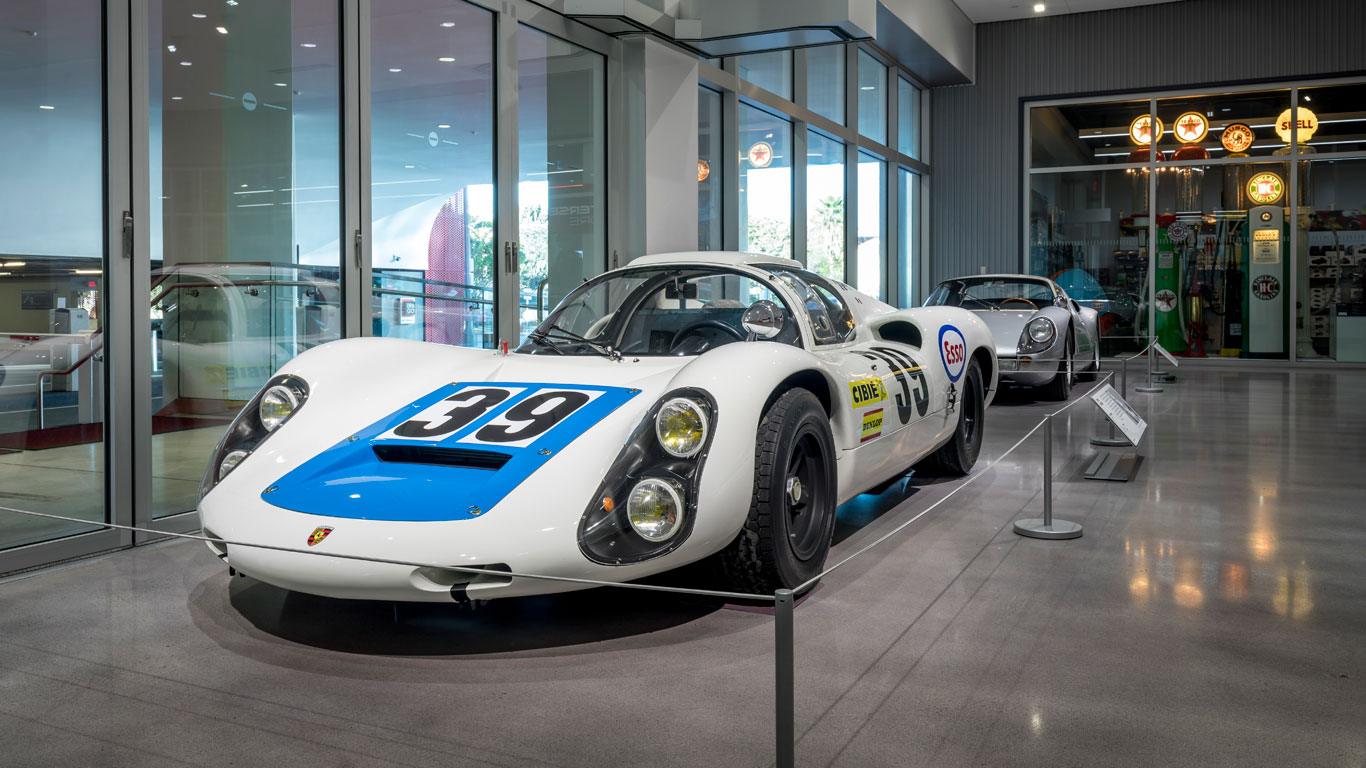 It looks similar to the 906, but the Porsche 910 is distinguishable thanks to its smaller 13-inch wheels, front-hinged doors, and a removable roof to allow for open or closed racing. Speaking about the exhibition, Klaus Zellmer, president and CEO of Porsche Cars North America, said: “When the Petersen Museum first suggested we work together on what has become “The Porsche Effect,” I immediately saw the mutual benefits to both. We are looking forward to sharing the story of Porsche through rare and seldom seen artifacts and display elements, in addition to some of the most iconic cars of all time.” 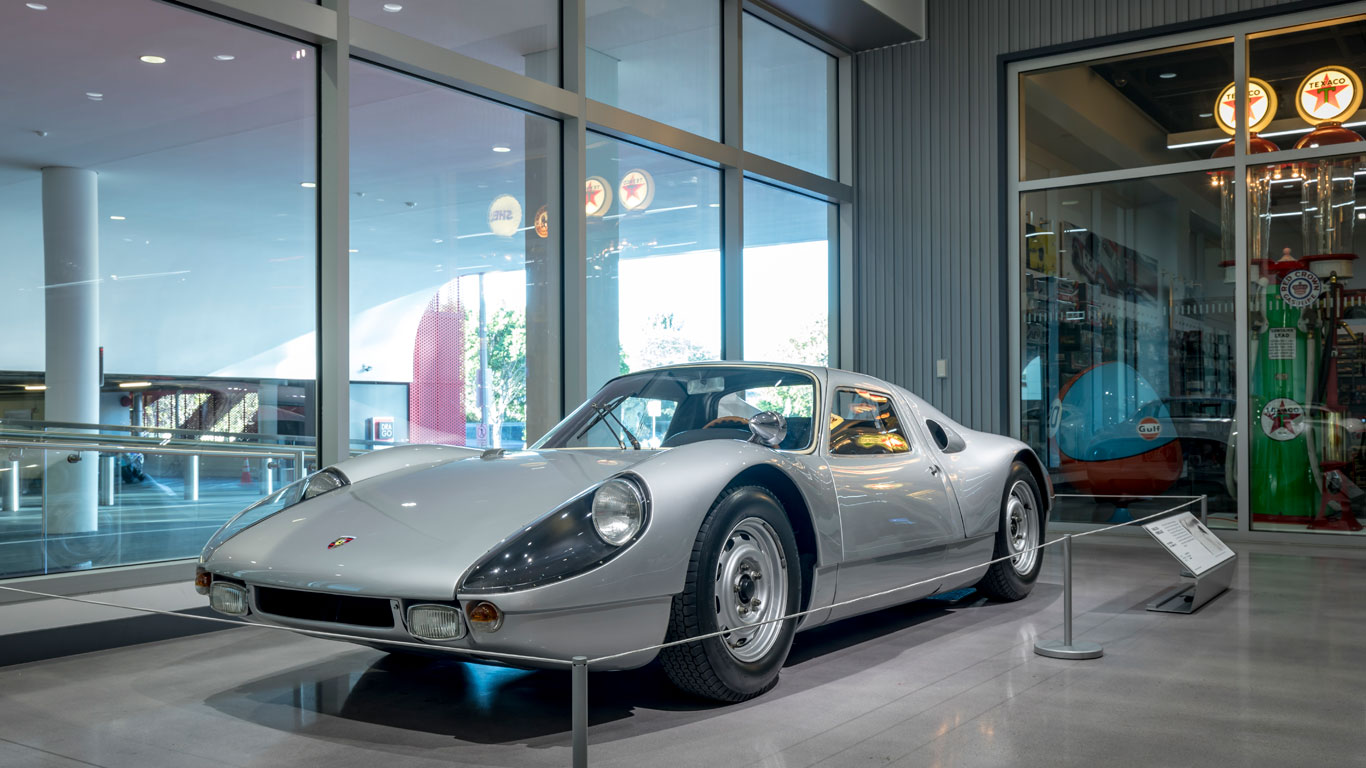 The Porsche 904 – or Carrera GTS – was designed to be a fairly simple and low-cost car that could be built and sold in sufficient numbers for homologation purposes. Although it was built to go racing, the first 904 to come to Britain was driven by Richard ‘Dickie’ Stoop to go shopping. Porsche built far more than the 100 required for homologation purposes, with most sold in the USA. 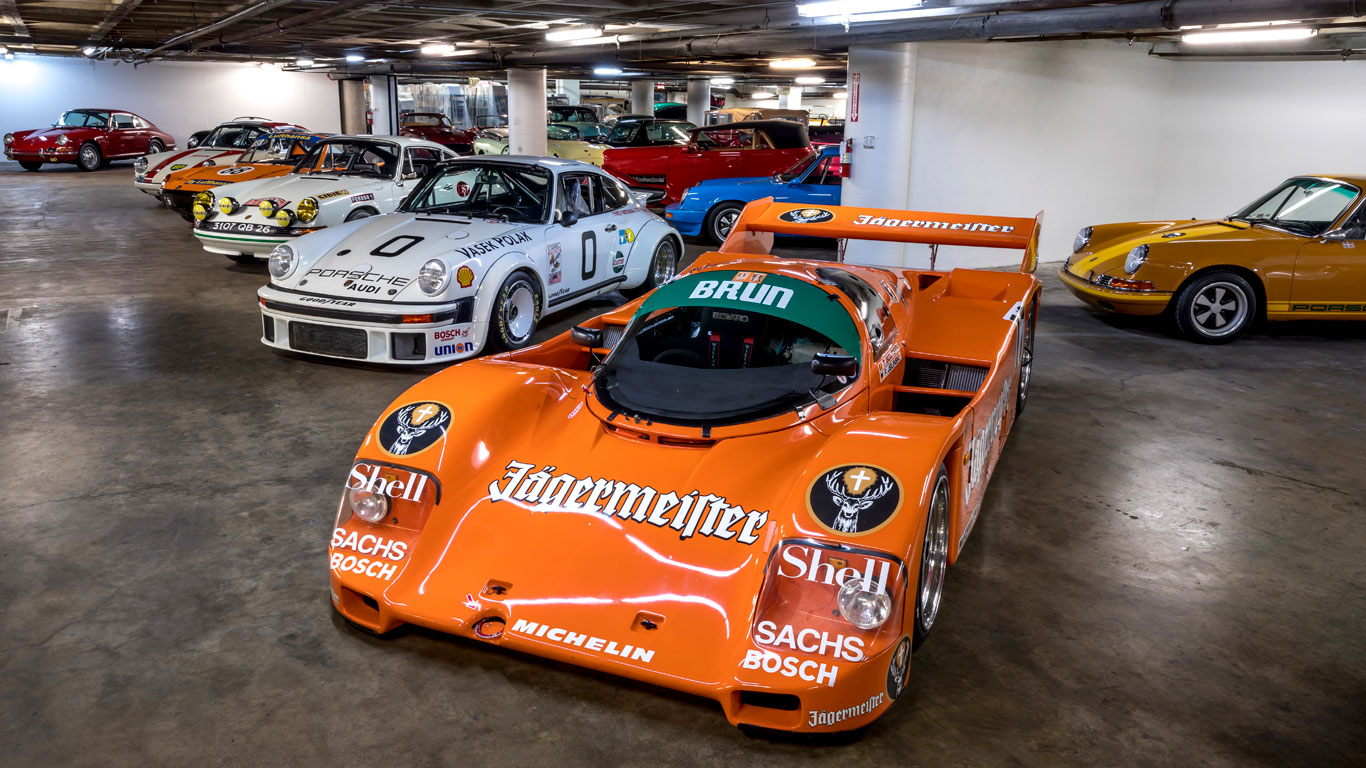 “At the Petersen, we always seek out compelling new ways to engage our guests and pique their interests,” said Executive Director Terry L. Karges. “Because Porsche is so embedded in the Southern California landscape, we were thrilled to partner with the legendary automaker to create an experience that is truly remarkable and dedicated to the many Porsche lovers in the Southland.” 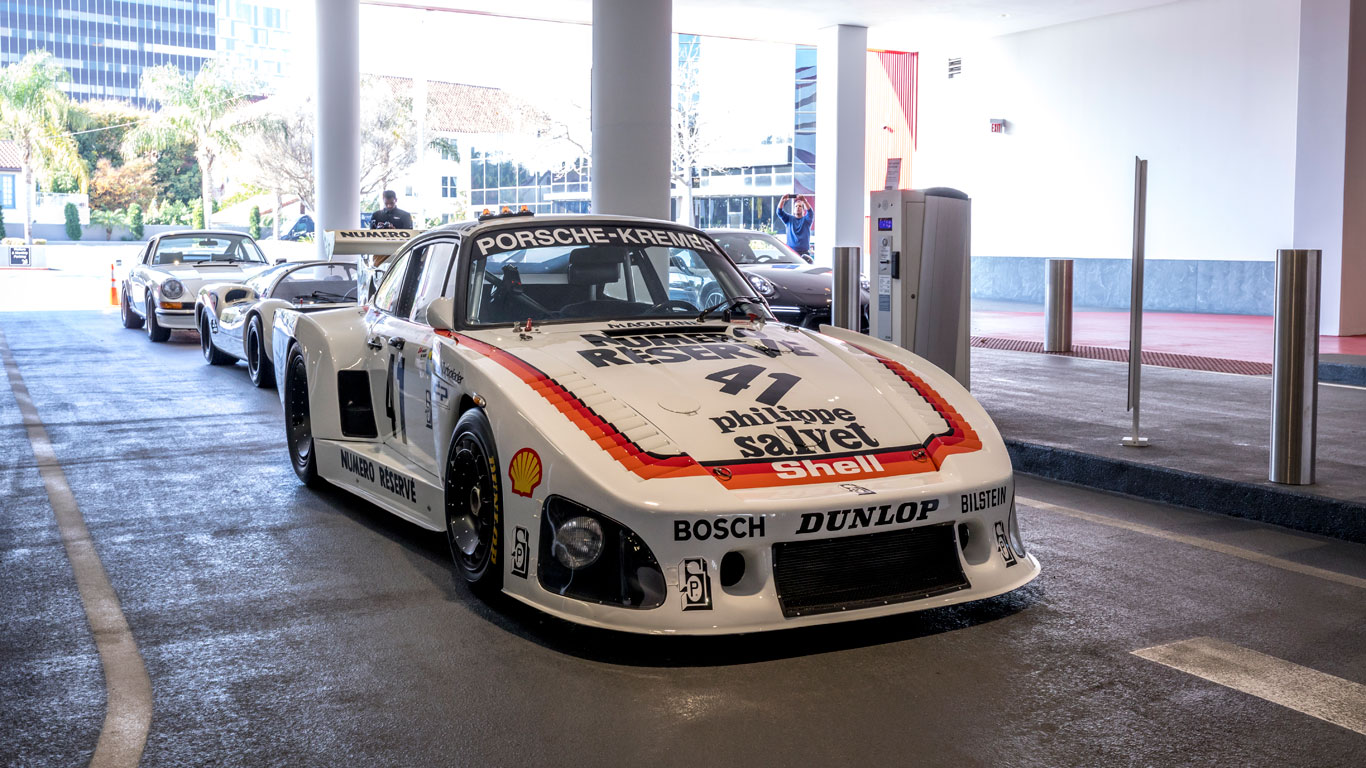 This was the actual Le Mans-winning Porsche Kremer Racing 935 K3 driven by Klaus Ludwig, Don Whittington and Bill Whittington in 1979. Actor Paul Newman finished second in a Dick Barbour Racing Porsche 935, while Kremer completed the top three in another 935. The K3 is owned by Petersen founding chairman, Bruce Meyer. 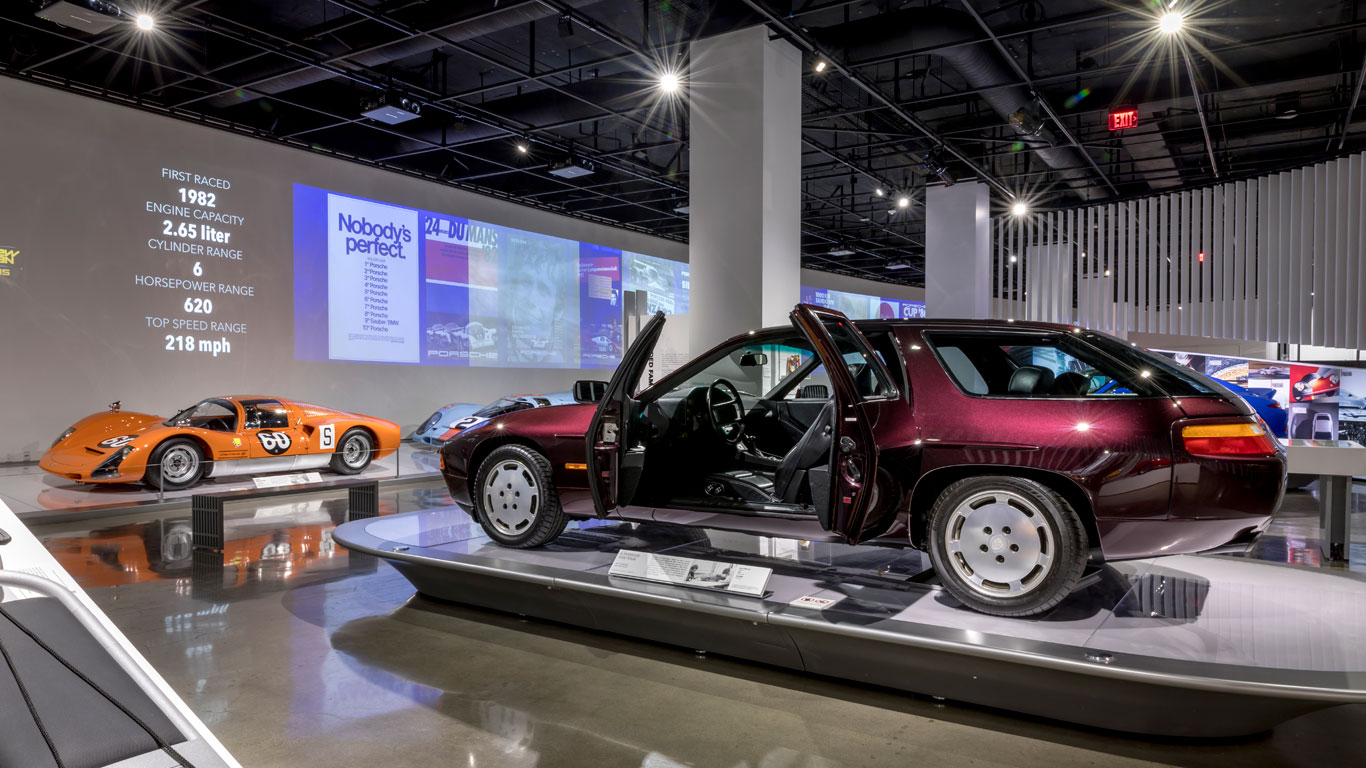 What you’re looking at is the godfather of the Porsche Panamera Sport Turismo: a four-seat, four-door Porsche 928. The H50 concept of 1987 is powered by a 330hp V8 engine, which is enough to propel this practical 928 to a top speed of 168mph. Sadly, after 5,000 miles of testing, the Porsche engineers decided that it lacked the required structural rigidity and it was pushed to the back of the factory. 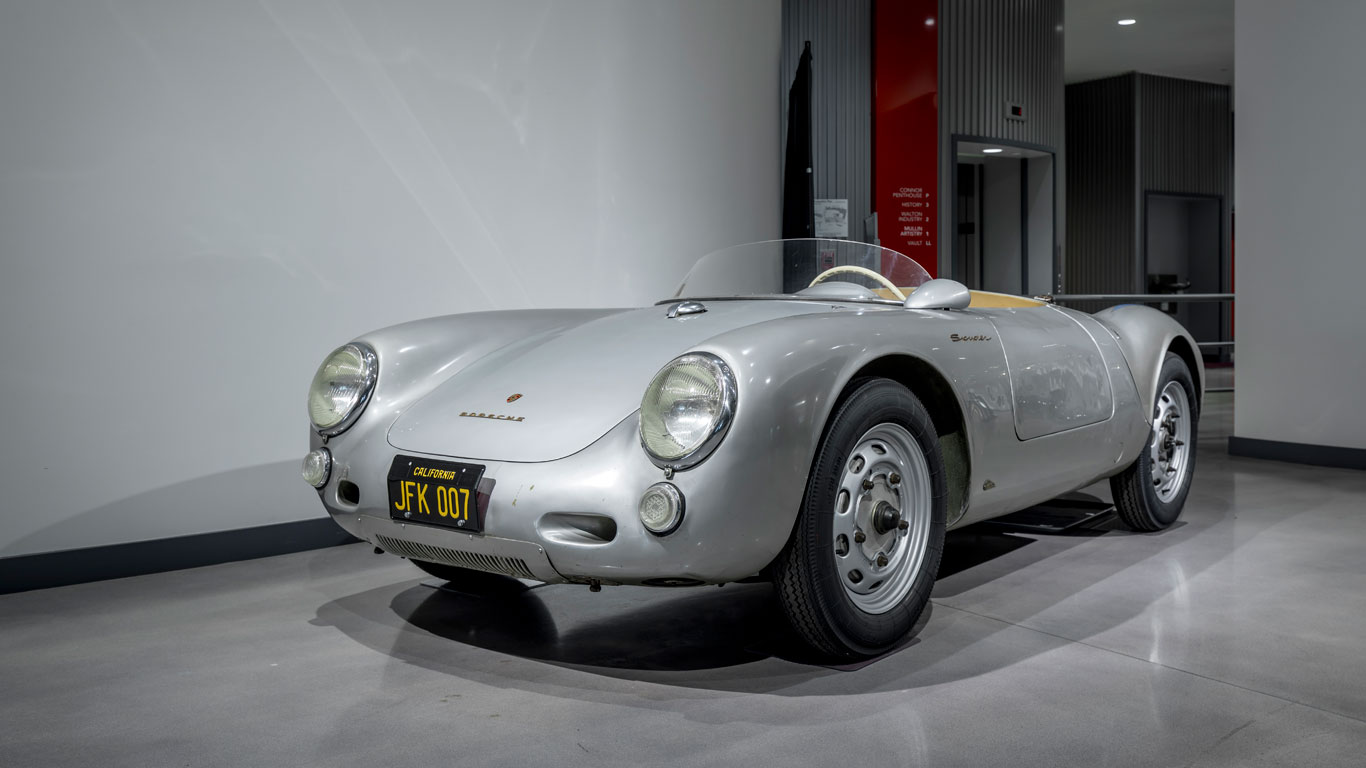 The majority of 550 Spyders were used for competition purposes, so to find such an original and unmodified example is a rare treat. In 2016, this 1956 example sold for a world record £4.6m at the Bonhams Goodwood Revival Auction. James Knight, the auctioneer on the day, said: “The car attracted much attention from bidders, with increments rising by hundreds of thousands until the gavel finally fell to achieve £4,593,500. The car is so original, that you could travel back in time 60 years and find it in much the same condition. It’s exactly how a 550 would have looked, smelt and felt like when James Dean famously purchased his example back in 1955.” Dean’s was perhaps the most famous of the 550s; he called his car the ‘Little B*stard’.” 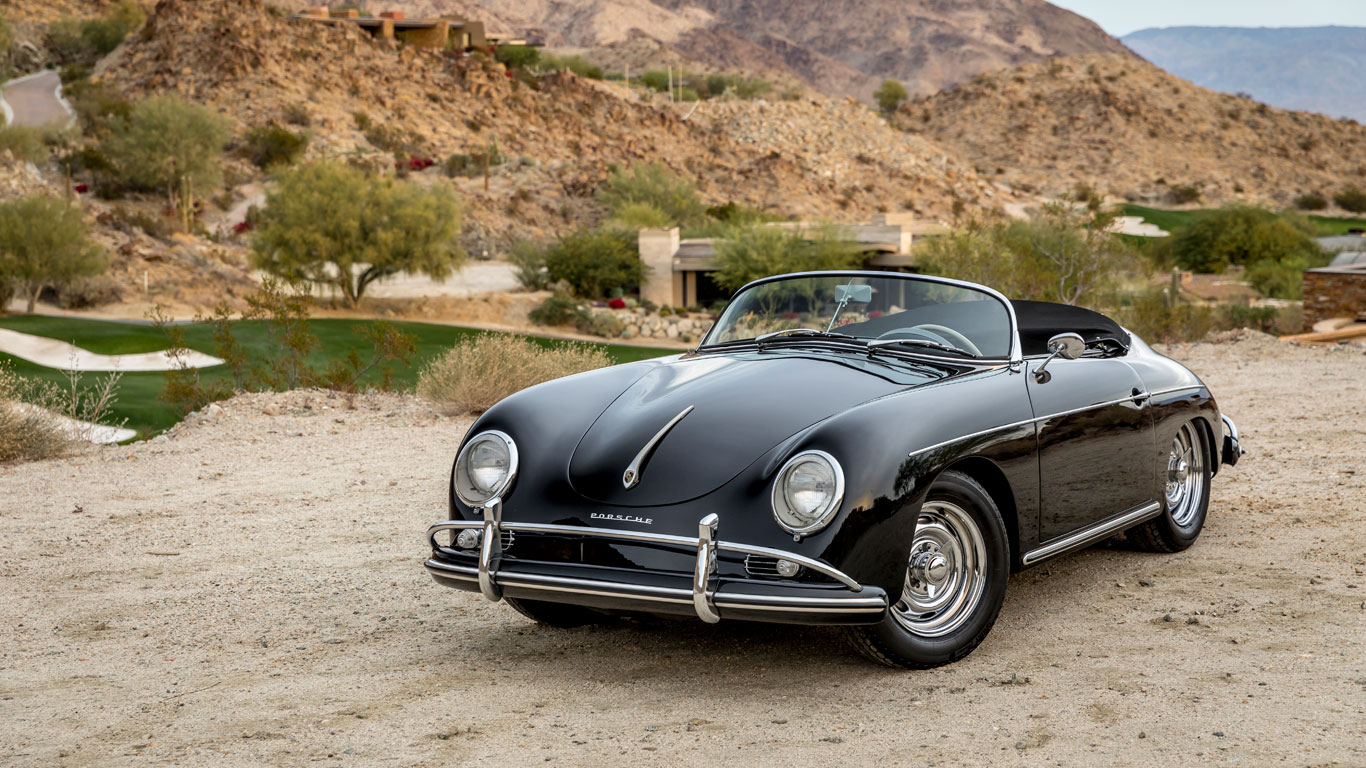 Speaking of Steve McQueen… this is his old Porsche 356 Speedster. In the 1960s, he sold the car to Bruce Meyer, but purchased the Porsche again just seven years later. Meyer regrets selling the Speedster, saying: “Steve called me and wanted to buy it back. We were friends, we’d done some motorcycle racing together. So I sold it back to him. His son Chad owns it today. “ 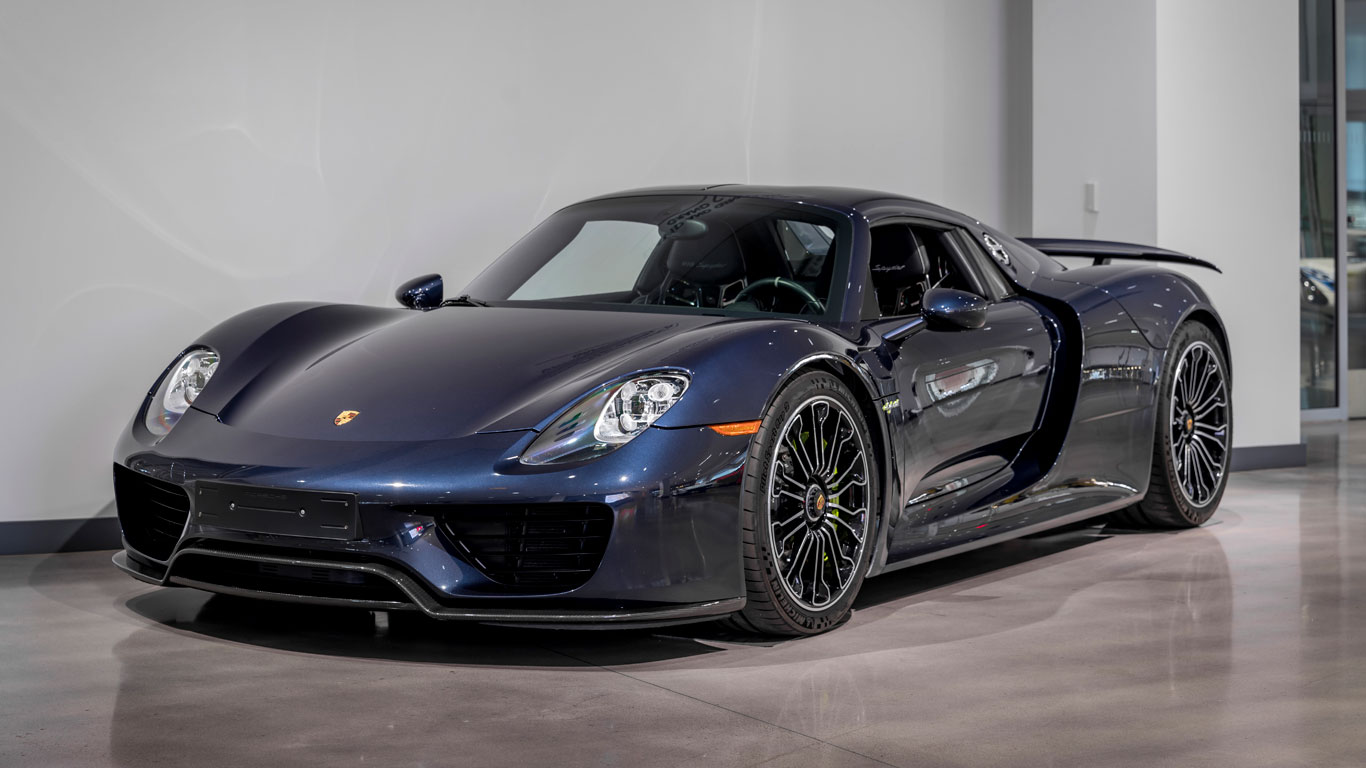 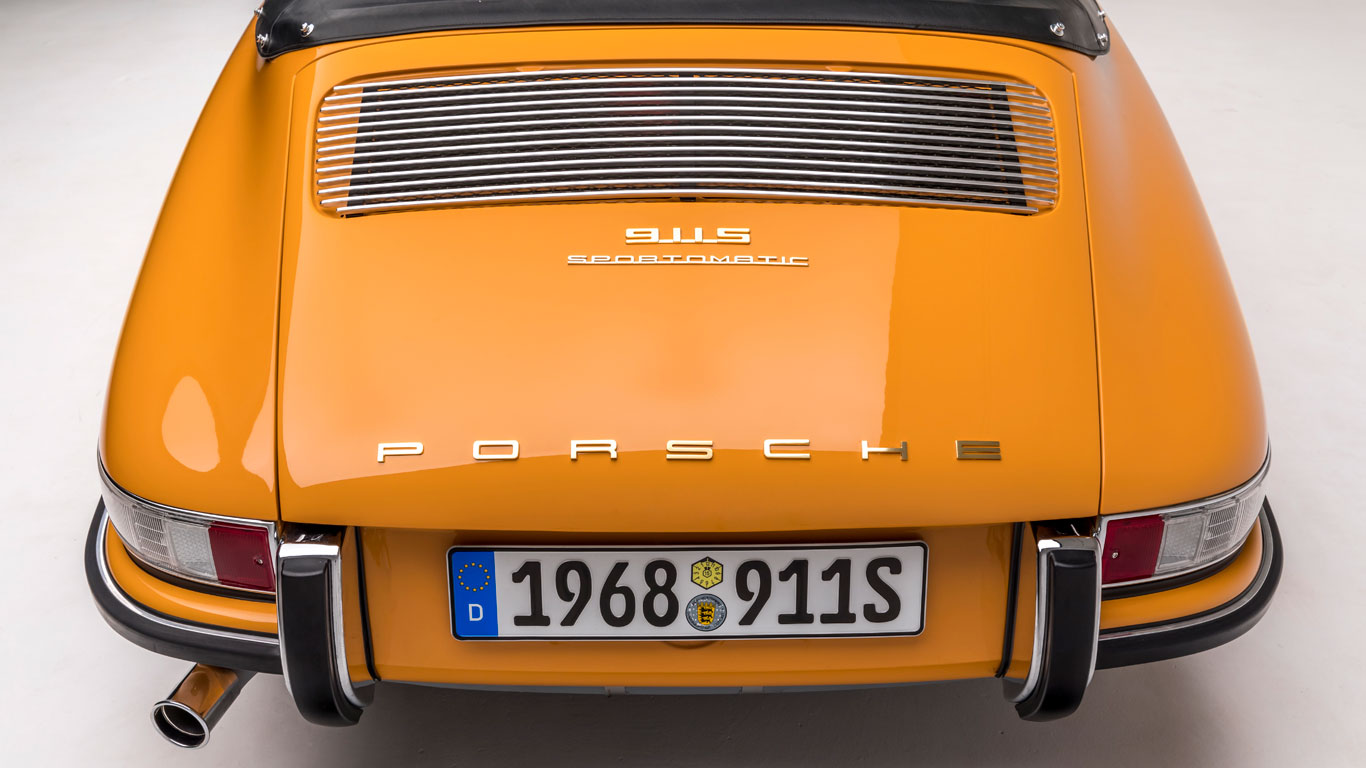 Another rarity: the Porsche 911 Targa Sportomatic features a vacuum system and torque converter, which means that the driver is able to select their own gears without using a clutch pedal. Owners Alan and Lisa Grant are incredibly lucky to own this classic boulevard cruiser. 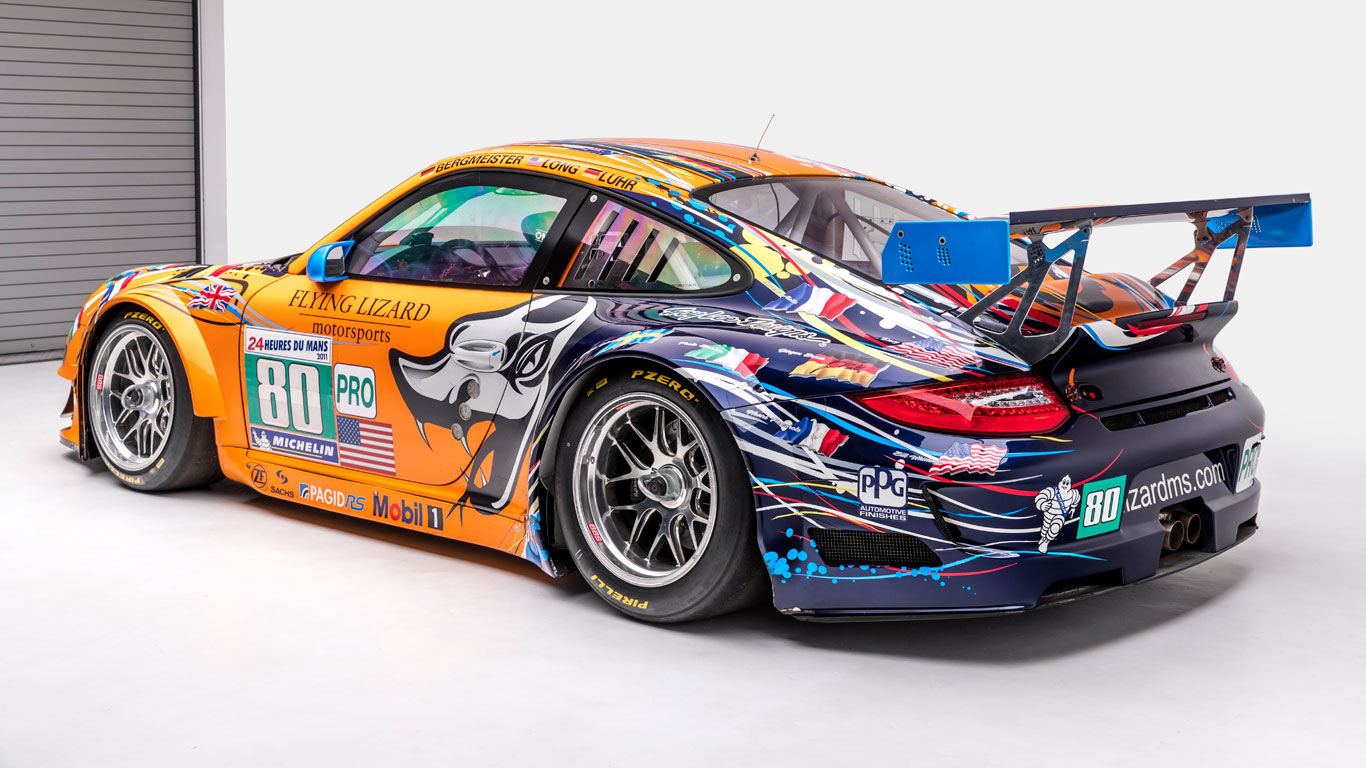 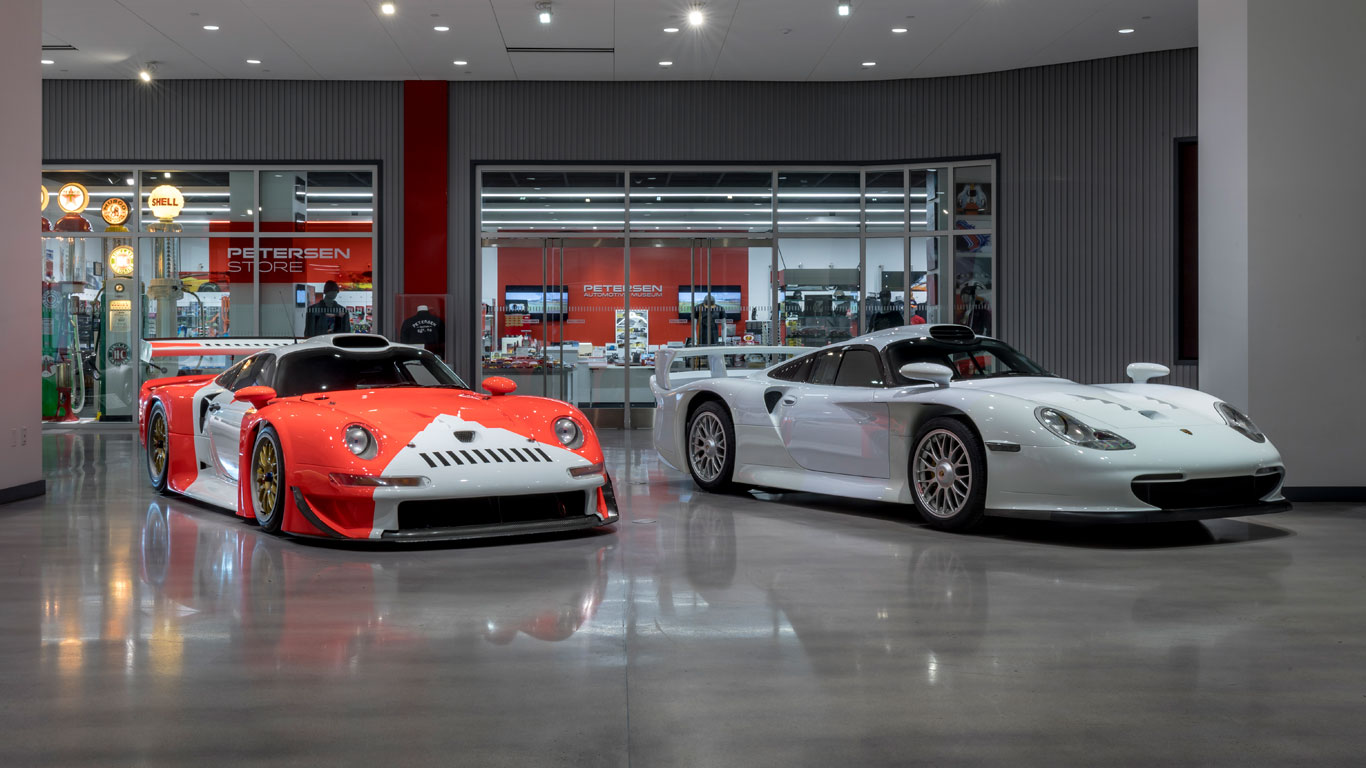 Another treat: a road-legal Porsche 911 GT1 alongside its race-going sibling. The race version made its competition debut at Le Mans in 1996, where it finished second and third overall, winning the GT1 class in the process. A total of 25 ‘Strassenversion’ GT1s were built for homologation purposes, each one powered by a 3.2-litre flat-six, twin-turbocharged engine. 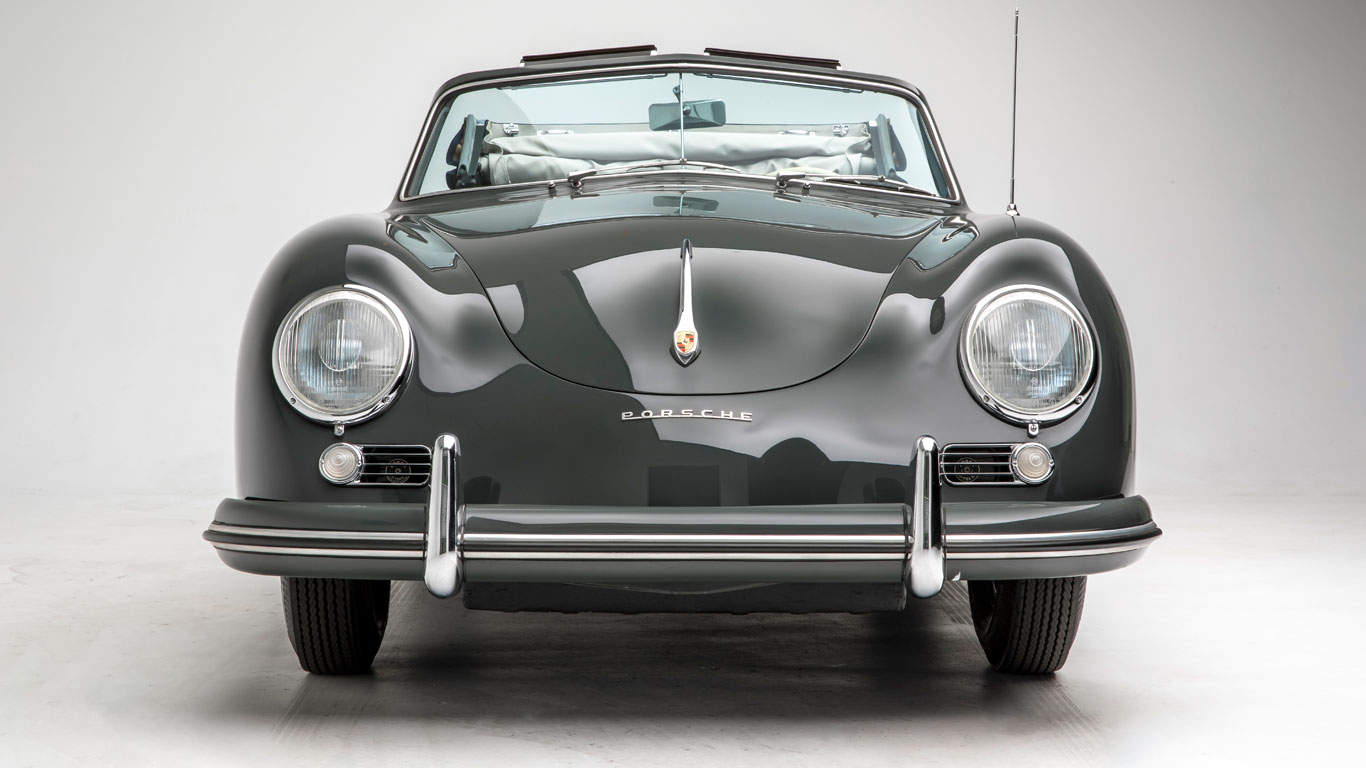 The 356 Continental was the brainchild of Max Hoffman, the North American importer of Porsche cars. The idea was to shift stock of the ageing 356, with Porsche using the tried and tested method of adding many extras to the standard car. But Ford wasn’t happy with the choice of name, and when the courts ruled in favour of the Blue Oval, the Continental name was dropped. 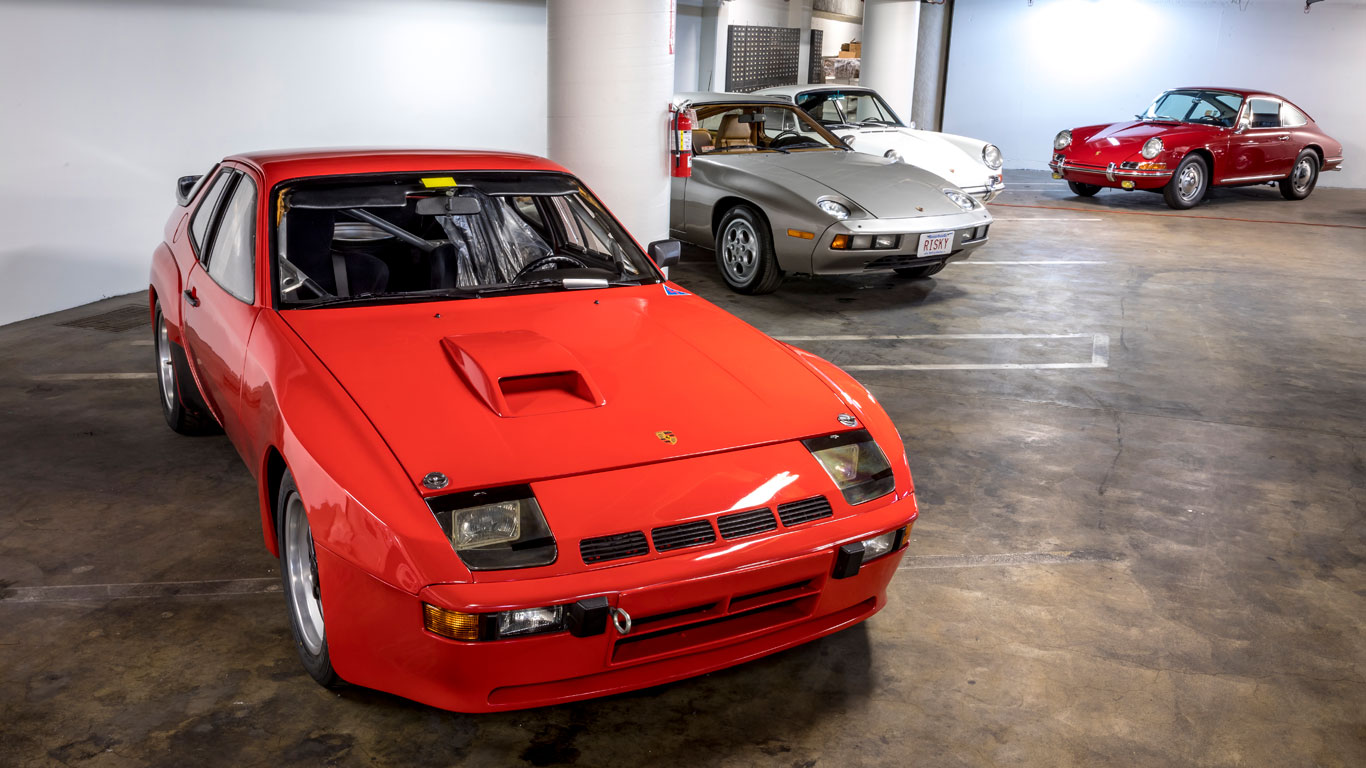 The Porsche 924 Carrera GTS is distinguishable from the Carrera GT thanks to the perspex headlight covers and an intercooler in front of the engine, rather than on top of it. A mere 59 were built, making it one of the rarest and most coveted of Porsche models. It was 59kg lighter than the GT, although the Clubsport and GTR models were lighter still. 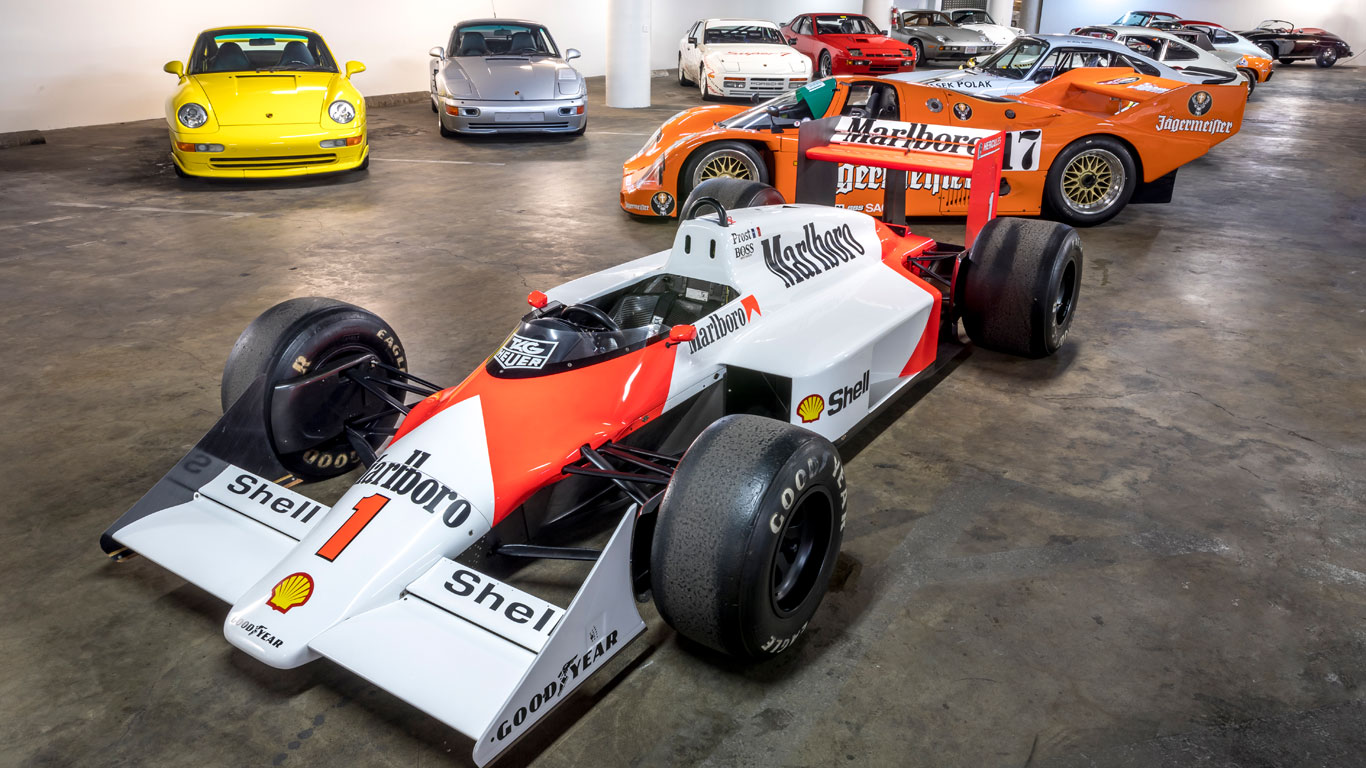 This is the 1987 McLaren TAG-Porsche, as raced by Alain Prost. The Frenchman finished fourth in the 1987 drivers’ championship, winning a total of three races. In total, the TAG-Porsche engine propelled McLaren to 25 Grand Prix victories. 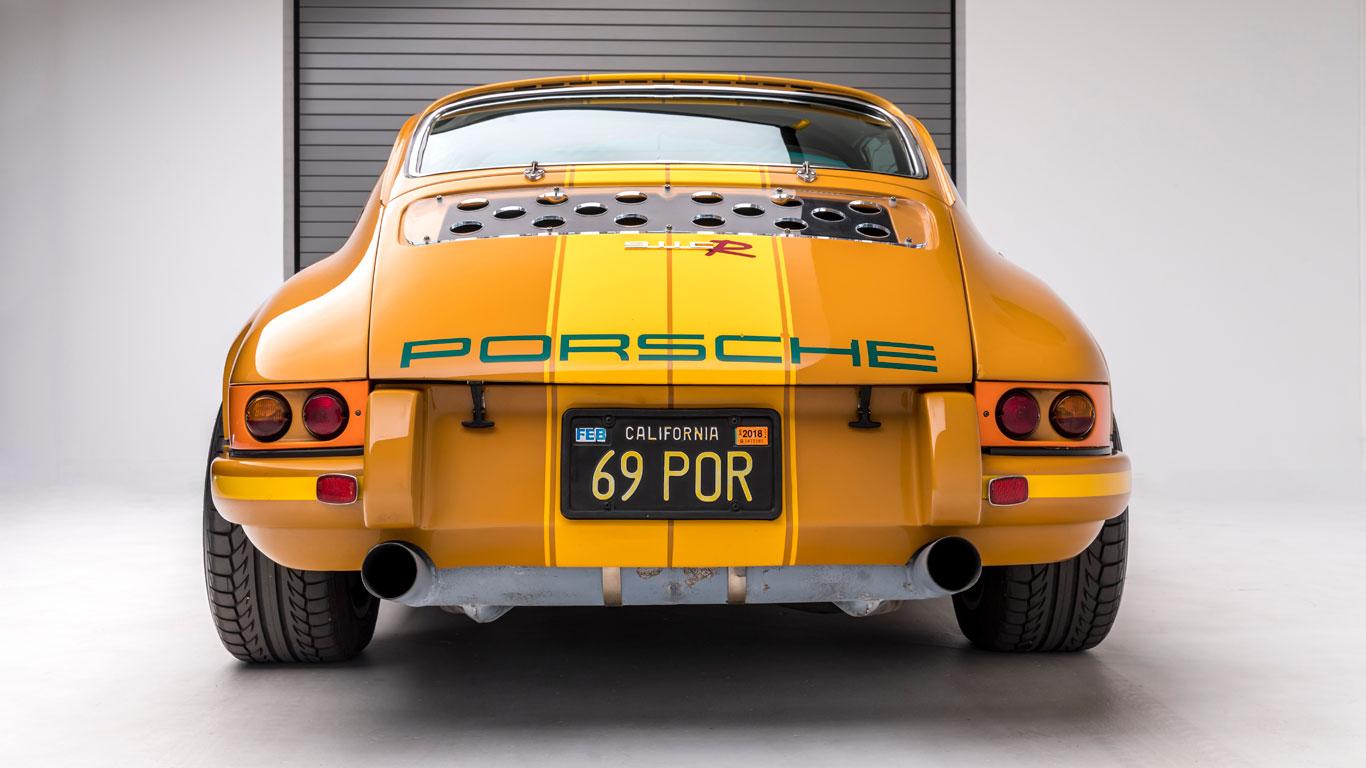 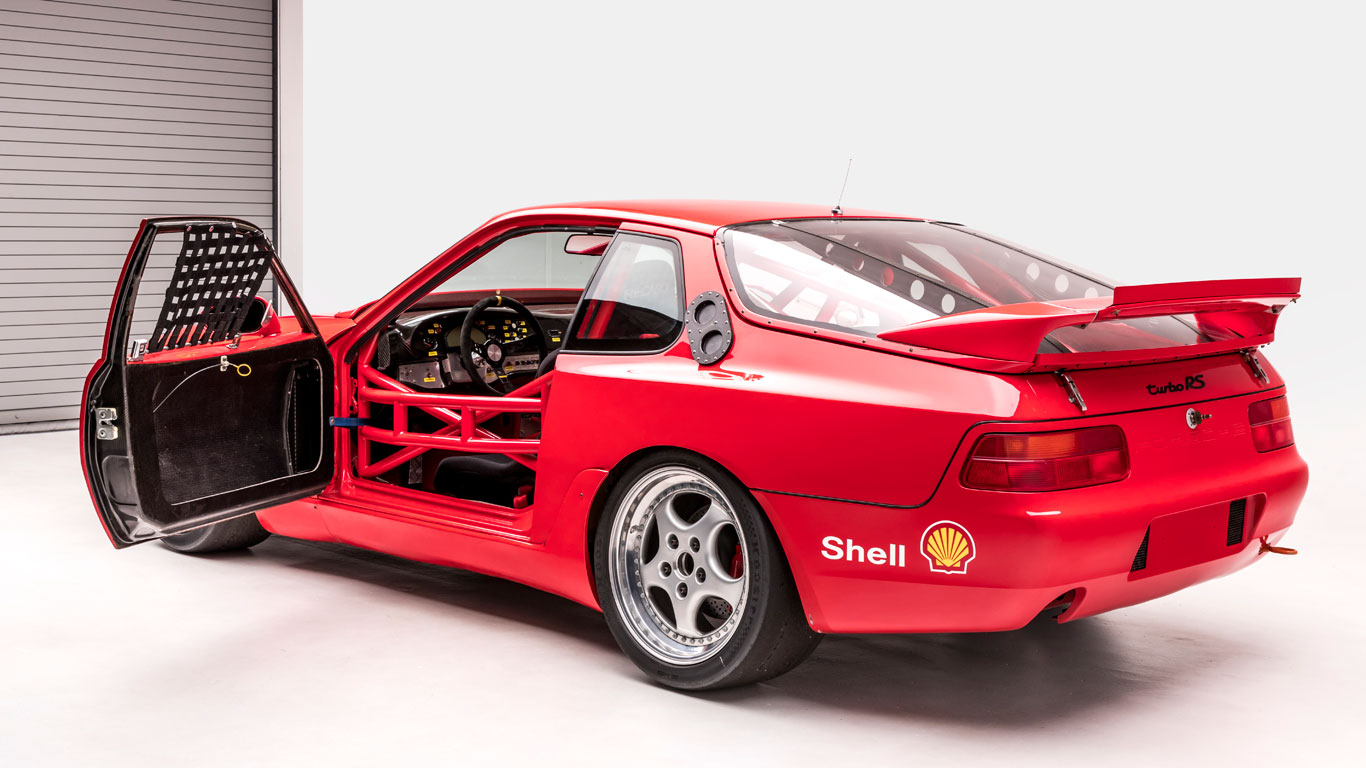 Just four 968 Turbo RS models were built, making it one of the rarest Porsche cars ever produced. With 337hp and 369lb ft of torque on tap, the Turbo RS wasn’t lacking in punch, offering an ability to hit a 911-troubling top speed of 175mph. 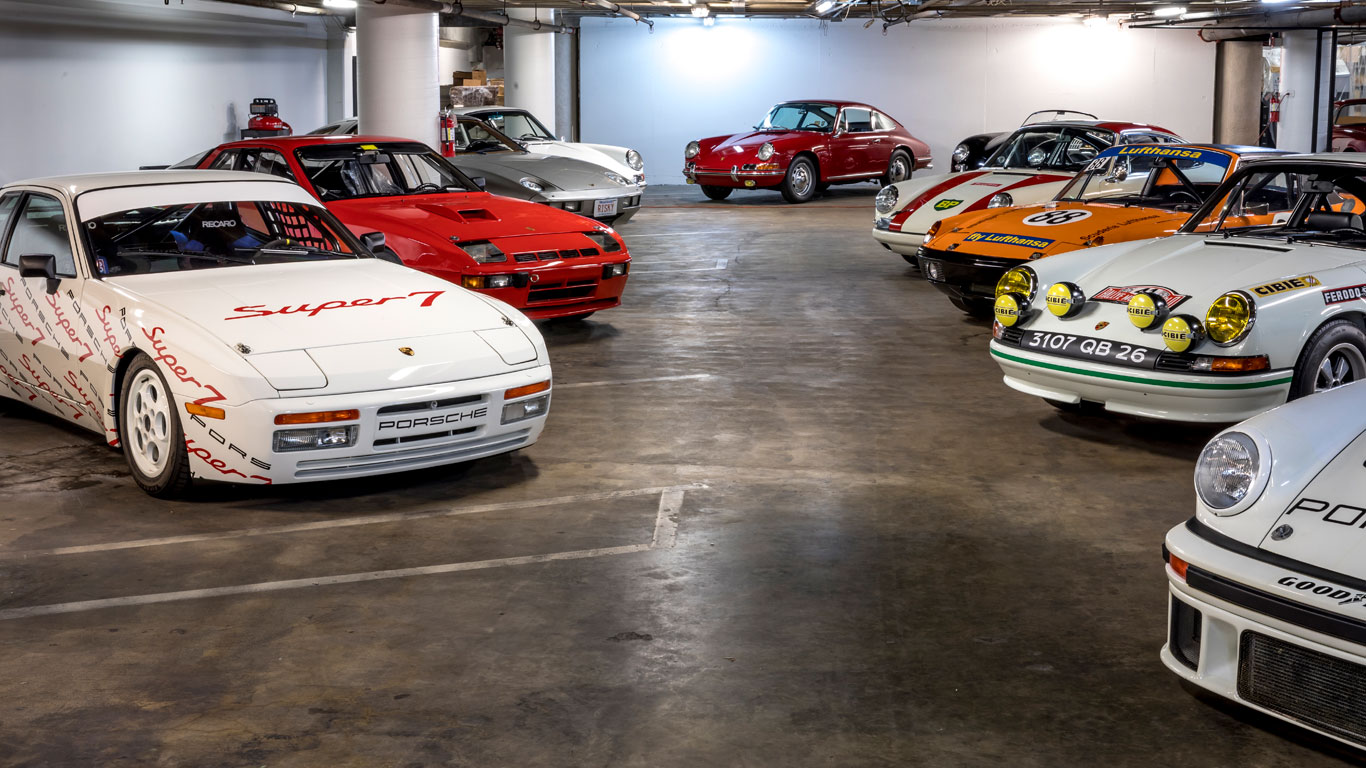 You’ll find the vault deep beneath the Petersen Automotive Museum, which is available for tours as a bolt-on to the general admission ticket. On the basis of this photo alone, it’s worth booking ahead. 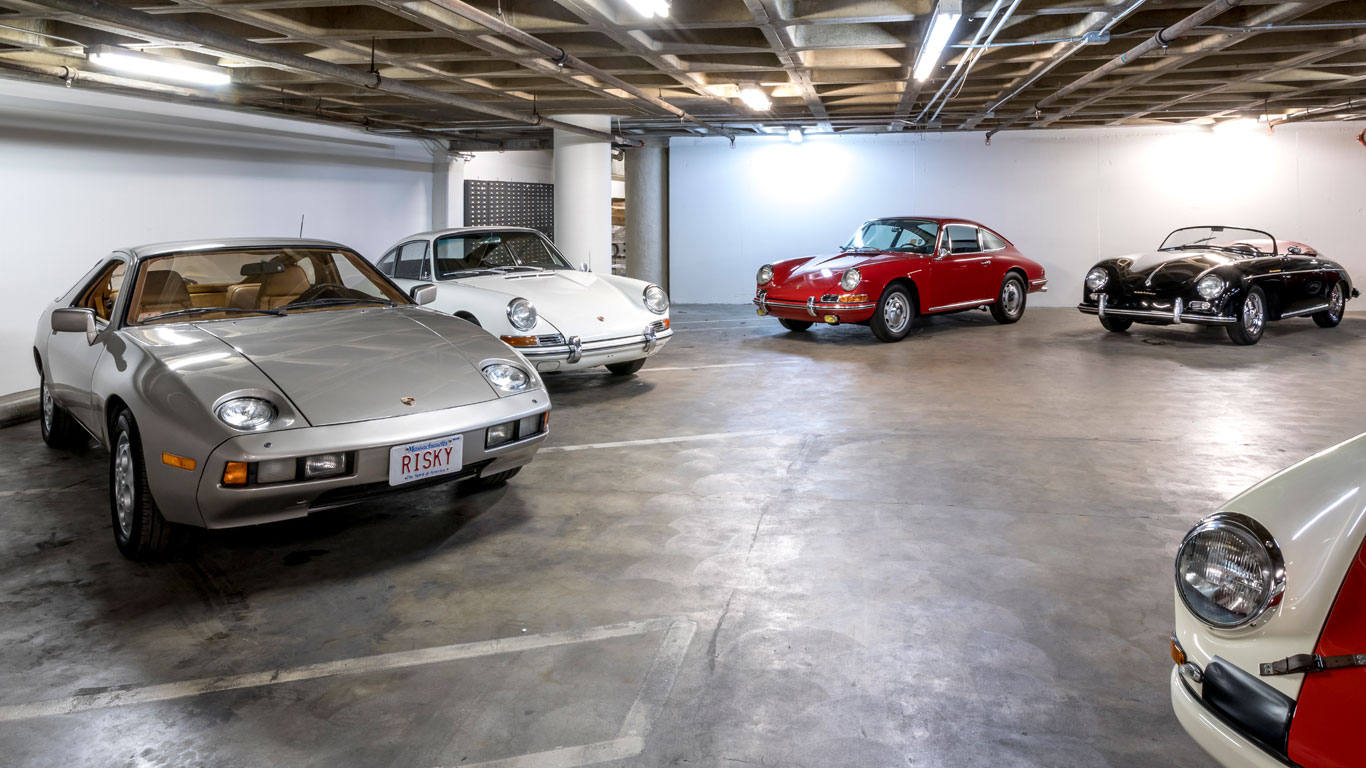 The Porsche Effect exhibition is in residence until 27 January 2019. You can find the Petersen Automotive Museum at 6060 Wilshire Boulevard in Los Angeles, California. View the slideshow below for more Porsche photos.