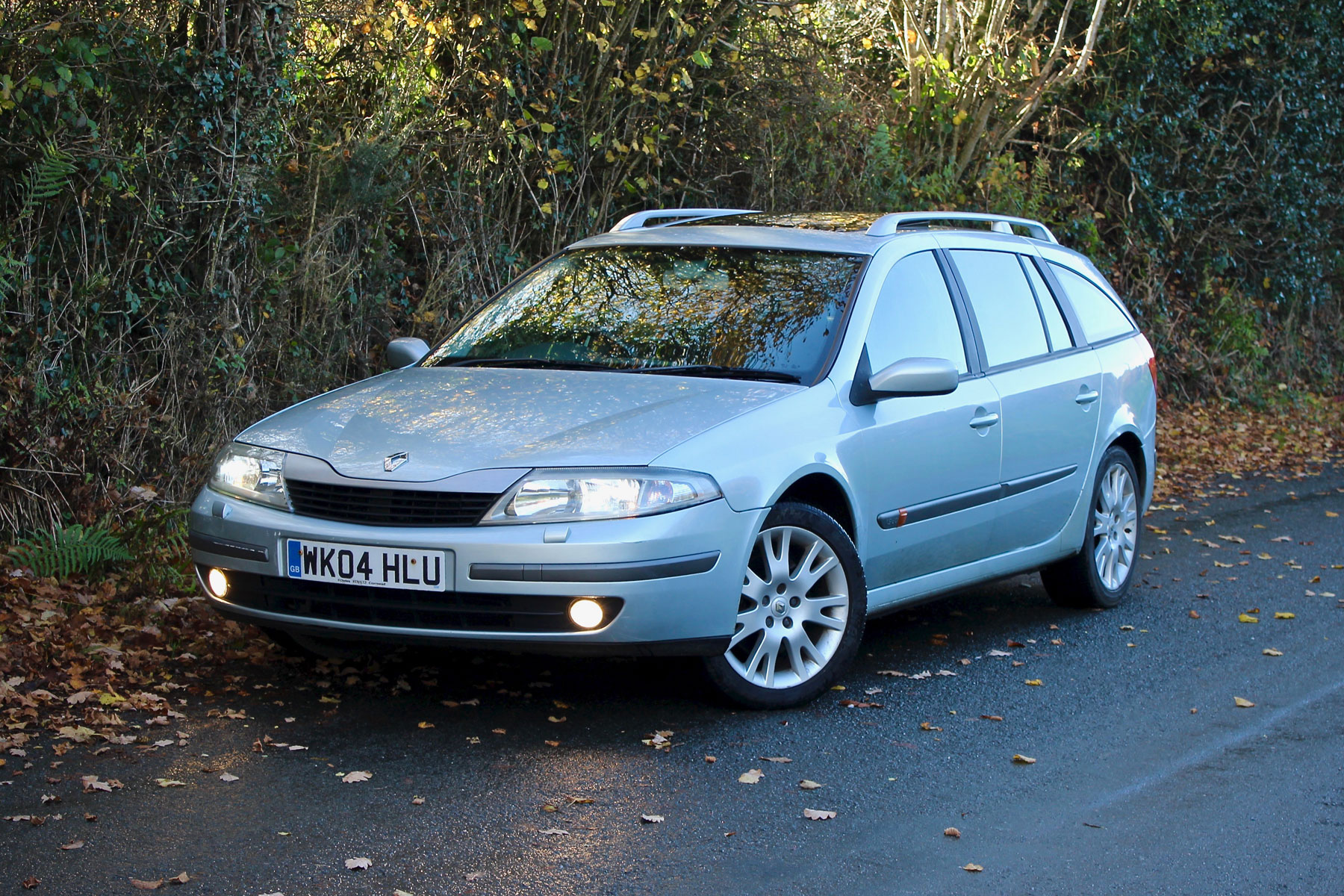 With risk comes reward. That’s the theory, anyway. Betting your life savings on black will either make you rich or sitting on the brink of financial ruin. Still, nothing ventured, nothing gained.

I’m not going to pretend that blowing £100 on a Renault Laguna is quite the same as risking your rainy-day cash on the spin of a roulette wheel, but the effects could be just as severe.

The Laguna has become an axiom of unreliability. It is the antithesis of the Honda Jazz. The opposite of common sense. Only a fool would buy one. Which probably explains why I’m the custodian of a 2004 Renault Laguna II Sport Tourer.

Yep, the Laguna II is the problem child. It all started so well for Renault’s family exec, with the first-generation Laguna securing a foothold in a segment dominated by Ford and Vauxhall, helped in no small part by the exploits of the Williams-Renault BTCC cars, most notably in 1997.

Win on Sunday, sell more toner cartridges on Monday, or something along those lines.

The toast of Leigh Delamere 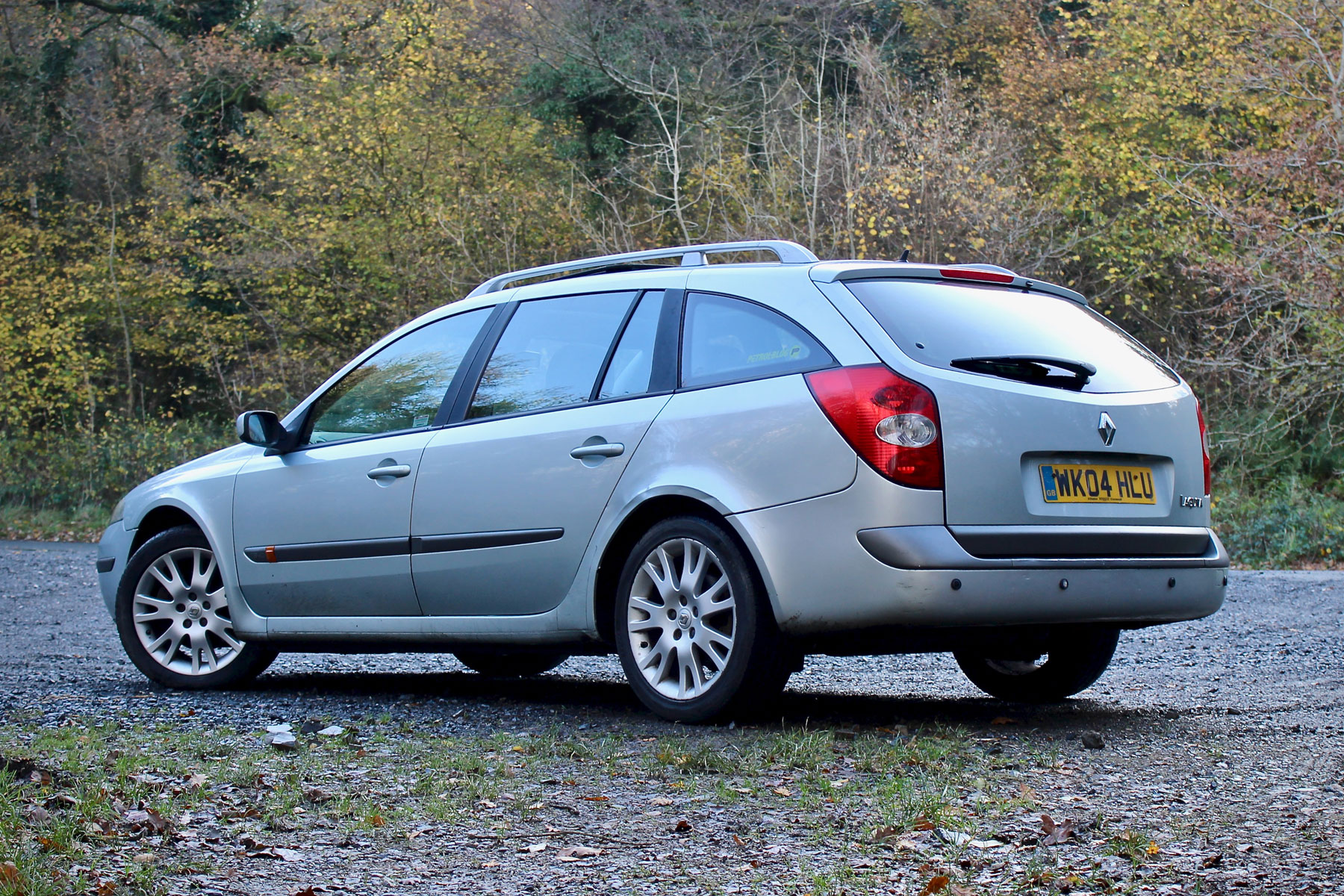 The Laguna II, unveiled at the 2000 Paris Motor Show, looked set to carry Renault’s repmobile into the new millennium, riding on a wave of avant-garde styling. Regie invested heavily in the car, developing the hatchback and estate models individually from the outset to create two different vehicles.

Things started well. The design, influenced by the Initiale concept car of 1995, was smart, if not exactly groundbreaking, and the Laguna packed enough tech to keep a sales rep chatting over his Early Starter for hours on end.

Entering and starting a car with the aid of a keycard felt otherworldly back then, while sat-nav, parking sensors and xenon headlights were the preserve of the cars lined up in the senior management parking bays, not those jostling for position at South Mimms or Leigh Delamere.

But the Laguna’s pièce de résistance, its main party trick, was its five-star Euro NCAP safety rating. Crash tested in 2001, the Laguna became the first car to achieve the maximum score: a milestone in the history of European safety ratings.

However, 17 years is a long time in the car industry, and it hasn’t been kind to the Laguna II. Spend a few minutes online, and you’ll be greeted with tales of terror, shocking stories and ‘approach with caution’ notices.

The Honest John ‘Good & Bad’ section provides the perfect demonstration of the Laguna’s many imperfections, with the list of faults far outweighing the positives, of which there are just two. Seriously, nobody in their right mind would buy a leggy Laguna II after perusing this CV.

Or would they? The problem is, I dream about different cars to most folk. While many car enthusiasts head to the numerous car festivals or concours events to get their motoring kicks, I tend to find my thrills in less salubrious surroundings.

Under the arches, at the back of industrial estates or searching the ‘under £500’ category in the classifieds are the kind of places you’ll find me. It’s a dark, gritty and occasionally oily existence, but it makes me happy. 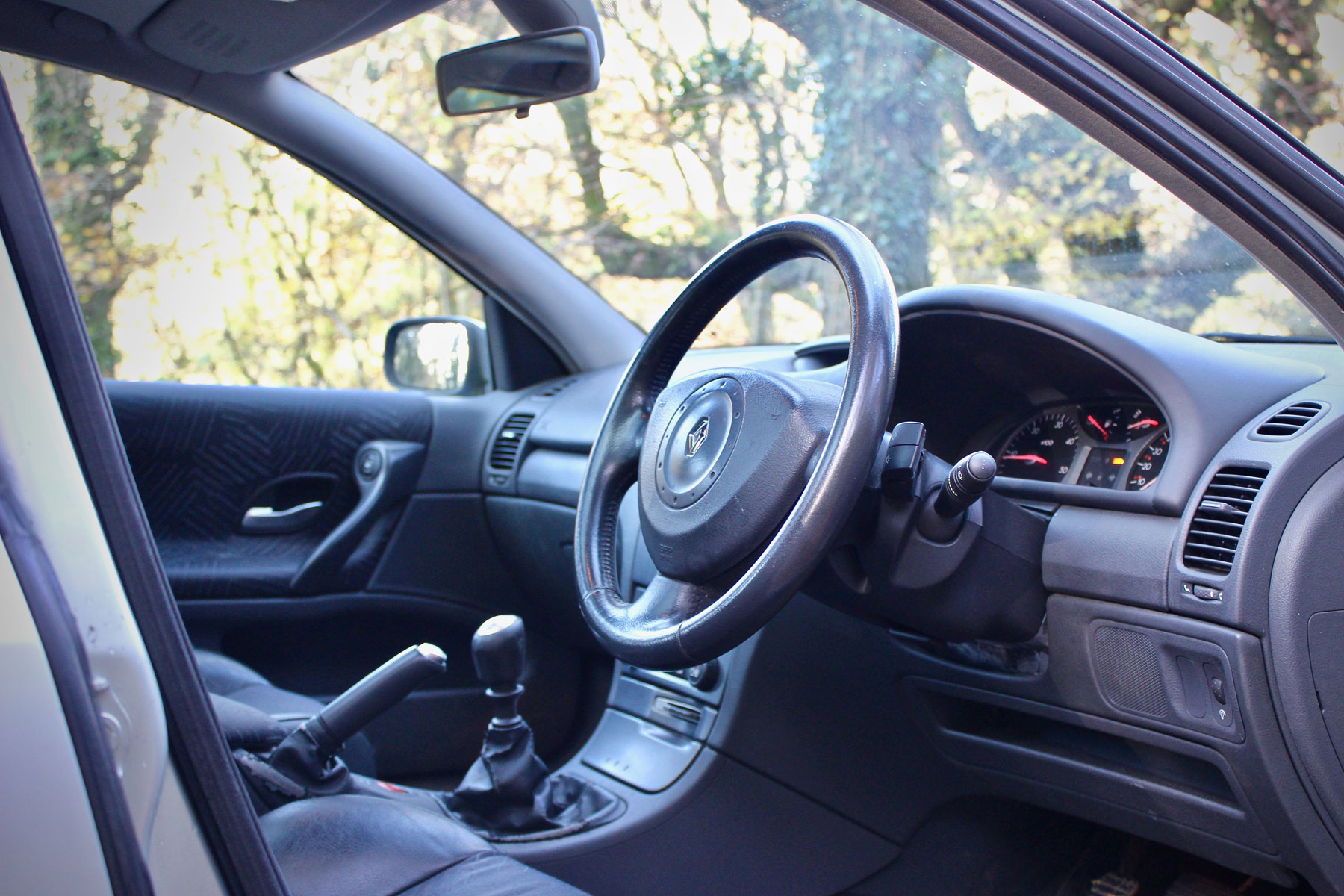 Admittedly, £100 isn’t a tremendous amount of cash to risk on a car – some kids spend more than that playing an hour of Fortnite – but, you need to factor in the cost of insurance (£140), tax (£195) and petrol, servicing and maintenance.

Standard costs regardless of what car you’re buying, and at least there’s no depreciation to worry about. Which is great, because you have plenty of other things to lose sleep over when you own a Laguna II.

It’s not perfect, but what would you expect from a car costing a ton? Cosmetically, you could describe it as tatty, bordering on shabby. But, isn’t shabby chic all the rage, or have I got the wrong end of the stick?

There’s a nasty scrape on one of the wheelarches, a bodged repair on a sill and enough scratches to make me think it has had a tussle with Edward Scissorhands. But, it’s all original, it has never been in an accident, and it even wears its original dealer number plates.

It helps that it has had just two previous owners in its 14-year life. The original custodian kept it for the first three years, racking up 60,000 miles in the process, with the second owner holding on to it ever since.

There are enough invoices, receipts and old MOTs to fill two box files, providing the kind of service history used car buyers dream about. Admittedly, in the case of the Laguna II, a history of maintenance is as much a paper trail of terror as it is evidence of loving care.

But, everything has been fixed when required, advisory notes have been acted upon and, mechanically at least, the £100 Laguna has wanted for nothing. Let’s also remember that it has survived various scrappage schemes and opportunities for it to be traded in for something less troublesome.

Not that getting rid of a Laguna II is a straightforward process. According to Honest John, some dealers refused to take these cars in part-exchange, preferring to chance their arm with something less problematic, like an unexploded bomb, Katie Price’s financial affairs or world peace.

It means that the Laguna II tends to be cheaper than the original Laguna – it’s not hard to find a selection of cars available for £300 to £500. You can thank our disposable society and the rise of the PCP deal for the plethora of bargain-basement family cars, but there are far safer options at this end of the market.

The Honda Accord, Toyota Avensis, Ford Mondeo, taking the bus or staying indoors – all preferable to a cheap Laguna II.

A moustache and monkey’s leotard 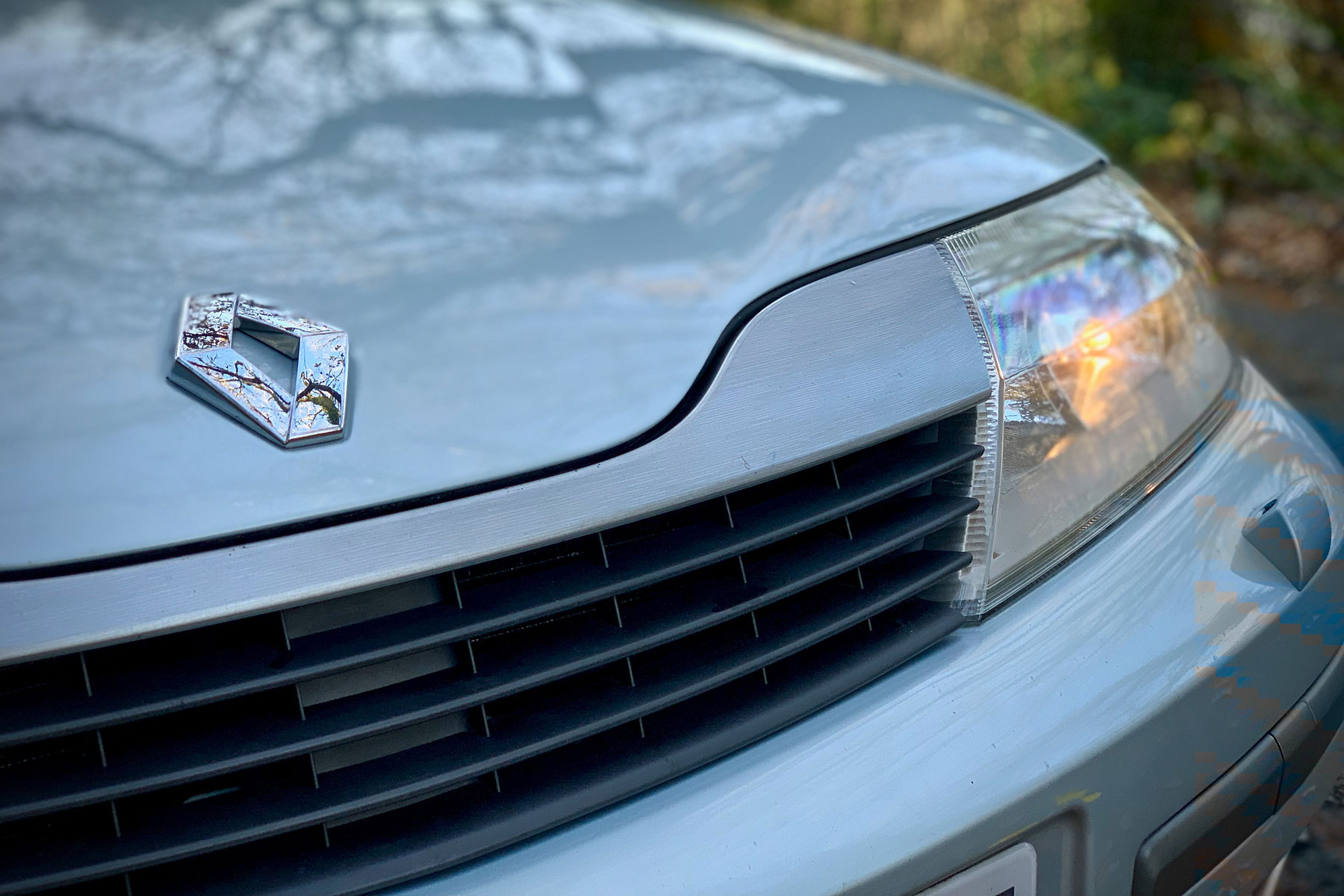 OK, enough of the doom and gloom, what’s this car really like? Well, subjectively, I think it has aged as well as any other estate car of the previous decade. It doesn’t have the Teutonic class of a German wagon, but in profile and from the front, it remains elegant and understated. The brushed aluminium ‘tache’ above the grille is a nice touch, as if the designers took inspiration from a Magnet kitchen catalogue.

The 1.9-litre dCi engine is relatively economical – I’ve averaged 42.0mpg since buying it, which isn’t bad for a diesel estate in the autumn of its existence. With a fleet of petrol-engined coupes, hot hatches and convertibles, it’s rather refreshing to see a 700-mile range when you fill the tank.

Similarly refreshing is the fact that I don’t give a monkey’s leotard where I park the Laguna, or indeed what happens to it. Only last week, when the winds were whipped into a frenzy by Storm Seigfried – or whatever the latest bit of bad weather was called – a six-bar gate swung back and struck the nearside wing mirror.

Had this happened to my other cars, I’d have gone a little pale, muttered a few obscenities and prepared myself for a bill. In this instance, I didn’t give it a second thought until a couple of days later when I returned to the car to find the wing mirror folded in.

For the first four weeks of ownership, I even left the car unlocked, as the keycard’s lock function wasn’t working. Fortunately, I soon realised that the spare keycard is fully operational, but I can’t imagine leaving any of my other cars open to a legion of ne’er-do-wells.

That said, I’m guessing the underclass have standards – a getaway car is no good if it’s going to leave you stranded before Jamie Theakston has climbed into the back of a 3 Series patrol car to give chase.

It’s also an excellent car for the tip run, and not just because of the massive load area. Two dumpy bags of hawthorn bush cuttings were merely forced into the back, with little regard for the headlining, seats or trim. Who’d have thought a French estate could be so liberating?

To liberation joy, I’ll add comfort to the mix. You’d expect a family car from France to offer a soft ride, but I wasn’t expecting so much comfort from the Laguna. The seats are both supportive and soft, while the suspension is beautifully damped and cossetting. It’s hard to believe the car is running on 17-inch rims and 225/45 tyres. 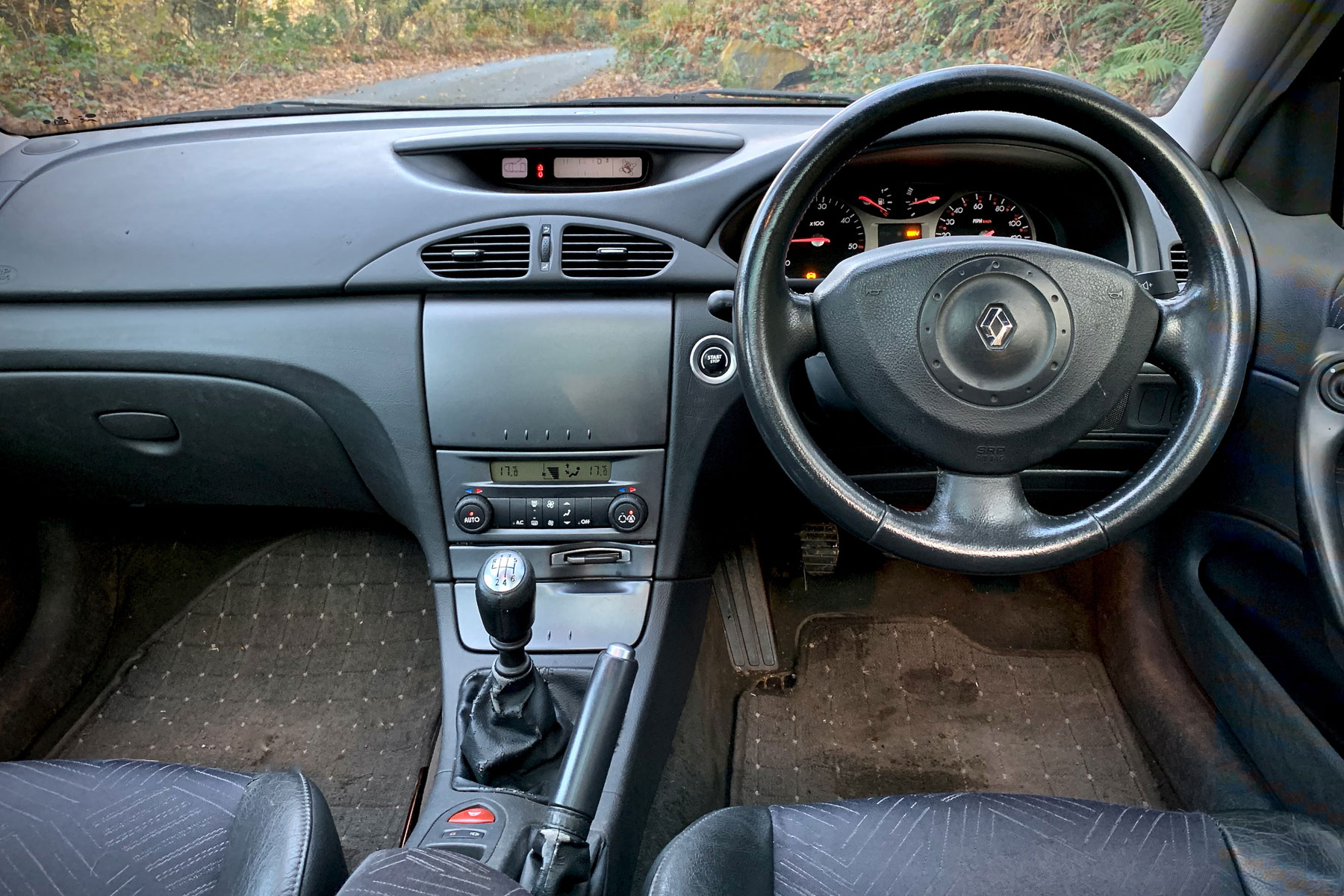 What started out as a bit of an experiment – I’ve bought a £100 Laguna, so you don’t have to – has the makings of yet another car to gain membership as a permanent member of the fleet. It’s the car I have used the most often since buying it four months ago to the day, and I’m already planning a trip to France. Well, if it’s going to die, it may as well be in its native country.

Many things are either broken, faulty or in need of attention. One of the washer jet units has gone AWOL, the outside temperature gauge is wrong, the climate control unit doesn’t light up at night, the sat-nav is dead, and the offside front alloy wheel requires re-sealing, to name just five problems off the top of my head.

Rainwater has a tendency to collect in the bottom of the nearside rear passenger door, the self-levelling headlights do a little too much self-levelling, the wiper blades sweep across the windscreen like an R. Kelly song, the split-tailgate doesn’t always shut at the first attempt, to name a further three issues.

But by far the biggest problem is the ABS light, which has the potential to kill the car when the next MOT looms into view next June. It might be a sensor, but it might be something more sinister, and therefore more costly. I should get it checked out, but I might be left with something akin to a doctor telling you how long you have left to live. 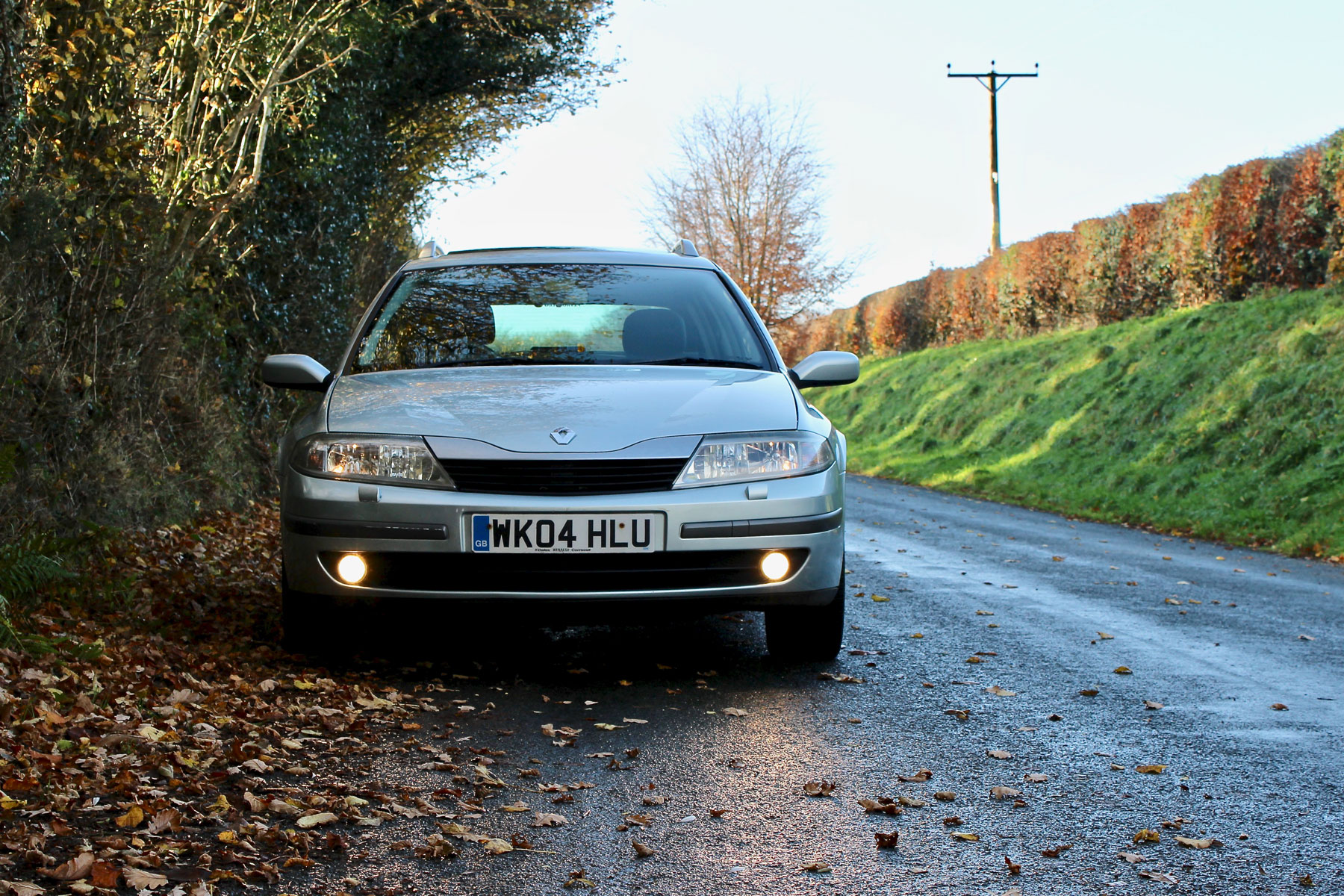 For now, ignorance is bliss, but that orange warning light serves as a reminder that the Laguna might not make it beyond its 15th birthday.

Until then, I will continue to enjoy life with one of the world’s least desirable and most unreliable cars, safe in the knowledge that I’m not locked into a lengthy finance contract and I’m driving a car that cost the equivalent of a single PCP payment on a new city car.

At the moment, it owes me £100 plus the cost of tax and insurance. If it dies tomorrow, I’ll get a few quid scrap, keep the seats for the office, and receive a refund for what’s left of the tax and insurance. That’s budget motoring done well, even if the smart money would go on a Honda Accord.

The best thing I have bought this year? Unquestionably. Because everybody needs a little mild peril and jeopardy in their life, right?