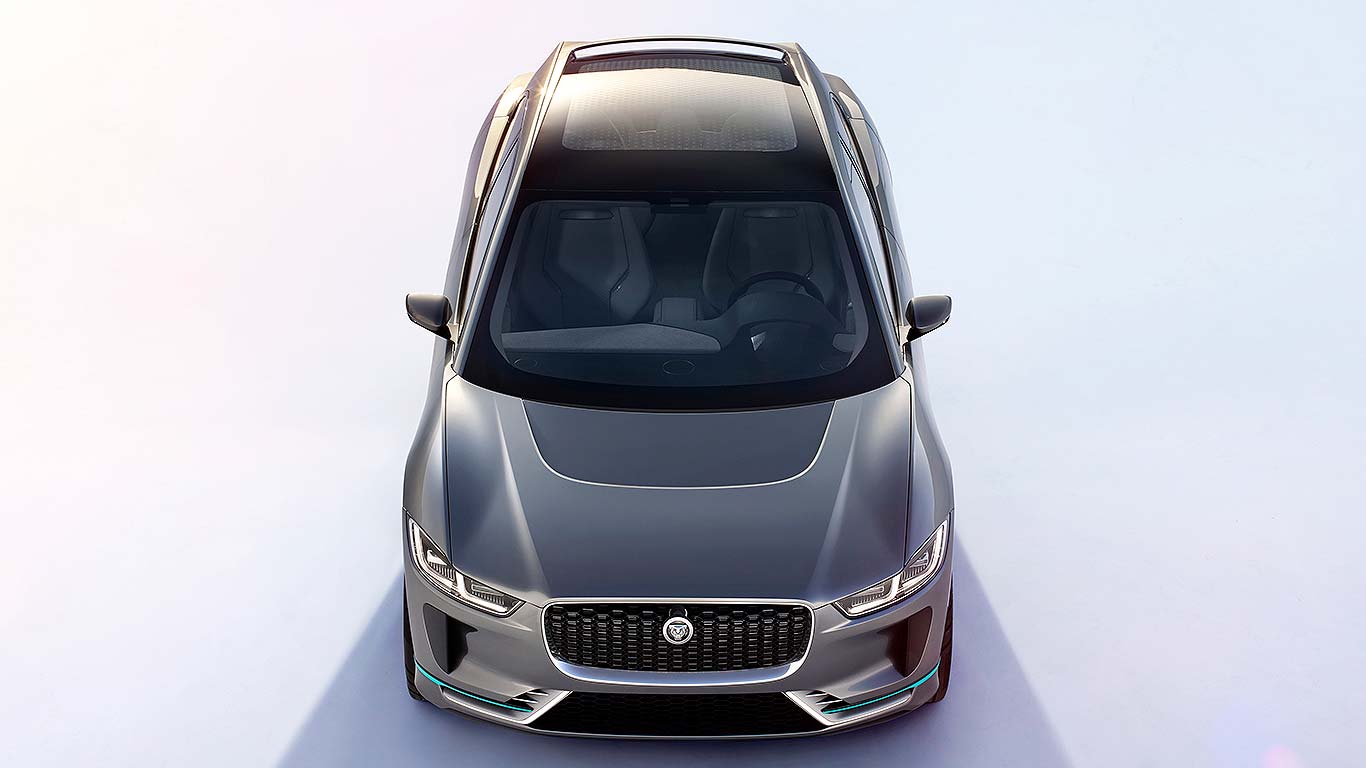 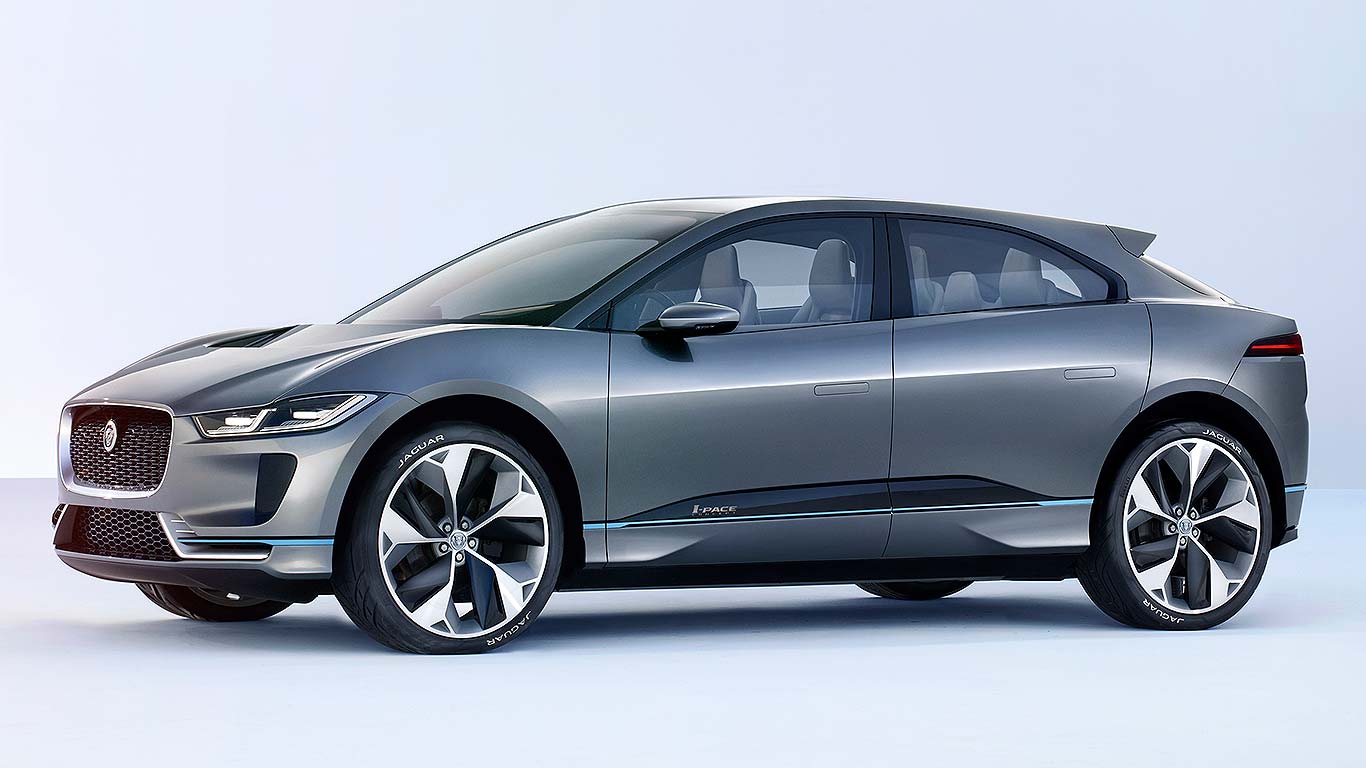 The Jaguar I-Pace Concept SUV is the British sports car firm’s first ever electric car – and if you already like the look of it, get ready: Jaguar will roll out the production version in 2017, and promises the new I-Pace will be on our roads by 2018.

In less than two years, this new zero-emissions Jaguar EV could be plugged in on your driveway. Read on to find out why it’s so electrifying… 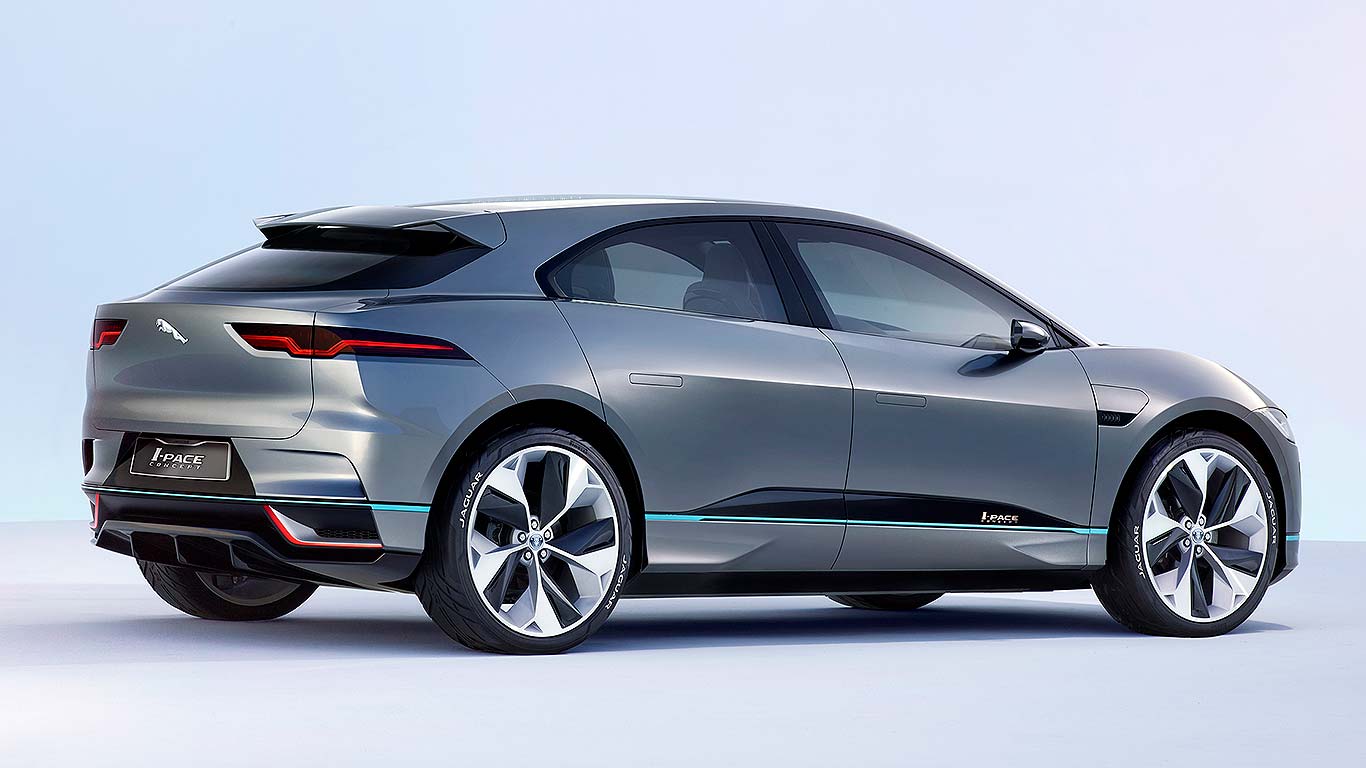 Jaguar has revealed the i-Pace Concept electric SUV ahead of the 2016 LA Auto Show: it will make the car the star of its show stand later this week. We reckon it’s already odds on to be the star of the show: with a 310-mile range, 0-60mph in 4.0 seconds, roomy and luxurious five-seat interior plus styling that’s a different take on a Jaguar, there’s lots to get excited about here.

Jaguar reckons it has rethought the car with the I-Pace Concept. The cab-forward design references the C-X75 supercar (driven by baddie Franz Oberhauser in Bond’s Spectre), rather than being a conventional car with a bonnet. It’s tall, like an SUV, but has a silhouette more like a sports car. It seats five and is smaller on the outside than sector rivals such as the BNW X5, but bigger inside than all of them. And all because it’s electric. 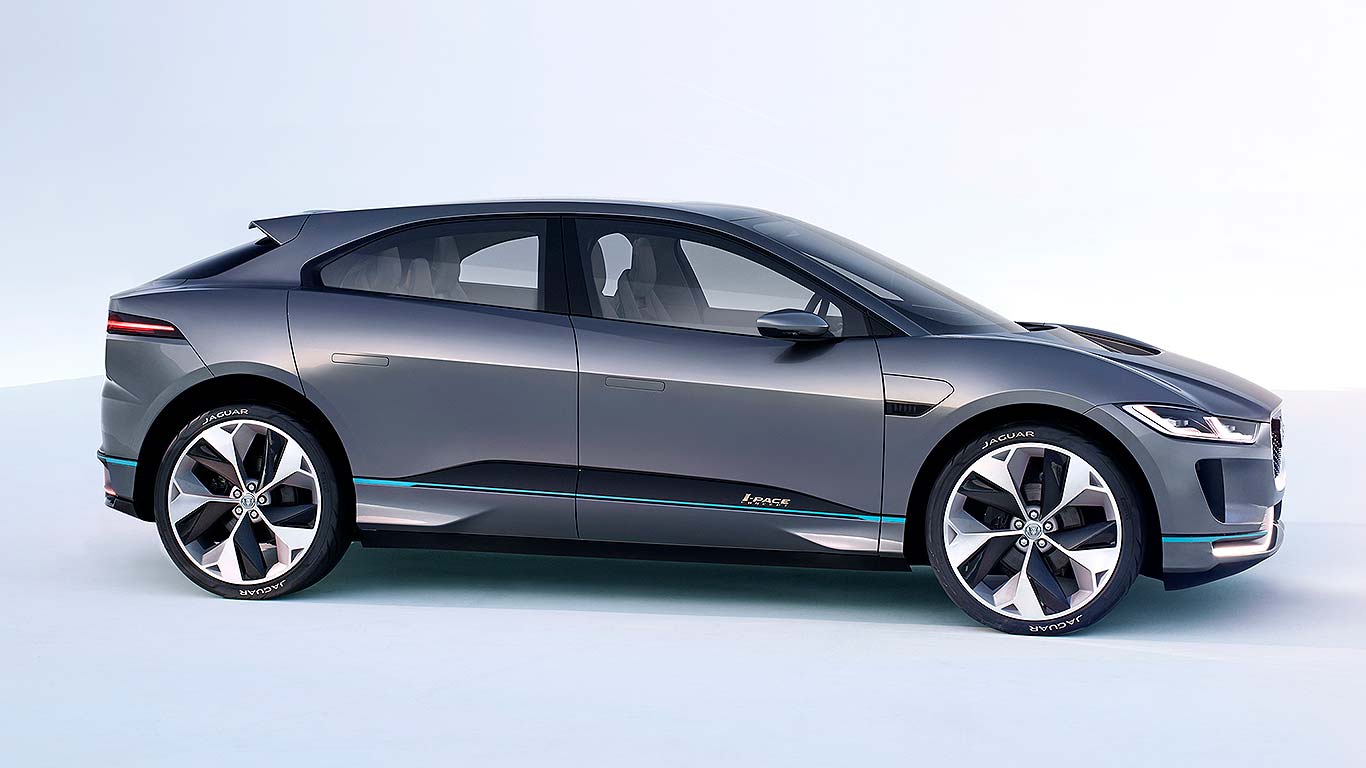 Because there’s no combustion engine, the wheelbase can be longer (almost 3 metres, in fact – longer than a Smart Fortwo is overall!), the overhangs shorter. The rear haunches can be more aggressive. There’s more interior space, better visibility and improved aerodynamics. Jaguar says the exterior mimics mid-size SUVs, but rear legroom matches full-size SUVs and luxury cars. 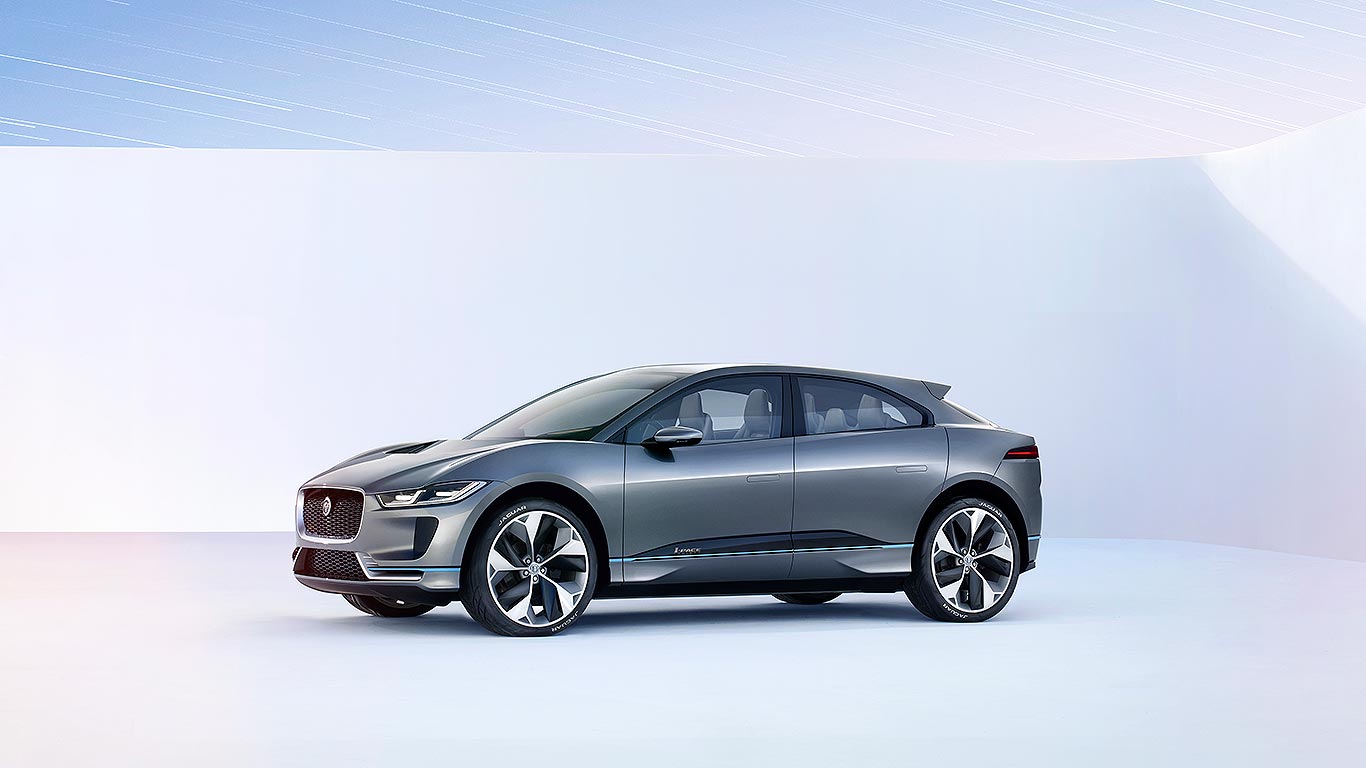 The appearance of the Jaguar I-Pace Concept is intentionally different to, say, the Jaguar F-Pace SUV, despite the styling similarities. Designer Ian Callum said he was determined the look would reflect the change in mechanicals. “With the I-Pace Concept, the revolution is in the profile, not the design language,” he said. “The profile is possible because this car is electric. It’s not just that we wanted to create something that was very different from anything else we do: we wanted the design to celebrate the new battery electric technology.”

Design highlights of the Jaguar I-Pace Concept include the low cabin, sporty windowlines and heavily curved glass, the ultra-low (for an SUV) bonnet. It’s as aerodynamic as it looks: the Cd drag factor is just 0.29. At the front, the current Jaguar brand grille is retained, and there’s a C-X75-style bonnet scoop that cuts drag. At the rear, there’s no wiper, just a ‘fast’ tailgate shape and hydrophobic glass.

An interior Jaguar can be proud of, at last 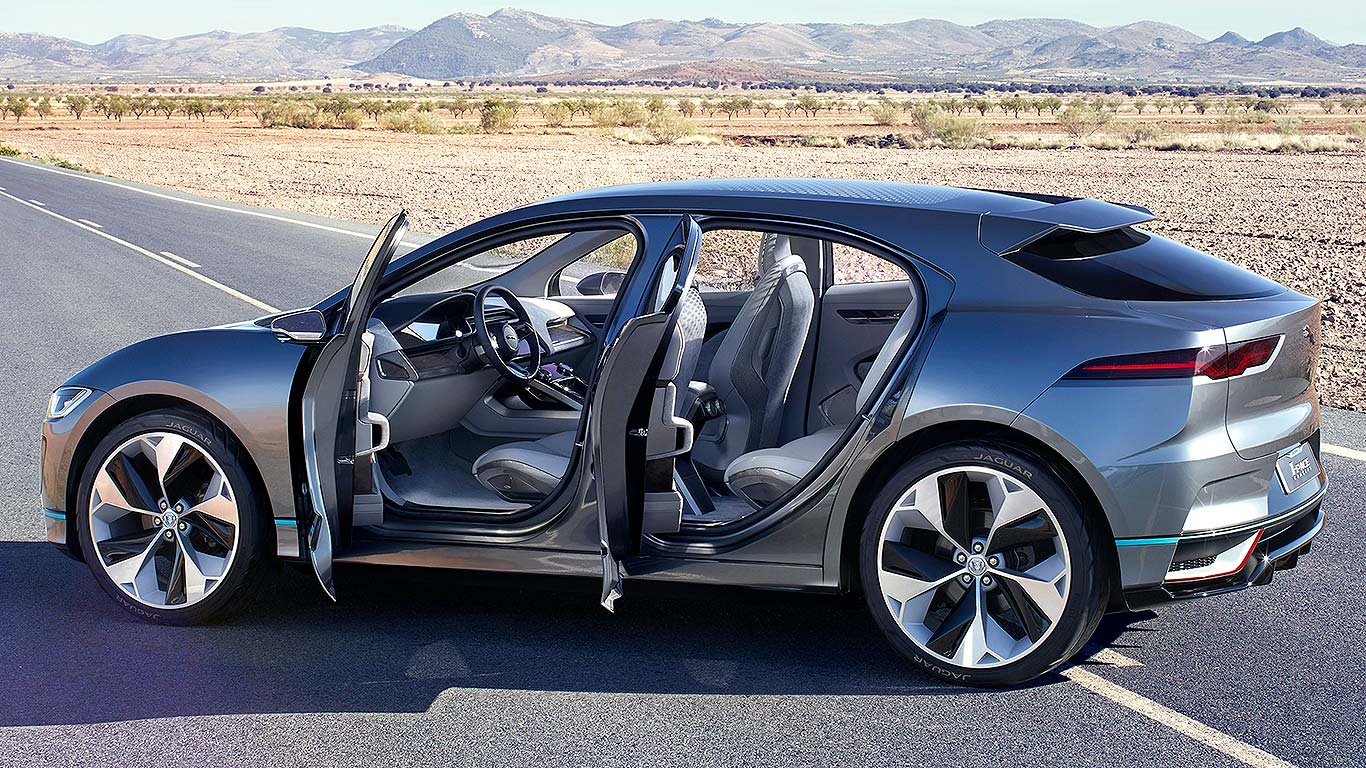 The I-Pace Concept seats five within a cabin that’s as futuristic-Jaguar as the outside. Interiors has been a weakness of the new-era of Jaguars up to now; only the F-Pace really passes muster. The I-Pace Concept is a massive leap forward and suggests future Jaguar interiors are going to be as appealing as the exteriors. Airy, sporty, contemporary and visually appealing, it’s a clever, warm cabin that Jaguar is rightly already chuffed with.

It has a flightdeck rather than a dashboard 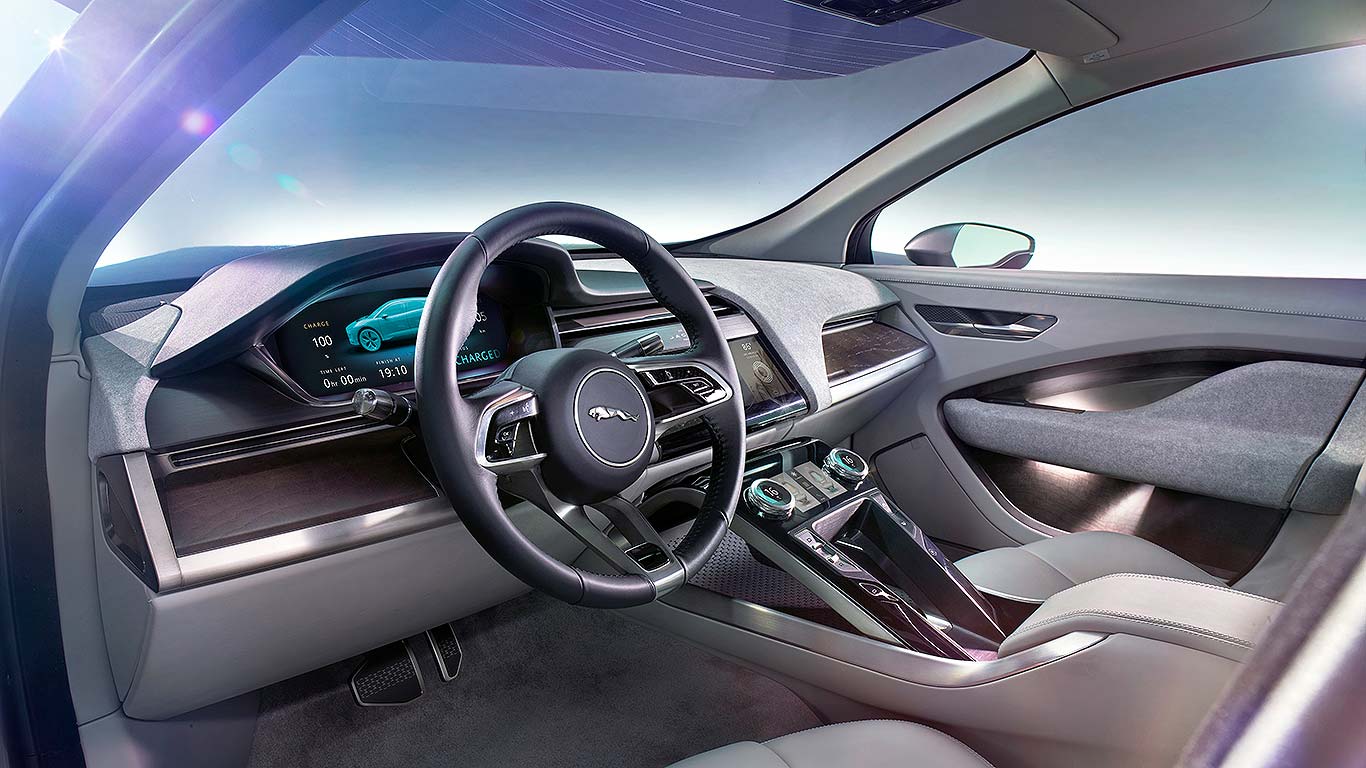 Jaguar says the I-Pace Concept launches its new ‘flightdeck’ interface for driver controls. There’s a floating centre console, simple and clear displays, plus a combination of touchscreens, rotary dials and multi-function buttons: Jaguar hasn’t gone fully-digital here. There are smart capacitive switches on the new-design steering wheel, invisible until activated, which respond to the driver with haptic ‘micro-clicks’ when pressed. A bit like an iPhone.

It has stowage boxes not gearboxes 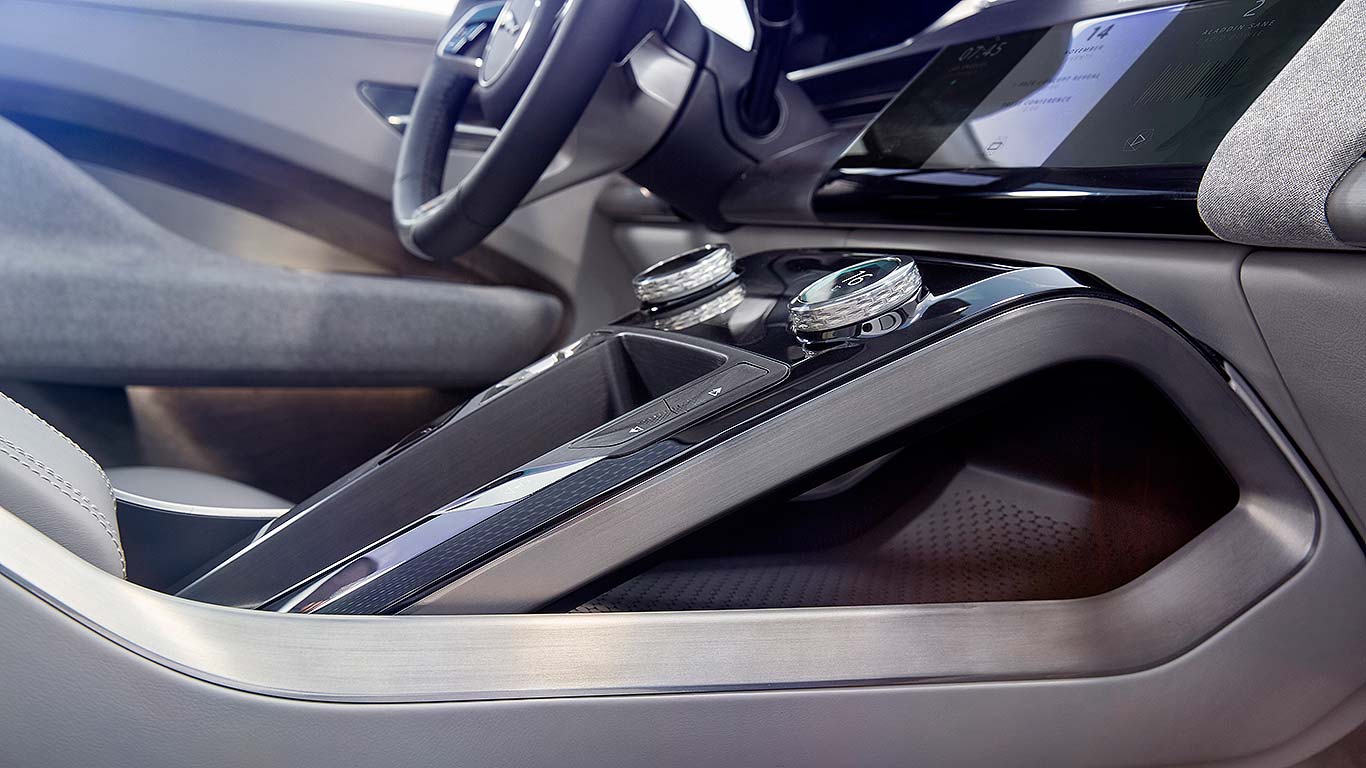 Because there’s no transmission, there’s a clever 8-litre stowage area in the centre console. And no transmission means no traditional gearlever, so there’s an extra stowage area where that would normally sit. Jaguar calls the seats ‘luxury slimline’ pews and calls the driving position ‘sports command’. Higher than normal, but still sporty-feeling.

There are some beautiful design details 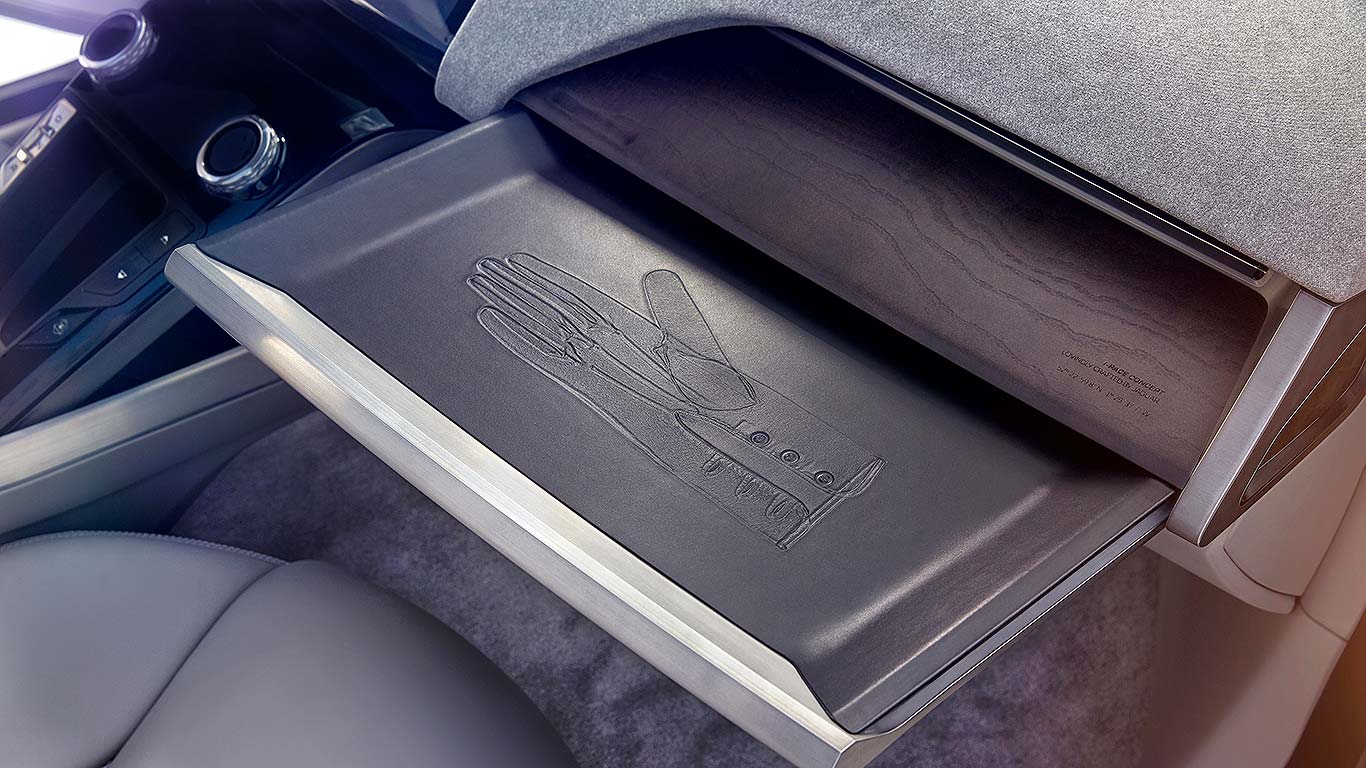 Jaguar’s using some gorgeous contemporary materials within the I-Pace Concept. The burl wood on the dash is laser-etched with the (slightly cheesy) words ‘Lovingly crafted by Jaguar Est. Coventry 1935’. Paw-print labels are stitched into the seat seams (Jaguar, geddit?). There are laser-etched driving gloves on the slide-out passenger shelf. The Jaguar lozenge pattern features throughout. It’s luxury, boutique-like attention to detail we hope carries through to production. 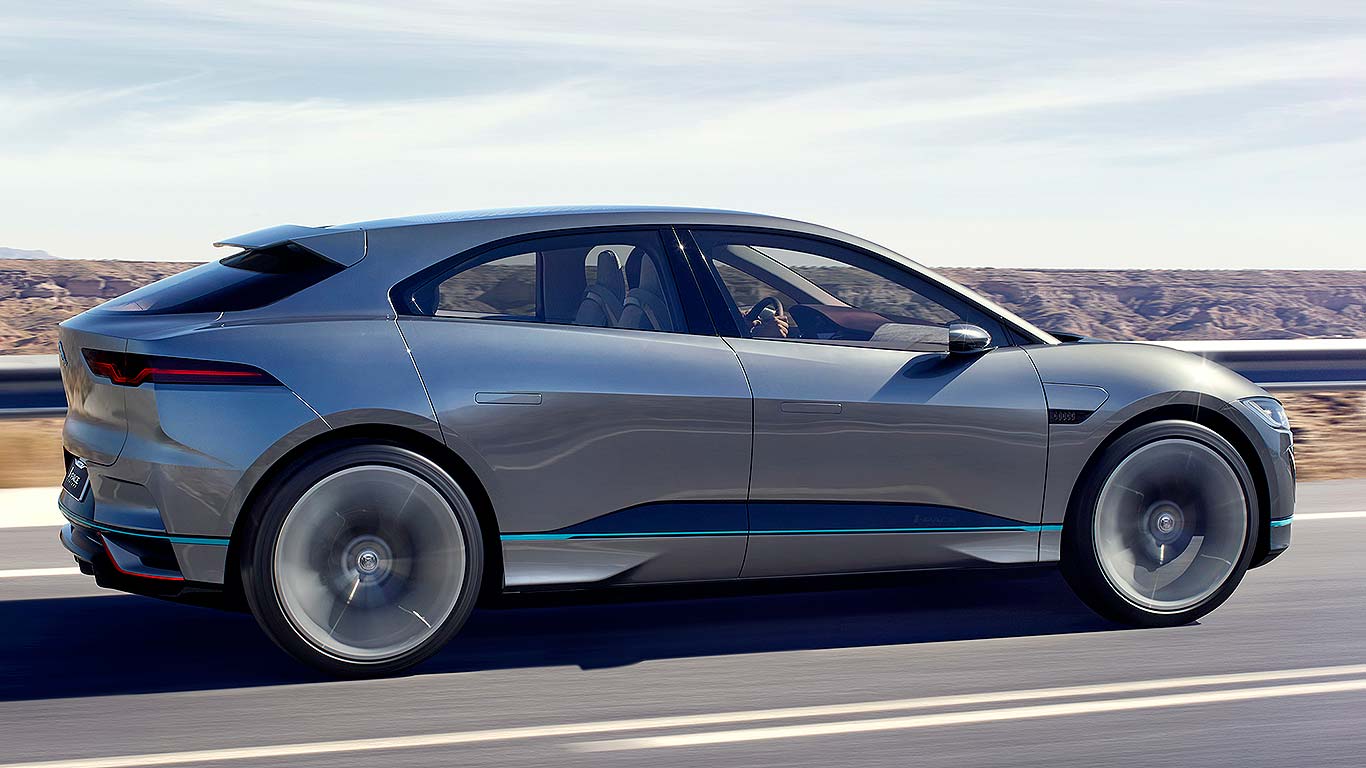 The Jaguar I-Pace Concept uses dual 200hp electric motors, one on the front axle and one on the rear. That means a combined 400hp and 516lb ft of torque, sent to all four wheels. Jaguar says 0-60mph in 4.0 seconds, so faster than a cooking Porsche 911. There’s also no lag and no gearchanges, simply seamless surge. It’s going to be an exciting performer, alright. 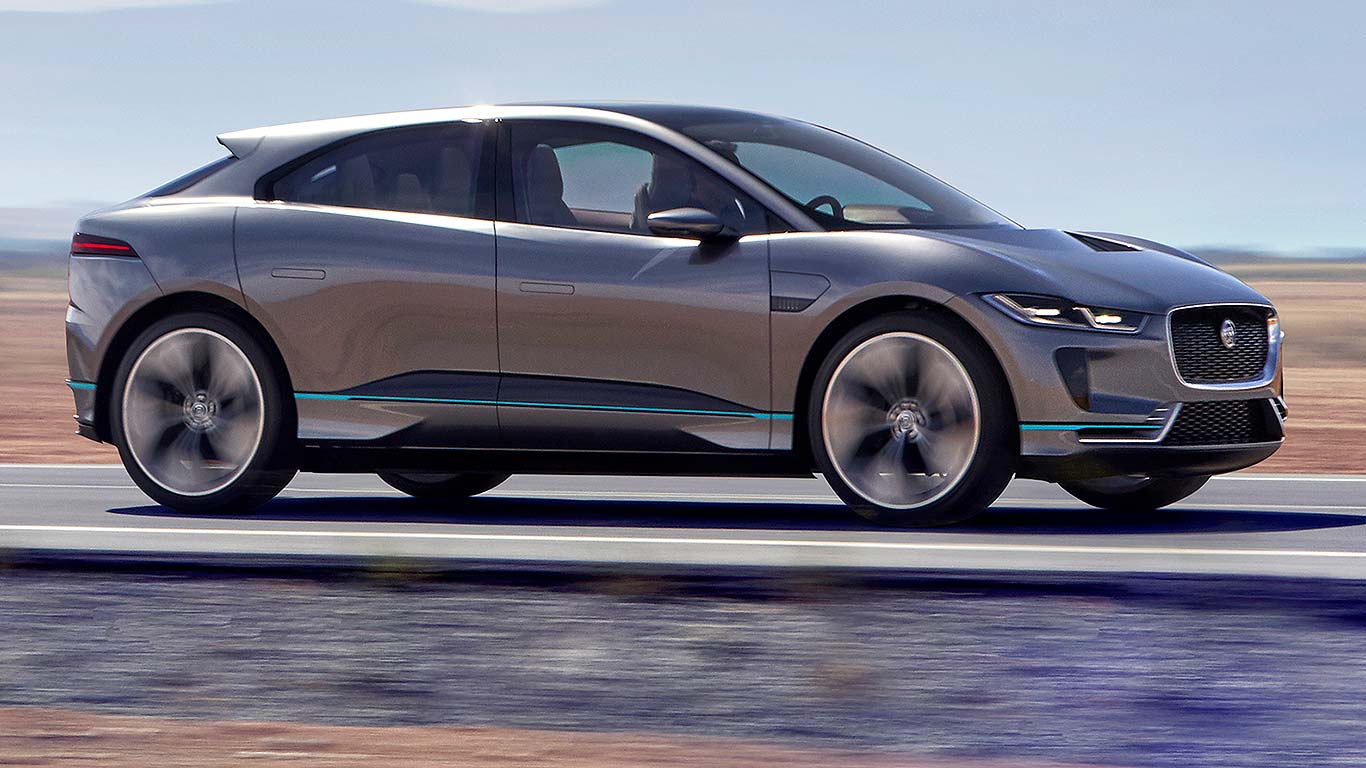 Jaguar has fitted the same type of double wishbone front suspension as on the F-Type to the I-Pace Concept. Sports car suspension for a sports car SUV, it insists. With a low centre of gravity and centralised masses from having the batteries packed low within the wheelbase, chief engineer Mike Cross is promising “this will be the first electric vehicle developed for enthusiasts who love driving”. 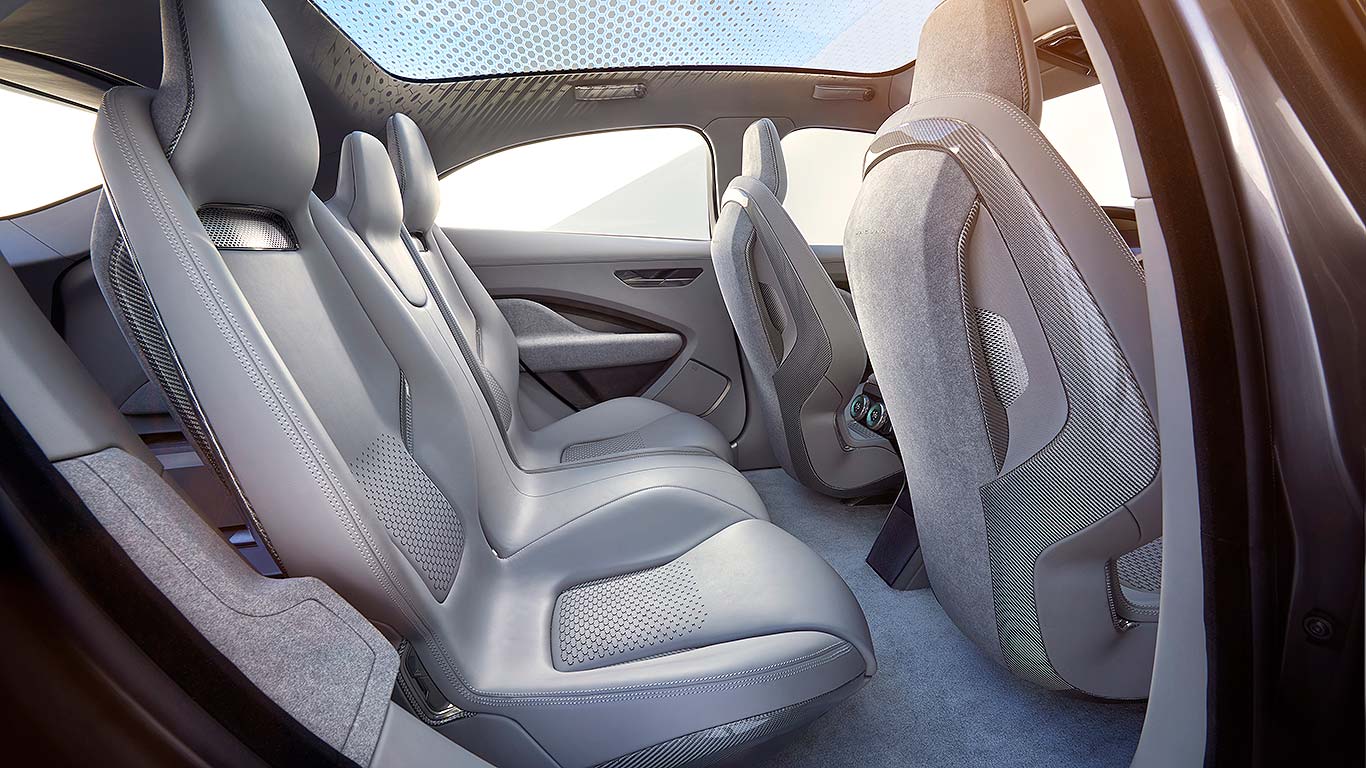 The Jaguar I-Pace Concept, as mentioned, is a seriously roomy five-seat SUV, insists Jaguar. Moving the front-seat occupants forwards has created more space for those in the back. And in the boot: it’s a practical 530 litres with the seats up, despite the need to pack batteries in. And because the front electric motor is space-efficient, there’s even another small 28-litre boot in the front, a bit like a Porsche 911.

It has a Tesla-like electric range

Tesla’s electric cars set the benchmark for EV driving range. The Jaguar I-Pace Concept is able to measure up though. On the European NEDC cycle, the range between battery charges is over 310 miles; on the U.S. EPA cycle, it’s over 220 miles. For the average commuter, that means once-a-week recharges. A fast charge will top up the 90kWh lithium ion battery pack to 80% full in 90 minutes. 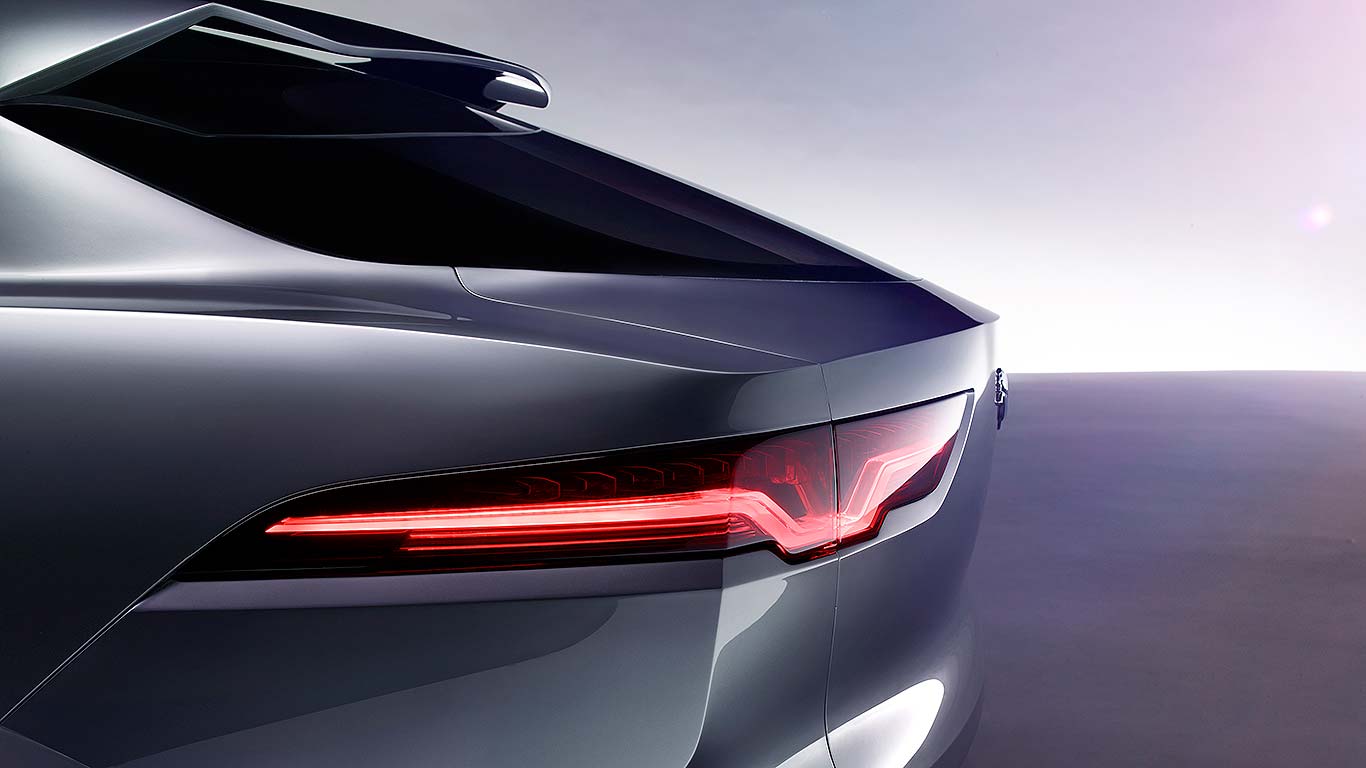 “The I-Pace Concept is a radical departure for electric vehicles. It represents the next generation of battery electric vehicle design,” says Callum. “It’s a dramatic, future-facing design – the product of authentic Jaguar DNA matched with beautiful, premium details and British craftsmanship.”

And the best bit of all?

The Jaguar I-Pace Concept is not just a concept! 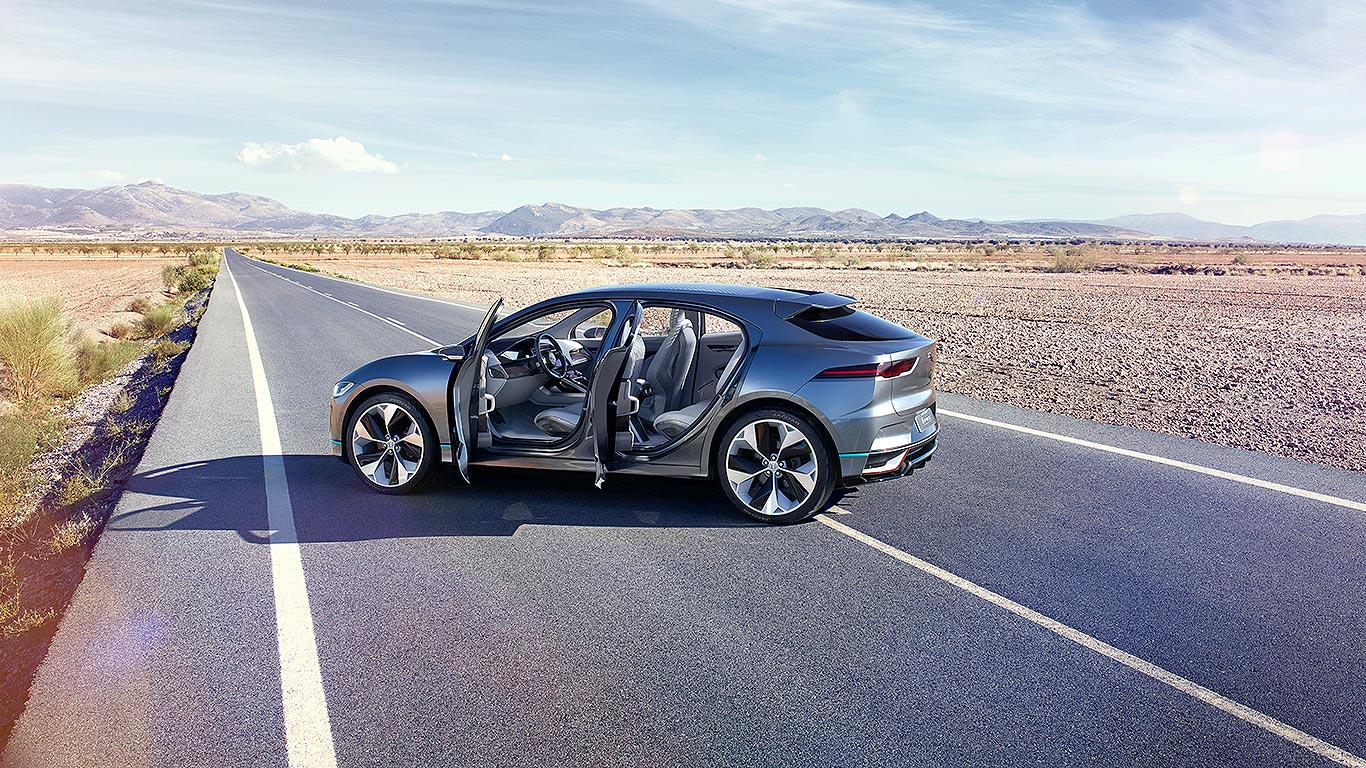 The Jaguar I-Pace isn’t some flight of fantasy either. “It is a preview of a five-seat production car that will be on the road in 2018,” confirms Jaguar. “This will be Jaguar’s first-ever battery-powered electric vehicle.” Yes, things are happening fast: so fast, the production version will be fully revealed before next year is out. The Jaguar I-Pace performance electric SUV is coming, soon. Want one yet?