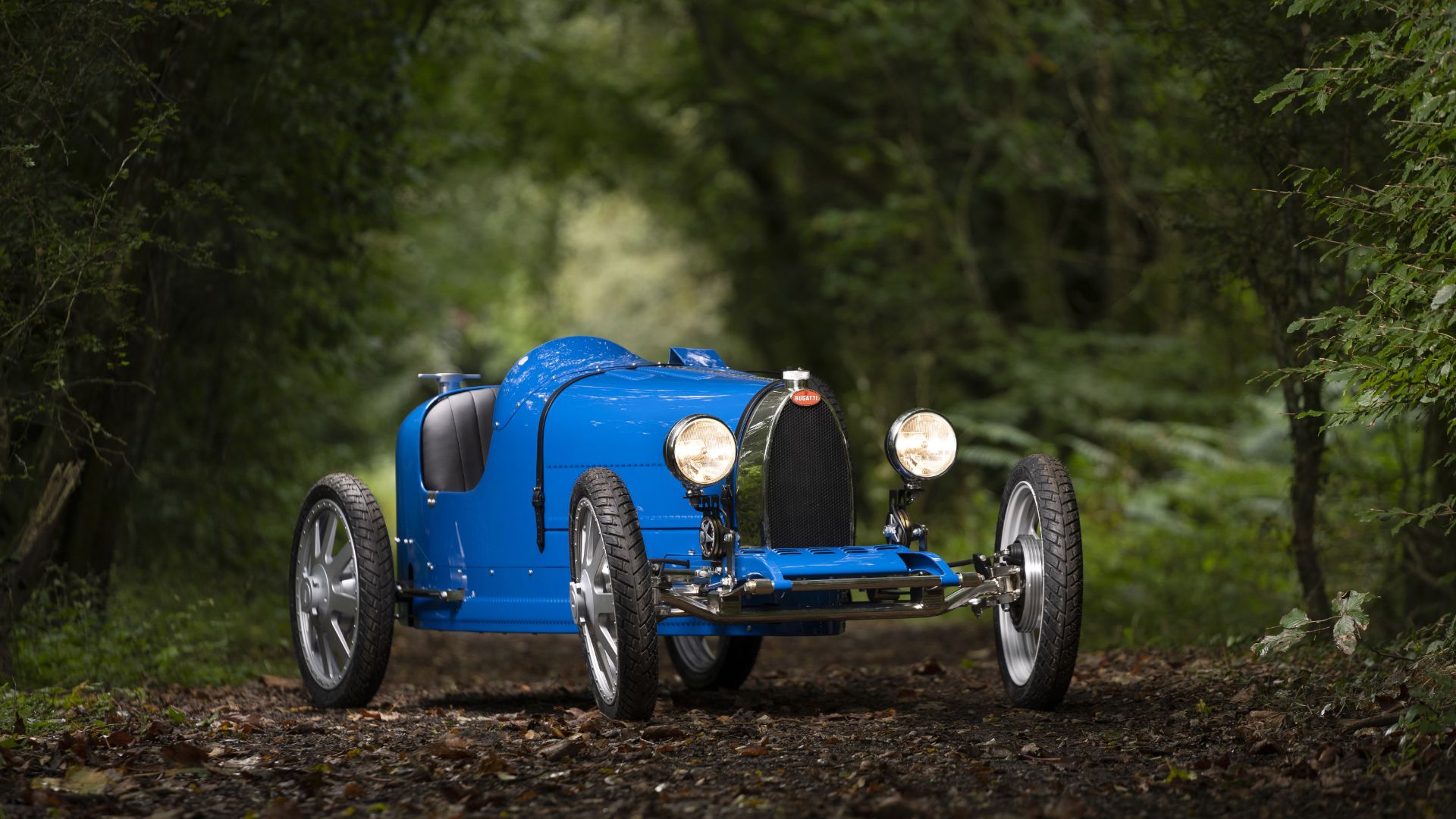 Bugatti’s 110th birthday present to itself is a very special recreation. It’s not the sort of thing you’ll find gathering dust in an underground collection, however. Meet Baby II, the second scaled-down Bugatti for kids, that’s a 75 percent scale replica of the Type 35.

“When a company with such a colourful and proud history as Bugatti turns 110, you can allow yourself to look into the rearview mirror a little bit more than you usually would,” said Stephan Winkelmann, President of Bugatti.

“Thus, it is only fitting for our anniversary year to revive the Bugatti Baby. 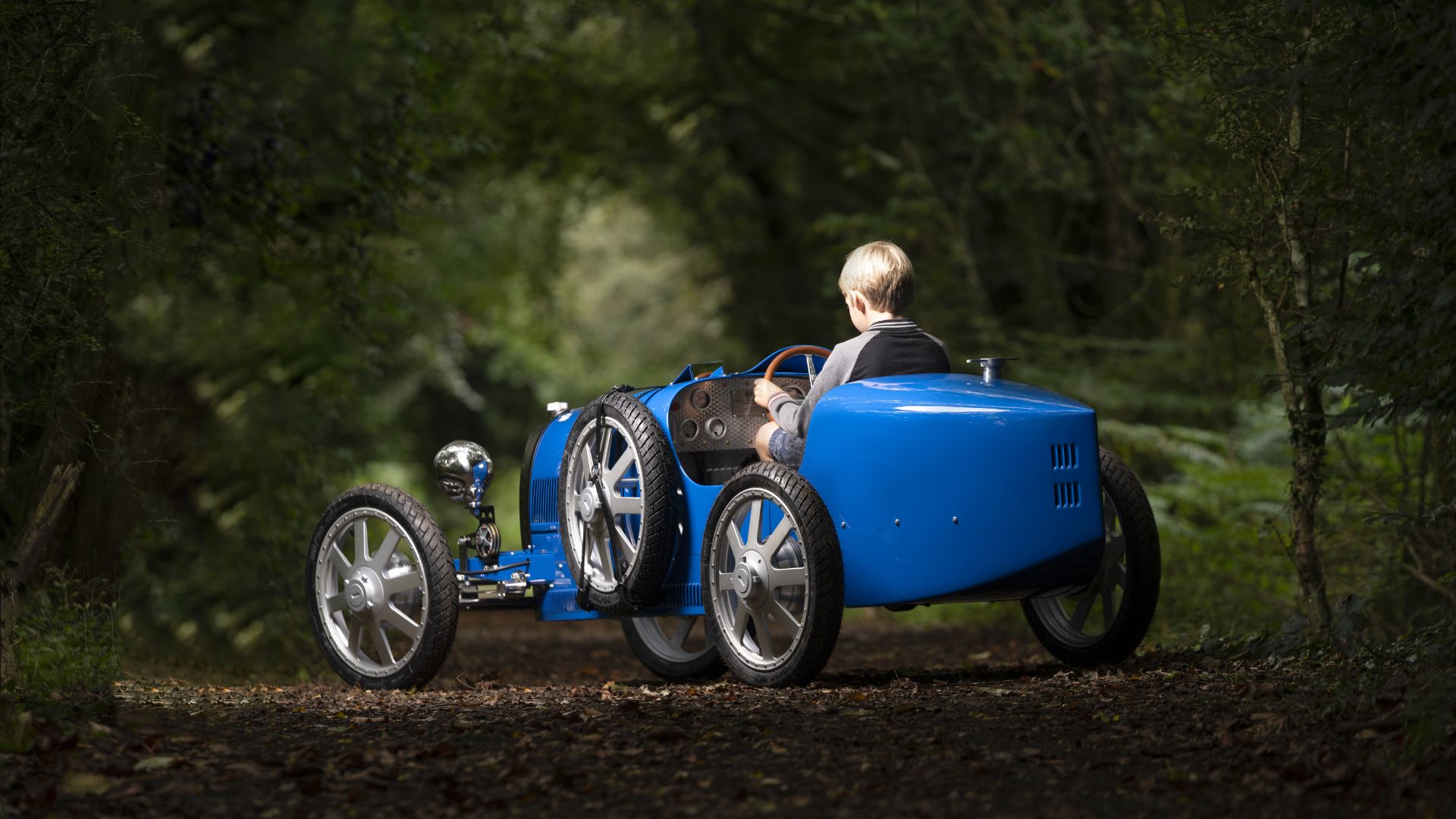 “The Bugatti Baby II has grown up to be more of a teenager now, and I must say I’m very excited to see it drive around on the Bugatti premises in Molsheim.”

Bugatti partnered with The Little Car Company to bring this next development of the baby to life. The XP1 prototype is now ready for testing by VIPs at Bugatti’s Molsheim home.

This iteration is a fair bit bigger than the 50 percent scale model revealed at Geneva. As a result, it can now take older drivers and passengers now, too.

It has got a sliding pedal box to accommodate people of all sizes, so more senior family members can come along for the ride. 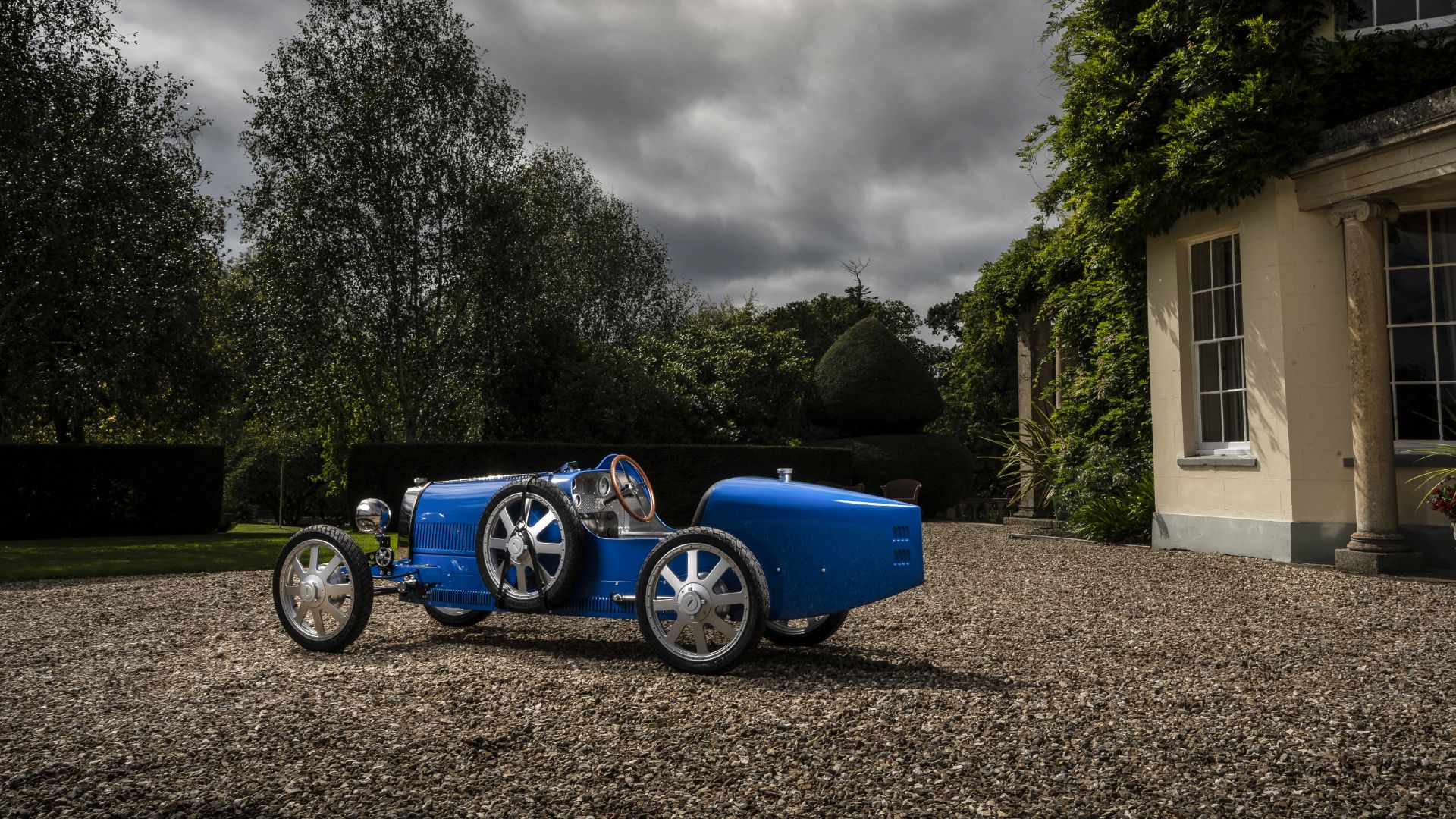 You won’t find a historic straight-8 or a monstrous quad-turbo W16 under the bonnet of this miniature from Molsheim. The Baby II is currently the only electric Bugatti. It packs lithium ion batteries and even has regenerative braking.

Still true to the Type 35 are the iconic wheels, and the four-spoke steering wheel. Where once there was a rev counter, oil and fuel pressure gauges, there is now a speedo and battery level indicator.

There’s also a power gauge that tells you how much power you’re using. Just like in a Veyron or a Chiron. The fuel pump has been repurposed as a forward and reverse selector. A horn, rear-view mirror, handbrake and headlights also feature. 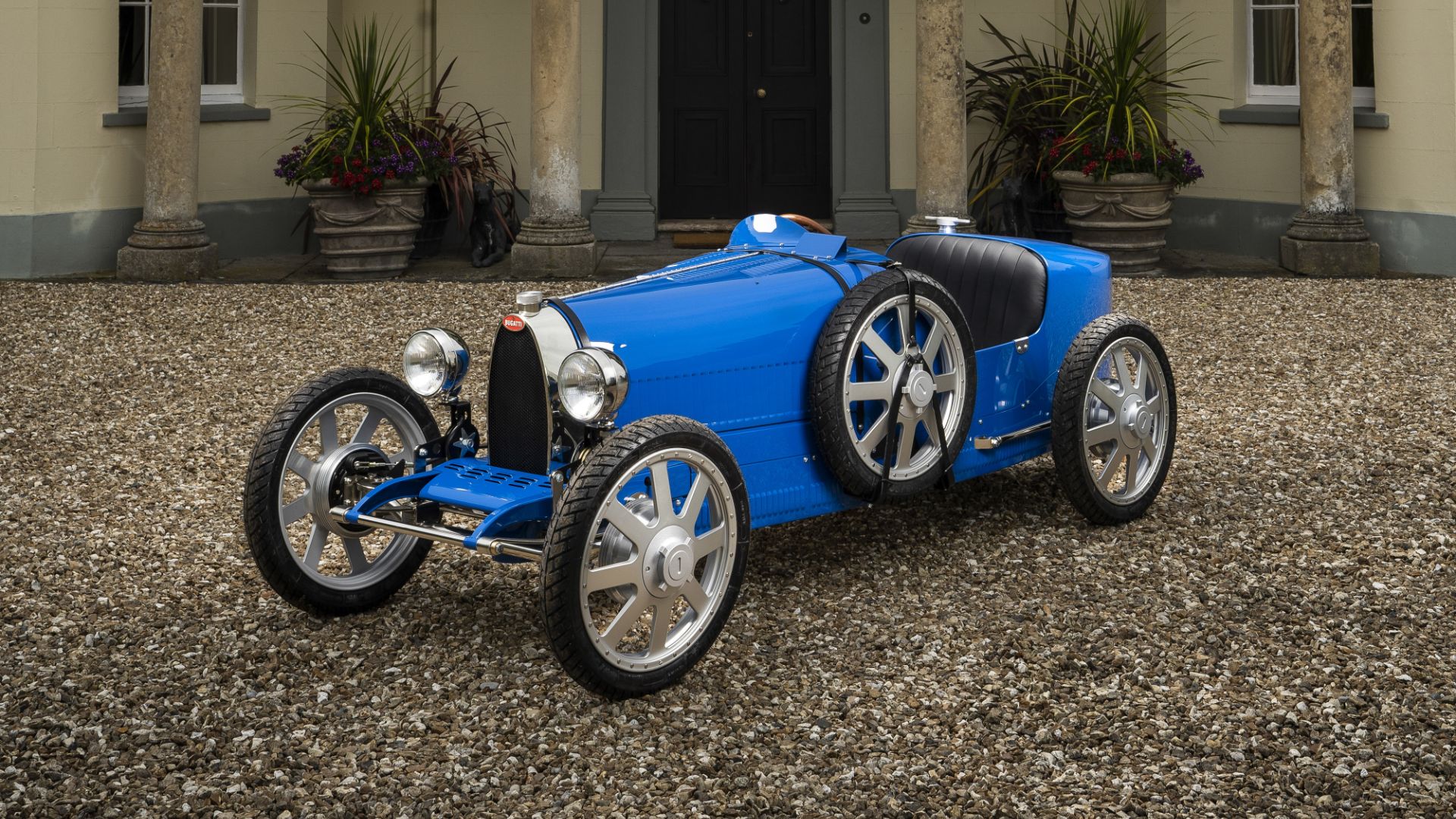 Performance is impressive for what it is. ‘Child mode’ sees the top speed limited to 12 mph, while ‘adult mode’ gets you up to 27 mph. Power for the respective modes is a respective 1.3 horsepower and 5.3 horsepower.

Very cool is the fact that some will come with a Veyron and Chiron-style ‘Speed Key’ to unlock even more performance. Ask for the ‘Vitesse’ or ‘Pur Sang’ specs for that.

It’s even got a limited-slip diff, which is actually a worthy addition given the all-electric torque. The larger 2.8 kWh battery will give the baby a range of over 20 miles, while there is also a 1.4 kWh pack available. 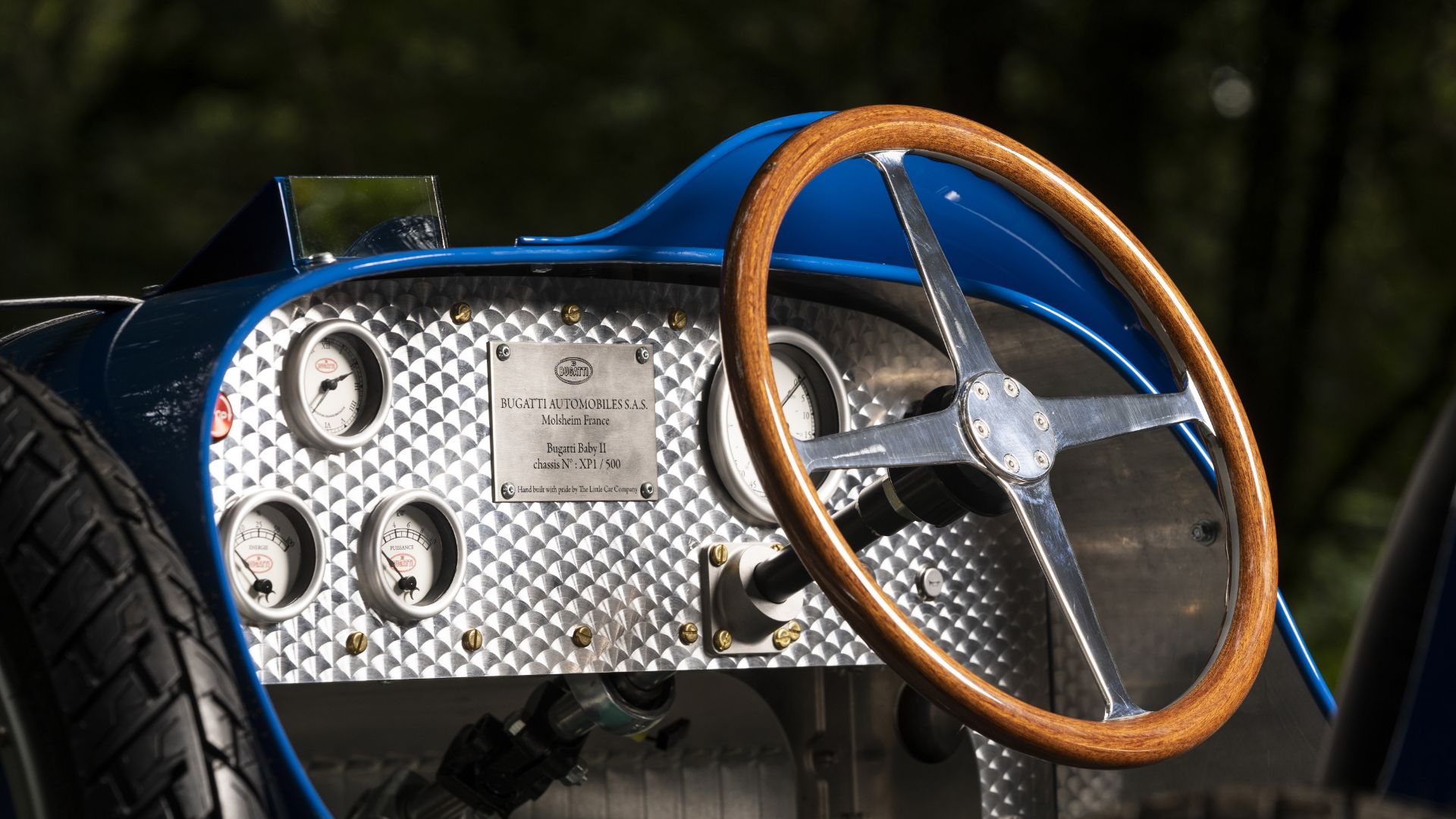 Those buying a Baby for their little escape artist will take comfort in knowing that you can also get a remote control, to shut the baby off from a range of up to 50 metres.

As per the reveal at Geneva, 500 are to be built and they all sold out within three weeks of the show. For your minimum of €30,000, you can get your Baby II in a variety of colour options, though French Racing Blue is the standard spec. Production starts early next year.