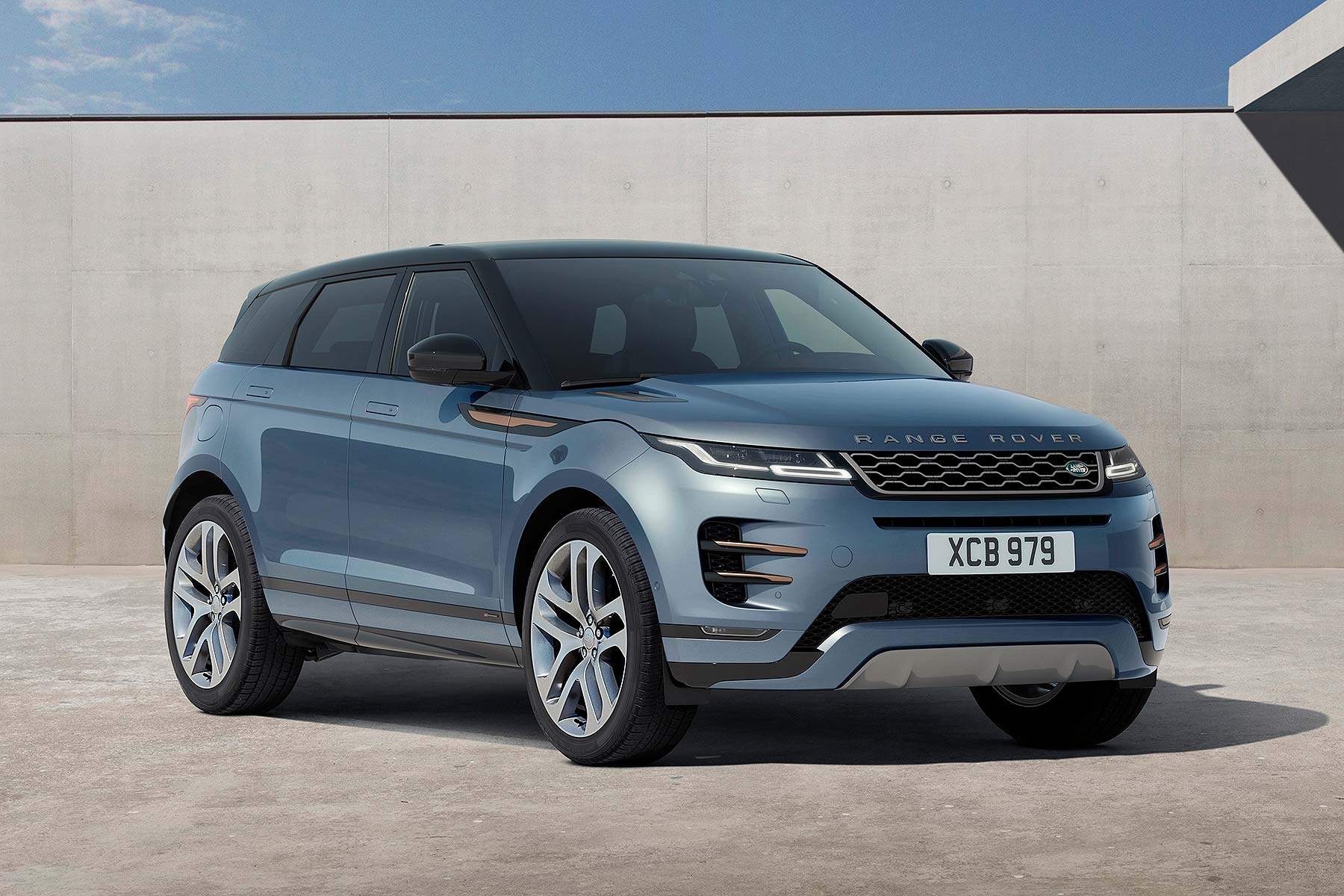 The all-new Range Rover Evoque has been revealed at a glitzy launch event in East London. A careful evolution of the original car, Land Rover says it delivers exactly what customers asked for: make it like the original, only better.

Priced from £31,600, ordering is open now, with first deliveries expected from spring 2019. 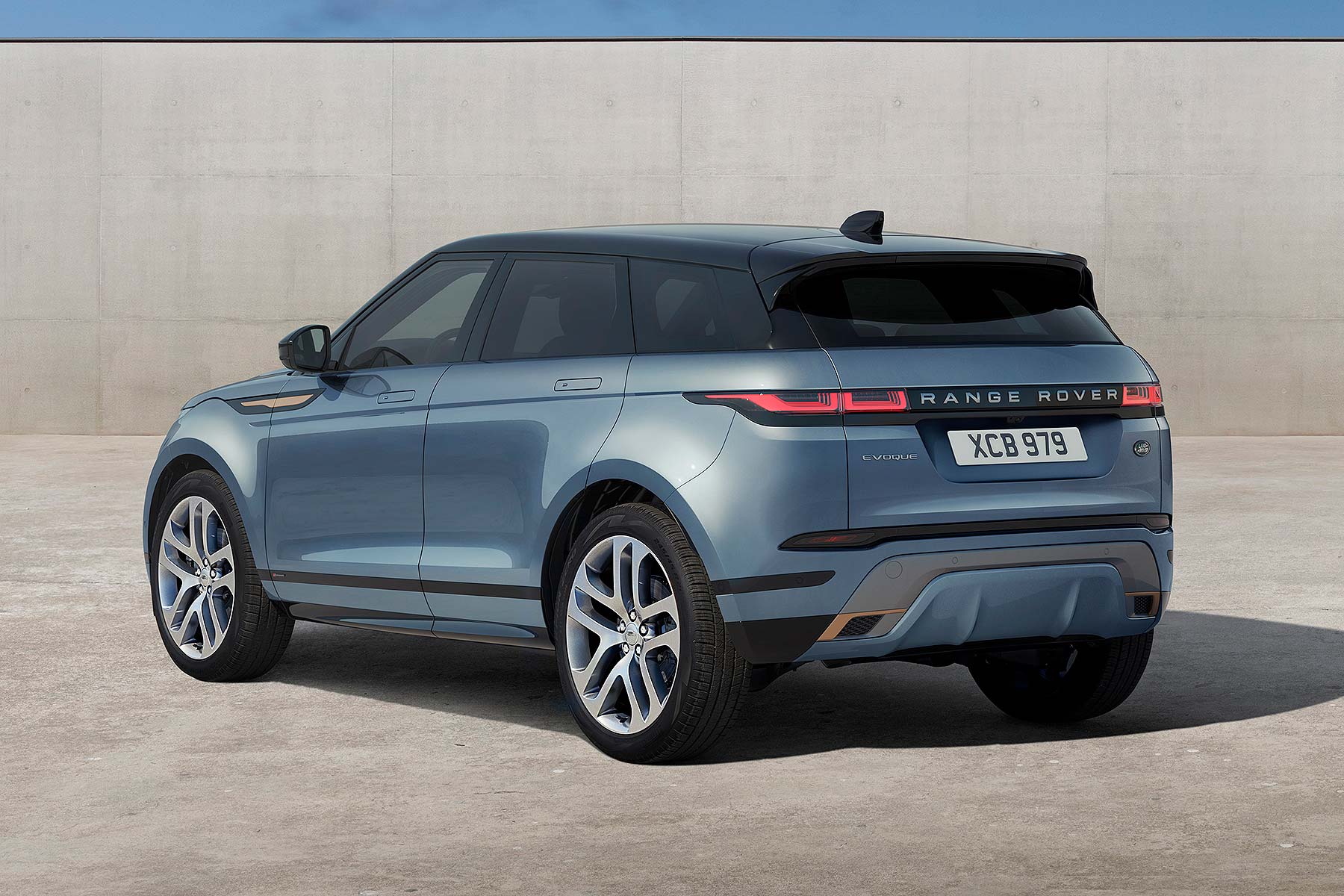 Jaguar Land Rover MD Rawdon Glover says it is “a great second album, taking the Evoque to a new level of refinement, luxury and sustainability, while preserving all the charm of the first model”.

Overseen by design chief Gerry McGovern, the new Evoque is built on an all-new platform called Premium Transverse Architecture. The body is stiffer, the wheelbase longer, but exterior dimensions are largely unchanged (it remains less than 4.4 metres long).

The new Evoque will launch with mild hybrid petrol and diesel engines, with plug-in hybrids following in 2019. Only the basic entry-level manual will be a conventional non-hybrid engine; all other launch cars will have 48V ‘micro hybrid’ tech. 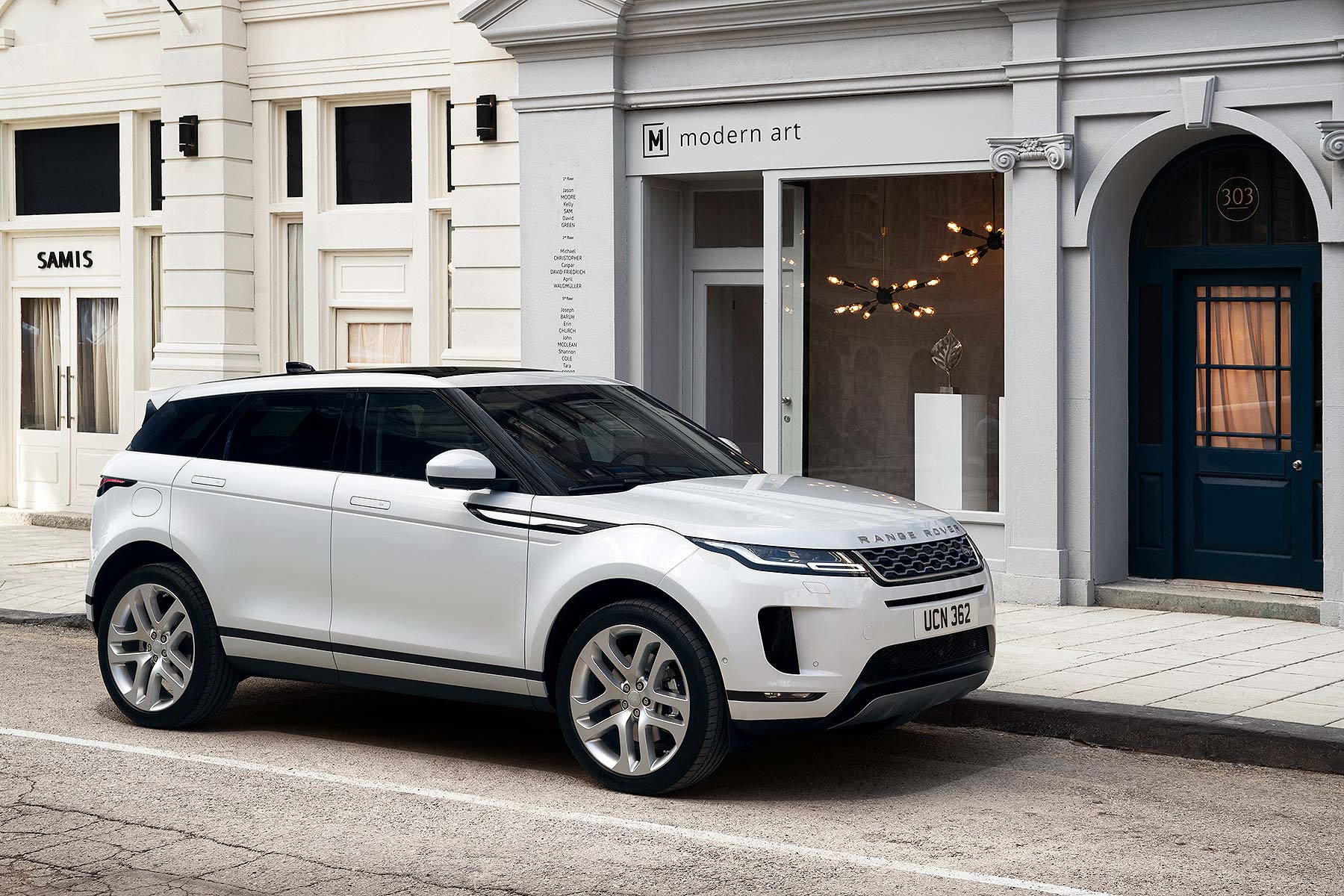 Visually, the new Evoque follows McGovern’s new ‘reductionism’ mantra. The lines and creases of the original have been minimised, following the lead of the Range Rover Velar, the reigning World Car Design of the Year.

Yet it’s still an Evoque, he insists, thanks to the coupe-like silhouette, ‘fast roofline’ and rising waist.

The new car thus still has the same poor rear visibility of the original – which Land Rover has solved with a clever ‘Clearsight’ rear-view mirror that turns the conventional glass into a high-definition widescreen display (the camera is dirt-proof and water-repellent). 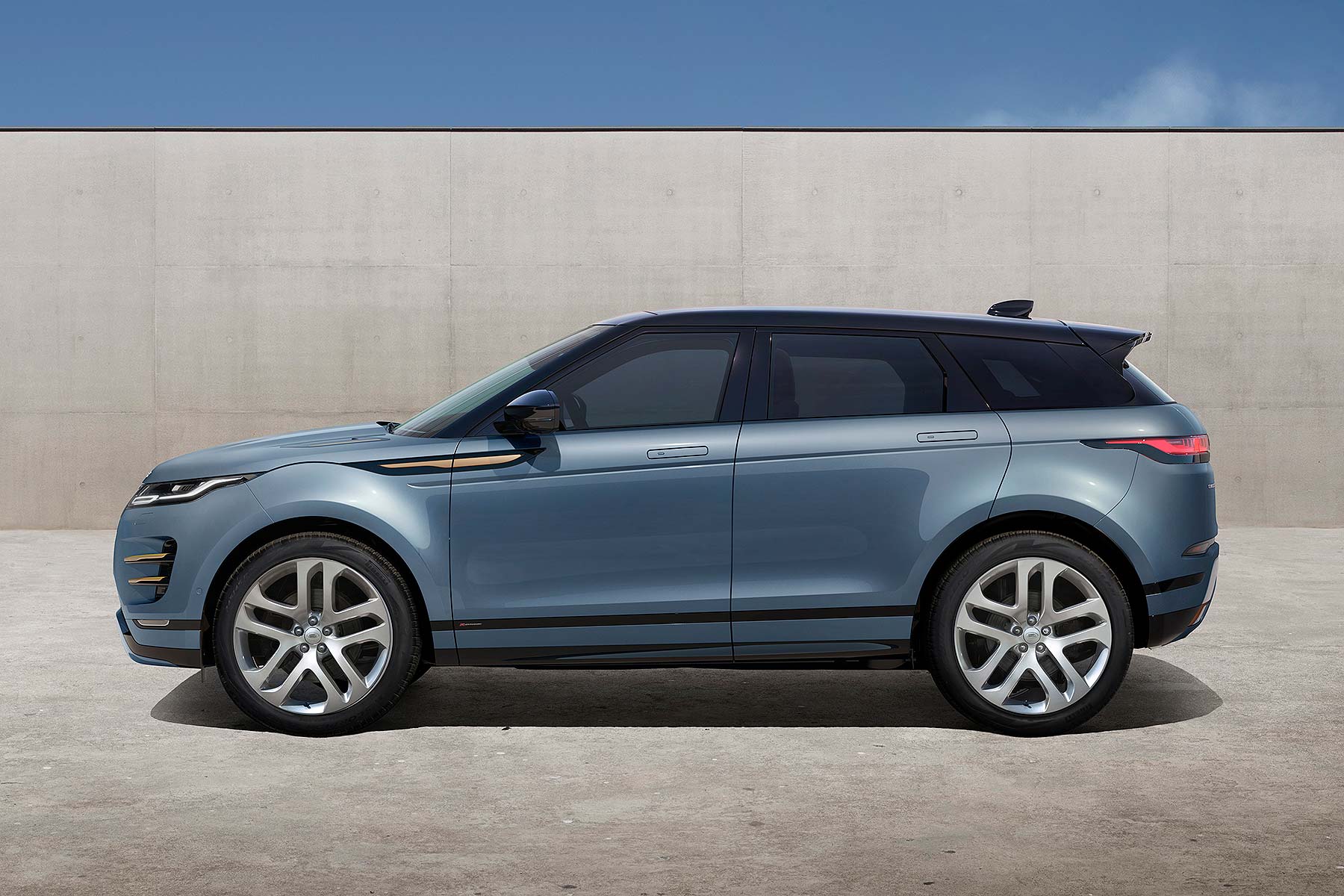 The new car has a more premium appearance, too, thanks as much to richer paint and tighter panel gaps as the cleaner lines. The roof is laser-welded, so there’s no need for an add-on roof rail, the rubber window strips are minimised, glazing is flush and use of contrast plastics is minimised. It even gets the retractible doorhandles from the Velar. It’s less ‘noisy’ and posher-looking as a result.

And, yes, it’s familiar, but this is intentional, says McGovern. “People loved it, so we’ve retained its unique character… there’s always a desire for radical change but sometimes it’s just as important not to change.

“We make no apologies for that: there’s nothing wrong with clear progressions – look at the Porsche 911, look at the Range Rover itself.” 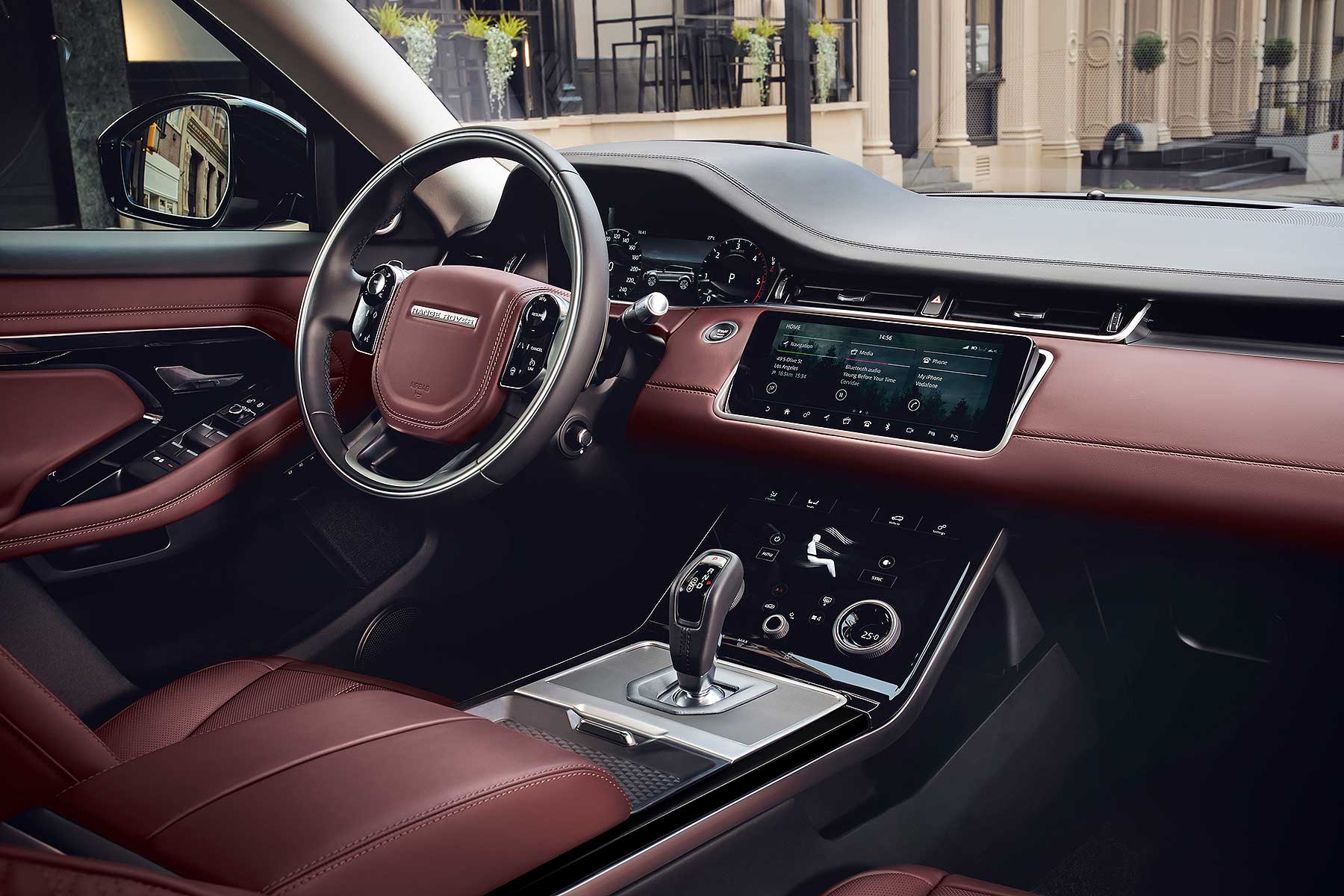 The interior is more of a radical step on. “We’ve retained the DNA but applied the reductive theme here, too,” said McGovern, who described it as a “revelation.” It’s simpler, cleaner, has more technology and is significantly better quality.

There’s less switchgear, and what there is boasts a classier look and feel: “It’s all about getting a premium, luxury level pf precision and quality”. The central touchscreen is large and high-definition, while the additional Touch Pro Duo screen first seen in the Velar features on higher-grade variants. 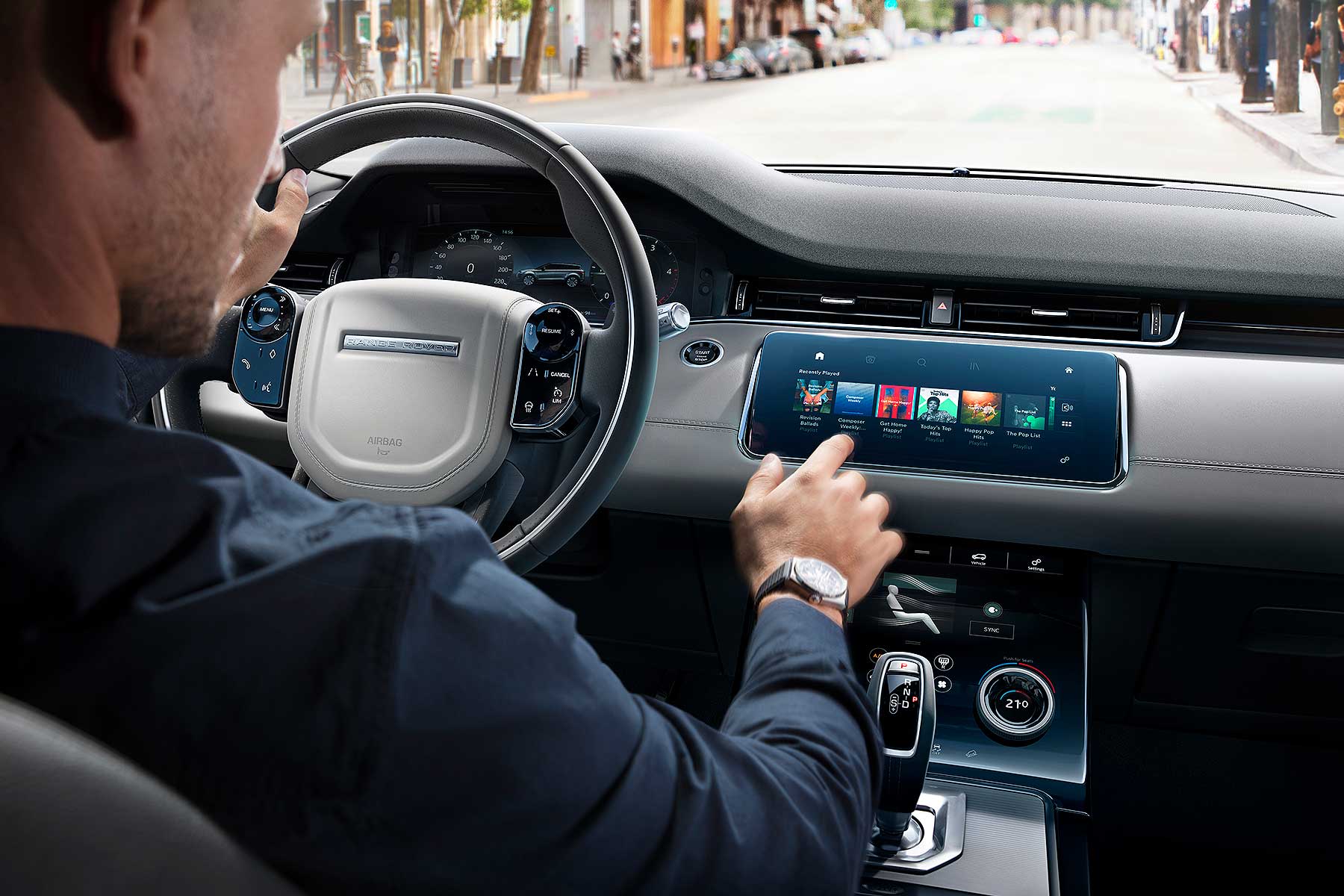 It’s roomier, too. One of the biggest grumbles from current Evoque owners concerns the lack of rear-seat space. All the room created by the longer wheelbase has therefore gone into the rear cabin. The boot is 10 percent bigger (and nearly 200mm wider), benefiting both the young families and golfers who complained before. The panoramic glass roof is also bigger. For the first time, it opens.

Land Rover chief designer for colour and trim Amy Frascella says there are two sustainable fabrics offered in the Evoque. The Kvadrat wool blend with recycled microfibre suedecloth has already been seen in the Velar, and there’s a new Eucalyptus Melange textile, which gives a contemporary, high-tech feel. I

It comprises 30 percent Eucalyptus bark and 70 percent polyester, and the Eucalyptus is sourced from certified forests. “It’s also quick to grow

“Sustainability is a big deal these days. We want to show Evoque buyers they can do the right thing.” 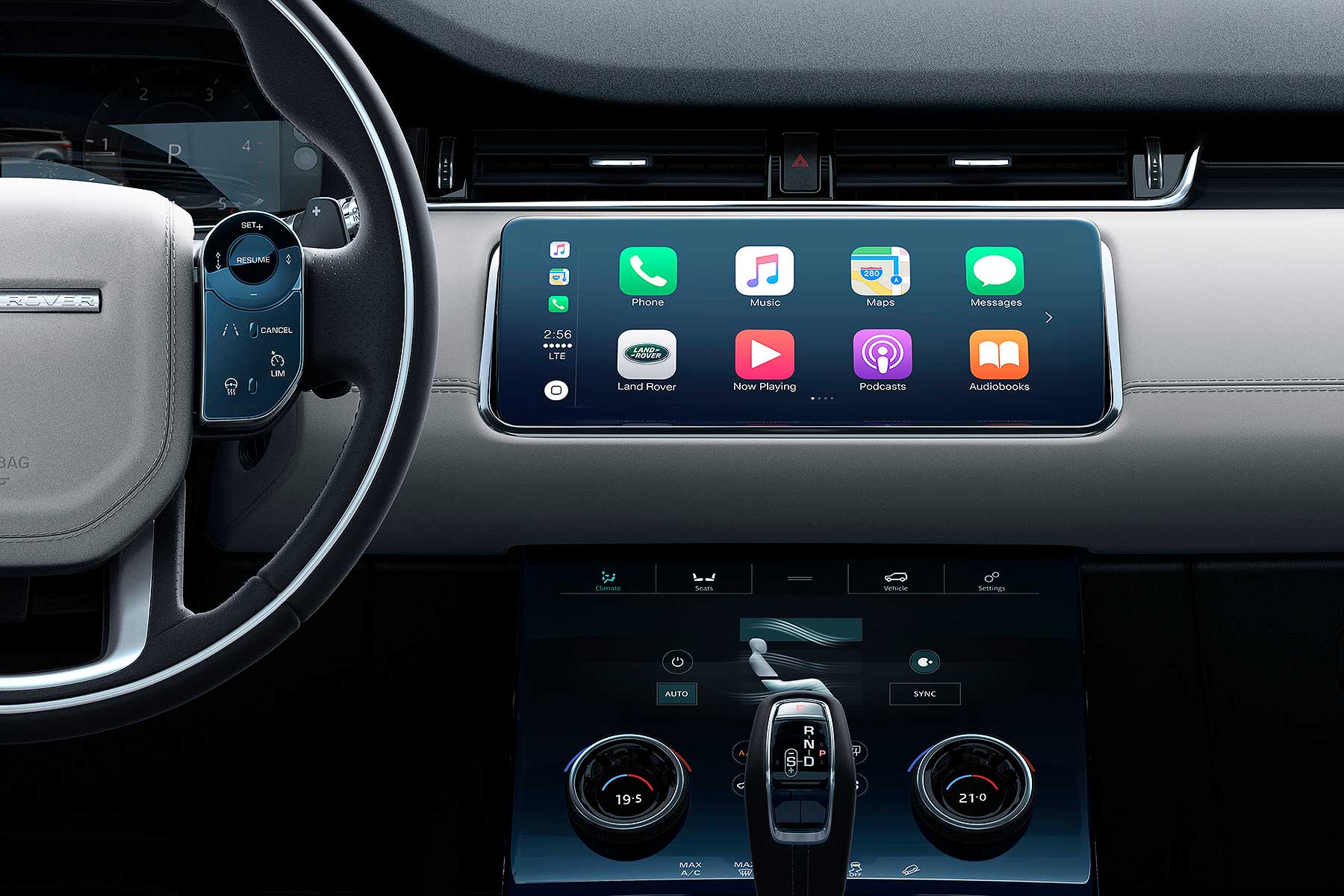 At last, Apple CarPlay and Android Auto feature in the Evoque; they’re standard in every model (and all cars get a widescreen 10-inch Touch Pro screen).

Land Rover is also leading on technology. Ground View effectively makes the bonnet invisible, by projecting camera feeds onto the upper touchscreen. It’s technology Land Rover first showed in concept guise back in 2014. We tested it on the launch, driving along a railway track with pinpoint accuracy: we could see exactly where to place the wheels, and even see a ‘Hello Evoque’ graphic beneat the car. 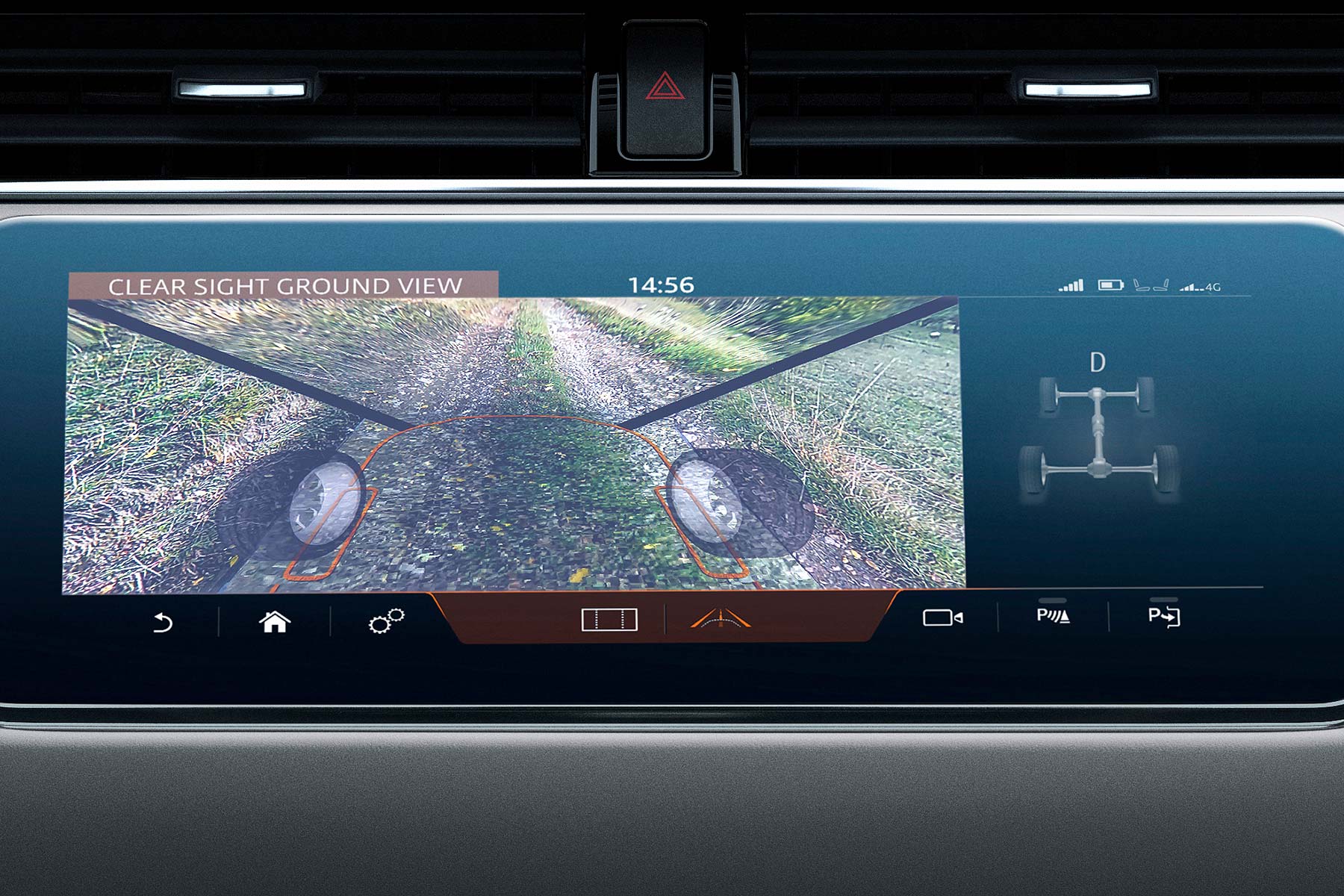 The Clearsight rear view mirror does the same looking backwards. The camera is mounted in the ‘shark fin’ on the roof. It is a 1.7 megapixel camera with HDR and the display itself is three times brighter than a smartphone for clarity.

The new Evoque has ‘Smart Settings’ tech, which uses artificial intelligence (AI) to ‘learn’ driver habits such as favourite seating position, temperature settings and the numbers you most commonly dial at a particular time of day.

Wireless over-the-air updates are built in, like a Tesla, and Incontrol Remote means owners can access it via their smartphone. The climate control system also now has cabin air ionisation functionality, which removes as much city smog as possible. 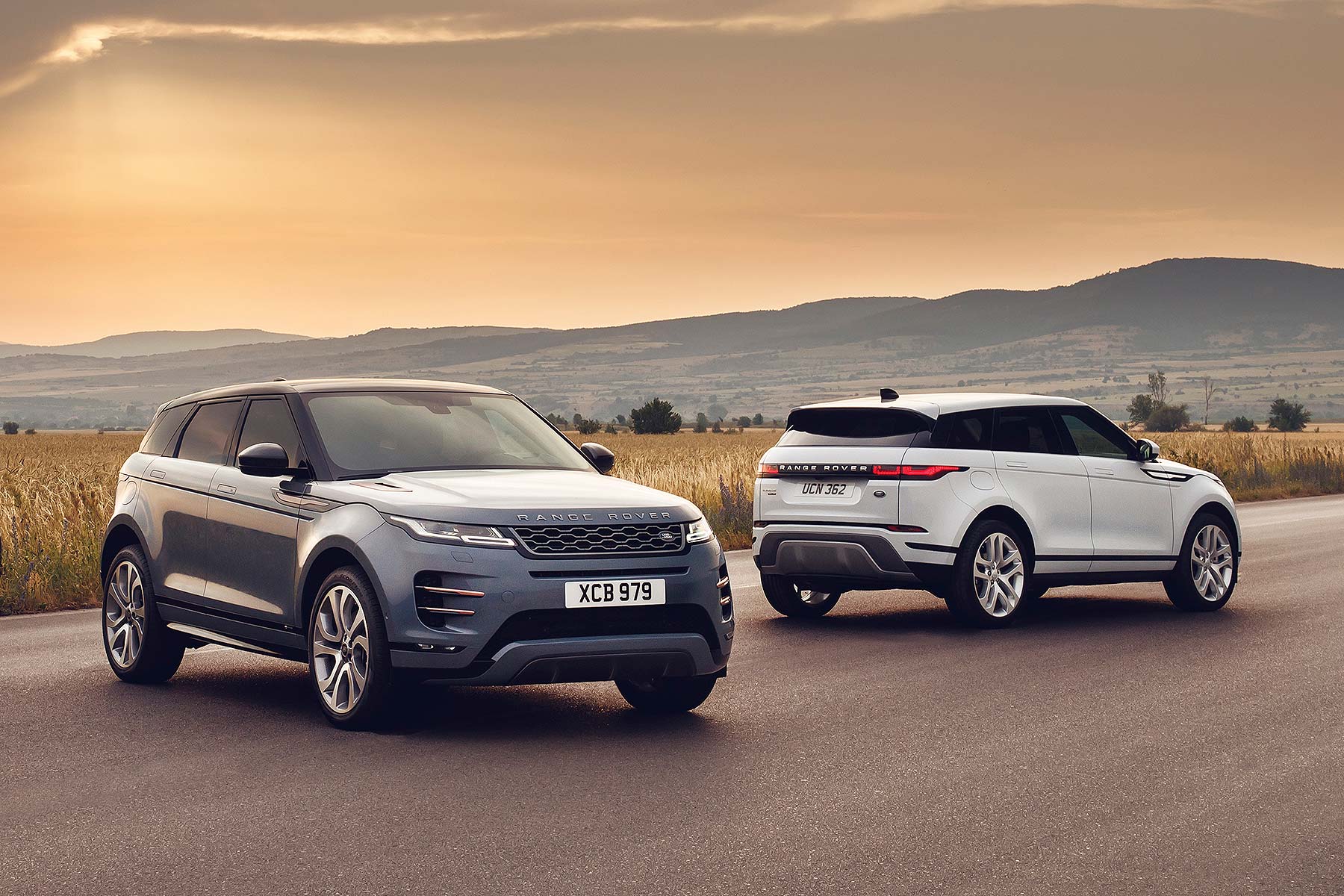 The old car’s rotary gearshifter is no more: all new Evoque get a Jaguar-style pistol-grip shifter. 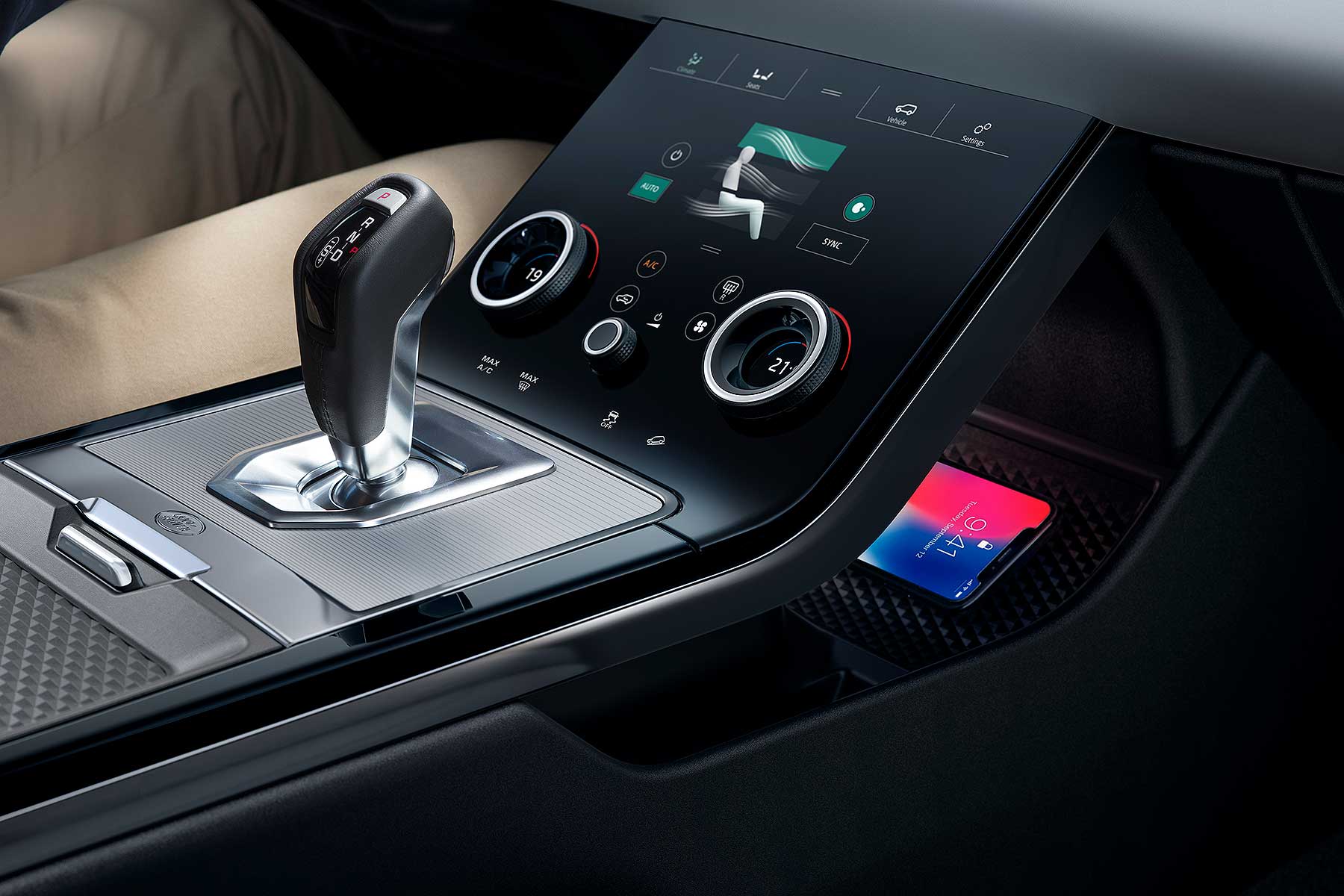 Every model except the front-driver also has the 48V MHEV micro-hybrid system. This is a form of extended stop-start, which increases ‘engine-off’ time in town, and instantly restarts the engine when the driver is ready to go. Land Rover reckons most people won’t notice the engine cutting in and out, and thus will be less likely to disable stop-start entirely.

The MHEV system also delivers an electric ‘boost’ – this fills in the turbo gap when the driver goes on the throttle. It makes the car more seamless and luxurious-feeling to drive, and engineers say it should help give a small fuel economy gain, as there will be less load on the engine.

Fuel economy? The best Evoque emits 149g/km CO2 and the 180hp D180 diesel, which is expected to be the best seller, emits 150g/km CO2 and averages 48.7mpg via the tougher new WLTP fuel economy test. 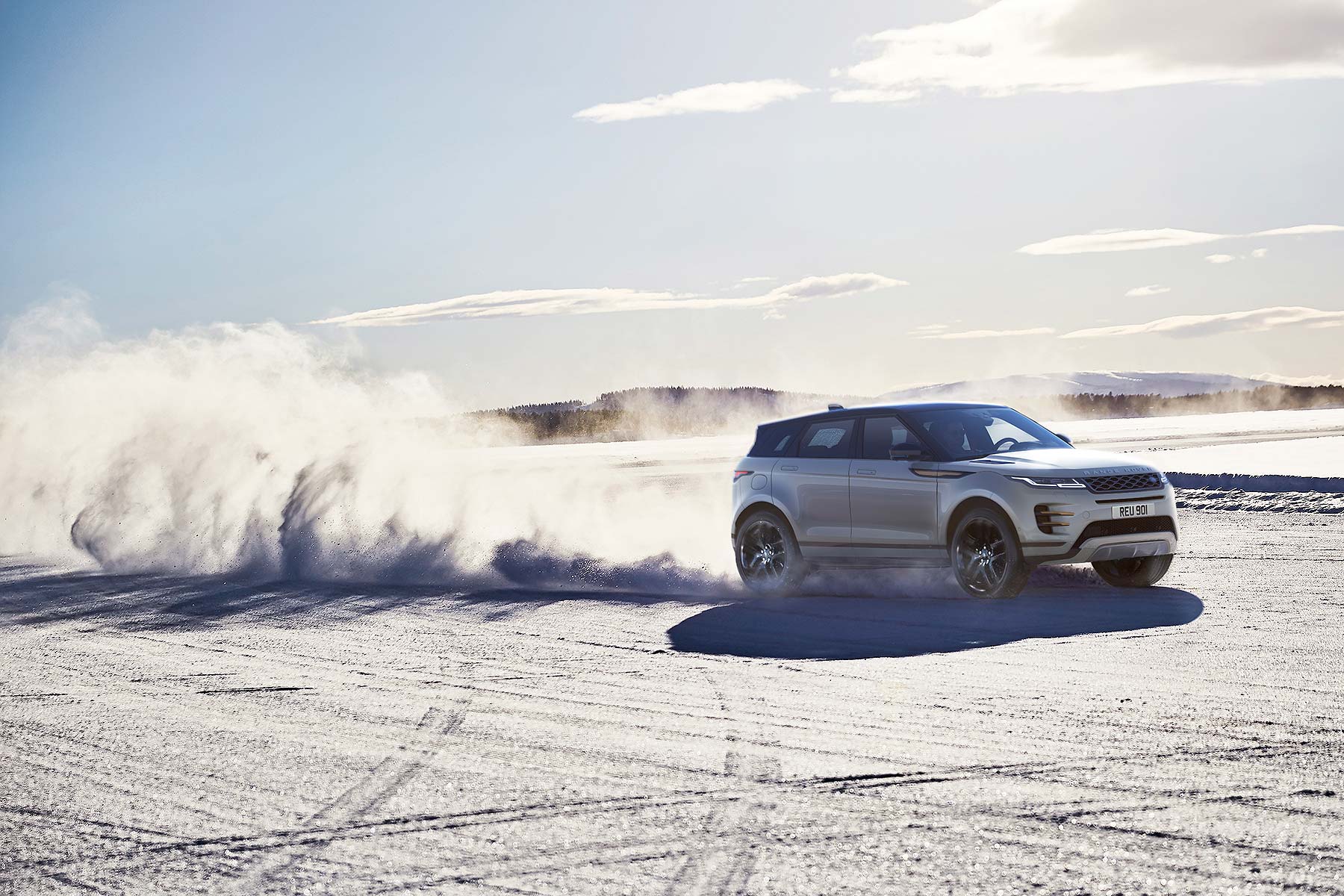 Land Rover teased details of the new Range Rover Evoque plug-in hybrid, which is expected to go on sale in a year’s time. It will use a 1.5-litre three-cylinder turbo petrol engine paired with a 30kW starter-generator electric motor. Power will be provided from an 11.3kWh lithium ion battery.

The Evoque plug-in hybrid will have intelligent all-wheel drive; the engine drives the front wheels and the electric motor drives the rears. It can run in petrol-only, electric-only or a combination of both. Total power output is 200hp.

Because the new architecture has been designed so it’s hybrid-ready, there’s no compromise on interior space, as the batteries and motor are fully integrated into the bodyshell.

Land Rover isn’t ready to tell us fuel economy or CO2 yet, though – nor how long its electric-only range will be. That’s news for next year, it says… 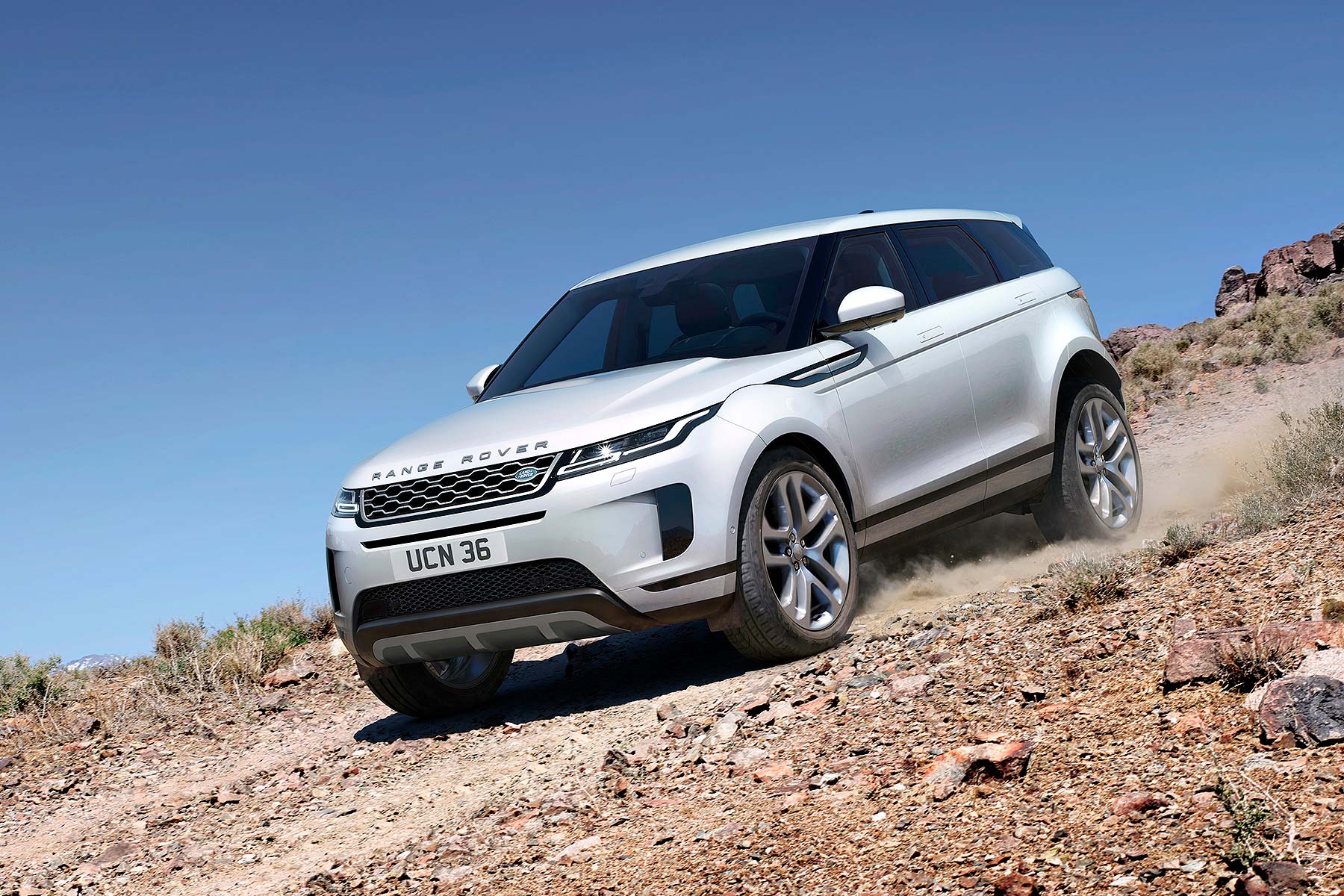 A Land Rover’s not a Land Rover if it can’t off road better than anything in its class. The Range Rover Evoque will stand out from its myriad rivals by being the king of the mud (and, with 100mm of wading depth meaning it can now drive through 0.6 metres of water, king of the river too). Wade Sensing is optional and can tell how deep the water up ahead is before you drive into it. 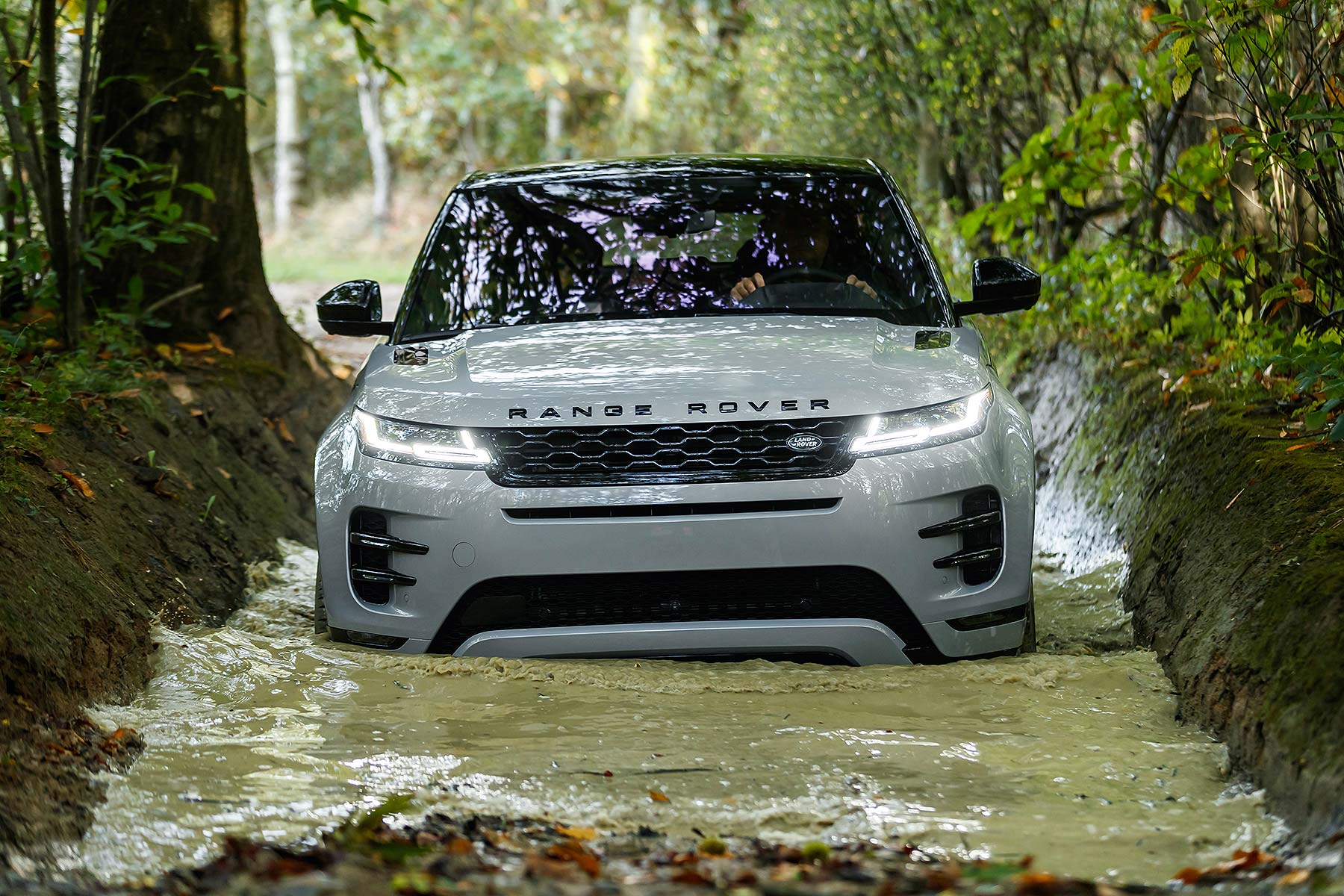 It has 212mm of ground clearance, Land Rover’s clever ‘surface-sensing’ Terrain Response 2, and Active Driveline which precisely distributes drive between all four wheels. Driveline Disconnect means that although most are all-wheel drive, the rear wheels can be disconnected automatically on straight roads to lessen drag and improve economy.

Every new Evoque also features Hill Descent Control, All Terrain Progress Control (Land Rover’s novel off-road cruise control), Low Traction Launch (to maximise pull-away grip when it’s slippery) and Hill Launch Assist that will stop you rolling back when driving up the side of a mountain. 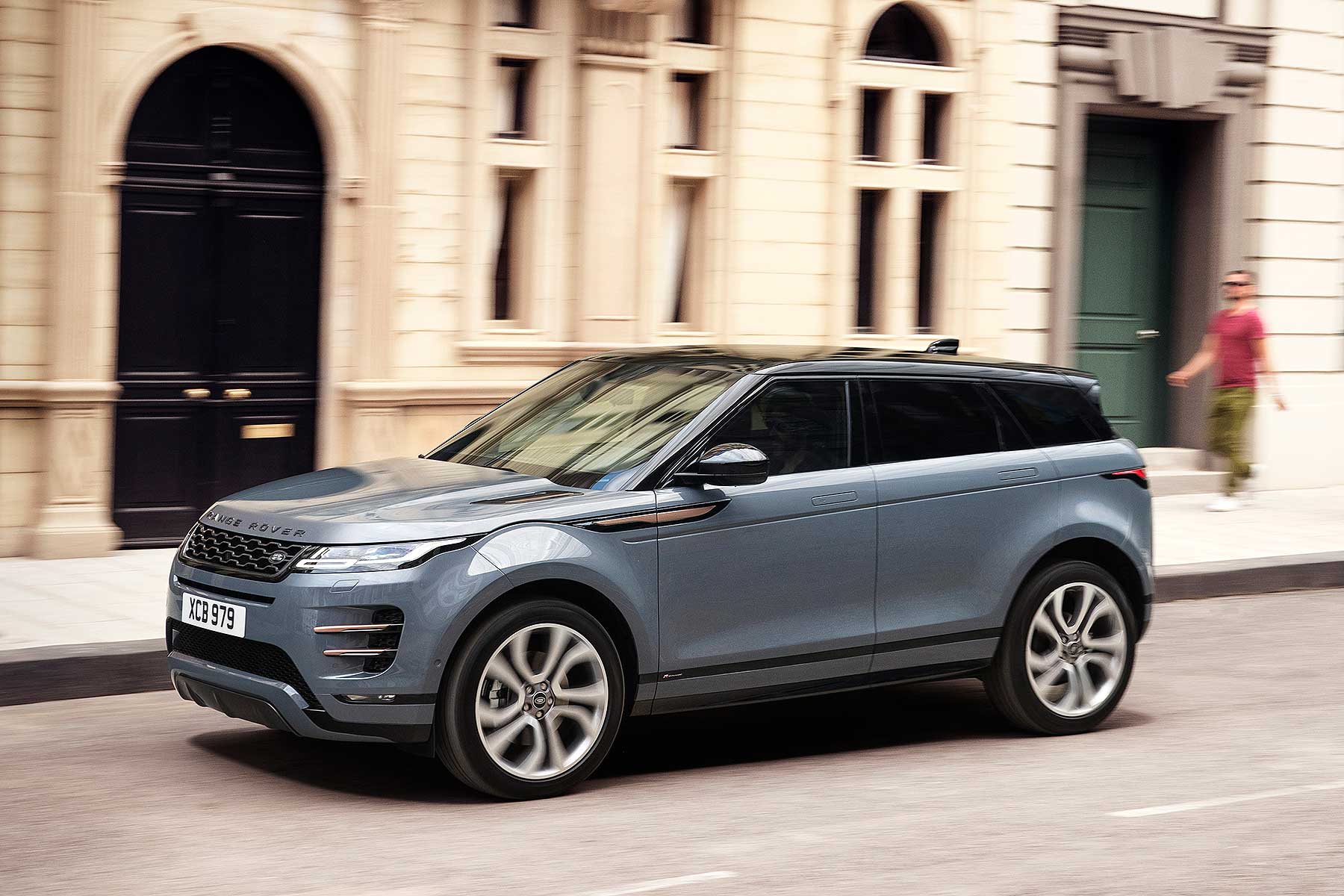 We were given an excusive preview of the new Range Rover Evoque, with a briefing by Gerry McGovern himself. As the covers were pulled off, what emerged was… clearly an Evoque. There are no big surprises here, certainly not at first glance.

The surprises will come when you spend time with it. It’s clearly a much higher quality machine for starters, with a far more premium appearance. It will now sit perfectly happily along the full-size, £100,000 Range Rover. There’s no discernible difference in quality.

Land Rover has sweated on the details, narrowing the panel gaps, decluttering the design and giving the surfaces a rich, lush appearance. With some clever new metallic colours (a ‘solid metallic’ called Nolita Grey that changes appearance three ways, anyone?), it will ooze showroom lustre. 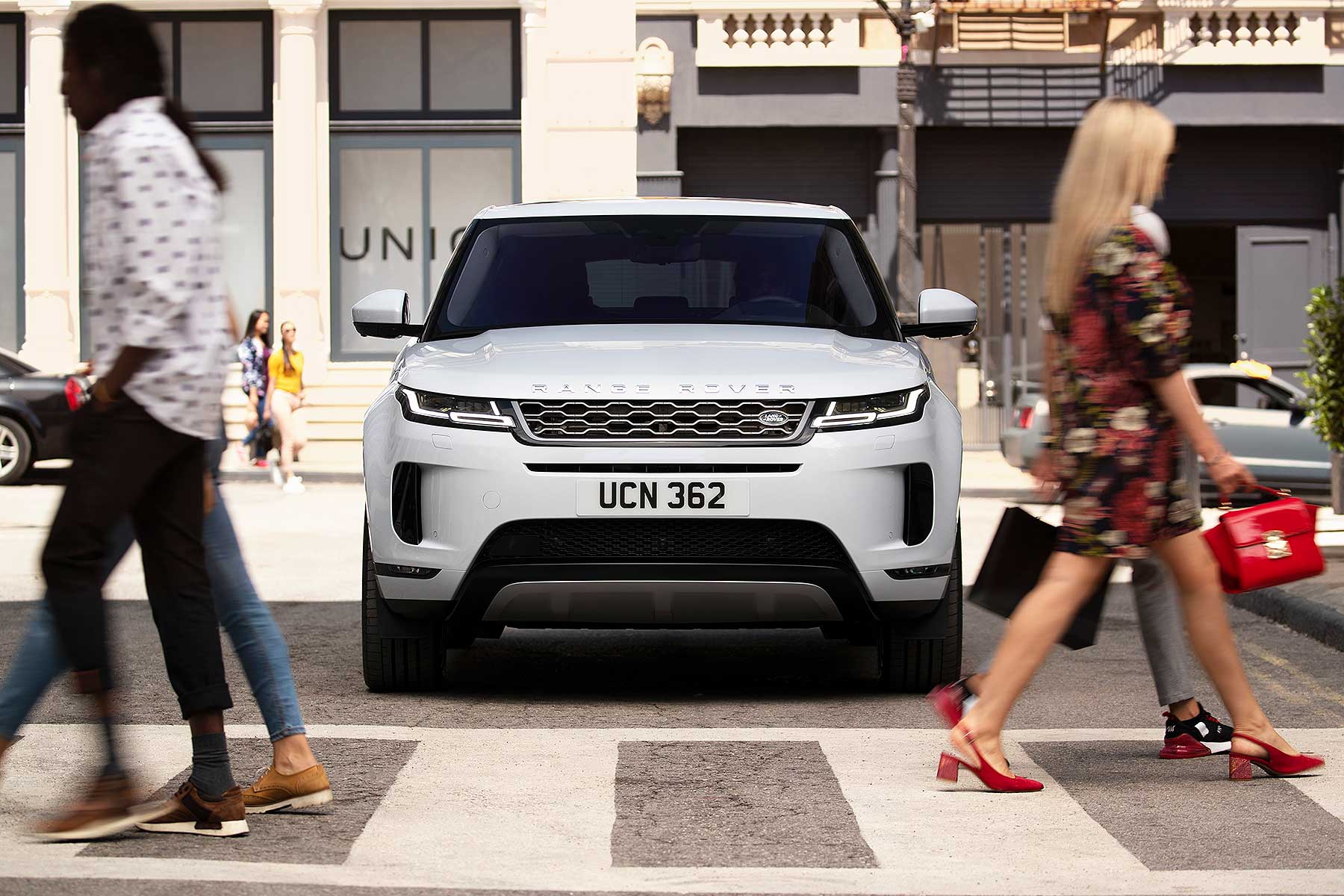 The interior is a massive step on. It feels more upmarket and is much nicer to look at. High-definition, black-panel infotainment displays are consumer electronics quality, and the materials have, in places, watch-like detailing. Land Rover poached an interior designer from Bentley to make the new Evoque feel like a luxury product. It shows.

We even got behind the wheel for a brief drive. You can’t tell much from these things, of course, but the more open-plan interior felt roomier and more airy. The engine didn’t vibrate like the current diesel Evoque does, and it seems a lot quieter in there. 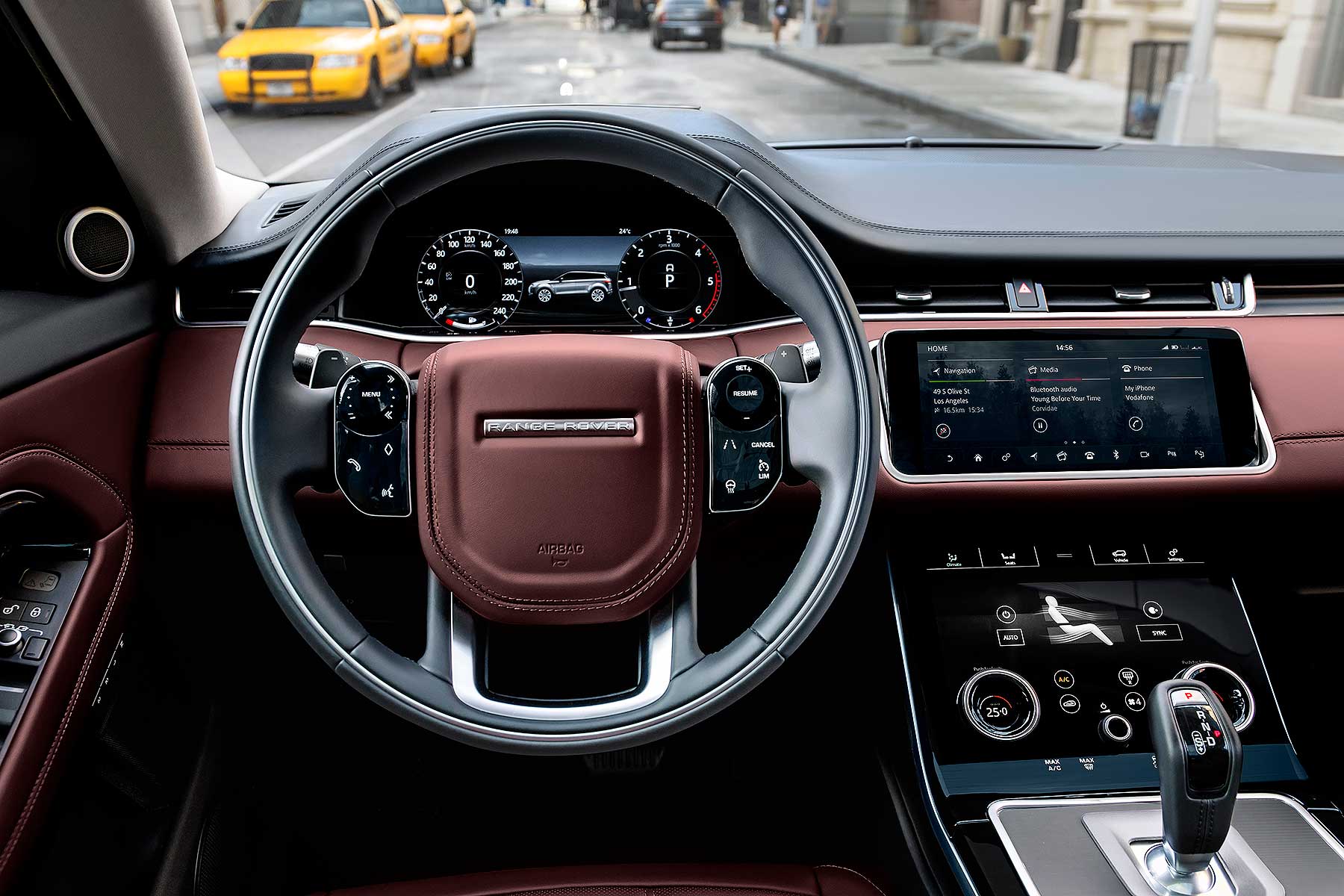 The objective was to show off the ClearSight gadgetry, and the Evoque’s obstacle course-crossing ability. We barely got above 5mph, but did prove its genuine Land Rover credentials.

More driving will reveal more. But we already think it’s safe bet to say the new Evoque might well have one of the nicest interiors in the small premium SUV sector…