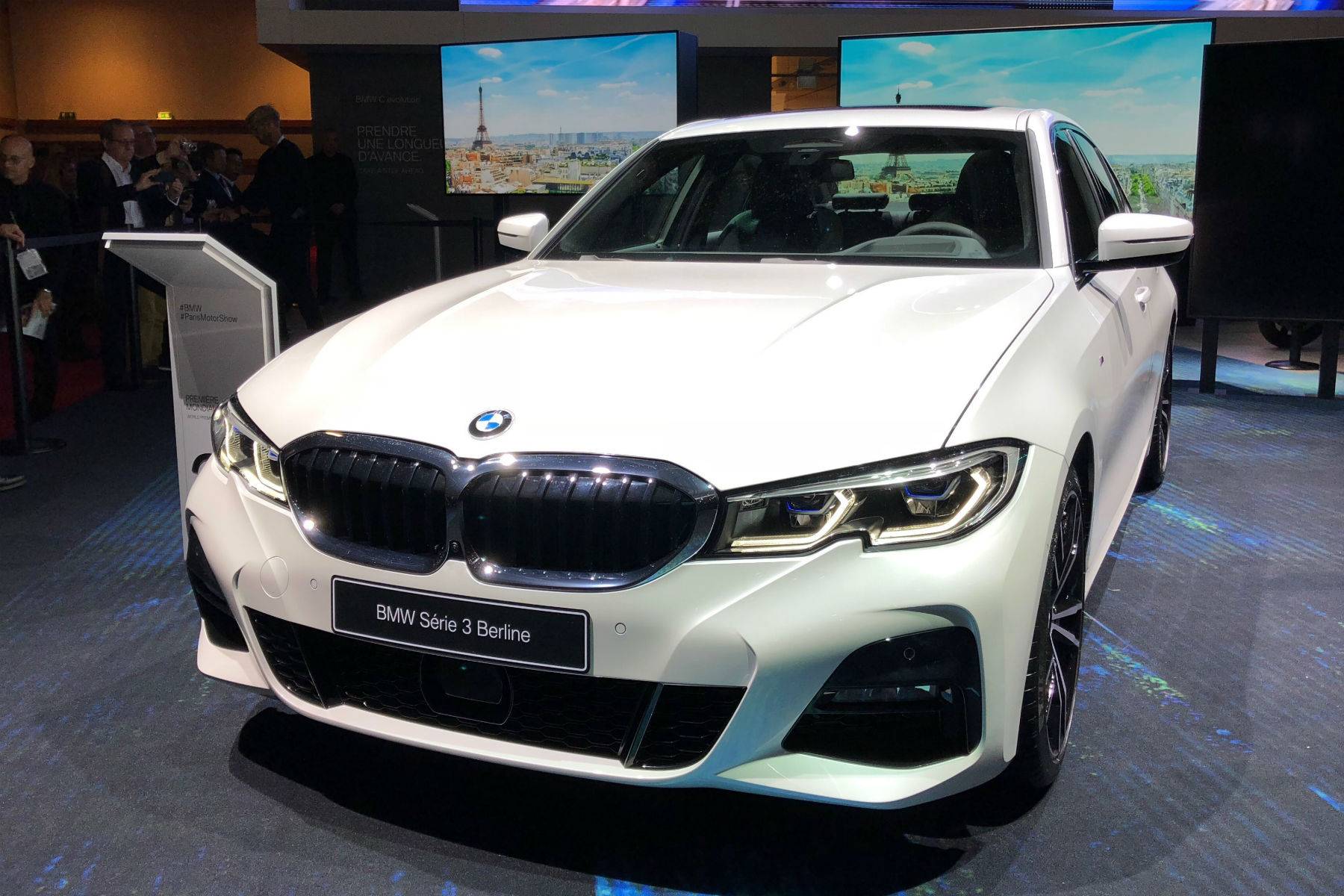 The new 2019 BMW 3 Series marks a giant stride forwards for one of BMW’s most important model lines. It’s easy for brands to play it safe in this sector – witness the latest Audi A4. But then look at the meek market reaction to the A4, and Audi’s subsequent struggle for sales.

This, surely, has emboldened BMW with the new 3 Series. So here it is, the seventh-generation 3, the most stylistically different from its predecessor since the futuristic E36 version back in 1990. It’s the undeniable highlight of the 2018 Paris Motor Show. 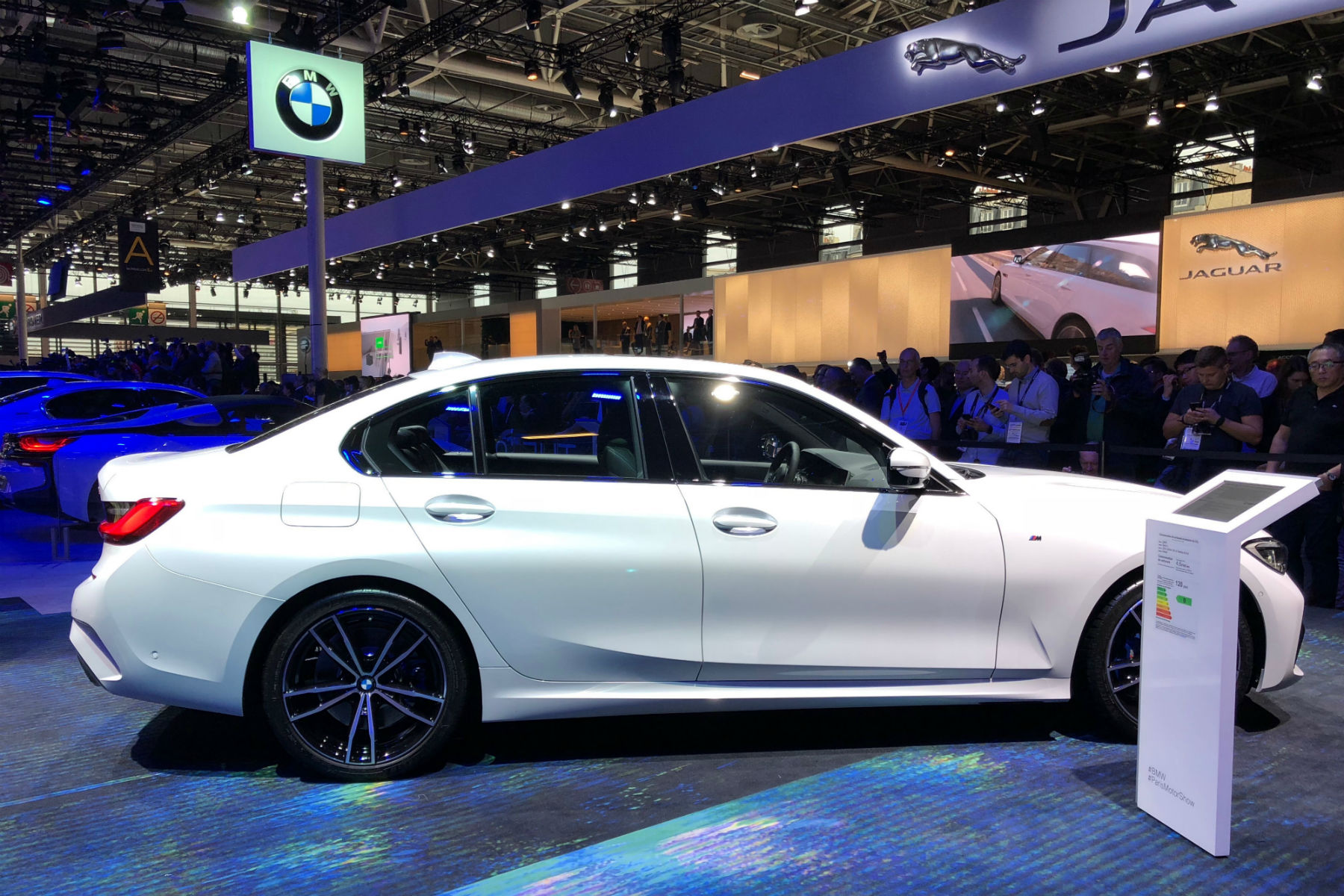 We’ll see it first as a petrol 330i and diesel 320d. Both will be four-cylinder turbos, and BMW will quickly follow them up with a 330e iPerformance plug-in hybrid. Six-cylinder performance versions? They’ll come, but they’re not the big news at launch. The rest of the 3 Series is. And it’s quite the story to tell. 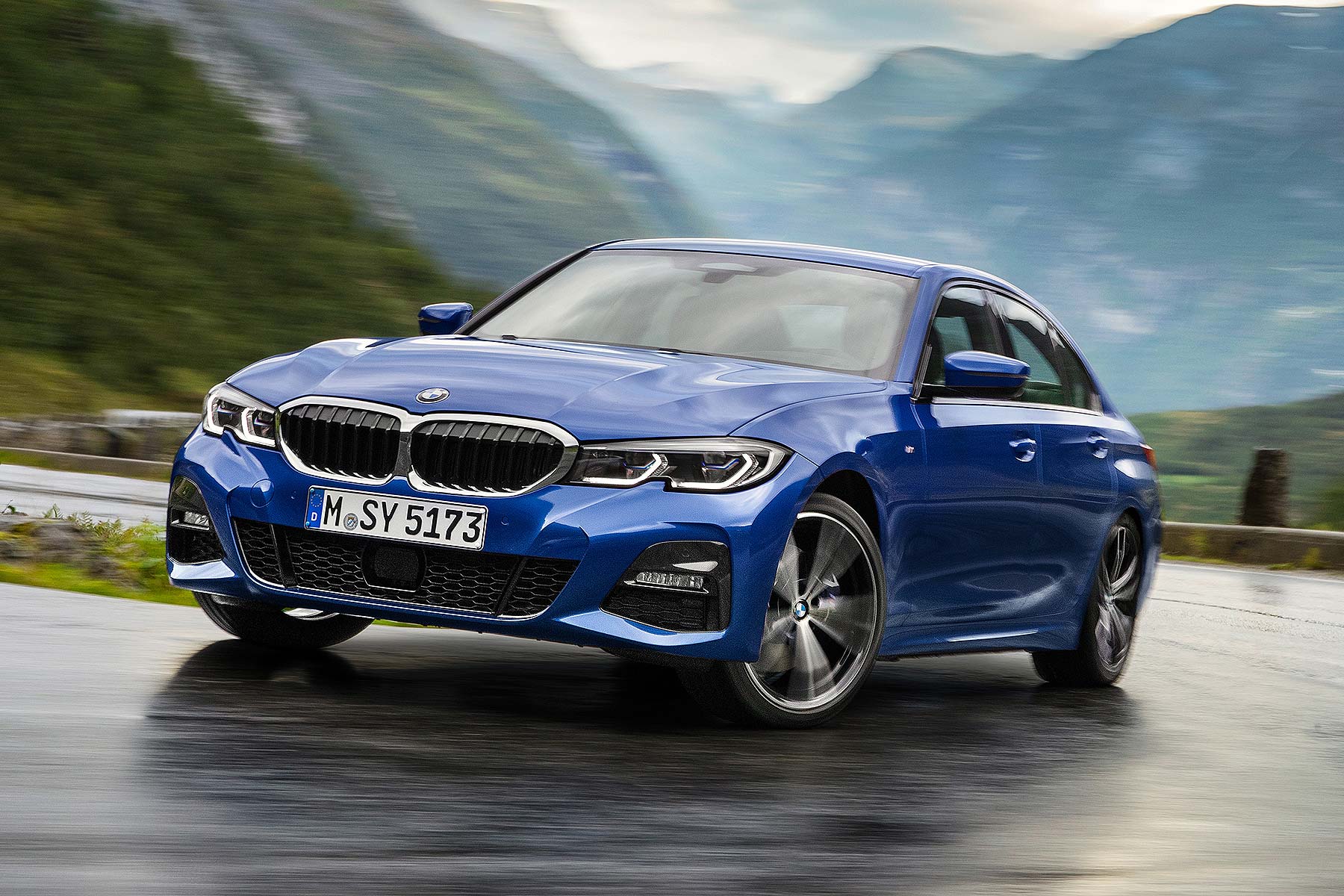 Creases and contour lines dominate the appearance. This is brave stuff, for a 3 Series. The front has an entirely new look, with a broad BMW kidney grille and intricately shaped headlights. Four contour lines on the bonnet feed into them, and the bonnet itself sits neatly flush with the lights and kidneys.

BMW is proud of the intakes for the aero-aiding Air Curtains on SE and Sport models, because they use a NACA design for the intakes, something more commonly seen on retro racing cars. 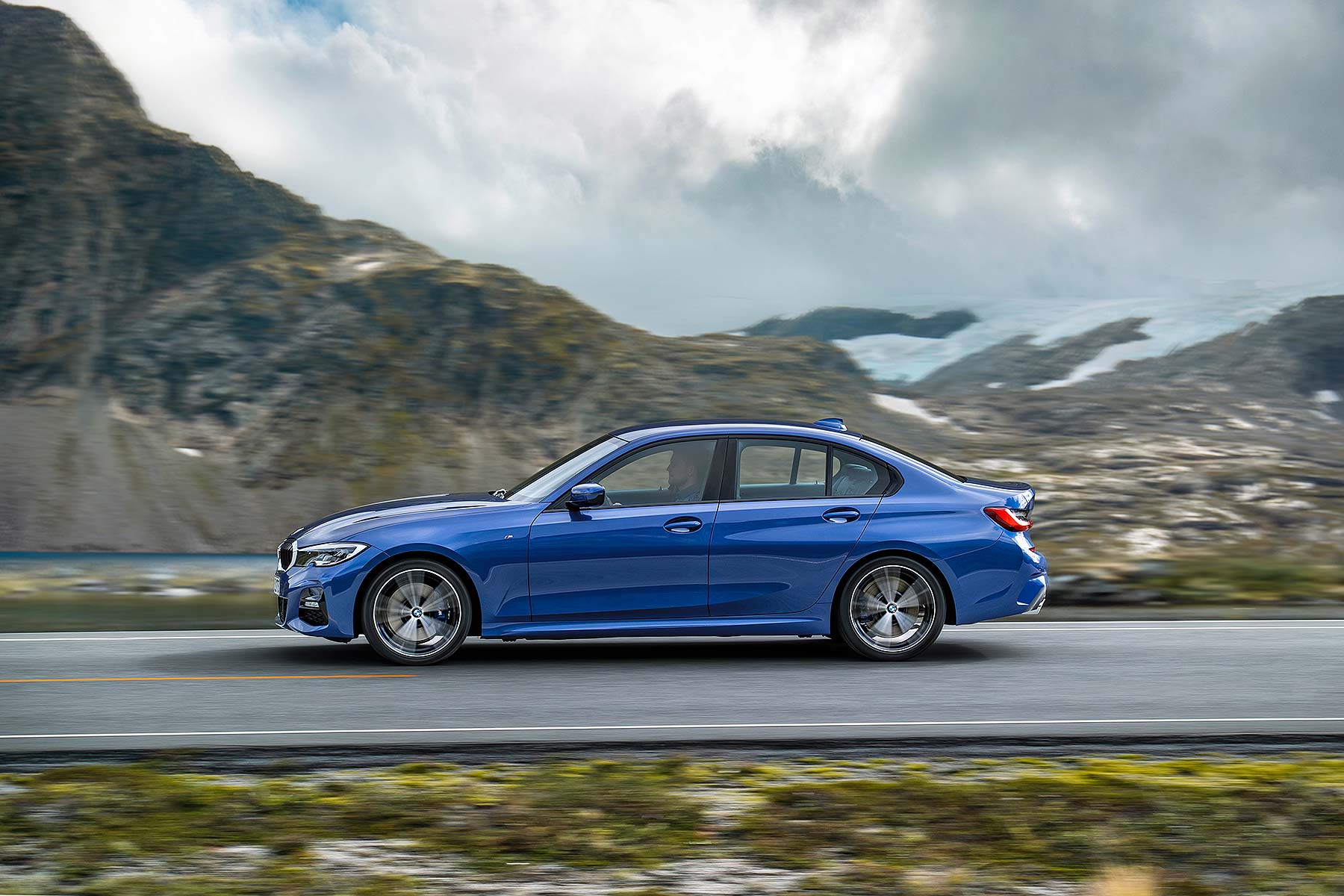 There’s a lot of design detail on the side profile, such as strong lines around the rear door handle and a bold lower contour that BMW says emphasises the rear wheelarches. The designers have also integrated the BMW ‘Hofmeister kink’ into the C-pillar, so the rear doors have a freestanding glass edge. And you thought simple frameless windows were cool… 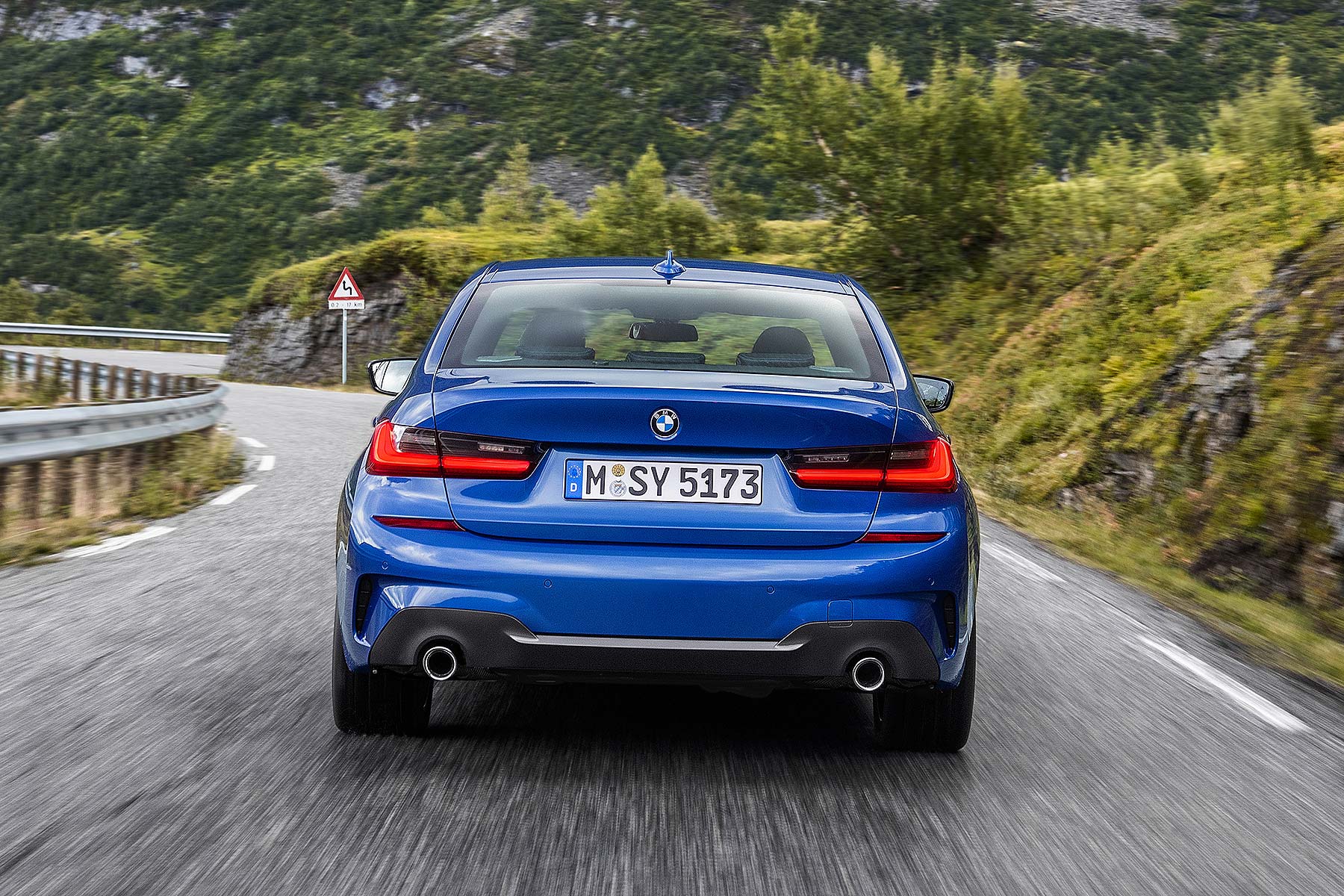 Recent 3 Series rear ends have been forgettable, but the new model has a pronounced boot lid spoiler lip and dark-tinted L-shaped tail lamps. It’s slipperier through the air, too: the Cd drops from 0.26 to 0.23. 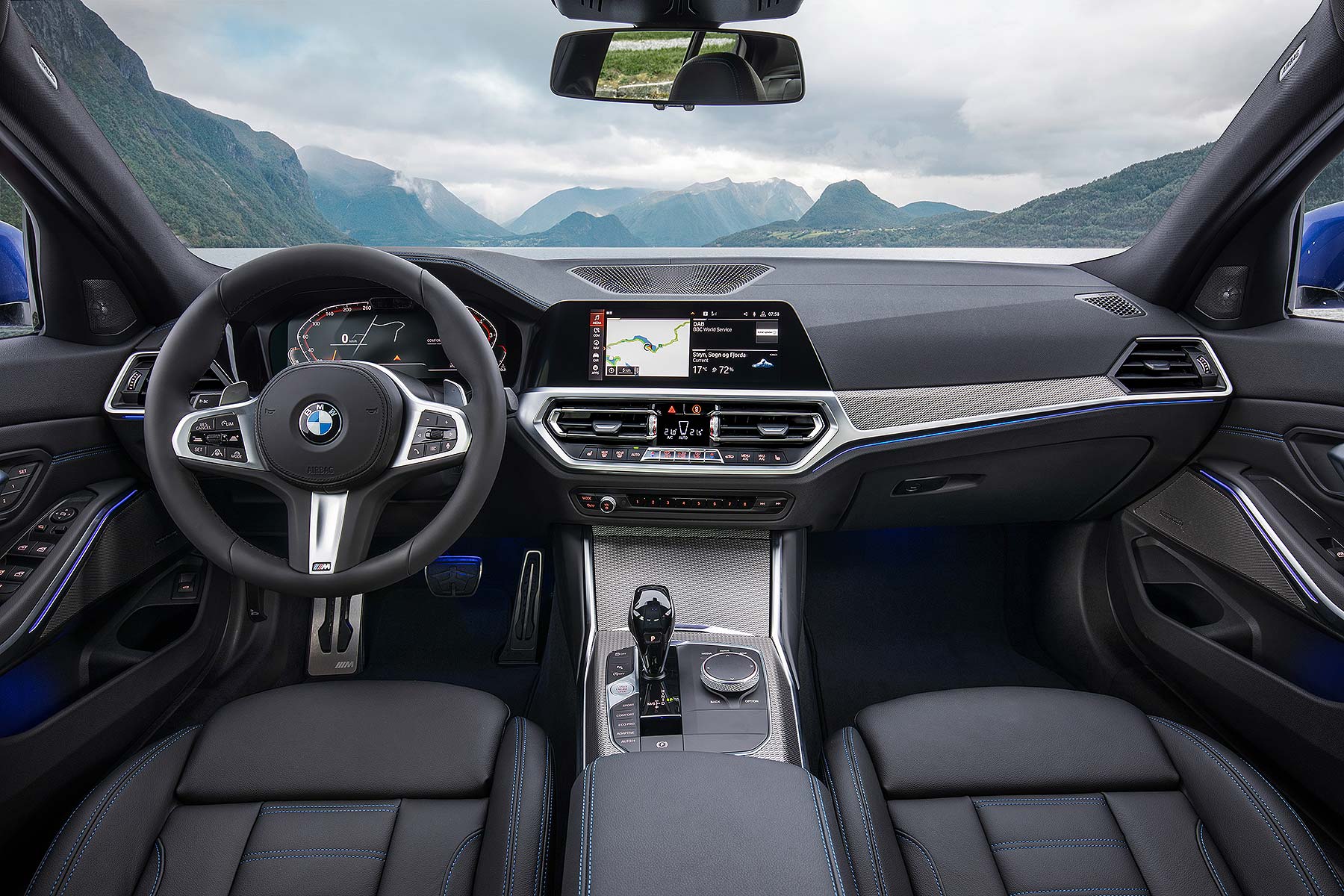 BMW has rewarded loyal 3 Series customers who’ve had to put up with the humdrum, forgettable interior of the current car with nothing short of a revolution. Everything cool that’s been admired in umpteen 8 Series concept cars is in evidence here, from the all-new BMW Cockpit infotainment display to the intricate heater controls first seen on the new BMW Z4. 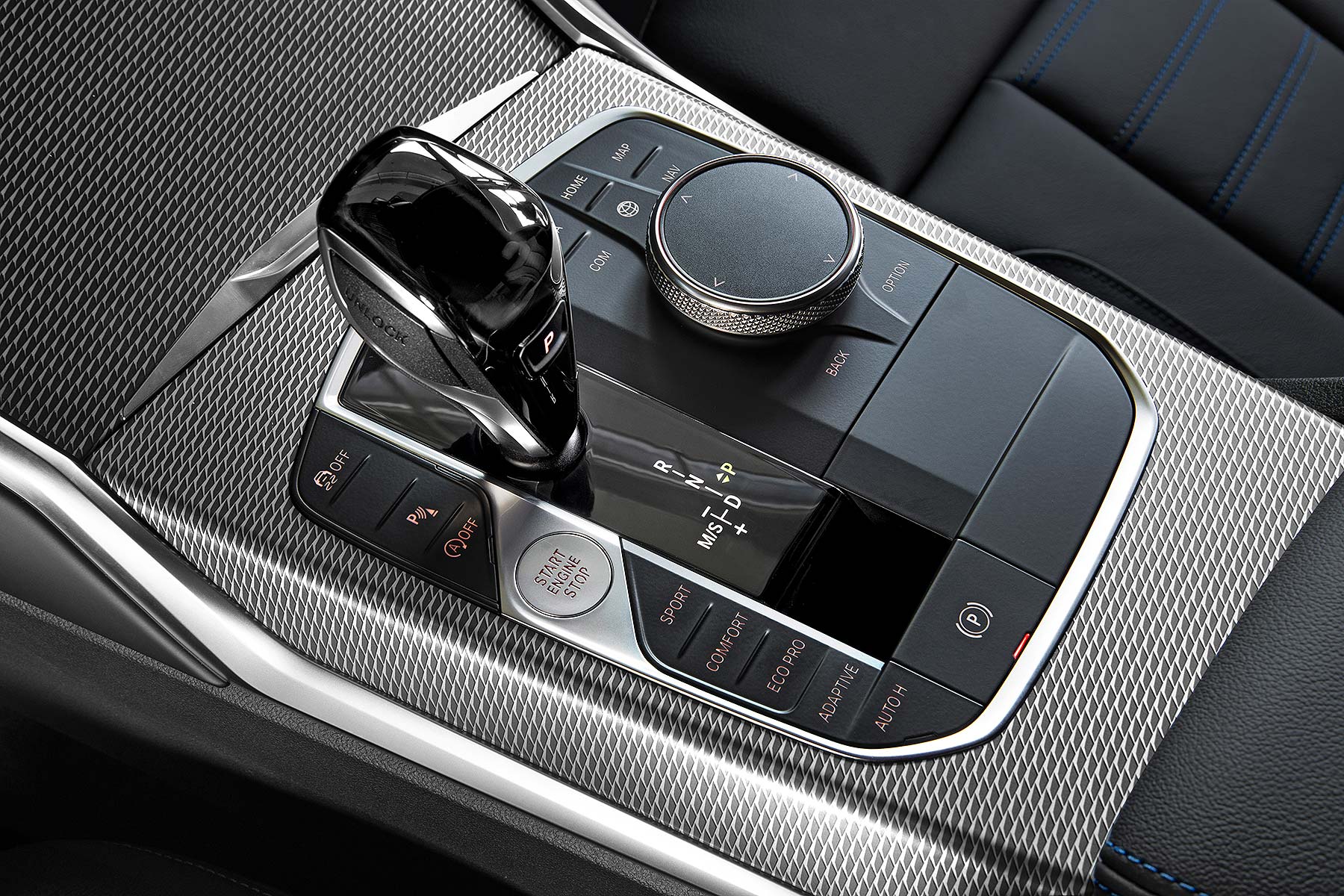 The design and layout is driver-focused and all-new trim materials are available, including open pore wood and mesh-effect aluminium. Electroplated trim strips add a quality feel, while BMW’s at last moved the starter button to a more convenient location next to the gearlever. 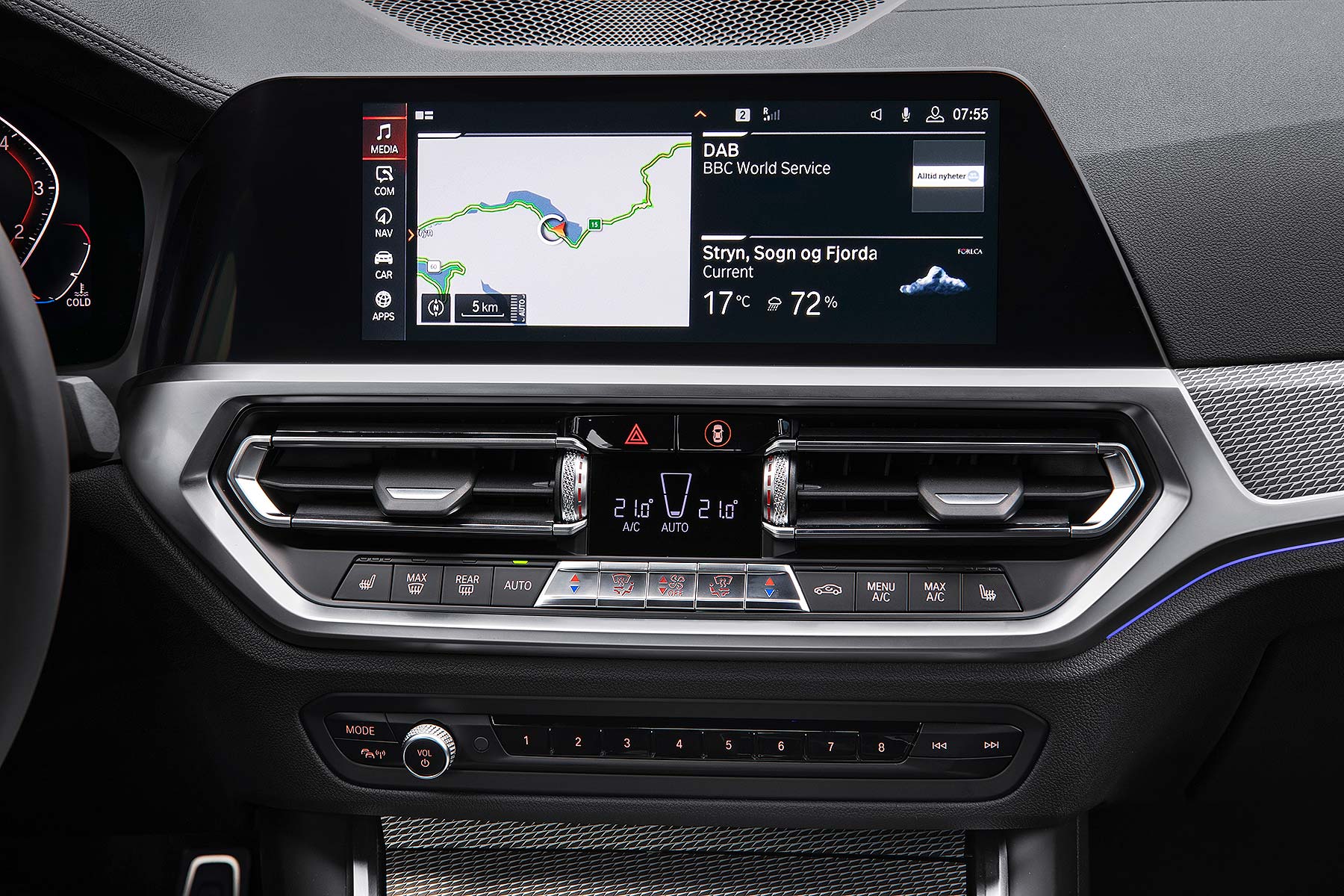 The BMW Intelligent Personal Assistant comes to the new 3 Series. We’ve explained what this does separately, and it means new 3 Series owners will be able to speak with their cars by saying ‘Hey BMW’, if they so wish.

It’s bigger all round, with more shoulder room in the front, more legroom in the rear and more space between the front and rear seats. It’s easier to get in and out, and all-round improvements to seat comfort will impress high-mileage users. A 480-litre boot is enhanced by 36 litres of oddment stowage. 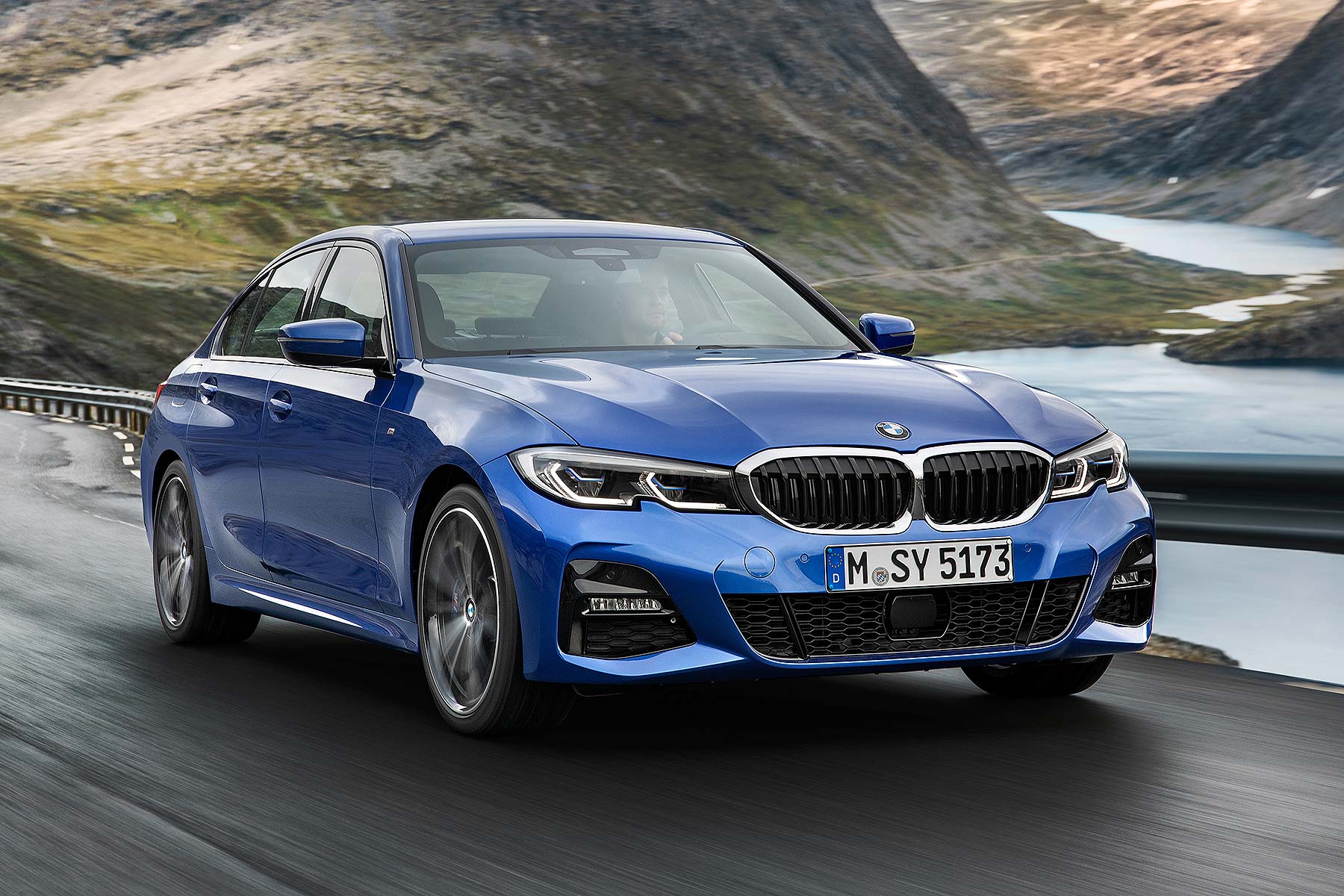 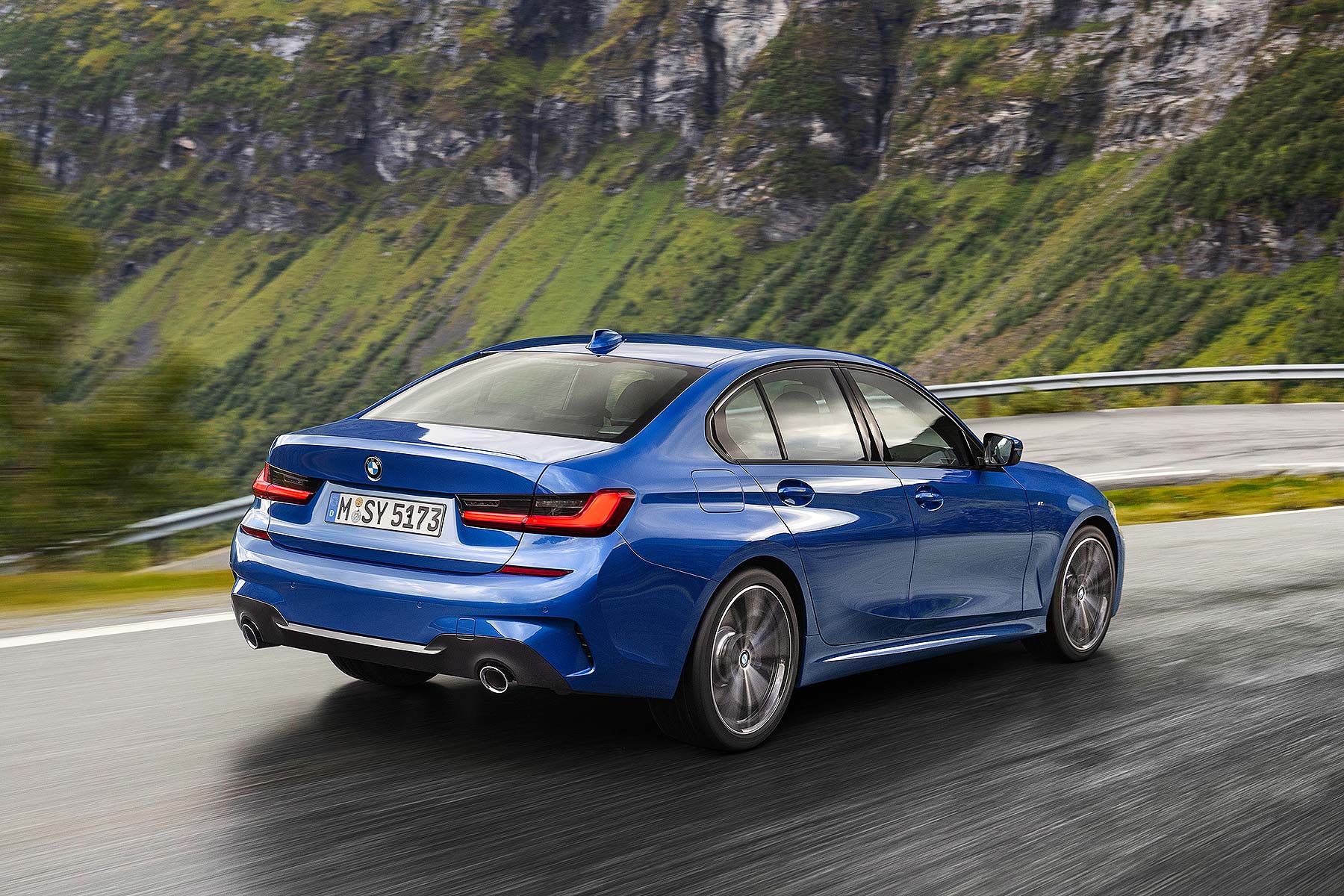 Suspension is overhauled, to take advantage of a 25 percent stiffer bodyshell (it’s 50 percent stiffer in key areas). Clever lift-related dampers are standard and spring rates are 20 percent firmer for a sportier drive. M Sport models have more focused suspension as standard, with a 10mm lower ride height; Adaptive M suspension with variable modes is an option.

The 330i M Sport has unique lightweight brakes, with aluminium centres and grey cast iron discs – spot them by their blue calipers. They are optional on the diesels as part of an M Sport Plus package, as is an M Sport differential.

Because it’s ready to go on sale, BMW can tell us what each trim variant gets as standard. Here are some of the highlights in the kit lists over today’s cars.

All cars have a standard 100-watt stereo with an optional 16-speaker 464-watt Harman Kardon surround-sound system available as an option.

There are 10 metallic colours, with one of them, Portimao Blue, reserved for M Sport models. Two non-metallic shades are offered. 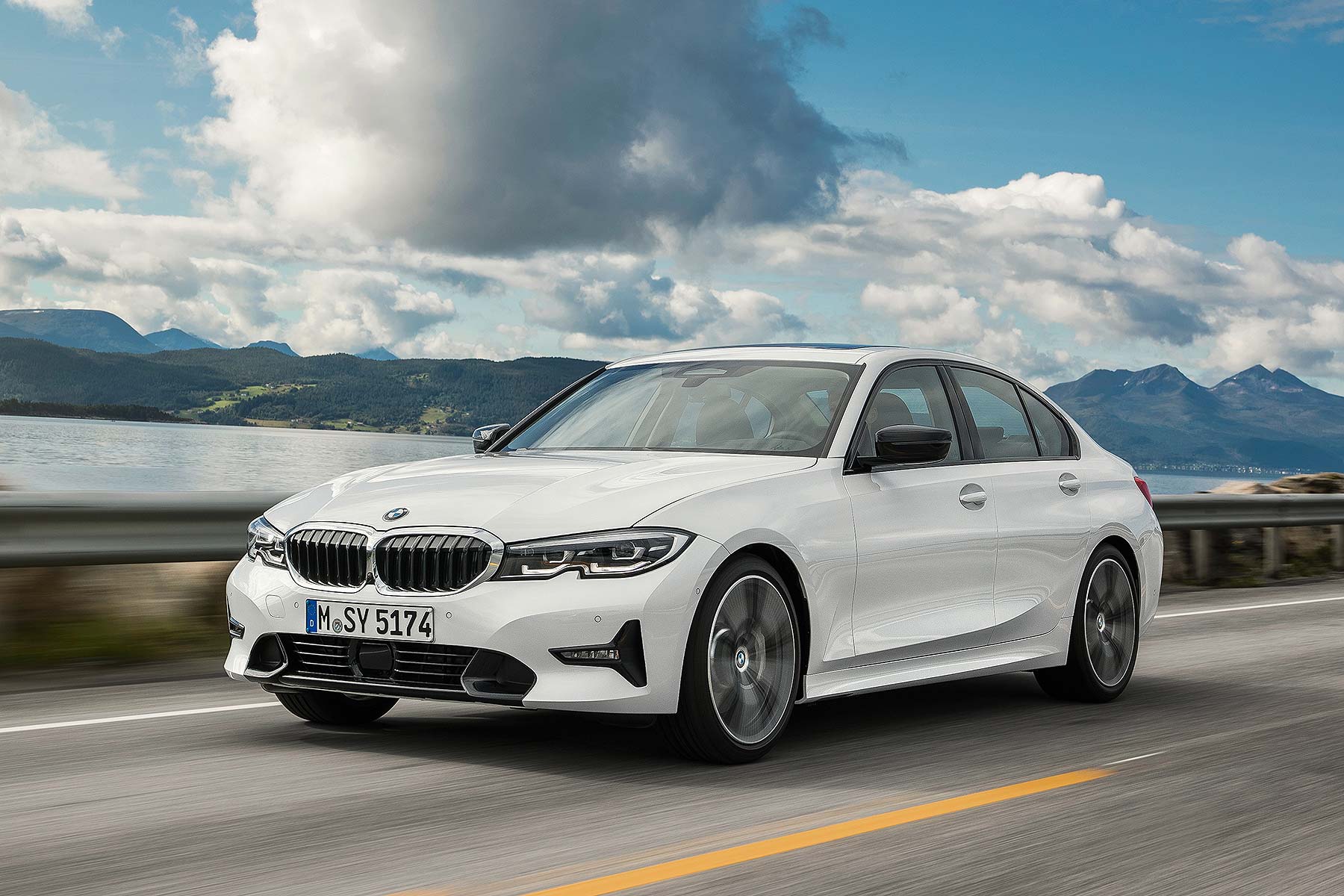