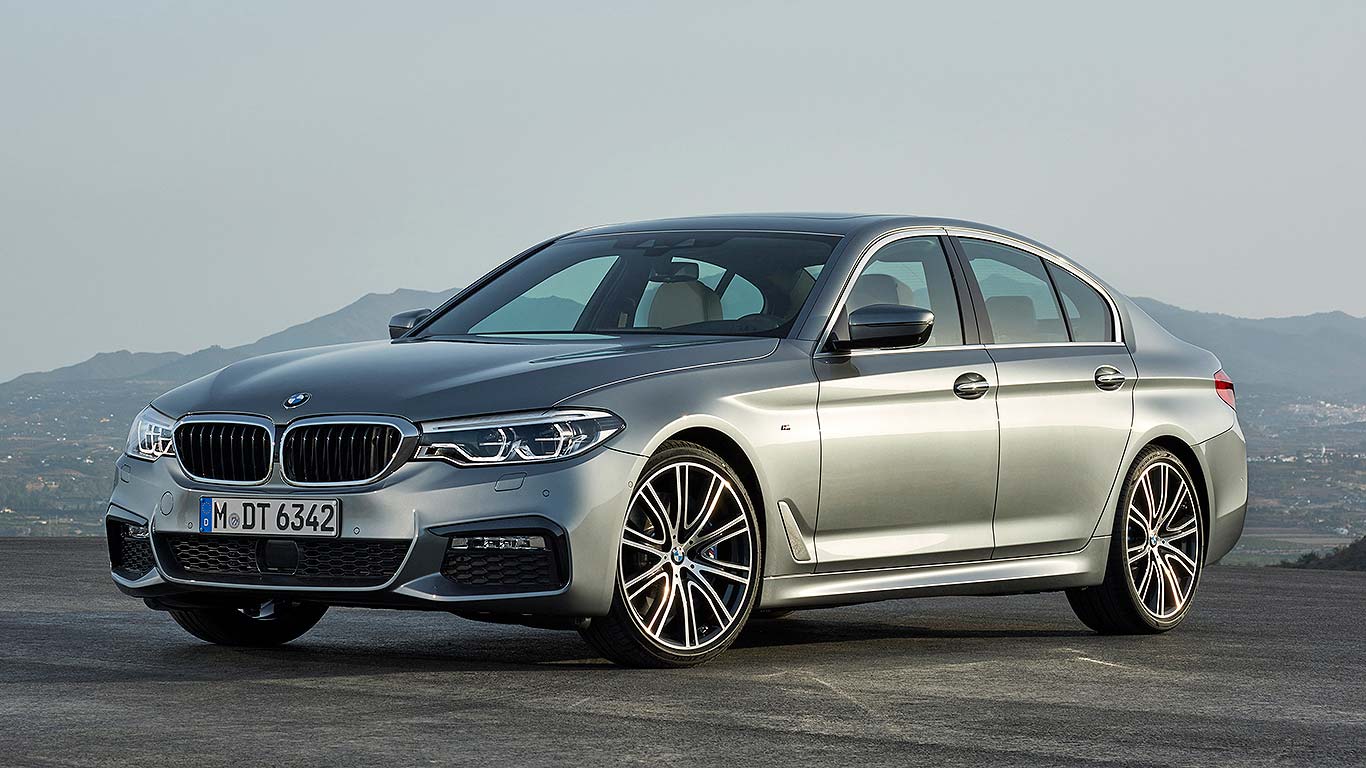 BMW has revealed the all-new 2017 5 Series, a car that packs a serious amount of 7 Series-inspired technology beneath its evolutionary lines.

The styling may not seem to break any boundaries, but BMW is using onboard tech to revolutionise its rival to the Mercedes-Benz E-Class – and it will even partly drive itself. On sale next February, the new 2017 BMW 5 Series really is the most advanced 5 ever. Taking ownership of that fancy touchscreen smart key will be a quite a thrill. Here’s why. 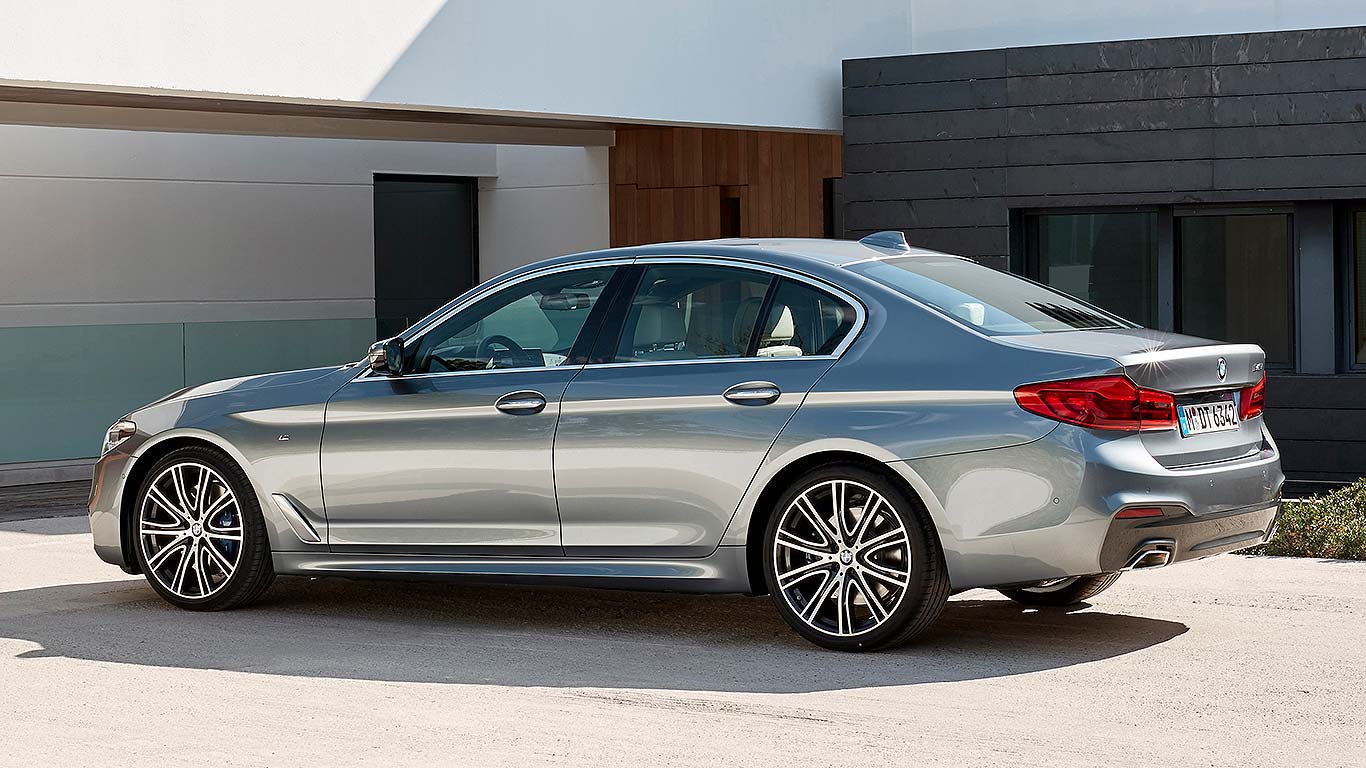 Put the old 5 Series alongside the current one, and the similarities are clear. This is BMW’s most profitable car and it’s not about to upset the applecart with quirky looks. What’s new are the crisper, sharper creases and broader, slimmer rear end, both aping the more modern features of the 7 Series luxury car. 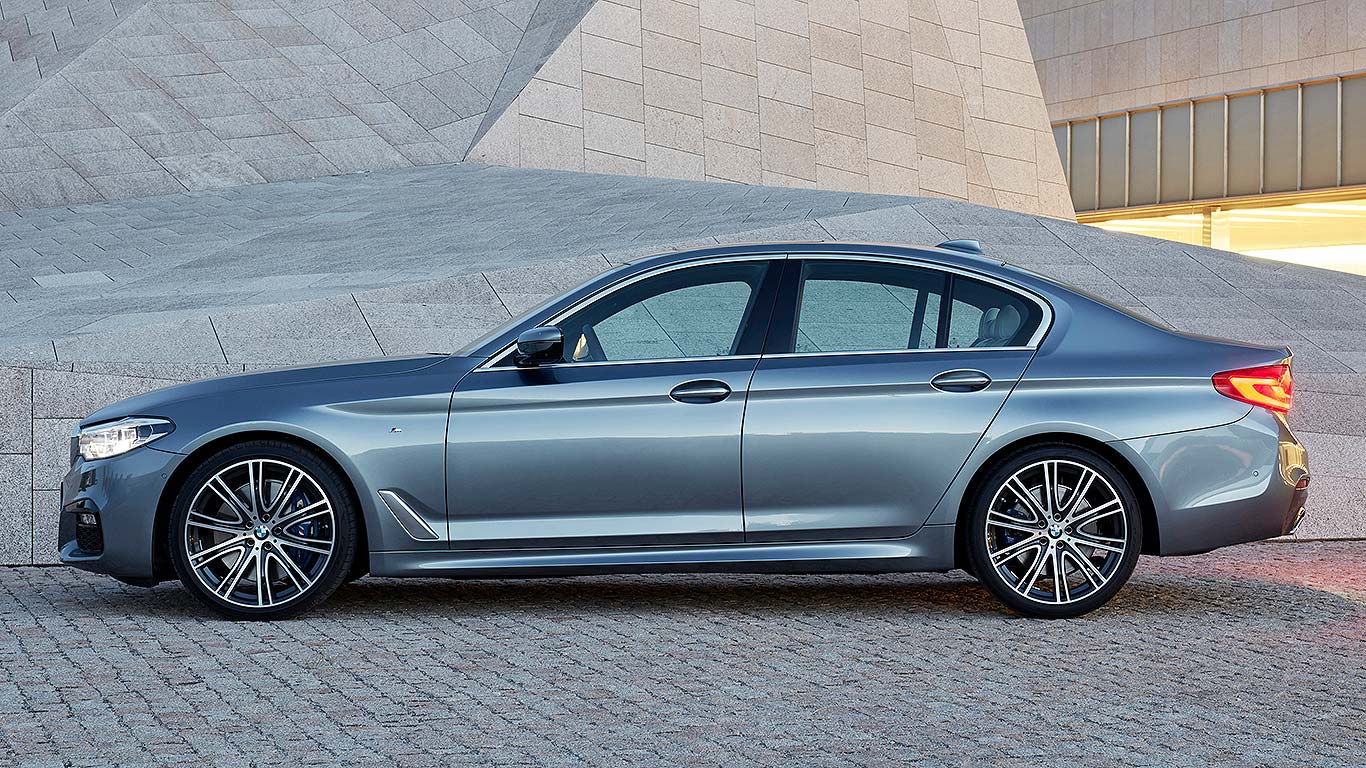 BMW’s proud of the proportions of the new 5. The front end is long, with the cockpit set back and the rear end is relatively pert. This gives a sleek, sporty look in profile. Also note the racier roofline that’s surprisingly coupe-influenced for a big four-door executive saloon. 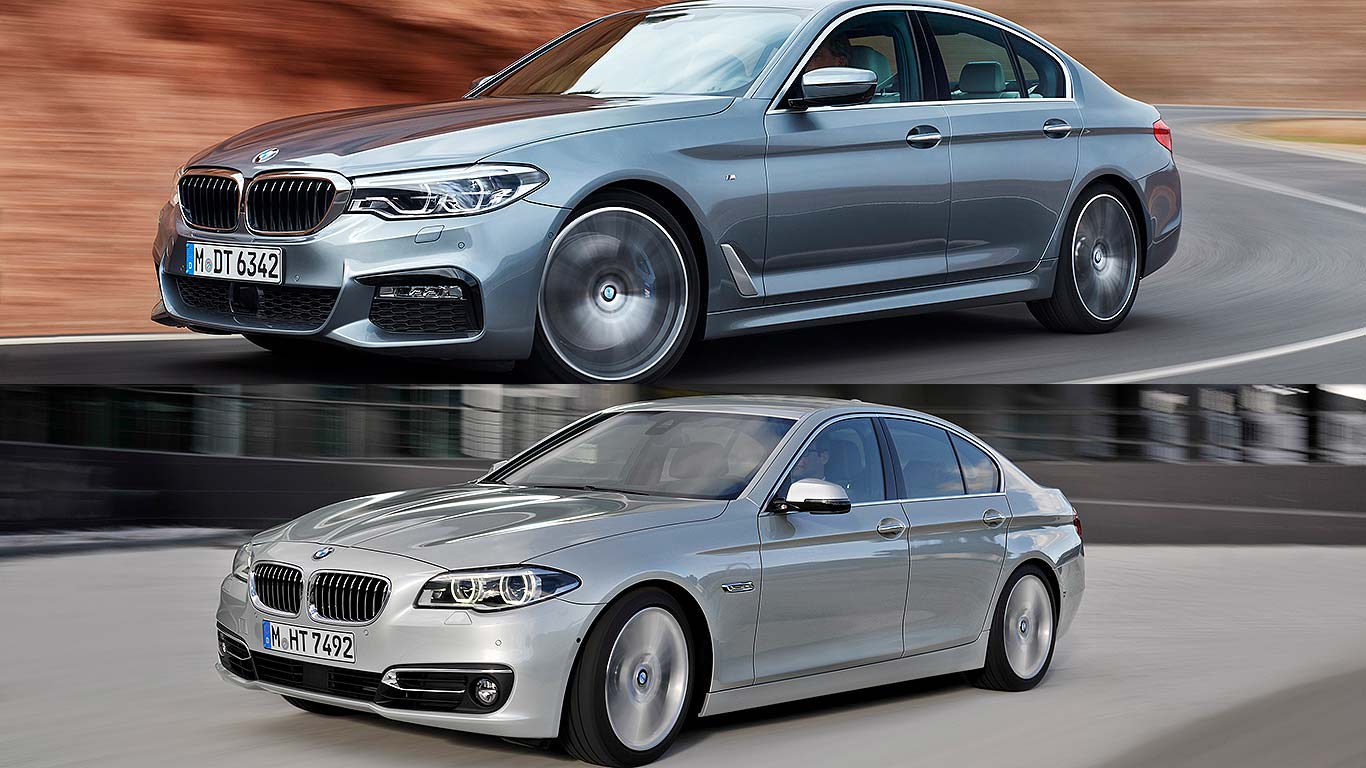 At first glance, they’re similar, some may sniff. They’re not, and the difference should be clear in the metal. The giveaways are the new 5’s broader headlights that feed into a wider kidney grille, a more tightly-sculpted front bumper, more sharply-creased sides and much more detail in the lower body sides. The tail lamps are wider too, and the rear end seems less dumpy than any 5 in decades.

It still reminds me of something 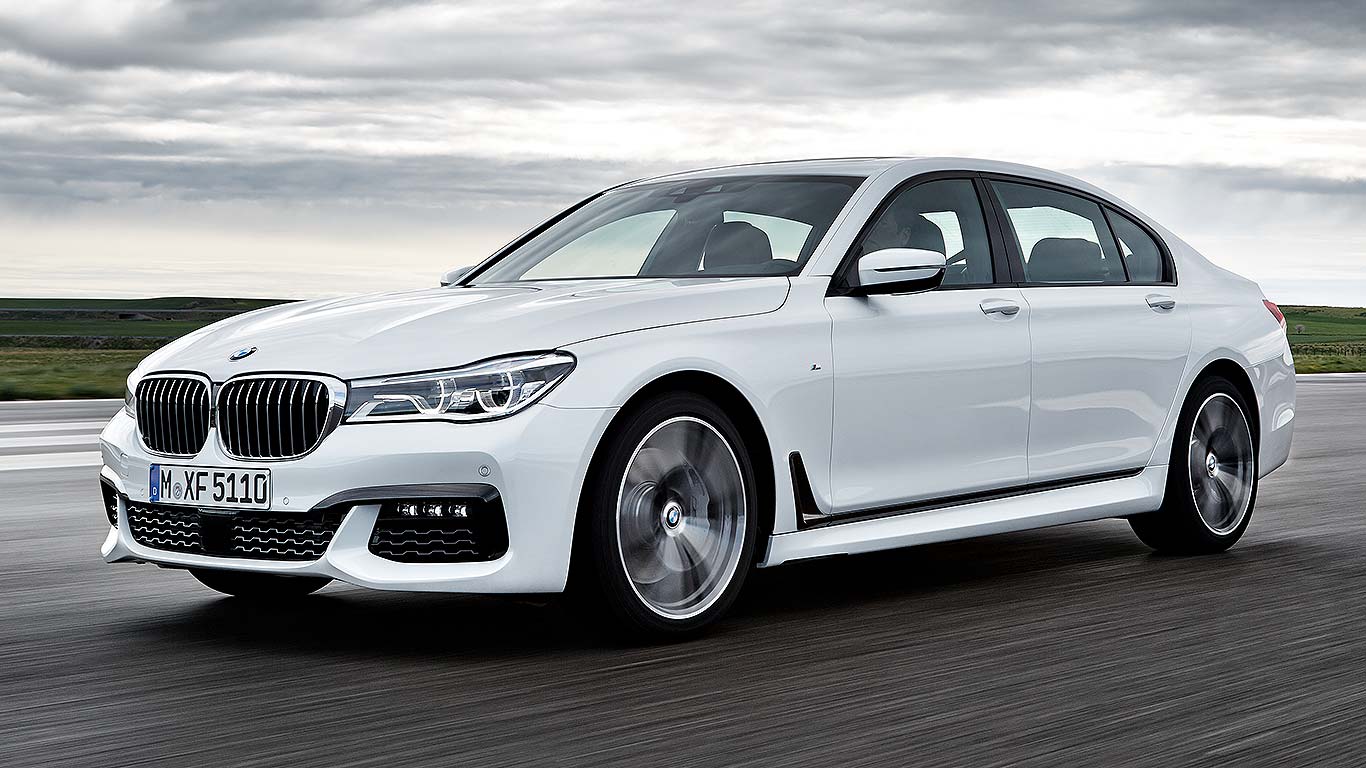 The new 5 Series is closely related to the new 7 Series, the first BMW saloon created in its modern style. Crisper, more complex and modern than the somewhat chunky current cars, it’s a striking look that the new 5 will carry well.

Let’s get technical. What platform is the new 5 Series based on? 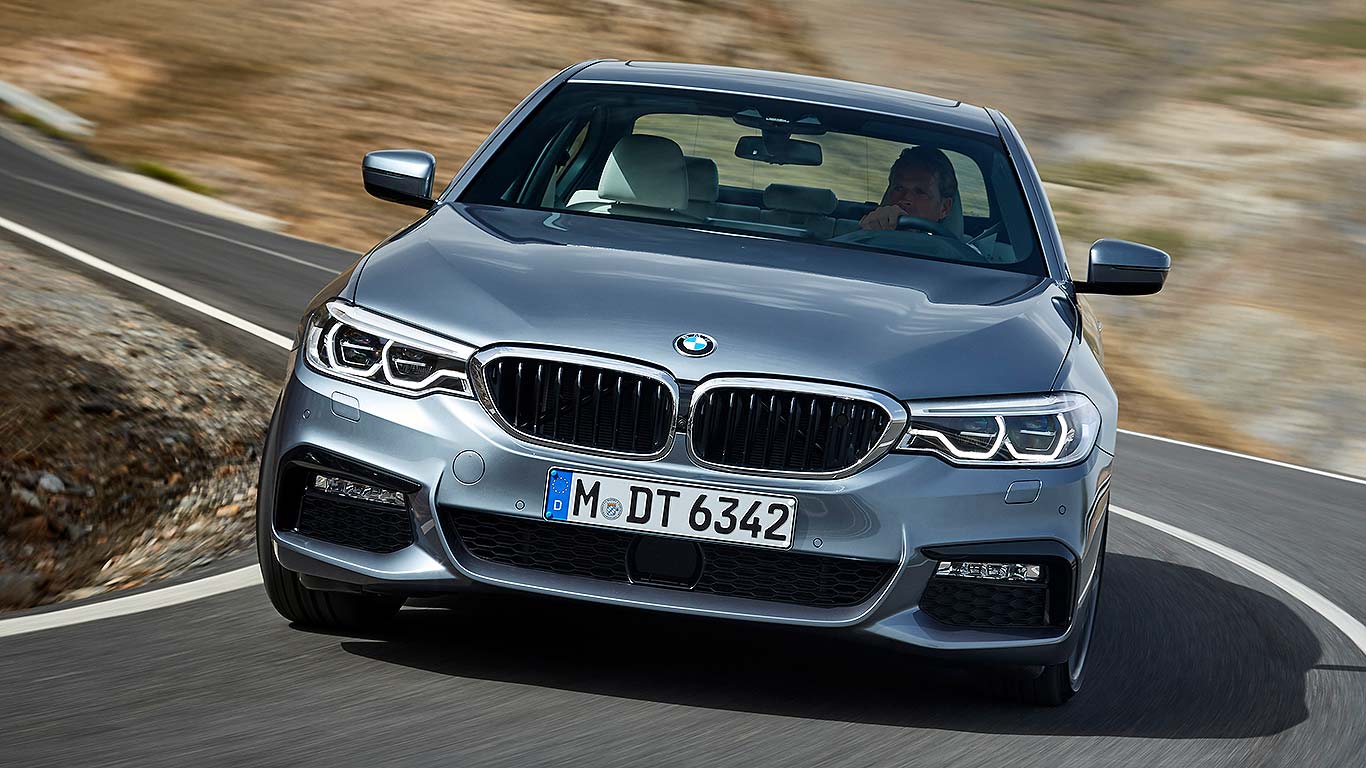 The new 5 Series, codenamed G30 in BMW-speak, uses the firm’s Cluster Architecture platform – dubbed CLAR. The 7 Series is already derived from this and so too will be the new 3 Series. It’s a flexible-platform approach similar to that used by Audi, who’s MLB Evo architecture is used in ever-more cars from A4 to Q7.

So the 5 Series is partly made from carbon fibre? 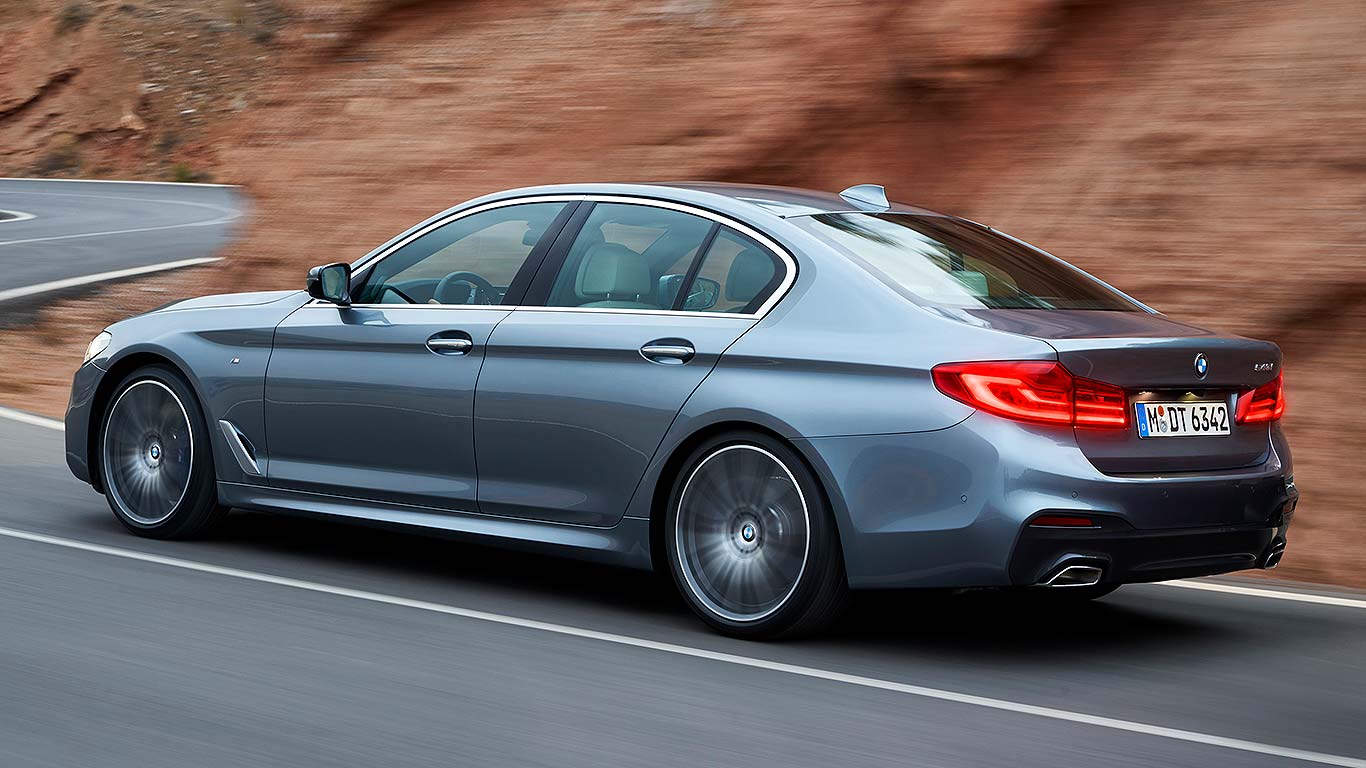 Well spotted: the 7 Series’ CLAR platform does indeed use carbon fibre. But the 5 Series doesn’t: that’s far too expensive for this sector, says BMW. Instead, it’s all lightweight steel and aluminium – so light, the car is up to 100kg lighter than today’s model.

What engine choice will the new 5 Series offer? 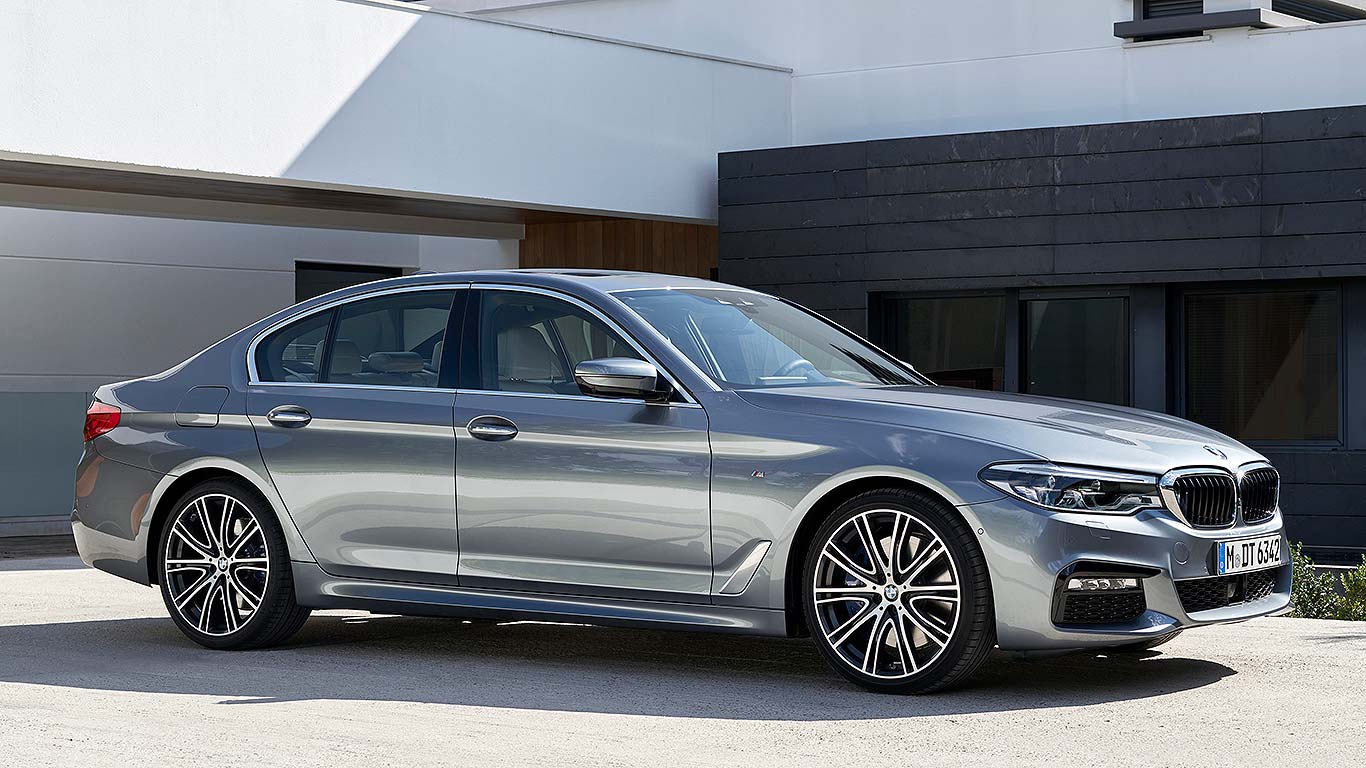 The important stuff: how fast is the new 5 Series? 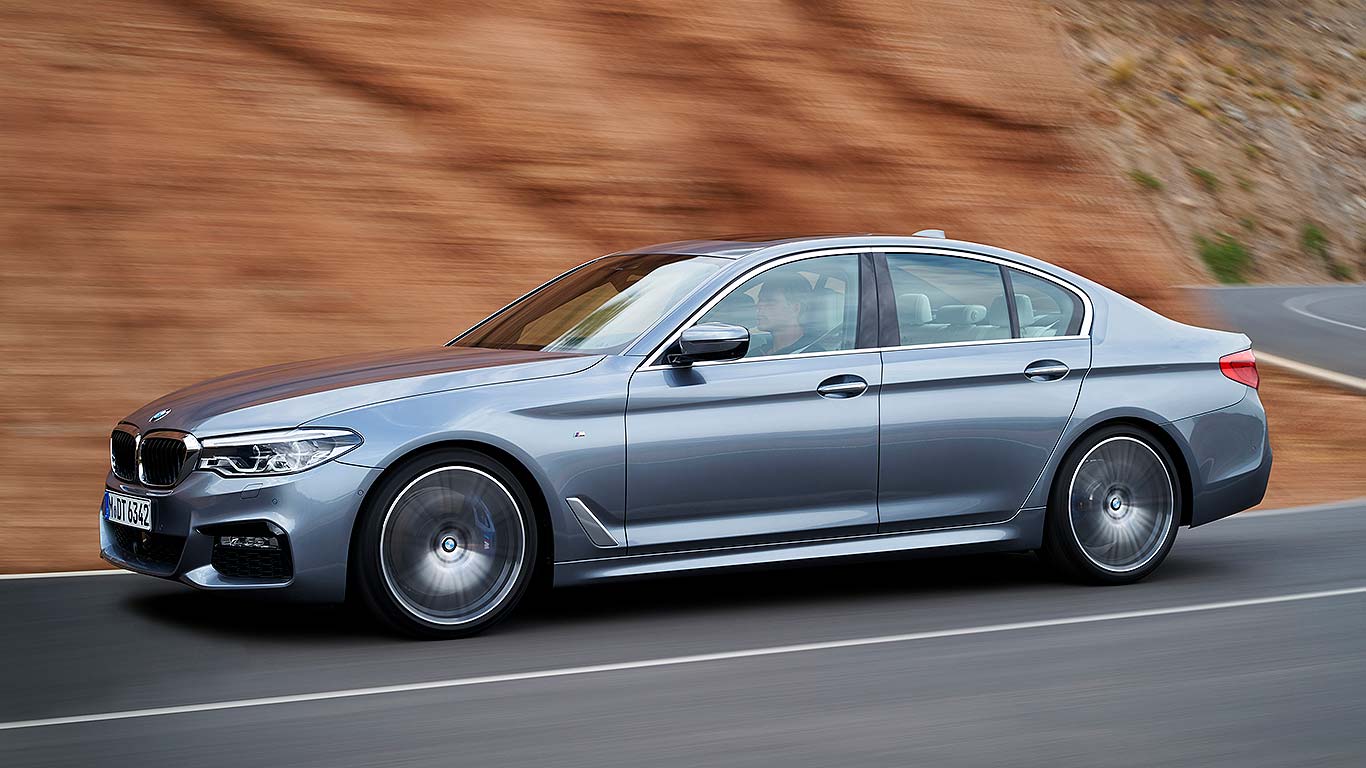 Let me guess, the new 5 Series uses less fuel than the current one?

Is the new 5 Series greener and more economical?

As the new 5 Series is lighter, BMW’s boasting that it’s more economical. The 520d is the current standout: 65.6mpg is 2.8mpg better than before. In time, a low-CO2 520d EfficientDynamics will launch, returning an unheard-of 72.4mpg and emitting 102g/km. A plug-in hybrid 530e iPerformance, using similar tech to today’s 330e, will also roll out, emitting just 49g/km. It will do 28 miles in full EV mode and, on the combined cycle, average 134.5mpg.

Will I finally be able to buy an all-wheel drive BMW 5 Series? 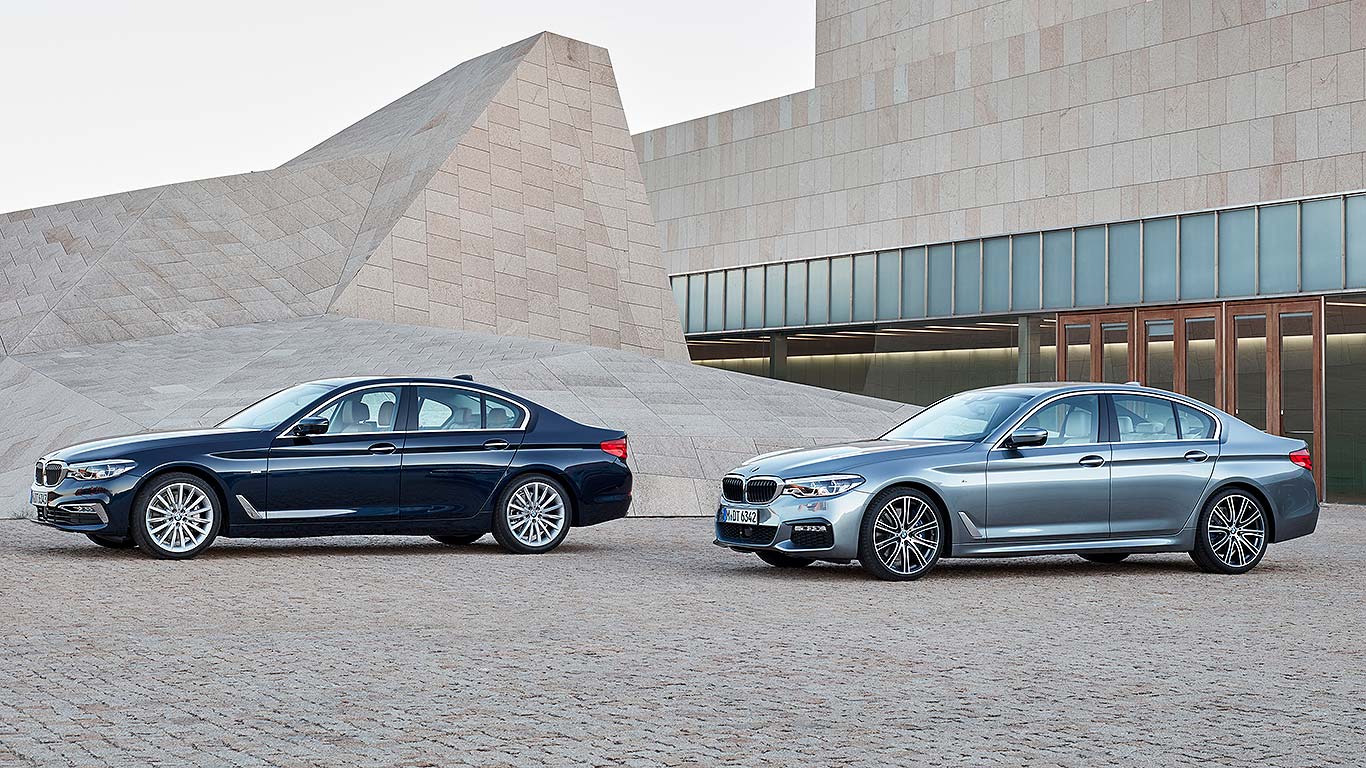 BMW has offered an xDrive on the continent for years – but never in right-hand drive guise. It will now though: G30 5 Series xDrive will stop any sniggering at stranded 5 Series drivers in the snow for good. It’s offered on the three high-volume models: 520d, 530d, 540i.

Will it still be good to drive?

Suspension is an even more sophisticated iteration of today’s class-leading 5 Series, with double wishbone front suspension, five-link rear and four types of active-type damping. You can even get active anti-roll.

I have a small garage. How big is the new 5 Series?

The new 5 is 4,935mm long, 1,868mm wide and 1,466mm high. Length, width and height have all increased slightly over today’s car, but they’re modest (width by 6mm, height by just 2mm) and have been done to boost interior space.

Can I park the new 5 Series by remote control?

You have a small garage, huh. You’re in look. It still sounds a bit space-age, but it’s a reality on the 7 Series, and now the tech comes to the 5 Series: Remote Control Parking. Stand outside your new 5 and drive it into that tight space, or your narrow garage, simply by operating the remote keyfob. Nobody needs to be within the car, and you can then turn the engine off and lock it up again via the remote. Incredible.

But will it drive itself when I’m in it? 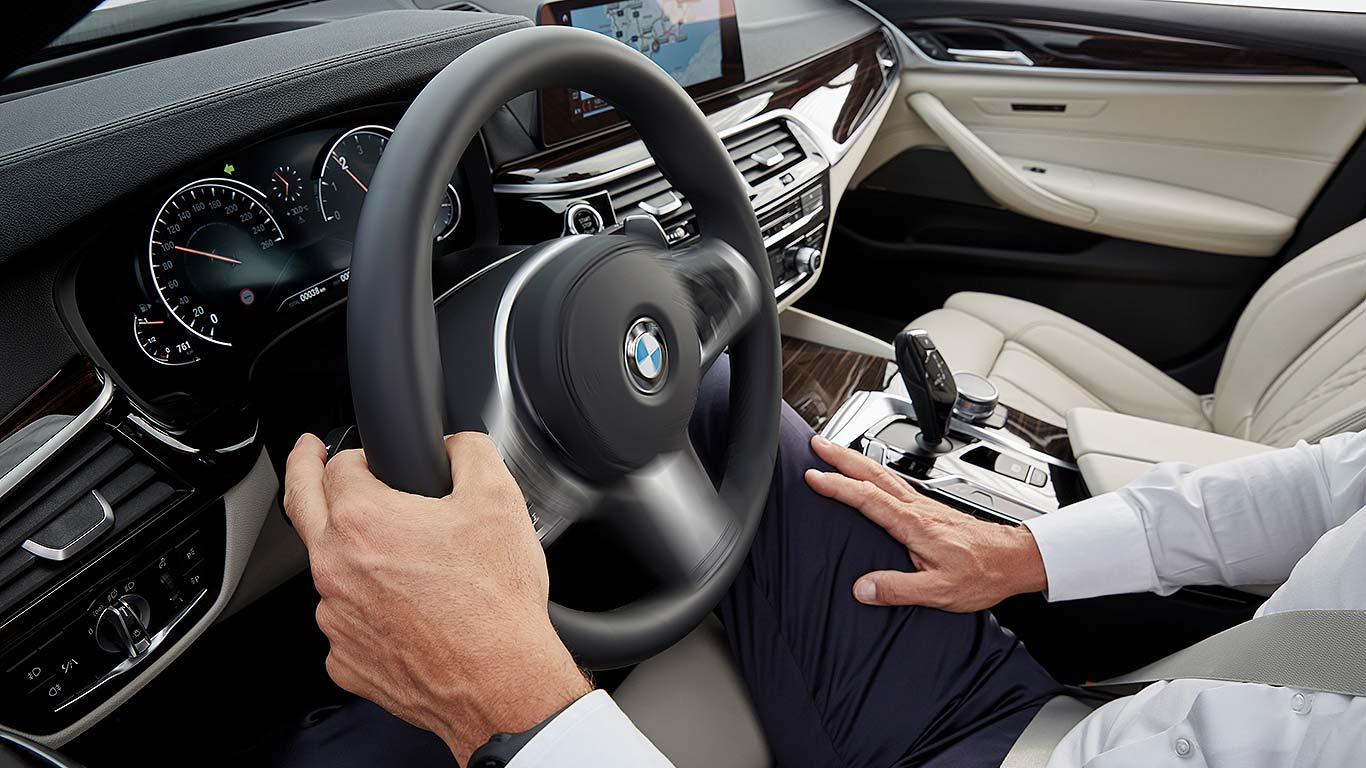 Here’s a controversial one for the new 5 Series: the Ultimate Driver’s Car is going to start driving itself. The Driving Assist Plus package will help you steer around sudden obstacles that appear in the road, even at 100mph, while a steer-assist function will steer the car for you within lane even if you only have a couple of fingers on the wheel. It’s not quite self-steer, but it’s pretty much there: “drivers can now take their hands off the wheel much more often than in the past,” states BMW, oddly: surely when we took our hands off the wheel in the past, we crashed? Which, incidentally, won’t be a concern here: the optional Driving Assistance Plus safety pack will see to that. 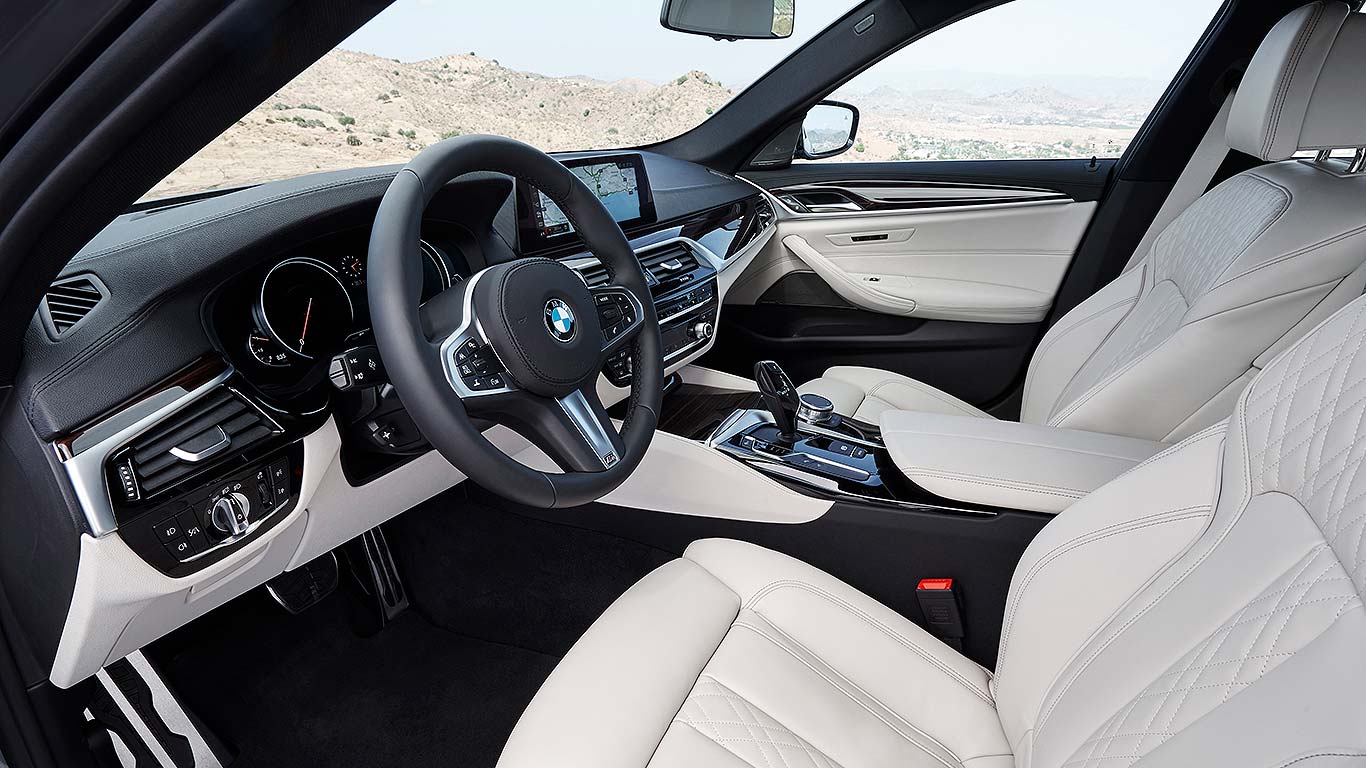 Like the outside, the interior is familiar. It’s a bit similar to today’s car, rather more similar to a 7 Series – but built from more meticulously-crafted materials than ever. The big infotainment screen now stands proud from the dashboard – because it’s now touchscreen-enabled. The previous one could only be controlled by the rotary dial. BMW has retained that too, meaning there are two ways of using the infotainment screen.

How high-tech is the infotainment? 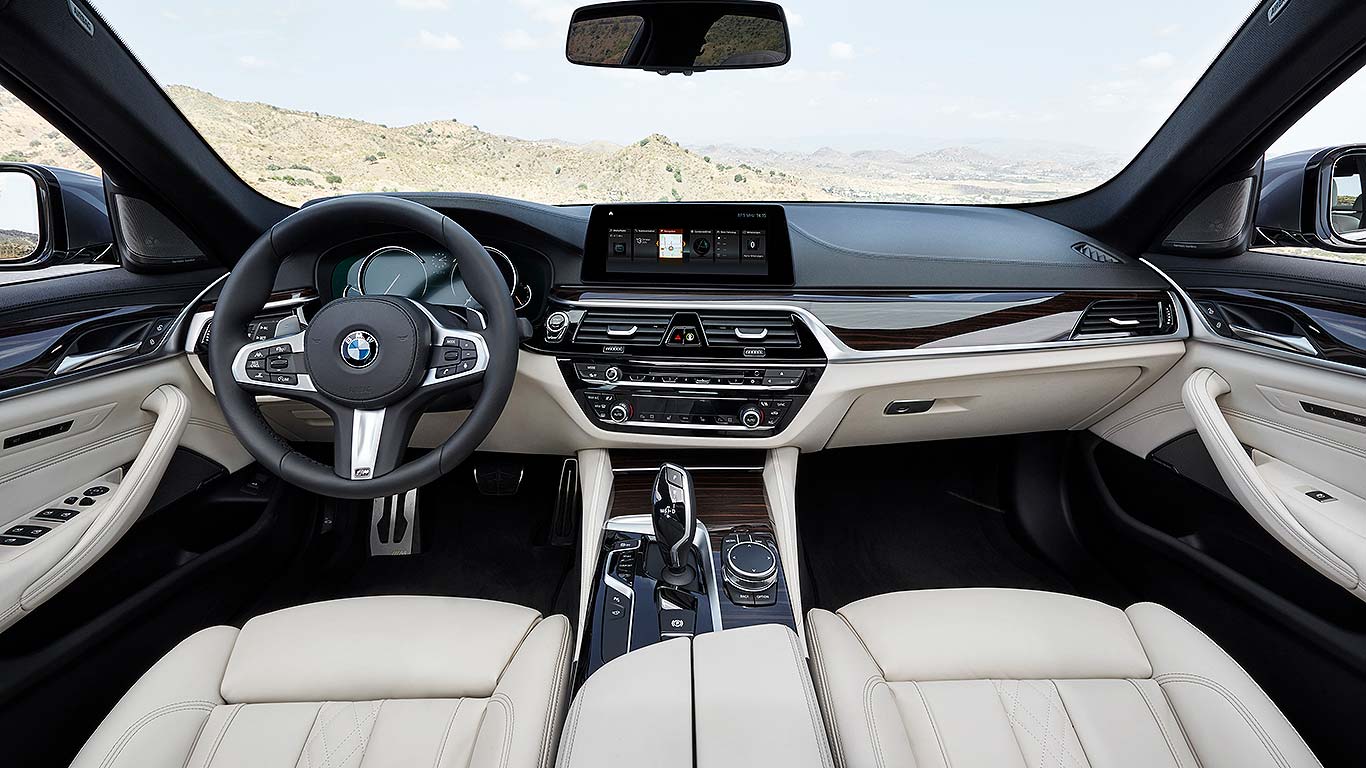 Widescreen sat nav is standard on all: no poverty-spec small-screen sat nav on basic models here. BMW’s offering Apple CarPlay on the new 5, a wifi hotspot for up to 10 mobile devices, and is the first car brand to build Microsoft Office 365 into a car – so businesspeople can check emails, calendar entries and contact details while on the move. Don’t listen to Chris Evans, clear your inbox before you get to your desk instead.

What’s this about gesture control? 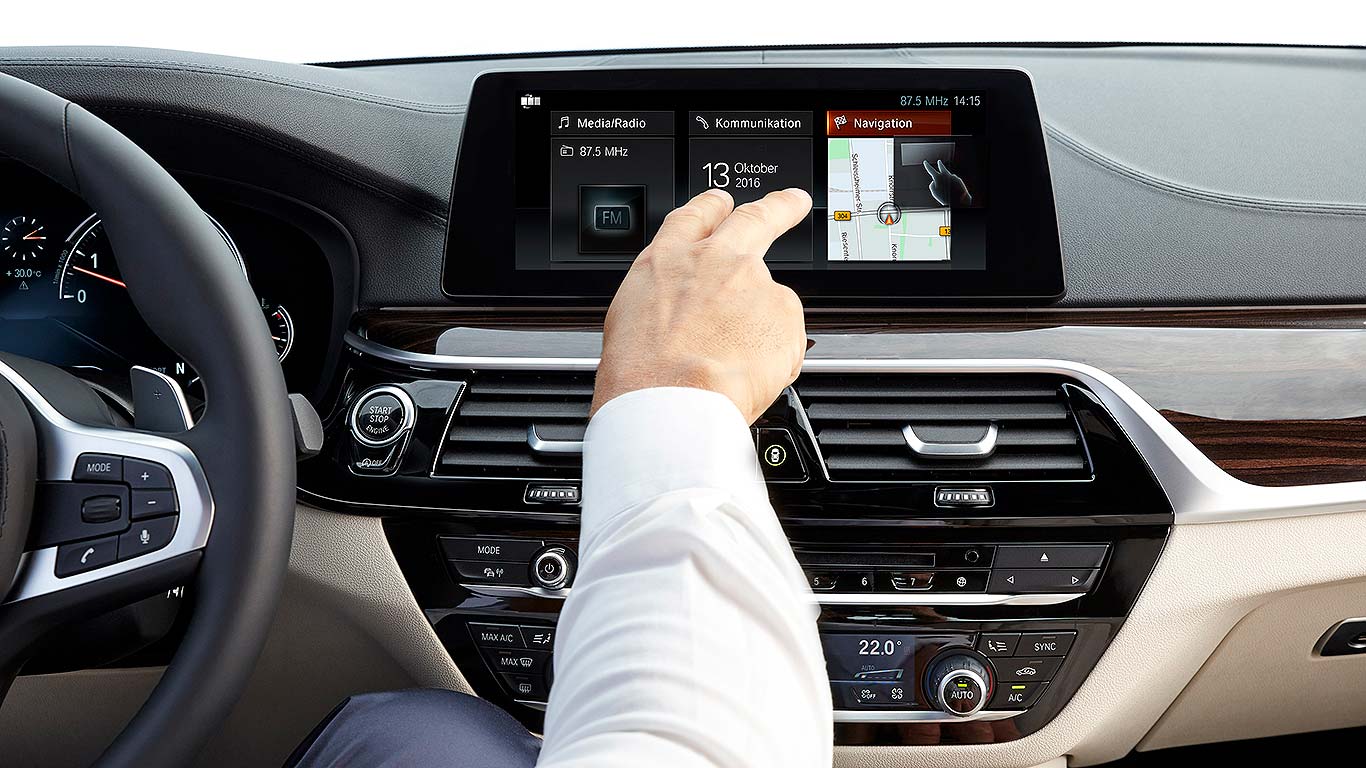 Gesture control was introduced on the 7 Series. Now it’s here on the 5 Series. Control the infotainment, sat nav, audio and other features via hand movements and finger gestures – the most satisfying thing is being able to bat away a nuisance call with, literally, a swipe of the hand in front of the gearlever. Seriously cool. 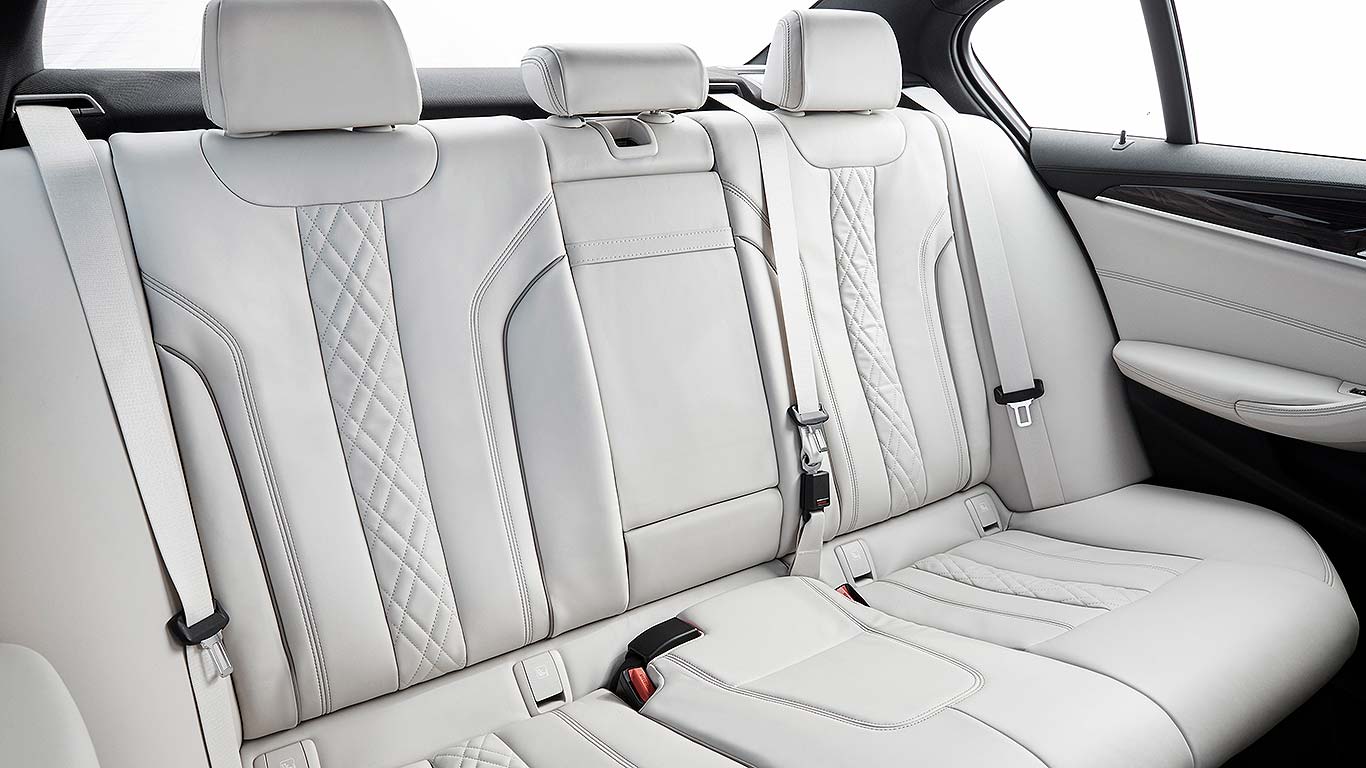 There’s “noticeably” more room, promises BMW. Headroom is improved, elbow and shoulder room are up and those in the back have more room to spread out. It’s easier to step in and out as well, while the more slimline dashboard makes it feel roomier in the front. It’s quieter within too, says BMW.

Put the boot in: how big is it?

The boot has a lower sill for easier loading. Despite the flowing roofline and sharper rear end, capacity is up to 530 litres; not the absolute largest in this sector, and it looks a bit narrow in the image here, but that’s still a class-competitive figure. Need more space? The Touring estate 5 Series follows soon after this saloon.

When will the new BMW 5 Series go on sale? 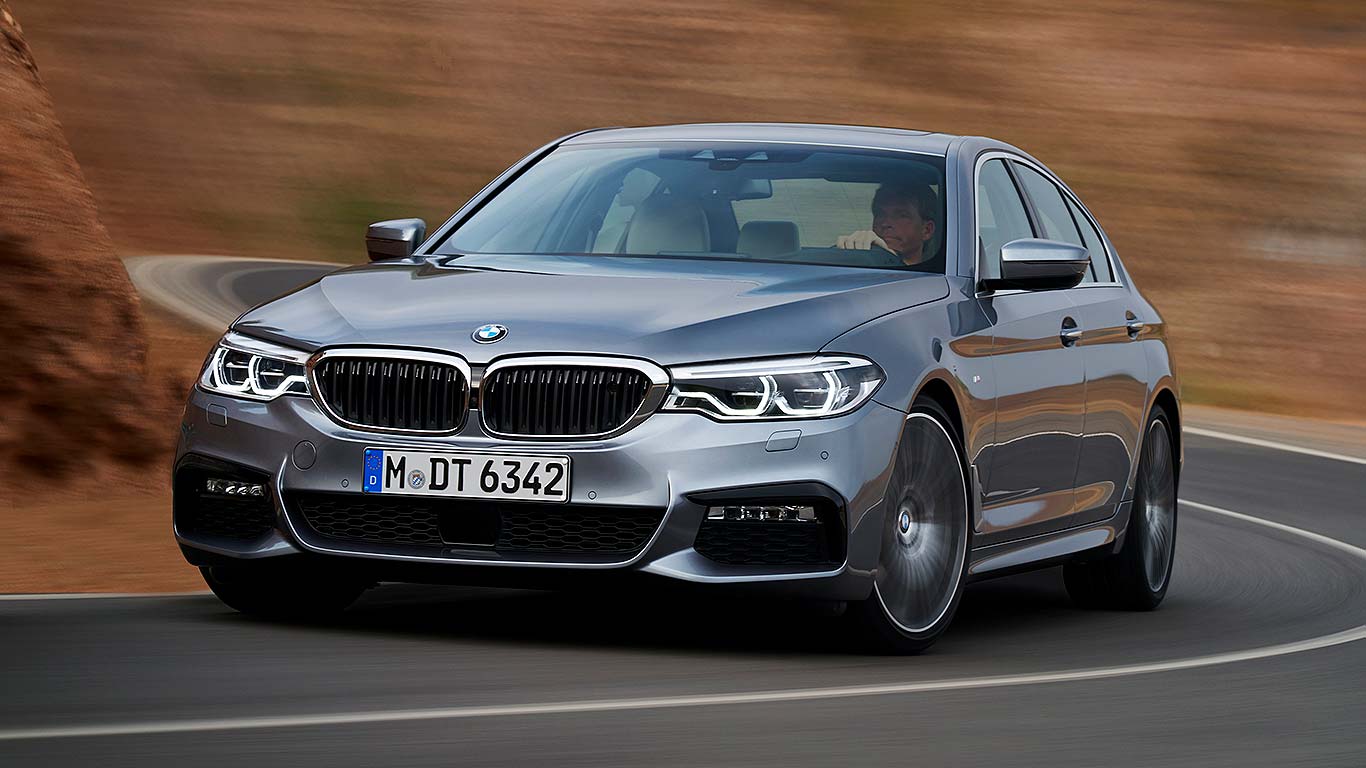 The new 2017 BMW 5 Series will go on sale in October, ahead of its market launch in Q1 2017. BMW will be keen to take pre-orders, particularly from fleets eager to reward execs with a new 5 ready for the March 2017 ‘17’ registration.

How much will it cost?

What rivals is the new 5 Series up against?

BMW’s most feared rival is the new Mercedes-Benz E-Class, itself an ultra-sophisticated car that’s more like a mini-S-Class than ever. The Audi A6 is getting on a bit these days, so doesn’t worry BMW. Perhaps the next-biggest headache it has in Europe is the Jaguar XF, which is superb to drive and these days ticks sensible-shoes stuff such as rear seat space and infotainment tech as well.

Any cool details about the new 5 Series I need to know? 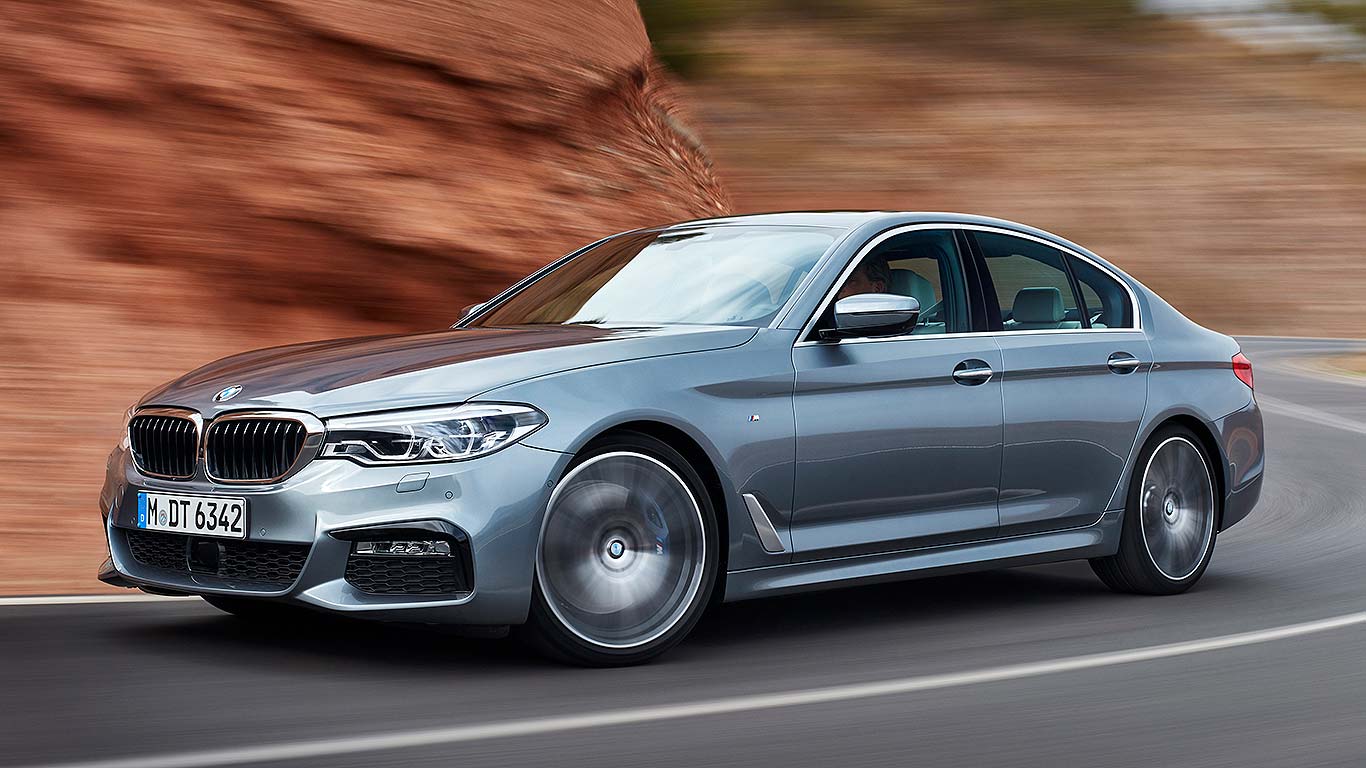 Like the headlights? For the first time in years, they now have glass covers, rather than plastic, for an extra-sparkling look. LED headlights are standard, too. It’s ludicrously slippery through the air: the Cd drag coefficient of 0.22 sets a new sector benchmark. You can have an air ionisation system (which also includes a fragrance diffuser). Like your audio? Choose from basic, the 12-speaker BMW upgrade, a 600 watt harmon/kardon premium system and a very premium Bowers and Wilkins Diamond system that pumps out 1,400 watts.

That’s all very cool. Any more?

Ever rolled up to a junction, spotted a gap, only to find the stop-start has kicked in and left you stranded? The new 5 Series cures this with intelligent auto stop-start. It uses the sat nav, stereo camera and radar to ensure stop-start won’t be activated when it’s unwarranted or would be inefficient. We’re familiar with active cruise control and speed limit displays, but how about active cruise control that knows the speed limit up ahead and will blend the car’s speed up or down accordingly? The new 5 has it. It will also stop you driving the wrong way onto a motorway, roundabout or one-way street, and warn you if other vehicles have priority at confusing junctions.

This is an important car for BMW, huh?

You bet. Not only has BMW sold 7.5 million of the things since the 5 Series was launched back in 1972, analysts say (the current F10 5 Series alone has sold 2 million models). It’s also the firm’s most profitable car, unit-for-unit. It’s very important indeed…