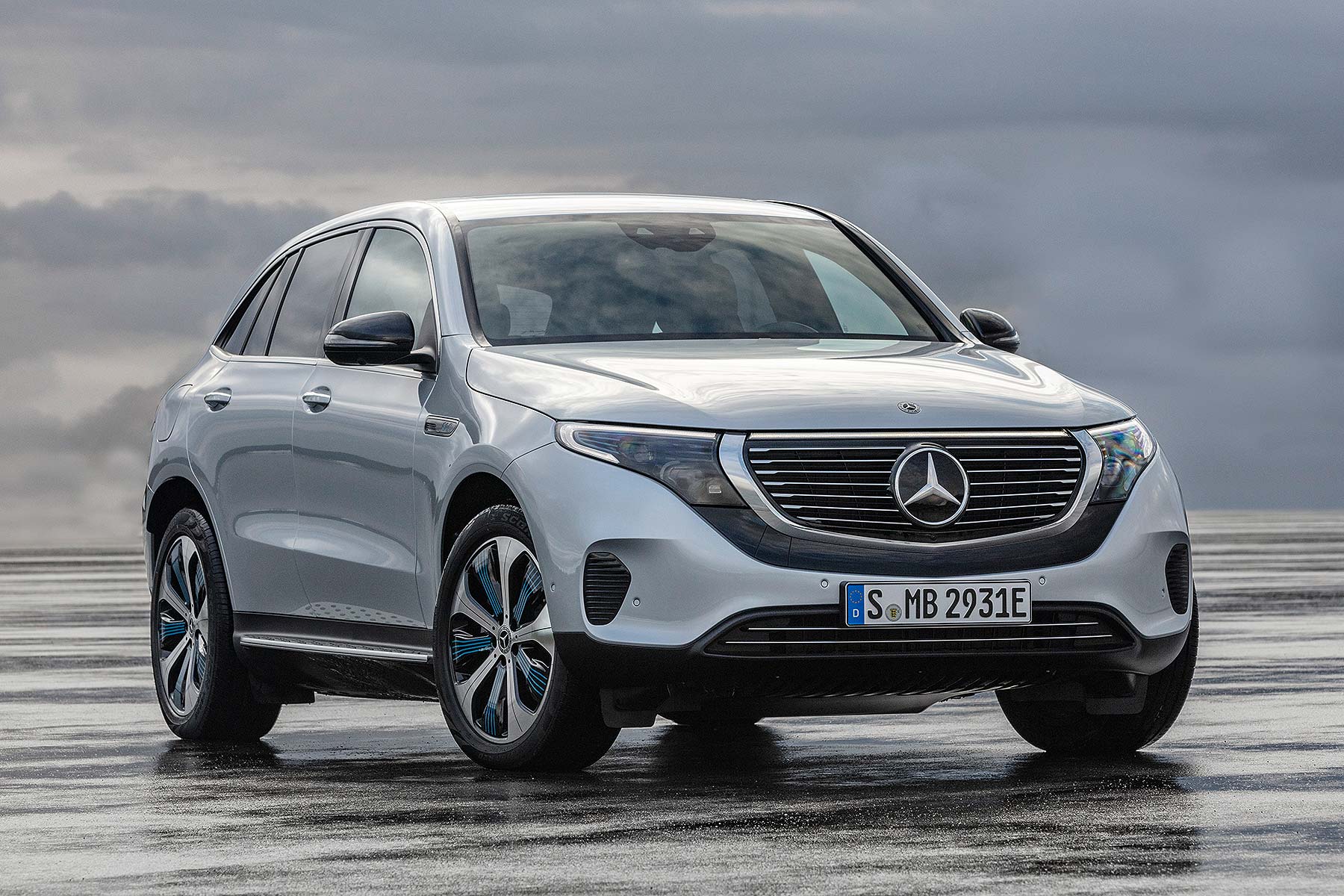 The Mercedes-Benz EQC is an all-electric SUV rival to the Tesla Model X and Jaguar I-Pace. It has an 80kWh lithium-ion battery providing a 280-mile range, and two powerful motors for sporty acceleration and all-wheel drive traction.

Mercedes-Benz’s first EQ ‘Electric Intelligence’ model, the EQC is the firm’s first fully electric SUV – and the first fruits of its multi-billion-pound investment in the EQ line.

It is also the first production-spec German SUV to be revealed, beating the Audi e-tron plus the BMW iX3 and Vision iNext (to, we assume, the delight of Mercedes-Benz bosses).

The EQC is scheduled to go on sale in summer 2019.

EQC: the GLC of EV SUVs 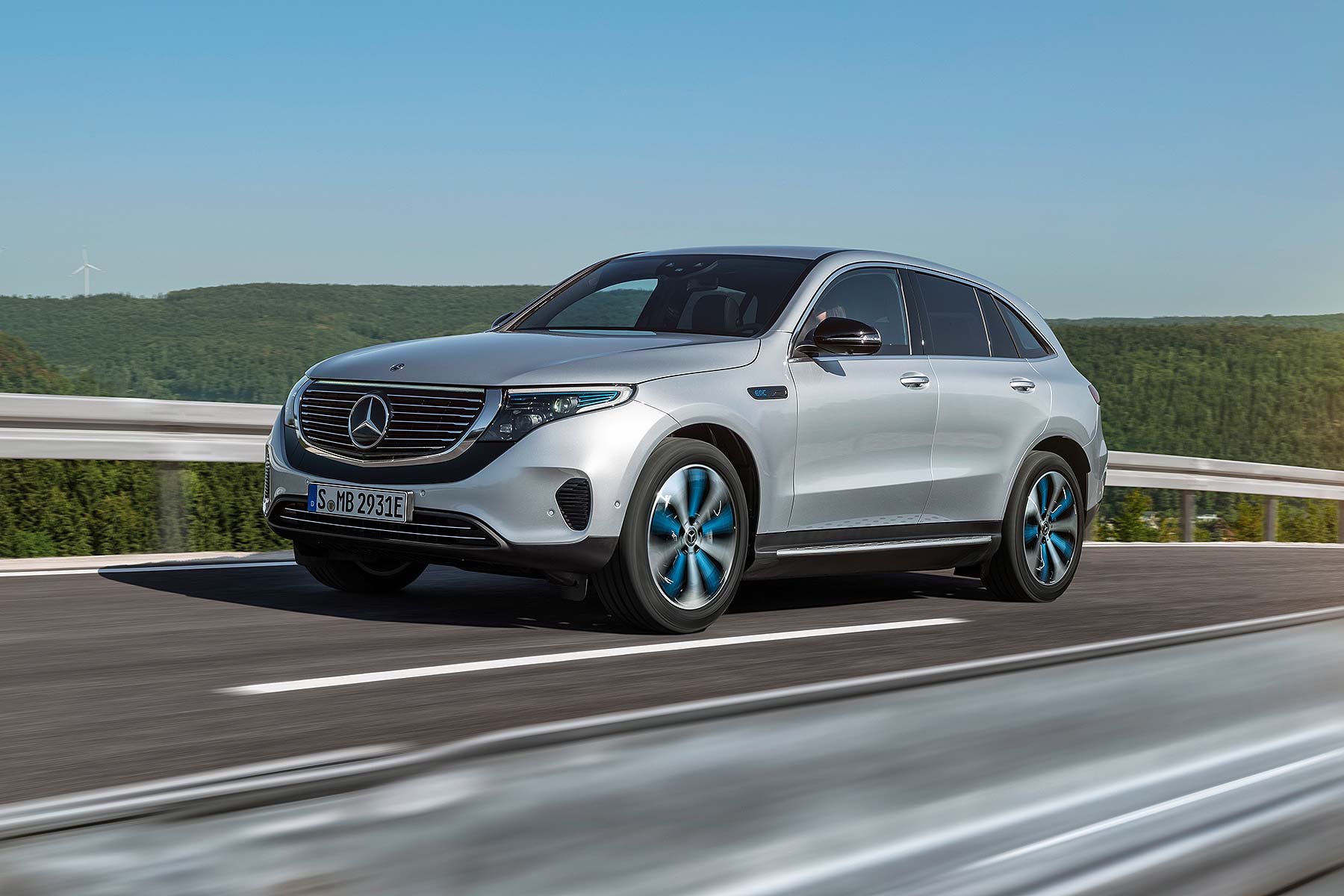 As the name suggests, we should consider the EQC an EV SUV alternative to the existing GLC; part of the Mercedes-Benz mid-size ‘C’ range. In time, presumably, there will be smaller EQA and larger EQE variants.

For now, it’s all eyes on EQC. “It is a genuine Mercedes-Benz,” said Ola Kallenius, board member for R&D and product development. It has “classic attributes such as quality, safety and comfort”.

But the EQC also has “dynamic performance, thanks to two electric motors at the front and rear axles, with a combined output of 300 kW (that’s 408 hp) and an intelligent operating strategy for a superior electric range”.

0-62 mph takes 5.1 seconds and top speed is governed to 111 mph. And although the EQC weighs over 2.4 tonnes, 564 lb ft of pulling power should make light work of it, if you’re not fussed about overall range. The EQC is even rated to tow a 1.8-tonne trailer.

All the key facts about the new #MercedesBenz #EQC in one short video!
Visit https://t.co/QlsdtSz2L8 for more info. #switchtoEQ

What about charging? Mercedes-Benz fits a standard onboard water-cooled charger capable of taking 7.4 kW. A Mercedes-Benz Wallbox will be offered, charging three times as fast as a domestic wall socket.

It will also take CCS DC rapid charging, up to a maximum of 110 kW. And, via the MBUX infotainment system, over-the-air EQ-specific functions allow features such as pre-entry climate control and EQ-optimised navigation: this calculates the fastest route with the shortest charging time. 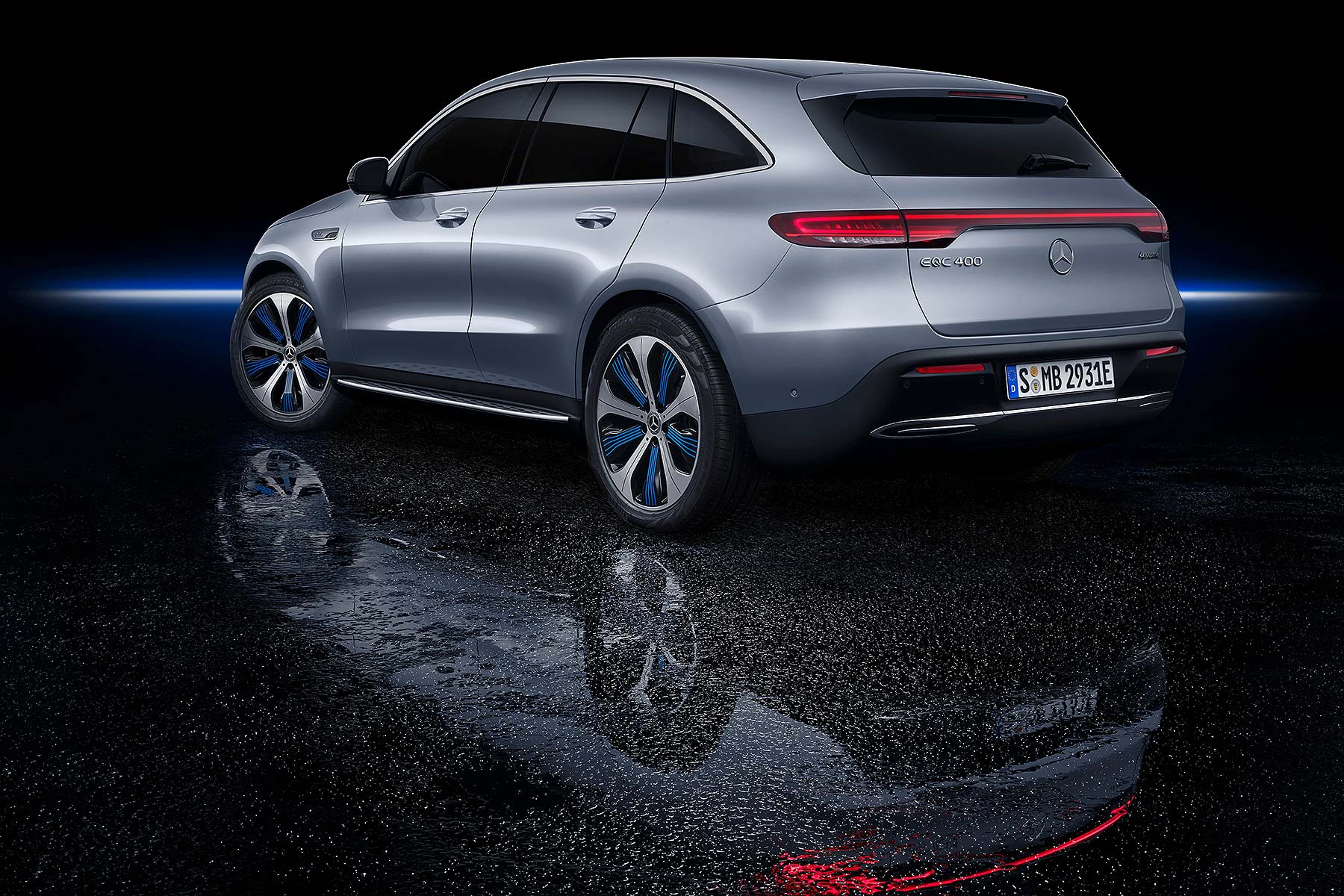 The Mercedes-Benz EQ range is being designed under the idiom of ‘Progressive Luxury’ said design chief Gorden Wagener. The EQC is our first look at “the ‘next big thing’ to come tomorrow”.

The EQC’s lines are seamless and clear, and he describes it as boasting “an avant-garde electric look with trailblazing design details and colour highlights typical of the brand both inside and out”. 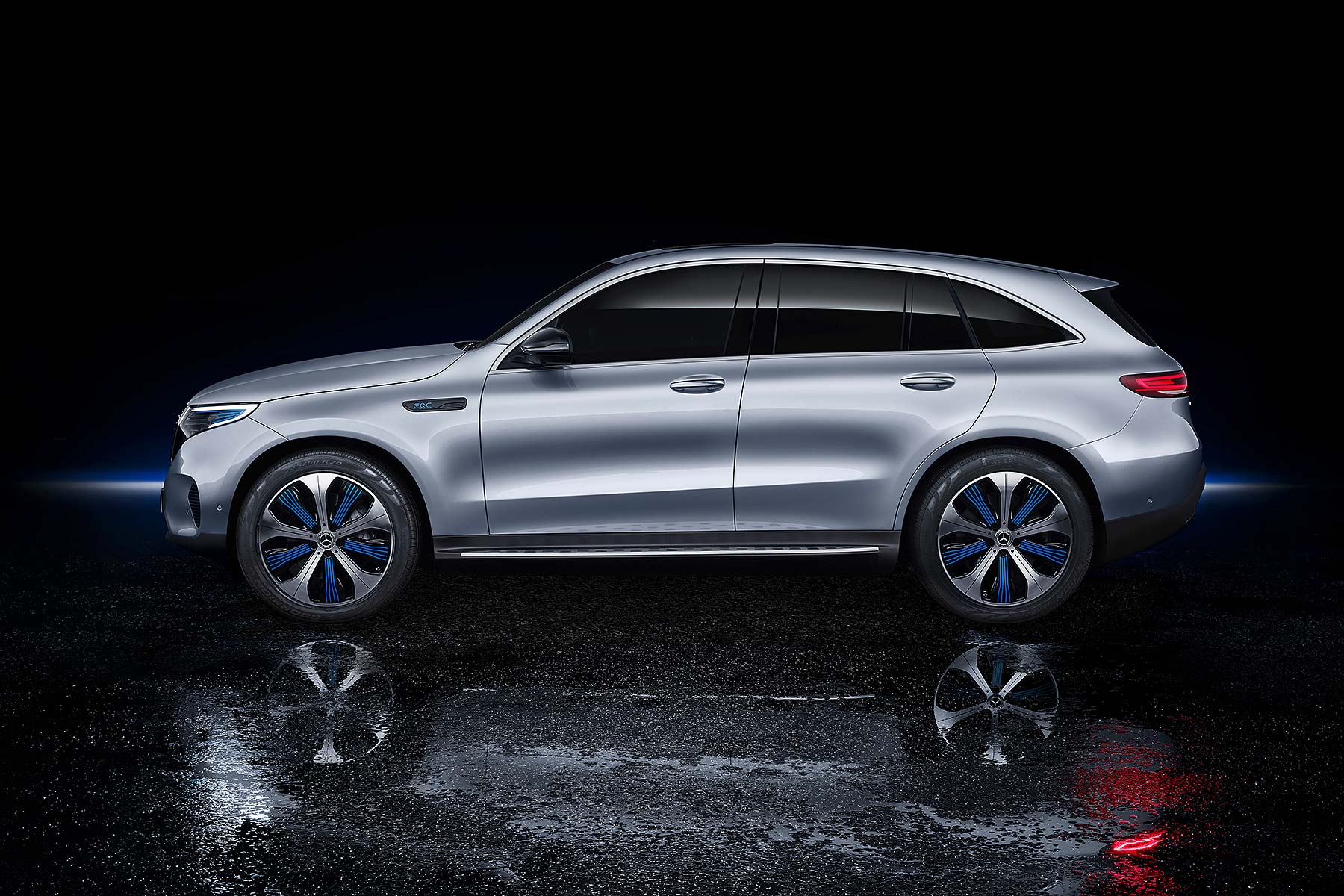 Muscular, stretched proportions are more crossover than SUV; the roofline is extended, the waistline low and the rear end curves place it mid-way between SUV and SUV coupe. 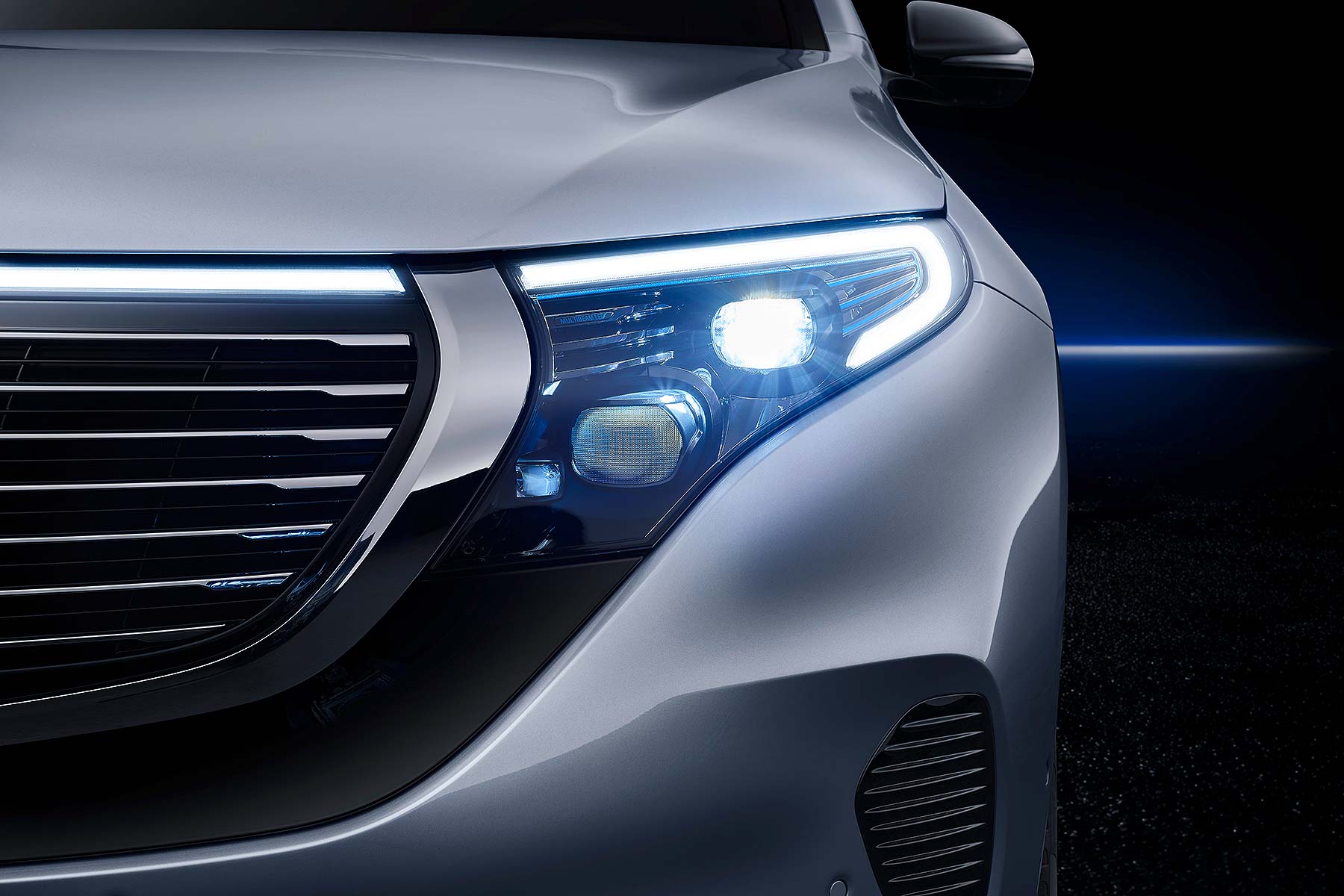 It will be striking at night. That large black panel at the front has an optical fibre border at the top, which creates a horizonal light bad stretching almost the full width of the nose. The headlights also carry the blue stripes and black background that all EQ models will use. 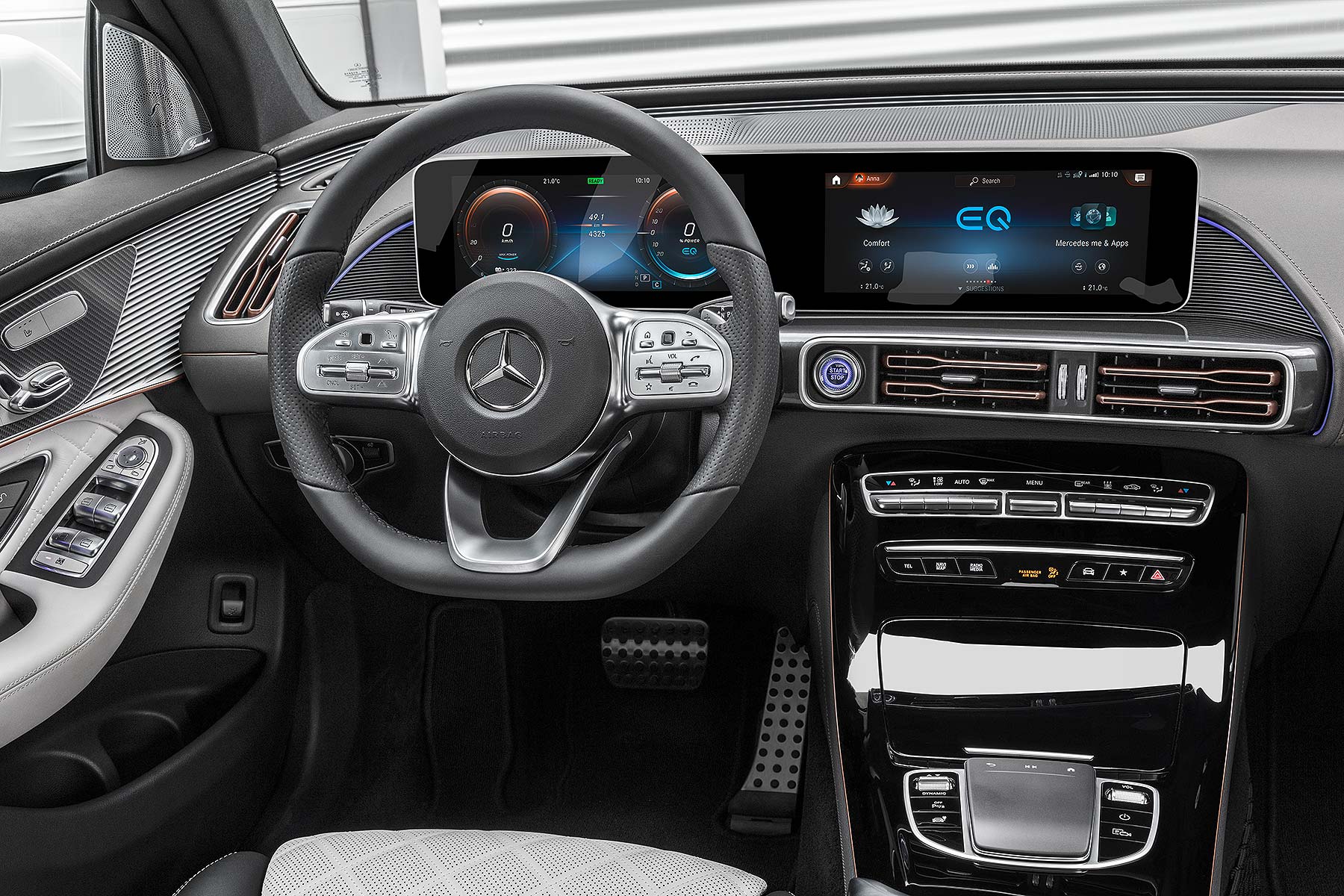 The neat ribbed edges of the instrument panel immediately stand out inside. Mercedes-Benz says they’ve been modelled on the cooling vanes of a hi-fi amp. It’s intended to portray Wagener’s ‘electro-look’, which draws just as strongly from consumer electronics as it does from traditional cars. 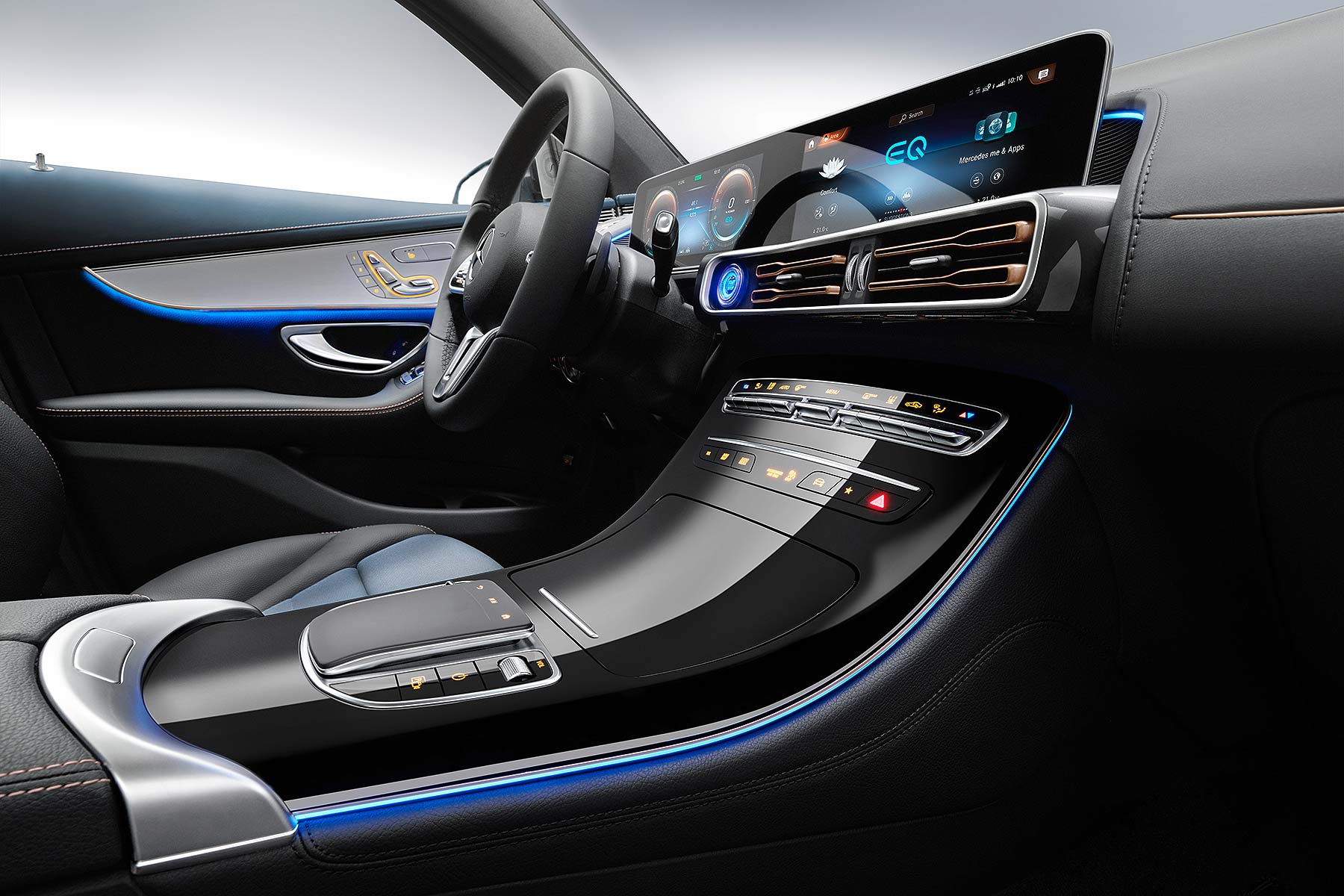 An asymmetric design gives a driver-focused cockpit. Mercedes-Benz tells us to particularly focus on the “high-tech, high-gloss cassette housing flat air vents with key-shaped, rose-golf coloured louvres”. Which isn’t something you are generally encouraged to notice on a traditional Merc. 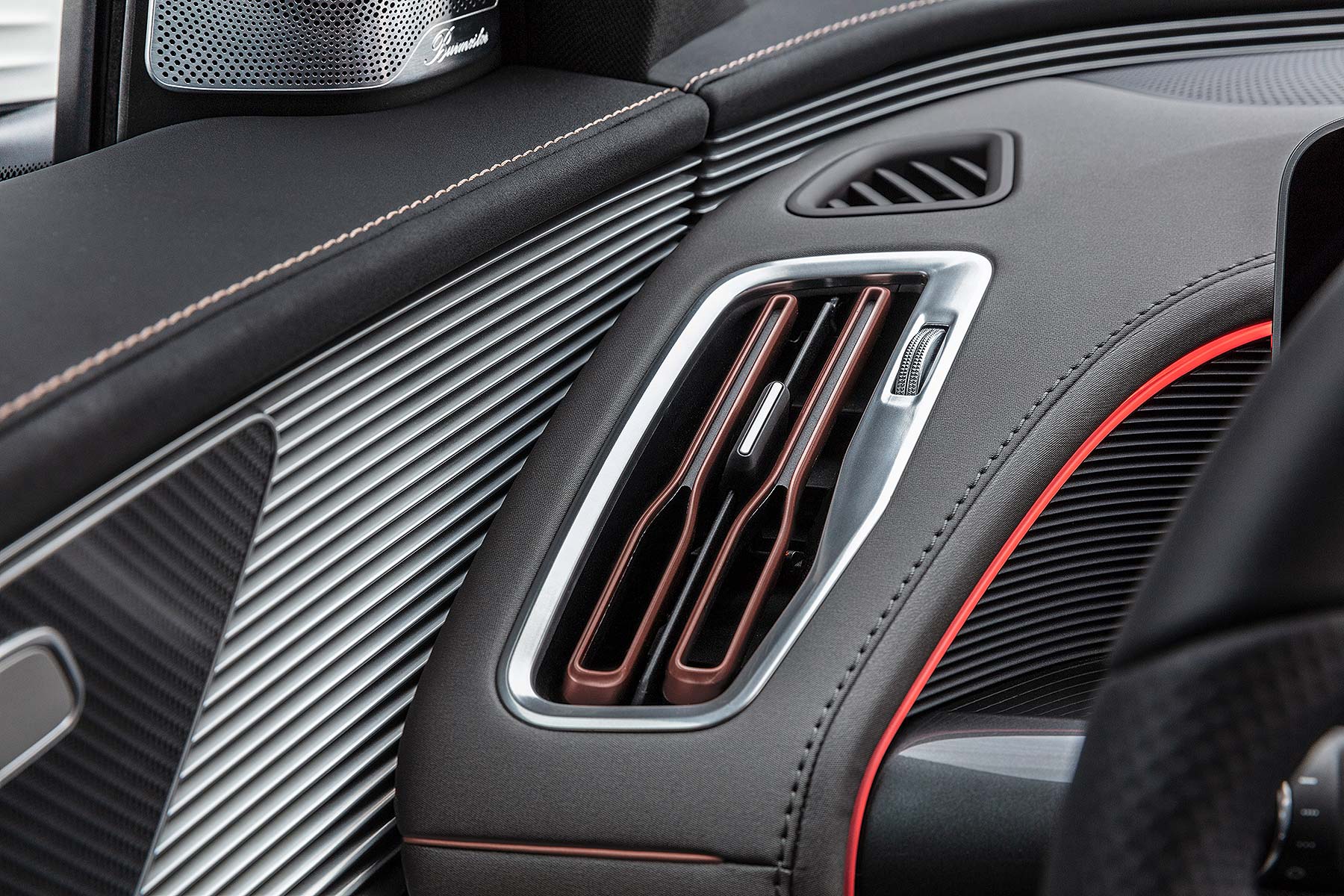 It’s going to be extremely quiet in there as well. EQC powerpacks are mounted on rubber isolators which, along with umpteen other sound isolation measures, means the first Mercedes-Benz electric SUV will be a whisper-quiet ride. 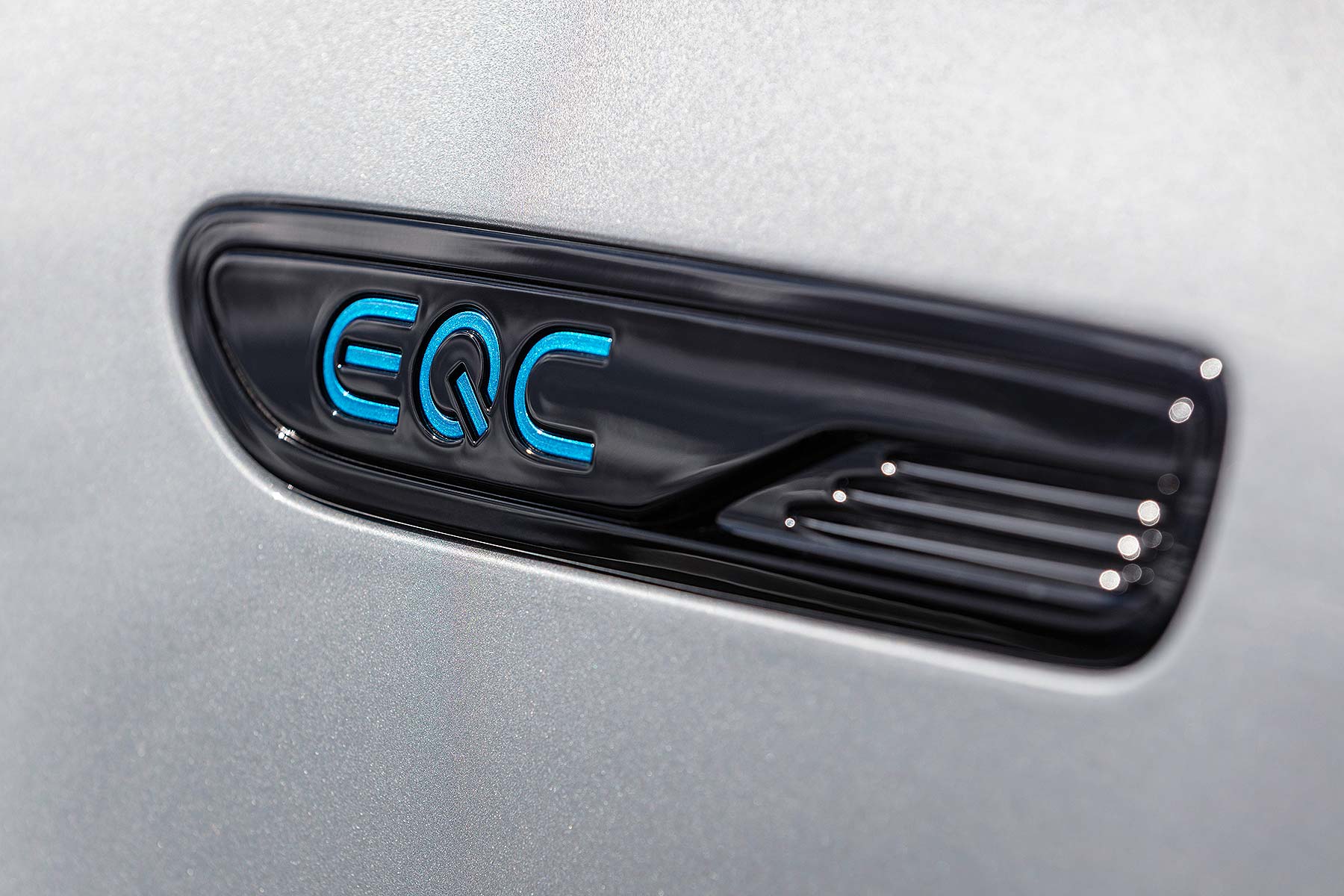 “With the EQC – the first fully electric SUV from Mercedes-Benz – we are flipping the switch,” said the firm’s charismatic chairman and CEO Dieter Zetsche. “Electric drive is a major component in the mobility of the future.

The EQC is the first electric Mercedes-Benz. The first answer from the German premium trio to Tesla and Jaguar. The big-brand battle is becoming fully charged at last.