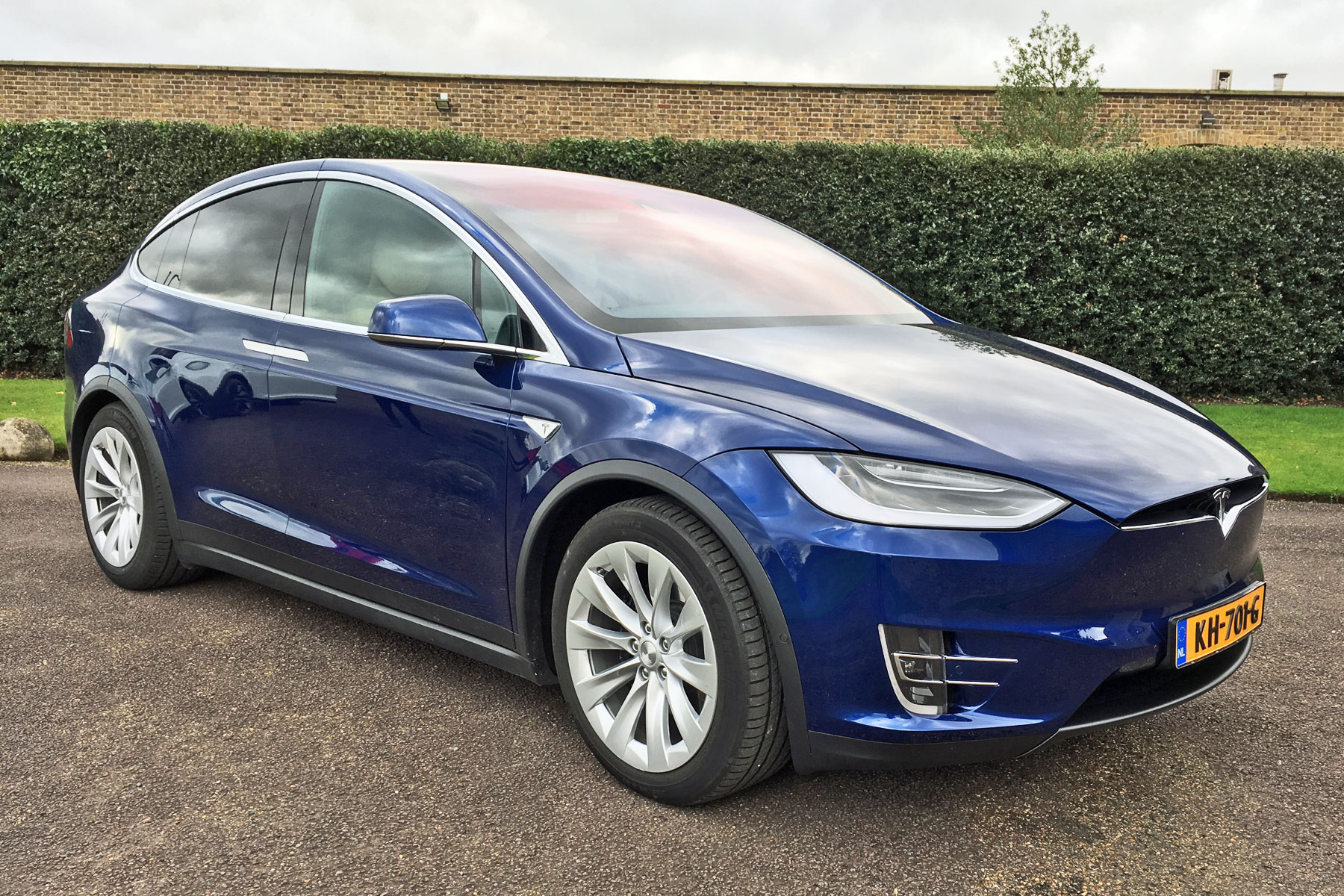 This is Tesla’s long-awaited SUV, based on the same platform as the Model S but boasting SUV practicality and four-wheel drive on all models. At 2.27m wide and 5m long, does it work on UK roads? We’ve had a brief drive to find out.

OK, so the Tesla Model X 90D will cost you £85,000 (including the government’s plug-in car grant), while an entry-level 75D starts at £76,500. Don’t expect any movement on that: Tesla doesn’t do negotiation, especially with a car as hyped as the Model X.

Although the Model X has no obvious rivals, there’s also no shortage of upmarket SUVs you could buy for this money. These include the Range Rover, Audi Q7, BMW X5 and Volvo XC90. None of these are electric – although some do offer hybrid powertrains – while Jaguar has just unveiled its electric I-Pace at the LA Auto Show. That’s a couple of years away from hitting the market, though. 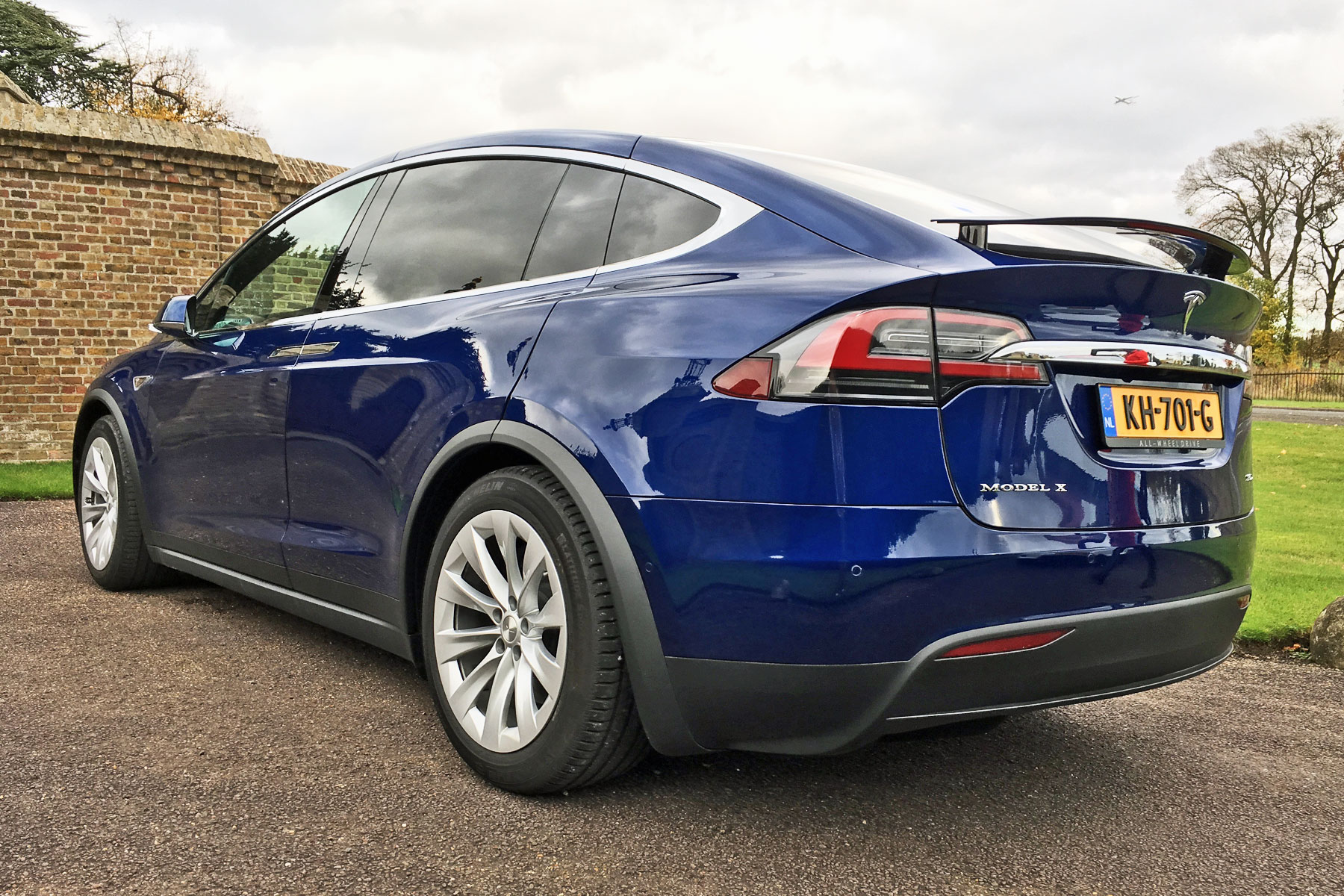 As you’ve probably clocked by now, the Tesla Model X doesn’t have an engine. Instead, it uses a 100kWh battery located on the floor, powering two electric motors located over each axle to provide four-wheel drive on all models.

It depends on the kind of enjoyment you expect from driving. It’s a heavy car, with light steering and relatively high centre of gravity (compared to the Model S saloon), so it’s not fun in the ‘B-road blaster’ sense.

However, there is fun to be had in exploiting the performance. With instant torque (all 325lb ft of it) and no gear changes getting in the way, happiness is an empty motorway slip road. It’s a weird sensation accelerating hard in a Tesla – your insides are thrust backwards, yet there’s none of the usual noise you associate with being propelled forward at such a rate.

When you’re not in the mood for such shenanigans, it’s such a serene car for tooling around town or schlepping up miles. Autopilot makes motorway miles even easier, working like adaptive cruise control but going a step further. Indicate and it’ll check for traffic around you, then change lanes if it feels it’s safe. Legislation dictates that you have to touch the steering wheel regularly, though. 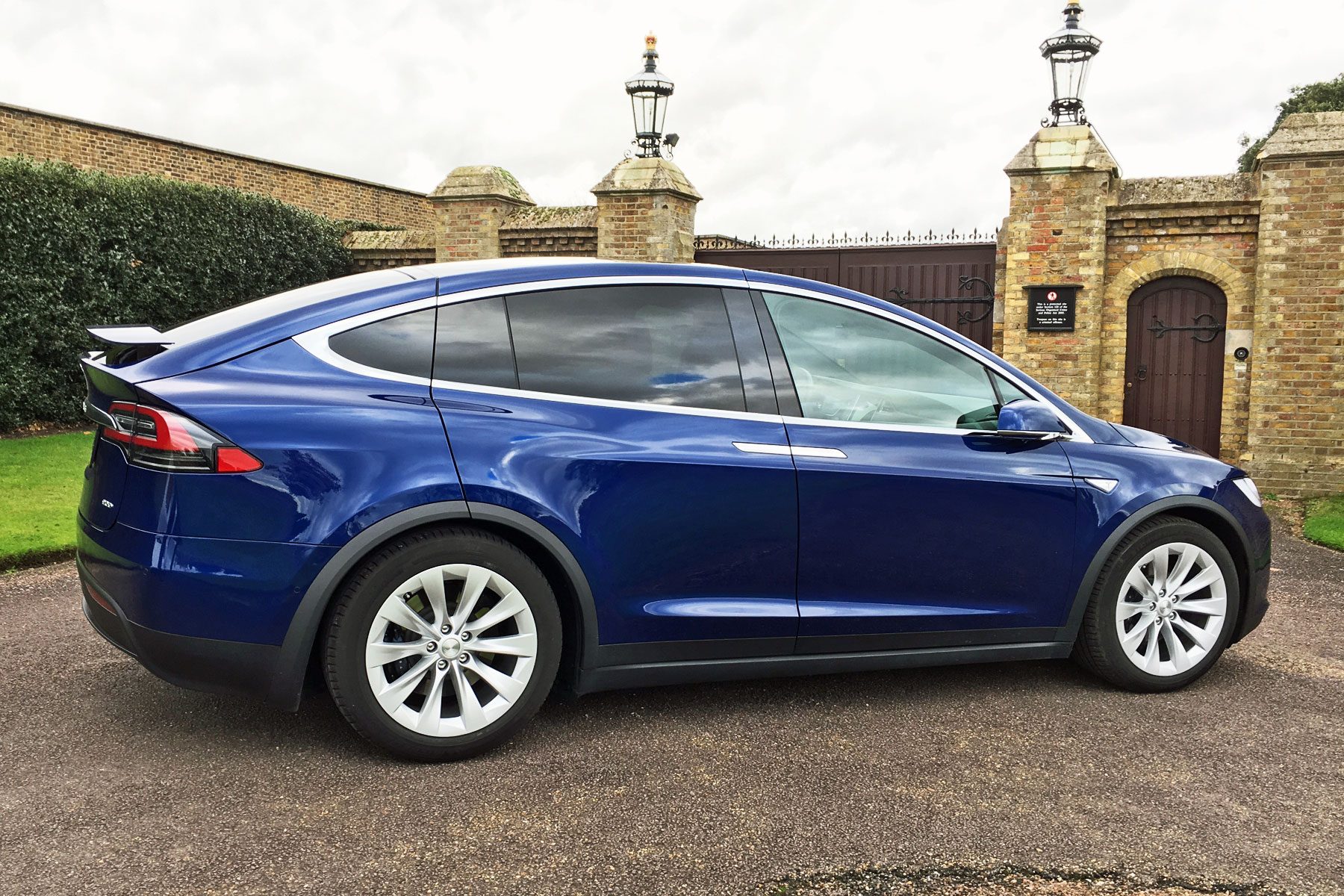 This is where the Model X could be a huge money-saver. Relying on an electric motor, the 90D boasts an official range of 303 miles. Sure, if you’re enjoying that phenomenal acceleration regularly that’ll dip a bit. But still, as long as you can charge at home, the chances are you won’t have to worry about running out of electricity.

If you do input a destination into the sat nav that’s further away than you’ll get on the remaining range, the Tesla will take you via one of its ‘Supercharger’ points. Get your order in before 1st January 2017 and you’ll be able to use these for free – after that, you’ll have to pay. Tesla hasn’t confirmed how much it’ll cost, but it will work out cheaper than running a petrol or diesel car.

Weird, frankly. Enter the cabin through the incredible falcon-wing doors, and you’ll find up to seven seats (depending on how many you’ve ordered). Up-front, there’s the huge tablet-style touchscreen infotainment system (only bigger than a tablet), while our test car featured a wood-effect dash. Although perhaps not quite up to the standards of luxury you might expect from a car of this price, it feels better quality than an early Model S we’ve previously tested.

You sit reassuringly high up, with light coming in through the huge windscreen-cum-sunroof and brightening up the cabin. We spent less than an hour in the car, but doubt we’d be complaining about backache after a longer journey. One pleasant feature of the Model X is the HEPA air filter, which allows medical-grade clean air to fill the cabin, no matter how polluted the air outside the car is. There’s even a bioweapon defence mode. 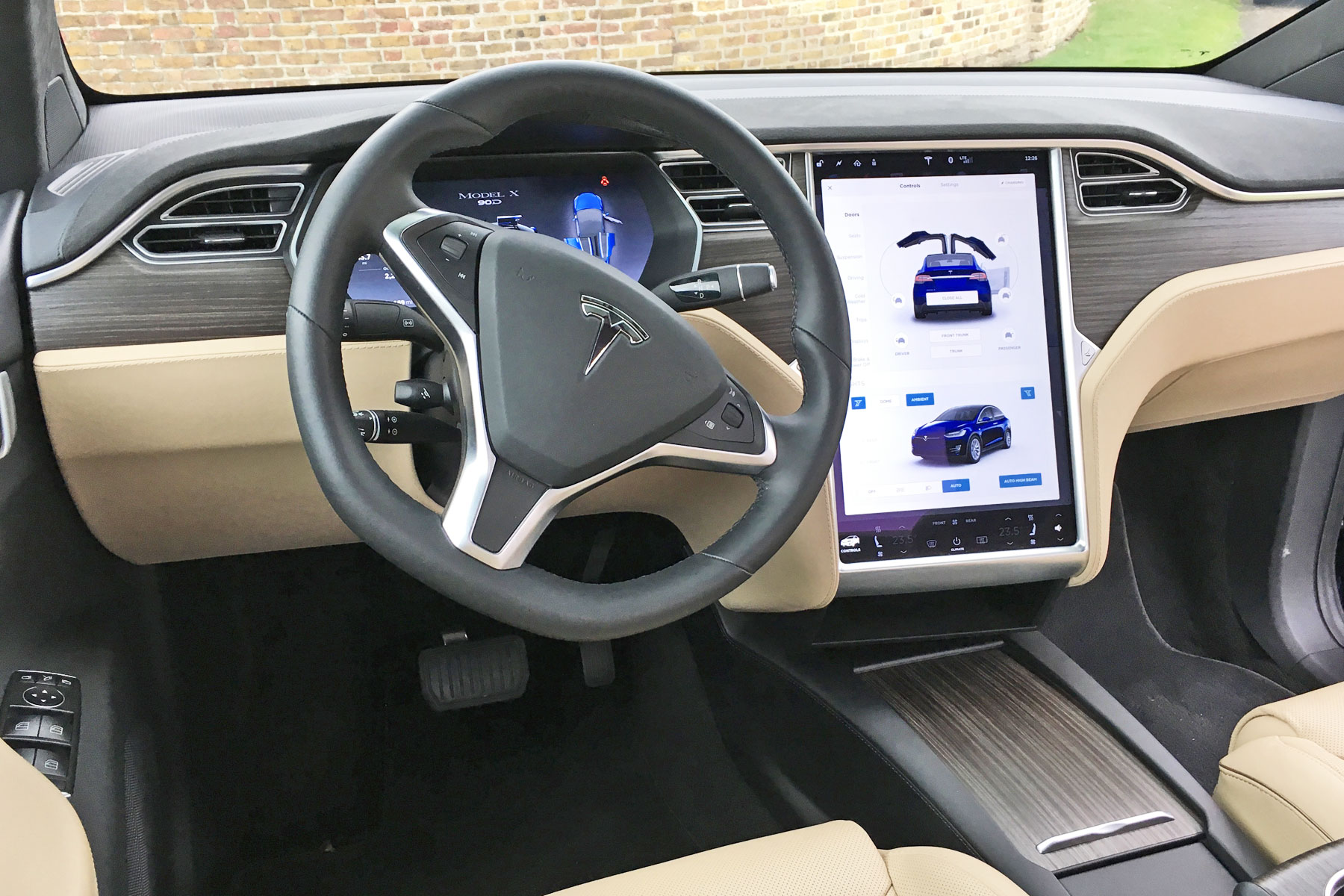 Unless you really need seven seats, we’d opt for a six-seater for a less claustrophobic feel, while ordering five seats will get you a larger boot. Those huge falcon-wing doors enable easy access to the front and rear, while their design means they don’t need a huge area to open.

Oh, and if you want to lug a caravan with the Model X, now you can. An optional tow hitch gives it a towing capacity of 2,270kg, making it the first ever electric car capable of towing.

Where do we start? As Tesla positions itself more as a tech firm that a car company, it offers updates for all its cars that can be installed remotely, meaning you’ll always have the latest tech if you buy a Model X (or at least be able to get it).

For example, the latest update (8.0) features a new look for that huge 17-inch touchscreen, with changes made to maps and its media player. Autopilot has also been enhanced.

Tesla claims the Model X is the safest SUV ever and we doubt there’s much this side of a Volvo XC90 we’d rather be for a crash. The lack of a combustion engine means most of the front-end is crumple zone, while tech such as automatic emergency braking means you’re less likely to be in an accident in the first place. 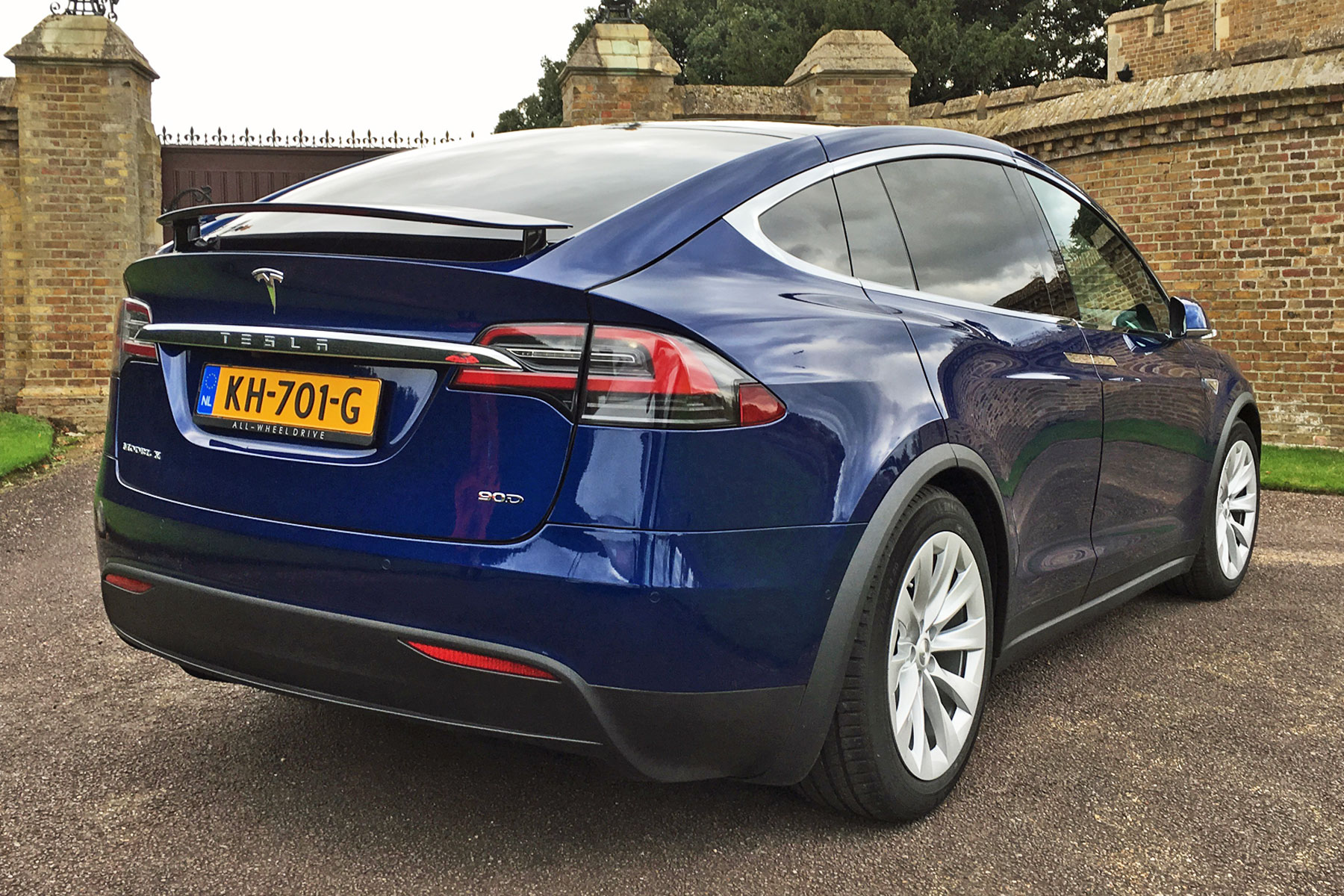 How much can you afford? All versions are four-wheel drive, and for most, the performance of the entry-level (if you can call it that) 75D will be more than adequate. If money is no object, the P100D is the one that’ll get you the most respect from Tesla geeks. And scare your mother in law.

There isn’t really anything like the Model X on the used market. The Model S has been around since 2014, and you can now pick up early examples for around £55,000. If you’re after an SUV, perhaps consider the popular Mitsubishi Outlander PHEV. That’s a bit like buying a Huawei because you can’t afford an iPhone, though.

The Tesla Model X won’t be for everyone. Shelling out £80,000 on a car that is still relatively niche isn’t easy to justify – especially when you can get a Range Rover for the same money. And the Range Rover can be filled up in a matter of minutes at your local petrol station.

A Range Rover isn’t set to be 2017’s ‘must-have’, though – and the hype around the Model X is almost entirely justified. Not only is it a quirky family SUV, its low running costs should help make the maths add up, while the gadgets on offer will never get boring. 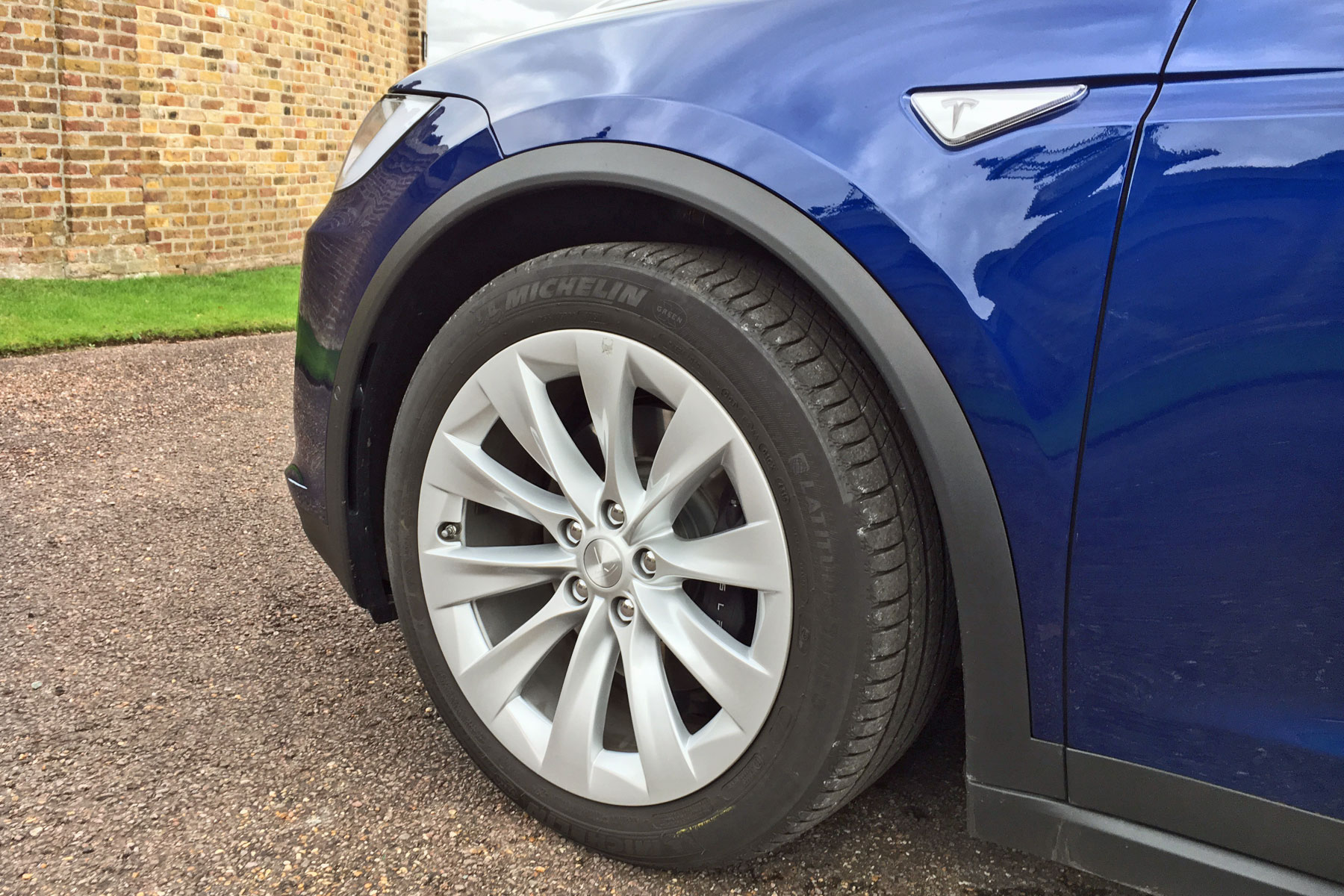 If you are tempted by a Tesla Model X, we’d suggest getting your order in as soon as possible. Not only will those ordered in 2017 lose the right to free Supercharging, but new VED bands from 1 April 2017 will mean you’ll have to pay £310 a year road tax for the first five years. Register it before then and it’ll be free.