Making its debut at CES 2019, the new Mercedes-Benz brings an unprecedented level of tech to the compact class. Here's what you need to know 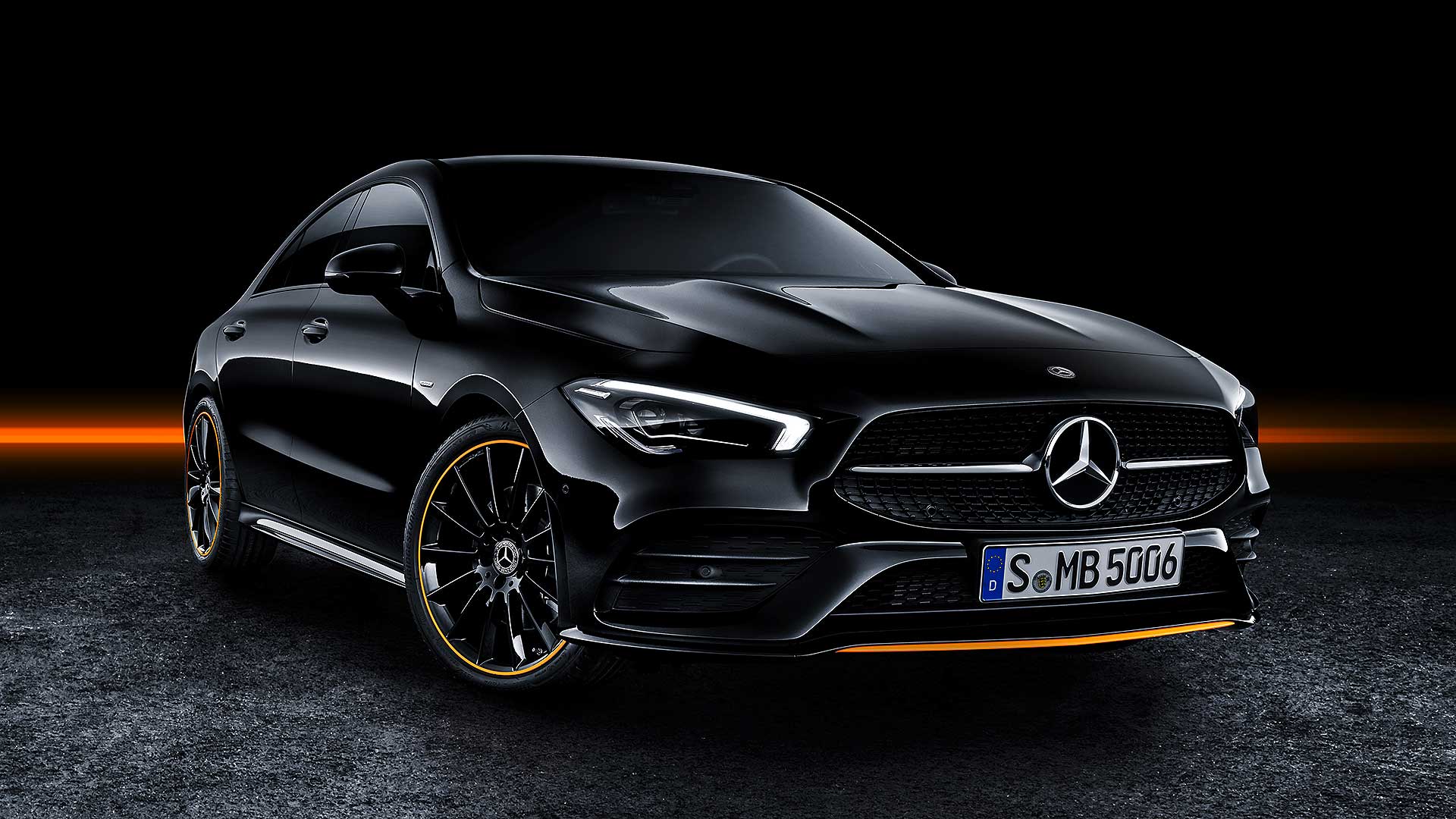 First, the car itself. Consider this the four-door coupe version of the acclaimed Mercedes-Benz A-Class. The previous one was popular; Mercedes-Benz sold 750,000 of them, mainly to people who’d never owned a Merc before. Those buyers are typically 10 years younger than the average Mercedes customer, too. The firm is targeting more of the same this time. 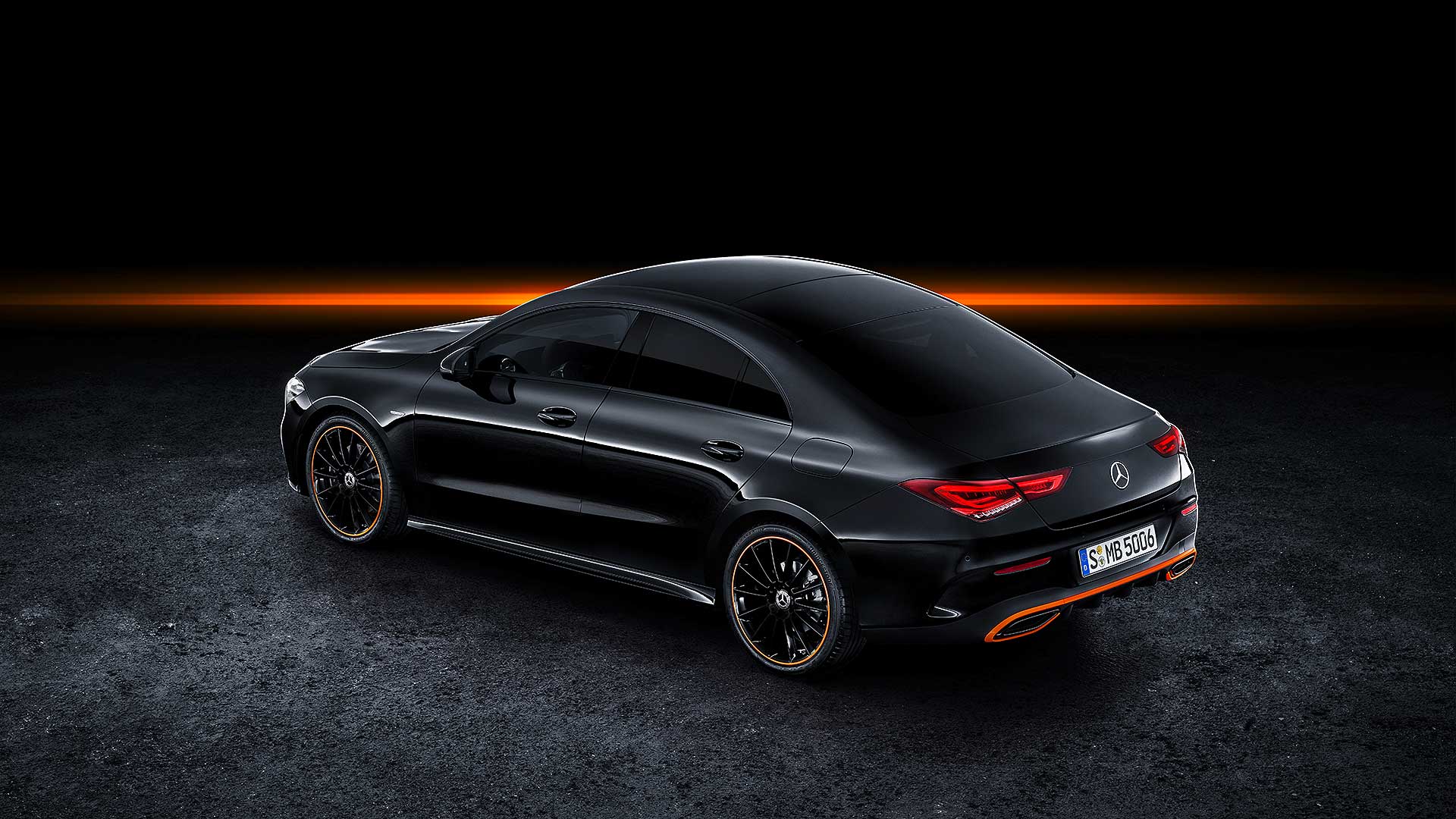 The fact the new CLA is even sportier than the original should help. It’s longer, wider and a bit lower-slung, and Mercedes has worked hard to make the rear end smoother-flowing and less awkward. It’s tried to give it the ‘long-nose’ look of a proper GT, which isn’t easy to achieve on a compact car, but the balance is better here than the original. 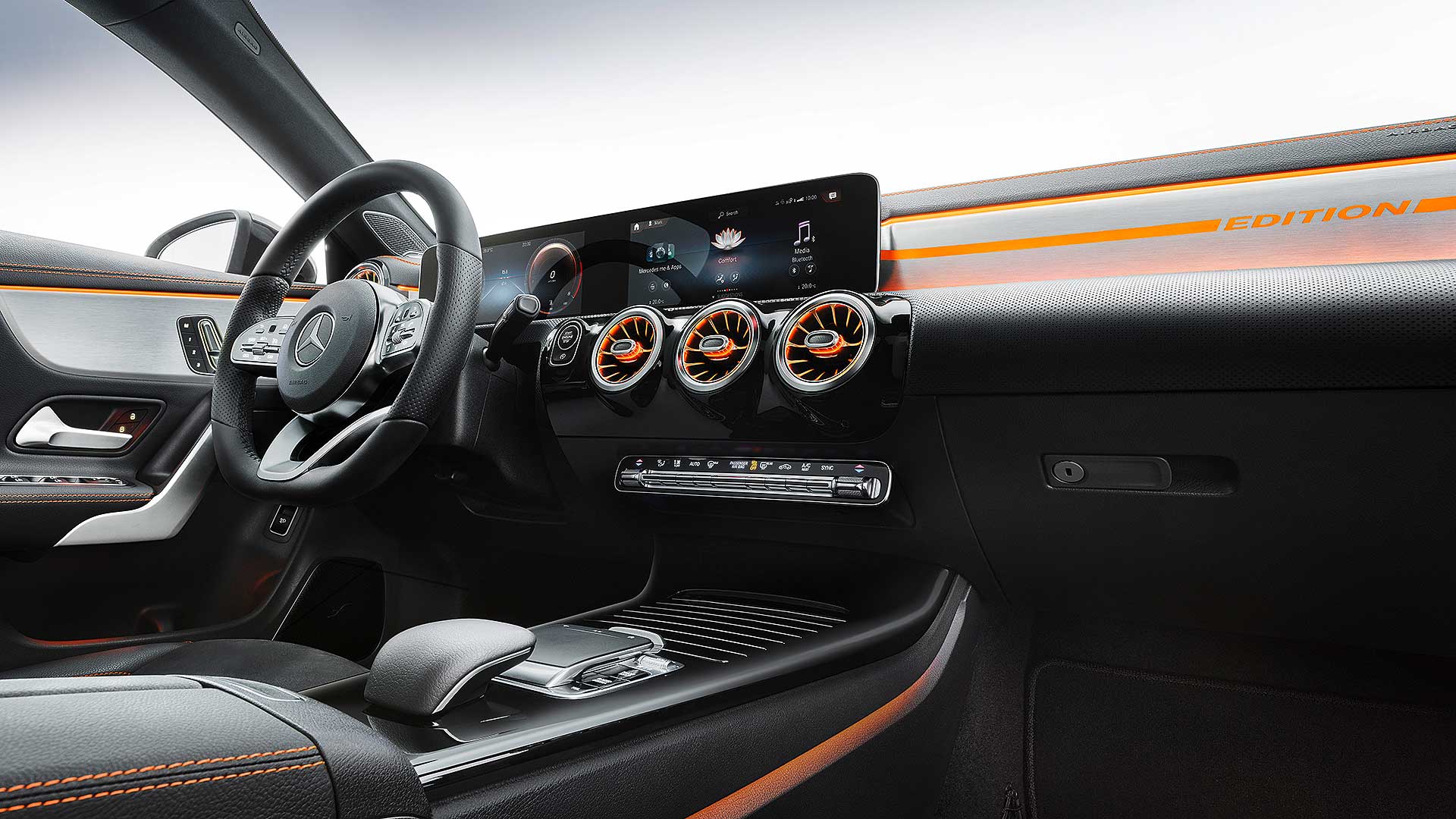 Inside, it has the same open-plan architecture as the A-Class, complete with freestanding dual widescreen displays. With extra emphasis on sportiness and jewel-like detailing, the wow-factor is upped even more. The CES crowds are going to love it.

Underneath, it’s all A-Class, albeit with a lower centre of gravity and wider tracks front and rear. The suspension is firmed up accordingly (electronically controlled adaptive suspension is optional) and we’re told it will be the sportiest of all Merc’s compact-class cars. Wheels? From 16 inches to 19 inches. Of course, you really need the 19s. 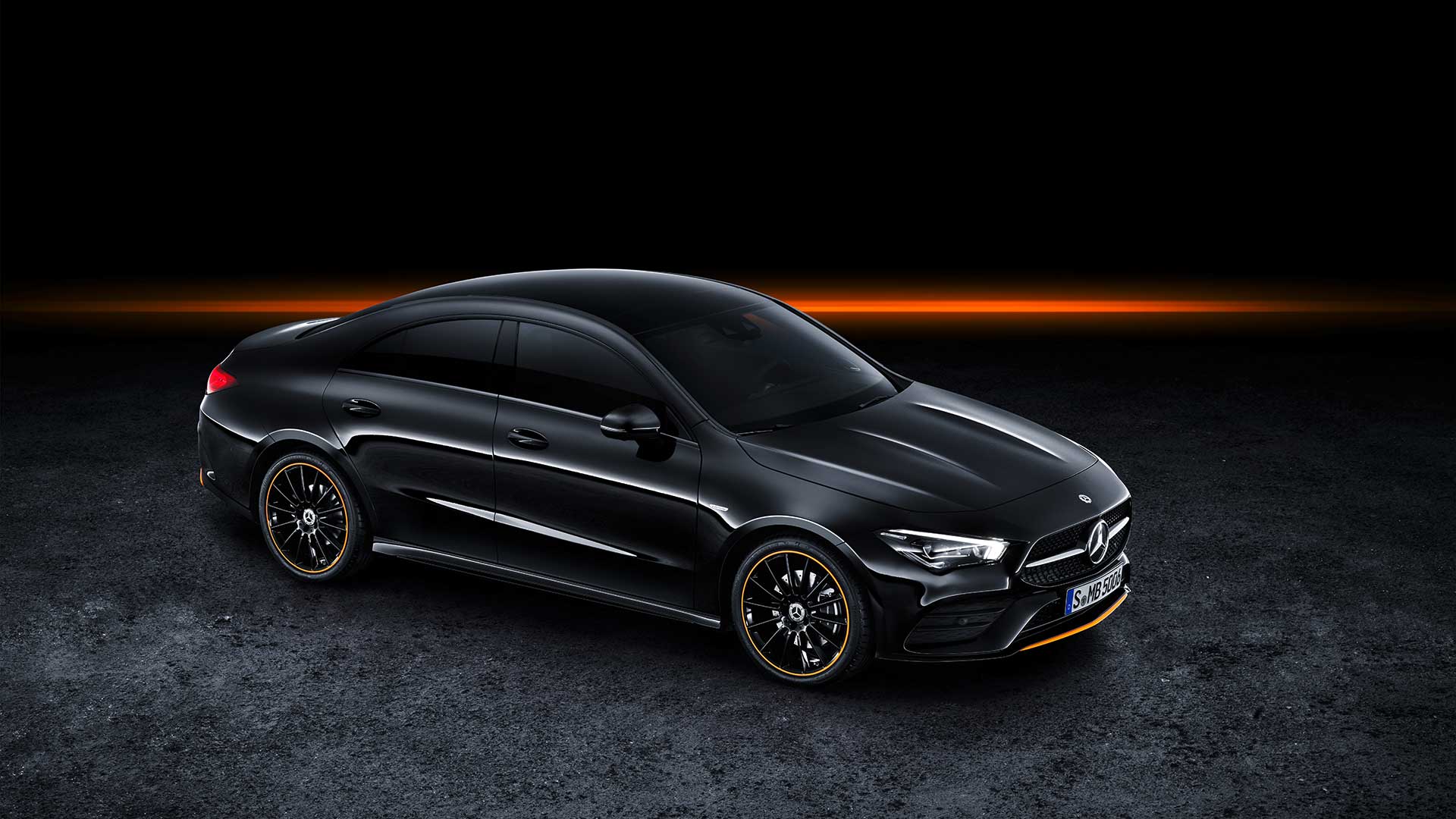 The engine is a four-cylinder turbo that puts out 225hp and drives the front wheels via a DCT automatic gearbox. More engines will filter through in due course. But engines are immaterial: the new Mercedes-Benz CLA is all about the tech. 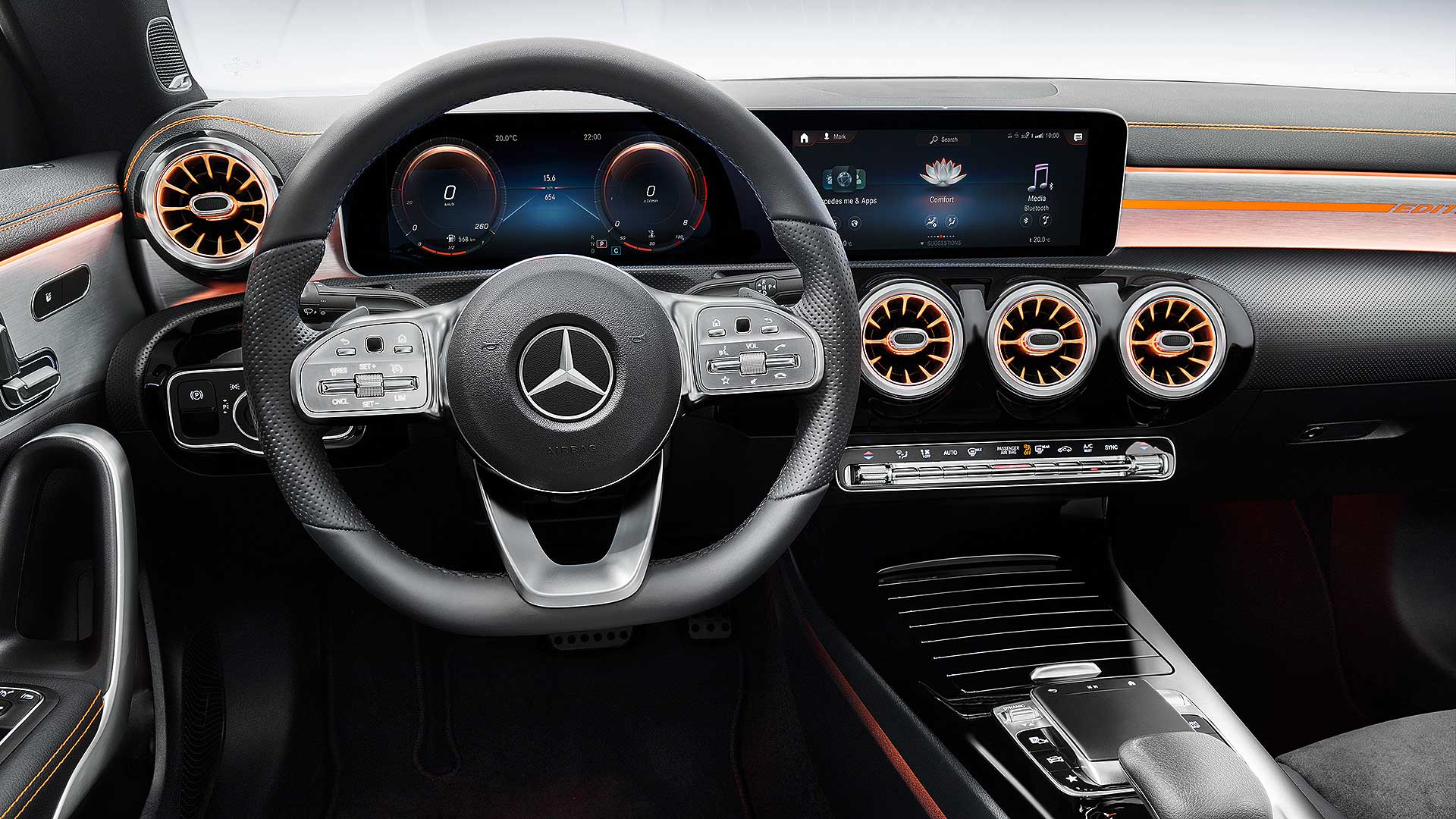 The dual screens are built around the new MBUX architecture, and the CLA introduces the next development of that, called MBUX Interior Assist. This introduces gesture control, but don’t worry – it’s a step beyond the rather rubbish systems we’ve seen from brands such as BMW up to know.

For starters, it works in both sunlight and darkness. Raise your hand towards the interior mirror and the reading lamp comes on, reach over to the passenger seat and the area is illuminated, turning off again when your hand moves away. It recognises which passenger is gesturing, too – so an animated passenger won’t inadvertently turn the stereo volume up. 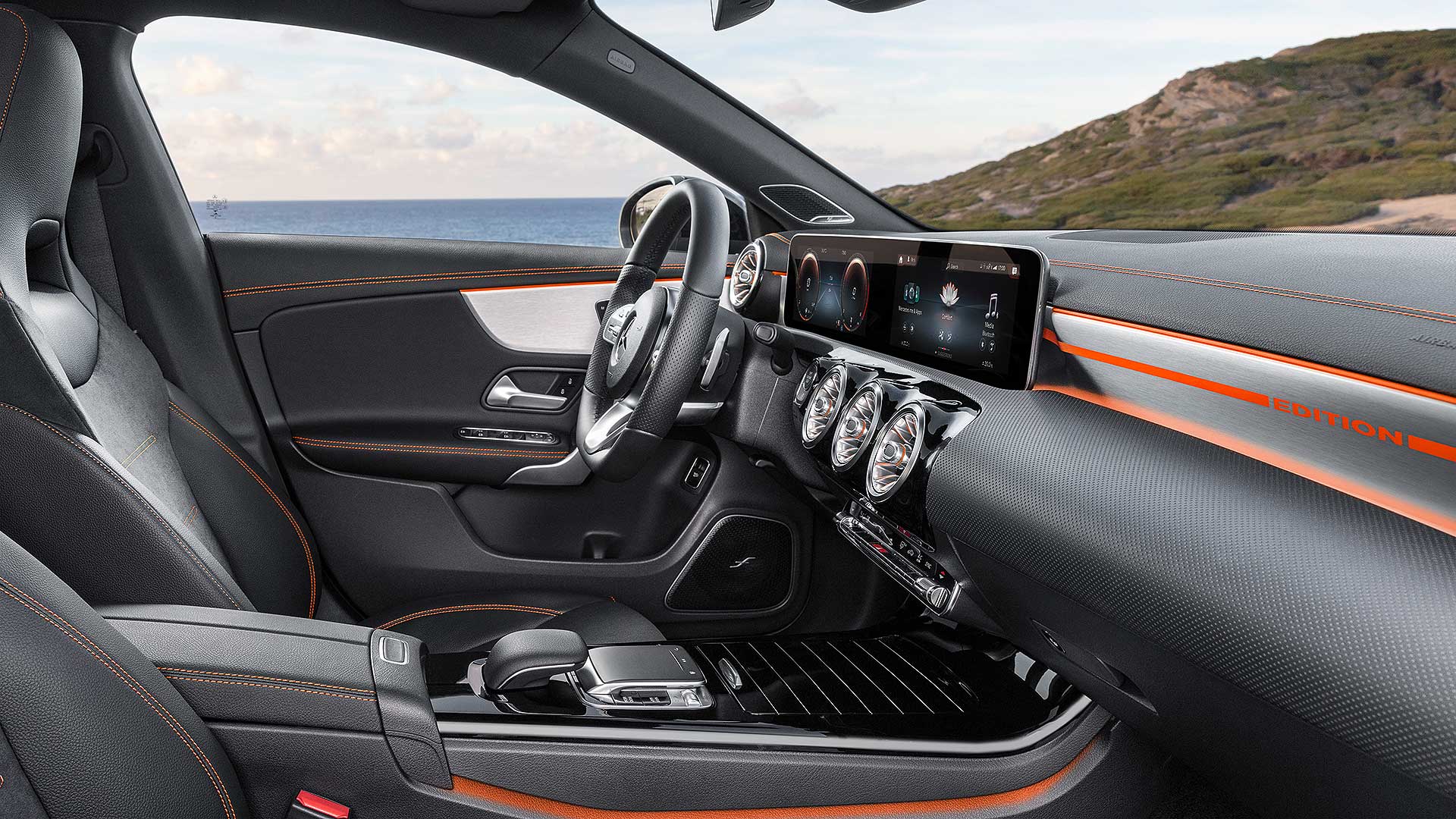 There are gesture control ‘favourites’ too. Spread index and middle finger in a v-shape over the centre console (flick it the v-sign?) and commands can be stored – such as, ‘navigate me home’. Again, driver and passenger can have their own favourite commands.

“We are now igniting the next level with an intelligent interior assistance system for the compact class,” said R&D chief Ola Kallenius. “By recognising gestures, it facilitates natural operation. 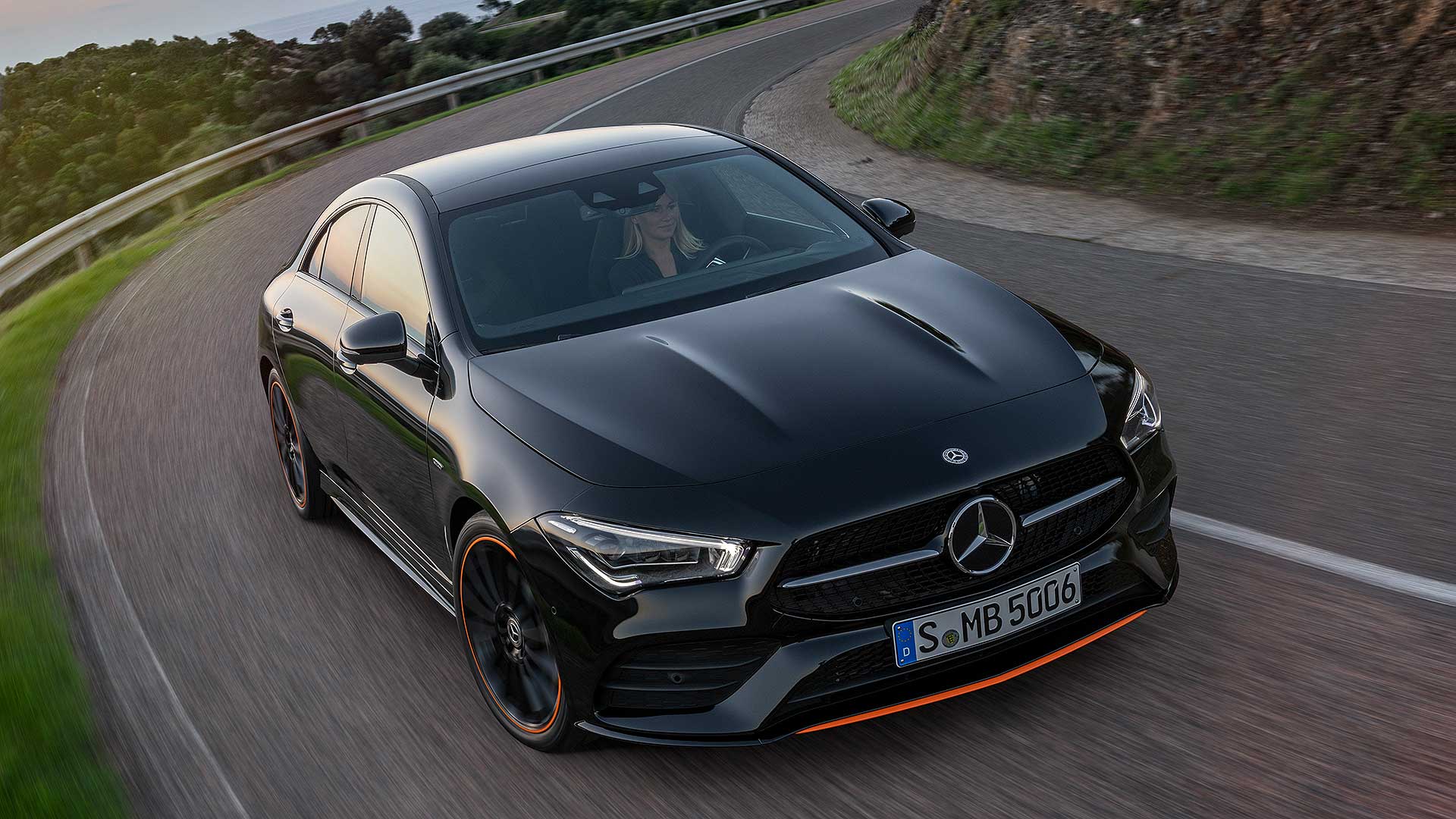 Voice control has also been developed. Part of the MBUX User Experience, saying “Hey Mercedes” now works on much more complex queries than the launch system on the A-Class.

You can, reckons Mercedes-Benz, say, “Which child-friendly Asian restaurants are nearby that are neither Chinese nor Japanese?” and it will find just the place for you. You can ask it sport questions, stock exchange questions (“How has the Apple share price performed compared to Microsoft?”), even get it to do calculations (“What is the square root of three?”). 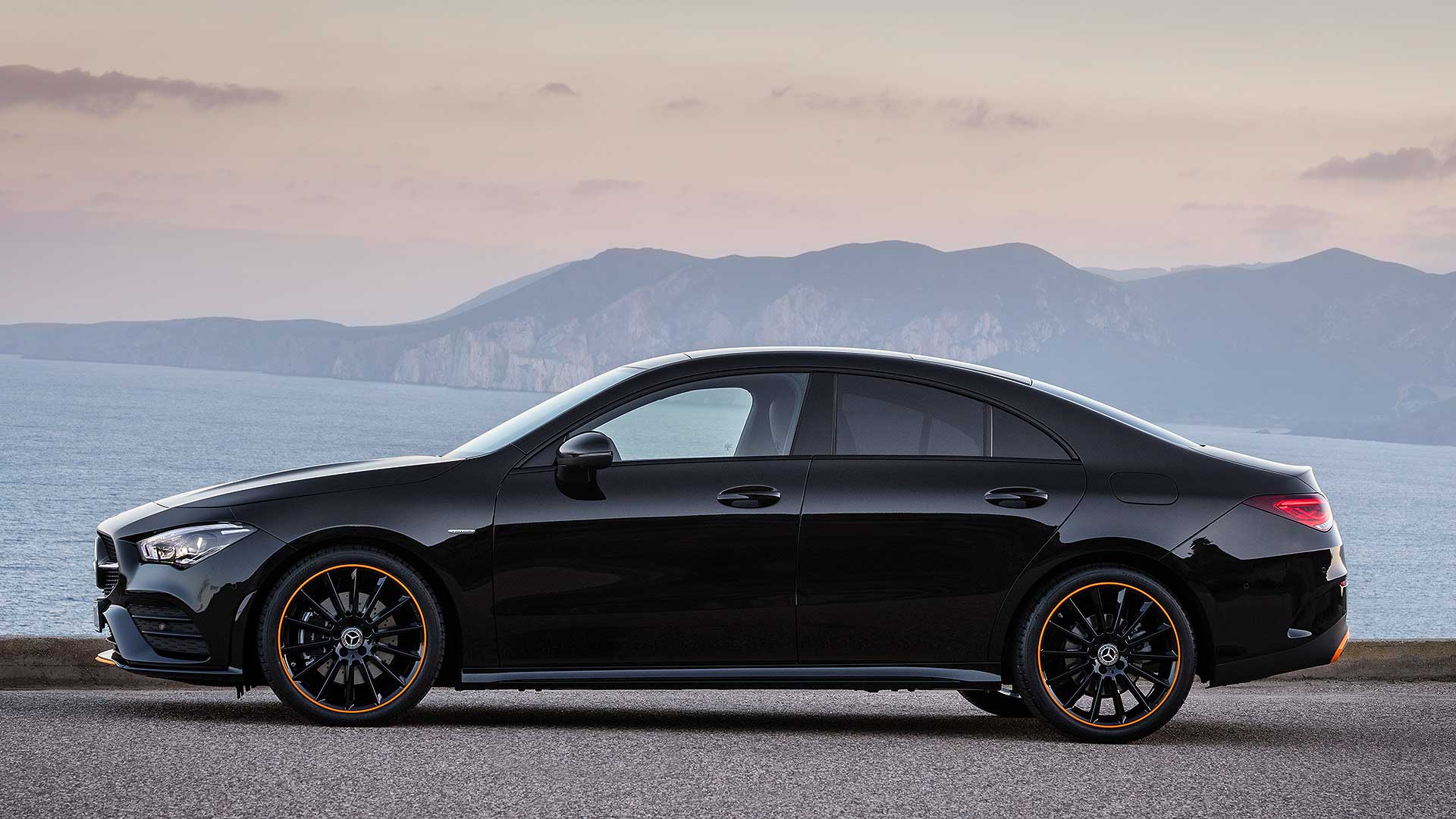 If you’re really keen, ask Hey Mercedes general knowledge questions. It really can, if you want, tell you the fat content of avocados, or the size of Texas. Coming to America first, other markets will follow with this next-level functionality in due course.

Oh, and if you have passengers in the car, they don’t need to zip it when you’re talking to your Mercedes: the system has been trained to respond only to the commands of the person who last said “Hey Mercedes”. 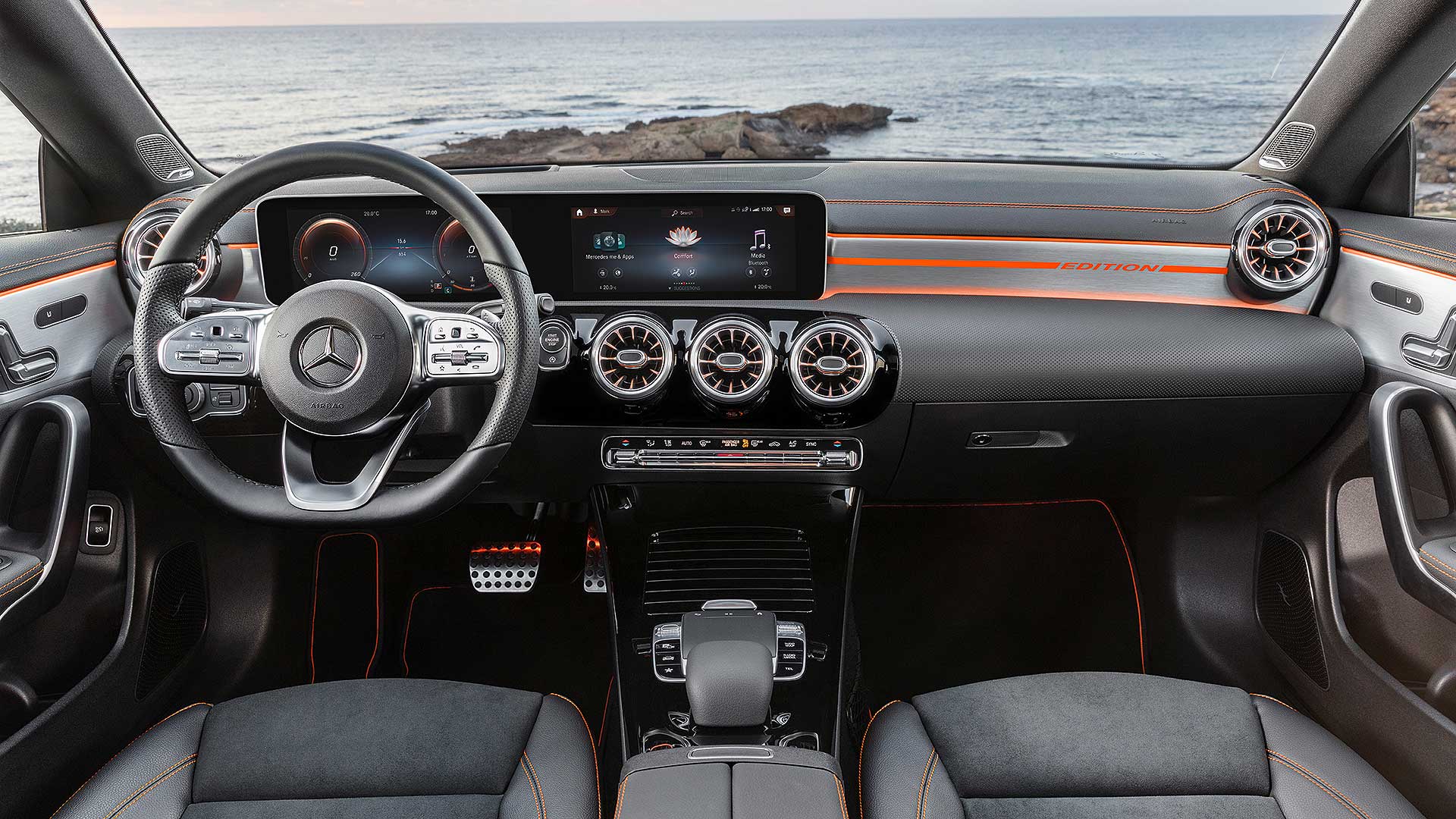 What else? The so-called Mercedes-Benz ‘Energizing Coach’ connects to a Garmin wearable device and logs stats such as stress level, pulse rate or quality of sleep. It duly adjusts the air-con, seat massage, lighting and music to give a bespoke ‘wellness’ mood tailored to both an individual and a situation.

“The aim is for passengers to feel well and relaxed even during demanding or monotonous journeys,” says Mercedes-Benz. Presumably, if a driver hasn’t had much sleep, the air con chills and blasts accordingly, to keep them sharp. 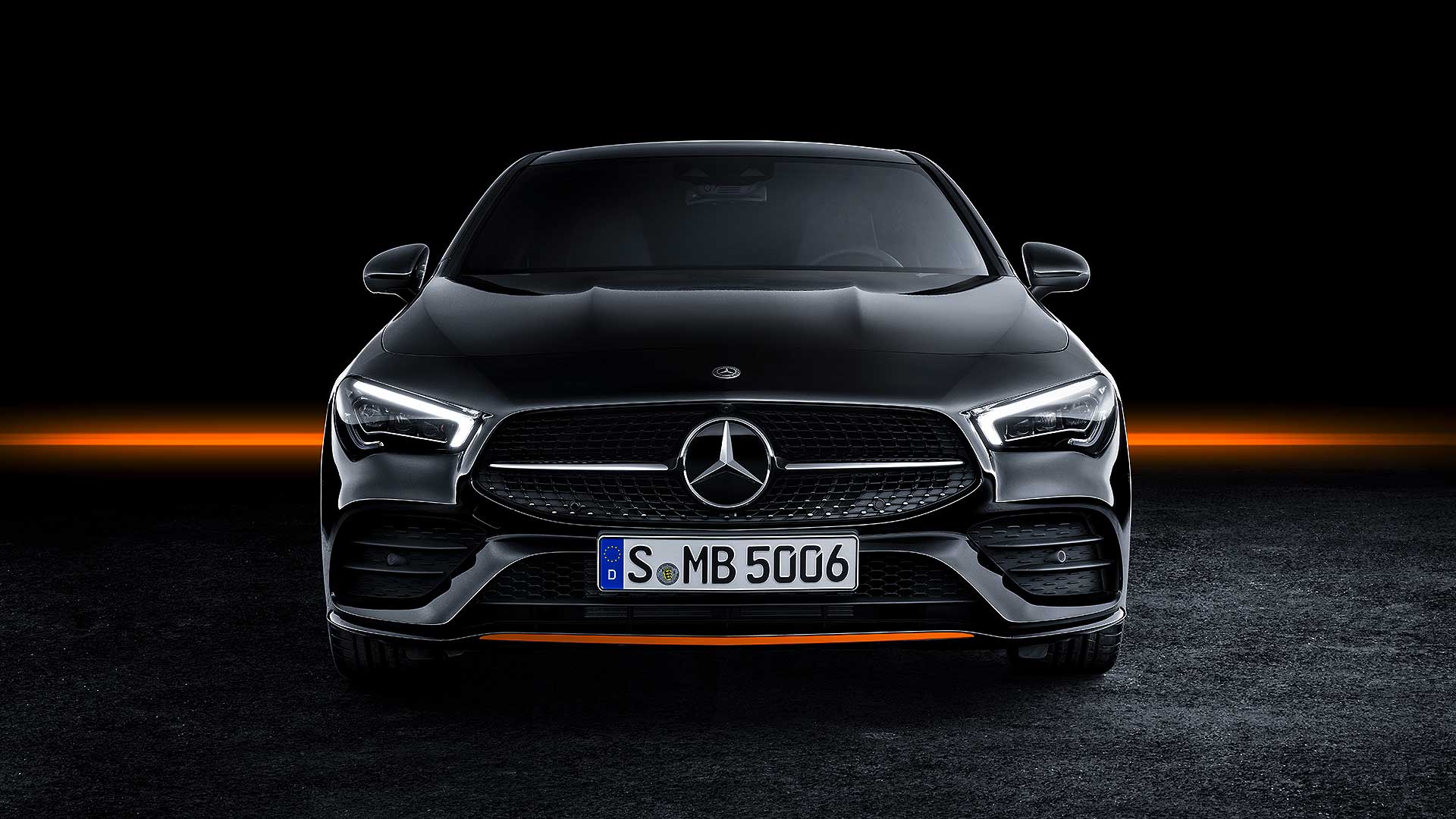 Mercedes-Benz is even launching a special Vivoactive 3 Garmin smartwatch at CES to link up with it.

After being shown at CES 2019, Mercedes-Benz will ship the new CLA to other auto shows in the build-up to its market launch in May. The firm says it “sets new benchmarks for the compact class”. It certainly packs in plenty of tech for the CES faithful to get their teeth into.

The new Vauxhall Mokka is on sale now with first deliveries beginning in April 2021. There is also a new Mokka-e EV with a 201-mile range
Read more
Previous articleCupra Ateca 2019 review: the Porsche-baiting SUV from Spain
Next articleLonger-range Nissan Leaf with 62kWh battery confirmed

The number of people buying into ultra low emission vehicles (ULEV) in London has increased by a multiple of four, but there's still a long way to go
Read more

We drive the Nurburgring-honed Toyota Yaris GRMN. Is this the new king of the pocket rockets?
Read more

Consumer loyalty card Nectar has moved from long-time partner BP to Esso for fuel-purchase points. The decision has been controversial, however.
Read more

As Morgan waves goodbye to its V8 models, it can also count its £3.4million pre-tax profits
Read more

Motorists spend £56,000 on petrol during their lifetime

The average motorist will spend more than £56,000 on petrol during their lifetime, which might explain why 40 percent of drivers are considering an EV.
Read more
Car Reviews

New car registrations were down 4.6 percent in May 2019 – with diesel plummeting 18.3 percent to take a market share well under 30 percent
Read more
Car News

Built like a Baja racer, the new Ranger Raptor is Ford of Europe’s toughest truck. We head for the dunes to see what U.S. buyers are missing
Read more