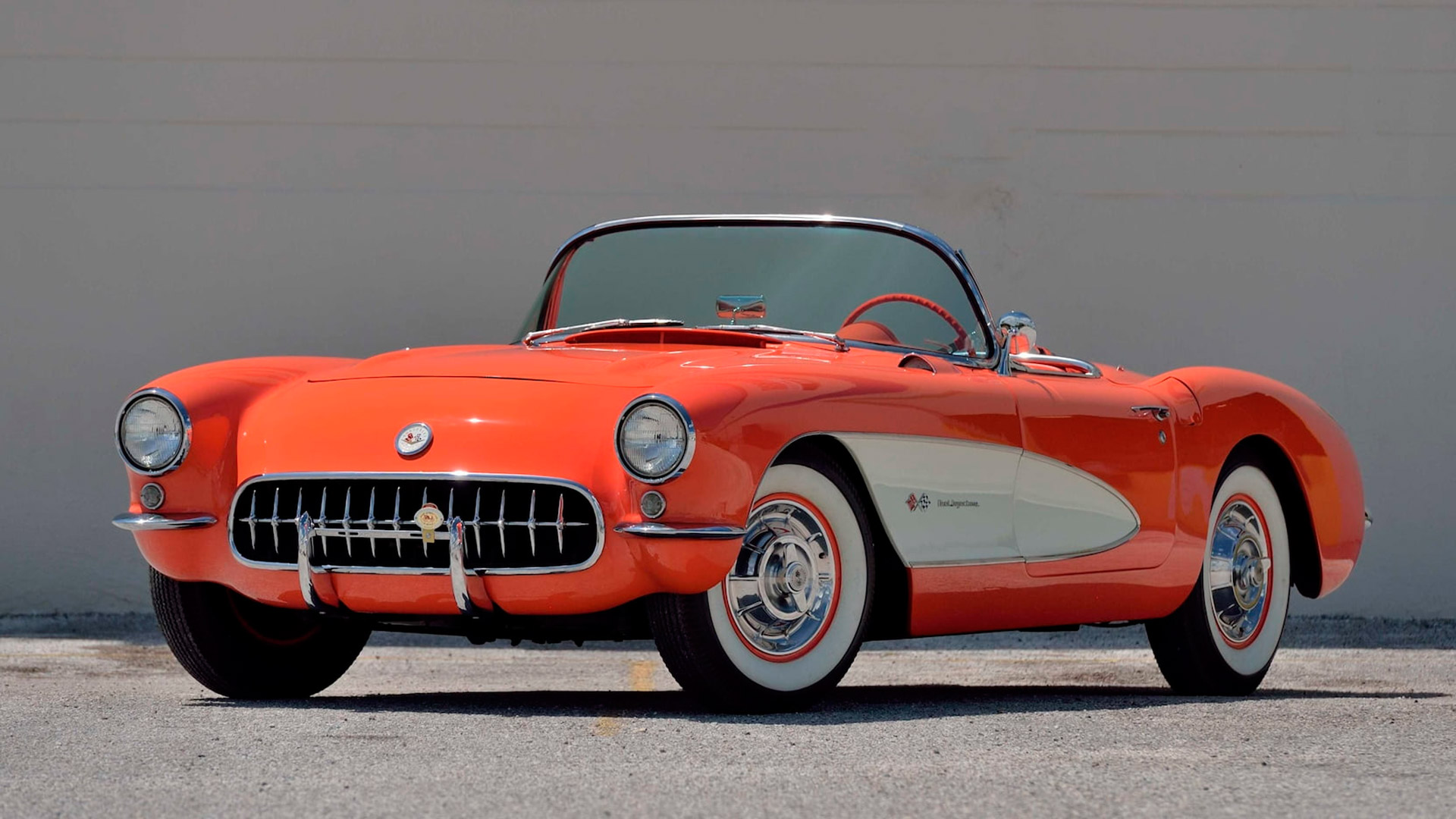 The automotive world has been whipped into a frenzy about the radical new mid-engined 2020 C8 Chevrolet Corvette Stingray.

However, if you are of the firm belief that a Corvette should only be front-engined, then the forthcoming Mecum Harrisburg auction is for you.

More than 1,200 vehicles will cross the block in the epic four day event, held at the Pennsylvania Farm Show Complex.

Amongst them are representatives from almost all of the previous classic Corvette generations, including the ones we have picked out below. 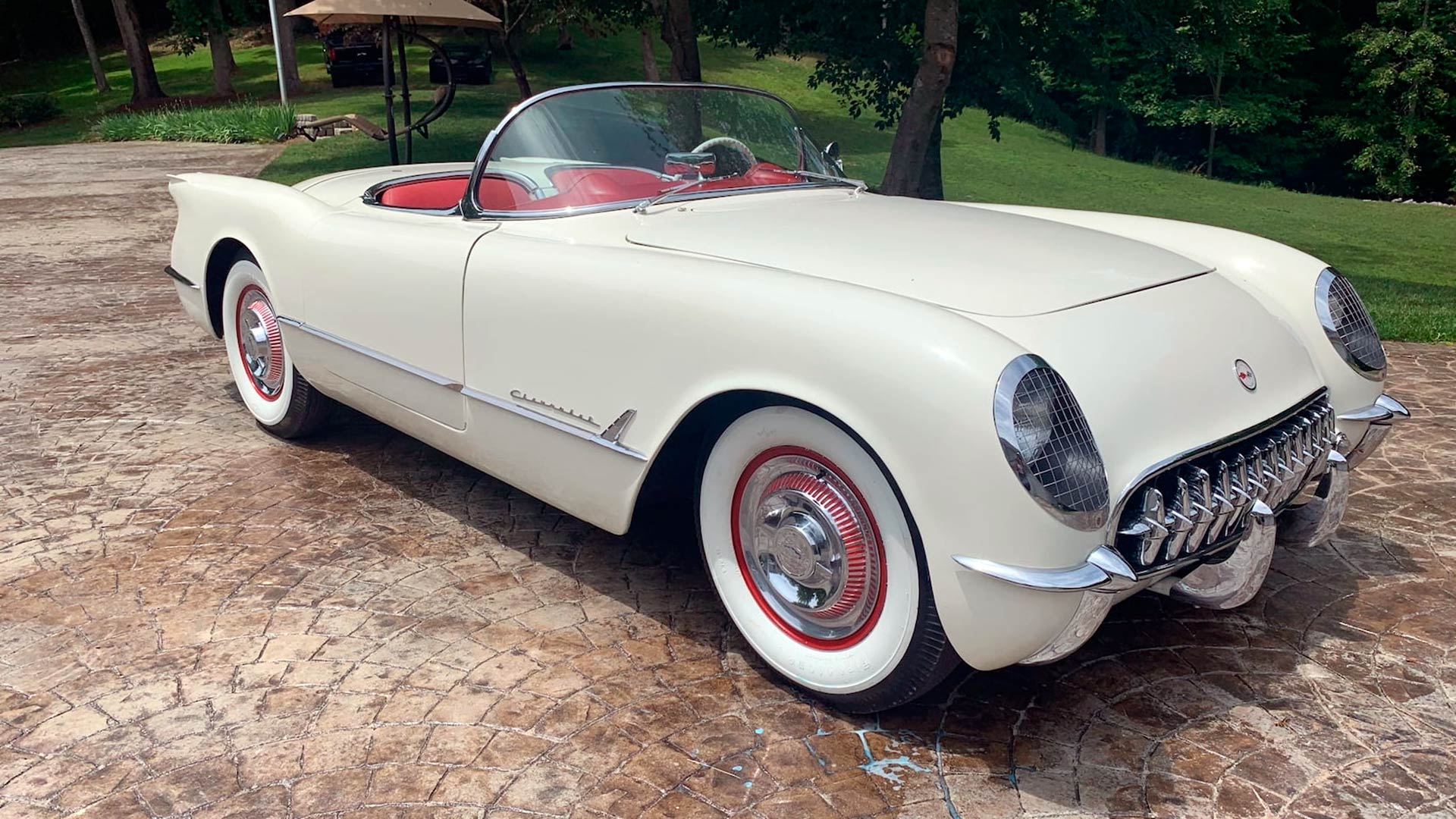 What better place to start than with an early example of the first-generation Corvette. With 1954 marking the first full year of ‘Vette production, more than 3,600 rolled off the production line.

Details on this exact car heading for sale are slim. The modest ‘Blue Flame’ inline-six engine and two-speed automatic gearbox, as fitted when new, are both present though. A Polo White exterior is complemented by a red interior, both of which look to be in great condition.

Whilst it may not be the fastest Corvette, an early C1 is where the legend began. 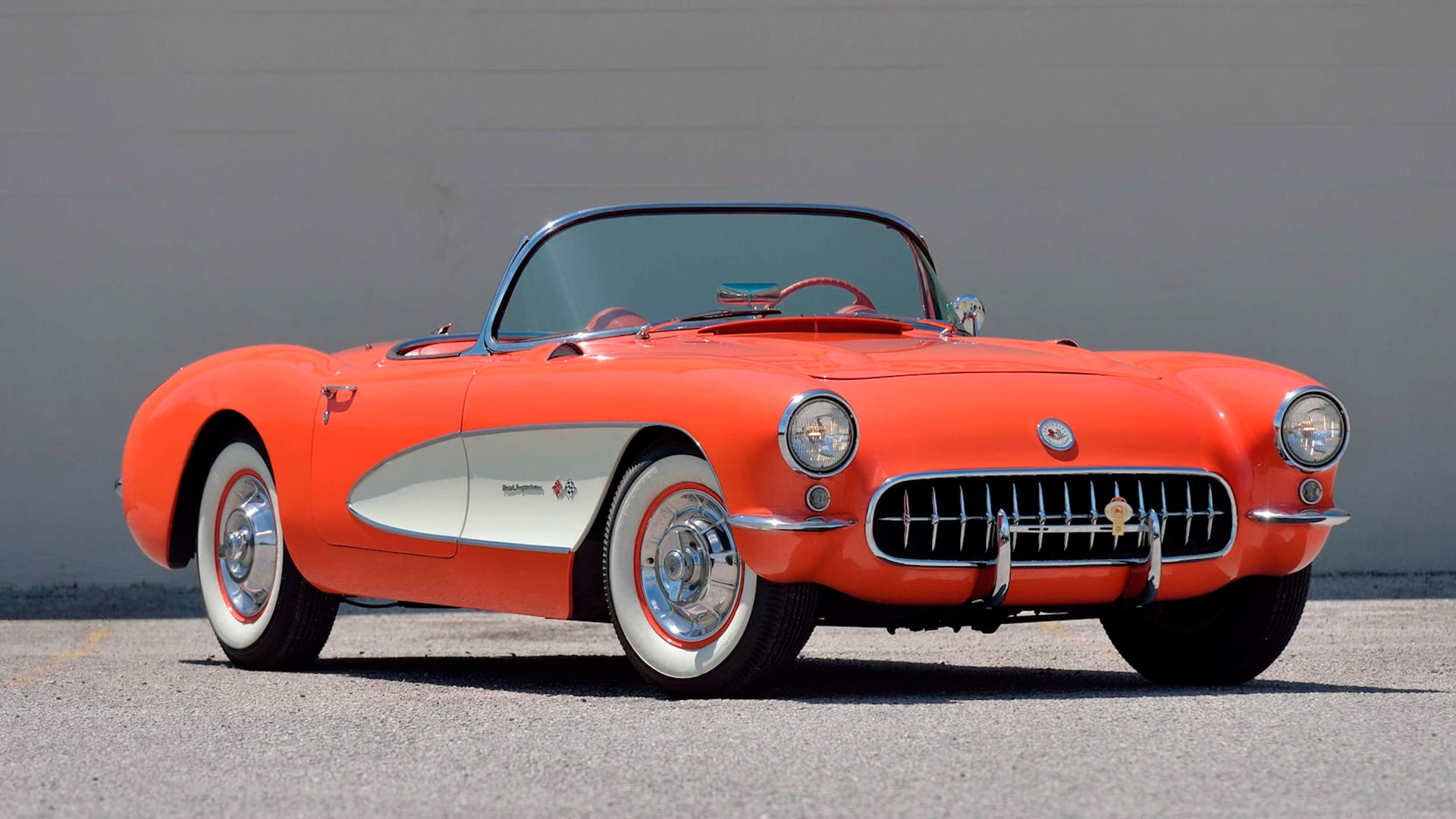 If you want your C1 Corvette with an extra dose of performance, this car features the fuel-injected 283-cubic inch V-8 engine with 250 horsepower. It represents one of just 484 ‘Vettes sold in 1957 with the fuelie motor.

Other technical highlights include the rare four-speed manual transmission, combined with the optional Positraction differential. Wide whitewall rubber, and a hardtop, are also included.

Painted in distinctive Venetian Red, this C1 forms part of the Todd Werner Collection up for sale in Harrisburg. It should also be noted that this car won was an AACA National Senior Award winner in 2015. 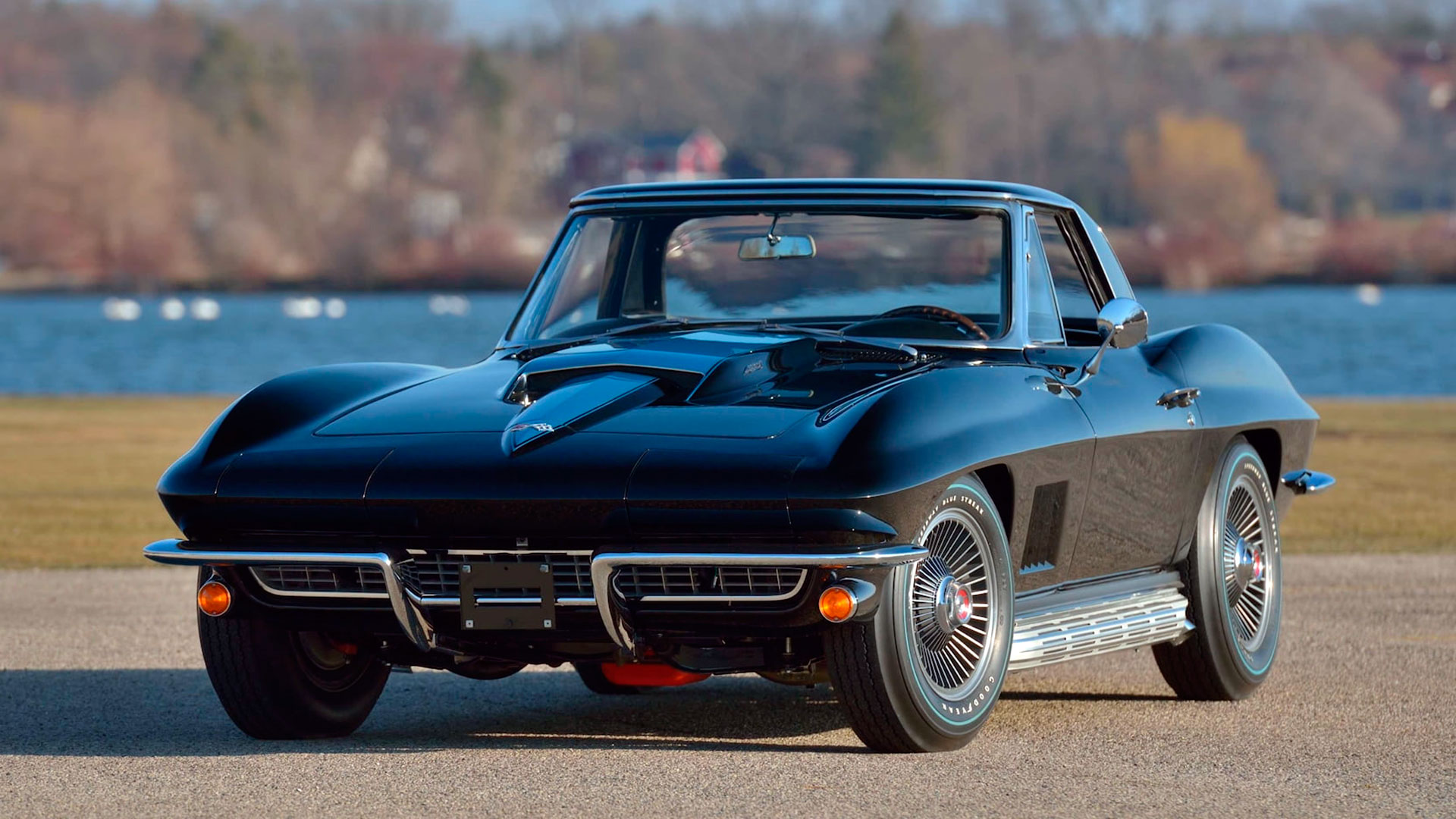 This Corvette is so collectable that Mecum Auctions have produced a special booklet to explain the significance of it. Fame comes from the fact this was the first C2 Corvette to be fitted with the legendary ROP L88 option – meaning the 427-cubic inch V-8 engine lurks beneath the hood.

Casually rated with an output of 430 horsepower, the L88 was a thinly disguised racing engine, with the true performance estimated to be much higher. It made this particular car the perfect foundation for Tony DeLorenzo to go sports car racing.

DeLorenzo would go on to become one of the most successful Corvette racers, and won the 1967 SCCA National D Production Championship with this car. In later years it has won countless show awards, and stands as a serious piece of Corvette history. 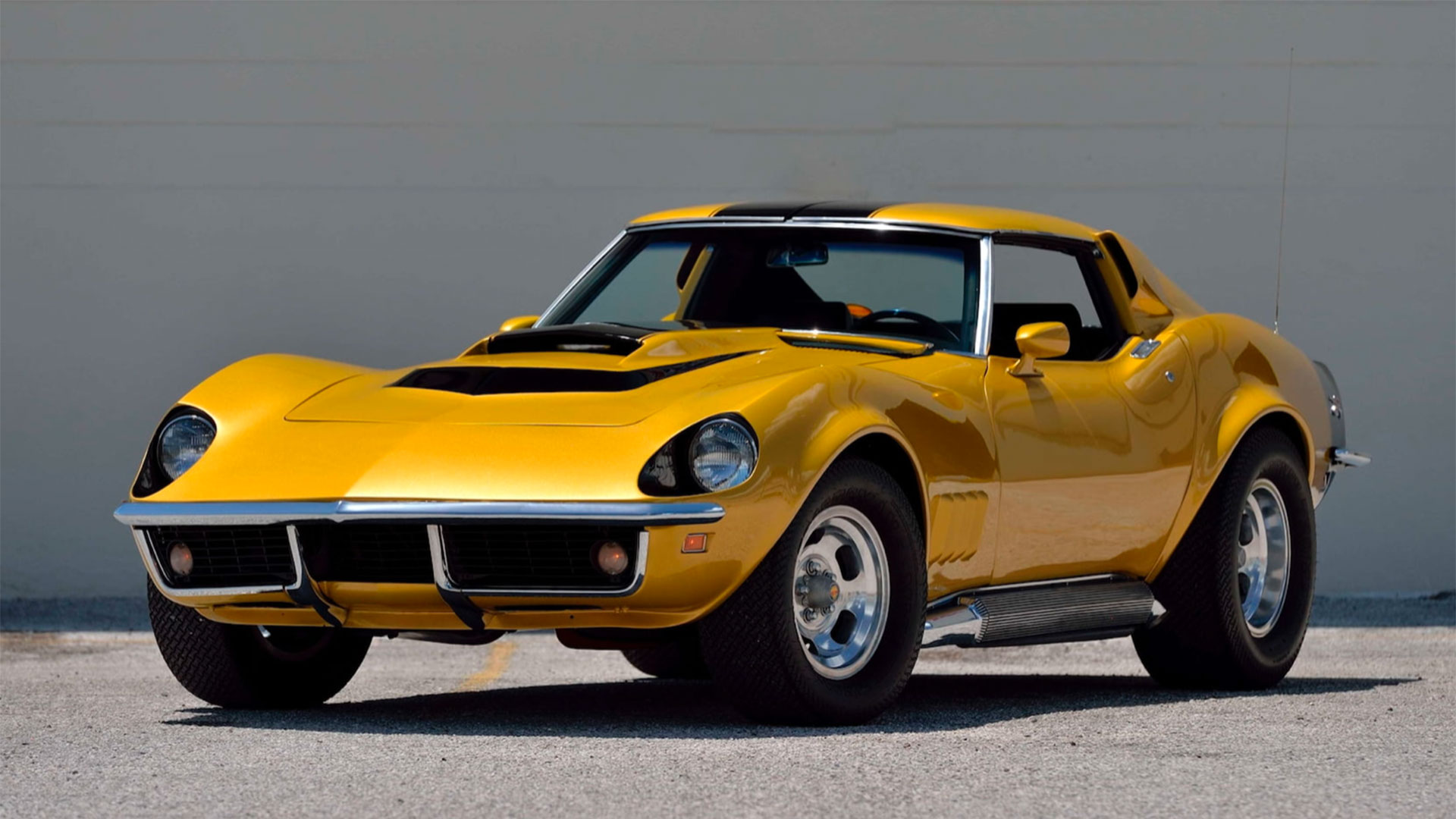 One of just ten created by Motion Performance, this ultra-rare C3 also features an, albeit modified, 427-cubic inch engine under the customized bodywork.

The black and gold color scheme, recessed headlights, and even Shelby-esque air scoops made this a distinctive machine. Aggressive side-exit exhausts complete the visual overhaul, with a black interior also part of the package.

Featured on the cover of ‘Supercar Magazine’ in 1970, this ‘Vette has also appeared in a book documenting the history of Baldwin-Motion. As part of the Todd Werner Collection, a host of important documents – including the NCRS Shipping Data Report – come with the car. 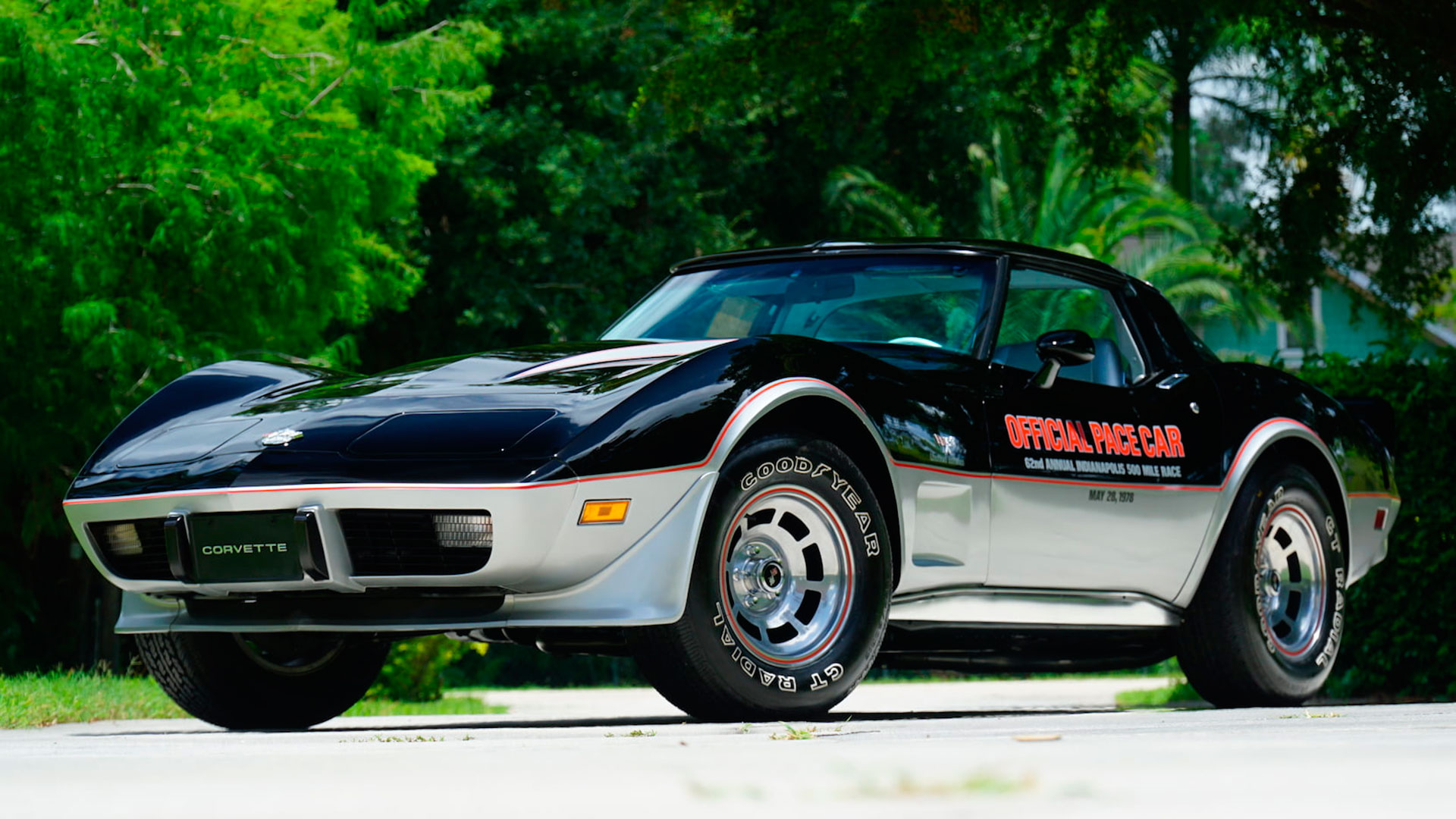 With more than 6,500 built, the 1978 Limited Edition Pace Car replica accounted for a sizeable percentage of Corvette production that year. But few will have covered the miniscule mileage that this example has clocked up in four decades.

Just 48 miles have rolled beneath the original Goodyear GT tires, whilst the passenger window still wears the original sales sticker and EPA information. It means the Indy 500 decals look like new, and that the silver leather trim appears untouched.

Chevrolet loaded the Pace Car Edition with options, including air conditioning, power windows, and an AM/FM radio featuring an eight-track tape player. Whoever buys this example is likely to place it into storage, preserving the incredible low mileage. 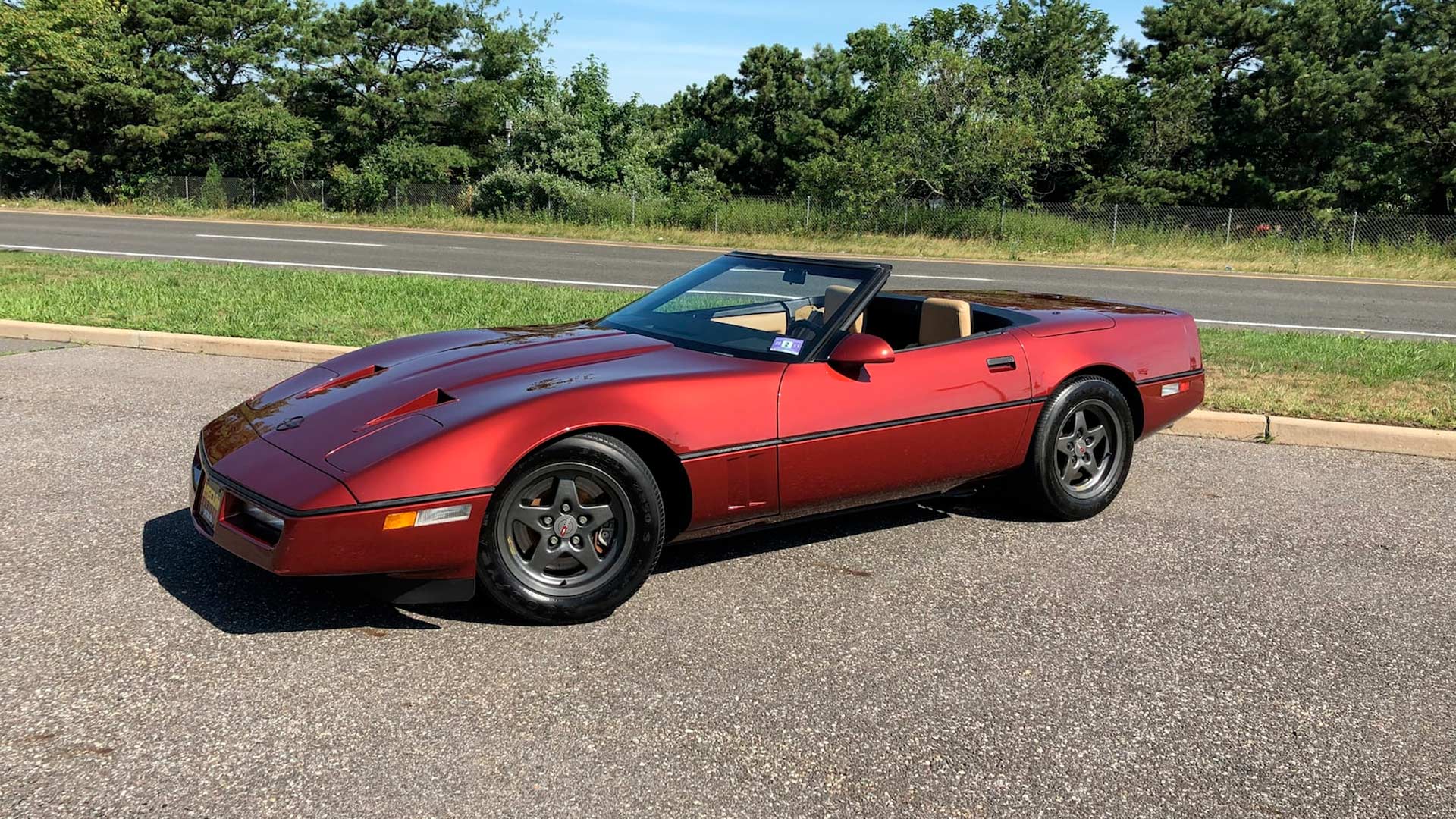 Callaway Twin Turbo versions of the C4 Corvette have become the stuff of legend, and Mecum Harrisburg features one of just 65 convertible examples sold during 1987. This marked the first year customers could tick the ‘B2K’ option when buying a ‘Vette.

Callaway would then add a pair of turbochargers to the 5.7-liter V-8 engine, boosting output to an impressive 345 horsepower. As an official Chevrolet-approved conversion, the factory warranty still remained intact.

Owned by just one person since new, this Callaway Corvette has covered 17,000 miles. It wears a set of 16-inch Dymag wheels, which were offered solely for the 1987 model year. 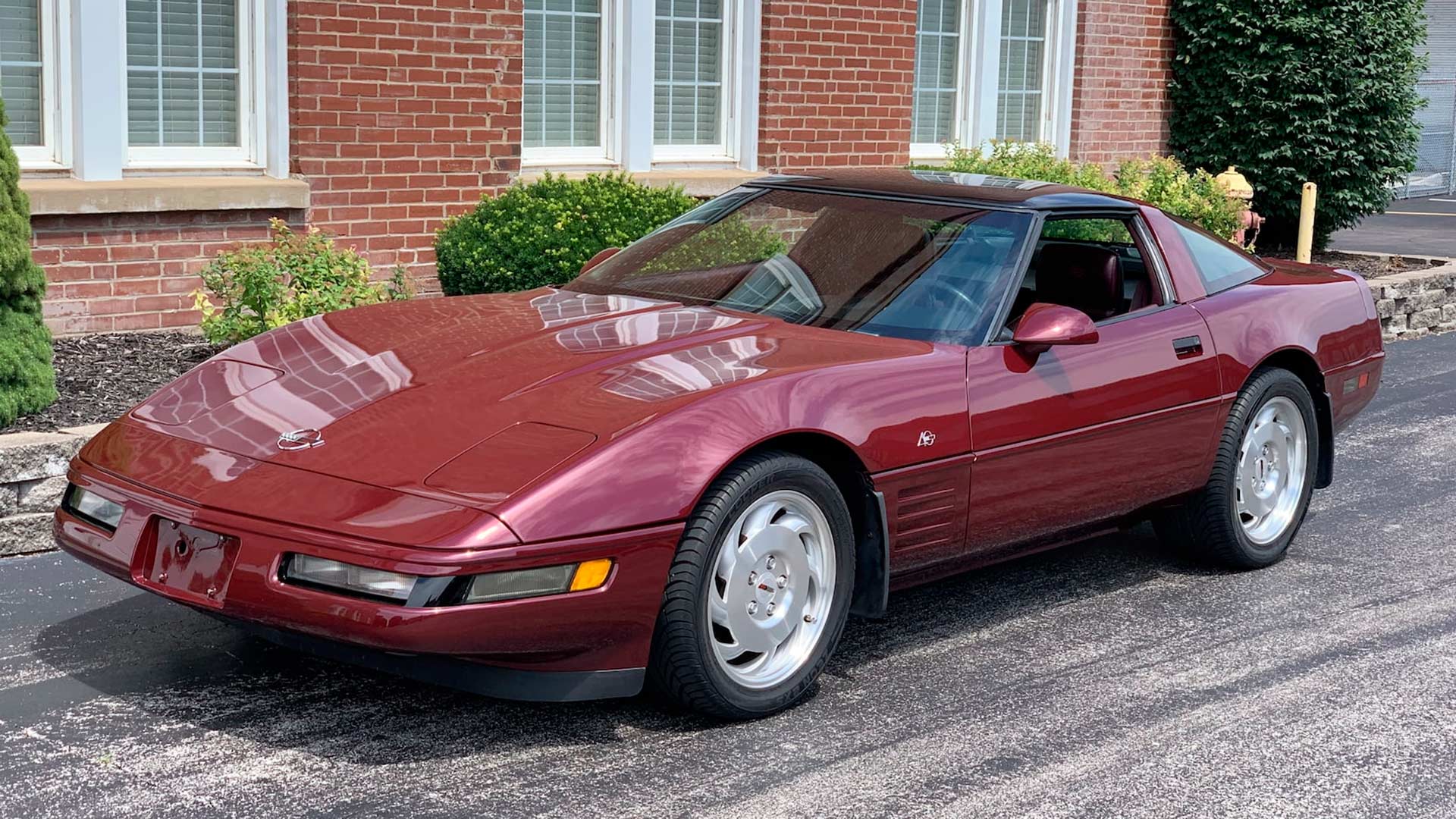 Never one to miss out on a special edition, Chevrolet celebrated the 40th anniversary of the Corvette in style for 1993. Enter ‘Ruby Red’ paintwork, a matching Ruby Red leather, plus extra emblems attached to the car.

Although this car appears to be missing the special Ruby Red wheel centers, it does at least represents a Corvette that has been used. A total of 63,000 miles are recorded on the odometer, with this car featuring the 300 horsepower LT1 5.7-liter V-8 engine and automatic transmission.

This 40th Anniversary Corvette could make for a usable collector car, especially given the rising interest in cars from the late 1980s and early 1990s. 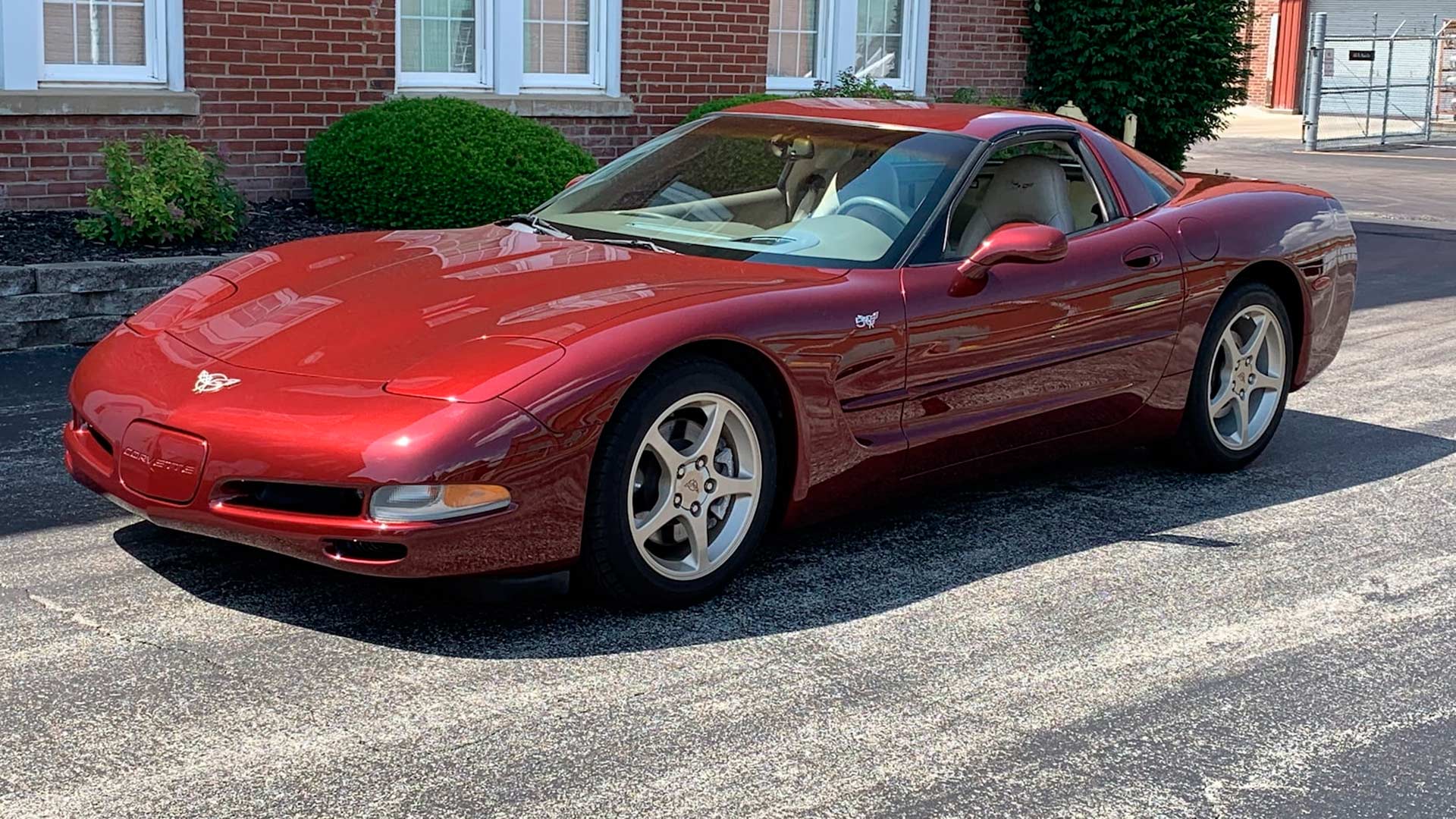 Jump forward a decade and General Motors had dusted off the birthday celebration playbook for the fifth-generation of the Corvette. Marking a half-century of production was done with ‘Anniversary Red’ paintwork, which looked remarkably similar to the C4’s Ruby Red hue.

Producing 350 horsepower, the LS1 5.7-liter V-8 is connected to a six-speed manual transmission. A top speed of 175 mph beckons, and this car has covered some 50,000 miles from new. 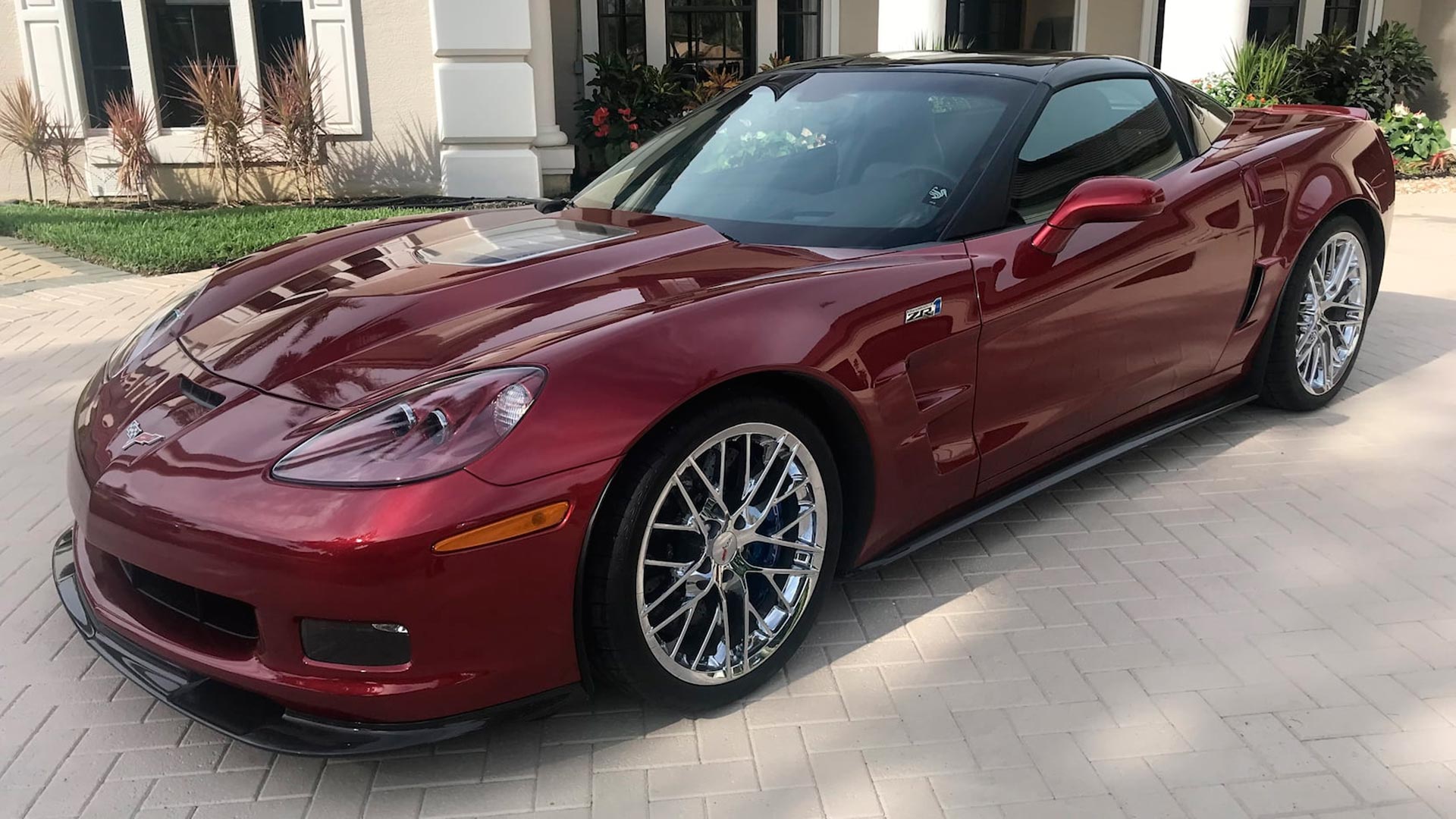 We’ve saved the best until last for our selection, and this immaculate 2011 ZR1 is certainly worth waiting for. Despite the massive performance on offer, somehow the owner of this C6 ‘Vette has accumulated a tiny mileage in eight years.

When buying this ZR1 the owner picked the $10,000 Premium Package, and also added the optional chrome wheels and Crystal Red Metallic paintwork. It all makes for a deeply desirable sixth-generation Corvette.

The action at Mecum Harrisburg kicks off on Wednesday July 31st, and continues all the way to Saturday August 3rd. We expect there will be plenty of buyers adding a new Corvette to their garage over those four days.