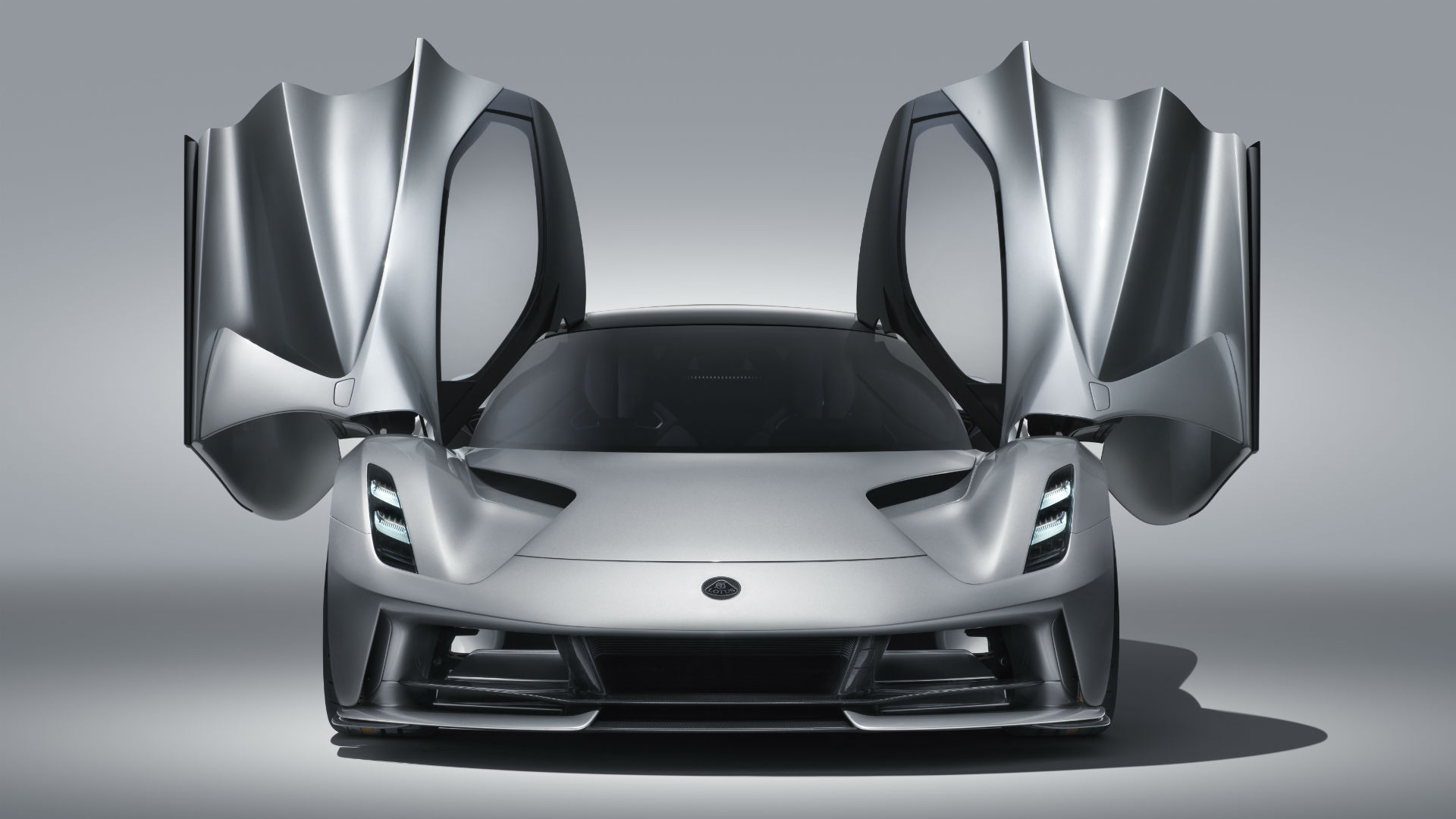 As the drapes drop to reveal the Lotus Evija, a frisson of excitement ripples around the room. Yes, it looks fantastic, yet this is also a decisive moment for Lotus. After 71 years, this British marque, now backed by Chinese money, is poised to become a world player.

The Evija (say it ‘Ev-eye-ya’) is the opening salvo in that reinvention, one that will see Lotus manufacturing cars in China and setting its sights beyond sports cars at saloons, SUVs and more. “In order to make waves, you need to make a splash,” says Lotus CEO Phil Popham. The 2,000hp Evija – the most powerful production car ever – feels like a tsunami.

That power figure outguns even the rival 1,903hp Pininfarina Battista – and the Lotus will be rarer, too. Just 130 examples will be made (hence the car’s ‘Type 130’ codename, priced at around £2 million each. 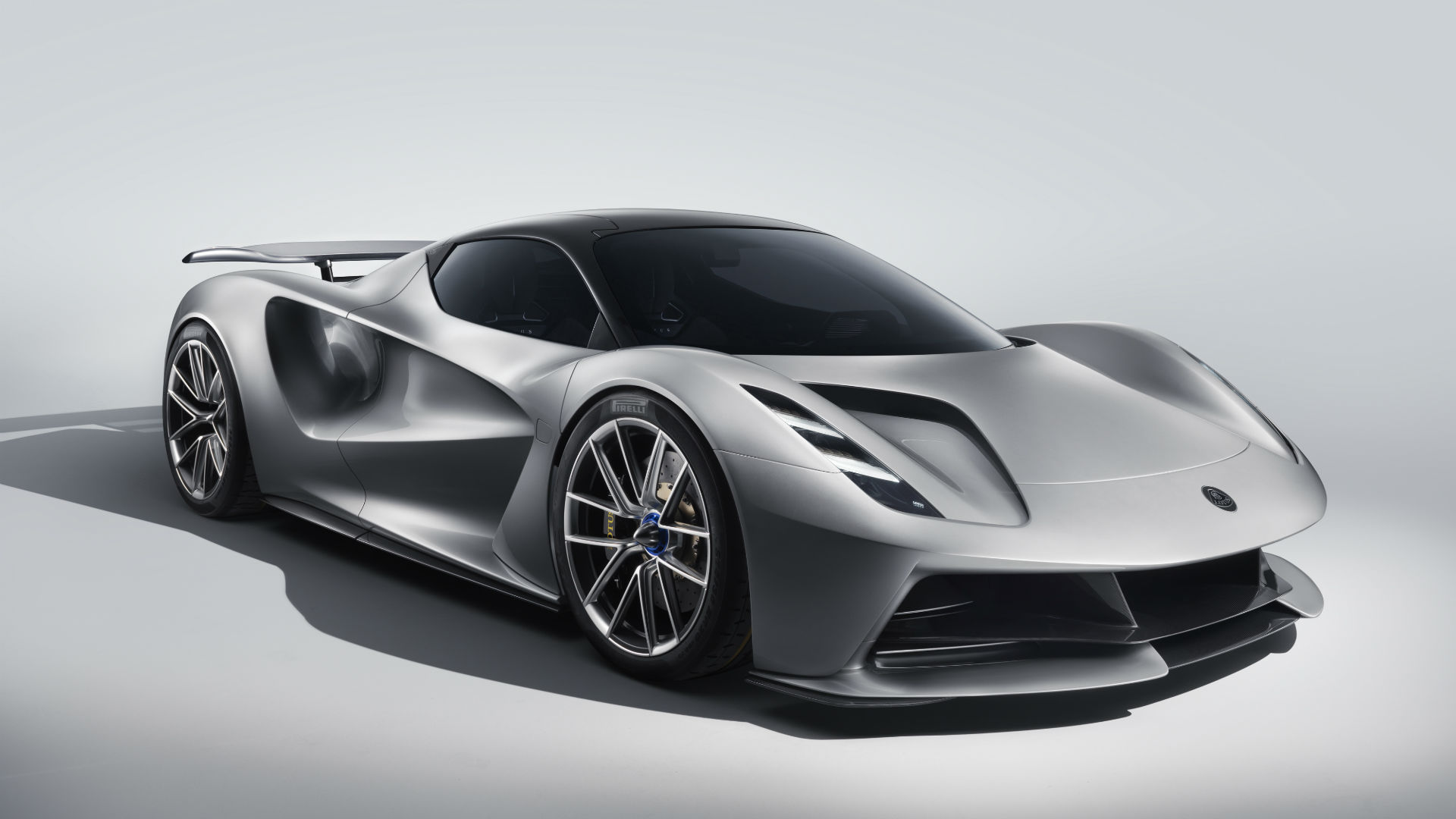 The Evija’s mid-mounted 2,000kW lithium-ion battery was developed with Williams Advanced Engineering and is described as ‘the lightest, most energy dense electric power package ever fitted to a road car’. Lotus is being coy about performance figures, but with just 1,680kg to shift and an almighty 1,254lb ft (1,700Nm) of torque delivered to all four wheels from a standstill, acceleration will be savage.

So, here’s the new 2000hp, £2 million Lotus Evija – the most powerful production car ever.

Rear ‘three-quarter venturis’ are its most distinctive feature – ringed by red LEDs like afterburners. pic.twitter.com/fiLJMjCD8Z

It’s not all future tech, though. Lotus has opted for hydraulic power steering – rather than an electric set-up – for ‘pure steering feel’. “Everything we do is centred on driving enjoyment,” explains Popham. “More than any other brand, that’s what Lotus is about.” 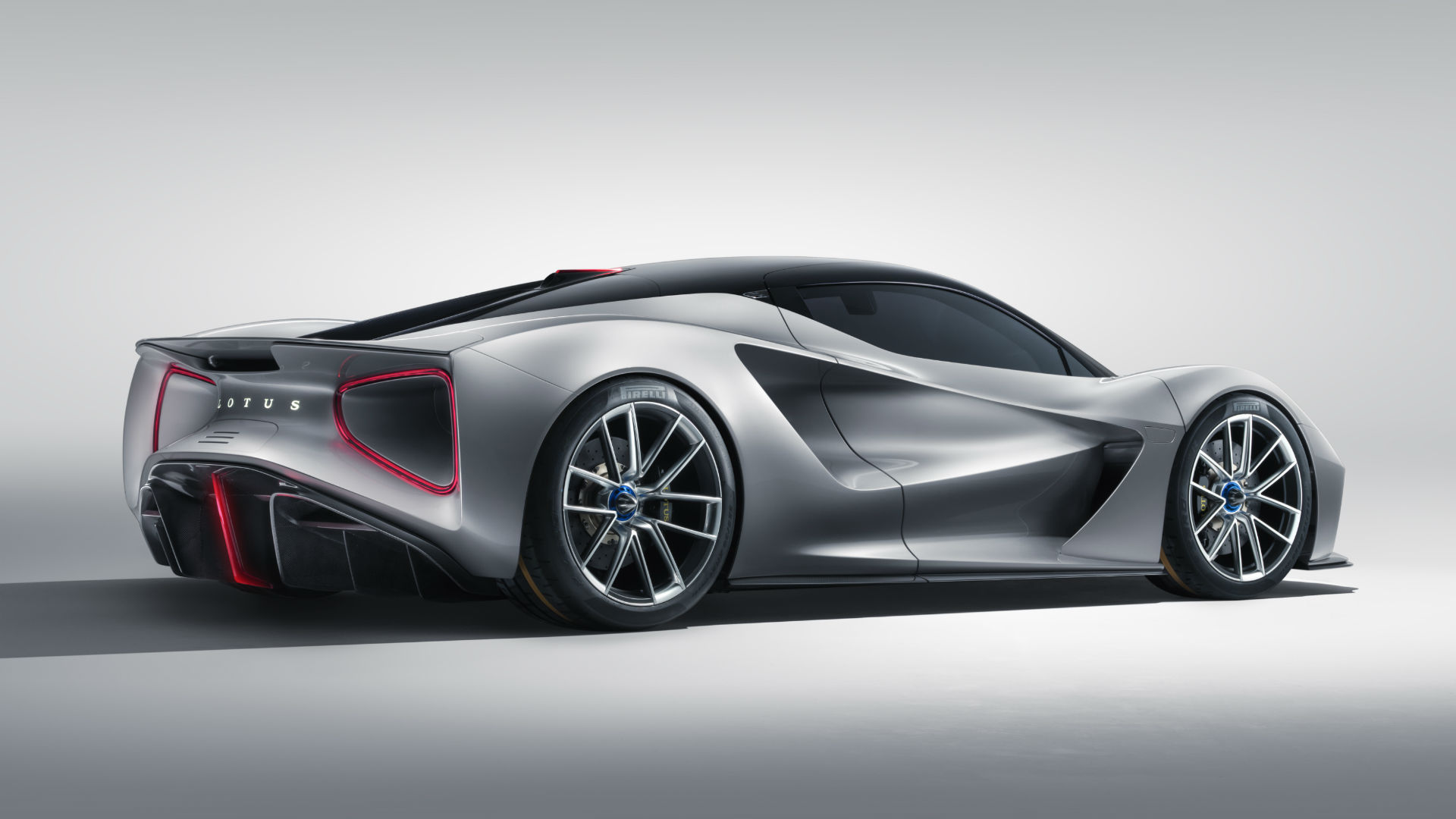 If the stats are startling, the Evija’s design is an equal source of excitement. It’s aggressive without being showy, functional yet still beautiful.

By far the Evija’s most distinctive feature are the venturi ducts that pierce its haunches, funnelling air through the car to help deliver ‘exceptional amounts of downforce’. Surrounded by red LEDs at the rear, they deliberately resemble jet afterburners.

Other aero appendages include the bi-plane front splitter, which provides cool air to the battery, and the pop-out rear-view mirror cameras. These evoke Lotus pop-up headlights of the past, reckons Carr. 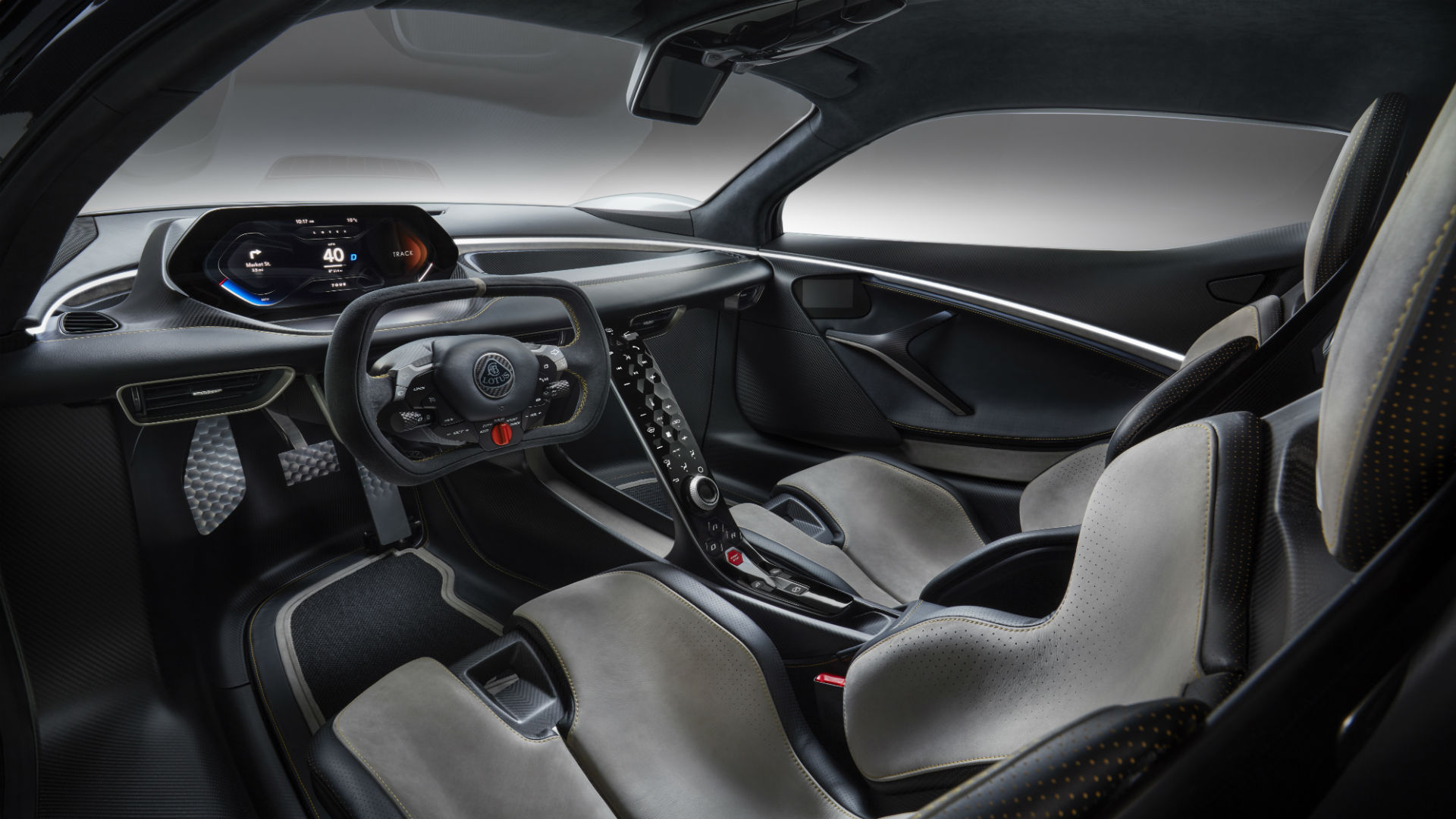 The interior of the Evija is functional and focused on the driver. Access is via dramatic, upwards-opening dihedral doors activated by the key fob (there are no handles). Once inside, a switch in the roof console – a nod to the classic Esprit Turbo – closes them.

Hard-shell carbon fibre seats are upholstered with strategically-placed Alcantara pads, with four-point harness seatbelts an option. The rectangular steering wheel is a clear link with Lotus’ F1 heritage, including a Ferrari-style ‘manettino’ to switch between drive modes.

Up front, a compact digital display helps minimise driver distraction, while the jutting centre console features touch-sensitive haptic switches and a rotary controller for infotainment (including Apple CarPlay and Android Auto connectivity). “The driver is in sync with the car at all times and almost feels as if they are wearing it,” explains Carr. 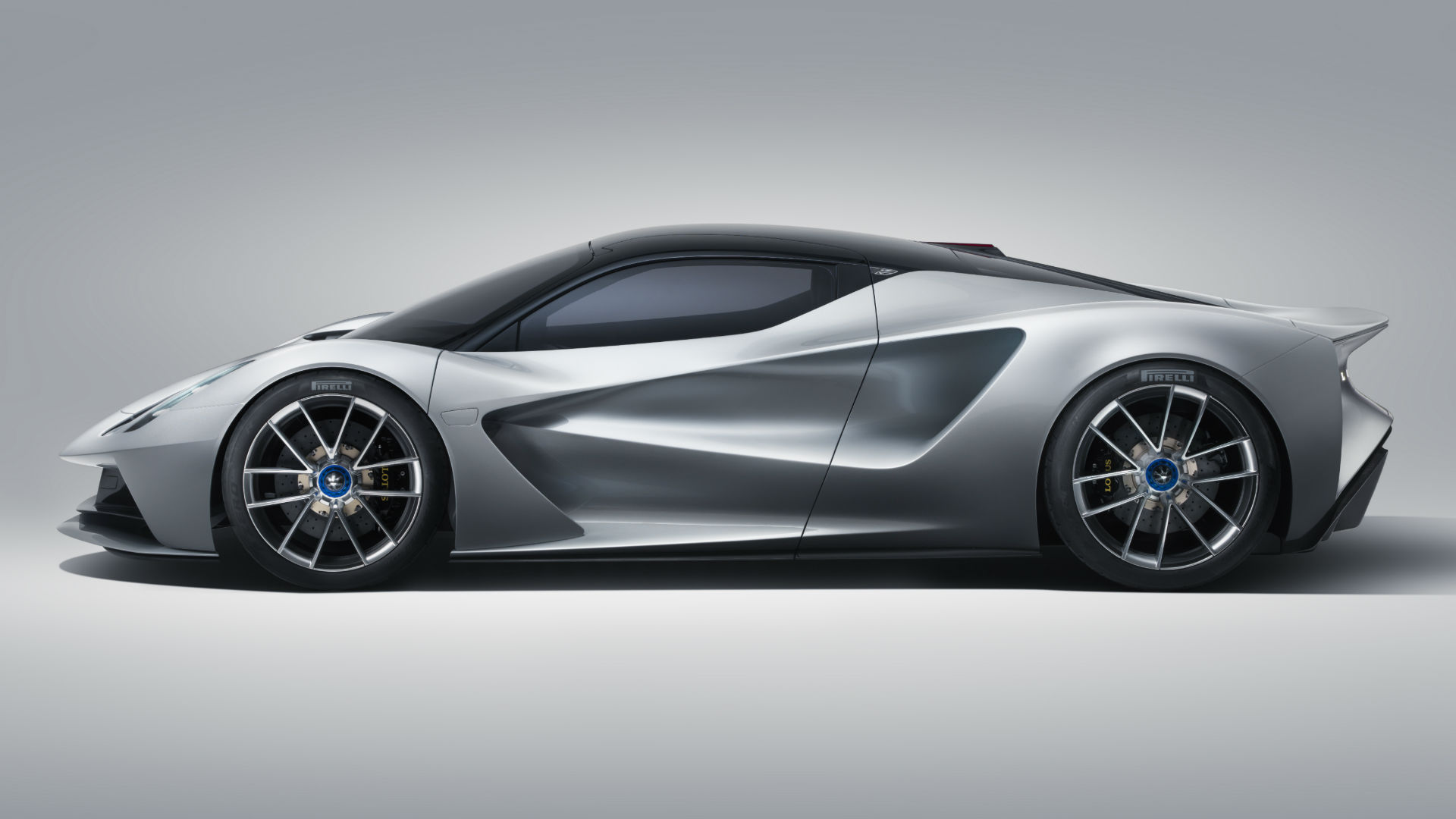 Assuming you drive with a modicum of restraint, the Evija can travel 250 miles (400km) on a full battery. Using a 350kW charger – the most powerful currently available – charge time will be 18 minutes to 100 percent capacity. It will offer Tesla-style over-the-air software updates and a dedicated smartphone app.

Customers will also be able to specify the car to their exact requirements. Want gold badges or a family crest embossed on the seats? If you really must, Lotus can oblige.

MUCH yellow Lotus action outside the Evija preview. pic.twitter.com/b6hoNH0Kgg

Lotus’ parent company Geely has already overseen the rebirth of Volvo and successful launch of Polestar, an upmarket EV brand that offers tempting opportunities for tech-sharing. Who’d bet against it giving Lotus a new lease of life? The Hethel-based company – which built just 1,700 cars last year – seems suddenly on the cusp of greatness.

“The Evija is a car like no other. It will re-establish our brand in the hearts and minds of sports car fans and on the global automotive stage,” said CEO Popham. “We hope this is our Sergeant Pepper moment.” 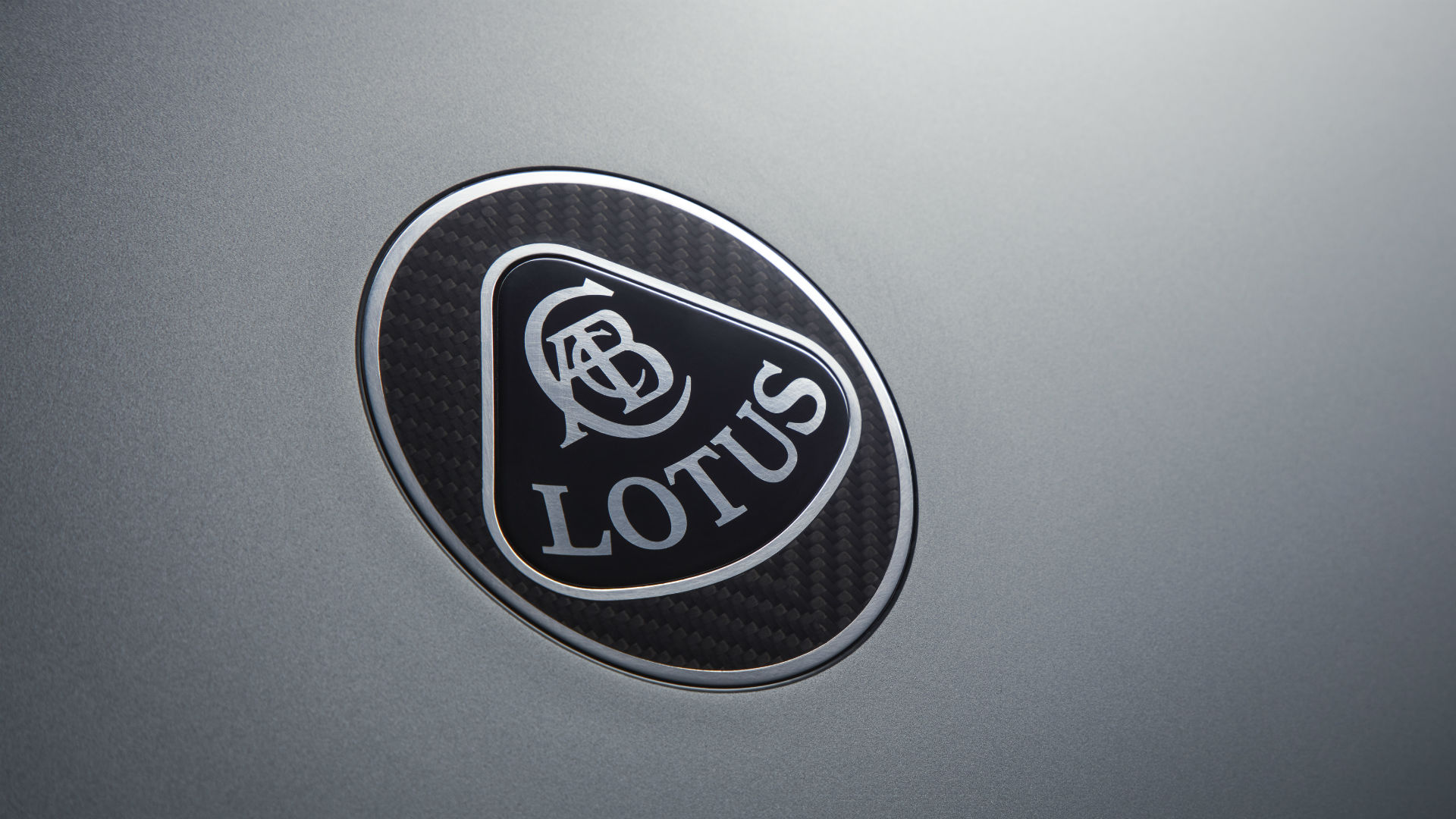