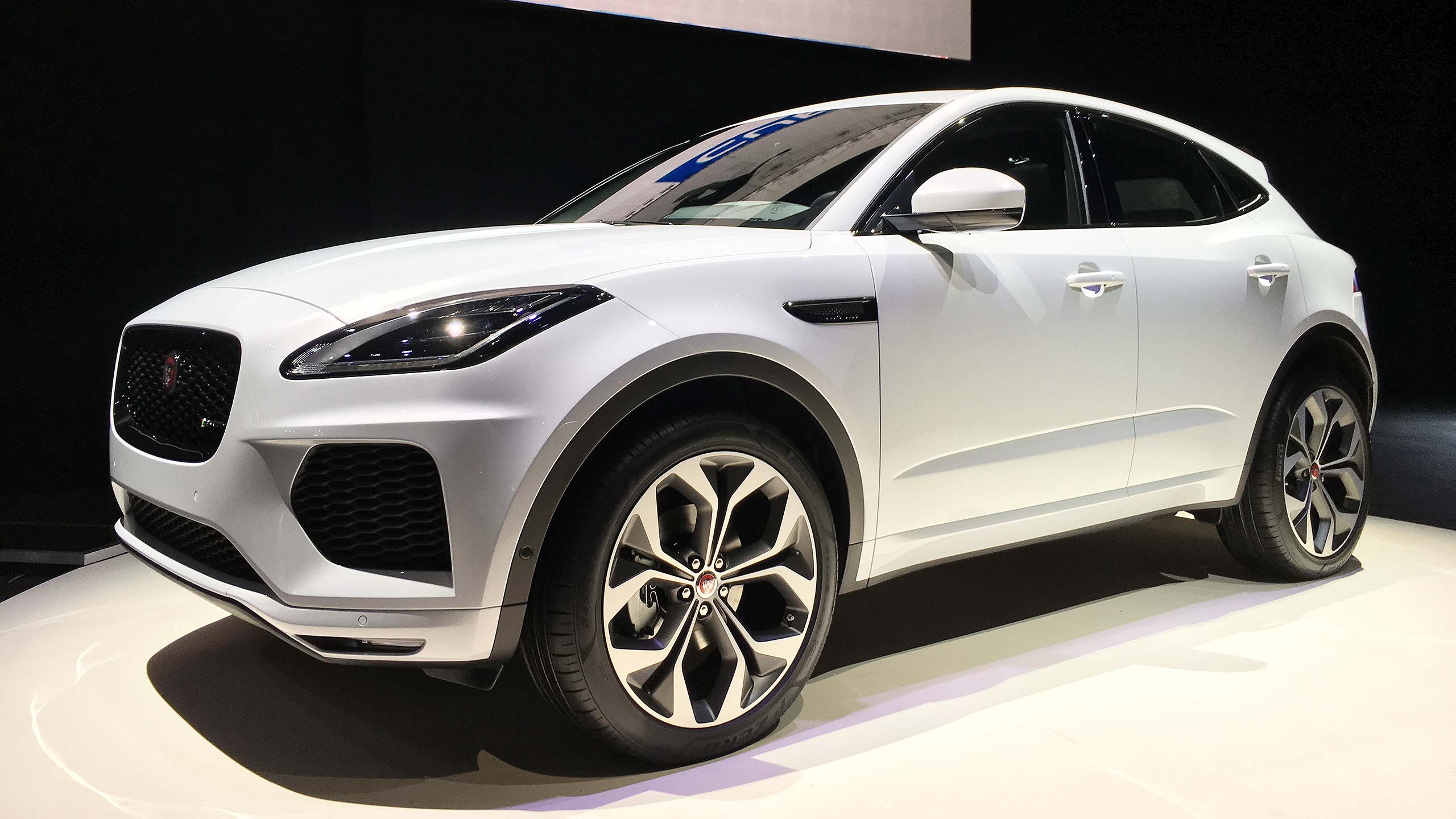 Jaguar is taking on the Audi Q3 and BMW X1 with its new baby SUV, the E-Pace. Jag’s second-ever production SUV, it aims to repeat the success of the F-Pace and give Jaguar sales yet another significant uplift. Priced from £28,500, configurators are live now and ordering opens later in 2017.

Aiming to bring some F-Type sports car style into the small SUV sector, the new E-Pace is derived from a platform also used by the Land Rover Discovery Sport and Range Rover Evoque. Jaguar has fully tuned it to, we’re told, give it handling more akin to a hot hatch, plus contemporary levels of emissions and fuel economy. 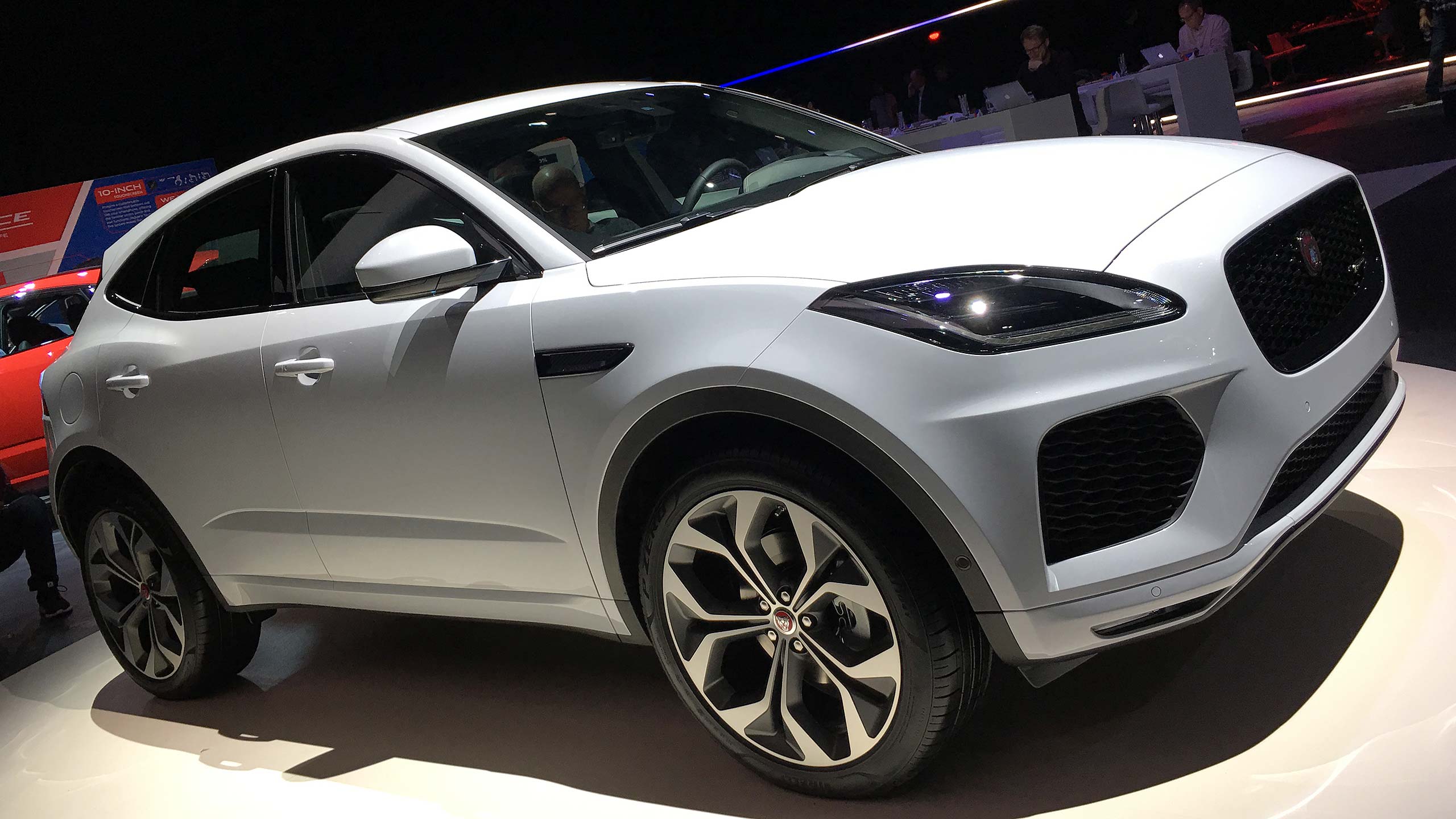 An all-Ingenium, all-four-cylinder engine line-up is based around a 2.0-litre turbodiesel and 2.0-litre turbo petrol. Pick either 150hp, 180hp or 240hp diesels, plus 250hp or 300hp petrols. Most will have a nine-speed automatic transmission with four-wheel drive. There’s also an entry-level front-wheel-drive manual, and range-topping models with active all-wheel drive.

It’s fast, if you want it to be: the 300hp petrol will do 0-62mph in 6.4 seconds and power on to a 151mph top speed – itself electronically limited. But it’s also economical, with Jaguar claiming 60mph and 124g/km CO2 for the 150hp front-wheel drive diesel model.

Active Driveline technology is a first for Jaguar. Using tech also seen on the Ford Focus RS, it’s an all-wheel drive machine that can deliver a rear-biased feel – allowing drivers, says Jaguar, “to initiate power-on oversteer and maintain a controlled drift”. How much fun does that sound! It’s fitted to 300hp petrol and 240hp diesel models: keen drivers, you know the models you need to go after.

The E-Pace is a roomy Jaguar, with full five-seat capabilities. At 4395mm long, it has almost 900mm of rear legroom and a 577-litre boot with the seats up. Each passenger has their own USB socket, while there are four 12-volt sockets and 4G wifi connectivity for up to eight devices. 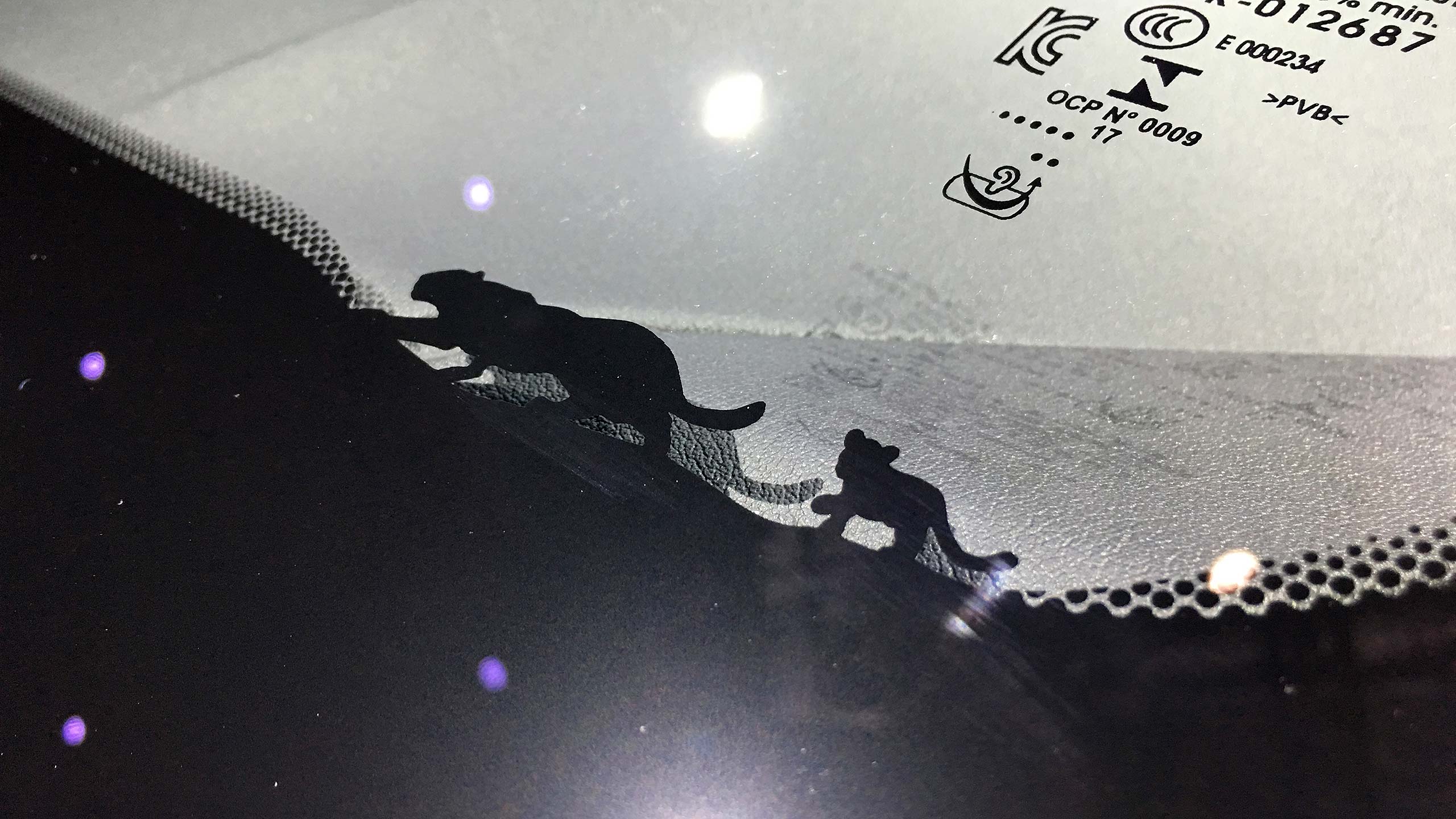 Jaguar’s internal name for the E-Pace was ‘cub’. It helped guide the firm when creating a smaller SUV more focused on cheeky character than graceful elegance. In honour of this, Jaguar cubs feature on the finished model: there’s a cub graphic in the windscreen surround, and also the puddle light that shines on the ground when you unlock the car. “People love it,’ says Jaguar design director Ian Callum.

The styling is the standout. In an exclusive briefing ahead of the E-Pace reveal, Jaguar design director Ian Callum said his objective was “not to create a mini-me of F-Pace: it needed its own character. The F-Type is the heartland of Jaguar design: we picked up cues from that instead, which helped make E-Pace sportier.” 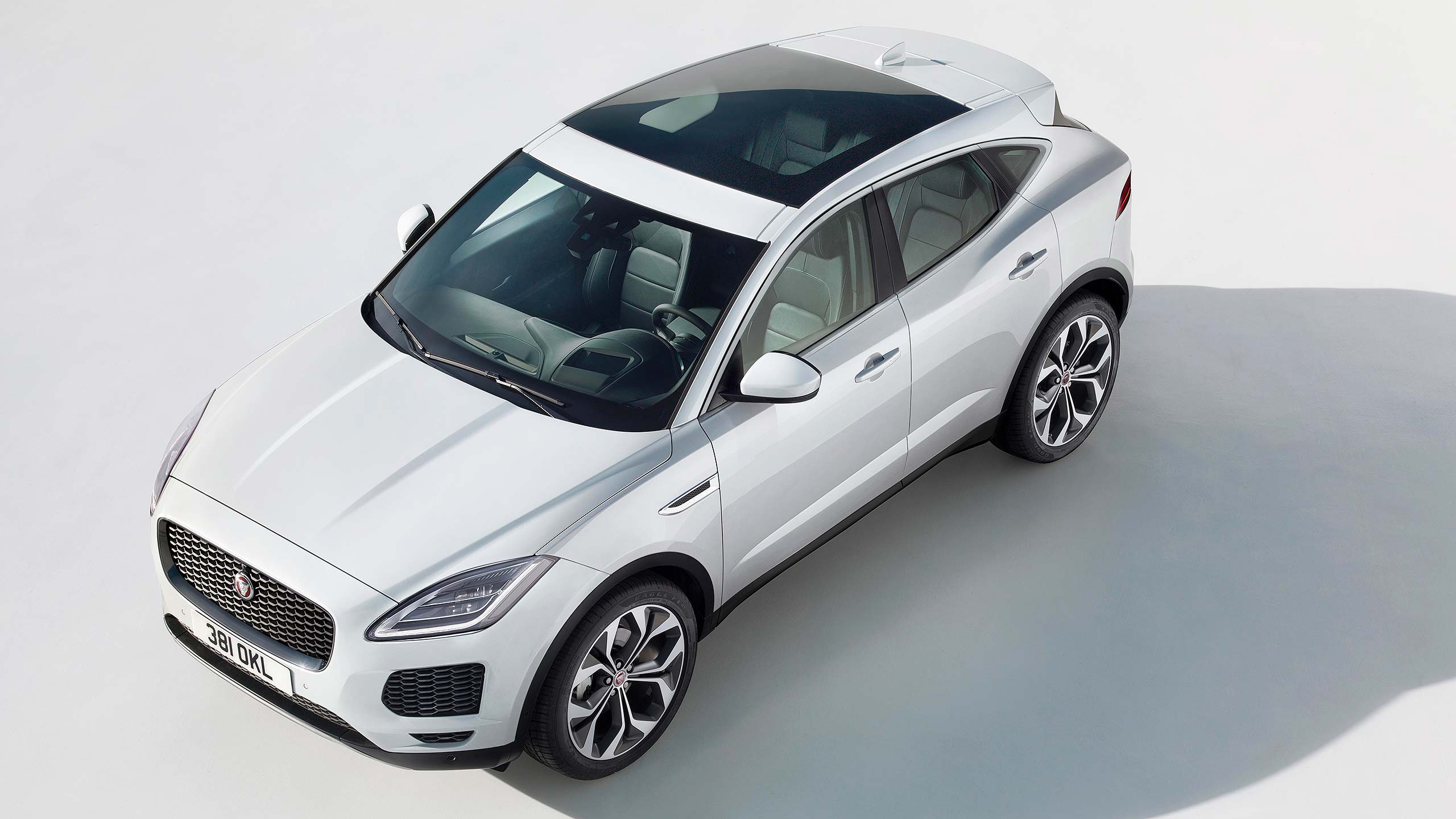 The E-Pace has short overhangs, a bold but carefully-sized Jaguar grille and headlights that mimic the F-Type. It has a long nose and, to balance it, a short rear. The side windowline is a similar shape to an F-Type, as is the kick in the rear, below which sits a muscular, prominent rear haunch. This area is beautifully shaped and gives the E-Pace a strong, bulging look, helped by taut, tight surfaces.

Body sides are simple with two strong feature lines. There’s no cladding on the bottom, but a shape pressed into the panels instead. “It’s confident, simple,” said Callum. “It’s one of the nicest features of the car for me.”

At the rear, the E-Pace is clearly influenced again by the F-Type coupe, to its benefit. “Note the ‘chicane’ light line in the tail light graphics,” says Callum. “This is a new Jaguar character feature, coming to future cars.” Meanwhile, massive 21-inch wheels are available. They look fantastic, although Callum does admit most cars will be sold with 19-inch or 20-inch wheels.

The interior represents another giant leap by Jaguar. It makes the XE look several generations old: the wraparound design is modelled on the F-Type but is much more contemporary, and nicely detailed. It’s more sophisticated than other Jaguars and shows real attention to detail. Jaguar needed to up its game with its interiors, and the E-Pace is proof it has. 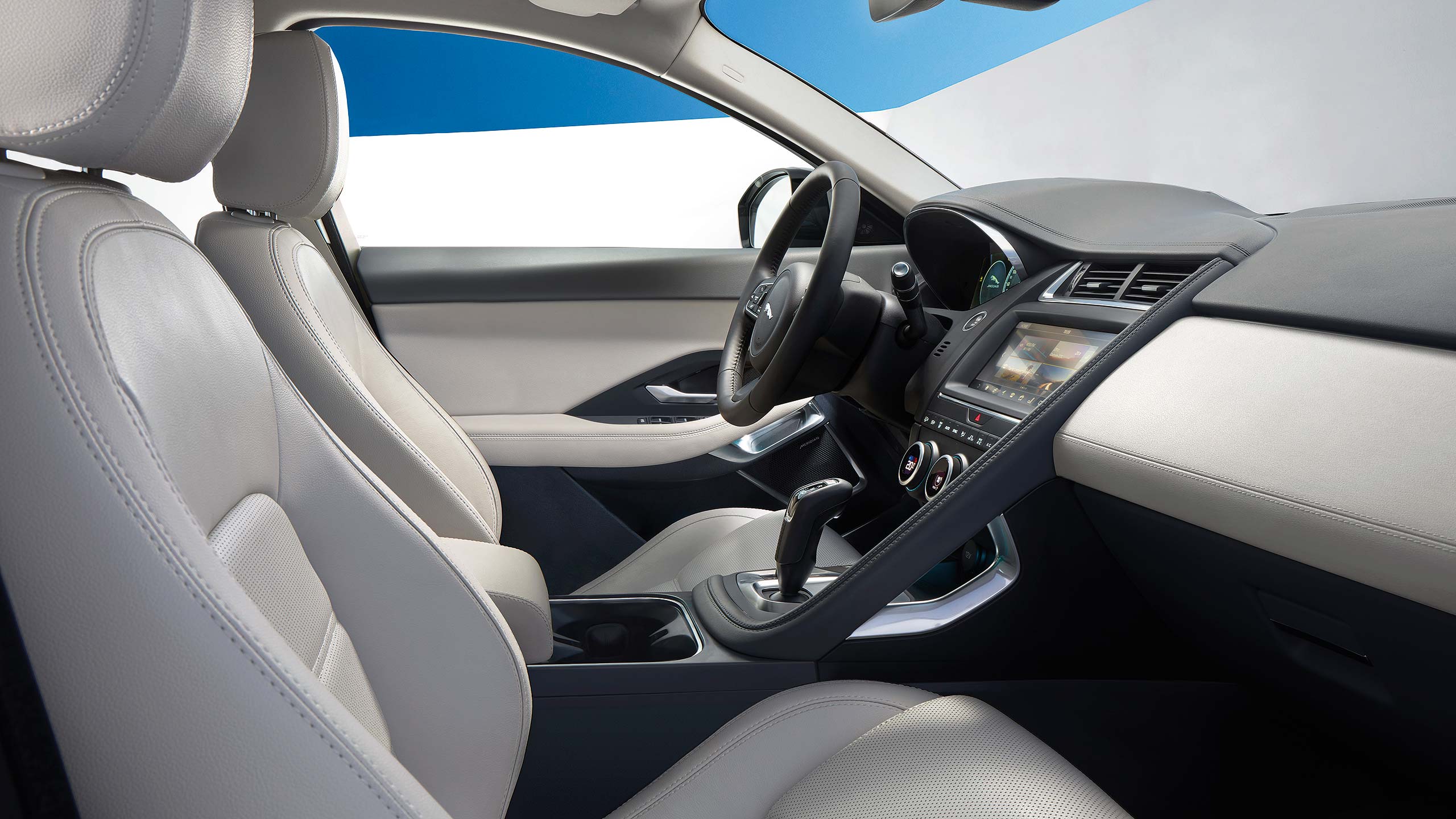 Note the stick-shift automatic gearlever, like in an F-Type. Jaguar is not abandoning its rotary controller, but Callum felt a stick was more fitting here – not least because a six-speed manual version, using an ultra-short throw gearshift, is also available. The nine-speed automatic comes with gearshift paddles on R-Dynamic Pack models.

Jaguar claims the E-Pace is as roomy as larger competitors, both front and rear. Boasting a longer wheelbase than its Land Rover siblings helps here – and we know how roomy they are. There’s more rear legroom than some SUVs from the class above, insists Jaguar. And the boot is so wide, it can swallow a folded buggy, a full set of golf clubs or six flight suitcases: fold the 60:40 split seats and it expands to 1,234 litres.

The E-Pace has at least a 10-inch Touch Pro infotainment screen, with swipe, pinch and zoom functionality. With a quad core processor, the in-house system is the most sophisticated setup ever offered in a Jaguar. Customers can complement it with a 12.3-inch TFT instrument display, which is so configurable, it can even display 3D satellite mapping, like in an Audi.

Jaguar acknowledges it’s been off the pace in terms of interior practicality as well. The E-Pace shows Jaguar is listening. The box between the front seats can hold two 1-litre bottles laid flat, and more. It has a little strap to snugly hold the tablet devices it can swallow. There’s a net beneath the lid to hold small lose items. If this isn’t enough, the glovebox takes 10 litres and the door bins take another 10 litres each.

Safety is a big deal with the E-Pace. ‘The safest Jaguar ever,’ claims the firm. The only car in its class to have a pedestrian airbag. One equipped with a full suite of active safety tech including autonomous emergency braking with pedestrian detection and a Jaguar-patented deployable active bonnet.

The Jaguar E-Pace will be built in two locations – neither of which will be in the UK. European manufacturing is handled under contract by Magna Steyr in Graz, Austria, while Chinese models will be built at the new JLR plant in Changshu. Why isn’t it made in Britain? Simply because the three JLR plants in the UK are already operating at full capacity – and none of them has any capacity to expand further.

The base manual-gearbox front-wheel drive 150hp diesel starts from £28,500, and Jaguar will offer the E-Pace in two key model variants – standard and R-Design: you’ll spot the latter from their more aggressive front and rear designs. There are three trim packs to add on, plus the choice of five engines, and a plethora of options.

For the first year of production, Jaguar is also offering an ultra-rich First Edition variant, priced from £47,800. This has either 180hp diesel or 250hp petrol engines, both with nine-speed automatic. Choose from three colours, Yulong White, Santorini Black or exclusive Caldera Red. If previous Jaguar First Edition models are anything to go by, these are sure to be collectable…