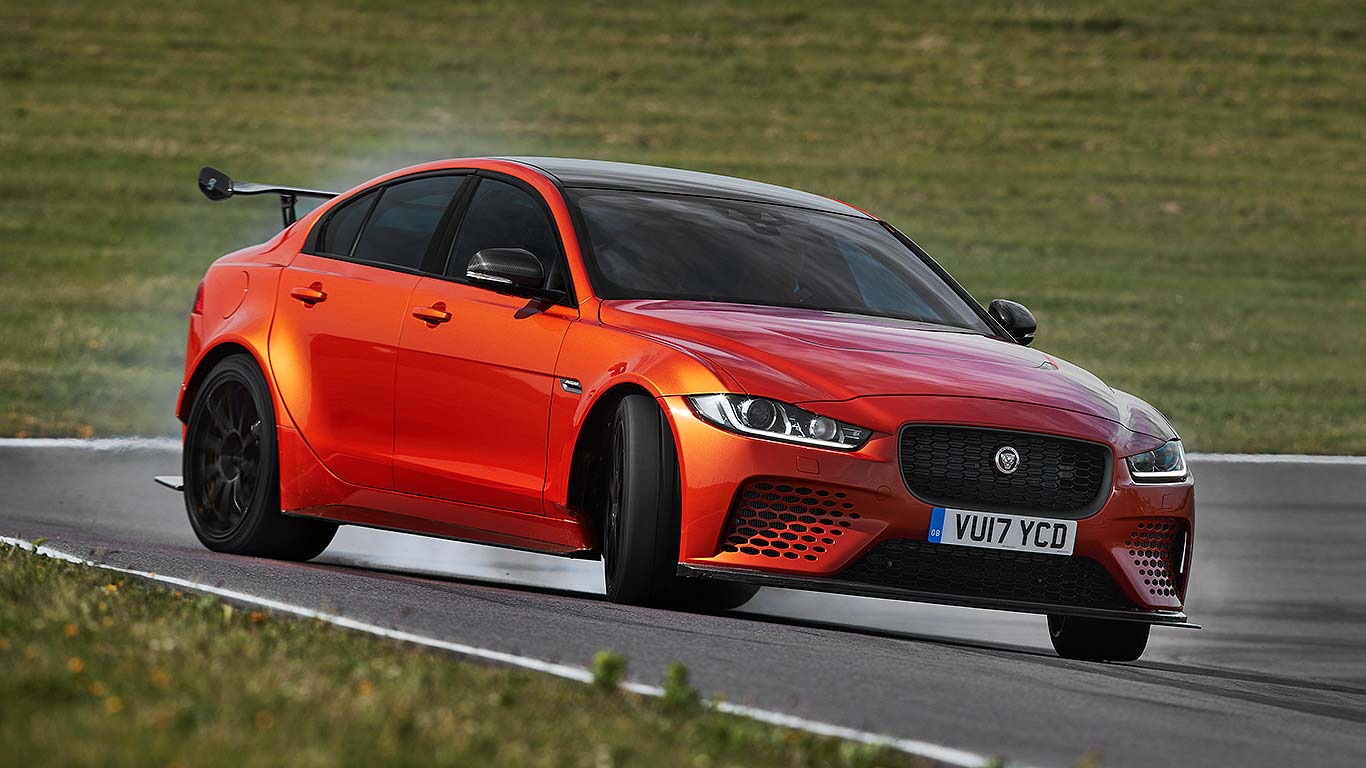 Jaguar has unleashed an amazing 600hp 5.0-litre V8 saloon car, the XE SV Project 8, which it says belongs on the track, delivers supercar performance – and is soon to go on sale in limited numbers, each retailing for £149,995.

The latest Jaguar ‘Project’ car developed by the firm’s crack new Special Vehicle Operations (SVO) division in Coventry, the XE SV Project 8 follows on from the limited-to-250 F-Type Project 7. This time, it’s making 300, each capable of hitting 200mph and rushing from 0-60mph in just 3.3 seconds. The company is not exaggerating when it says it’s a four-door supercar.

Why has Jaguar created it? Why, because it can, says SVO director Mark Stanton. More specifically, because it wants to: it’s created a huge buzz within the division’s still-new team, he said. “This is the car we came here to do.” It’s also a car virtually without rival – not even the mighty BMW M4 GTS can live with it, bosses cheerily point out.

The lengths Jaguar has gone to with the engineering are remarkable. Aside from the stupendous power and pace, the chassis has been given a full track-focused makeover, with adjustable ride height and aerodynamics, all-new Carbon Ceramic Braking system, F1-spec silicon nitride ceramic wheel bearings and an oil-cooled active rear electronic differential. Jaguar fits 20-inch forged alloy wheels with Michelin Pilot Sport Cup 2 tyres.

But as you can probably tell from the images, the aero upgrades are even more extreme, all done to keep the car stable at 200mph yet with lots of downforce for corners. Only the roof and front doors are unchanged; everything else is new, from 55mm wider rear wings, to new and more flared aluminium rear doors, to carbon fibre front wings that are flared 19mm and have cut-away lower edges. The front bumper is carbon fibre as well, as is the front splitter, as is the bonnet.

The body changes are so extensive, even the headlights have moved forward – an almost unprecedented engineering change, mainly because doing so is very expensive. Jaguar could do it because every relevant panel was changing anyway… and moving the headlights was the only way to fit in those 20-inch Michelin Sport Cup 2 tyres it said were essential to deliver the on-track performance. Literally, it’s a no-compromise car.

Hence the rear wing. Not everyone will like it, say the team, but it’s a must-have, because it defines this car. “With such extensive aero changes at the front, the only way to balance it is with this size of rear wing. It’s thus a fundamental part of this car.” The aero pack delivers a massive 205 percent reduction in weight, and it generates 122kg of downforce at 186mph. “25 percent more than Project 8’s nearest competitor,” Jaguar gleefully points out.

It gets better. You can actually get a two-seater version – yes, an XE Project 8 with opening rear doors, but no rear seats… because a half roll cage has been welded in instead. It’s 12.2kg lighter thanks to carbon fibre racing front seats, complete with harnesses, and Track Pack Project 8s also get a gloss black roof and racing stripe decals. Sadly, North American customers, the Track Pack is not available in the US or Canada: blame homologation regulations…

Track-focused attention to detail stretches inside to the instrument binnacle, which has an Alcantara covering so it doesn’t reflect in the windscreen. There are aluminium gearshift paddles and instead of Jag’s normal rotary gearshifter, the pistol-grip level from the F-Type has been fitted instead. 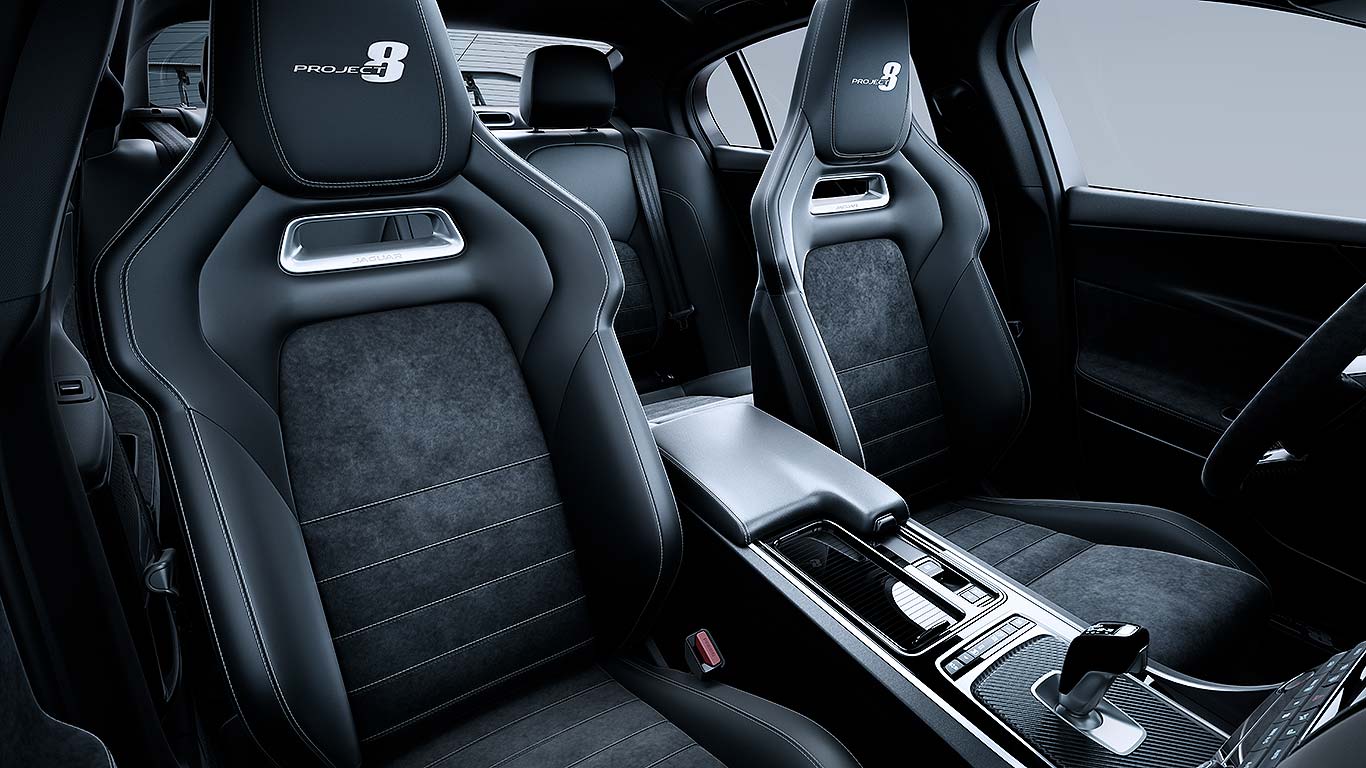 For the first time, all Project 8 XEs will be built from the ground up at the bespoke JLR Oxford Road site in Coventry – by hand, on a brand new production line. “Project 8 is a great example of what happens when enthusiastic designers, engineers and manufacturing specialists are given the opportunity to create an extreme performance sports car without compromise,” said SVO MD John Edwards.

The Jaguar XE SV Project 8 will make it world dynamic debut at the Goodwood Festival of Speed on 30 June; production will begin later this year for what Jaguar design director says “is one of the most extreme vehicles we have ever created, but [which is] still very much a Jaguar”.