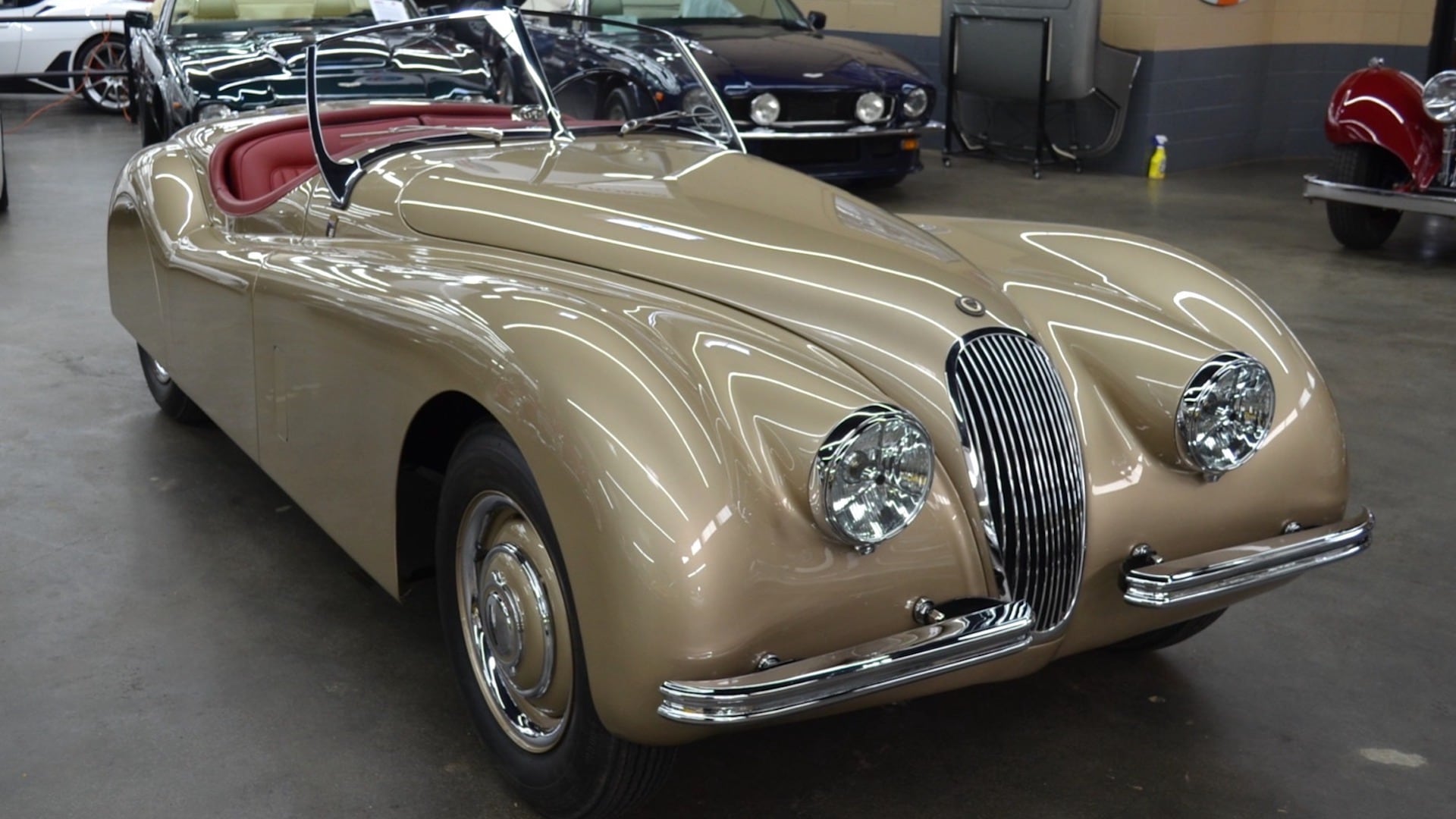 Discovered abandoned in 2010, the classic Jag has been subject to a thorough restoration process to return the car to its former glory.

Being owned by one of Hollywood’s greatest stars, and featuring custom touches by George Barris, should make this a roadster in demand.

“I’m no actor and I never have been” 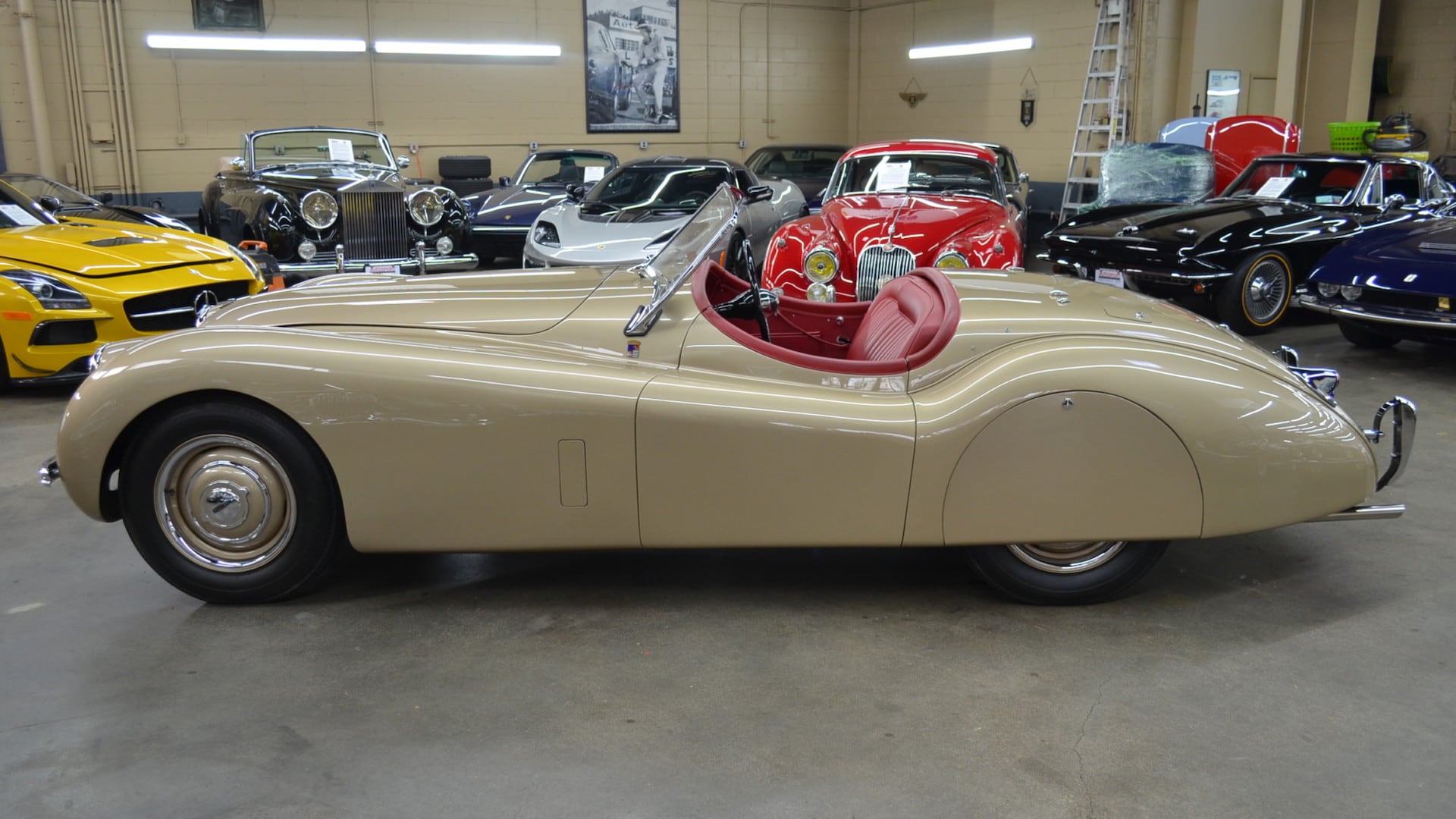 The 1952 XK120 available on Bring a Trailer is said to be one of three owned by Clark Gable during his silver screen career.

Best known for appearing in the 1939 classic Gone with the Wind, Gable was rated as the seventh-greatest legendary movie star by the American Film Institute. He also topped lists of biggest money-making actors multiple times.

Such success allowed him to indulge in pleasures such as buying Jaguar sports cars, even into the twilight years of his career after military service during World War II. 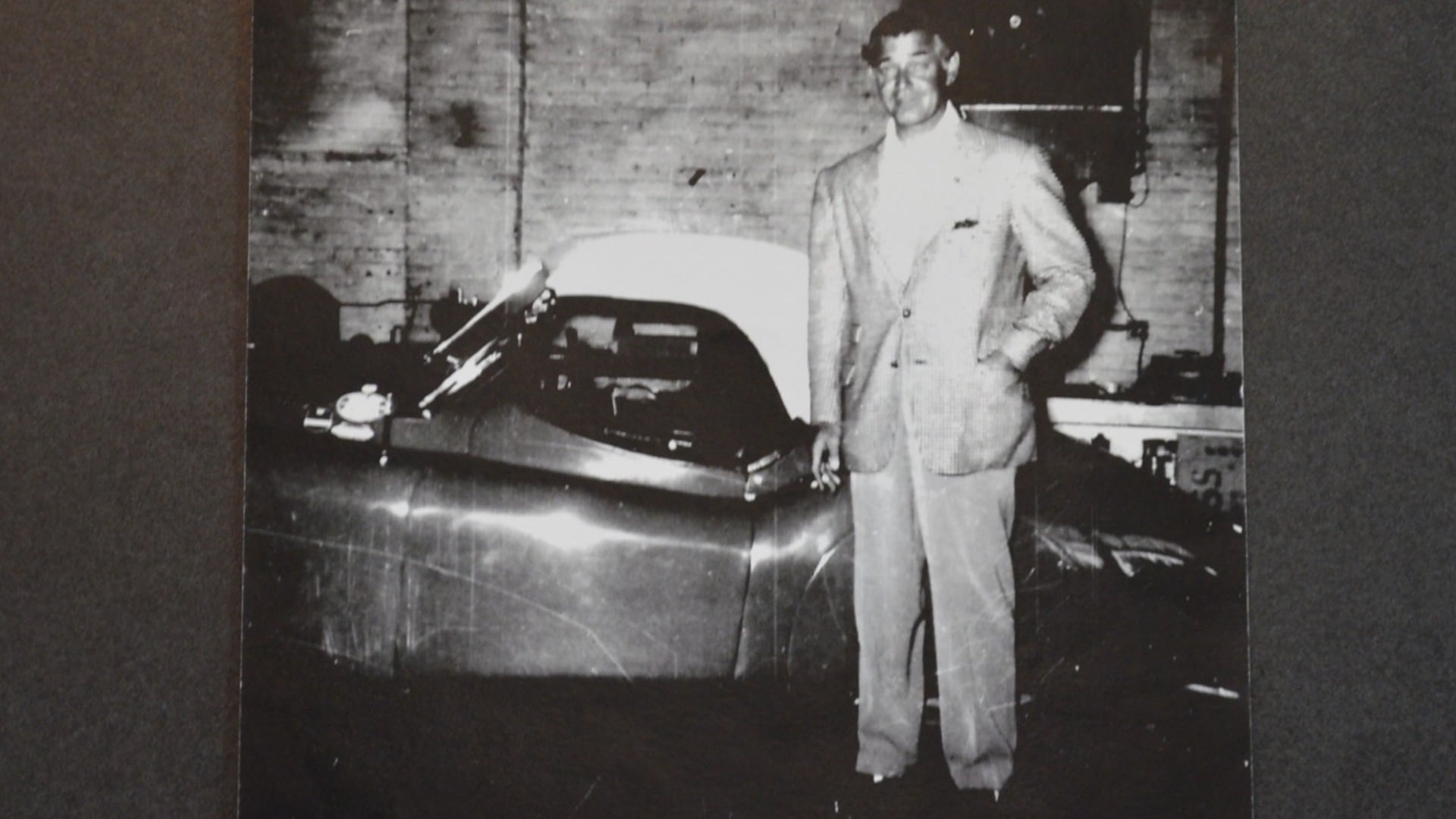 Built in July 1952, the XK120 Roadster available for sale was delivered to Los Angeles and sold through the Hornburg dealership. Originally painted in Battleship Grey by the factory, the car was sent almost immediately to the workshops of George and Sam Barris.

Gable’s initial Jaguar XK120 was the first one sold in the United States, having been bought new in Hollywood. His second was said to have been a gift from Tony Hulman, the owner of the Indianapolis Motor Speedway.

This meant he wanted his third XK120 to stand out, meaning the gray paintwork had to go. As such, Gable asked Barris Kustoms to repaint the Jaguar in a bold bronze color scheme.

Too Hot to Handle 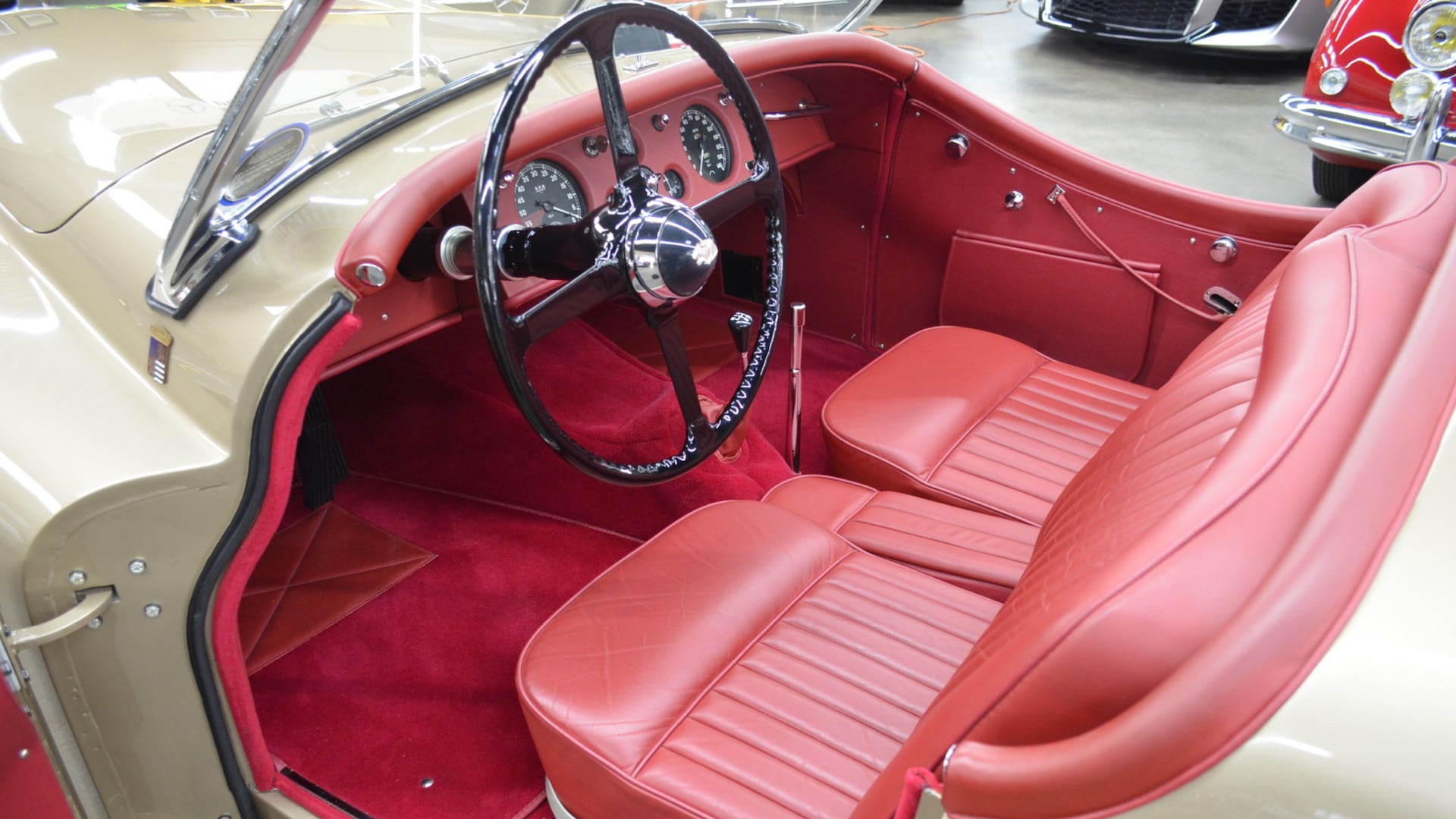 Along with the paintwork, Barris Kustoms also shaved the headlight spears, smoothed the front fenders, and removed decorative items from the trunk. A custom-made hardtop was also installed, plus Barris Kustoms badges.

The interior of the XK120 was left unchanged by Barris Kustoms, retaining the bold red leather upholstery and matching wool carpets.

Also untouched was the standard 3.4-liter six-cylinder engine and its twin SU carburettors. This offered 160 horsepower, and made the XK120 the world’s fastest production car when it debuted in 1948.

Gone with the Wind 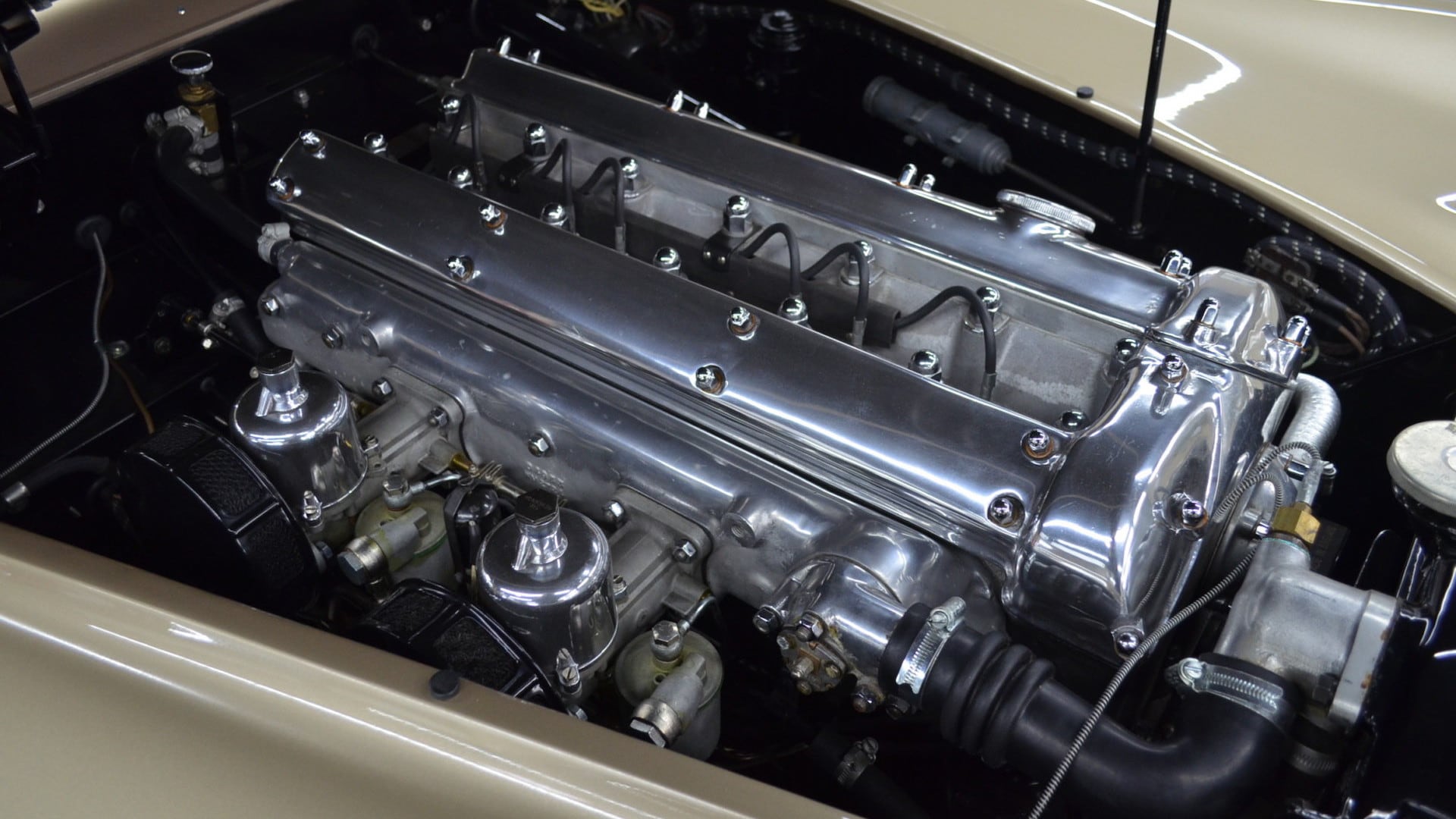 Following Gable’s death in 1960, details of where the XK120 went are unclear. However, it was discovered by a Chicago-based car collector in 2010, having been left in storage.

The extensive restoration was then commissioned, including having the car painted in the subtler Opalescent Sand color seen on it now.

All work was documented and photographed, including original items like the factory tool kit and custom luggage marked with Gable’s initials.

Following the restoration the car has appeared at the 2017 Pebble Beach Concours d’Elegance, the 2019 Greenwich Concours, and this year’s Amelia Island Concours event. 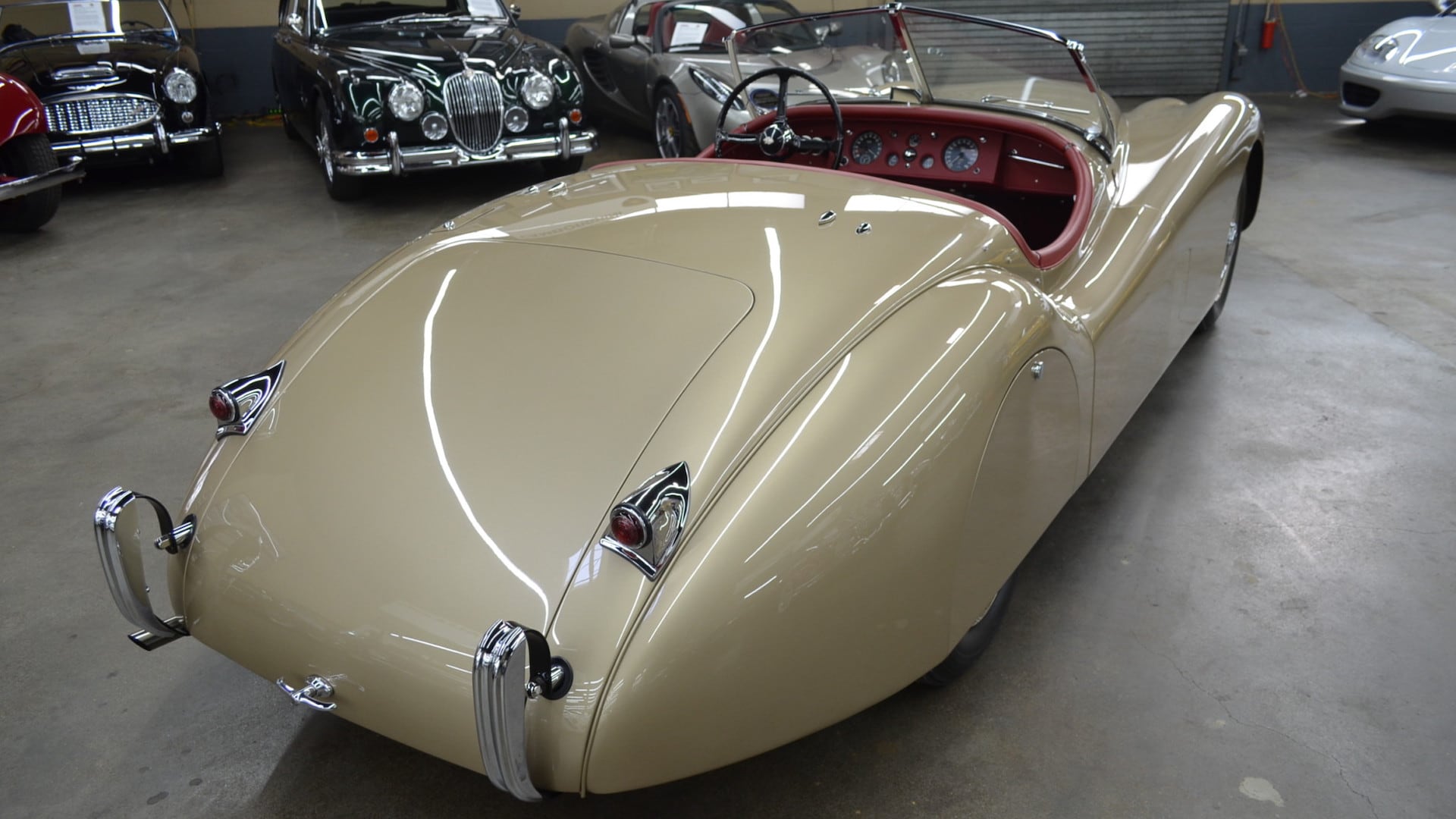 A Jaguar XK120 in fully restored condition, and with only 18,000 miles on the odometer, would be a desirable classic in almost any situation.

Having been owned by a cinema legend, and featuring modifications by a famed custom shop, makes this a unique proposition.

Certificates of authenticity from Barris Kustoms and the Jaguar Daimler Heritage Trust are included in the sale, plus a photo of Gable with the car itself.

The car is being sold as part of Bring a Trailer’s Premium service, meaning the auction runs for longer than normal. Due to conclude on Friday, April 10th, Gable’s Jaguar has already received several big bids.