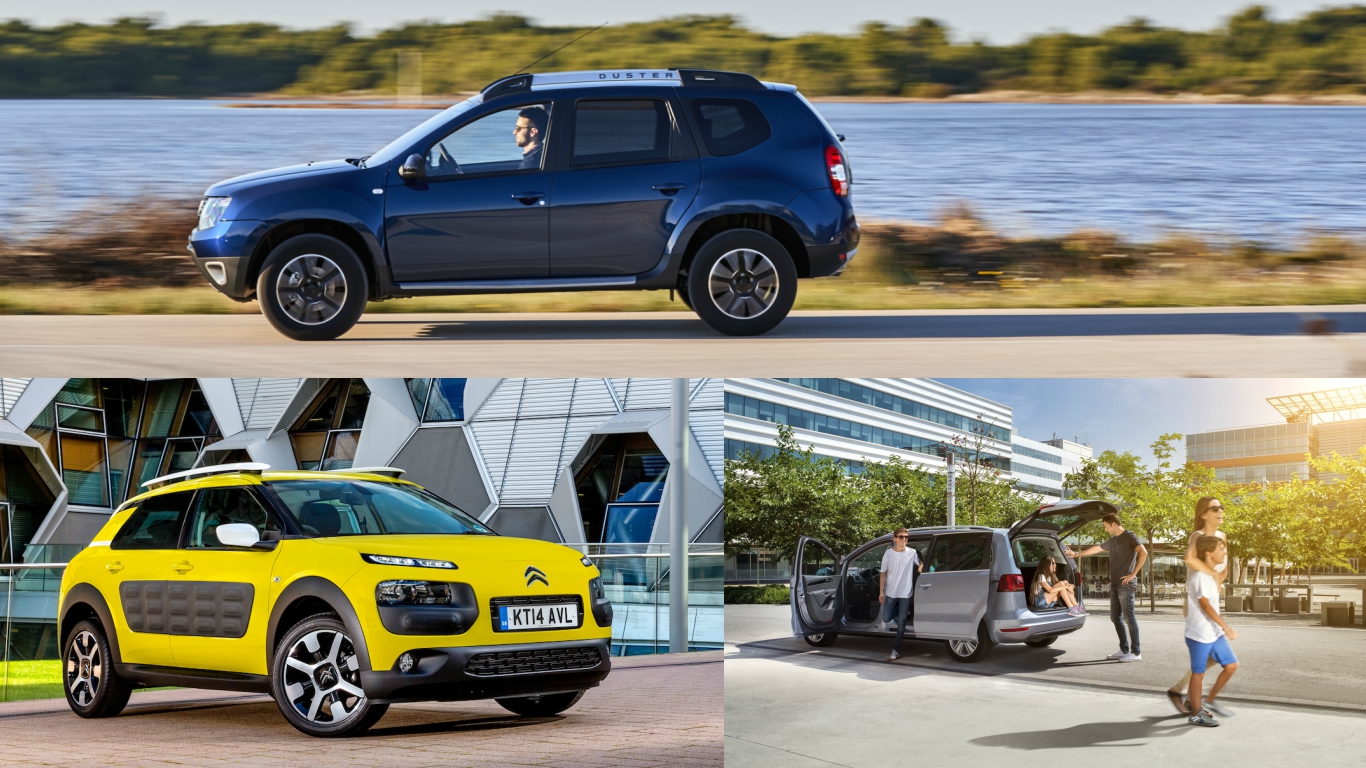 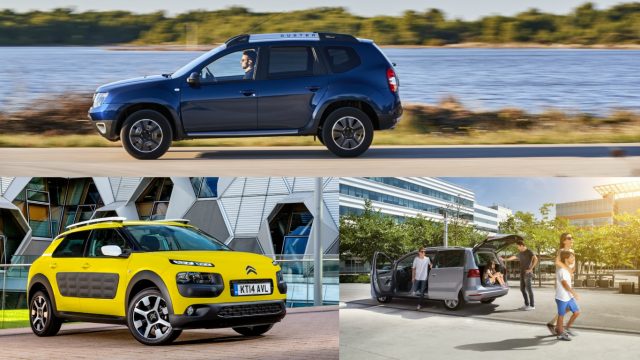 Transporting a family is hard work at the best of times, but trying to do it on a budget is even tougher. Fortuntely, trying to be fiscally responsible doesn’t mean you have to compromise on a new car – as these 12 choices demonstrate. 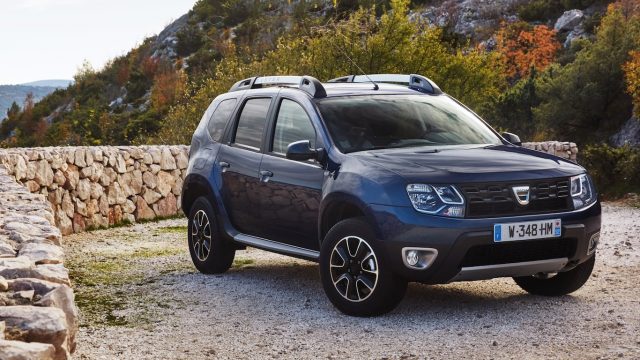 As one of the cheapest cars on sale in the UK, the Dacia Duster is perfect for embracing automotive austerity. There’s genuine off-road ability and its looks are pleasingly utilitarian, rather than needlessly overstyled. The interior is equally spartan, but it means you can let kids and dogs go wild, and fill the 451 litres of boot space without concern.

The Access model is priced from £9,495, and really is budget motoring: a radio is not even standard. You’ll have to adjust your wing mirrors manually, but at least the windows are operated electrically. Move further up the range and you’ll get sat nav and air conditioning included, but the Duster makes the most sense bought as cheaply as possible. 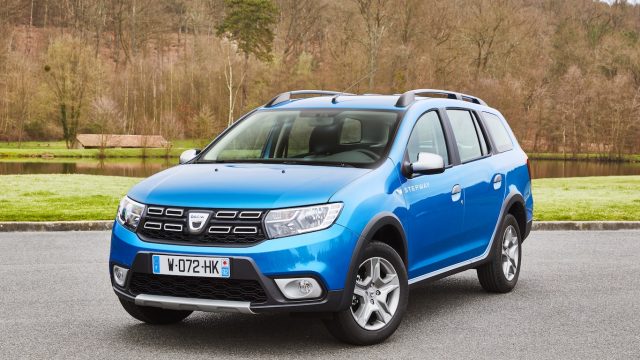 The regular Dacia Logan MCV is a cheap and cheerful compact estate, but moving up to the Stepway version adds extra glamour with off-road-ready bodywork. Think of this as a very cut-price alternative to the Audi A4 Allroad or Volvo V60 Cross Country. Although with 1,518 litres of boot space with the seats down, the MCV Stepway is actually more practical than those premium machines.

With a starting price of £11,495, the Logan MCV Stepway might seem pricey for a Dacia, but you do gain a more substantial level of specification. Parking sensors, air conditioning and even satellite navigation come as part of the deal in Laureate trim, while there is a choice of petrol or diesel engines. 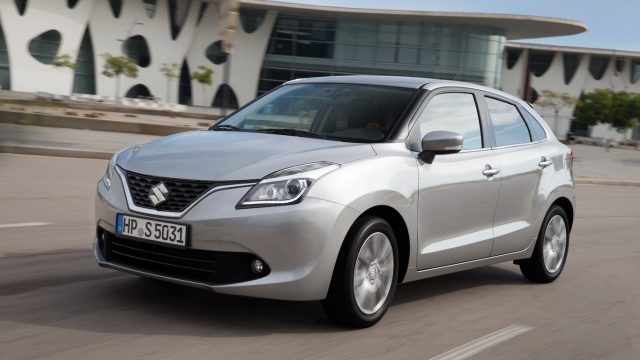 Created as a larger alternative for buyers who have outgrown the Swift supermini, the Baleno offers up a decent combination of price and practicality. It’s big on interior space, with plenty of room for those up-front and for rear passengers. The boot can also hold 320 litres of luggage: on par with the bigger Ford Focus.

Suzuki offers a comprehensive standard specification across the Baleno range, with even the £11,999 entry-level SZ3 packed full of features: DAB radio, air conditioning, automatic headlights and even a leather-covered steering wheel are all there. SZ3 trim means you only get the 1.2-litre petrol engine, though. You’ll need to spend an extra £2,000 to get your hands on the superb 1.0-litre turbocharged Boosterjet engine. 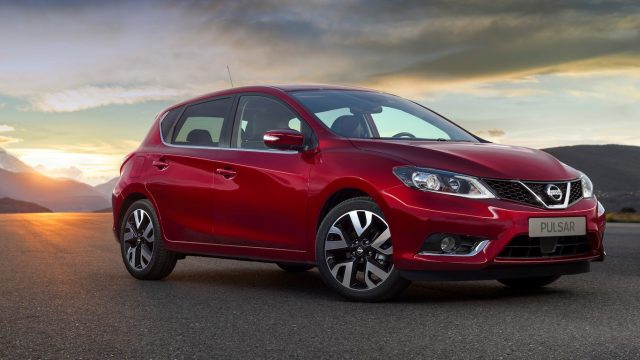 While the Juke and Qashqai crossovers take all the Nissan limelight, the hatchback Pulsar is left in the shadows. This is a conventional family hatch in the truest sense of the word, bringing nothing revolutionary to the segment. That doesn’t have to be a bad thing, though – especially if you happen to have children with rather long legs.

Yes, the Pulsar has the largest amount of rear legroom in the entire C-segment hatchback class: enough to shame much bigger cars. It’s also competitive in terms of boot space, beating the omnipresent Volkswagen Golf with 385 litres. The cheapest 1.2-litre turbo Visia model includes air conditioning, cruise control, and Bluetooth connectivity, all for the bargain price of £13,275. 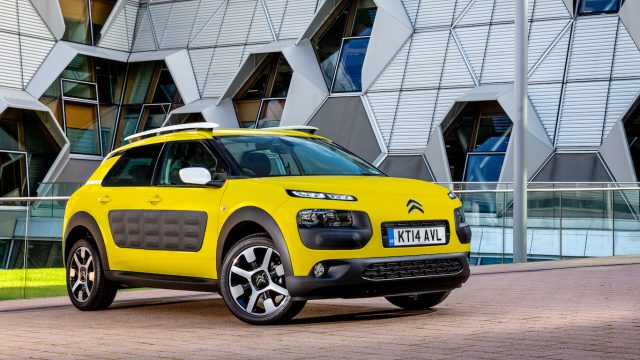 Proof that family motoring on a shoestring doesn’t have to be dull, the styling of the C4 Cactus is divisive, but undoubtedly quirky. Yet it is also practical, with the trademark Airbumps helping protect the bodywork from errant car doors and shopping trolleys. Drivers benefit from the commanding view created by the raised ride height, although rear passengers have to contend with windows that only pop open.

Stylish utilitarianism is the name of the game with the C4 Cactus, with a standard touchscreen display controlling almost all functions and cutting the dashboard button count down to virtually zero. Entry-level Touch models are rather sparse on kit, but do at least gain electric front windows, DAB radio, and cruise control as standard. Air conditioning isn’t even optional on Touch trim – worth bearing in mind given those pop-out rear windows. 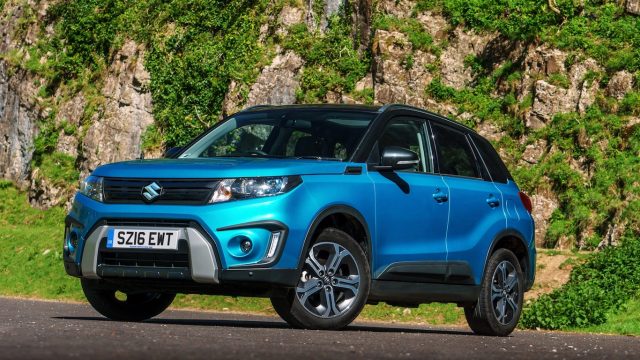 Forget the Vitara from the late 1980s and early 1990s. There are no ultra-wide bodykits or rhino-branded spare wheel covers here. Today the Vitara is a family-friendly compact SUV, with a practical interior and a driving experience far more fun than you would ever believe. It might not have the biggest boot, at just 375 litres, but overall space is good for young families.

For a pound less than £15,000, you’ll be getting the Vitara in SZ4 specification. It means you miss out on the touchscreen multimedia system offered higher up the range, but do still get a DAB radio, cruise control, automatic air conditioning, and 16in alloy wheels. SZ4 trim limits engine options to just one: a 1.6-litre petrol with 120hp driving just the front wheels. Best keep your off-roading aspirations to a minimum, then. 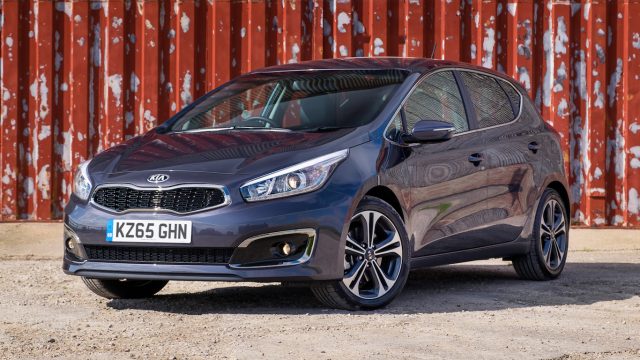 The existing Kia Cee’d has been around since 2012, with an all-new version planned for next year. That doesn’t mean you should discount the current Cee’d though, as it still offers a pleasing blend of value and usability, plus good looks. It’s also impossible to rule out the value of the standard seven-year/100,000-mile warranty if you plan on keeping your Cee’d for the long haul.

Kia doesn’t do optional extras, meaning the trim level you pick is all-or-nothing. Entry-level ‘1’ specification comes with air conditioning, dual projector headlights, Bluetooth connectivity and a DAB radio as standard. There’s not even alloy wheels at this basic specification level, while the standard engine is a naturally-aspirated 1.4-litre petrol with 98hp and the potential for a combined 47.1 mpg. Take solace in the handsome styling, and make use of the luggage space that rivals a far costlier Volkswagen Golf. 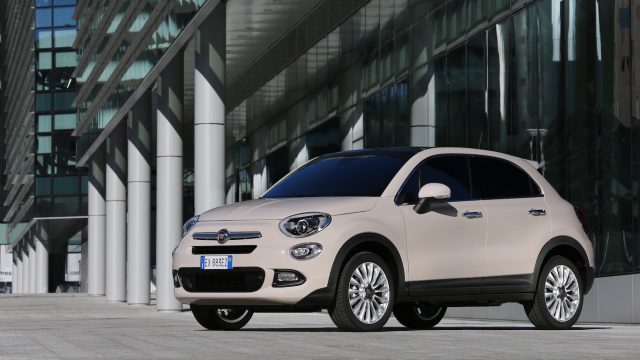 Forget ideas of the tiny Fiat 500 city car. The 500X is a compact crossover based on the Jeep Renegade, but undercutting its American rival by almost £3,000. It’s bigger than it looks in photos, meaning cabin space is capable of making adults feel well accommodated, both front and rear. Boot space of 350 litres is nothing to write home about, but retro styling and the potential for 4WD will always create limitations. The interior does at least feel well made, with added Italian design flair.

Shopping at this price point means buying a 500X in ‘City Look’, which means no off-road bravado. The entry-level ‘Pop’ model brings a choice of 1.6-litre petrol or 1.3-litre diesel engines, with the latter adding £1,585 to the price. Standard specification includes air conditioning, cruise control, electric windows, and a body-coloured dashboard. Plus, can you really put a price on retro charm? 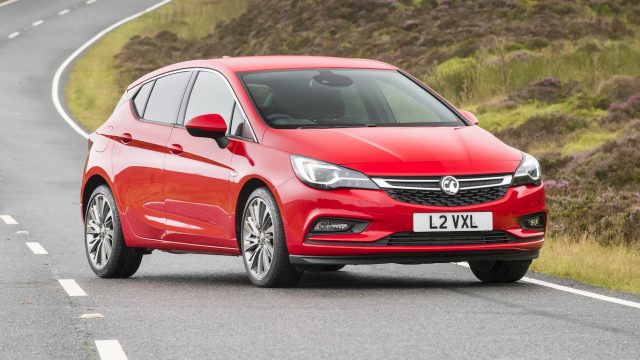 It’s built in Britain and was the 2016 European Car of the Year, fending off challengers like the Volvo XC90 and Mazda MX-5. Despite all that, the Astra tends not to rate too highly in terms of desirability, which does it something of a disservice. It’s a thoroughly competent family hatchback, provided you can see beyond the inevitable desire for a Volkswagen Golf.

With prices beginning at £16,535, the Astra costs some £1,230 less than the German machine, and is more than £3,000 cheaper than the lowliest Ford Focus. Proof that substantial savings abound if you can park your badge snobbery. The entry-level Design model comes with cruise control, air conditioning, and even Apple CarPlay/Android Auto as standard. 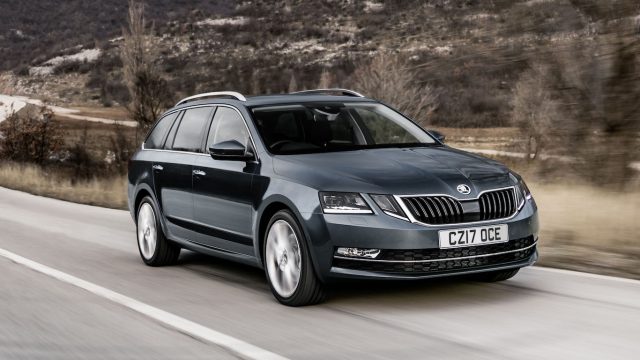 If maximum load space is top of your priorities, say hello to the Octavia Estate. Visually it isn’t the most exciting car, and the use of the Octavia for everything from minicabs to ambulances and unmarked police cars certainly gives a it a blue-collar reputation. However, there’s a reason it gets picked for practical roles, and that’s its gigantic 610 litres of boot space with the rear seats up – swelling to a vast 1,780 litres with them folded flat.

With prices from £18,395, there is something of a compromise to pay for all that internal real estate. Basic ‘S’ trim means a 1.0-litre petrol engine with 115hp, but that’s still enough for the Octavia to achieve 0-62mph in 10.1 seconds and return an official 59mpg. You’ll also get air conditioning, an 8in touchscreen multimedia system, Apple CarPlay/Android Auto connectivity, DAB radio and 16in alloy wheels as standard. 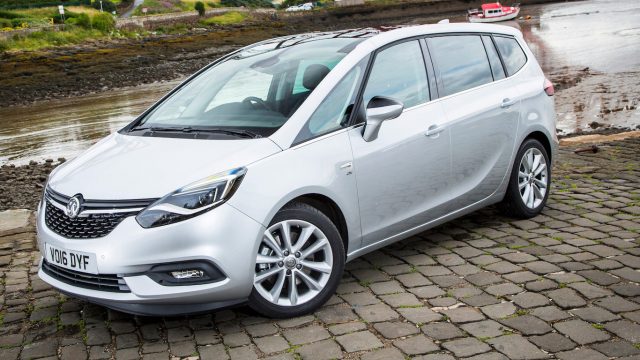 Previous generations of the Zafira have hardly had the greatest image, but at least the Tourer brings genuine good looks to the MPV party. It’s a full seven-seater, with over 1,800 litres of luggage space with the seats down – and is better to drive than you might imagine. If you can ignore any personal hang-ups about the Vauxhall badge, this may be the answer to your family needs.

As with the Astra, entry-level with the Zafira Tourer means Design trim. However, just like with the smaller hatchback, this is still very generous in terms of standard specification. Air conditioning, front and rear parking sensors, 17in alloy wheels, cruise control and a DAB radio are all part of the kit. A 140hp 1.4-litre turbocharged petrol engine is the cheapest offering, capable of 0-62mph in 9.9 seconds with a combined 44mpg. 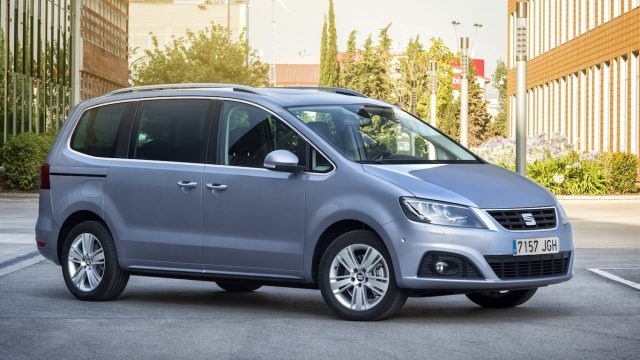 Once upon a time, large MPVs roamed the retail parks and service station car parks of the nation in droves. Today, a big upmarket seven-seater MPV is something you turn to when you need a very particular set of skills. Fortunately, just like Liam Neeson in Taken, the Alhambra is rather good at taking care of your kids, with a five-star Euro NCAP safety rating.

It might be the most expensive car here, with prices starting from £25,435, but that comfortably undercuts key competitors like the Ford Galaxy and Volkswagen Sharan. Even with all seven seats in use, there’s still 267 litres of luggage space, while with the rear seats folded flat it becomes a gargantuan 2,297-litre-capacity van. All versions get alloy wheels, climate control and Bluetooth connectivity as standard.