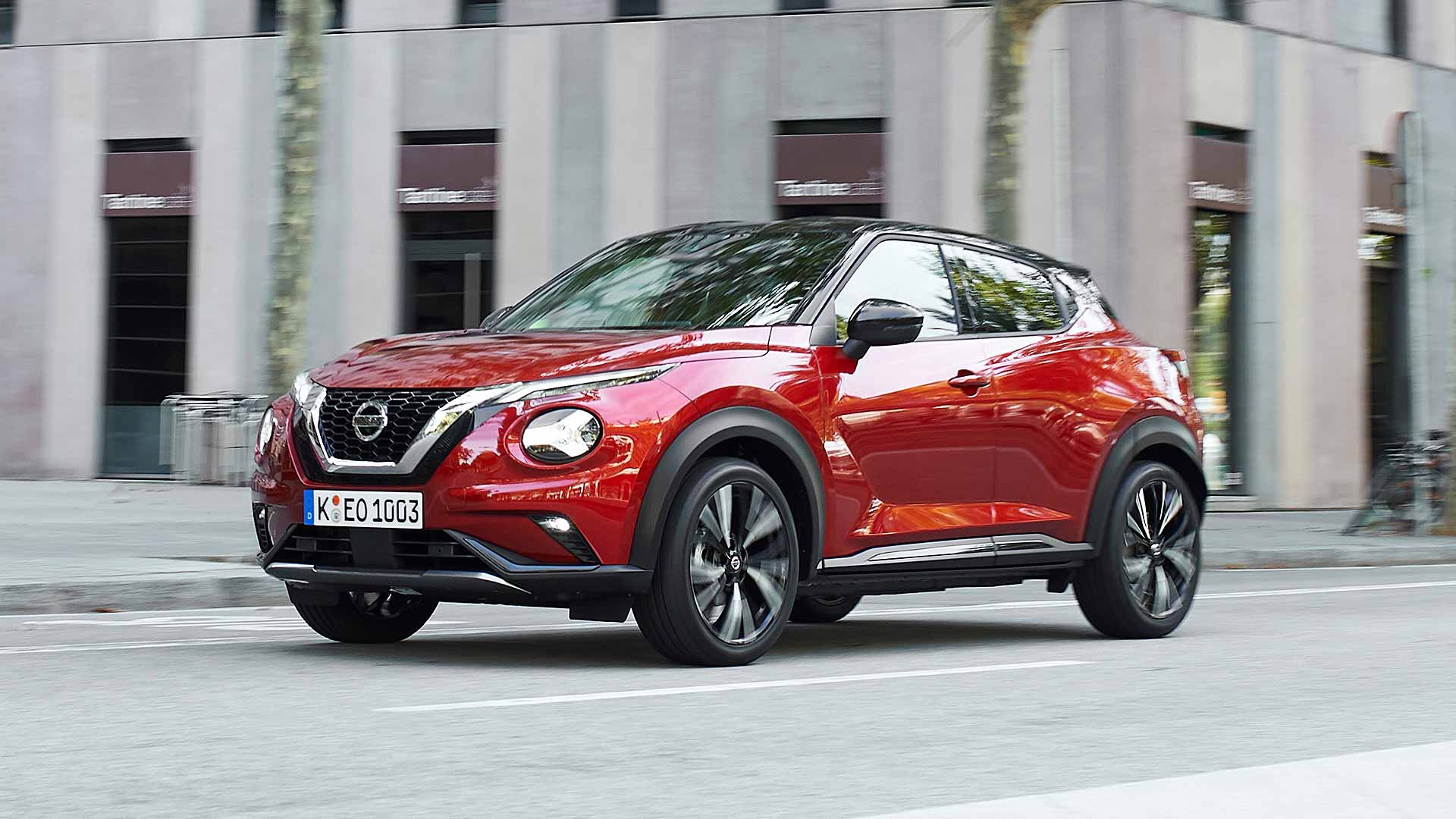 The new Nissan Juke is a car with which the firm must have taken a deep breath before replacing. The 2010-vintage, we regularly were told on the Barcelona first drive, was the B-segment (industry-speak for supermini) crossover pioneer. Volkswagen T-Cross, Seat Arona, Peugeot 2008, Ford Puma, Skoda Kamiq – all (and so many more) owe their existence to the Juke. It ‘did a Qashqai’, a car sector below. 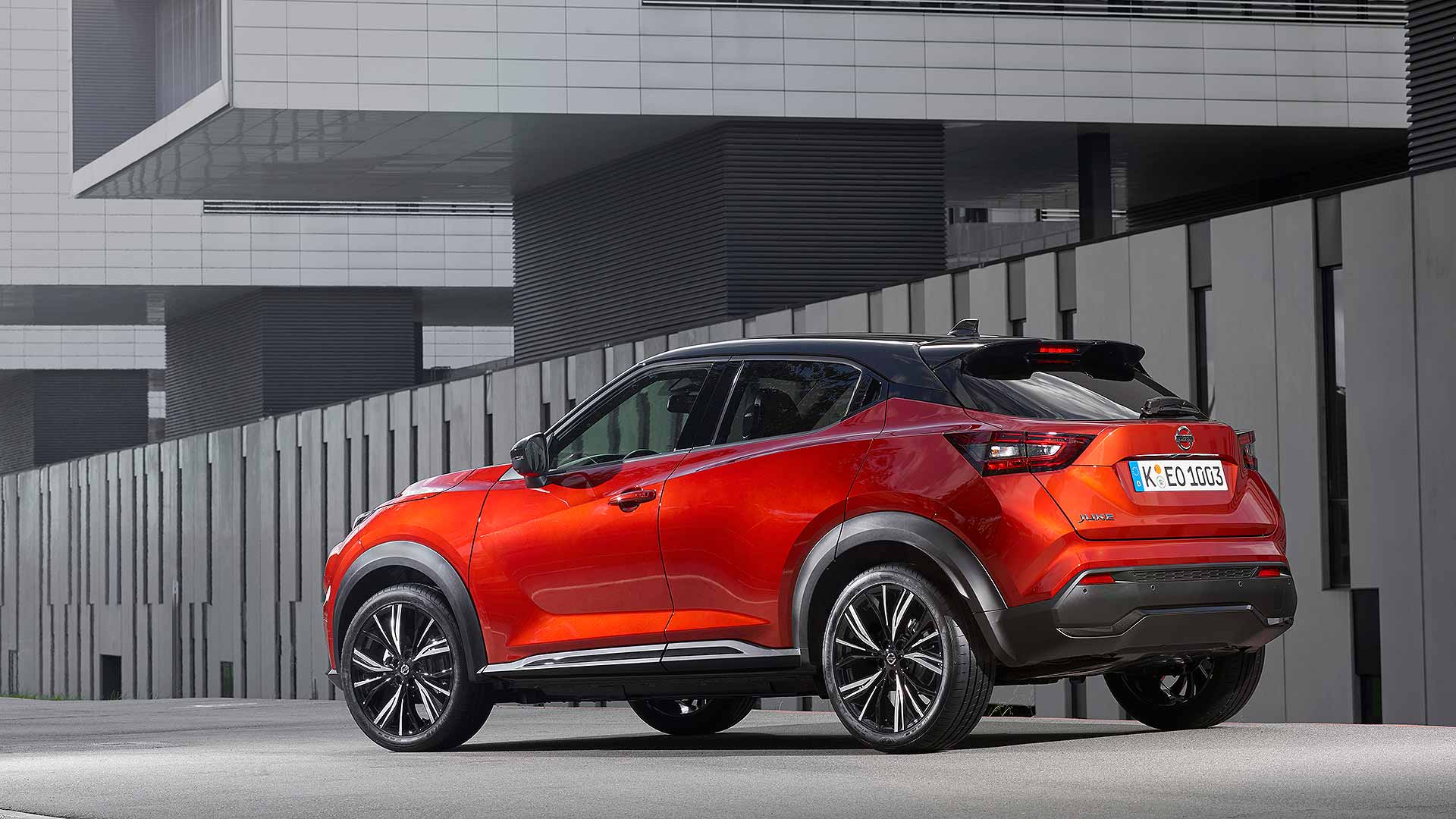 Nissan admits the Juke is a Marmite car, and likes the fact some hate it. This one has even sharper creases and angles than the original, and a bolder front end that’s less cutesy than the first. Bizarrely, it’s somehow more Juke than the first one. 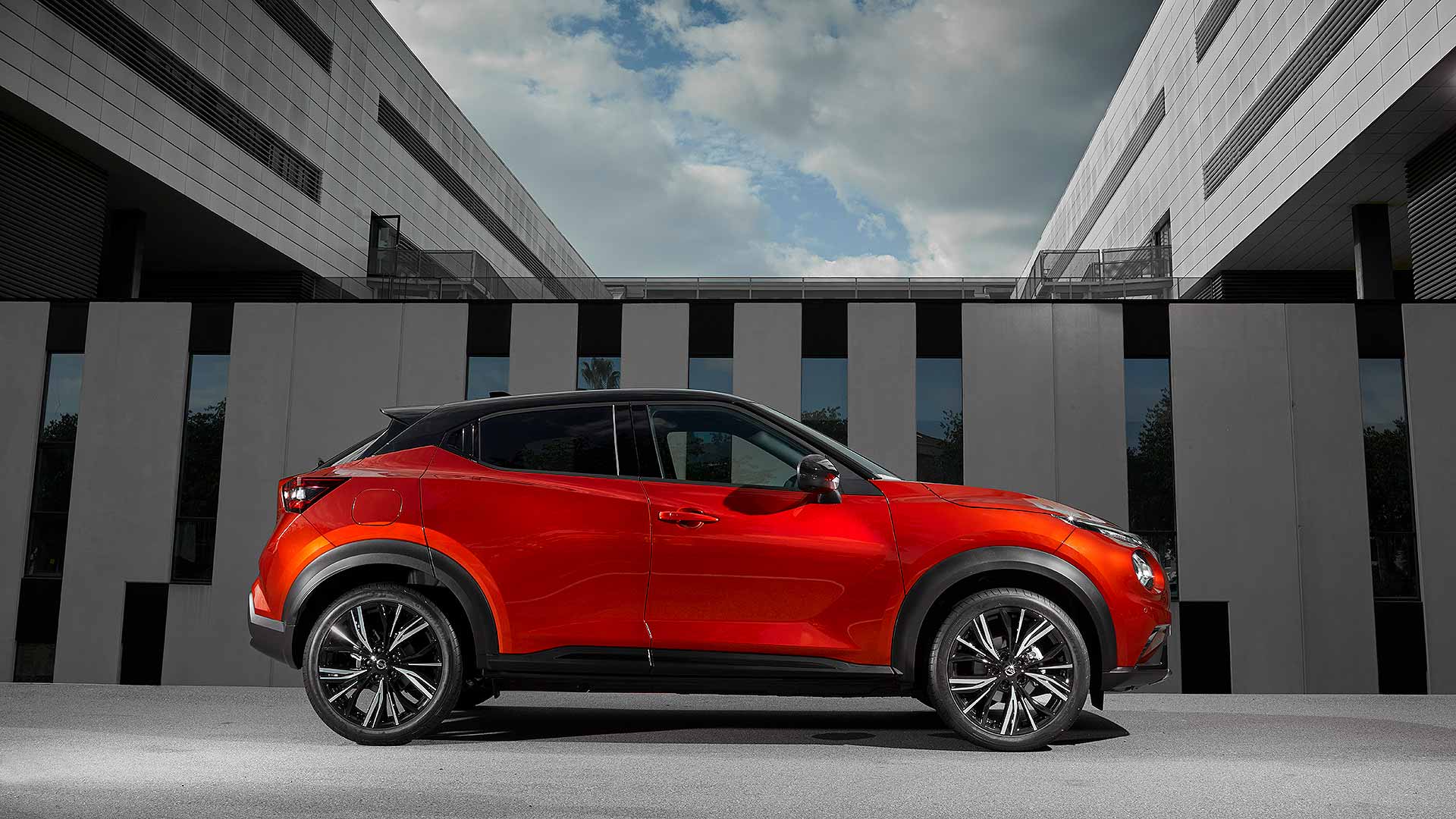 It’s bigger on the outside, 75mm longer, with the space between the wheels extended even more. Result: far more space in the rear (watch your head as you step out, though) and the boot, sorely compromised on the original, is a commodious 422 litres (10 percent bigger than a VW Golf). Half the rear lights now rise up with the bootlid, so the opening is wider. 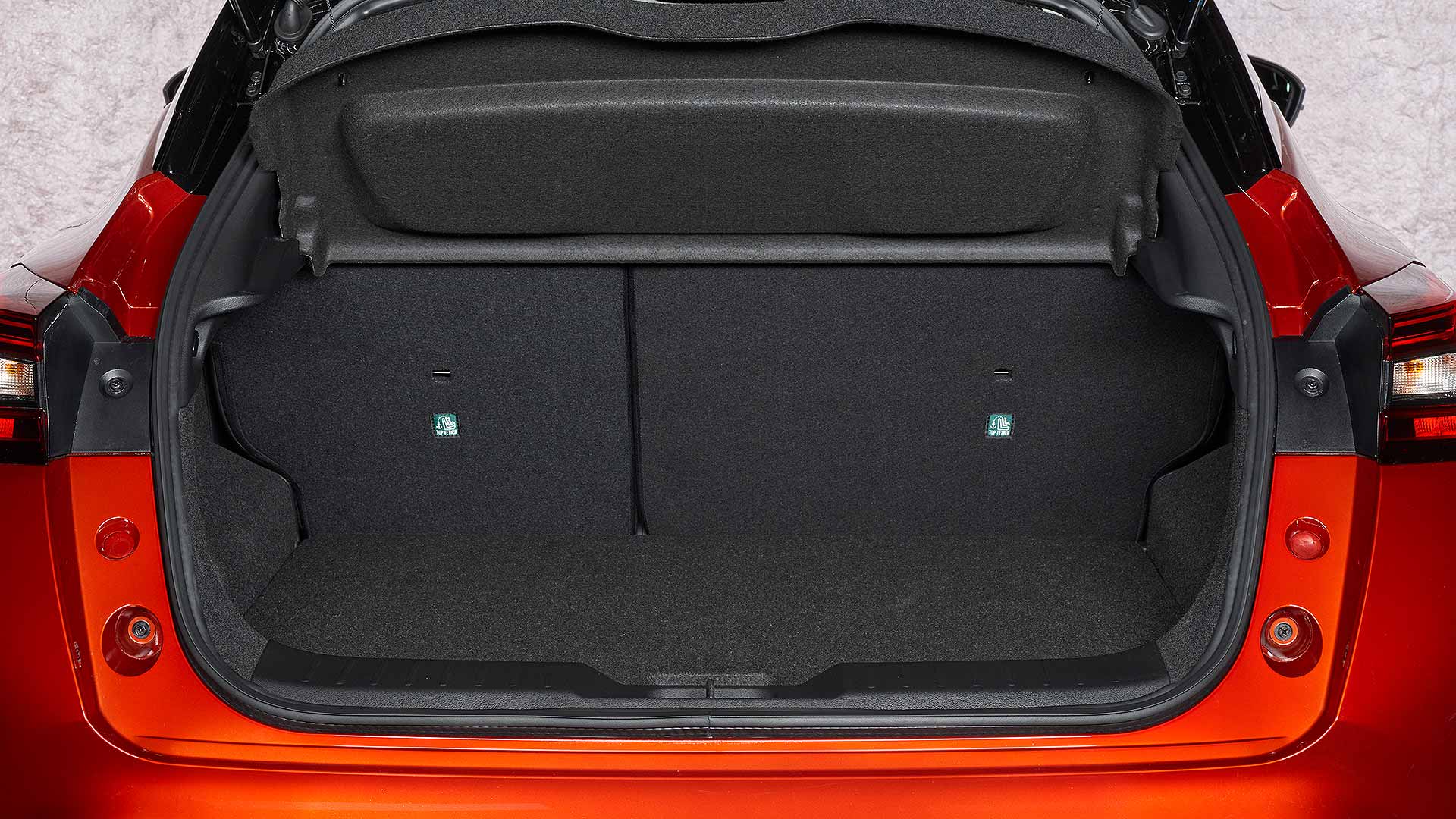 The dashboard has been turned from cheap and plasticky into plush and premium. The stitched soft-touch surface is tactile, as is the leather steering wheel, and even the hard plastics elsewhere are less scratchy. The coloured plastic panel around the gearlever has gone; in comes more soft trim and ambient lighting. Much more upmarket. 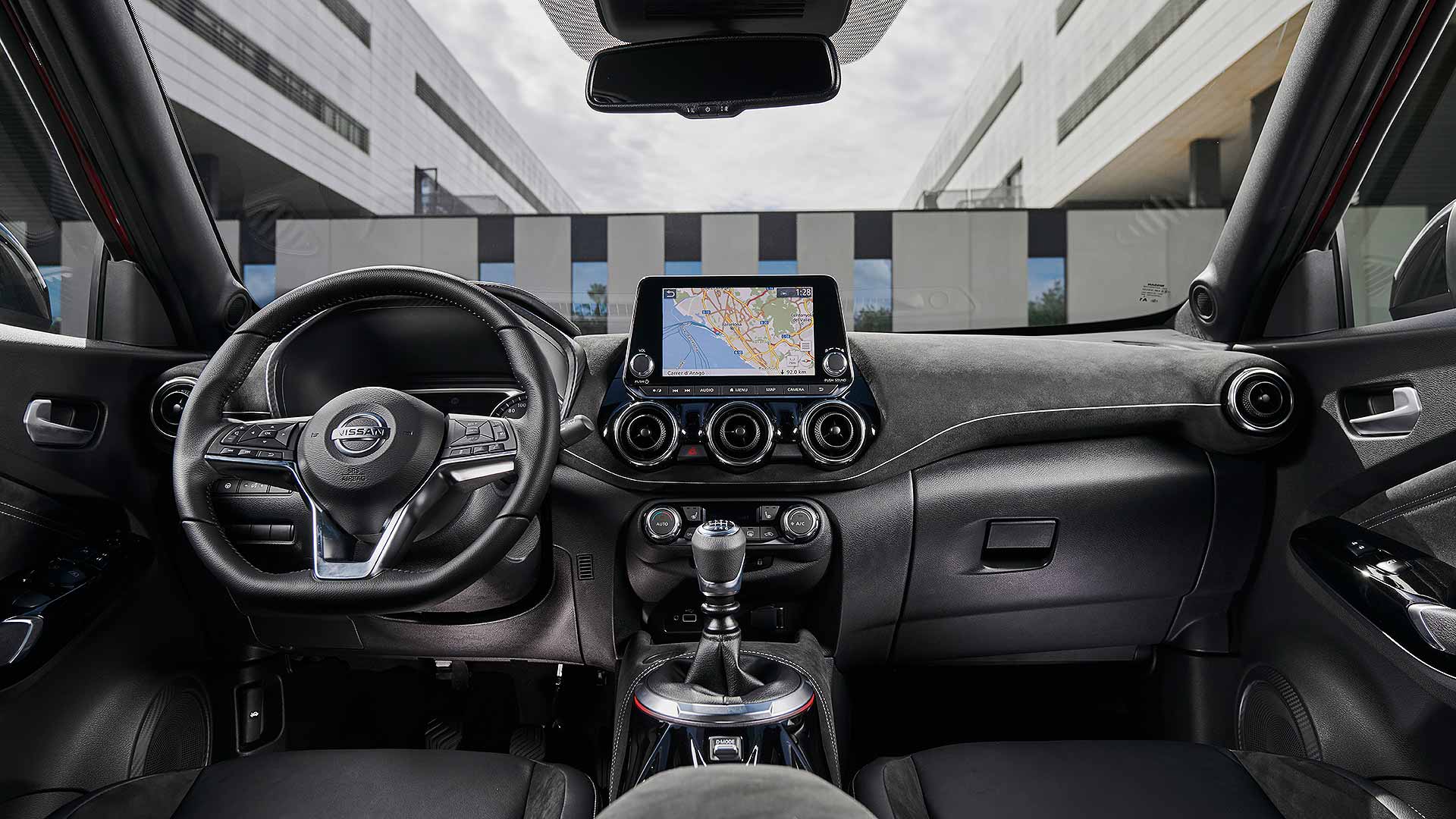 All but base-spec Visia have a crisp 8.0-inch touchscreen which looks less stuck on than some. It has Apple CarPlay, Android Auto, and also communicates with a Nissan smartphone app. And with a Google Home device, so you can speak commands to it, or the kids can ask it to flash the lights and sound the horn, to their endless amusement.

This is a sector first and Nissan plans to further develop what you can do with and to your Juke through Google Home. There was even someone from Google on the launch event: watch this space, they tell us (and visit your dealer for a first hands-on of it). Other tech highlights are onboard wi-fi (you buy add-on data plans) and Bose ‘UltraNearField’ speakers built into the front seat headrests. 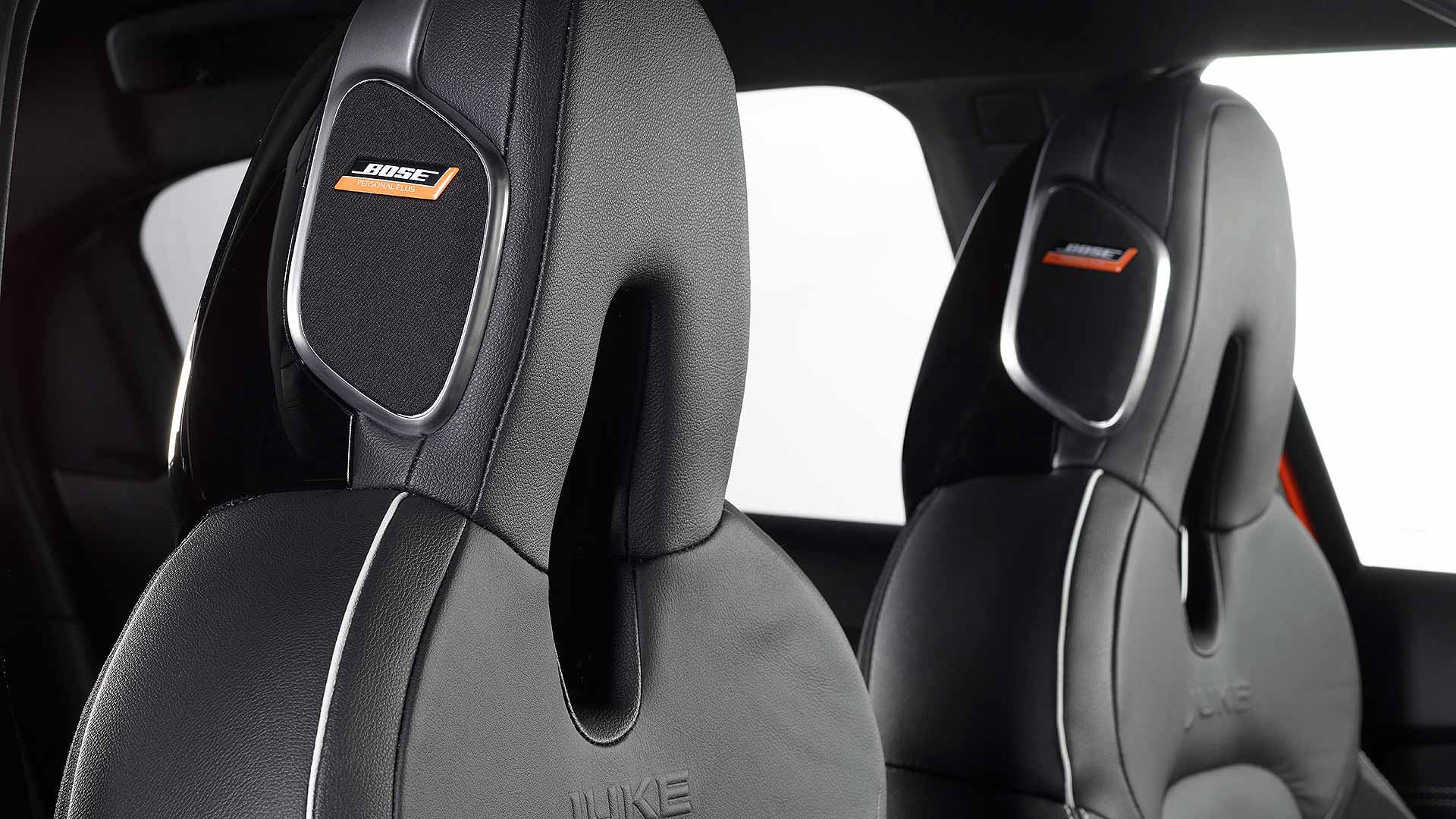 It’s more grown up to sit in. Passengers look out over a high, wide bonnet, sat a bit taller than a normal car, cocooned confidently inside; you feel positioned deep within it, high sides and centre console protecting you. Visibility is better (the windscreen pillars are thinner) although the new Juke does feel a bit wider than before, which might initially affect in-town threadability.

It shouldn’t be a surprise to discover it drives in a more mature way. Gone is the old one’s rough ride, certainly on admittedly smooth Spanish roads. There’s more compliance, more comfort – which is particularly impressive as test cars had largest-possible 19-inch alloys. If this sort of comfort makes it to the UK, it will be one of the Juke’s biggest strengths: because big wheels are a must-have, right? 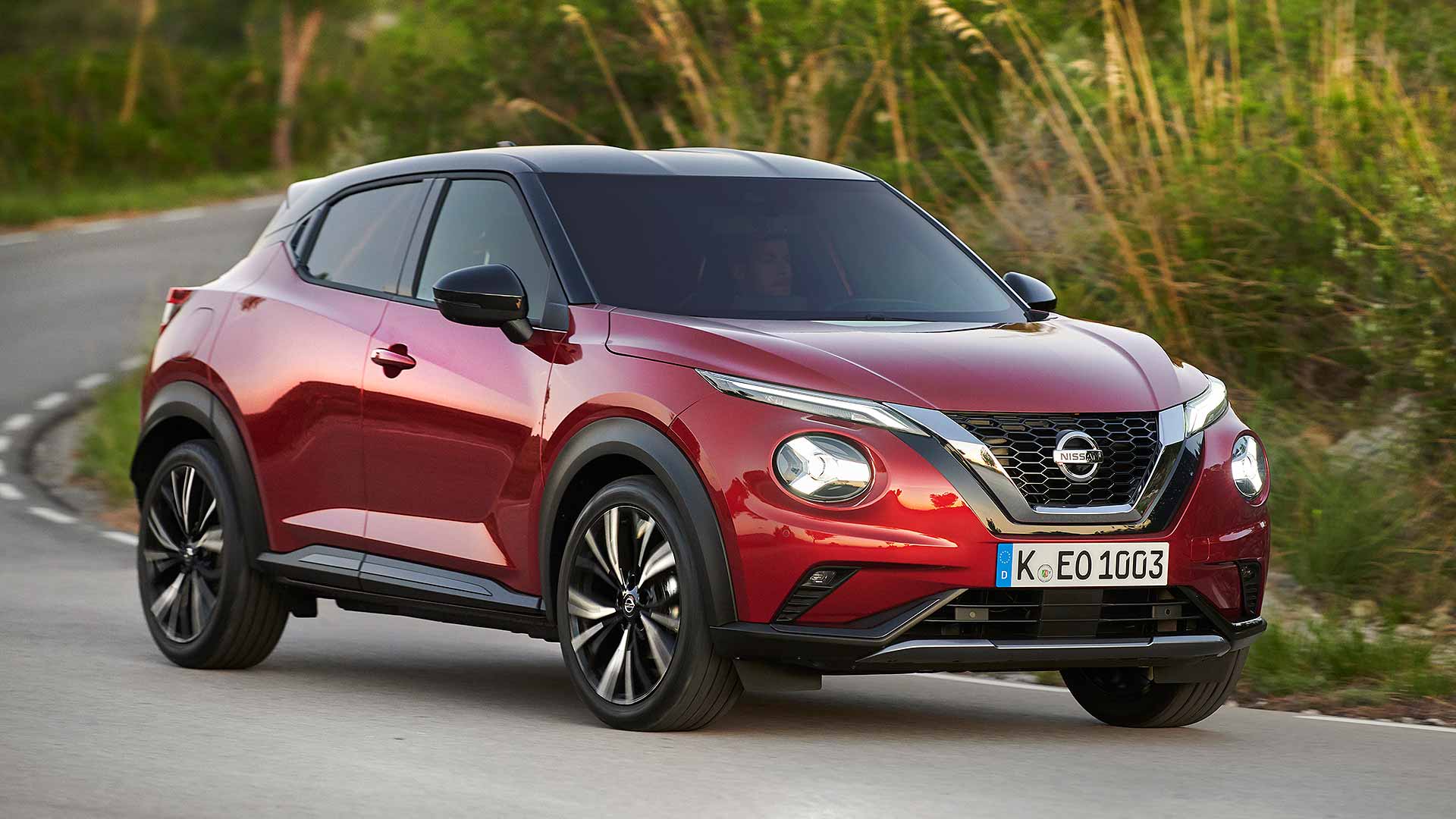 Steering feels nice, less vague than before, and it handles in a measured way, not leaning too much or floating across twisting roads. Press a button by the gearlever to engage sport mode; it makes the steering heavier and the accelerator pedal snappier. It’s also makes the optional DCT automatic more eager; the other extreme, eco, keeps revs eco-low.

Gearbox type is the only mechanical option with the new Juke: all have a 117hp 1.0-litre DIG-T petrol engine (there won’t be a new Juke diesel). It’s a smooth and surprisingly charismatic engine, with a nice three-cylinder throb and commendable pull from low engine revs. Those trading up from the rough old 1.6-litre will be amazed by how much nicer to use this engine is.

Nissan’s sums say there’s 15 percent more performance, 30 percent less CO2. It averages from 45.6 to 47.9mpg, and the auto is only worse than the manual by 1.5mpg. The engine even has an overboost function: put your foot to the floor and you get a bit more surge for 25 seconds. 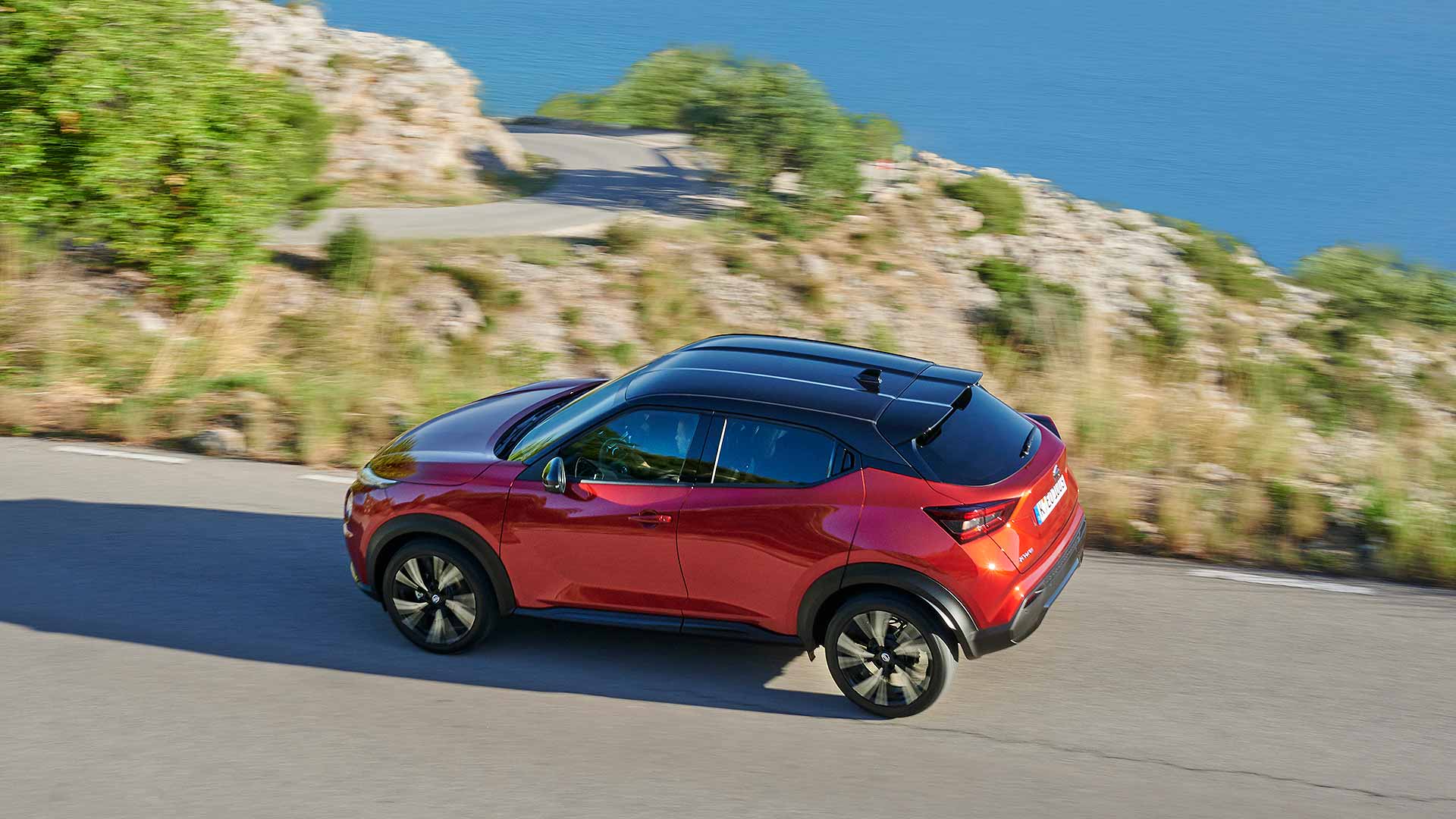 I liked the six-speed manual. The high-mounted gearlever is snappy, yet the engine pulls up hills even if you can’t be bothered to change down. The seven-speed paddleshift auto was OK, with imperceptible gearshifts, but it often found itself in too high a gear on twisting roads, even in Sport mode. Brakes felt confident and there is a standard electronic handbrake, with hill-hold button.

The new Juke is refined, filtering out engine and road noise; Nissan said the window seals were not yet production spec, so it rustled a bit at speed, but was still otherwise OK. The structure feels more robust too – the trim doesn’t creak when you fly over rough surfaces – which adds to the premium, substantial impression. The long travel suspension’s supple ride also does this.

Nissan’s ProPilot driver assist is available (only available on autos, though). It gives steering-assist cruise control on motorways; it’s not a self-driving Juke, but it’s an early taste of one, and is an safety add-on, if still far from fully-formed. 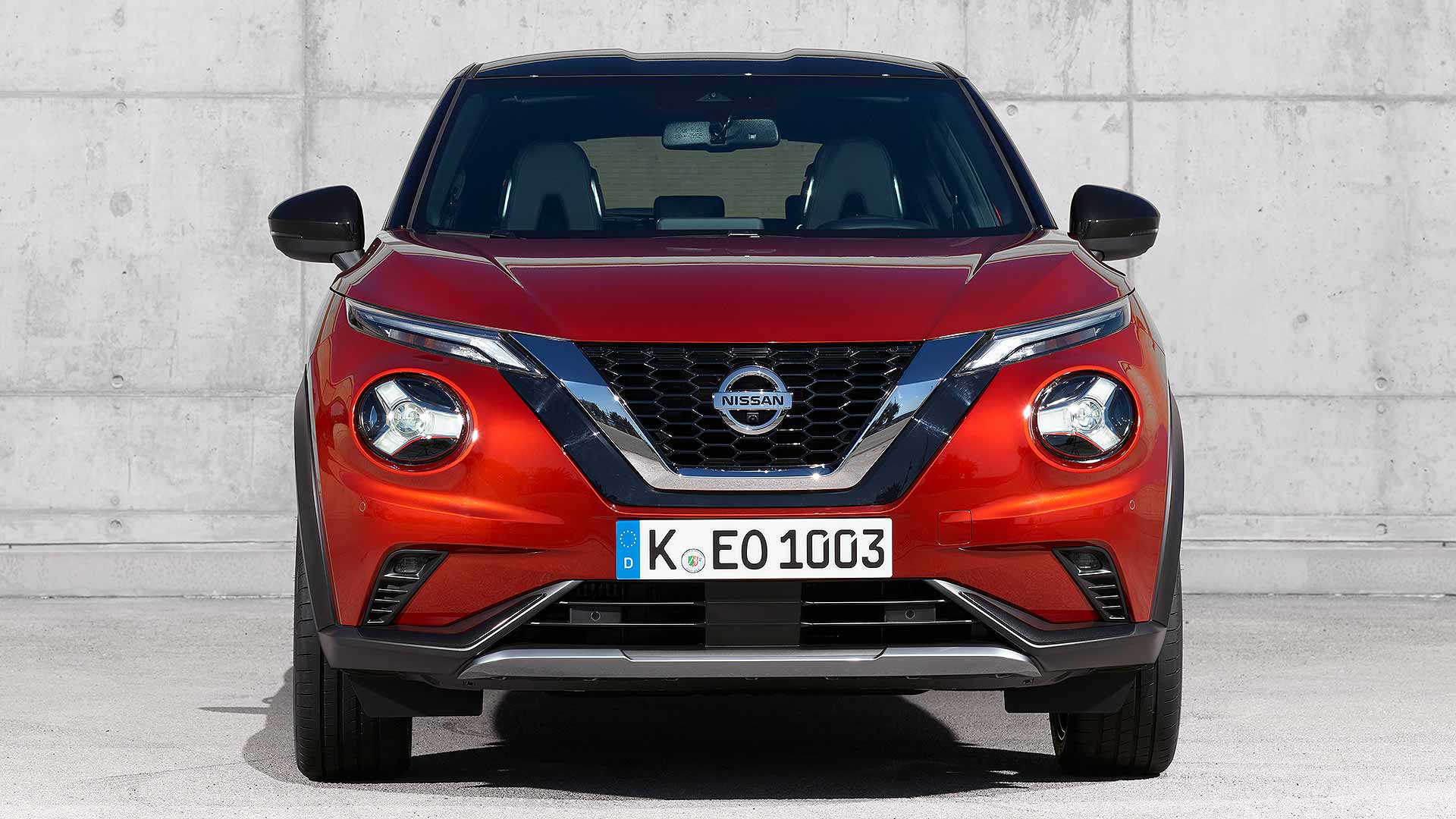 What’s not to like? At first glance, little. Nissan was worried about losing the old car’s agility, but the gains in comfort far outweigh any loss in the fun factor. Besides, I didn’t perceive any, particularly now the engine is far more pleasant.

Space in the back is finally fine, the boot’s usable, and cabin quality give it a pronounced lift. Visually, it’s still ‘Juke’; but new colours, much richer detailing and its extra size mean you won’t confuse new for old (or prefer old to new). 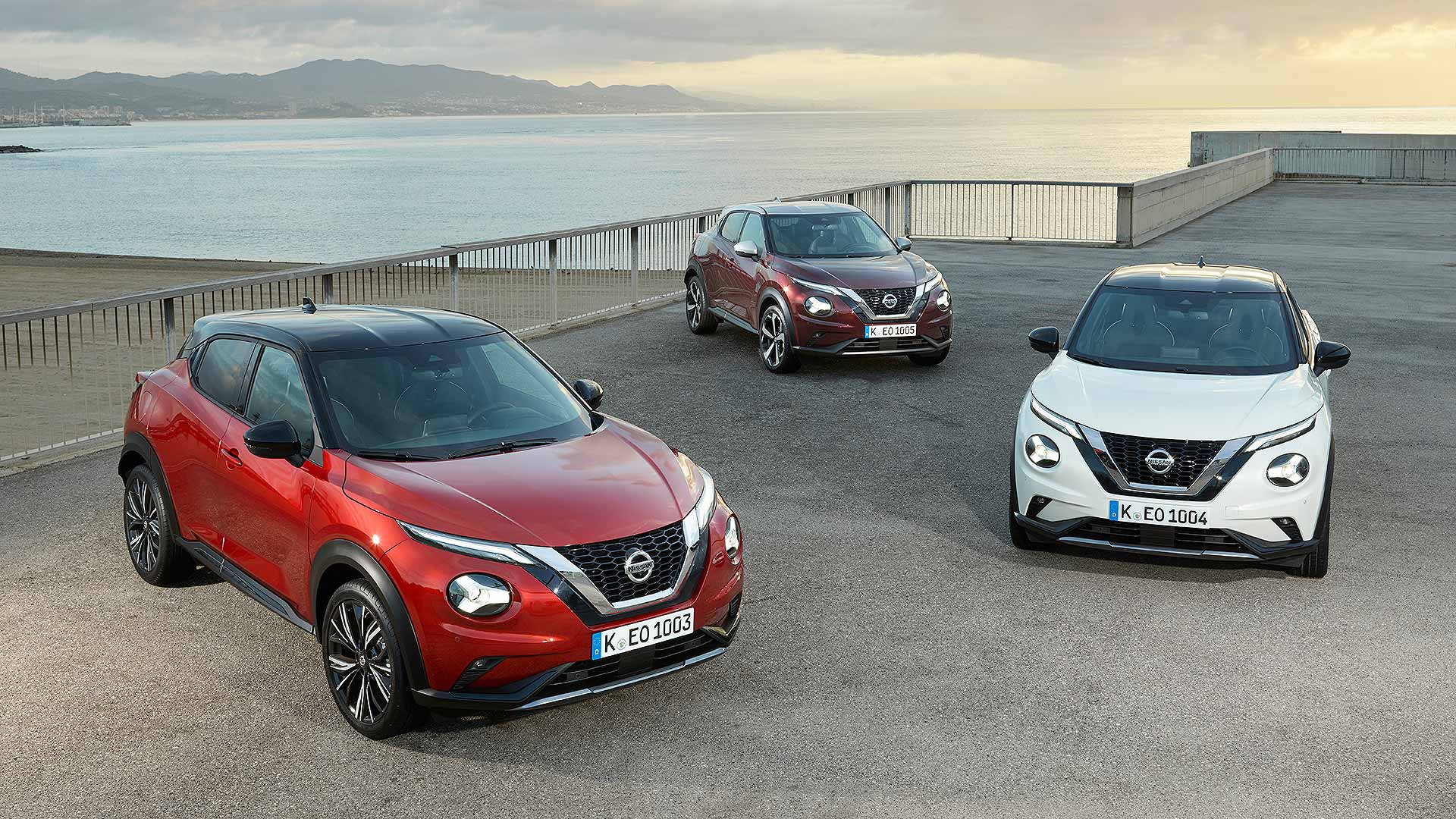 Unlike the first time, the new Juke doesn’t aim to surprise. It wants to satisfy, maintaining the original’s distinctiveness but adding the hygiene factors it lacked. It will be a nicer, easier car to live with, a safer one and, with its class-leading suite of tech, a smarter and more upgradable one.