The Skoda Scala is here to tempt you away from a Ford Focus, Hyundai i30 or even a Volkswagen Golf. Can it stand out in such a congested sector? 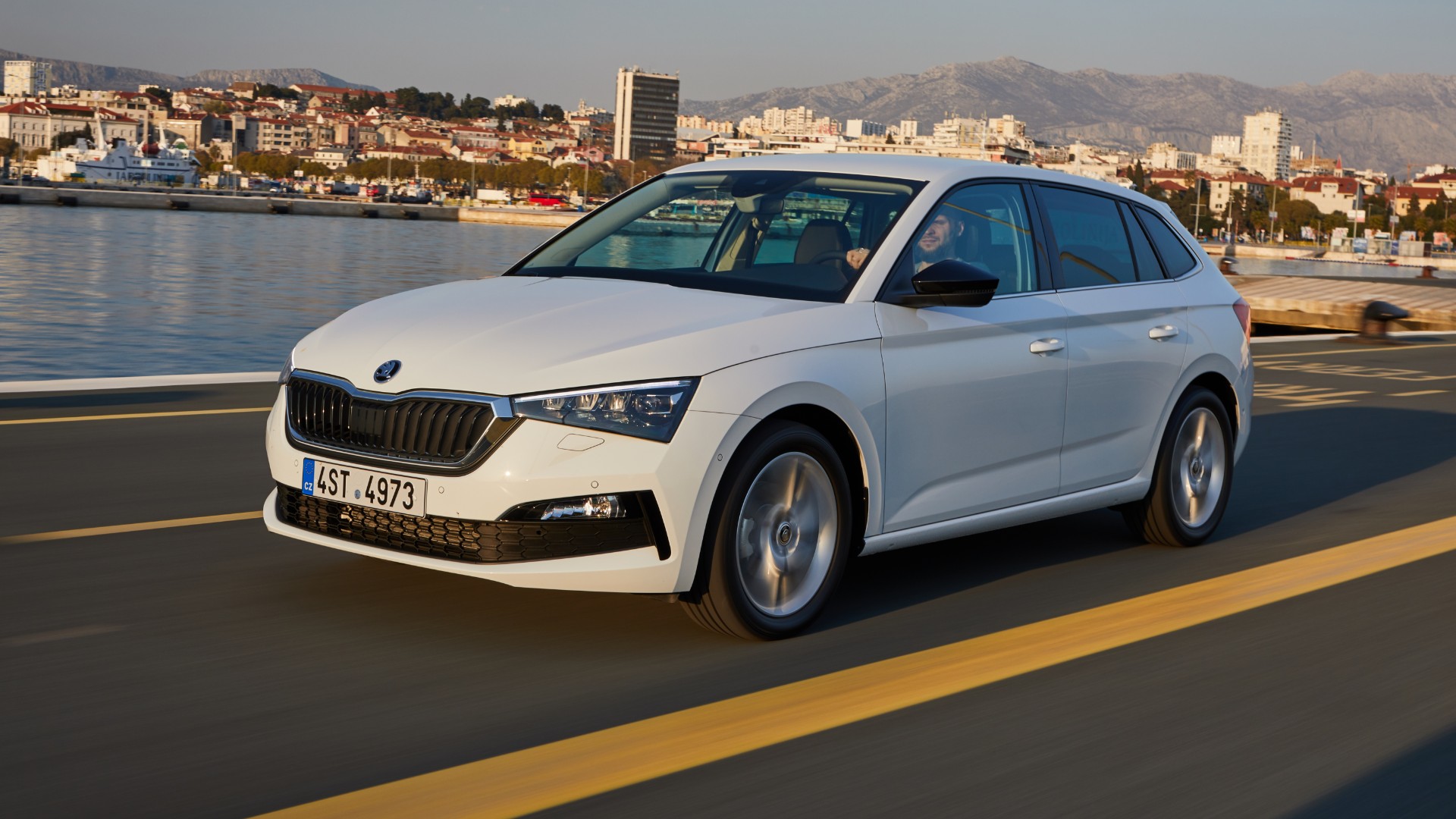 The Skoda Scala is here to tempt you away from a Ford Focus, Hyundai i30 or even a Volkswagen Golf. Can it stand out in such a congested sector?

The Scala is the underdog in Volkswagen Group’s family of mid-size hatchbacks. Next to the premium Audi A3, dependable Volkswagen Golf and sporty Seat Leon, it’s the cheapest of the set.

It starts from £16,595 for the entry-level ’S’ model, although the savings are more ‘premium bond’ than ‘lottery win’ once you reach a desirable spec. The ‘S’ isn’t available yet, anyway.

Preparing my review of the Scala. Quite like the looks. pic.twitter.com/b8Ah68yHXi

The Scala is handsome car with its fair share of double-take visual quirks. The way the black roof slopes down to end atop the number plate is neat. The lighting is a sleek and classy affair, too.

Inside, the cabin is familiar as you might expect, although the dashboard is distinctive enough to avoid VW Group déjà vu. It’s certainly a step on from the old Rapid, but remains a bit bland.

The tablet-style touchscreen has a more premium look than some German executive cars with a similar setup. As standard, you get a 6.5-inch display, but SE specification is worth the upgrade for the eight-inch version. Stepping up to SE-L brings a nine-inch screen with sat-nav and digital dials (pictured below).

Apple CarPlay wasn’t working in the Skoda this morning. Now I’ve got this. Boo. pic.twitter.com/MfPRUP10MJ

The interface has slightly aged, hand-me-down Golf visuals, but is intuitive and responsive. MR’s Richard Aucock did experience a few system crashes, though, so it’s not perfect.

The Scala’s cabin is spacious and easy to see out of. Its rear seats will accommodate two adults with ease, although three might feel a little cramped. The broad boot holds 467 litres. 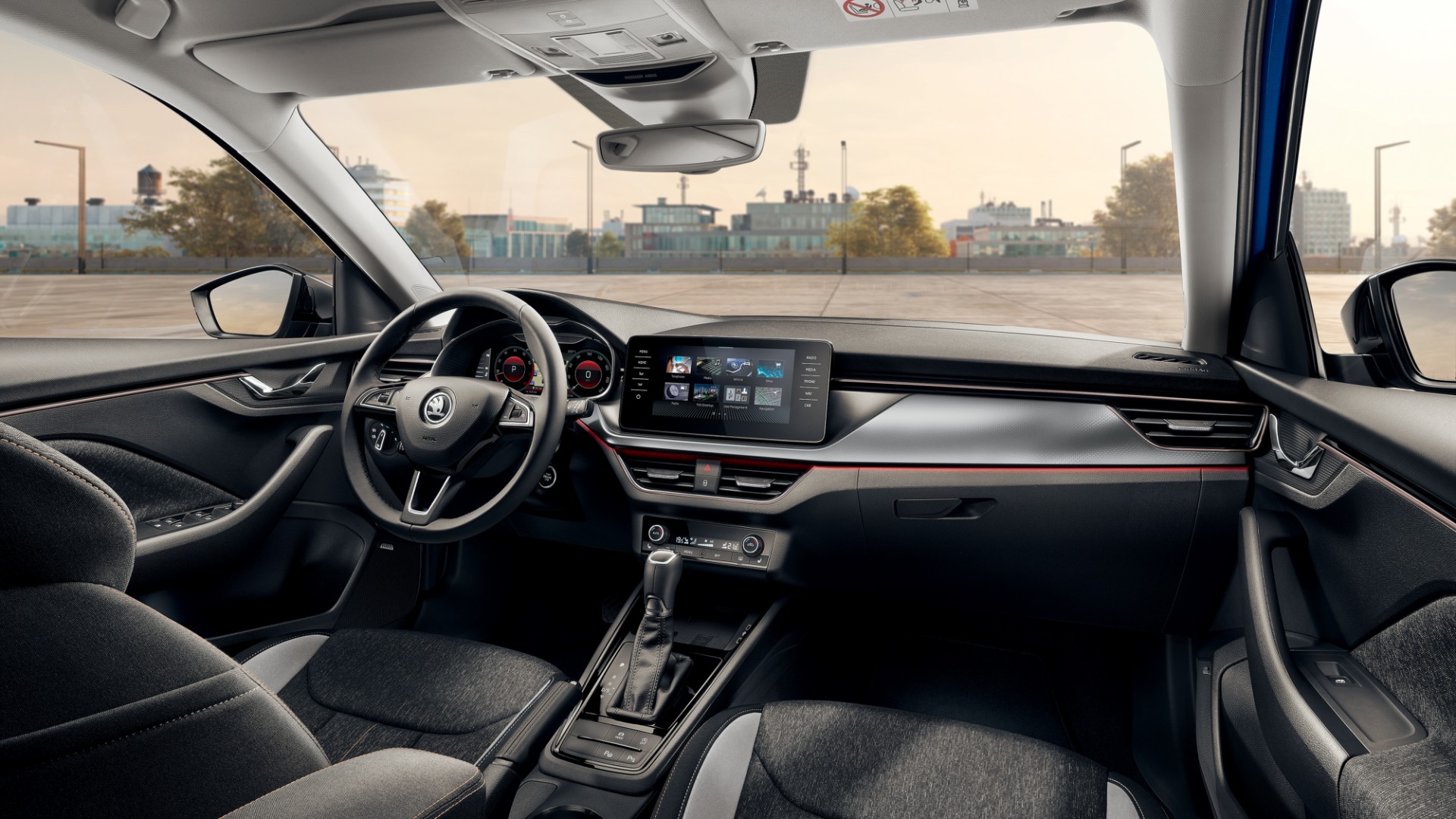 Quality is better than most rivals at this price, and not too far off its premium Group-mates. There are plenty of soft-touch plastics and it feels well made.

Fire up the Scala – with a traditional key – and the 1.5-litre TSI thrums into life. Our car came with the automatic gearbox, so a smooth glide into D set us on our way.

A ride out to Kings Lynn from the Suffolk border to see The Lion King is exactly the sort of journey a family hatch like the Scala should excel at. We saw more than 50mpg from the little TSI petrol motor on the run. Who misses diesel? 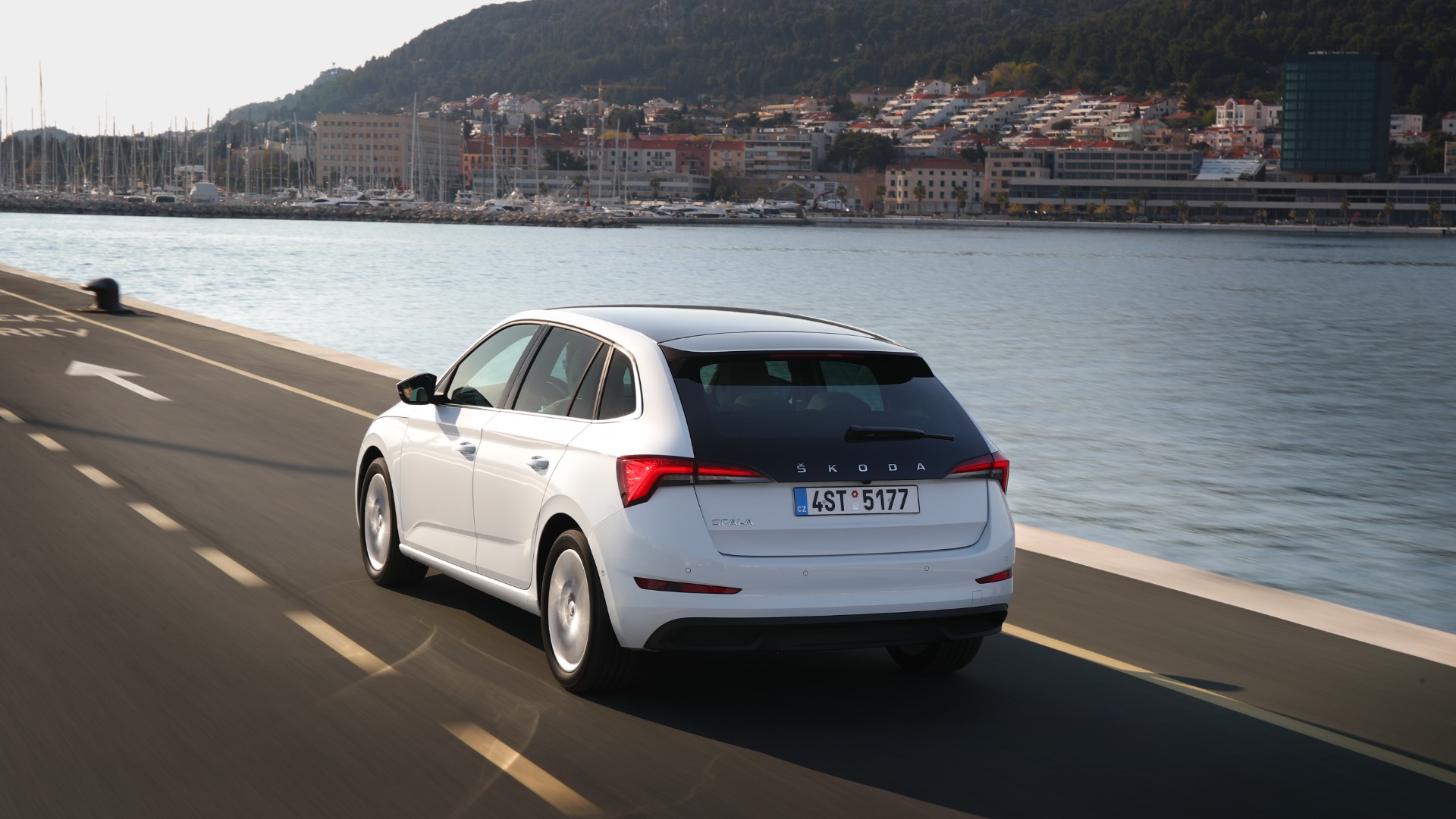 Its performance is more kitten than big cat, but those keen for more can wait for the forthcoming vRS version.

The Scala could swap between ratios with a little more grace and its automatic gearbox is easy to confuse at lower speeds. It even juddered like it had a slipping clutch, on multiple occasions. Not so ‘Simply Clever’, then.

There are no steering wheel paddles, but a bump of the shifter to the left allows you shift gears manually. 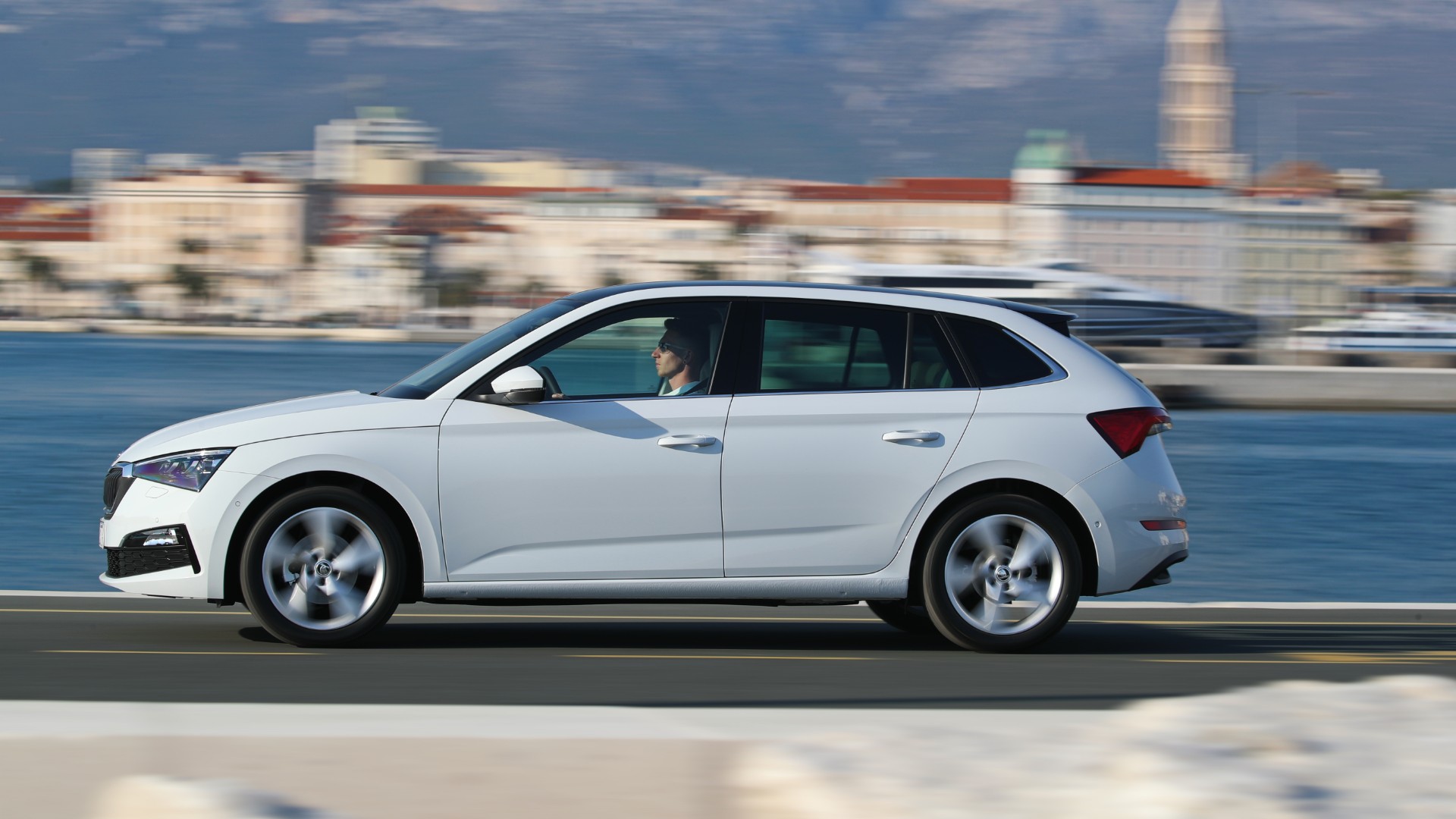 Also irritating was the lane-assist steering system. For reasons unknown, it would bleep, rumble and flash as if we were driving ‘hands-off’. This happened unprompted on multiple occasions.

In terms of handling, the Scala is inoffensive, but the Mazda 3 and Ford Focus are possessed of more poise. The ride is exceptional, though. Small wheels and soft suspension make it refreshingly doughy.

Body-roll that sees the door handles reaching for the tarmac is a side effect to note, so beware when transiting kids with tummies full of popcorn. 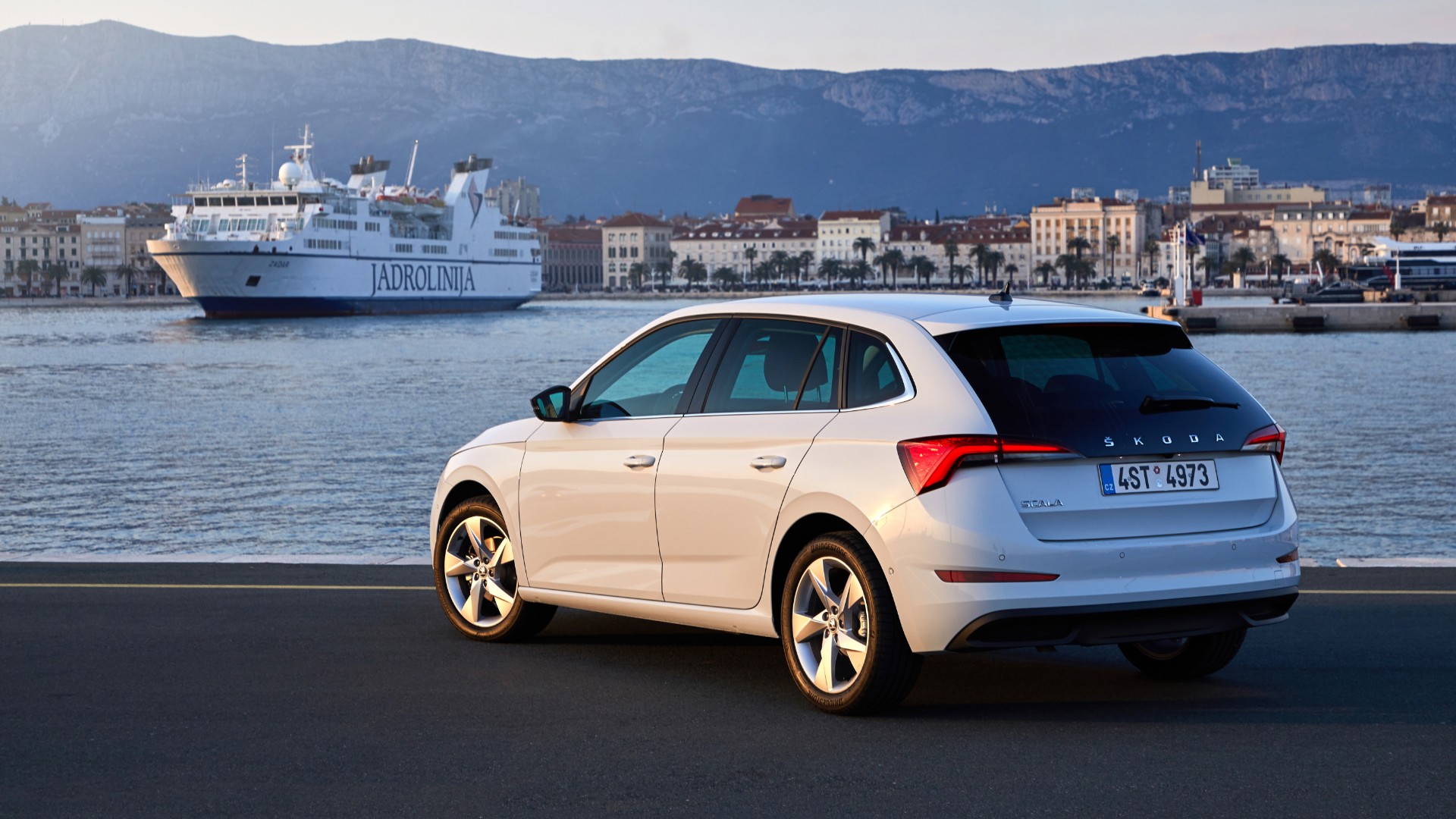 Overall, the Scala makes a good go of being a practical and well-equipped family car. It’s a little rough around the edges, though, and not as affordable as you might hope

Indeed, climb the Scala ladder and the price gets very Golf-ish. Ours topped £20,000. Go for the six-speed manual gearbox and a petrol engine and it’s a fine little car. But it doesn’t stand out. 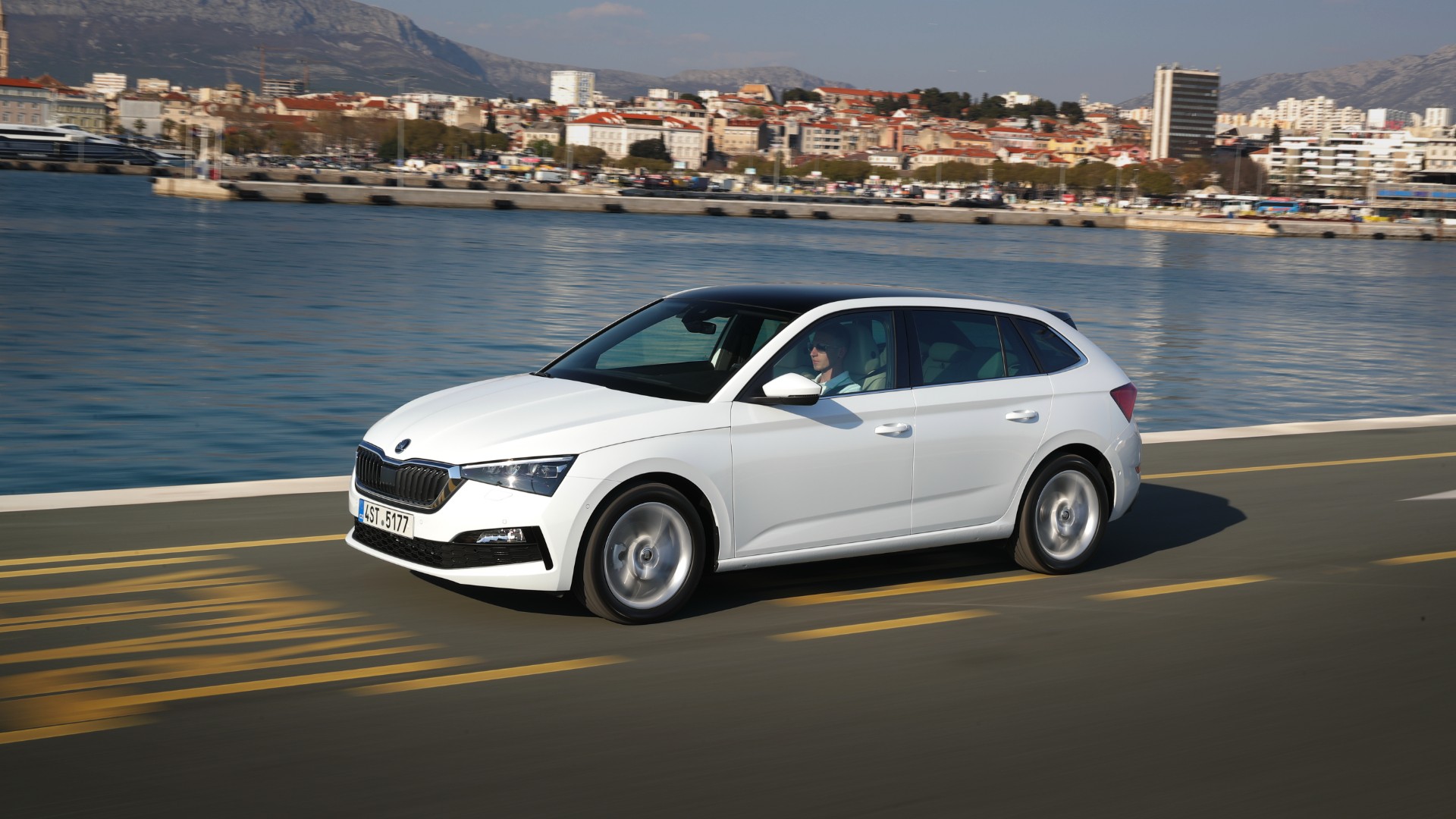 Winter driving: how to prepare you and your car