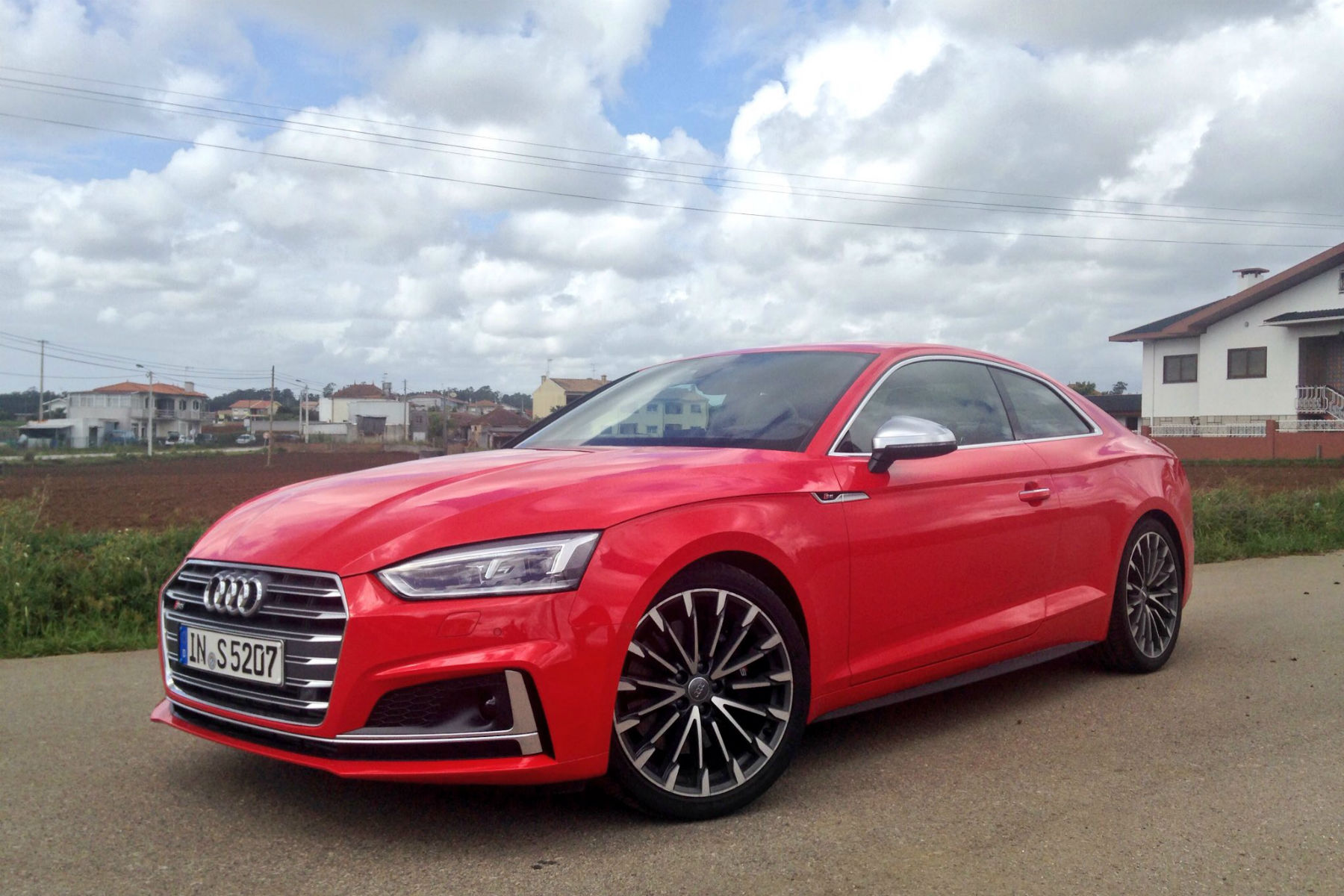 Depending on who you talk to, A5 is either a small piece of paper, a busy dual carriageway between west London and Wales or an attractive four-seat coupe based on the Audi A4. With more than a million sold since 2007, we’d wager most people would think of the latter.

The new 2016 A5 has sharper styling and Audi promises improved driving dynamics. But we’ll get to the subjective stuff shortly. Let’s start with some facts.

The A5 coupe is available to order from late summer and arrives in showrooms in November. The five-door Sportback version follows in January 2017, then the A5 Cabriolet several months after that. Prices weren’t confirmed at the time of writing, but are said to be ‘on par’ with the outgoing car. That means from around £32,000 for the coupe and Sportback, and £44,000 for the sporty S5.

Buyers can pick from six-speed manual or seven-speed S tronic semi-auto transmissions, with an eight-speed auto standard on the 3.0 TDI and S5. In trad-Audi style, there’s also a choice of front- or four-wheel drive.

Keeping up? Just wait until you’re faced with the lengthy options list….

More muscular in the metal

How the A5 looks is vitally important; it’s the main reason for choosing one over the cheaper and more practical A4 saloon.

Audi has been criticised for its ‘same-again’ styling, but when your template is as handsome as the old A5 – designer Walter de Silva called it his ‘masterpiece’ – that’s no bad thing.

The 2016 car appears similar in pictures, but see it in the metal, as we did at the international launch in Portugal, and the differences really stand out. Most obvious is the bulging bonnet, with a pronounced ‘power dome’ that hints at a potent engine below. The S5 delivers on that promise, the 2.0 diesel… less so.

The jutting front grille is wider and lower, too, while hawkish headlights share their LED signature with the TT. Top-spec S line versions have full LED headlights as standard.

Bolder bodywork creases and aluminium accents aft of the front wheels are the main changes at the sides. Audi geeks will also spot the mirrors, which have moved from the windscreen pillars to the doors. The trademark chunky C-pillar remains: a nod to the original – and much-loved – ur-Quattro of 1980.

The rear of the car is less distinctive, perhaps a bit dull, although the S5 gains a small lip spoiler and racing-inspired diffuser. We can’t fault the aerodynamics, though. A drag coefficient of 0.25 makes the A5 the slipperiest car in its class.

Any other interior is inferior

Before we drive the new A5, it’s worth dwelling on its interior. We were bowled over by the latest A4’s cabin, and the A5 shares all the same hardware.

Everything you see reeks of obsessive attention to detail. From the touch-sensitive heater controls to the reassuring ‘clunk’ of the paddle shifters, you feel it with your fingers, too. Only the Mercedes-Benz C-class comes close for perceived quality; BMW and Jaguar are miles away.

Audi’s fabulous-looking Virtual Cockpit, which swaps traditional dials for a customisable 12.3in TFT screen, is available in the A5 for the first time – albeit as an extra-cost option (likely to be £450). Its chief benefit is that you can display the navigation map behind the steering wheel, leaving the central 8.3in screen free for entertainment functions. In the S5, you can also select a Lexus LFA-style digital rev counter: not useful, but very cool.

The MMI media system gains a touchpad on top of the rotary ‘clickwheel’ controller, which responds to smartphone-style swipe and pinch gestures. However, it’s tricky to operate on the move and feels like overkill on a system that’s already very intuitive to use.

Opt for Audi Connect (price: TBC) and you get in-car internet with a flat-fee for data usage, wherever you drive in Europe, during the first three years. It also transforms your car into a mobile wi-fi hotspot, which should please the kids on long journeys.

Gracious and (quite) spacious

Coupes inevitably sacrifice space for style, but the A5 is pretty practical for a car of its type. Boot capacity of 465 litres (up 10 litres) is much better than the 305 litres you can squeeze into an Audi TT, plus it trumps the rival BMW 4 Series (370 litres) and Mercedes C-class coupe (400 litres). You can also fold the rear seats for longer loads.

Audi says a stretched wheelbase has liberated more space for people, although the A5 remains a strict four-seater. There’s ample room in the front, with a wide range of adjustment for the driving position. Anyone up to 5ft 10in can get comfortable in the back – once they’ve squeezed in. If you regularly carry more than one passenger, the forthcoming five-door Sportback is a no-brainer.

We start our test-drive in the 190hp 2.0 diesel, a car that’s likely to account for the majority of A5 sales.

Only a few months ago, diesel was front-page news. But while the ‘dieselgate’ scandal has tarnished Volkswagen’s reputation, sister-brand Audi has escaped almost unscathed.

It certainly isn’t hard to see the appeal of the 2.0 TDI on paper. It hits 62mph in a brisk 7.7 seconds, yet delivers official fuel economy of 68.9mpg –  impressive stats for a premium coupe. CO2 emissions of 114g/km equate to free car tax (VED) in the first year and just £30 thereafter.

On the road, the entry-level diesel is remarkably quiet. There’s enough mid-range punch for overtaking and the S tronic gearbox shifts smoothly (Audi didn’t supply any manual cars at the launch).

Many A5s will spend much of their lives clocking up motorway miles, a job the 2.0 diesel handles with aplomb. Where it falls down, however, is when the tarmac gets twisty. Anyone expecting a sporty coupe will be disappointed; the A5 is well-balanced and confidence-inspiring, with feelsome steering that’s a vast improvement on the outgoing car. But ultimately it feels like a two-door A4, rather than a plus-sized TT.

Let’s hope the hot S5 is a little more engaging…

All aboard the S-express

With a 354 horses to its name, the S5 is altogether more serious: a car to tame Germany’s Autobahns, and – hopefully – some Portuguese B-roads into the bargain.

One in four A5s sold last year was either an S5 or RS5 (the new RS5 arrives in 2017), so this is more than just a loss-leading halo model. And Audi is keen to stress its credentials as a ‘proper’ performance car, citing its lightweight new V6, Quattro four-wheel drive and specially tuned sports suspension.

The first thing you notice is the torque – maximum oomph arrives at just 1,370rpm, so you don’t need to work the engine hard to make swift progress. In this respect, the twin-scroll turbocharger makes the S5 feel like a muscular diesel: punchy and effortless. The price you pay, of course, is the absence of high-rev drama – the heady rush to the redline that characterises many powerful naturally-aspirated petrols.

The S5 is certainly quick, though; 62mph arrives in 4.7 seconds and top speed is limited to 155mph. It also sounds good, a subtle growl that builds to a cultured howl, with cheeky pops and farts from the four exhaust tailpipes when you shift gears in Dynamic mode.

Our test S5 was fitted with the optional Continuous Damper Control (CDC), which adjusts ride stiffness according to the driver inputs and the road surface. Even so, on 19in alloy wheels, the car thudded uncomfortably through low-speed potholes and felt pattery on uneven asphalt at speed.

Turn-in is confident and body-roll well contained, but the S5 isn’t malleable like an M4 or riotously playful like a C63 AMG. Perhaps we shouldn’t expect it to be – this isn’t the full-fat RS5, remember. Nonetheless, while the S5 is an easy car to admire, it’s a difficult car to love.

Still a class act, but not for everyone

The latest A5 is still a handsome beast, although its design is fussier and less elegant than before. As with the second-generation TT, you get the impression Audi struggled to improve on a ‘masterpiece’, and simply made changes for their own sake.

In all other respects, however, the 2016 A5 builds on the strengths of its predecessor. It’s refined, efficient, superbly built and even relatively practical. As an executive express for life in the outside lane, plus Sunday jaunts to the golf club, it takes some beating.

Beauty is also defined by the details, of course, and in that respect the A5 has got it licked. It’s a thoroughly ‘premium’ car, with an interior that wouldn’t feel out of place in something twice or even three times the price.

We drove the models that bookend the range, the 2.0 TDI and S5, and it was the entry-level diesel that felt most comfortable in its own skin. Its punchy power delivery encourages you to make relaxed progress without pushing too hard and exposing the limitations of the chassis. So, cheaper is better: you heard it here first.

If you live in North Wales or the Scottish Highlands, the dynamically sharper (and rear-wheel drive) BMW 4 Series will make you smile more often. But for the rest of us, the Audi A5 is the new mid-size premium coupe of choice. At least until the A5 Sportback arrives.

Enjoyable and relaxing to drive

Styling is fussier than before

Not as sporty as some rivals

Many features are expensive options