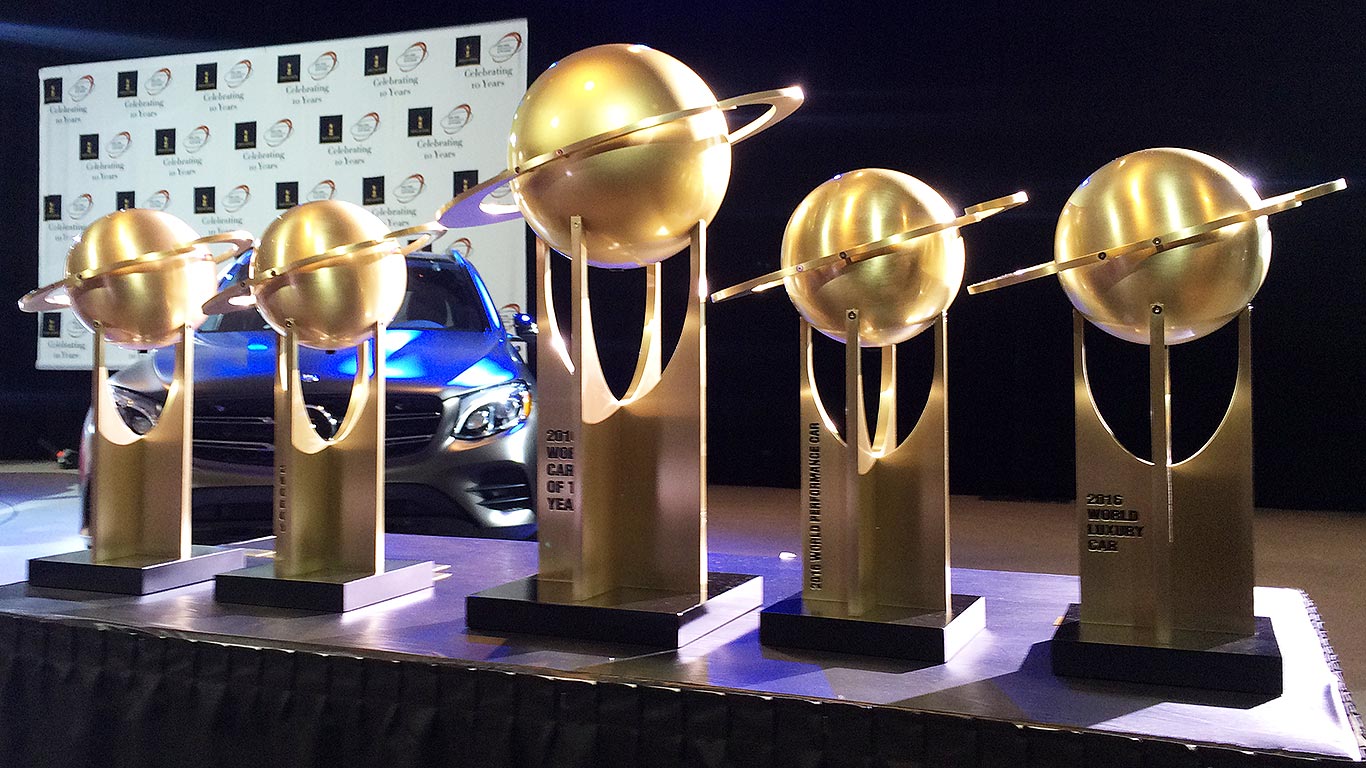 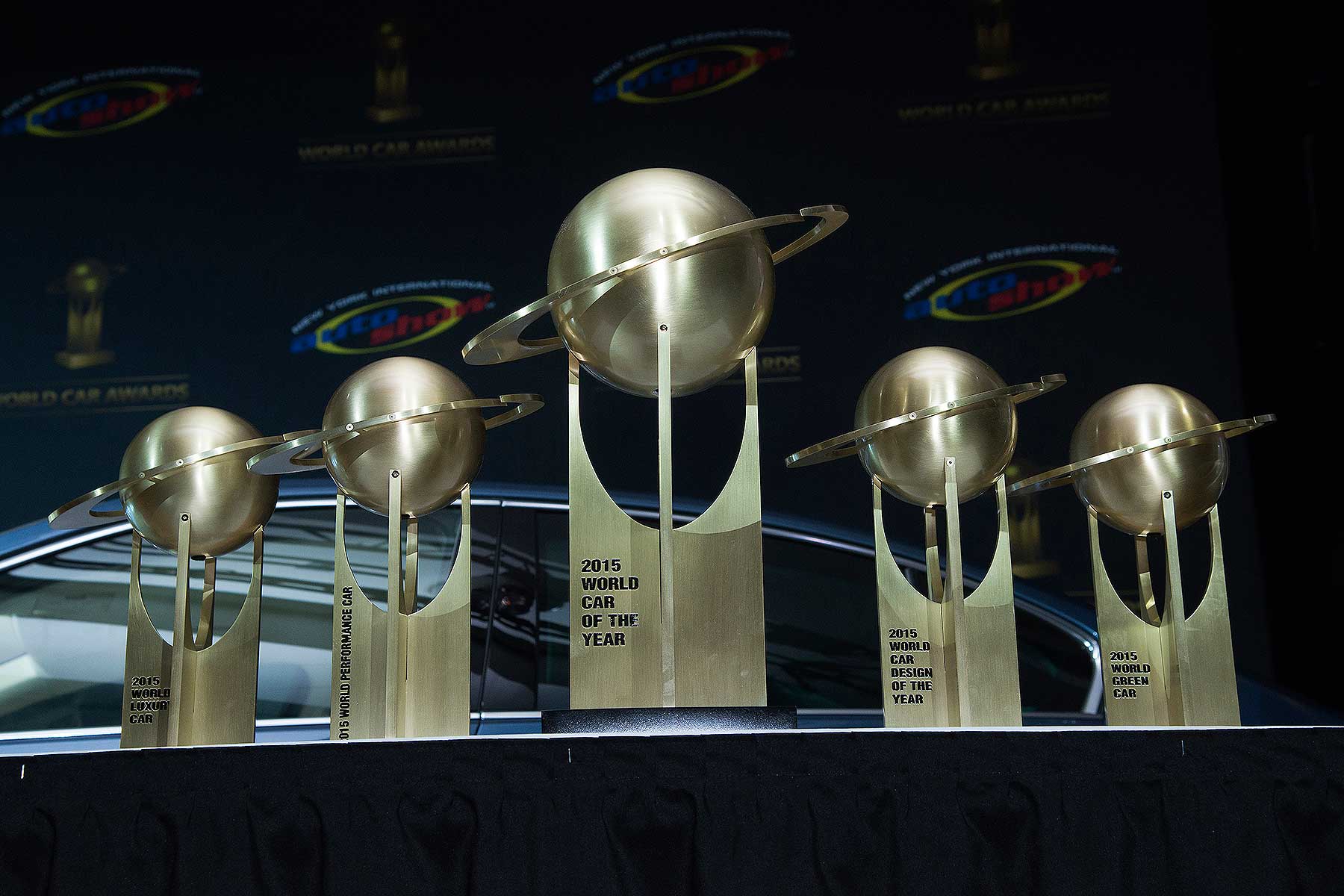 After months of judging, the 2016 World Car Awards have been announced in a glittering ceremony at the New York Auto Show.

The elite of the world’s top auto manufacturers were in attendance, fingers crossed, to see if their model scooped one of the five prizes on offer – including the prestigious overall World Car of the Year Award. We were there too – here’s the winners, revealed.

All cars in the 2016 World Car Awards were launched on at least two continents between 1 January 2015 and 31 May 2016. A 73-strong team of jurors choose an initial entry list of 23 vehicles, which was narrowed down to a shortlist of 10. More recently the ‘Top Three in the World’ list was released, giving the finalists that brings us to the New York Auto Show awards ceremony. So, without further ado…

Performance cars should be thrillers: desirable cars that are a joy to drive. The most powerful Audi ever built, the judges decided that the R8 Coupe is the car that provides the biggest performance buzz in 2016.

“We are delighted that the Audi R8 has been voted as the 2016 World Performance Car,” said Dietmar Voggenreiter, Board Member for Sales and Marketing at Audi AG. “The R8 is one of the strongest calling cards for the four rings and is the flagship car from Audi Sport. The first generation of the R8 paved our way toward becoming a premium brand and raised the aura of Audi to a new level. The new R8 will continue this success story and further accelerate the growth strategy of Audi Sport.”

In the running for World Luxury Car 2016 were the Audi Q7 SUV, BMW 7 Series sedan and Volvo XC90 SUV.

Luxury cars should push boundaries and set standards for high-technology features that can filter down to the rest of the range, believe the World Car Awards jurors. The BMW 7 Series, with no fewer than 25 all-new innovations, thus scoops the prize for 2016.

“We are delighted and honoured that the BMW 7 Series has been recognised as the World Luxury Car of the Year,” said BMW in a statement. “Since it launched last autumn, the response from both the media and our customers has been extremely positive. There can be no doubt that the new BMW 7 Series is an outstanding flagship for the brand, setting new standards in its class.”

The World Car Design 2016 is a two-brand race: the Mazda CX-3 crossover SUV and MX-5 roadster went up against the Jaguar XE mid-size sedan. Six famed design experts from around the world decided the overall winner – which was..?

The judges decided that Mazda’s reinterpretation of the classic MX-5 roadster deserves the overall World Car Design award for 2016. A car that looks way better in the metal than in images, the judge’s experienced eyes rated it top in 2016.

“While I accept this award on behalf of the company, I do so representing every Mazda employee, retail partner and customer around the world who has ever felt the joy of driving a pure roadster,” said Masahiro Moro, president and CEO, Mazda North American Operations, and Managing Executive Officer, Mazda Motor Corporation. “We say ‘Driving Matters’ in our advertising, and we prove it in our cars.”

The judges went for easily the most innovative of the trio, the Toyota Mirai hydrogen fuel cell. The world’s first mass-production hydrogen fuel cell car, it’s a trailblazer that simply too significant and too much of a groundbreaker to ignore.

“Just as Prius changed the world nearly 20 years ago, the hydrogen-powered Mirai is ready to make history,” said Bill Fay, group vice president and general manager, Toyota Division. “With a range of over 300 miles per tank, a refueling time of under five minutes, and emissions that consist only of water vapor, Mirai is leading the world forward toward a more sustainable future.”

World Car of the Year 2016: the finalists

The overall World Car Award 2016 this year saw the Audi A4 Sedan, Mazda MX-5 roadster and Mercedes-Benz GLC mid-size SUV all go up against each other. This is the big prize all makers want to win: last year, it was Mercedes-Benz, with the C-Class. This year, it is…

To cheers throughout the room, Mazda’s MX-5 was crowned World Car of the Year 2016 at the New York ceremony. The glittering prize was received with immense delight by the project team, who’d flown in specially from Japan when they heard they’d been shortlisted… even becoming a Top Three in the World was big news – winning World Car of the Year is simply enormous for this proud, enthusiastic Japanese company.

“What a wonderful honor, to have the Mazda MX-5 named World Car of the Year,” said Masahiro Moro, president and CEO, Mazda North American Operations, and Managing Executive Officer, Mazda Motor Corporation. “As our iconic MX-5 roadster approaches one-million units of production, this award is proof that it is as young, vibrant, fun and relevant as ever.” And now to the rest of the prizes in the World Car Awards 2016.