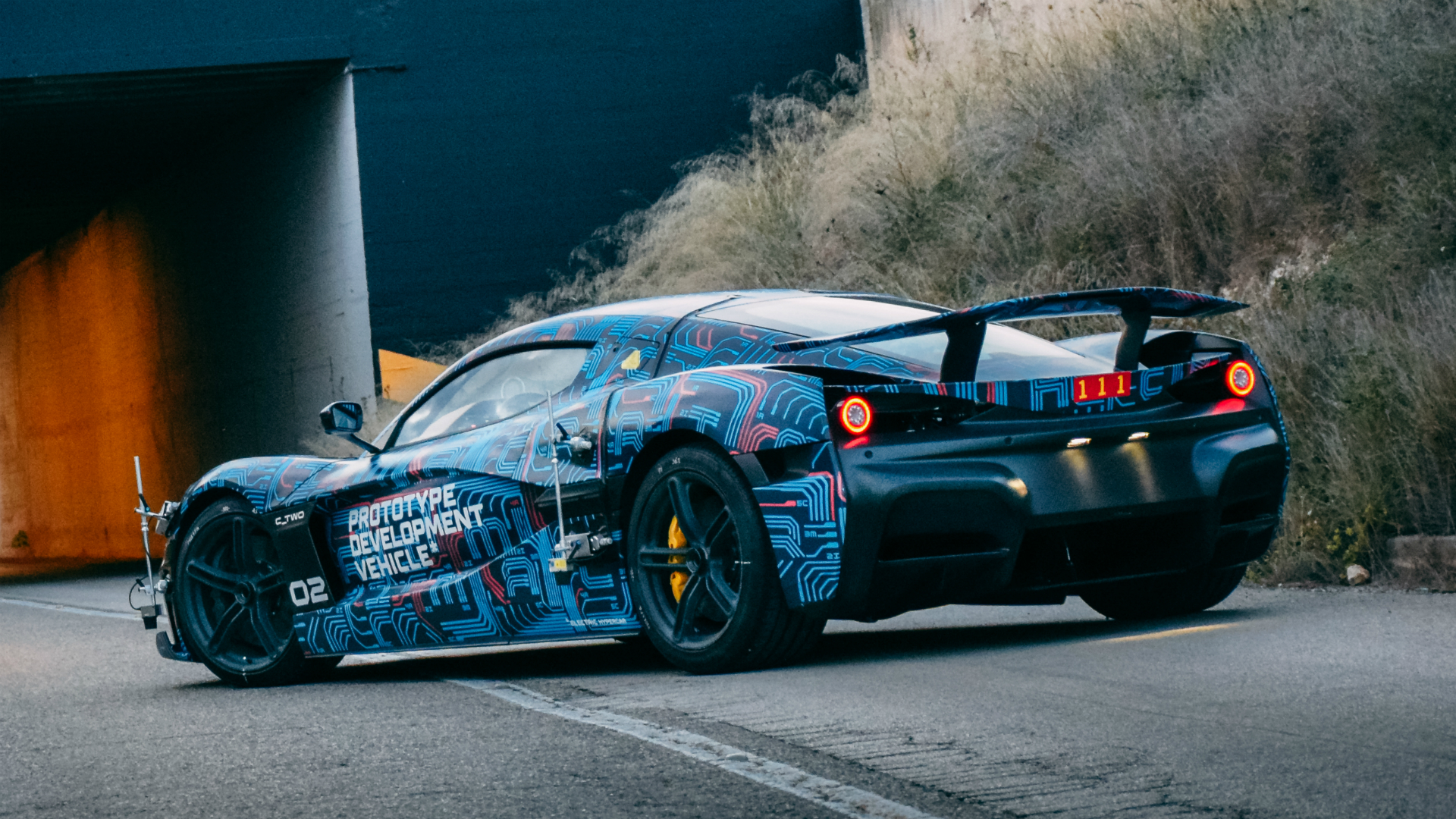 “I am a petrolhead. I get goosebumps whenever I hear a V8,” says Mate Rimac. “But this is the future: a whole new level of capability, speed and excitement.”

The future isn’t quite ready yet, though. The showroom-ready Rimac C_Two – a Croatian-built electric hypercar – will debut at the Geneva Motor Show in March. For now, all we have is a work-in-progress prototype.

Battle-scarred and wrapped in camouflage, it has arrived in London after a month of intensive track testing at Nardo in Italy. And charismatic Rimac (say it ‘Ri-mats’) founder and CEO Mate (‘Mat-tay’) is giving me a guided tour. 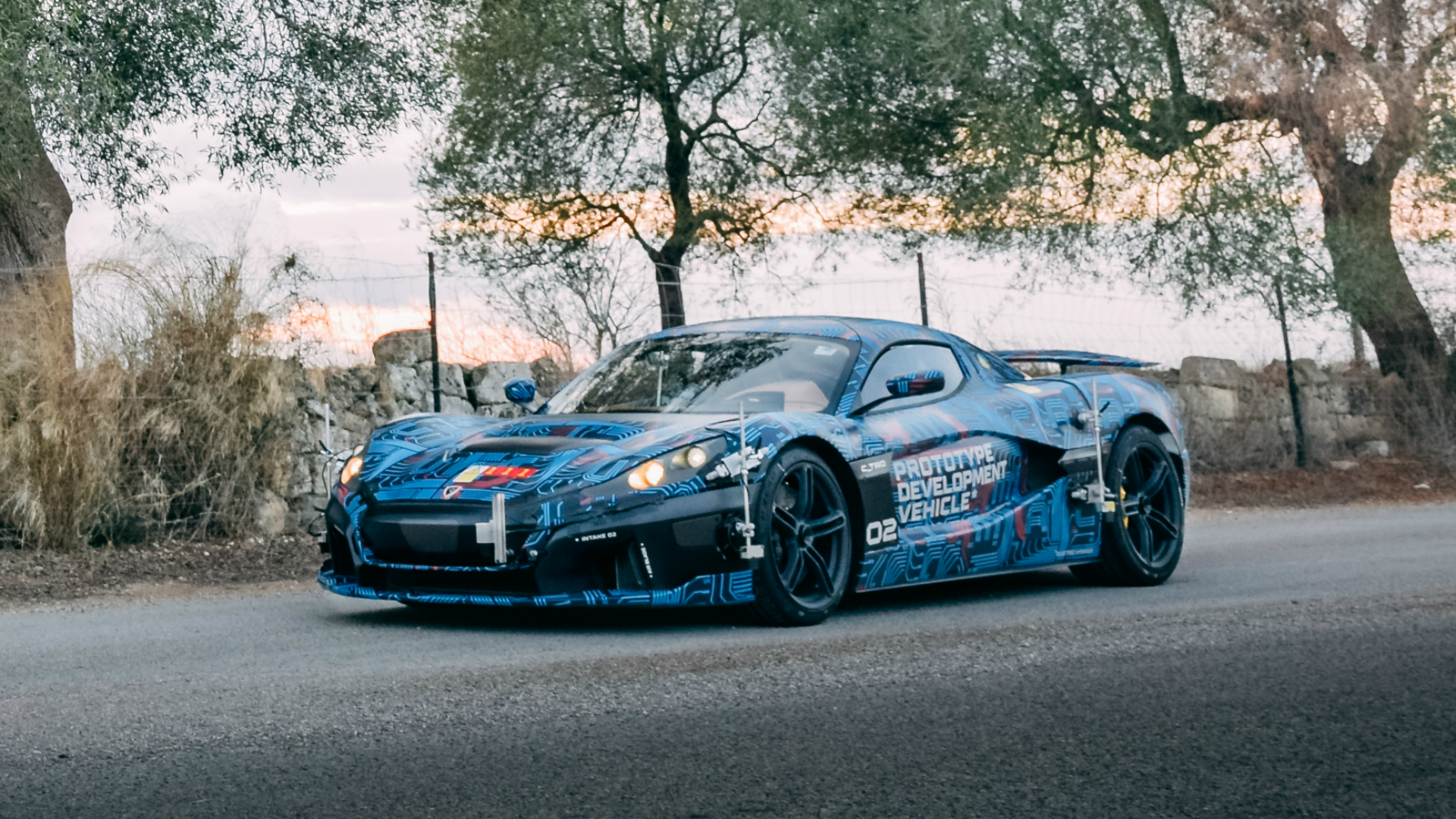 If Top Trumps launches a ‘Supercars’ set for 2020, the £2 million C_Two will be the killer card. But before we delve into its astonishing stats, a word about the company itself.

Mate founded Rimac Automobili in 2009 at just 21 years old. Three years later, he achieved a Guinness World Record when his home-built electric E30 BMW M3 blitzed a quarter mile in 11.85 seconds. “I combined my two passions: electronics and cars,” he explains. “People laughed at first – I was a total nobody. It’s taken a long time to build up our position in the industry.”

A few more of the Rimac C_Two prototype.

Note the huge ‘emergency stop’ button between the seats.

Some serious hardware beneath the rear window, too. An Invidia ECU is ‘pretty much’ the only electronic component not made in-house. pic.twitter.com/1DIkJZnFnB

I’d beg to differ. In 10 years, Mate has gone from his garage to a company employing 600 people. Both Porsche and Hyundai have sizeable stakes in Rimac, and most of the firm’s work involves high-end electrification tech. The forthcoming Hyundai N-branded electric sports car, for example, will lean heavily on Rimac components.

The C_Two is really a shop window for what Rimac does. Even at around £2 million each – and sharing much of its technology with the equally exotic Pininfarina Battista – it seems unlikely that the 150-car production run will make much profit. “We’re approaching this like an OEM [a mainstream car brand], says Rimac PR, Marta Longin, “with 20 prototypes and full crash-testing. That doesn’t come cheap.” 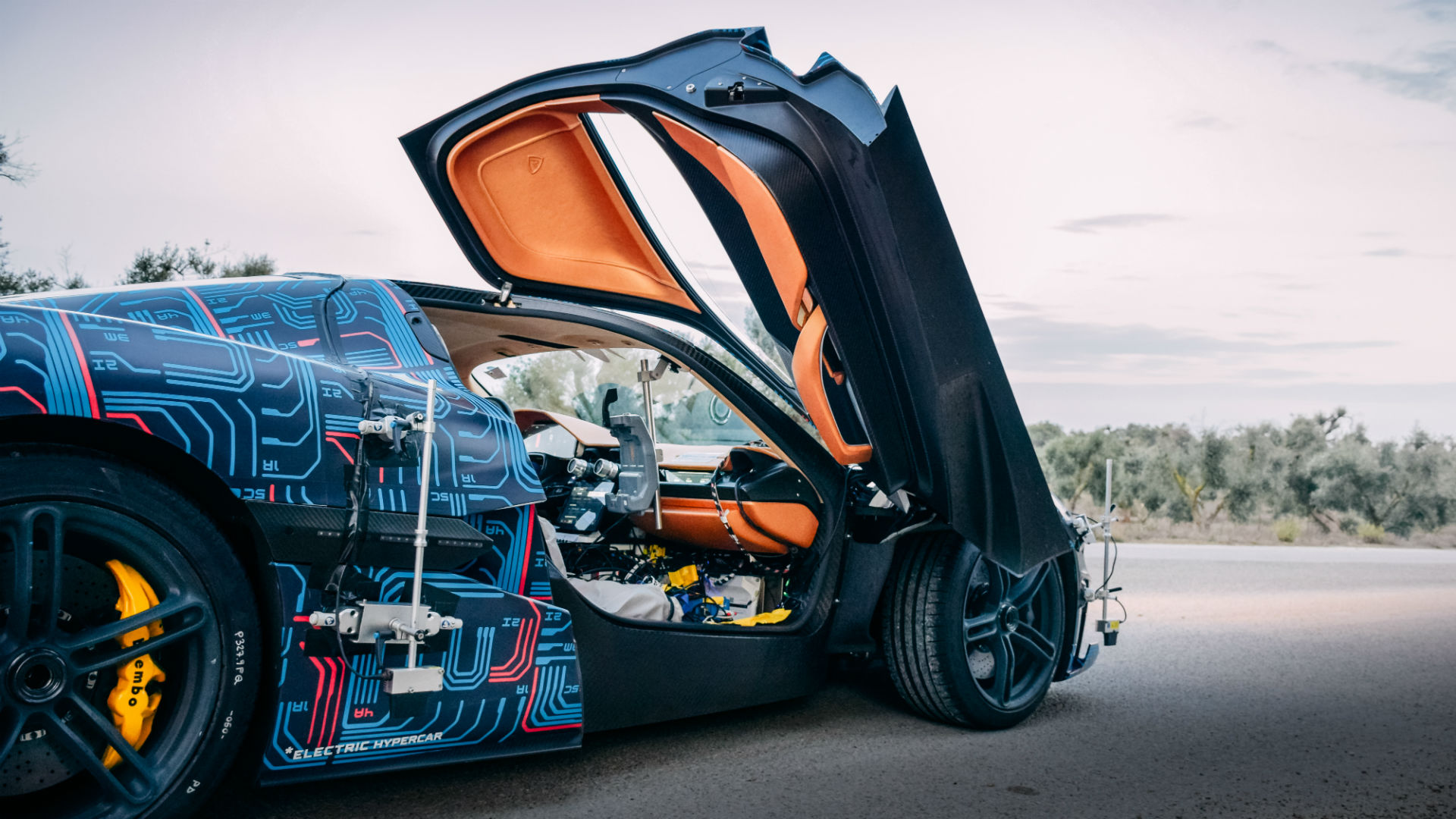 Apparently, the C-Two can manage two laps of the Nurburgring (about 28 miles) at maximum-attack before performance starts to tail off. But drive it like a G-Wiz and you’ll manage a WLTP-certified 342 miles. Charging to 80 percent capacity takes as little as 30 minutes.

“When the McLaren F1 came out in 1992, people thought nobody will ever go faster,” smiles Mate. “Now a BMW M5 has that kind of power and the C_Two exceeds 1,900hp.” But the control of all that oomph is where Rimac really gets clever. 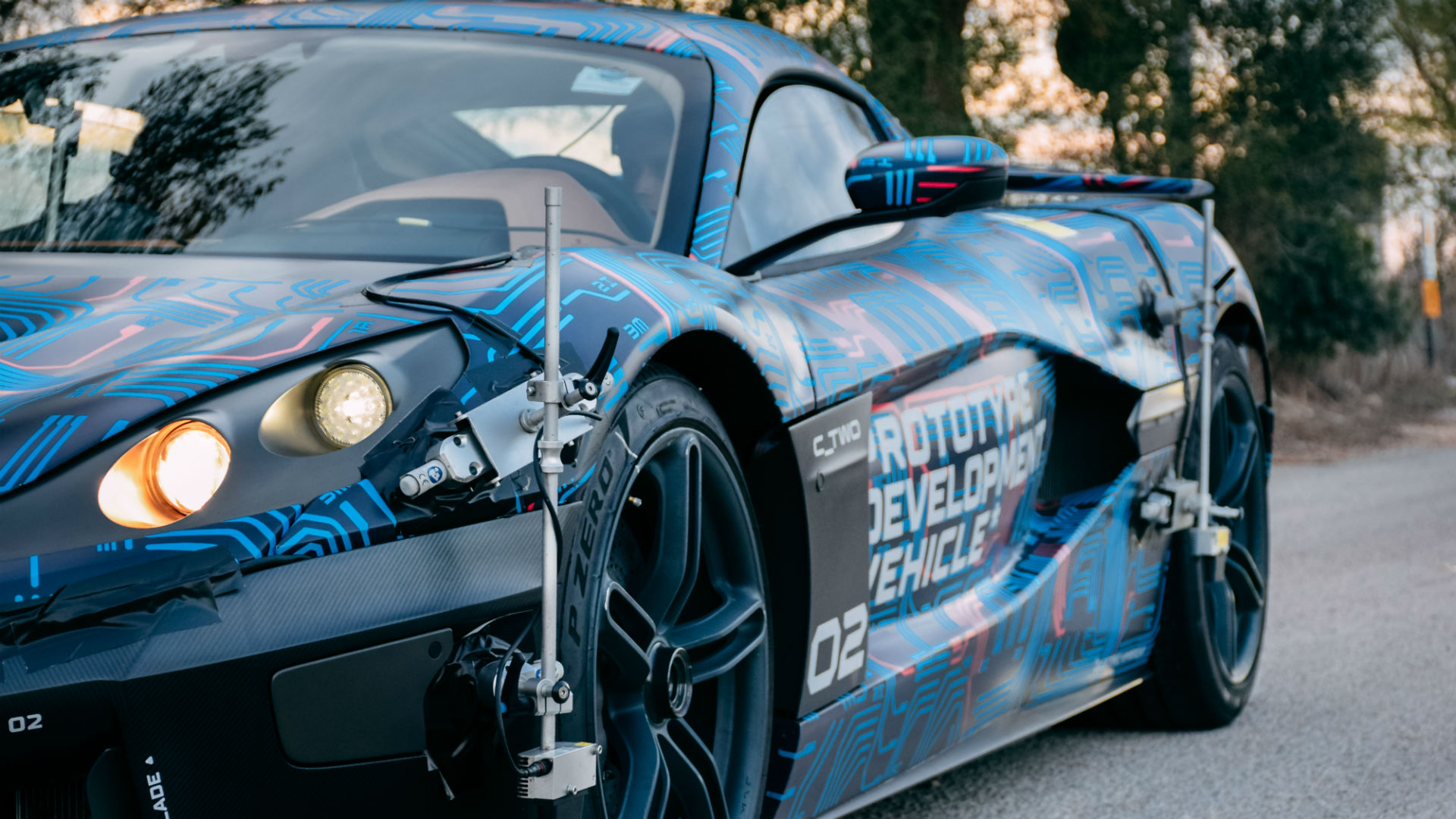 With one electric motor for each wheel, the Rimac has infinitely variable torque vectoring. This, says the Rimac website, allows for ‘minute calibration of intent and behaviour, from a rear-biased driftable sports car to a vehicle that meters traction perfectly on slippery surfaces’. As Mate rightly points out: “You may have the funds to buy this car, but that doesn’t mean you’ve got the skills to get the best from it.”

The C_Two also boasts Level Four autonomy tech, with eight cameras, a lidar, six radar emitters and 12 ultrasonic sensors. So it can literally show you how to drive. Select Driving Coach mode on selected race tracks and it will whisk you round autonomously – sticking resolutely to the racing line with perfect braking and steering inputs. Rimac claims ‘a near-gaming learning experience, with real-world excitement’.

The raw computing power is mind-melting. The car’s 400 sensors and 72 ECUs process six gigabytes of data every hour. “If there’s a cool situation, like you drift around a corner, the cameras can start recording automatically,” explains Mate. “Then you can share the video on social media later.” What, ahem, could possibly go wrong?

Crucially, some of this technology is already trickling down to more affordable cars, as the market shifts towards an electrified, self-driving future. What you see on a Rimac today could be fitted to a Hyundai in 10 years’ time. Maybe sooner. 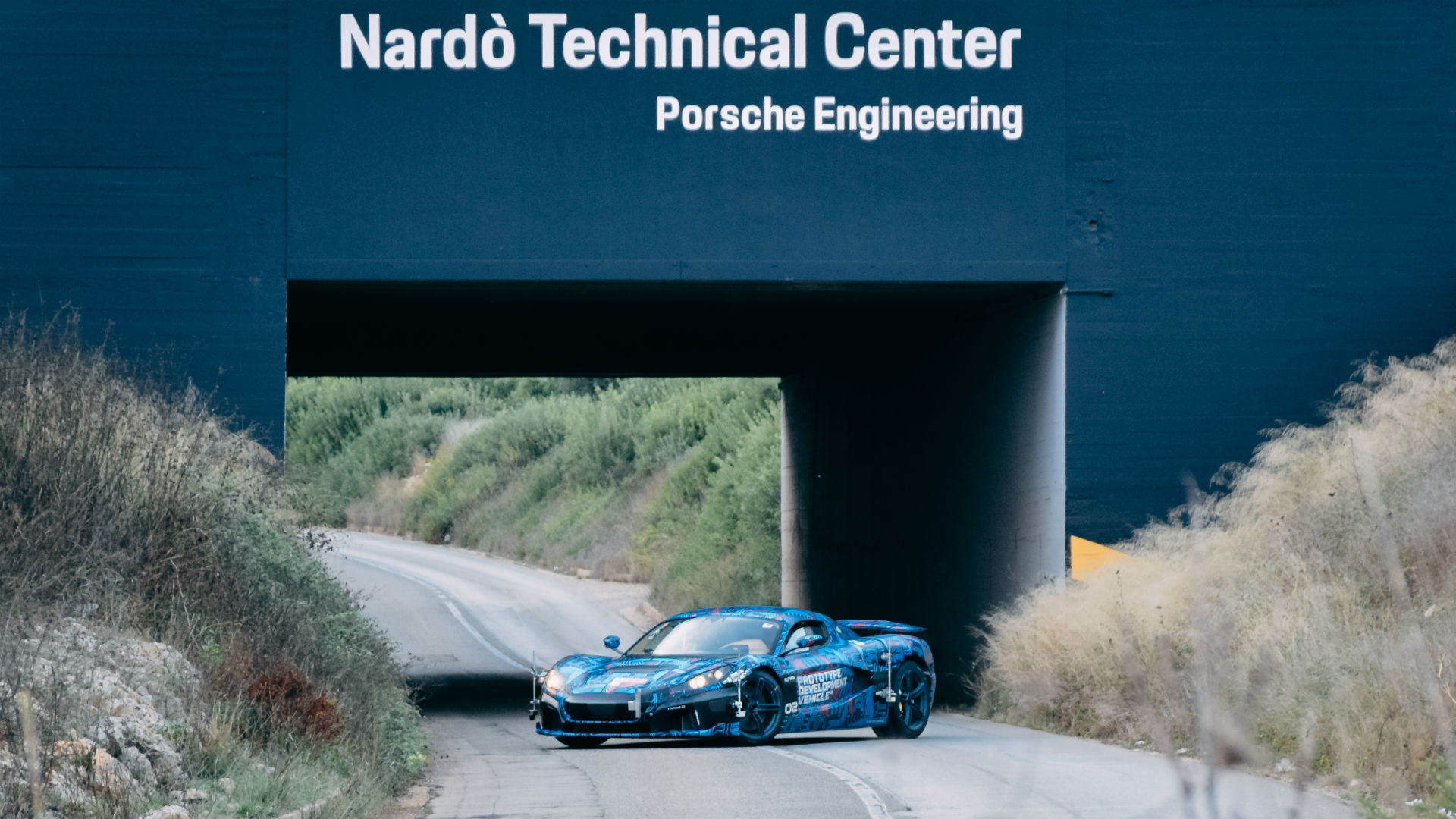 If all that sounds a bit new-fangled, you’re probably not the target customer. Mate admits that the C_Two will appeal, in part, to “tech guys who don’t care about V12s”. Yet there is a new breed of environmentally-conscious hypercar buyer too: “people whose beliefs don’t fit with a combustion car”.

Either way, I doubt Mate will have trouble shifting all 150 examples of the C_Two. There really is nothing quite like it. The ultimate proof will be in the driving, of course (drops heavy hint to Rimac PR team), but as a showcase for what his still-young company can do, it’s already a startling achievement.

The C_Two will be sold exclusively through H.R. Owen in the UK, which has showrooms in London, Manchester, and Hatfield, among other locations. Start saving now.