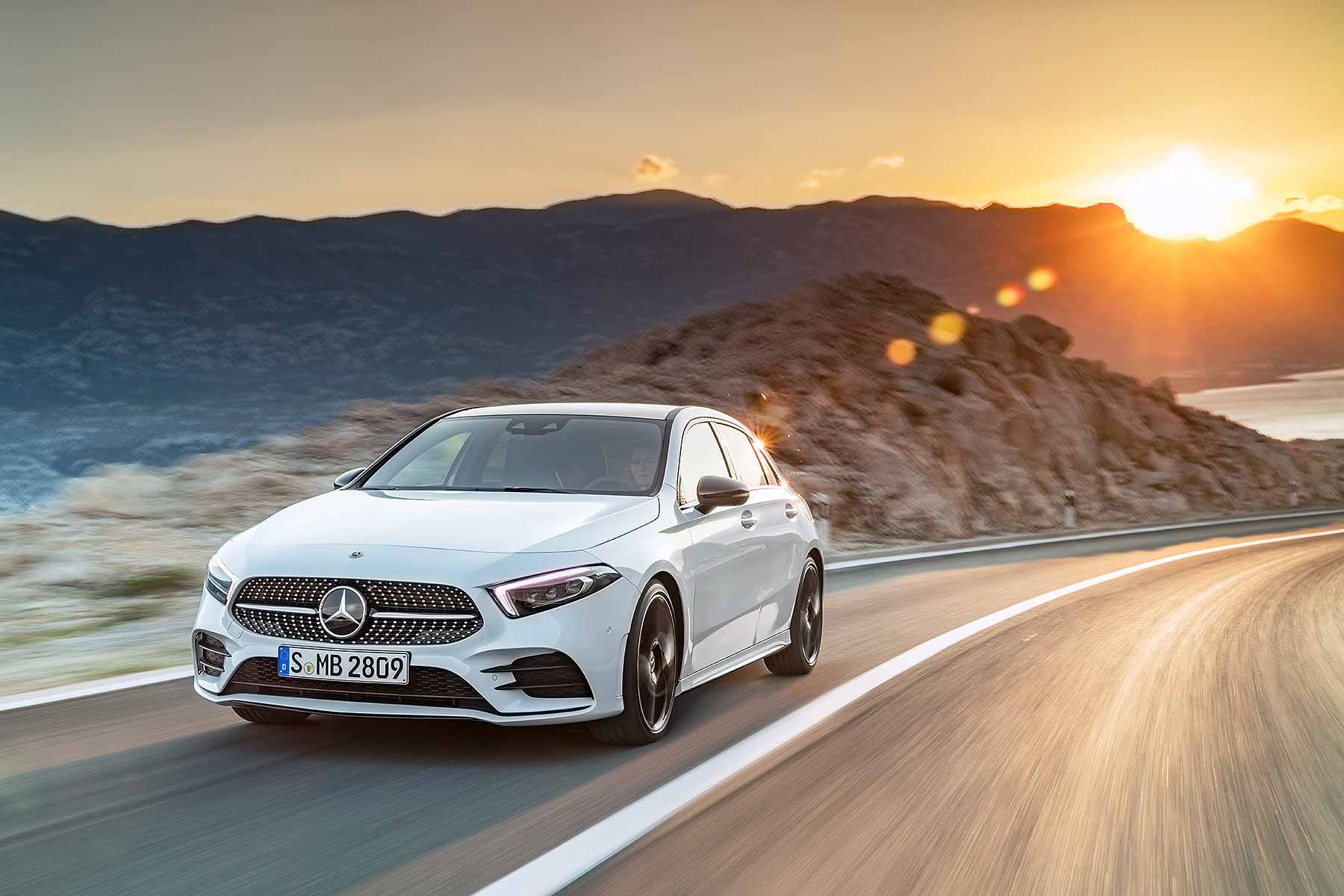 The new fourth-generation Mercedes-Benz A-Class has been revealed. The firm is bullish, saying it redefines modern luxury and revolutionises interior design in the compact class; ordering opens in March and deliveries begin in the spring.

The new A-Class is bigger than before, with a 370-litre boot now just 10 litres shy of a Volkswagen Golf. It’s easier to get in and out of – particularly in the rear – and easier to see out of as well. Naturally, it’s safer than ever, with S-Class-grade safety assist tech available, while comfort options include climate-controlled massaging front seats, 64-colour ambient lighting (including illuminated air vents) and semi-autonomous driving functionality.

Engines are all-new. The 1.4-litre (actually, 1,332cc…) M282 motor sounds the star of the show: it has cylinder deactivation, produces up to 167hp when they’re all activated, and should return diesel-like economy. The M260 2.0-litre puts out a handy-sounding 224hp and the OM608 1.5-litre turbodiesel produces a meagre-sounding 116hp but is bound to deliver good economy, low CO2 and, thanks to standard AdBlue NOx-reducing tech, ultra-low exhaust nasties. It will be a star of the new WLTP fuel economy rules.

What else is standout about the new A-Class, though? Here are 11 things you need to know.

1. The new Mercedes-Benz A-Class is the first Merc not to have a cowl atop the dash. Instead, the dash ‘wing’ stretches from side-to-side, with the freestanding screens sitting proud on top.

2. Even the basic A-Class has twin 7-inch colour displays. The next one up has a 7-inch and a 10.25-inch display; the range-topper has dual 10.25-inch displays (that’s 26cm), housed under a single piece of glass. The central display is touchscreen, for the first time – you can pinch-zoom maps, like you do on a tablet device or smartphone.

3. The choice of ambient lighting colours has increased fourfold, from 12 to 64. To help you find the perfect hue, Mercedes-Benz has preassigned 10 colour ‘worlds’, delivering “an avant-garde lighting display with spectacular colour changes”.

4. The new MBUX (Mercedes-Benz User Experience) multimedia system has artificial intelligence (AI). If you always listen to PM on Radio 4, it will learn this, and suggest it to you at around 16.50 each weekday. It will learn who you regularly call and when, and pre-empt this for you. If you regularly drive a route, it will pop this up as a suggestion on the home screen: all you need to do is accept. It’s going to be quite uncanny.

5. It has voice control. Shout, “hey, Mercedes!” and you can fire instructions to your A-Class like you do your Amazon Alexa device.

6. It has a Cd drag factor of just 0.25. This is very aerodynamically slippery indeed – the best in its sector, in fact.

7. Even the smallest alloy wheel is 16-inches. The largest goes up to 19 inches. Will the future Mercedes-AMG A-Class nudge into the 20″s? 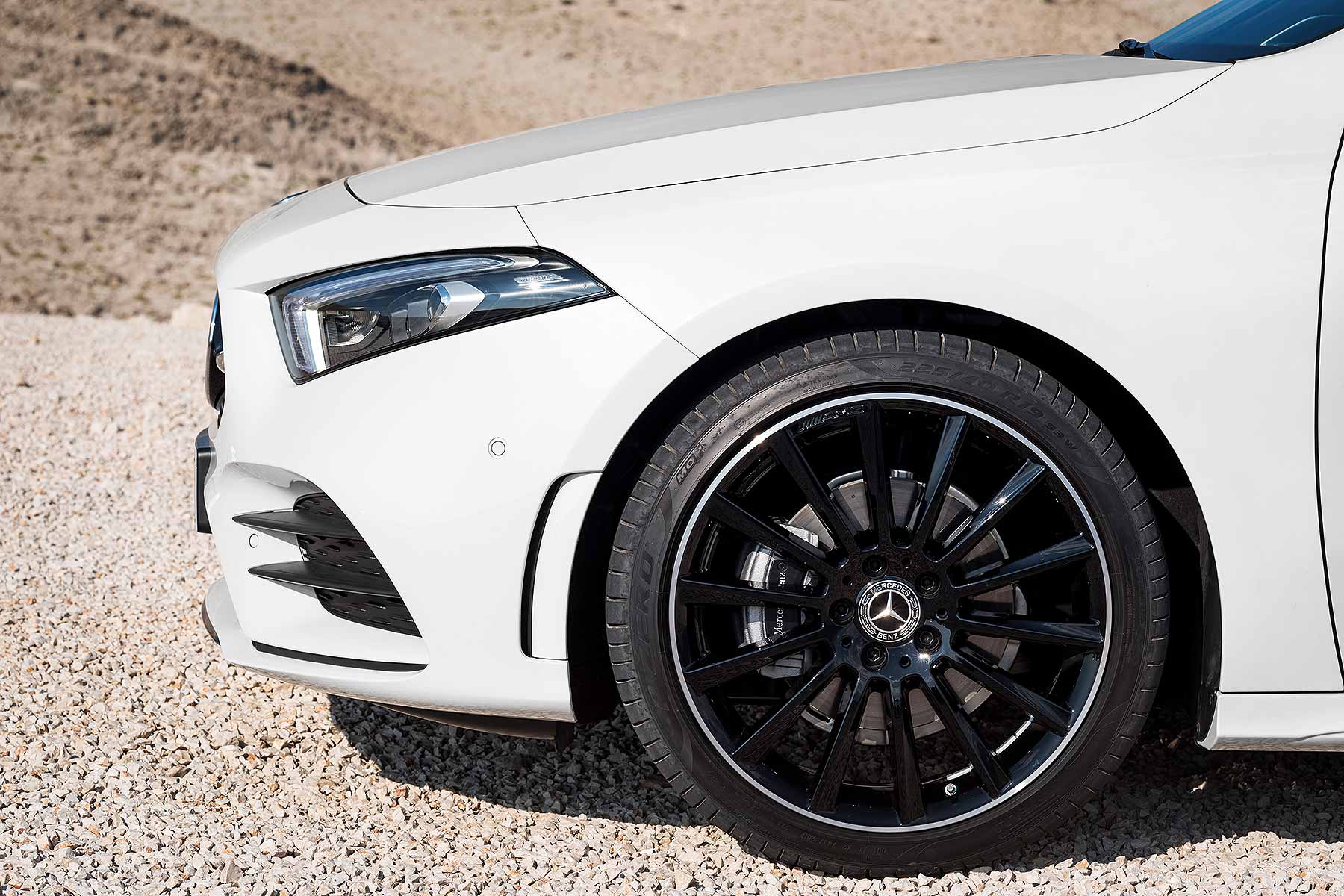 9. Mercedes-Benz has built a new Technology Centre for Vehicle Safety (TFS). The new A-Class is the first Merc to be developed there. Findings from real-life accidents have gone into it, helping optimise “every single bodyshell component… according to the loads and stresses encountered”.

10. Entry-level A 180 d and A 200, surprisingly, have basic (and cheaper) torsion beam rear suspension. Only A 250 and all 4MATIC models have a more advanced four-link independent rear suspension. You can get three types of dampers though: comfort, ‘sports comfort) lowered by 15mm, and active damping.

11. Mercedes-Benz has spent four years developing the new A-Class. It’s covered 12 million test kilometres, with “a few hundred” test cars covering miles in 10 countries (the UK was, sadly, not one of them).

Mercedes-Benz surprisingly mentions the “Elk test” in its launch information for the new A-Class. The car “soon attracted criticism” following its 1997 launch, it says: “because an A-Class overturned… and Mercedes-Benz responded: the A-Class was given a revised suspension system and ESP as standard”. The firm, it says, duly raised the safety of compact cars and “put its stamp on the whole industry. It started the success story that is the A-Class.”