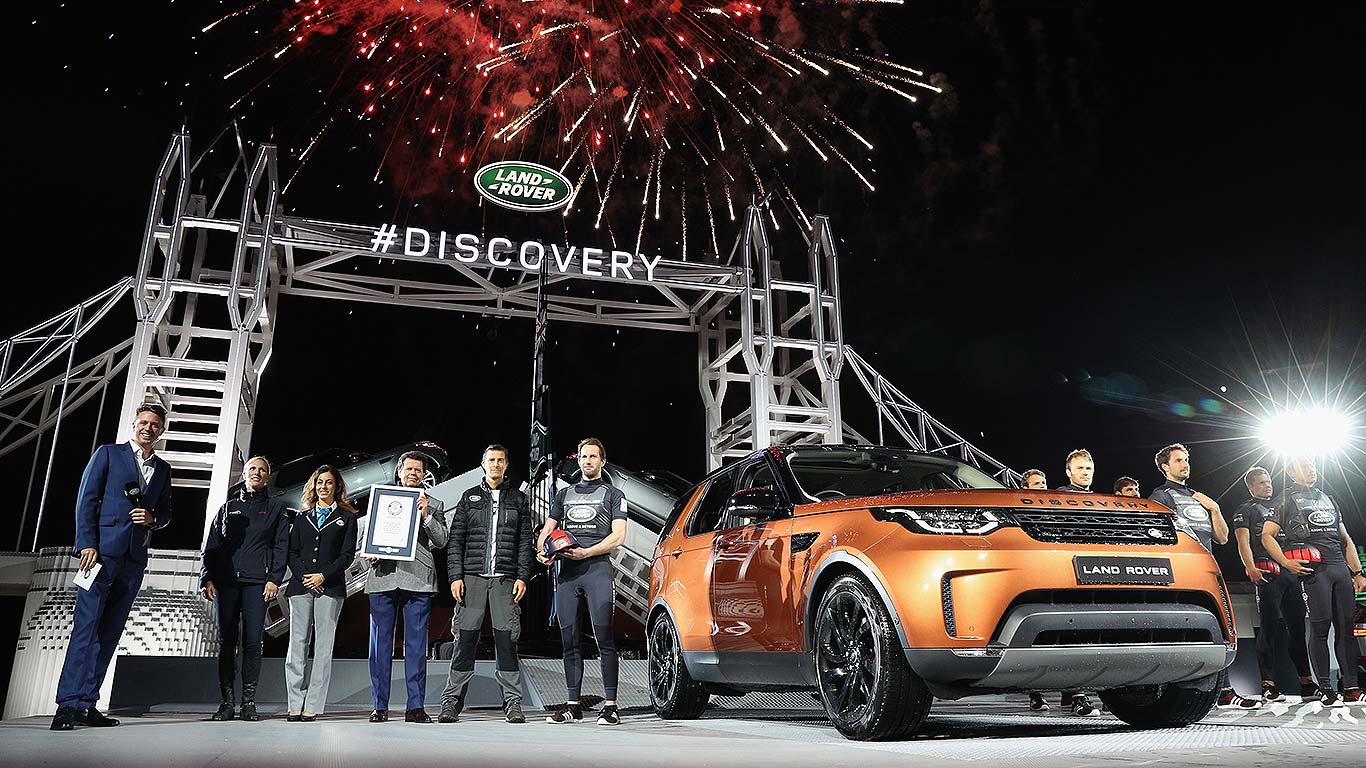 Land Rover has revealed the all-new Discovery ahead of sales beginning in spring 2017 – and it is already claiming it is “the best family SUV in the world”.

Launched in a spectacular event attended by Bear Grylls, Sir Ben Ainslie and Zara Phillips MBE, the now-all-aluminium Discovery is a full-size seven-seat SUV that Land Rover insists has “unbeatable capability and versatility”. 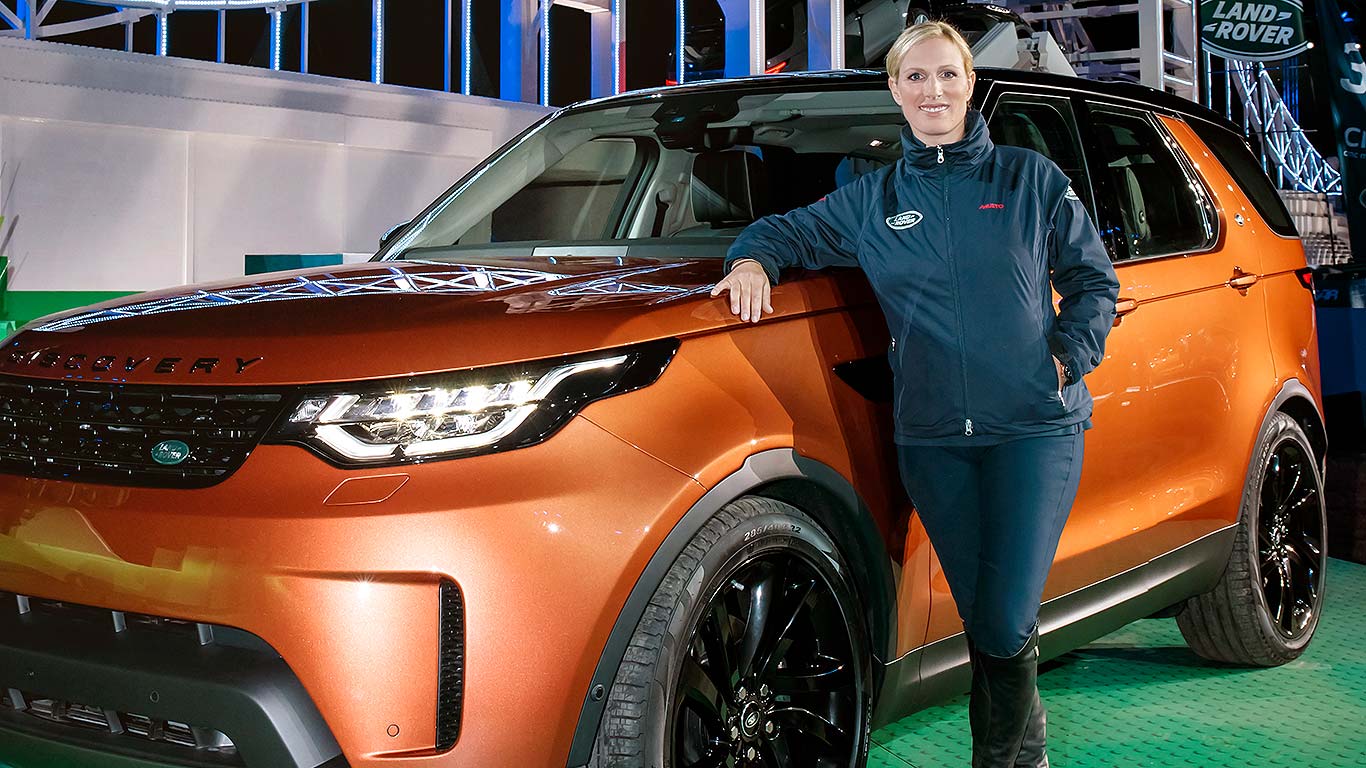 The Discovery launch event was genuinely jaw-dropping. The centrepiece was, no less, a 13-metre-high Guinness World Record-breaking Lego structure of London’s Tower Bridge. Built from more than 5.8 million Lego bricks, the Discovery appeared alongside it – in the process, setting a new world record on the night for using the most Lego bricks in one construction (beating the previous record by almost half a million bricks!).

It also involved Bear Grylls abseiling off the bridge onto stage next to the Discovery, Sir Ben Ainslie driving his sailing team in a Discovery through almost a metre of water beneath the bridge – and Zara Phillips even starred in a special equestrian zone. And once we’d caught our breath, we took a look at the new Discovery itself.

‘The most complete all-round SUV package on sale’ 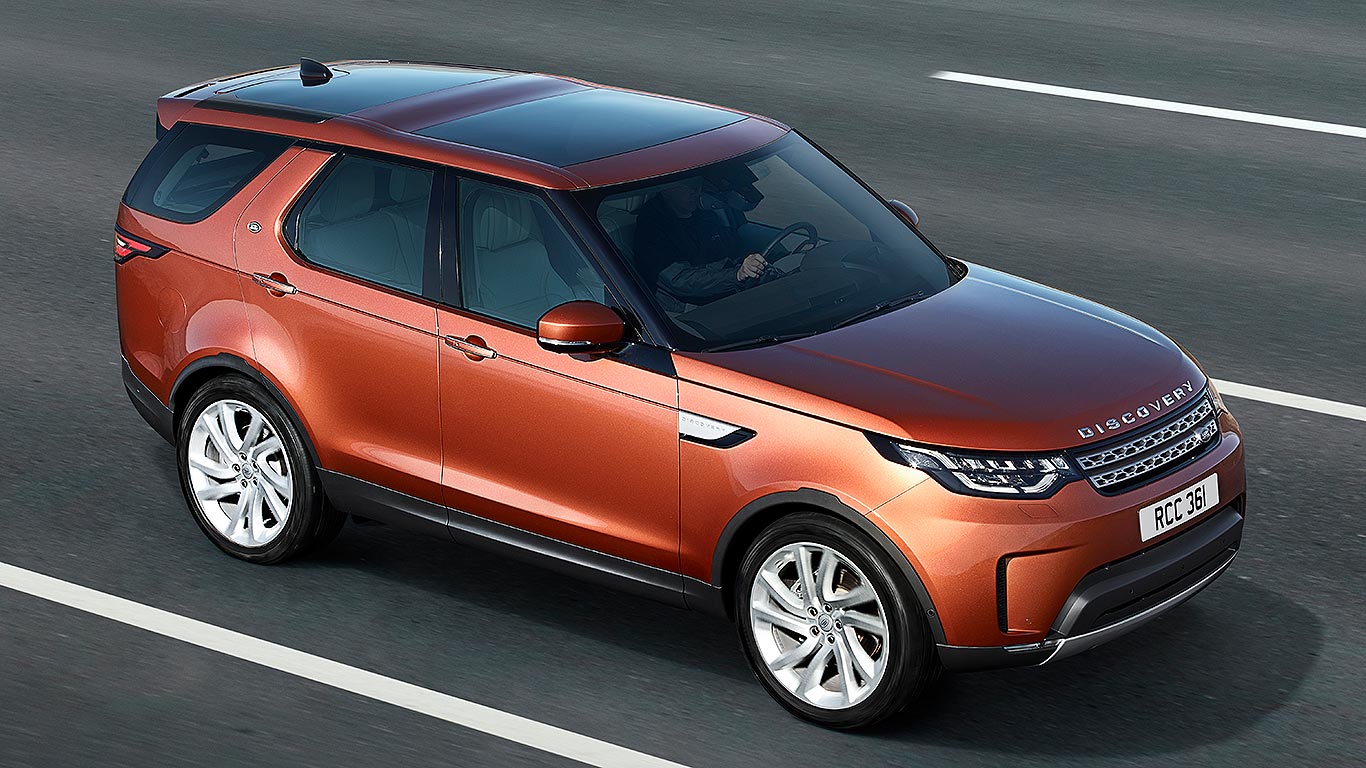 Land Rover launched the Discovery back in 1989 but, although there have been four generations since then, there technically have only been two basic models: that’s not a lot for 27 years on sale. The new Discovery makes it three new models – and this is easily the most advanced yet. Indeed, it’s now more Range Rover than Land Rover. 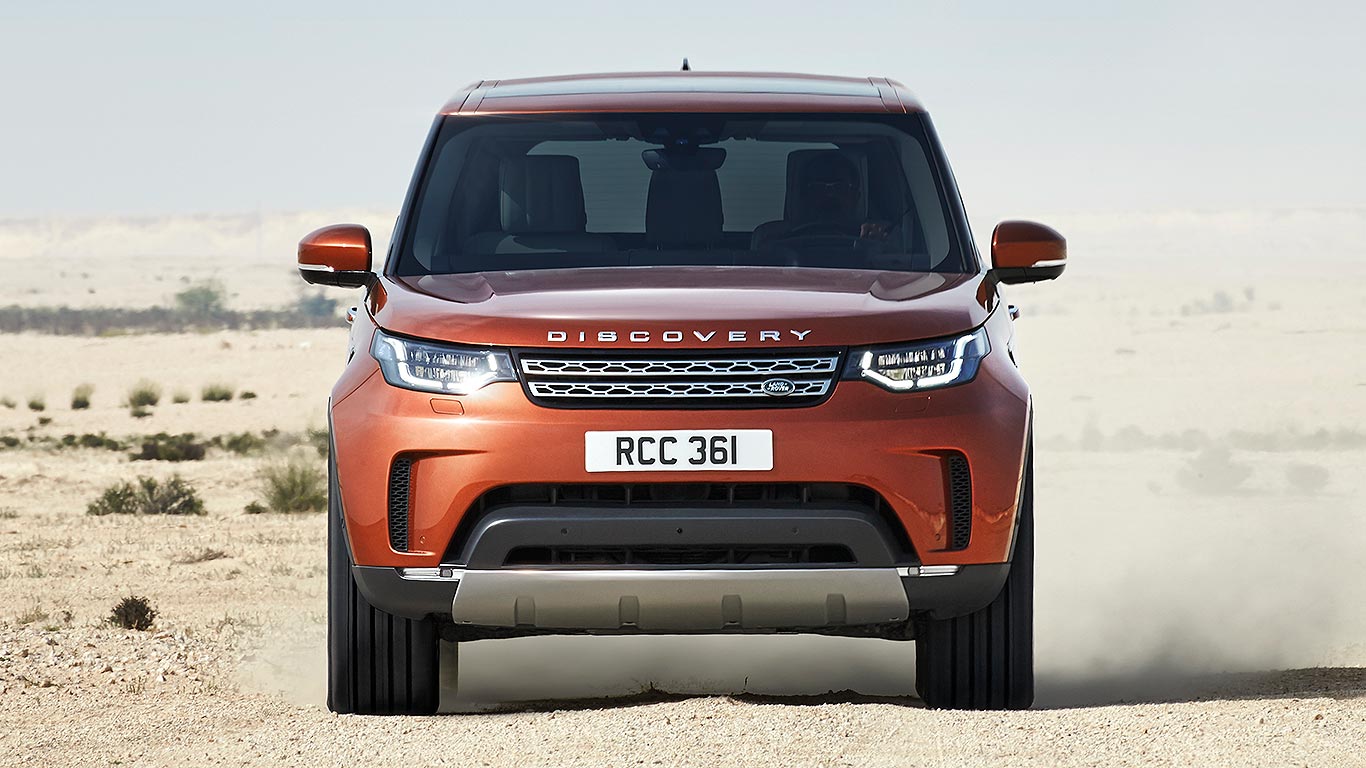 Doesn’t look much like a traditional Discovery, does it? More like a Discovery Sport, or the Discovery Vision Concept car that previewed Land Rover’s new look – or even, a Range Rover Sport sibling? This is easily the most sophisticated Discovery ever, a quantum leap over its Lego-block predecessor. The question is, of course, how will Land Rover traditionalists take to it? 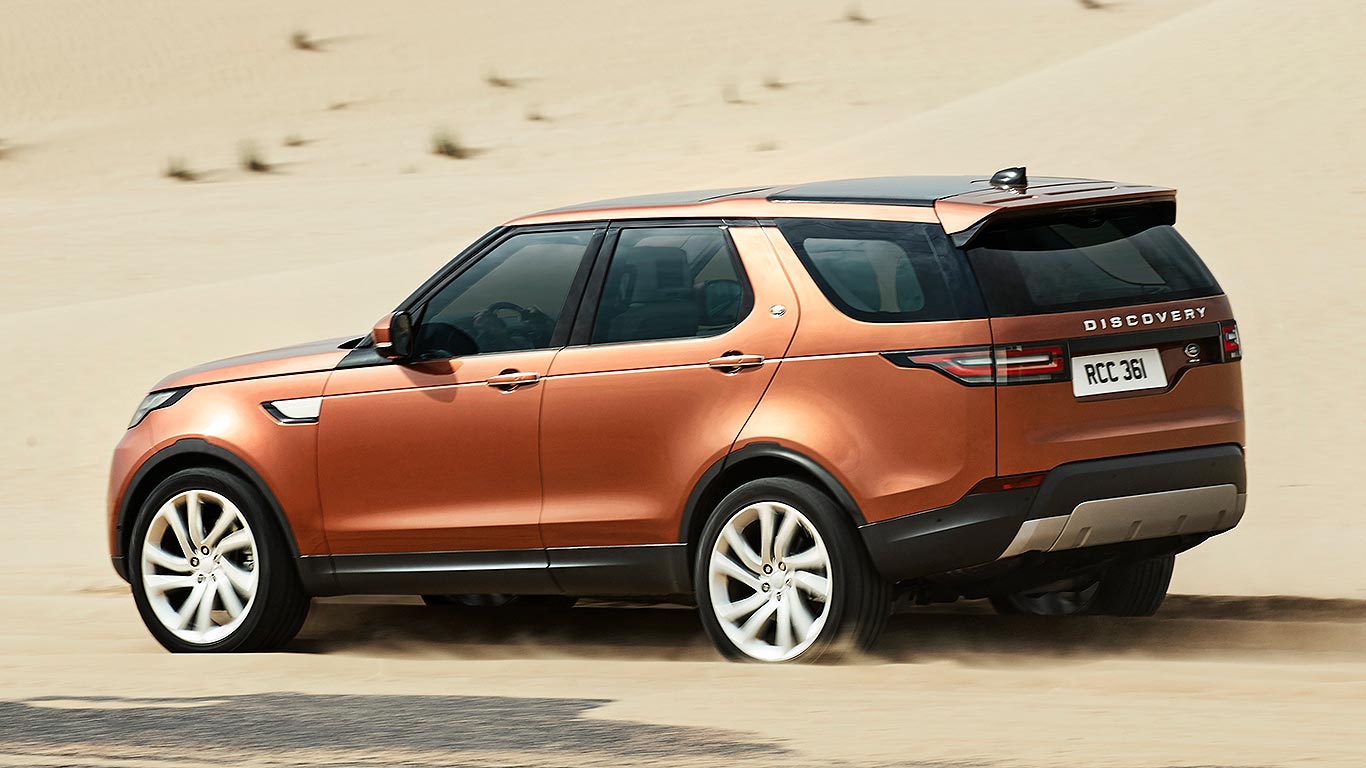 Design chief Gerry McGovern admits the Discovery has been revolutionised and “the result is a radical departure in design,” but he feels the new look will “introduce the Discovery family to a new, wider customer base”. That’s buyers of the Audi Q7 and Volvo XC90: this is why the Discovery has become so much more premium-looking. Besides, if they hadn’t waited so long to replace the old one, it probably would have looked more like this anyway… 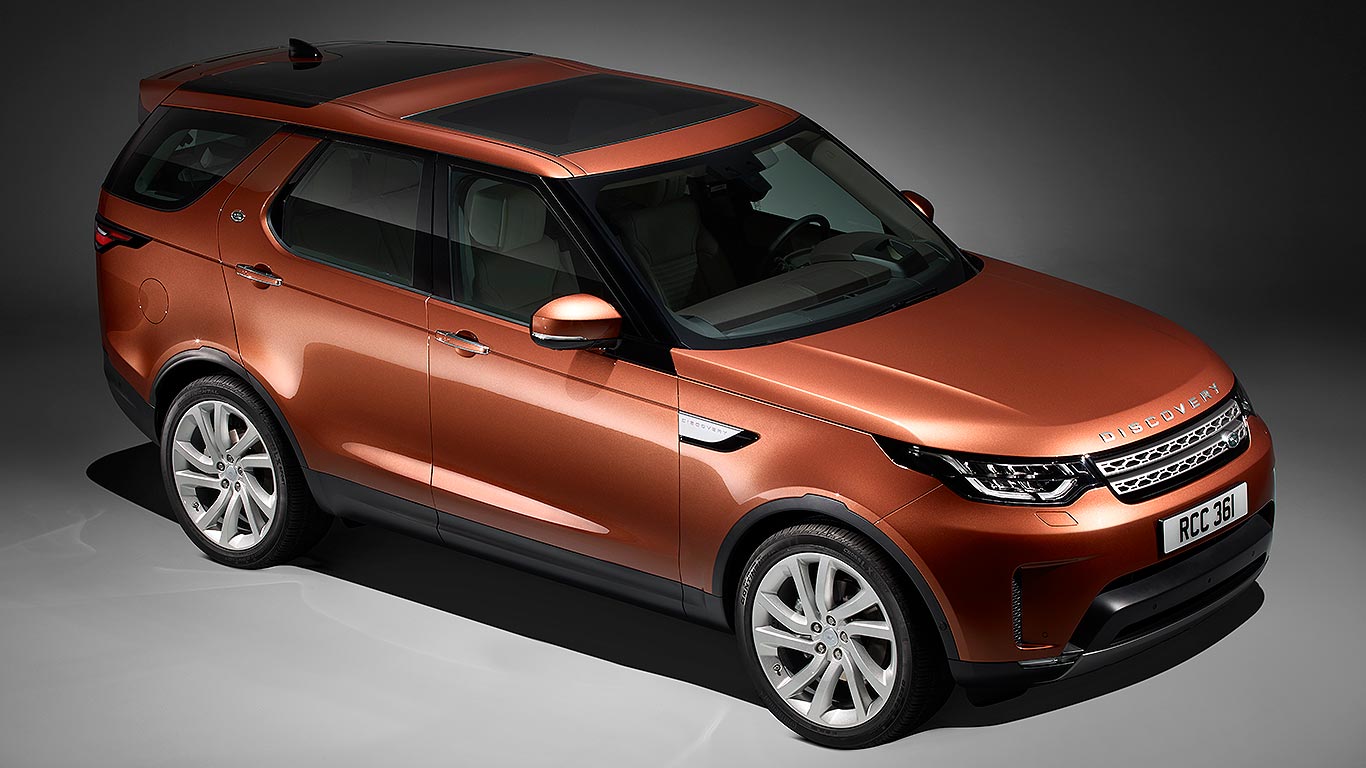 Key to the look of the new Discovery is its sheer volume and proportions, reckons McGovern. The surfaces are much more sophisticated and the detailing far more precise than the slightly hit-and-miss Discovery 4. Basically, it’s more premium in appearance, significantly so, which McGovern insists “will resonate with today’s customers”. 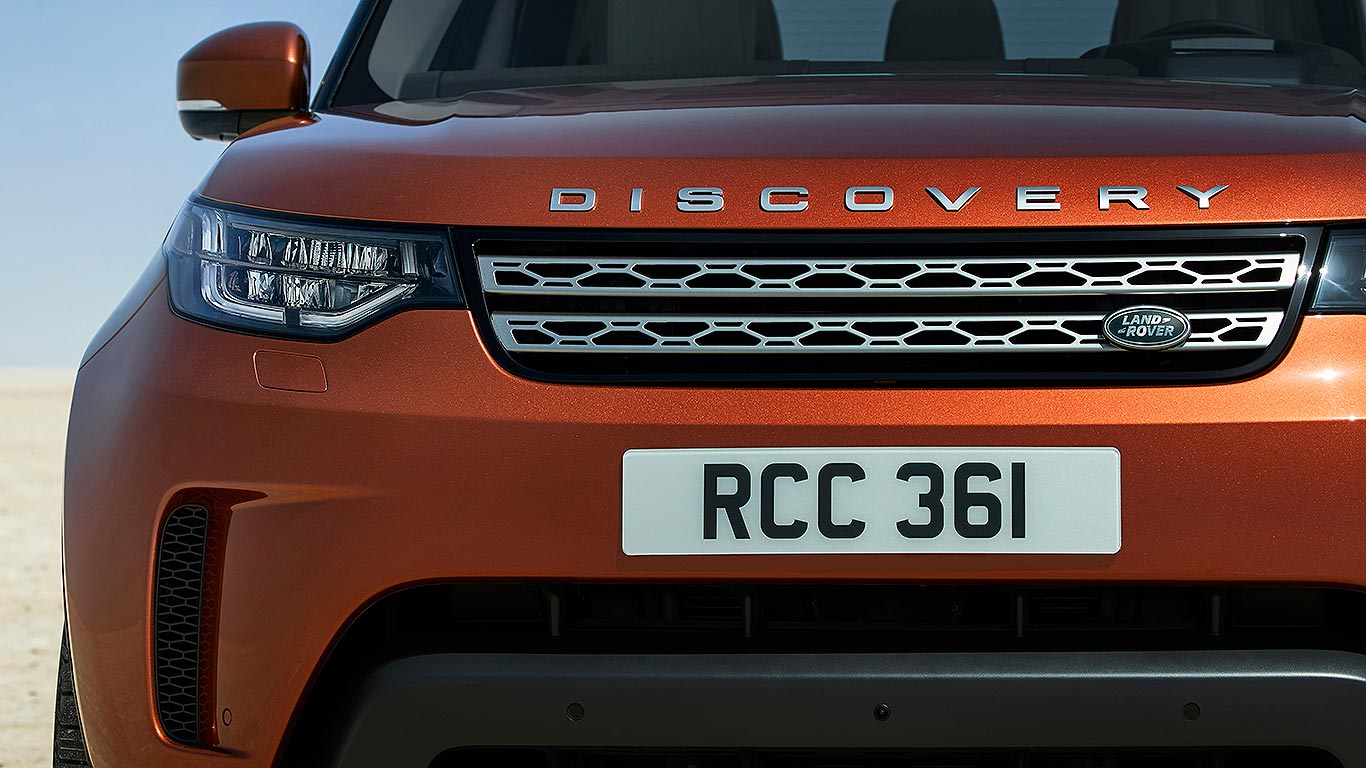 Discoverys have always had square headlights and blunt, brick-like front ends. No longer. They now have sculpted lights, an ultra-smooth frontage and minimal fuss, fripperies or air intakes. It’s a huge step on here, reflecting the Discovery’s newfound lightness – almost half a tonne lighter than the old one. 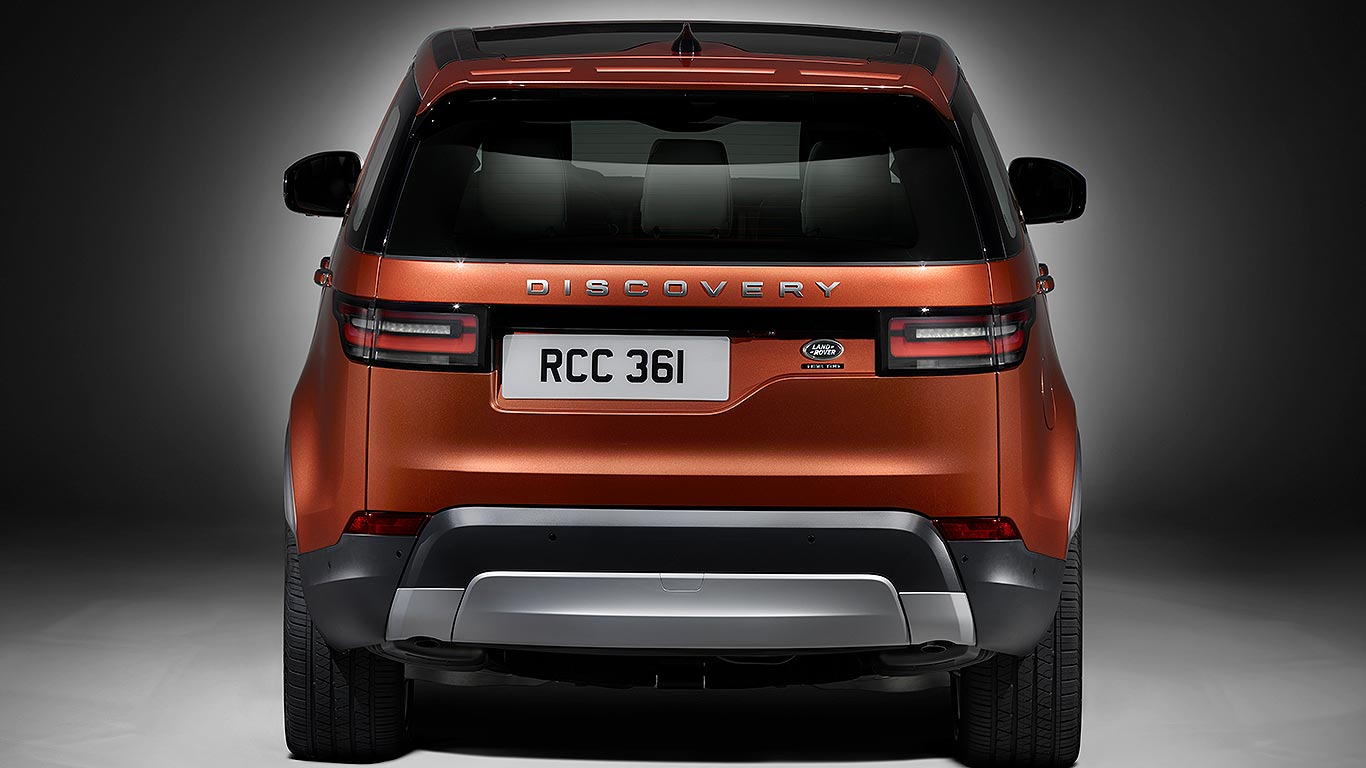 The rear is distinctive. The number plate is offset and the design asymmetric, mimicking the side-hinged tailgate of the original (even though this is a conventional liftback). Those new horizontal tail lamps look almost like a concept car, and the ‘DISCOVERY’ text is again writ large. The one-piece design gives a bigger opening, says Land Rover, and the powered hatch is gesture activated. Just ‘kick’ beneath the rear bumper to open it.

Has the new Discovery retained its trademark features? 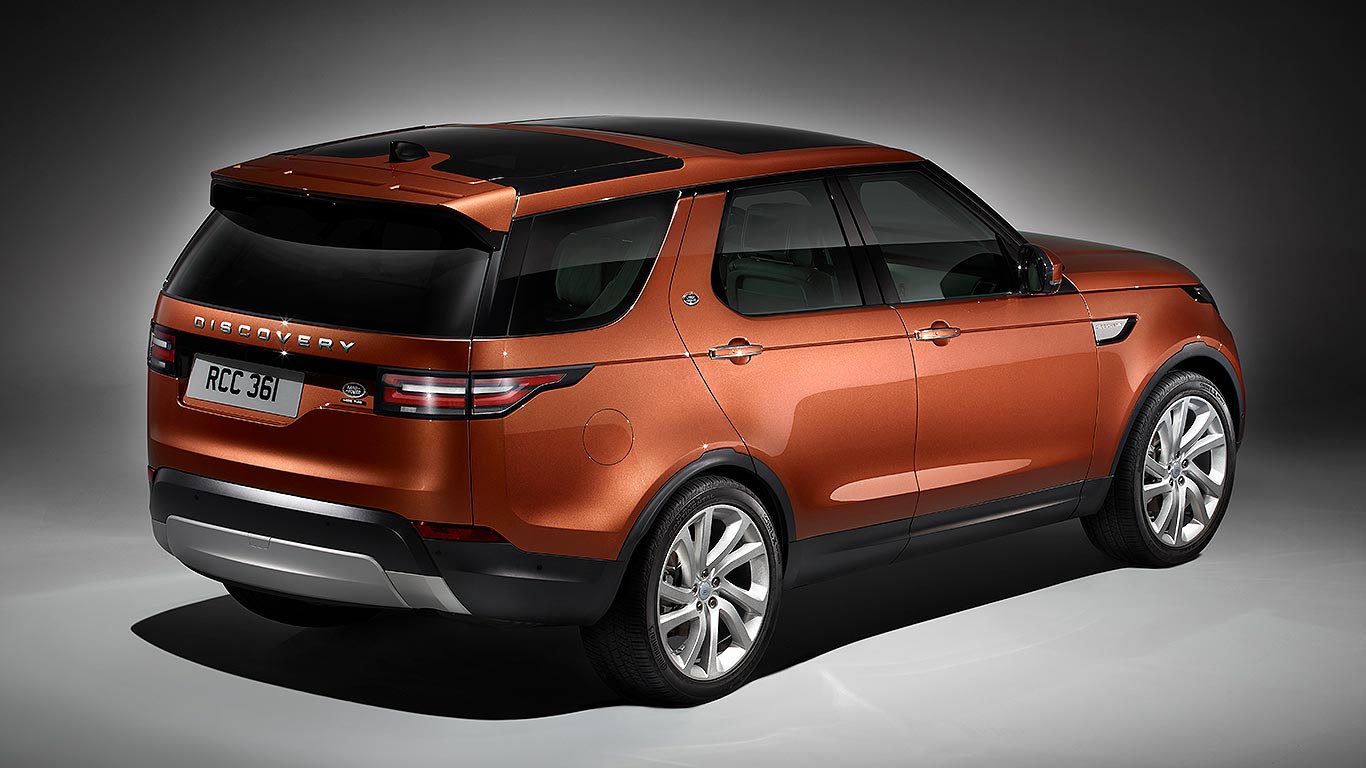 Every Discovery up to now has had a stepped roofline and the new 2017 Discovery isn’t about to change that. It means the stadium seating has been retained inside, too; each row is higher than the one in front of it, so everyone gets a good view out. Some timeless Discovery cues, such as the shape of the C-pillar, are retained, but others are eschewed. The tail lamps are horizontal, for example, rather than vertical – and the split tailgate is also no more (instead, a powered fold-out ledge in the boot floor provides the well-loved ‘picnic seat’, sheltered by the hatchback tailgate). 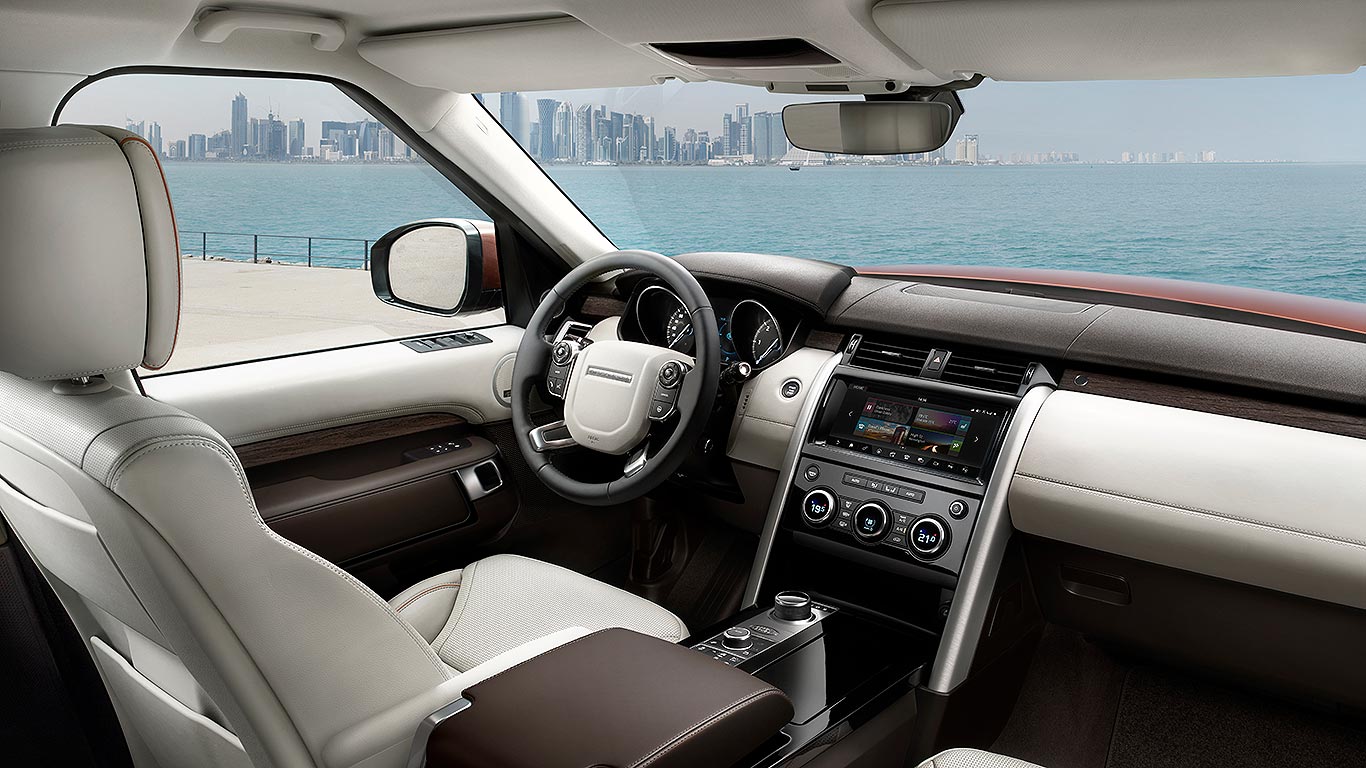 The new Discovery is equally headline-grabbing within. It was imperative to be as spacious and as practical as could be, insisted McGovern: Range Rovers are all about luxury, but this car should be about “complete interior flexibility”. Not that it isn’t luxurious, mind: to existing Disco owners, it may feel not unlike a posh Rangie in there… 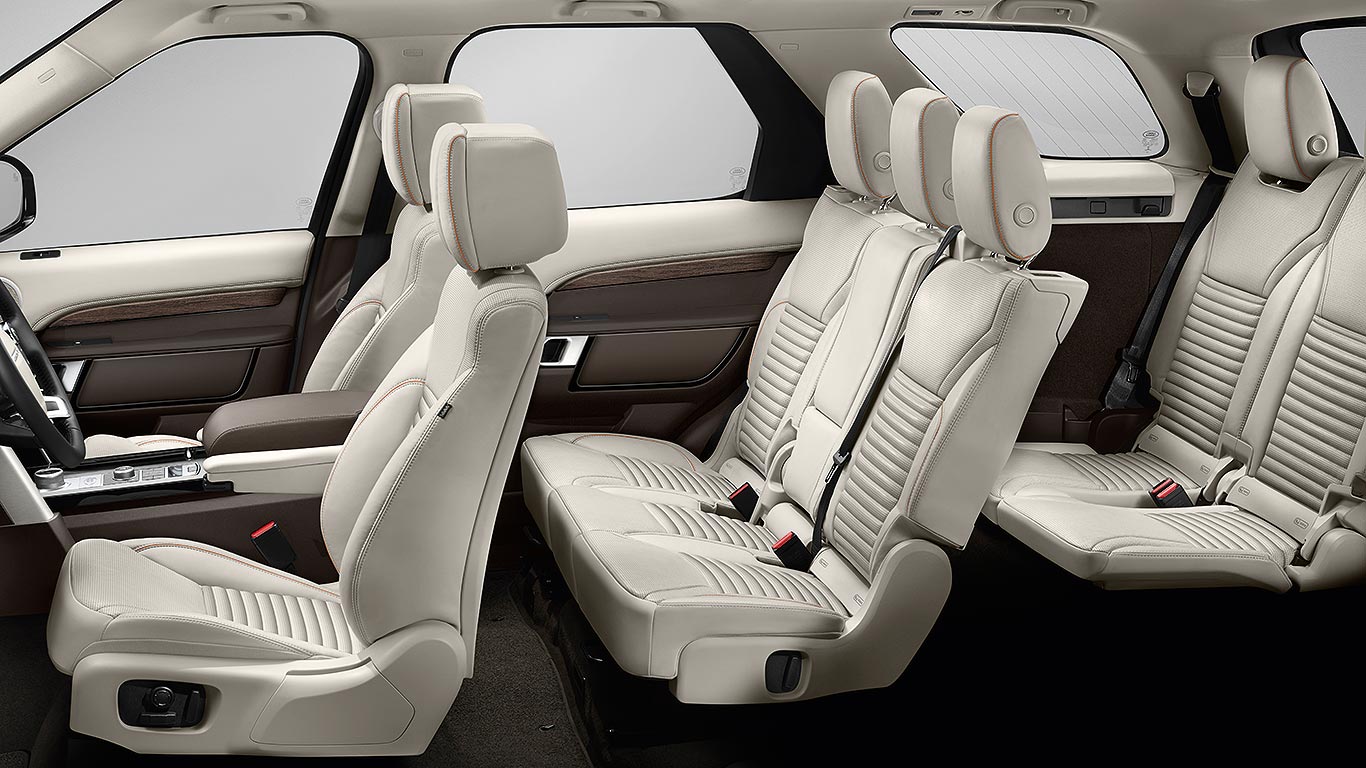 The big Discovery is just under five metres long and has enough space for adults in all three rows (95th percentile adults really can comfortably sit in the rear: we know – we tried it to confirm this). All those seats can even be reconfigured remotely via an app, as so aptly demonstrated recently by Bear Grylls jumping out of a plane (in fairness, you’ll more likely use this in the queue at IKEA). All three rows can be heated, and the first two can be cooled as well. The lucky duo up front can even have massage seats. 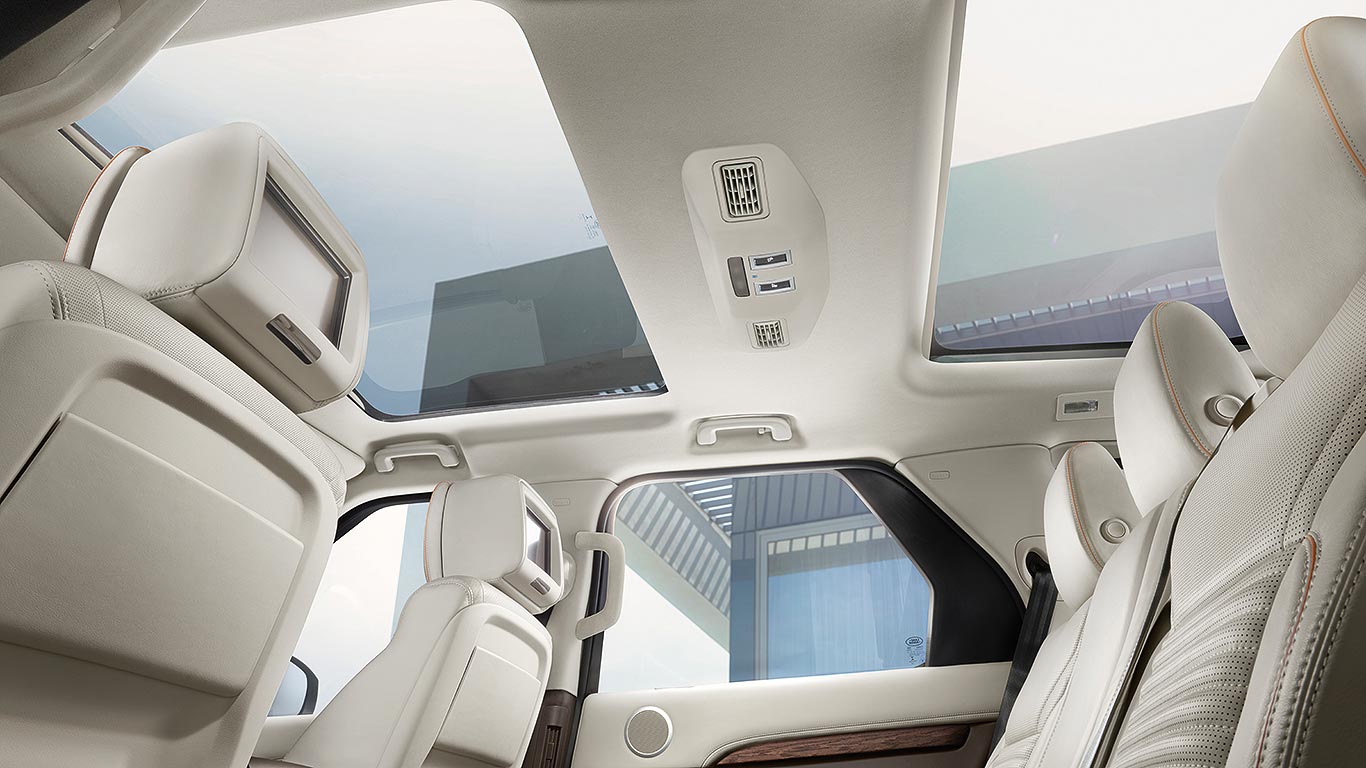 A massive panoramic roof is standard on SE models and above – that’s one up from base S, meaning most Discoverys will have the same light, airy feel that’s always been a feature of the model. It’s a tall machine, but standard air suspension on all can be dropped by 40mm to make it easier to get in and out. Up to four 12v sockets and nine USB sockets should keep multi-device families happy, and most models also have wi-fi. 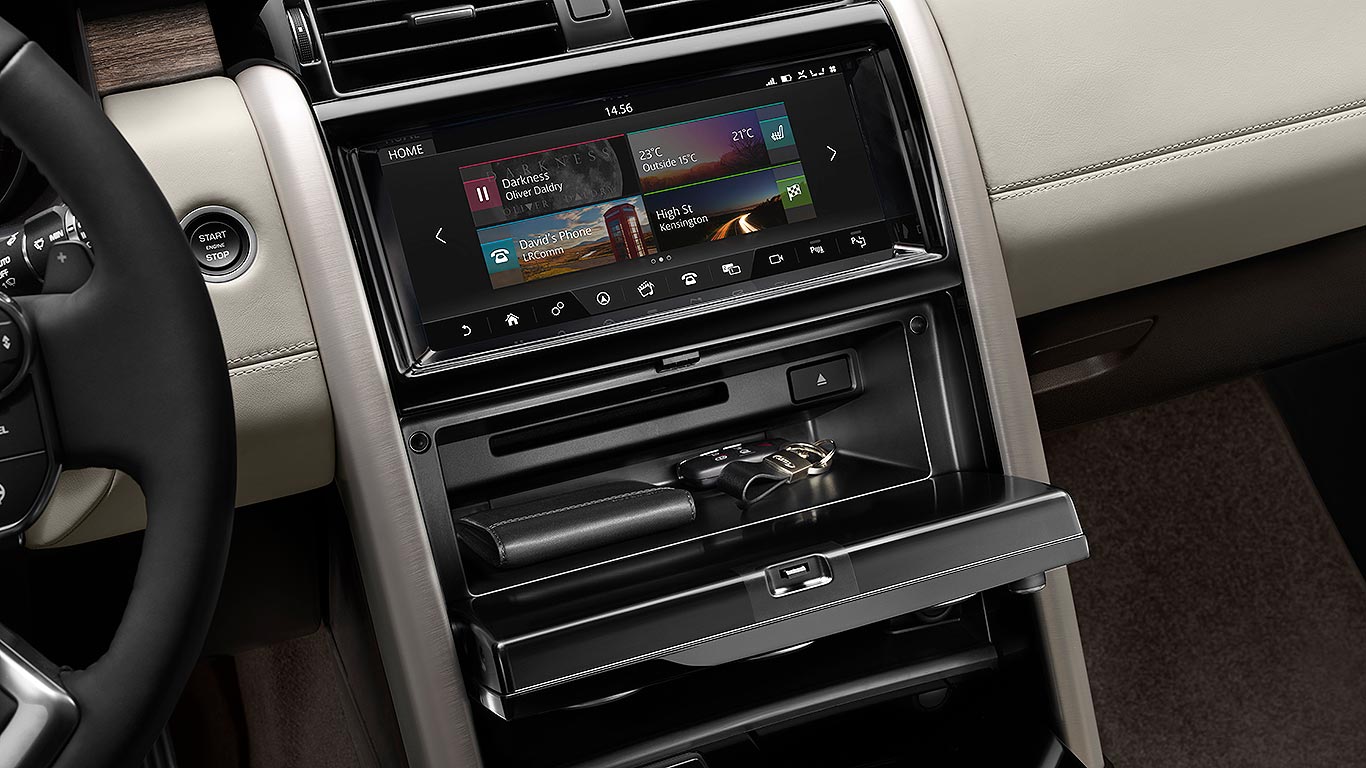 The current Discovery’s horribly dated sat nav is fixed here with new, fully-connected InControl Touch Pro infotainment system, complete with 10-inch touchscreen. It’s so feature-packed, the button count on the centre console is down by a third, making it appear more modern. The screen even folds down, revealing yet another stowage box behind. Because, yes, there are a lot of them… 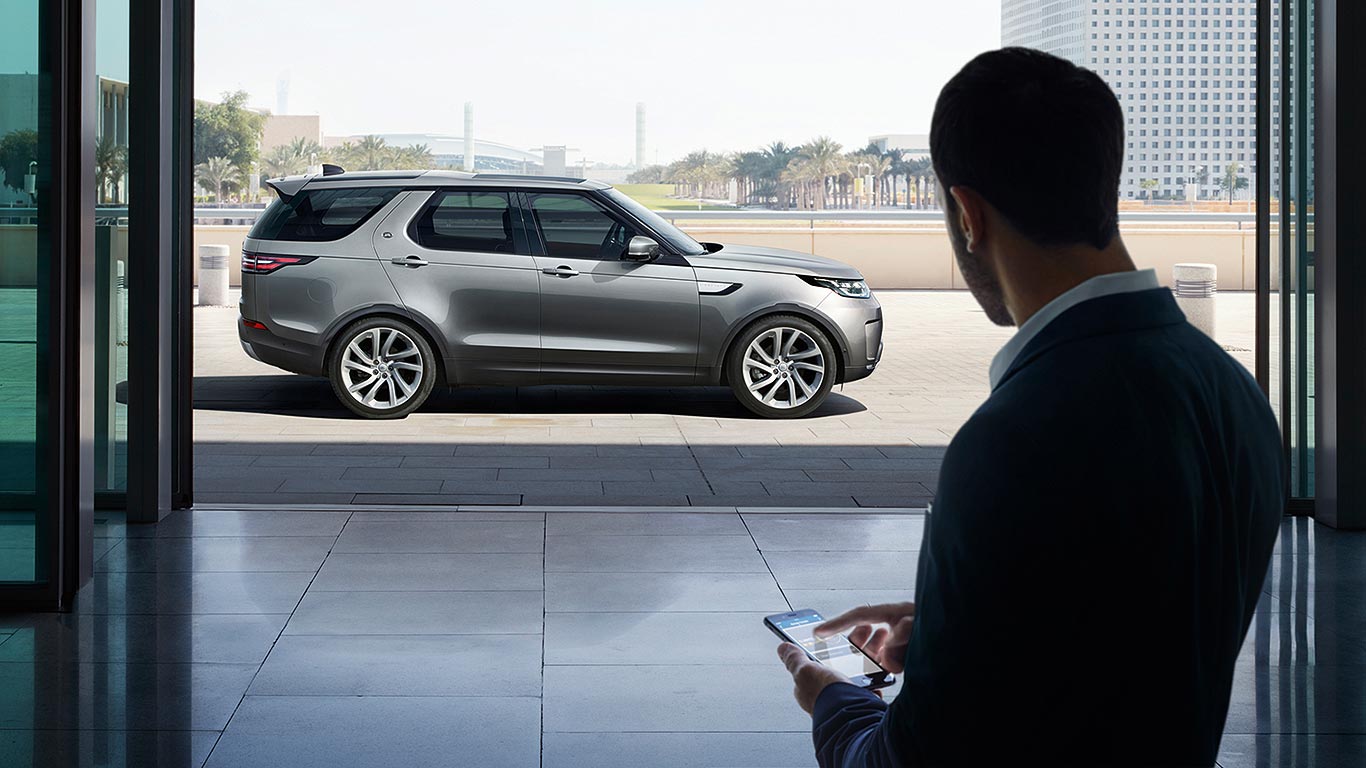 Owners will even be able to communicate remotely with their new Discovery, courtesy of JLR’s clever smartphone app. Not all rivals offer this, and it’s functionality the Discovery has previously only been able to dream of. Range Rover sophistication is now available on the family-friendly Land Rover. 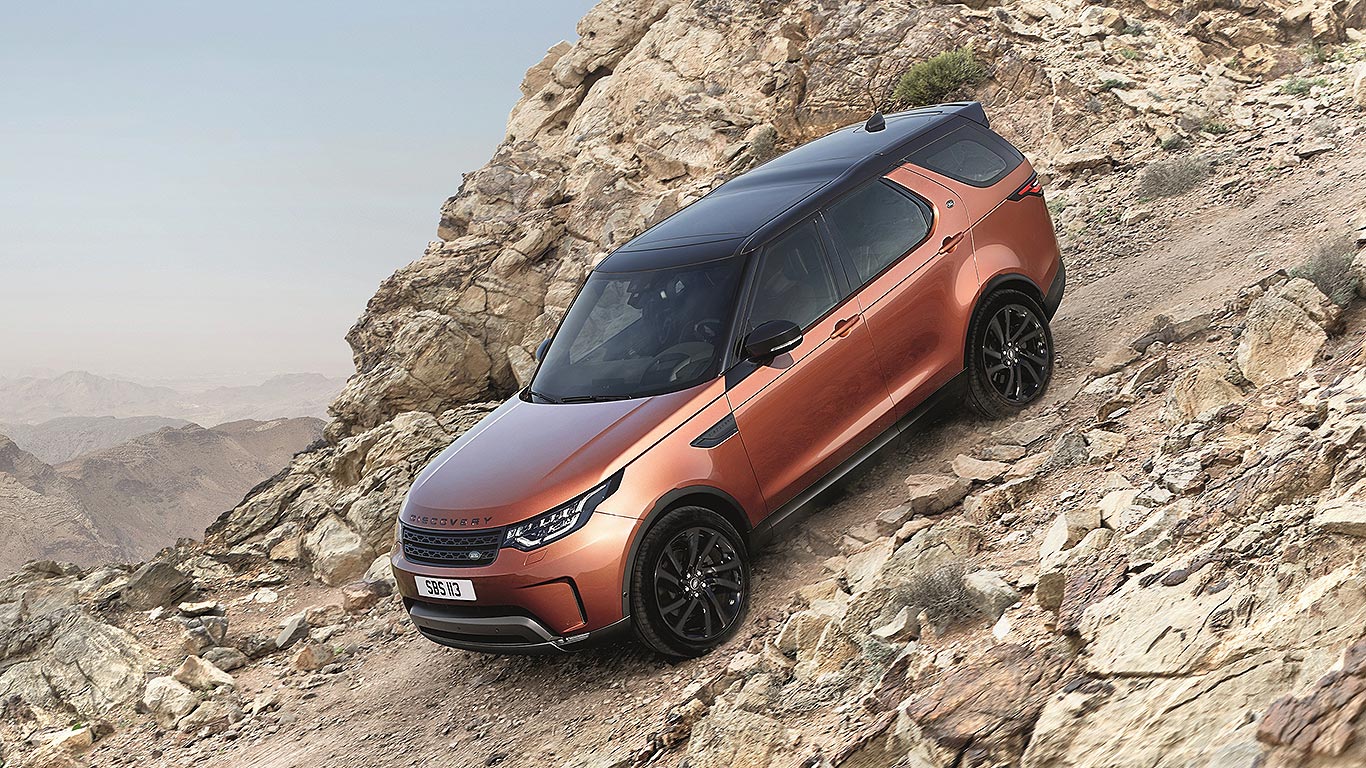 If you’re a die-hard fan, you’re at this stage probably panicking. Has Land Rover destroyed the Discovery’s bulletproof go-anywhere ability? Not one bit. A massive 200mm increase in wading depth alone – up to 0.9m – is evidence of that. The 283mm of ground clearance is up 43mm and other metrics simply “put Discovery in a class of its own,” says Land Rover. The all-terrain ability is simply described as “supreme”. 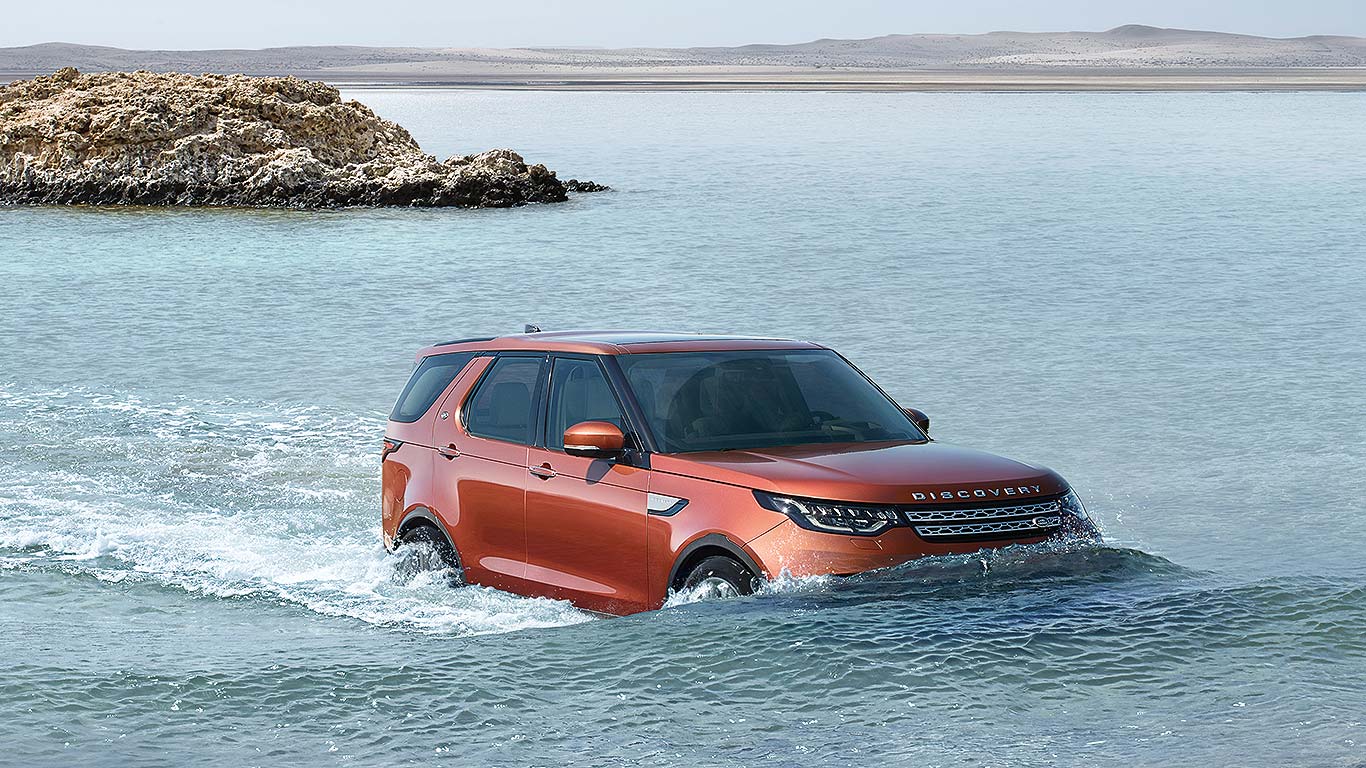 The suspension has an almost ridiculous 500mm of wheel articulation and a standard two-speed transfer box means all models offer high- and low-range gears (and the driver can switch between them at speeds of up to 37mph). The Land Rover All-Terrain Progress Control ‘off-road cruise control’ is also available, as is tech wizardry that helps it pull away smoothly even on virtually grip-free surfaces (perfect for sudden wintery British snowfall).

What’s under the bonnet? Because it’s now all-aluminium, greener and cleaner engines can be fitted. The entry unit is actually a 2.0-litre turbodiesel, producing 240hp and returning a stonking 43.5mpg. But it can also do 0-62mph in 8.3 seconds, making it as fast as the old 3.0-litre V6 Discovery, despite being so much more efficient. There will also be a 258hp 3.0-litre V6 diesel and a 340hp 3.0-litre supercharged V6 – yes, that is the engine from the Jaguar F-Type… All engines use a world-class ZF eight-speed automatic.

Double wishbone air suspension will mean the Discovery is transformed on the road, promises JLR dynamics guru Mike Cross. “We set out to deliver improved cornering dynamics with better body control than before – but we knew this couldn’t come at the expense of Discovery’s legendary ride quality.” It sounds like it’s going to drive in a way old Discoverys could only dream of. Oh, and it still leads the class with a 3.5-tonne towing weight, with Land Rover introducing semi-autonomous Advanced Tow Assist tech that takes the pain out of parking a trailer.

Family-focused cars must sweat on safety, so Land Rover’s fitted a plethora of electronic kit to hopefully keep Euro NCAP happy. The old Discovery perhaps used its enormous weight to shrug off crashes, but the new one is way more sophisticated than that. All the cameras on board will autonomously help you avoid crashes, too.

Has Land Rover nailed the high-tech new Discovery? It certainly seems to have. This is Land Rover’s big family-friendly star car and the interior seems uncommonly well optimised for that role. It’s roomy, comfortable and set to be plush and luxurious like no Discovery before. It’s also all-aluminium, so much lighter and potentially better to drive – and packed with the modern tech buyers now demand.

The styling suggests it’s now more of a Range Rover than a Land Rover, but the firm insists no off-road potency has been lost. If anything, it’s even more wildly capable here too. Which just leaves the sophisticated new appearance. How will die-hards react to it, and will traditionalists accept this is what Land Rover had to do in order to take on the Audi Q7 and Volvo XC90? Time will tell. Indeed, the launch event and Paris Motor Show debut will tell plenty.

We’ve briefed you about the highlights, now it’s over to you to click on and see more of the Discovery, and make your own first impressions of this vitally important new Land Rover. Over to you…