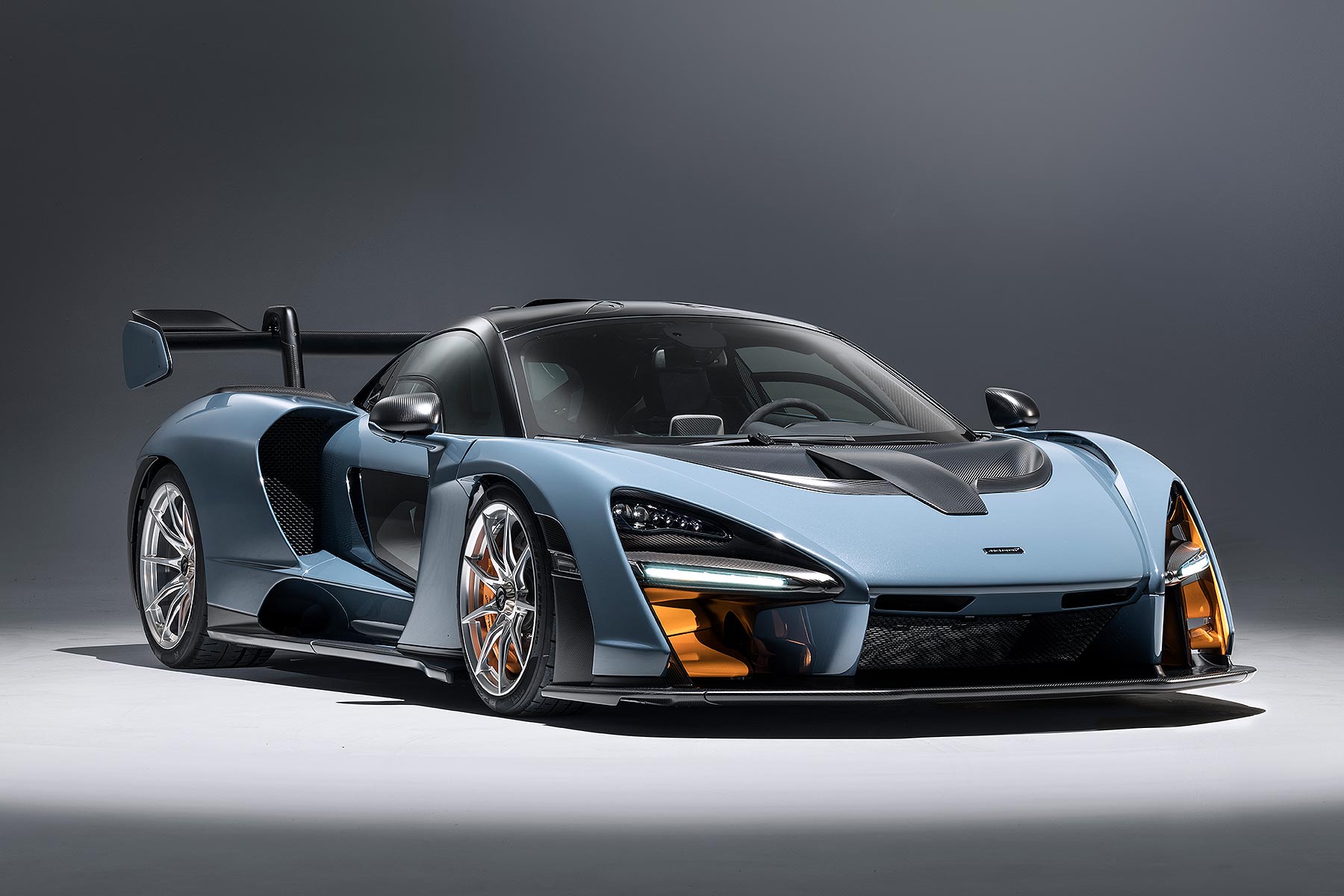 The McLaren Senna lives up to the three-time World Champion driver’s name by being the most extreme road car ever built by the British firm. It’s a bona fide McLaren Ultimate Series machine that is said to provide the purest connection between driver and car ever achieved by the company.

After revealing it during its 2017 festive party at McLaren Automotive HQ in Woking, the firm is now releasing full details about the new hypercar – with the headline being a combination of 800hp, 800Nm of torque and 800kg of downforce.

The latter is why it looks as extreme as it does. McLaren insiders admit they’ve had to bite their tongue since the car’s release, as onlookers question why its styling is so uncompromising. “Form follows function,” says McLaren: it’s aggressive because the active aerodynamics are so damn powerful.

“You commit yourself to such a level where there is no compromise,” Ayrton Senna once said. “You give everything you have; everything, absolutely everything.” Now, hopes McLaren, it should be clear why the Senna looks like it does.

In a special ceremony to mark the opening of its new composites factory in Sheffield, England, McLaren told us everything about the new Senna. Before christening the new factory by laying down some rubber with the new car – fittingly, with an original Senna McLaren watching on.

Here’s what you need to know about the McLaren Senna. 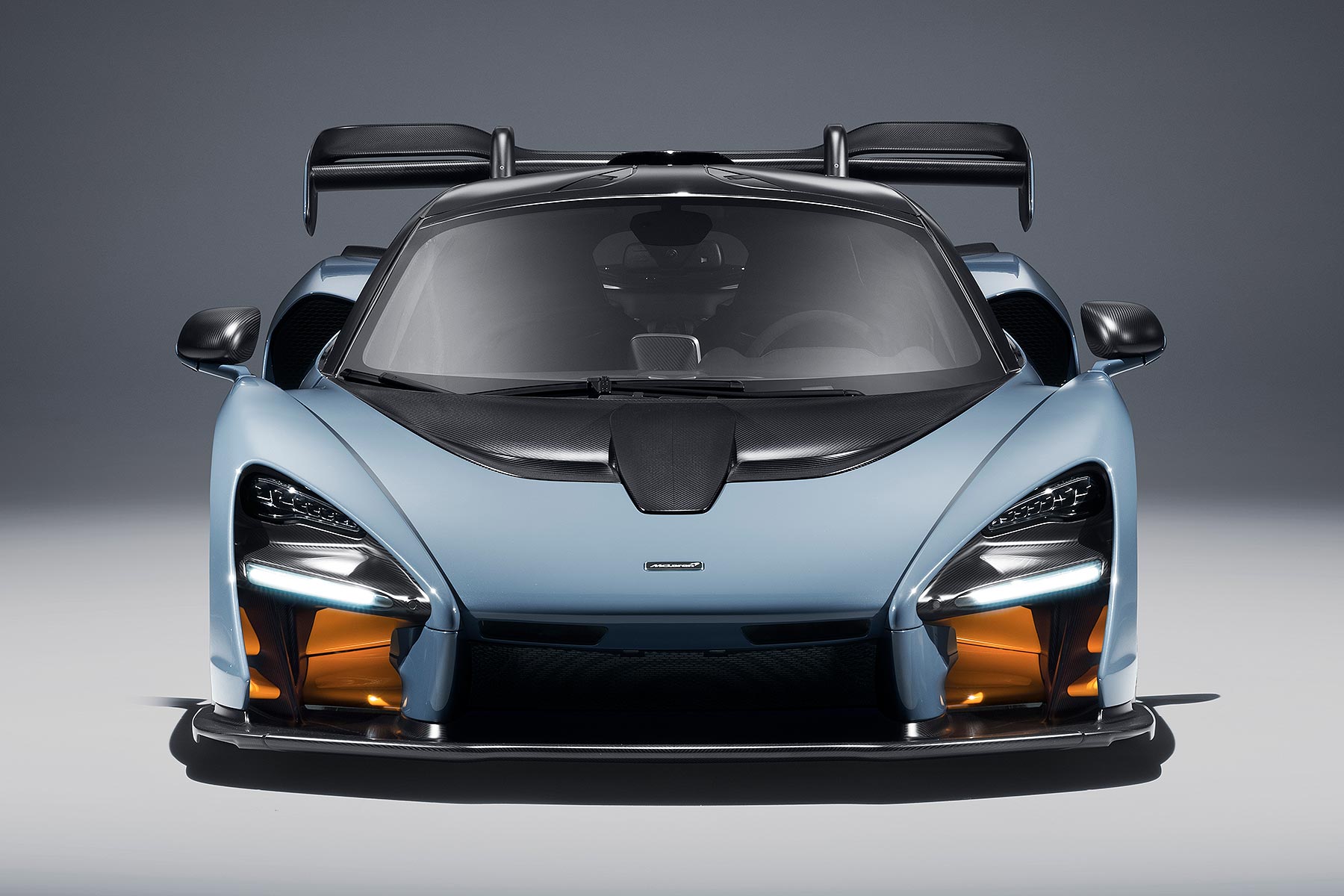 Unlike cars such as the Ferrari FXX and Aston Martin Valkyrie, the McLaren Senna is no track-only special. It may be the ultimate track-focused McLaren, but it’s still legal for road use. “But not sanitised to suit it,” adds McLaren. This is a car for which the racket from air rushing through the roof-mounted ‘snorkel’ intake is described as a positive.

McLaren Automotive CEO Mike Flewitt calls it a car like no other, in which every element has an uncompromised performance focus. The rawest, most responsive, most engaging McLaren ever. Organic styling is out, a design language “purposefully fragmented in its pursuit of absolute performance” is in. 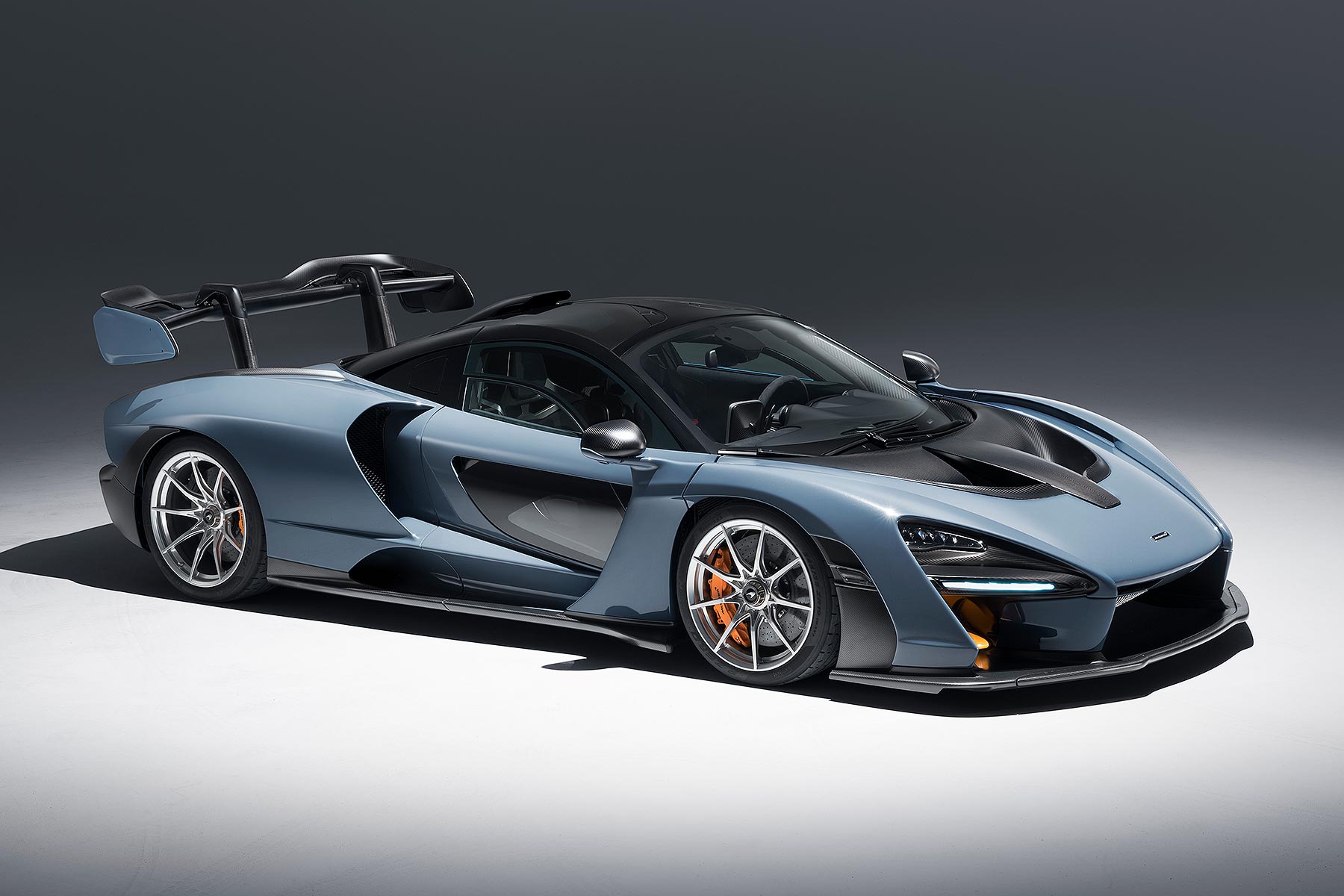 Aerodynamics are active front and rear. The front aero blades and ‘swan neck’ rear wing constantly vary their profile and there’s even an air brake function when you slam on the anchors. Downforce levels are maintained even when turning into a corner, resulting in “extraordinary” speeds through the bends.

“You cannot follow a single line from the front to the rear without it massing through a functional intake or vent,” says McLaren. In spite of all the criticism, the designers reckon it’s the most honest-looking McLaren they’ve yet achieved.

Even one of the paint options is unique. Caliber Black is a special lightweight colour that’s been formulated to cut the amount of paint actually needed to paint a Senna. 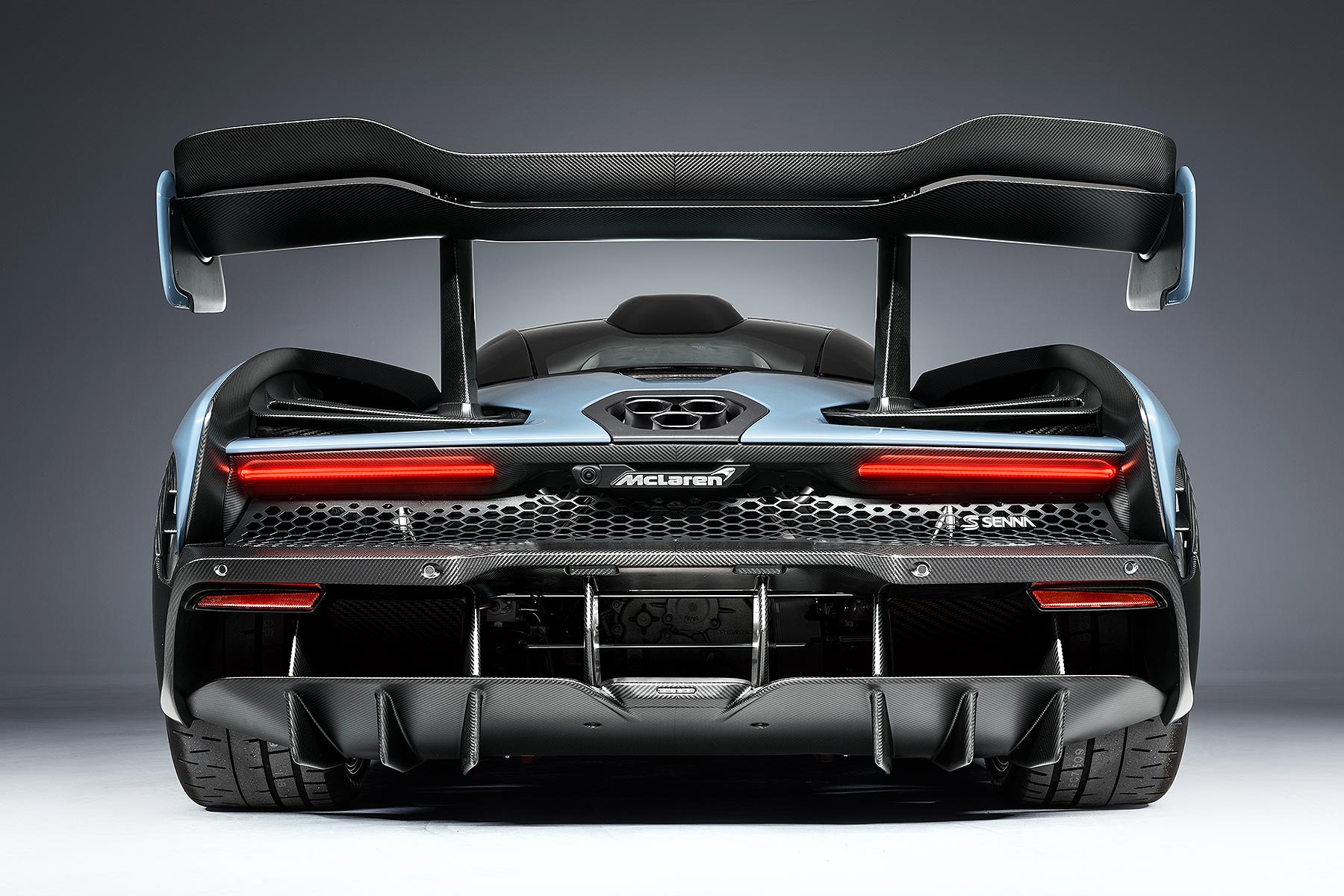 The familiar McLaren 4.0-litre V8 engine has been tuned up to 800hp and 580lb ft of torque (800Nm). It’s McLaren’s most potent road car engine yet. It will do 0-62mph in 2.8 seconds, 0-124mph in 6.8 seconds, 0-186mph in 17.5 seconds. And because, at 1,198kg, it’s the lightest McLaren since the original F1, it boasts a power-to-weight ratio of 668hp per tonne. Unique components include bespoke cams and by-cylinder ion sensing that allows higher pressures and temperatures than other McLaren engines.

An Inconel and titanium exhaust is piped through the rear deck, shaped to not disturb the rear aero. McLaren’s made it road legal with auto-close internal valves – but for continues with less strict noise regulations, a valve-less twin-exit unit is offered, sans silencer box and third exhaust exit.

McLaren reckons it’s ferocious, gets 10dB louder for every 2,000rpm, quite different to any other McLaren road car: it’s more like a motorcycle race engine, says the firm. 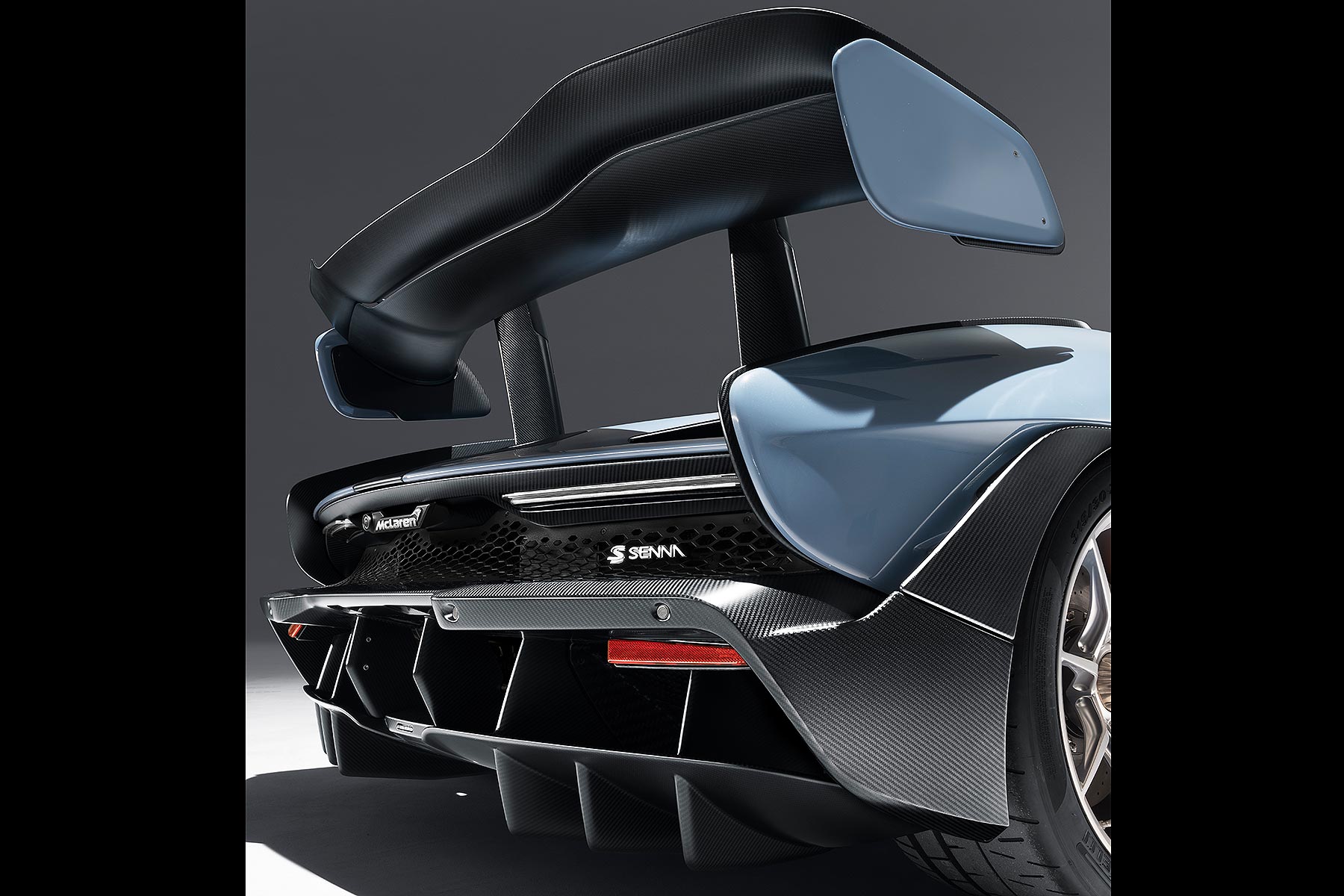 Pumped-up racing-spec carbon ceramic brakes will take it from 124mph to a standstill again in 100 metres.

Suspension uses RaceActive Chassis Control II (RCC II), an evolution of the 2012 P1’s setup. Adaptive dampers are hydraulically connected both left to right and front to back. Like the 720S, it’s continuously variable: unlike the 720S, there’s now a Race mode that lowers the ride height and centre of gravity, and “significantly” stiffens it.

Conventional springs and anti-roll bars have thus been ditched, along with the compromises to pitch, roll, heave and warp stiffness. The Senna’s hydraulic setup is staggering in its scope and even McLaren’s top-level descriptions of what it can do stretch to many, many pages. One thing that caught our eye is McLaren Variable Drift Control, or VDC: it “allows a driver to hone their skills,” and presumably become a drift king in their £750k Senna.

McLaren’s wrapped the Senna around its latest Monocage III central carbon fibre tub, the strongest monocoque it’s ever made for a road car. All the bodywork is carbon fibre as well, contributing to its bantamweight. 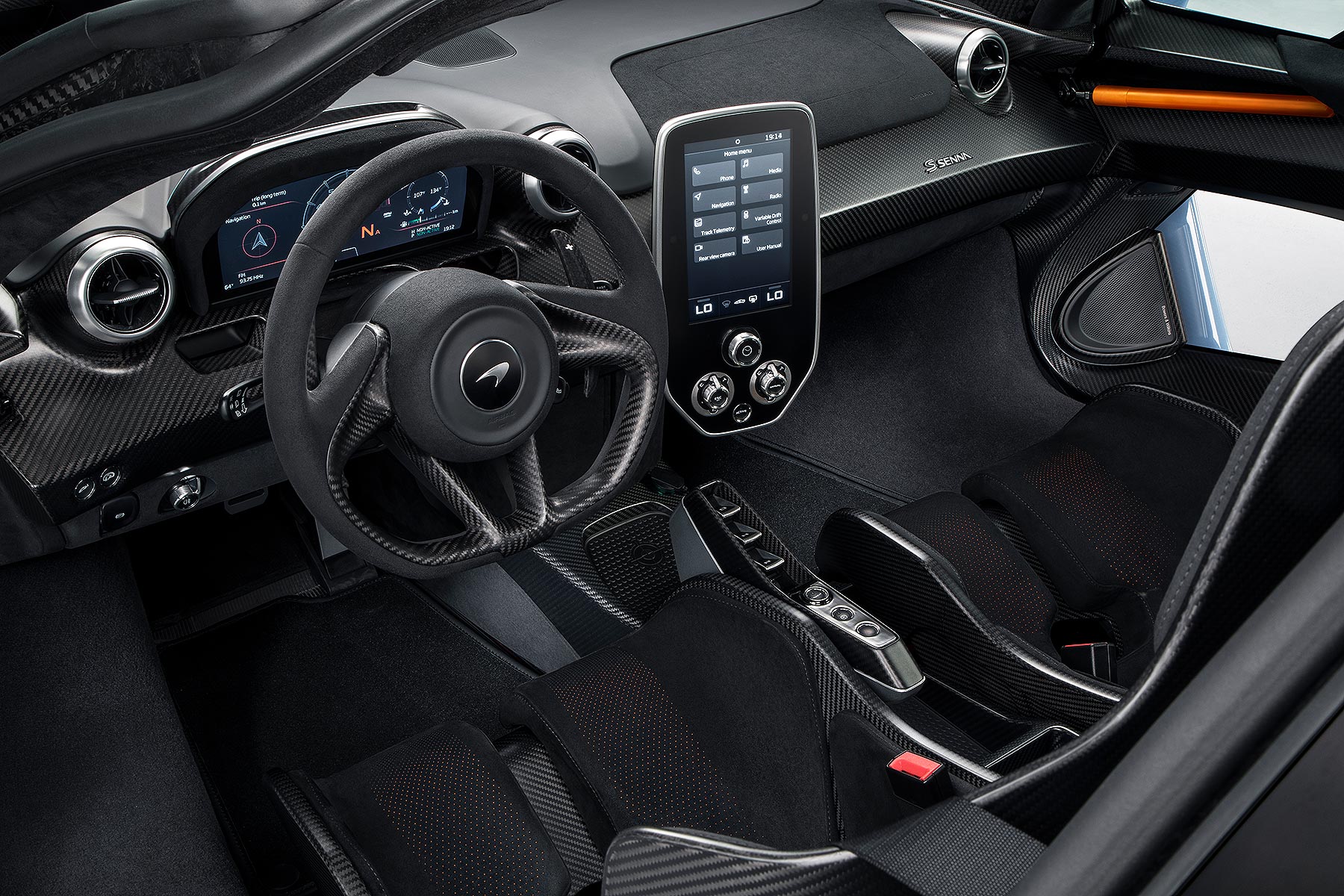 If you ever get to drive a McLaren Senna, prepared to be “hardwired into the experience at all times” – through the steering wheel, seat, even the pedals. The firm says it’s abandoned its trademark usability in the focus on making it thrilling. There have been no compromises here.

A standout feature are optional glazed lower doors, adding to the car’s already-amazing visibility and making it even more thrilling on a racetrack – you can see the kerbs you’re pummelling. They’re made of Gorilla Glass, so should withstand being smashed by stones or tyre marbles.

It’s been fully stripped back inside, using carbon fibre and Alcantara instead of fancy soft-touch plastics. Even the door struts are exposed, to save weight: the chance to colour-code them is a first for any car brand. 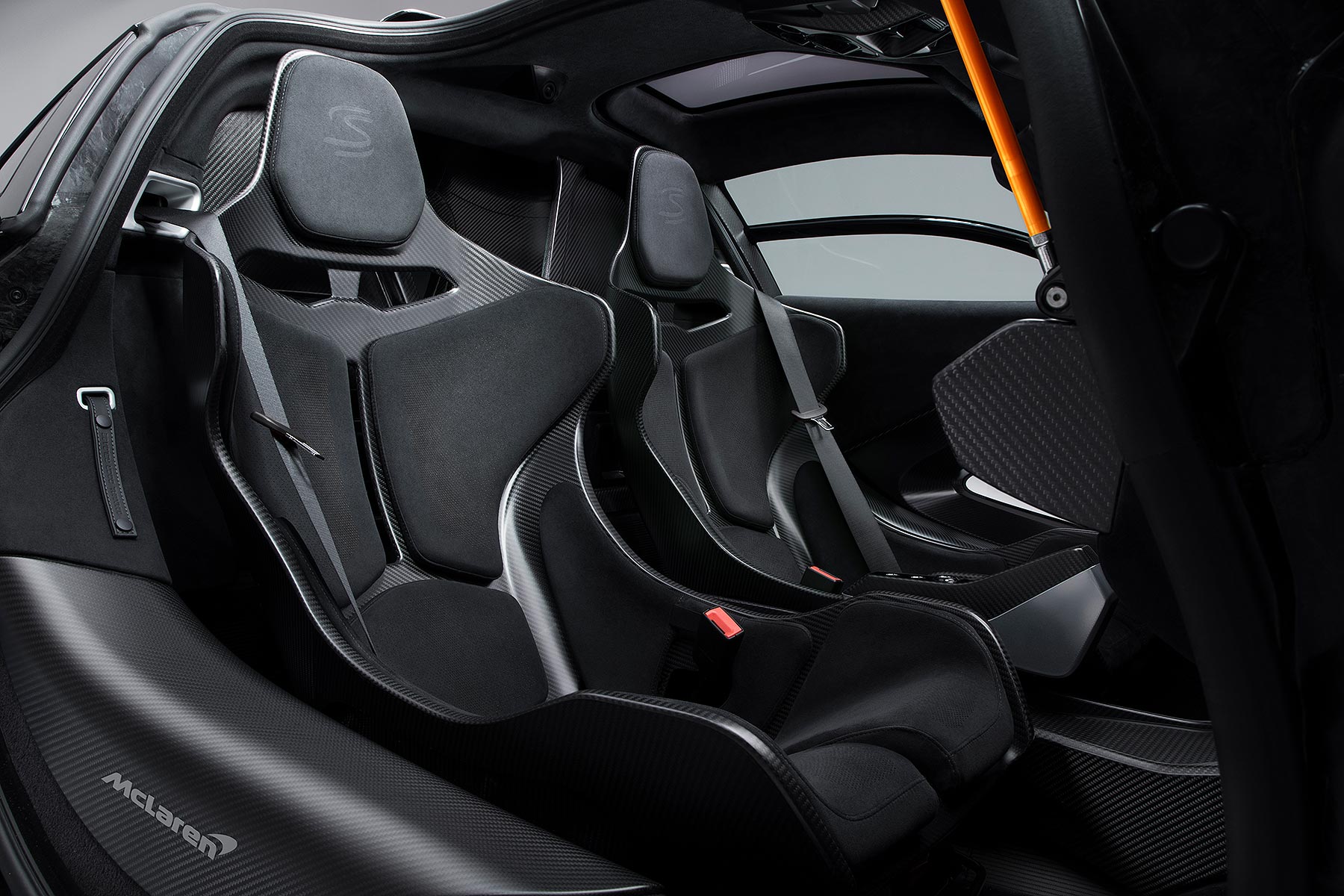 Seats are super-lightweight and weigh just 8kg each. They’re not fully-trimmed, having padding only in the right places. This doesn’t only look cool, McLaren also says it helps keep overall-clad occupants cool when driving hard on a racetrack. The driver’s stress levels are managed by minimising buttons inside, and locating the essential controls on the roof console. And there’s an optional ‘push-to-drink’ system for keeping hydrated when working it hard.

Owners can also choose to have McLaren Track Telemetry fitted, capturing data in real time. It can be augmented by a three-camera system (one looking forward, one mounted inside and one in the rear bumper for corner exits) for the ultimate F1 post-trackday analysis. 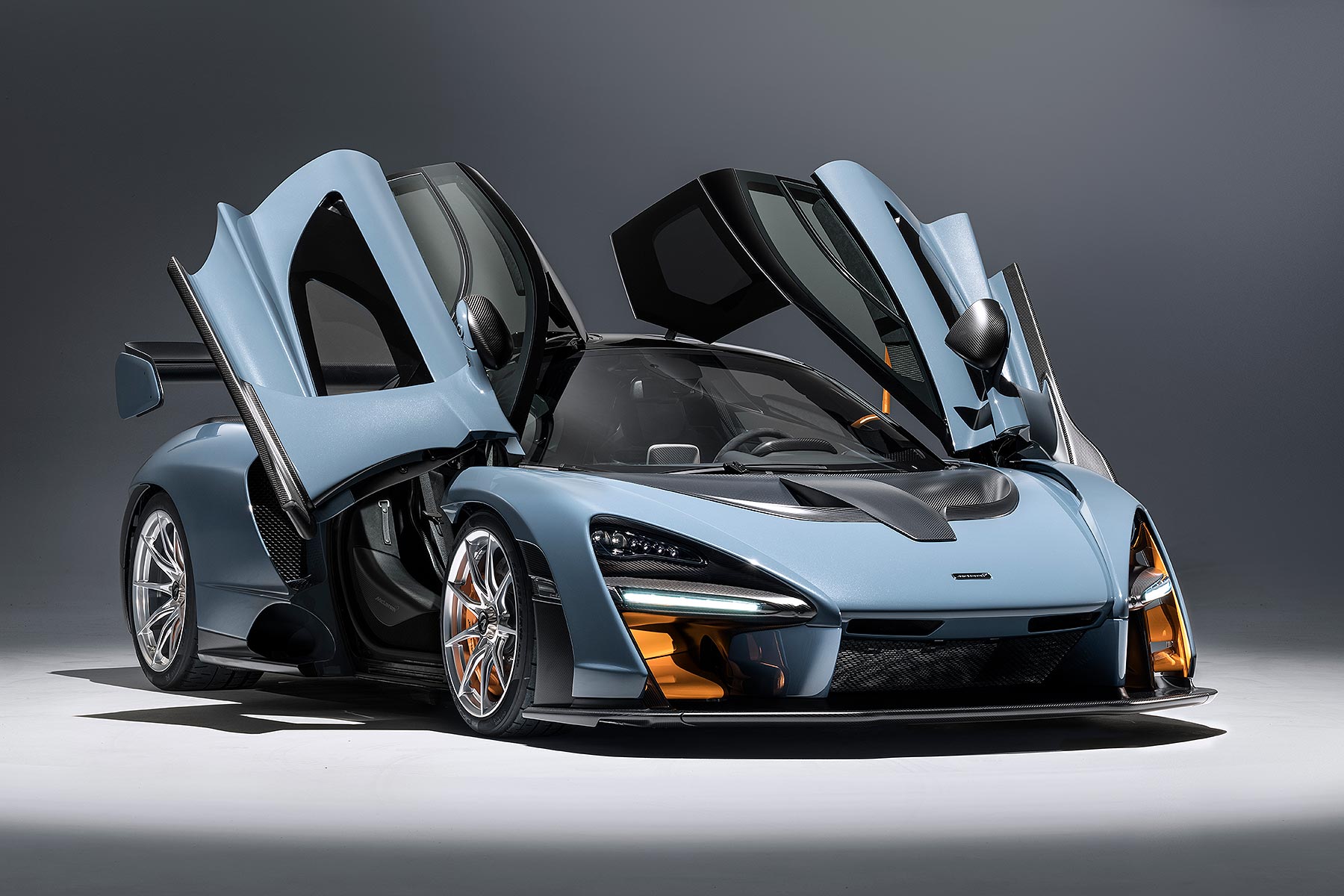 For added authenticity, Senna’s nephew Bruno is working with McLaren to hone the Senna. He reckons it honours his uncle “because it is so utterly focused upon the driver, and their absolute connection with the vehicle”. Don’t think it’s raw and rabid though, adds McLaren. “This is not a vehicle balanced on a knife edge; the intuitive connection comes from trust, from the fact that car and driver are as one”.

It’s “real performance,” reckons McLaren Automotive vehicle line director Andy Palmer, “accessible and attainable because of an intuitive connection”. It’s set to be quite some car.

So now can you love the way it looks?

Click on the images to see the McLaren Senna in full