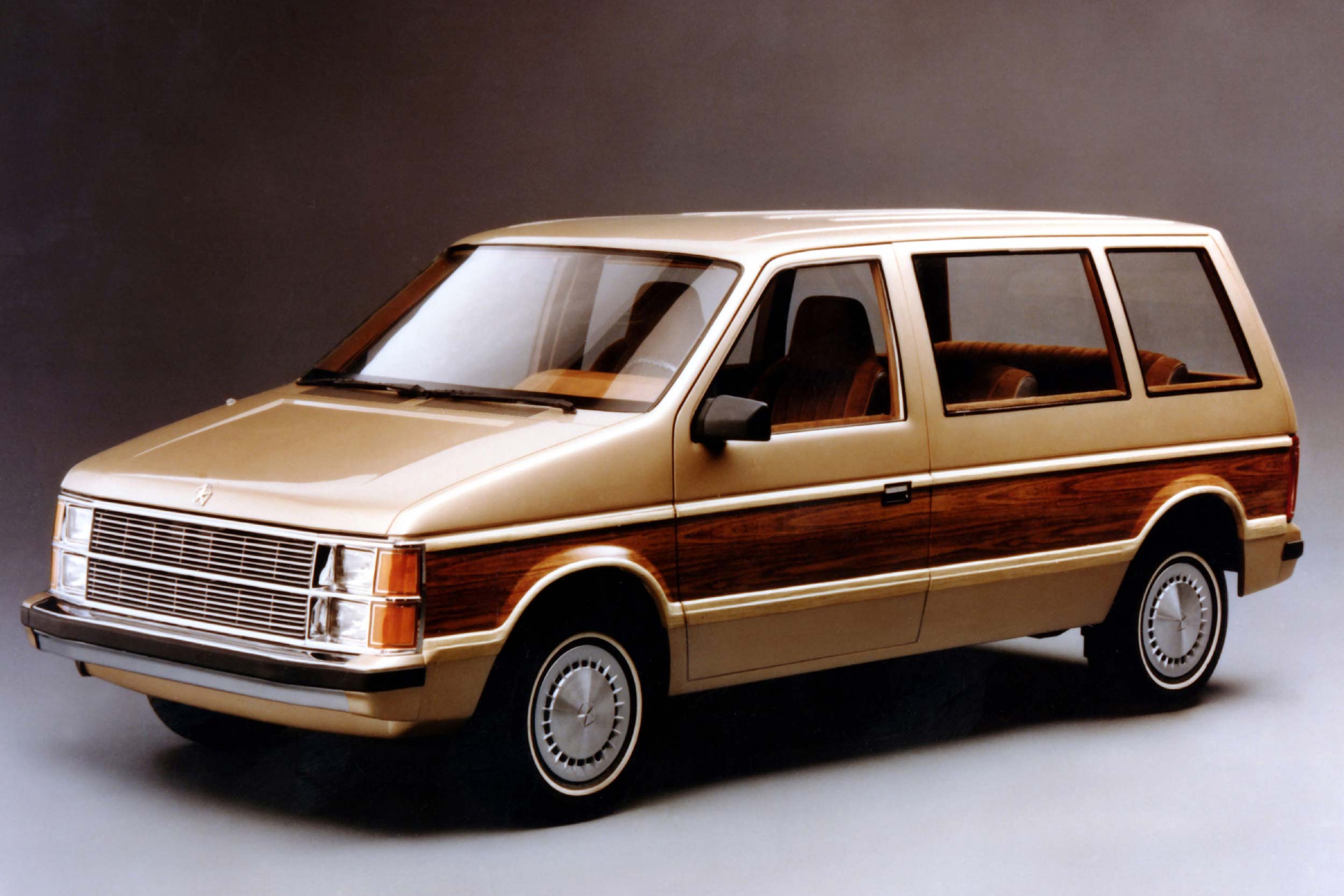 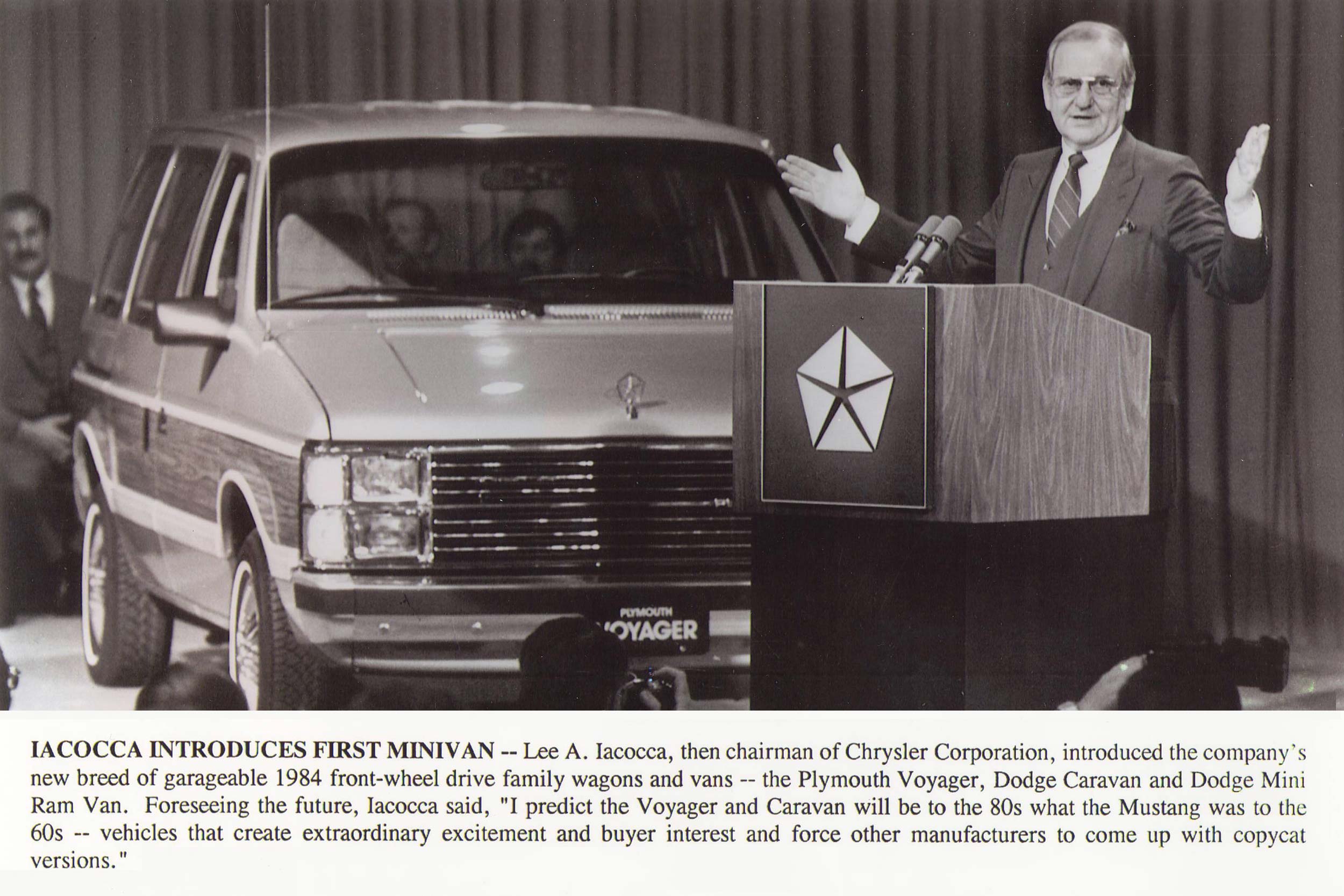 November 2 is the 35th birthday of the minivan. On that day back in 1983, the first example rolled off the line in Windsor, Ontario. The lauded vehicle was championed through design and development by then-CEO Lee Iacocca (above), the “Man Who Saved Chrysler”.

The new vehicle was a sales smash. It had the economy of a small car, could carry an entire family and all their stuff with the seats removed, and would even haul a whole 4’ x 8’ sheet of plywood with the seats removed. It was an instant success, and the rest of the industry was forced to create models of their own.

For the pedandtic, the design was preceded by the Stout Scarab before WWII and the DKW Schnellaster after, along with the VW Van (a.k.a. Microbus, Type 2, Transporter, Kombi . . . Stop it, pedants!) the Dodge A100, Chevy Greenbriar, and others. The Chrysler version is the first true minivan as we know it, however.

So while we’re certainly not pedantic when it comes to cars, there is a lot to love and celebrate about the minivan. Let’s take a closer look at the history and also at the most exciting examples of the breed. Yes, there are some. We promise. 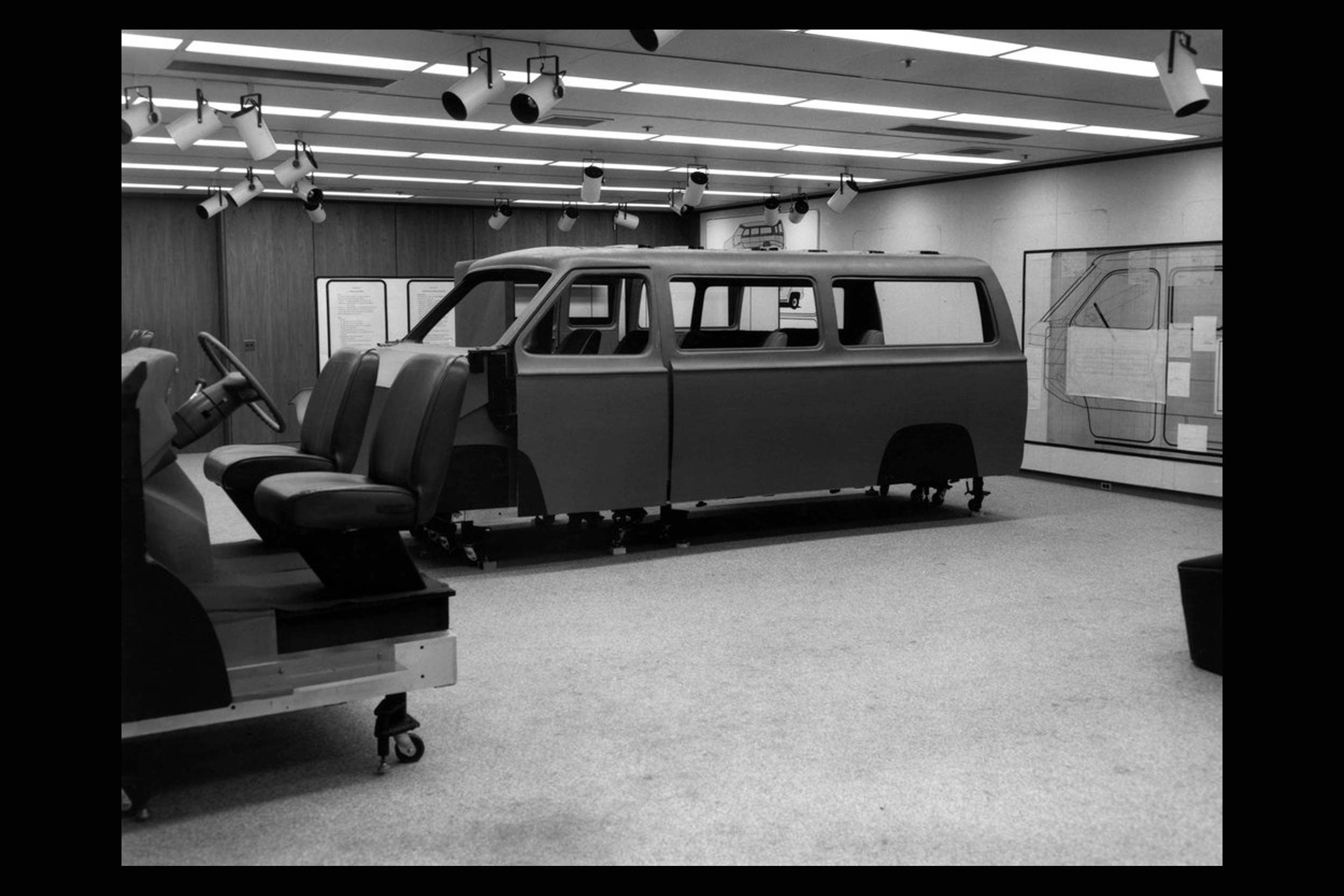 Chrysler began working on a small family van around 1972. The concept shared much with the previous rear-wheel drive A100 van and never progressed beyond sketches and models. 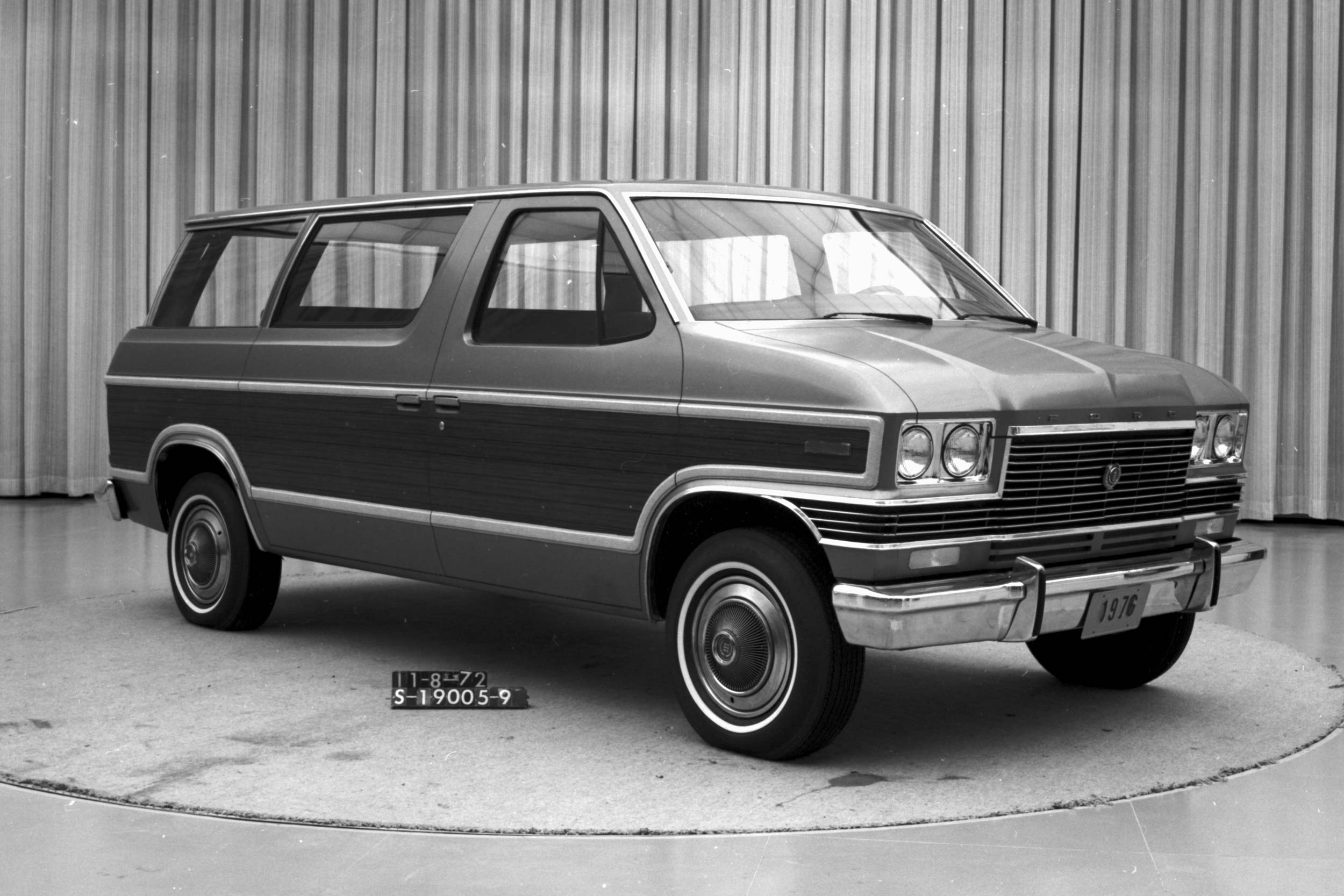 Before he moved across town to Chrysler, Iacocca was president of Ford. He approved a “garagable family van” project in 1972, slated to sit between the LTD Country Squire full-size station wagon and Club Wagon full-size van.

The Carousel had a roof height of approximately 6 feet, lower than the 6’4″ Volkswagen Microbus. A 460-cid/7.5-liter V8 from the Lincoln Continental was selected for power.

Then 1973 happened and, along with it, the OPEC oil embargo. The drivable prototype was garaged for good.

Around the same time, Chrysler was gasping its last breath, and hired Iacocca to turn the company around. He secured a $1.5 billion government bailout in late 1979 and invested in the creation of cars customers might actually want to buy.

Enter the K-Car. A common K-platform was used extensively across the brand range. Many parts were interchangeable, reducing the variety needed and saving much-needed cash. The company in turn passed the savings along to customers, and the new designs were a huge success. The company repaid the loan several years ahead of schedule and taxpayers realized a $350 million profit on the deal.

Iacocca had also secured the rights to the van concept from Ford, and took it with him to Chrysler. Designer Hal Sperlich (father of the Mustang) had worked on the design and soon followed Iacocca. Using the K-platform as a base, the modern minivan was born. 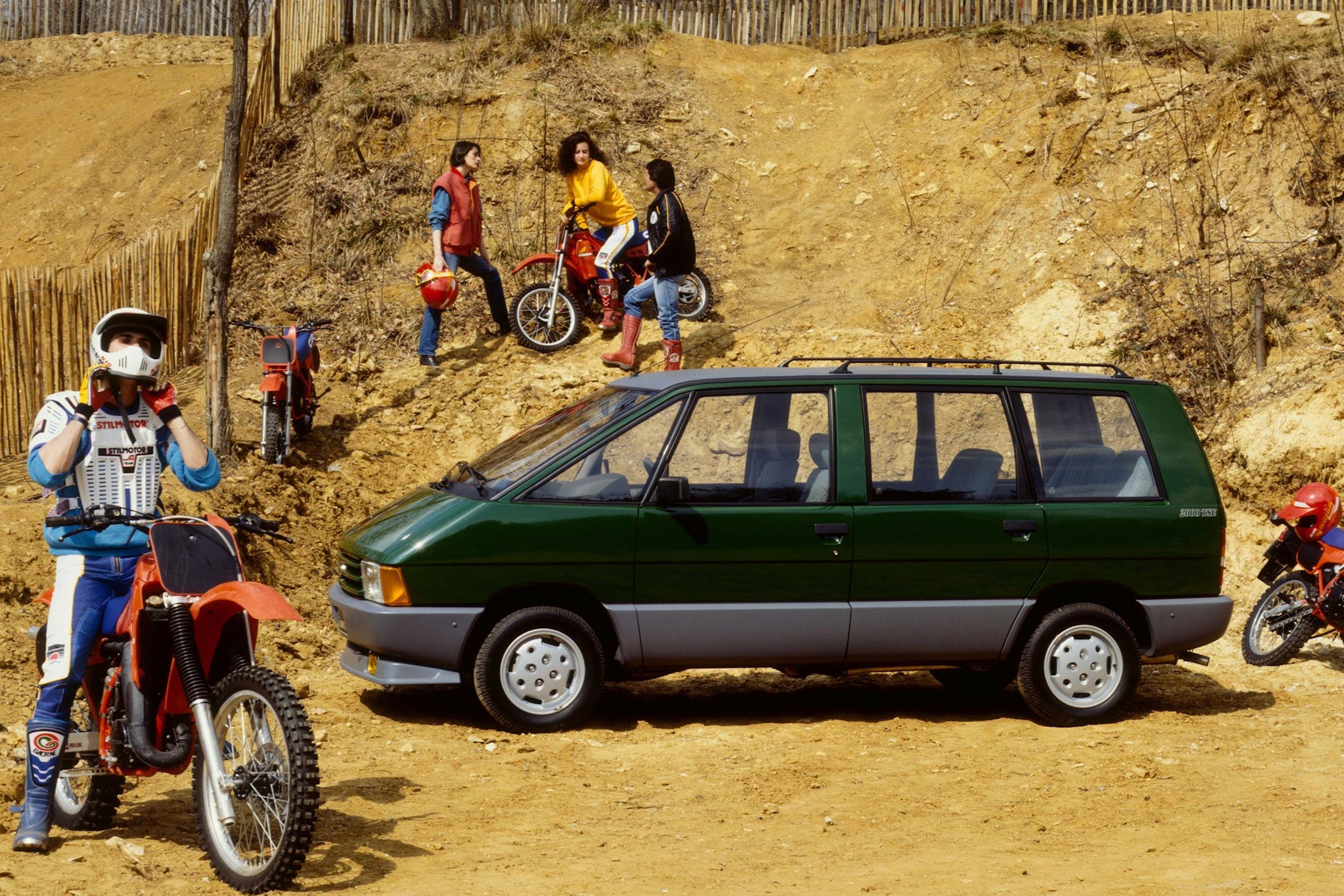 As non-pedants, we must bring up the Renault Espace, released mere months after the Chrysler. It was the 1970s brainchild of Chrysler UK designer Fergus Pollock (we have no trouble believing he’s British with a name like that).

In 1978, Chrysler Europe was sold to PSA Peugeot Citroën for the princely sum of USD $1.00, arguably too much given Chrysler’s massive debt. The nascent Espace was deemed too risky a design and was handed off to Matra, who brought it to Renault. 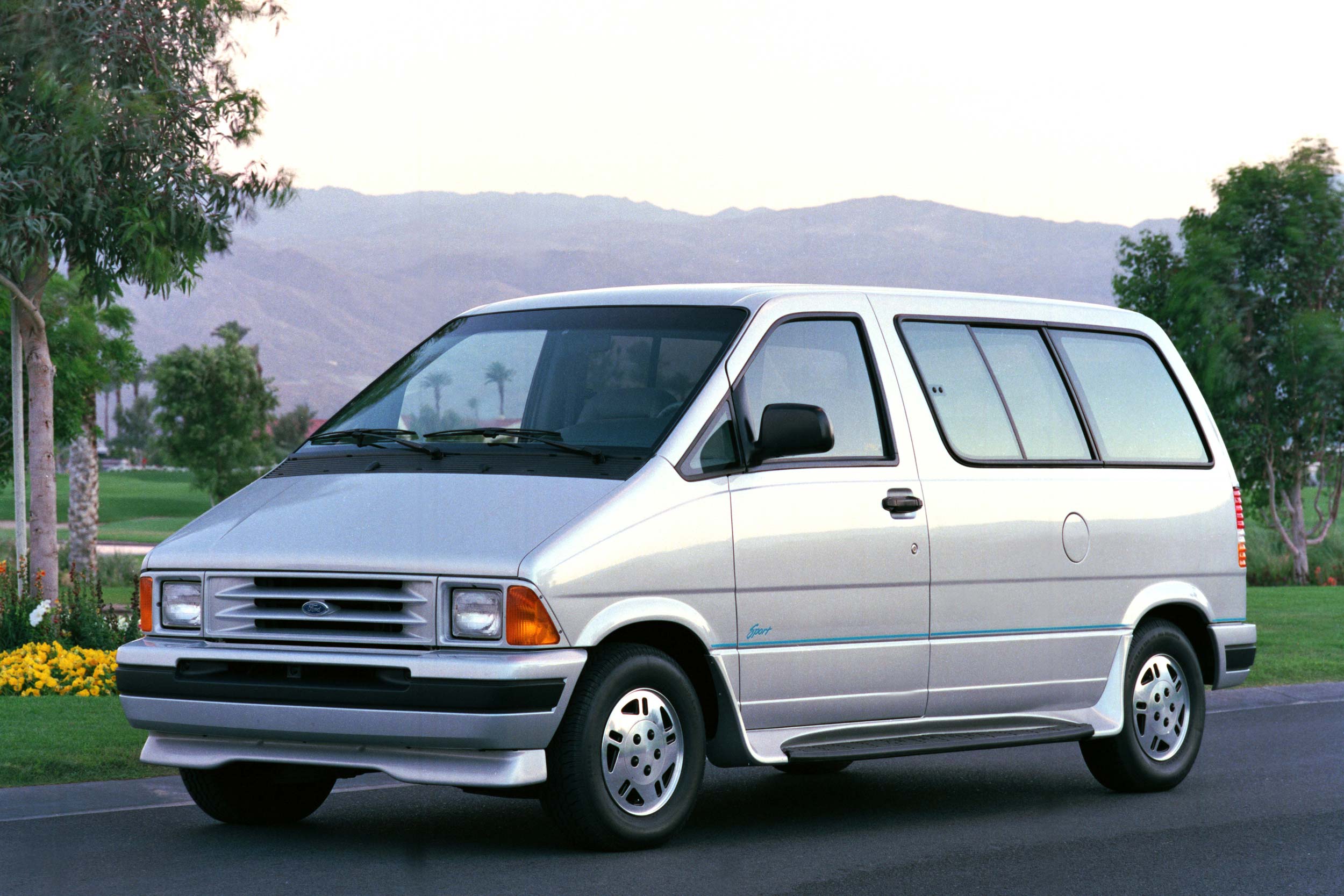 Ford learned that Chrysler was developing a capacious family vehicle in the early 1980s and looked again at their “garageable van” concept. The oil crisis of the 1970s made the Carousel obsolete: it had been based on a full-size Econoline van and did not meet the economy needs of the time. The only thing that carried over to the new project was the six-foot height.

Ford mounted the powertrain from the rear-wheel drive Ranger compact pickup into a chassis designed solely for the new people mover, with model-distinct suspension. Plastic and aluminum were used extensively to save weight and improve efficiency.

The Ford Aerostar concept was unveiled in 1984 and went soon into production for 1985. 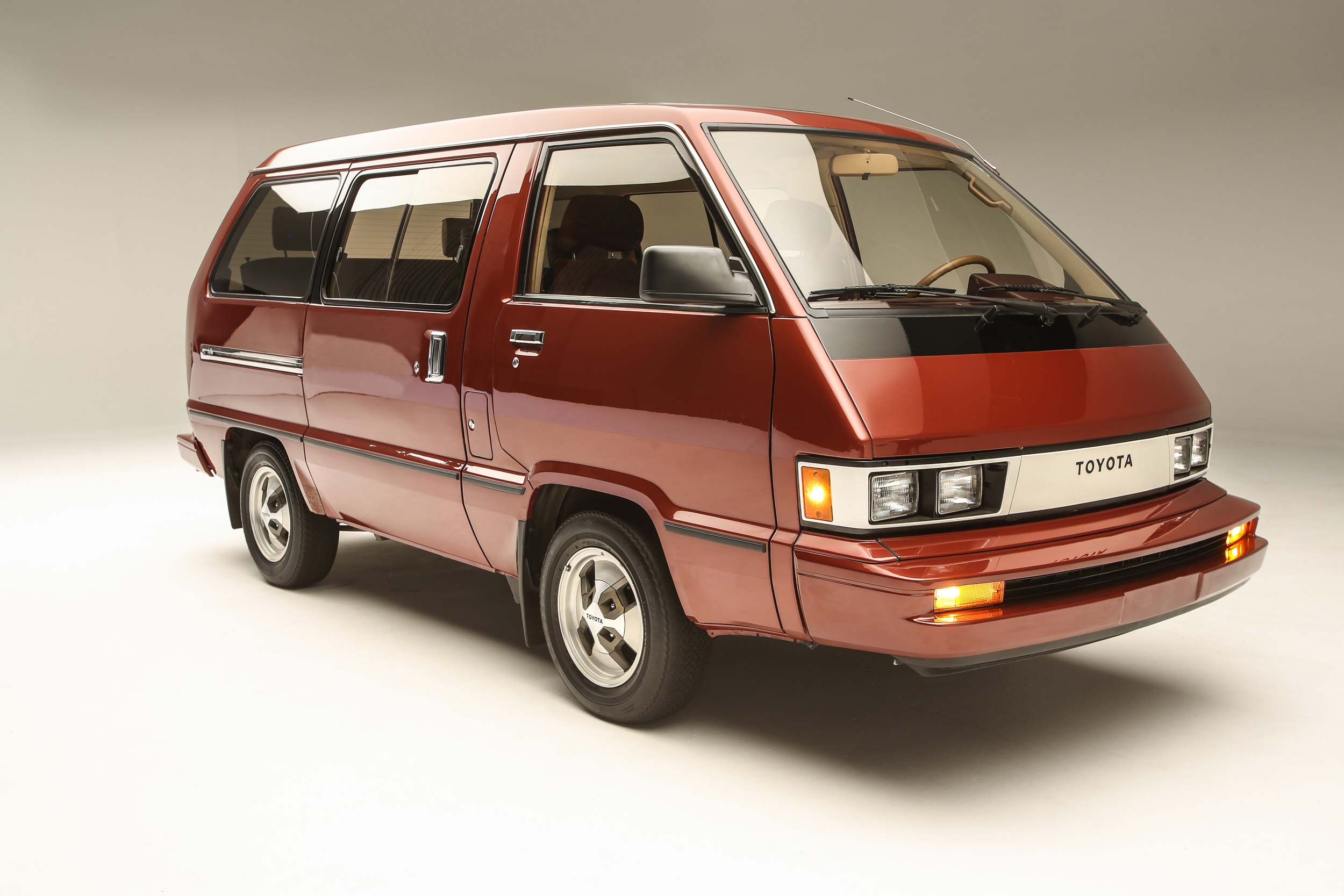 “But, wait!” exclaims the pedant in a haughty tone. “What about the Toyota Van?”

Toyota’s entry into the minivan segment  landed on our shores in 1984, the debut year of the Dodge Caravan and Plymouth Voyager. It was originally designed as a cargo van for city use, and was lightweight, economical, and highly maneuverable.

In passenger guise, it never quite caught on with American tastes. It was too small to be passenger van and too van-like to be a minivan. It had a short wheelbase and the engine was under the passenger seat. The driver sat on top of the front wheels, and the whole driving experience was unfamiliar to most.

Quirks aside, the Van proved to be a charismatic and nearly indestructible companion. Like many Toyota trucks of the era, they are highly prized today. 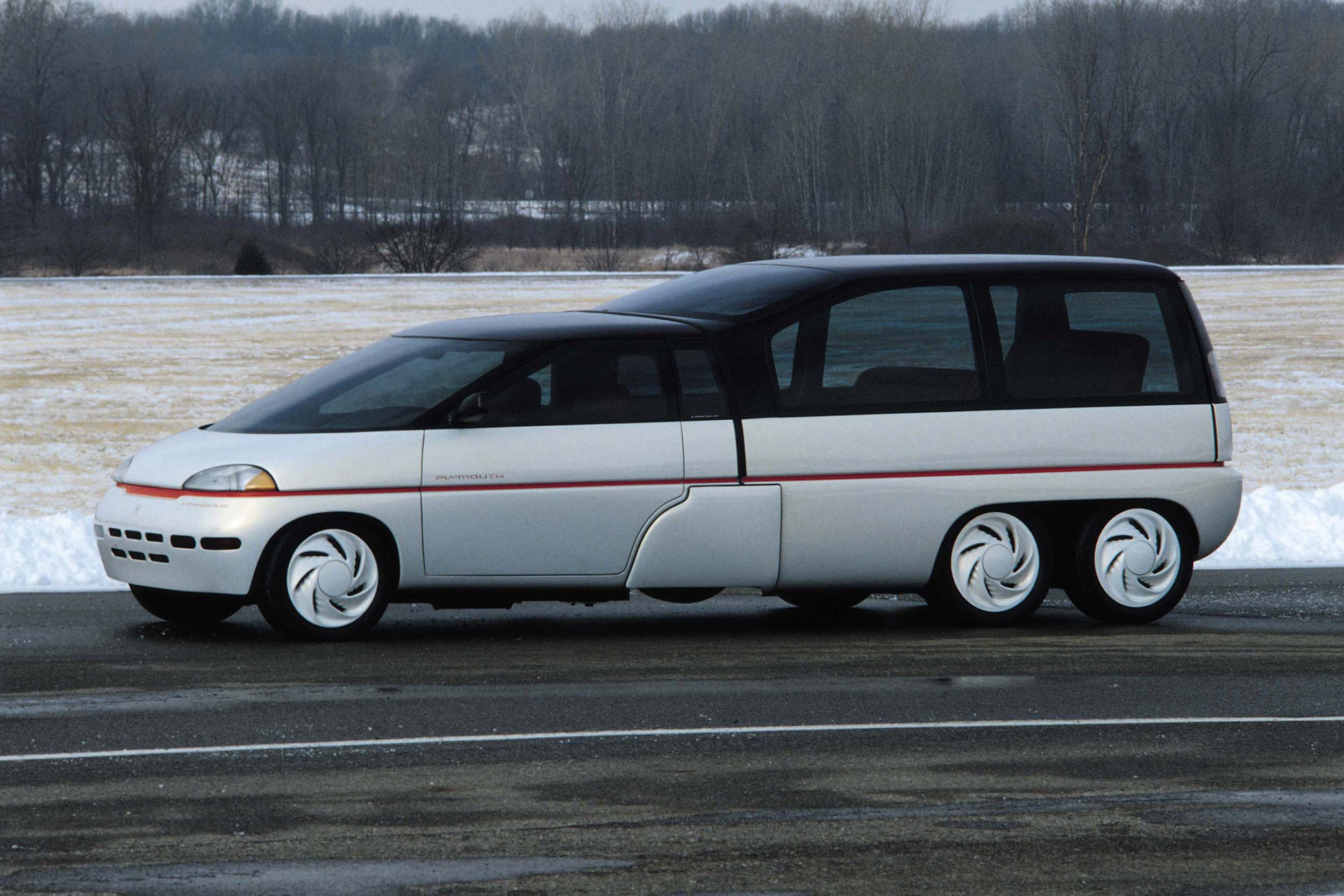 Remember Plymouth? Even though the company disappeared in the early days of the new millennium, the storied marque left an indelible imprint on automotive history.

Chrysler designer Tom Gale of Dodge Viper and Plymouth Prowler fame is also credited with the 1989 Plymouth Voyager III concept vehicle. It’s actually two pieces: the front acts as a tractor and the rear as a trailer. When separated, the tiny front section drops two hidden rear wheels for easy in-town maneuverability. Connected, there’s plenty of room for the entire Kettle clan and all their kin, kith, and kit.

Each segment had an independent four-cylinder engine. When economy was needed, only one would operate. When power was needed, the units were electronically linked and all eight cylinders would rocker the Voyager down the road. 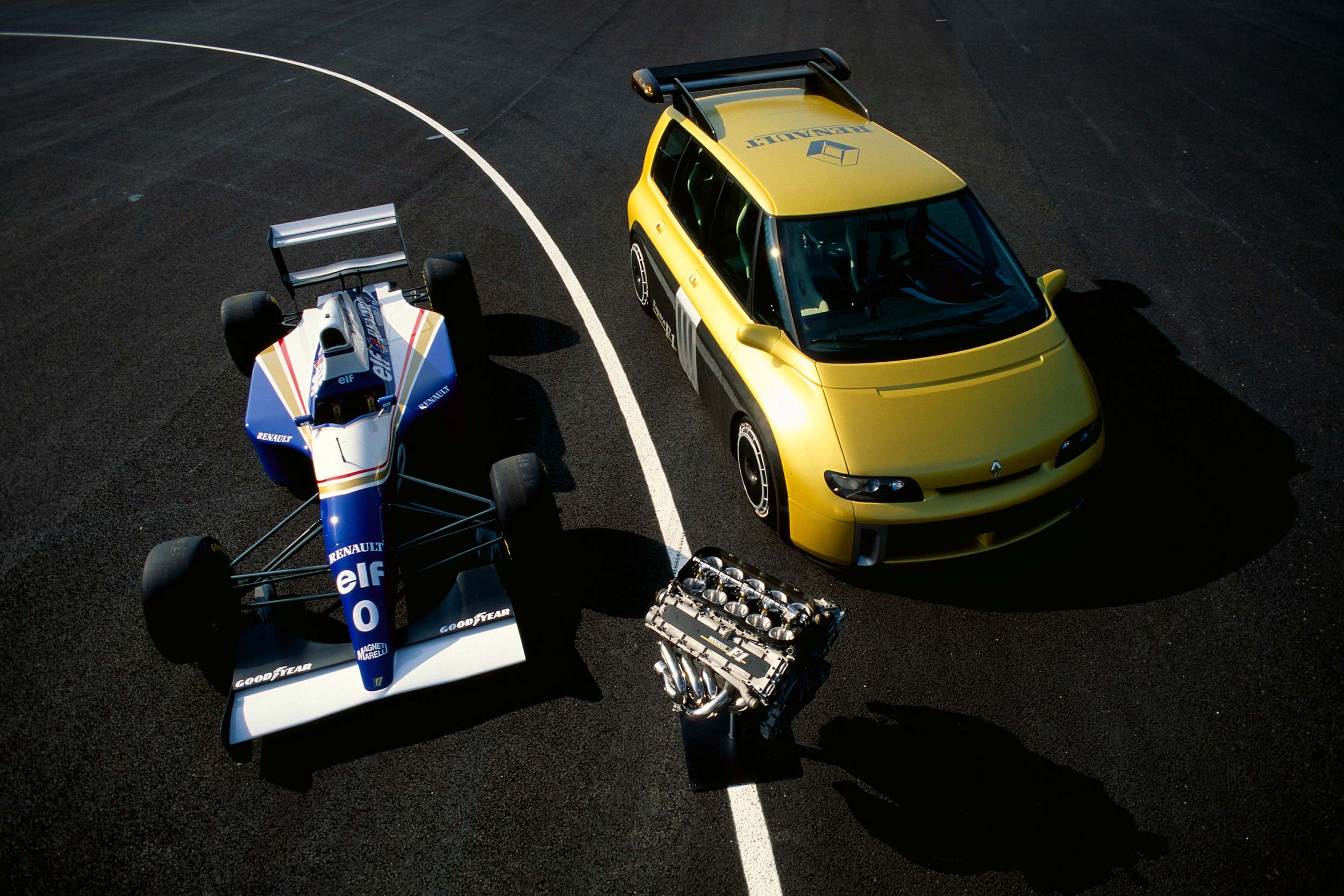 You’d be forgiven for looking at this French bit of buffoonery and wondering, “Sacrebleu! What in the petites pommes de terre am I looking at?” It combines three of the most unpopular things in America and makes them cool: minivans, French cars, and Formula 1 racing (get off your high horse, F1 fans. There’s, like, eight of you and your cars sound like leaf blowers).

Back in 1994, Renault decided to celebrate the tenth birthday of its Espace minivan by stuffing a V-10 engine from its Formula 1 program into 1 . . . um, one. The result would hit 60 mph in under three seconds and rocket all the way to 194 mph. 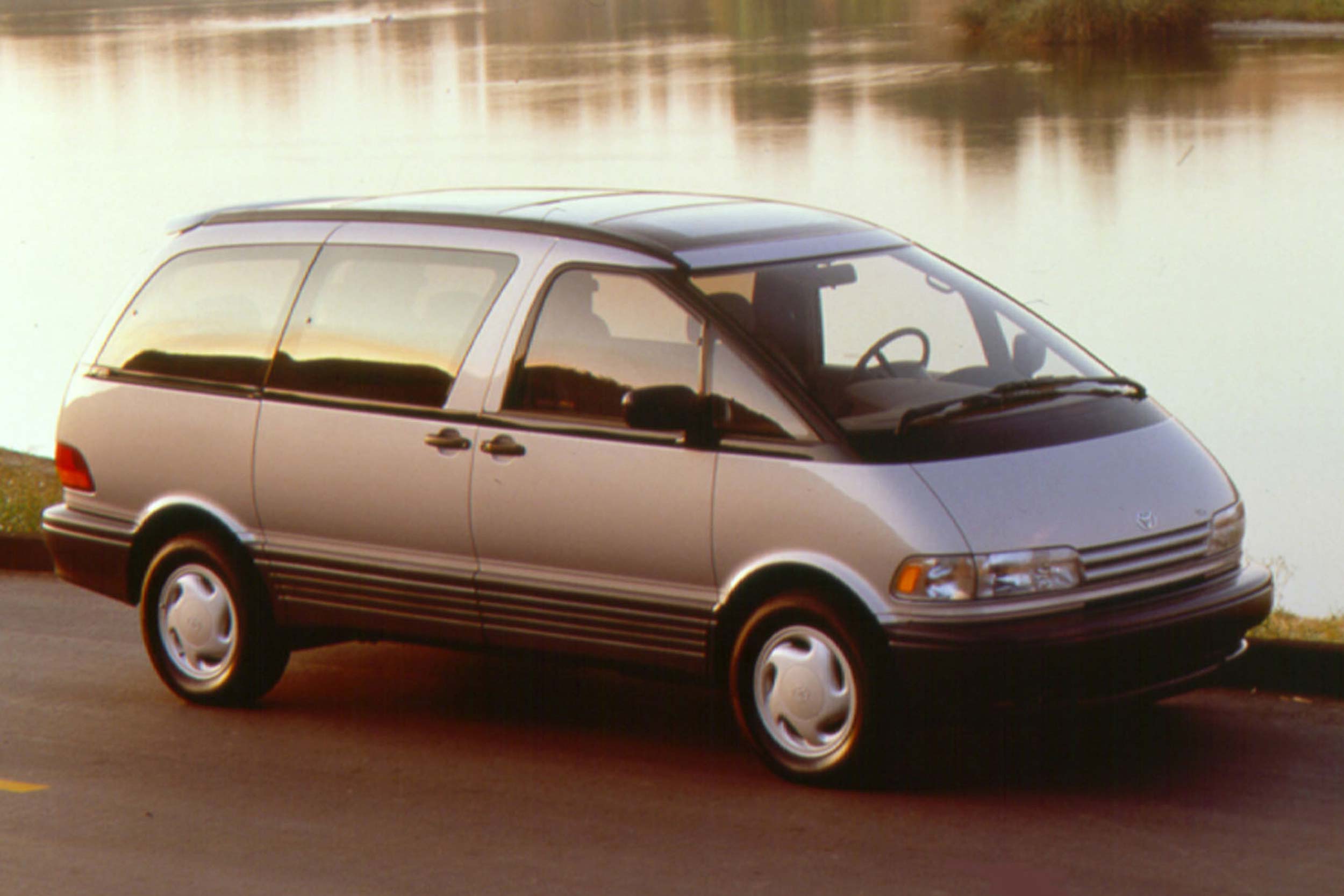 Adding a supercharger and all-wheel drive is a recipe for prefromance that we can get behind, even when the upgrades are installed in something as decidedly unsexy as a shearling-lined pair of winter Crocs (really, Canada?).

The Previa’s midengine design didn’t leave a lot of room for, well, engine, so Toyota engineers added a forward-mounted roots-type supercharger. All dressed up and ready to go, the four-banger churned out an blistering 161 horsepower. That might not seem like much by today’s standards, but it was a full stable of rearing thoroughbreds back in 1954. 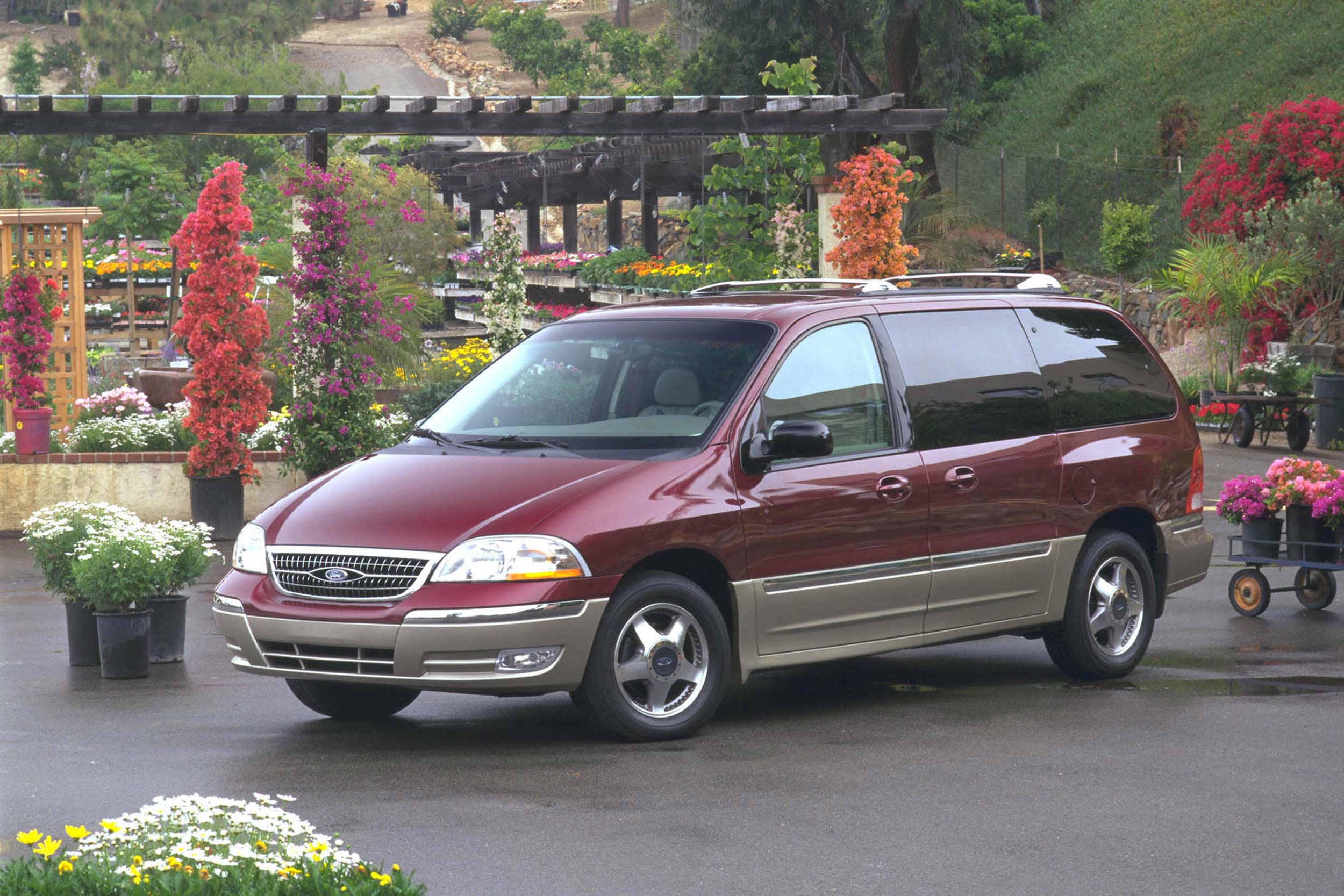 Minivan sales peaked in 2000 with 1.25 million units sold. Buyers loved the undeniable utility and ease of use of the one box design. Every major manufactuer offered an example, and the segment made up 7.2 percent of the total market.

Industry analysts usually blame the demise of the minivan on the rise of the SUV. Though often using more fuel and offering less room that a minivan, American families flocked to the rugged image and feeling of imminent adventure.

Ford ceased minivan prodcution in 2006, and GM followed in 2008. The Hyundai Entourage disappeared in 2009.

In 2017, the entire segment was outsold by just one SUV: the Nissan Rogue. 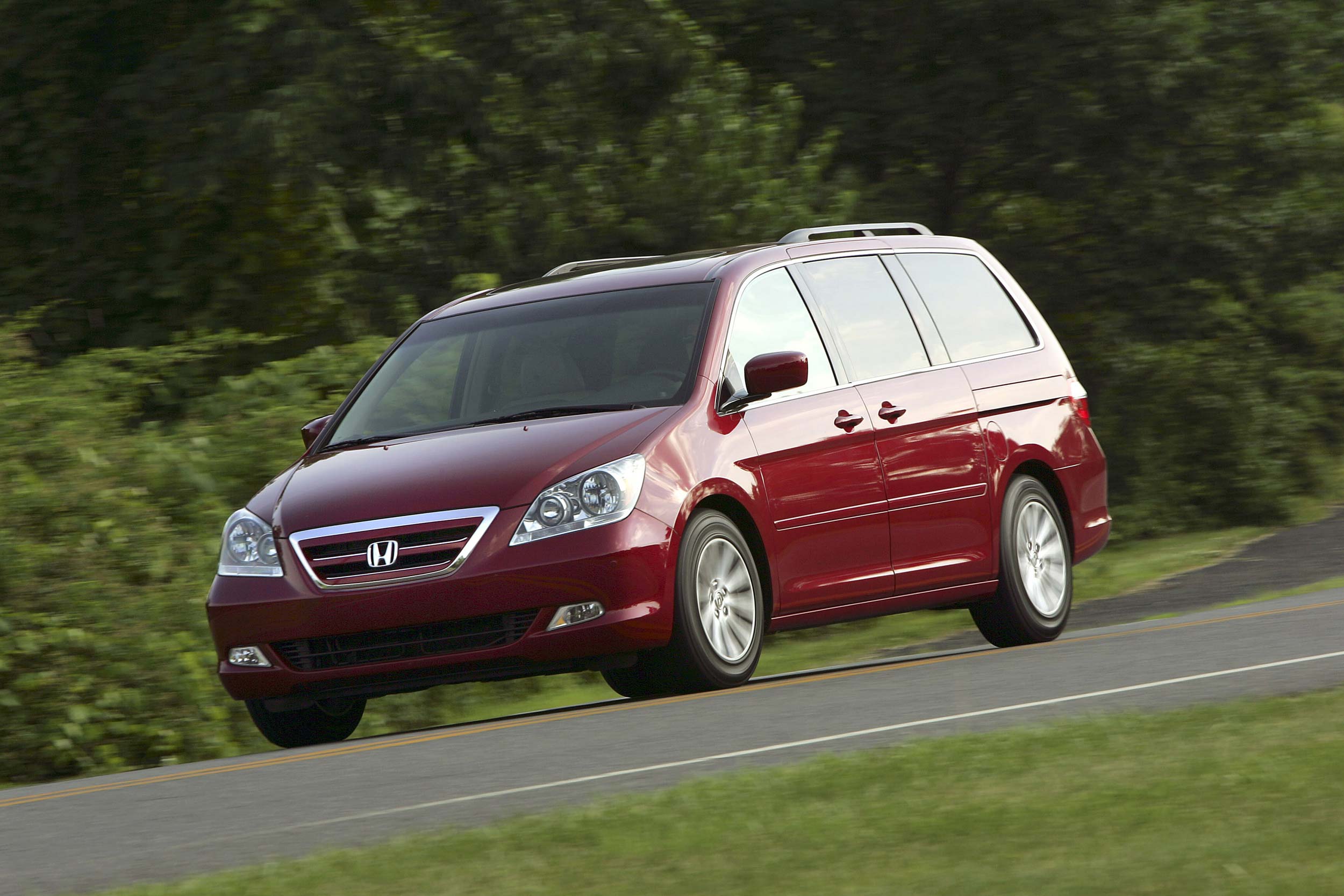 The Honda Odyssey was all-new for 2005 and good enough to contend for Motor Trend’s prestigious Car of the Year award, as well as Consumer Reports top minivan pick for the year. While other manufactuers were leaving the segment in droves, Honda redefined what we now expect from a modern vehicle.

All models had side-curtain airbags and elecronic stability control, upping the segment’s safety game. Windows rolled down in the second row and there were sunshades in the rear doors. The straight second row bench was gone, replaced by a *gasp* 60/40 split folding design.

The 3.5-liter V6 under the hood made 255 horsepower and used active cylinder deactivation for economy.

By 2008, the Odyssey was the best-selling minivan in the U.S. 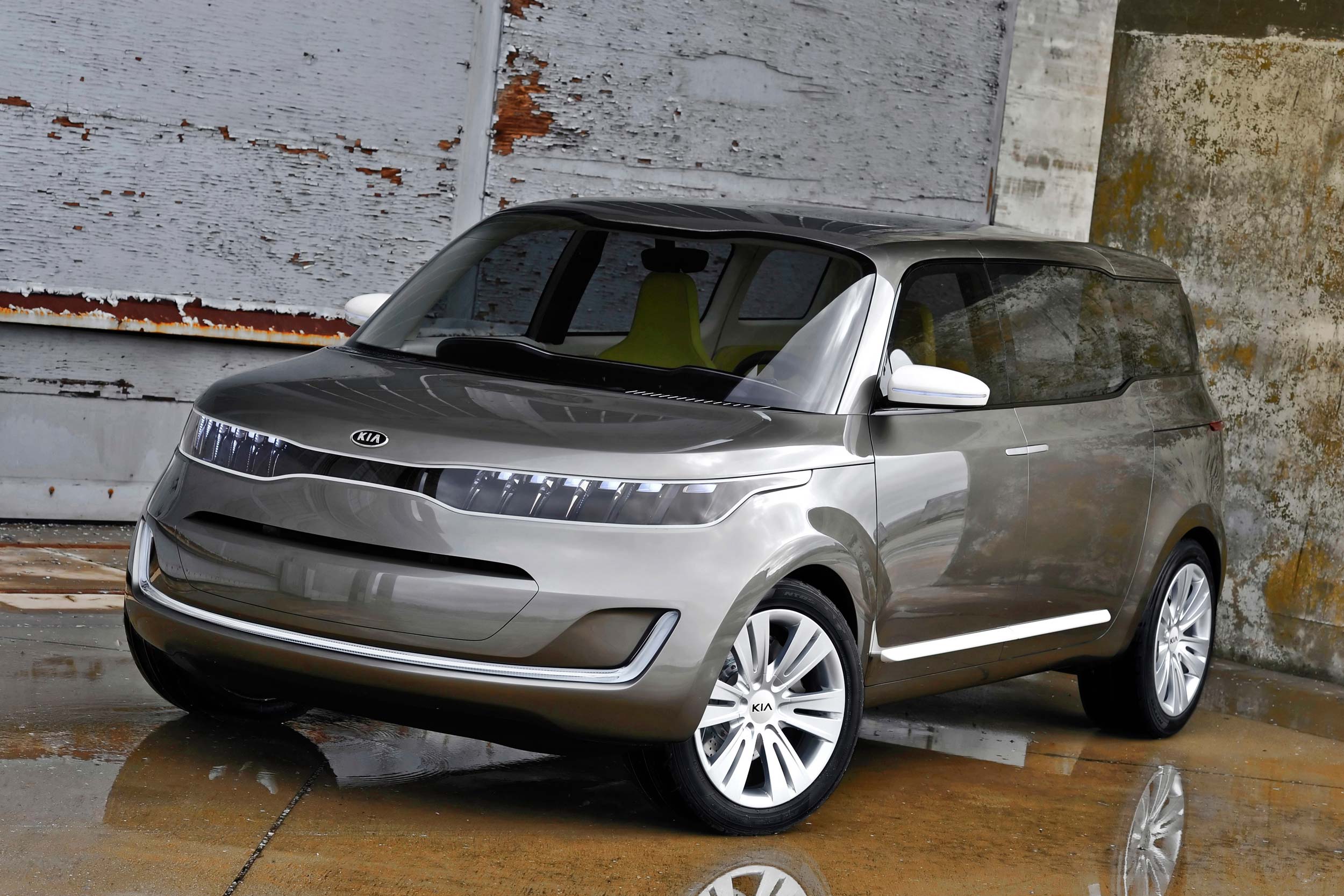 Kia fought back agaisnt the minivan’s “soccer taxi” image with the KV7 concept vehicle in 2011. Debuting at the Detroit Auto Show, the design took a heaping helping of funk from its Soul stablemate, looking utterly unique and downright cool.

Inside, the Kia’s new minivan was aimed at “ringleaders,” people who organize activies and outings for their friends. In essence, the company defined the influencer before the advent of sociel media (Instagram was only founded in October, 2010).

The interior was open and loungey, with integrated Wi-Fi, internet connectivity, a multi-use display interface, and plenty of LED lighting. This was heady stuff in 2011, and Kia completely nailed the future. 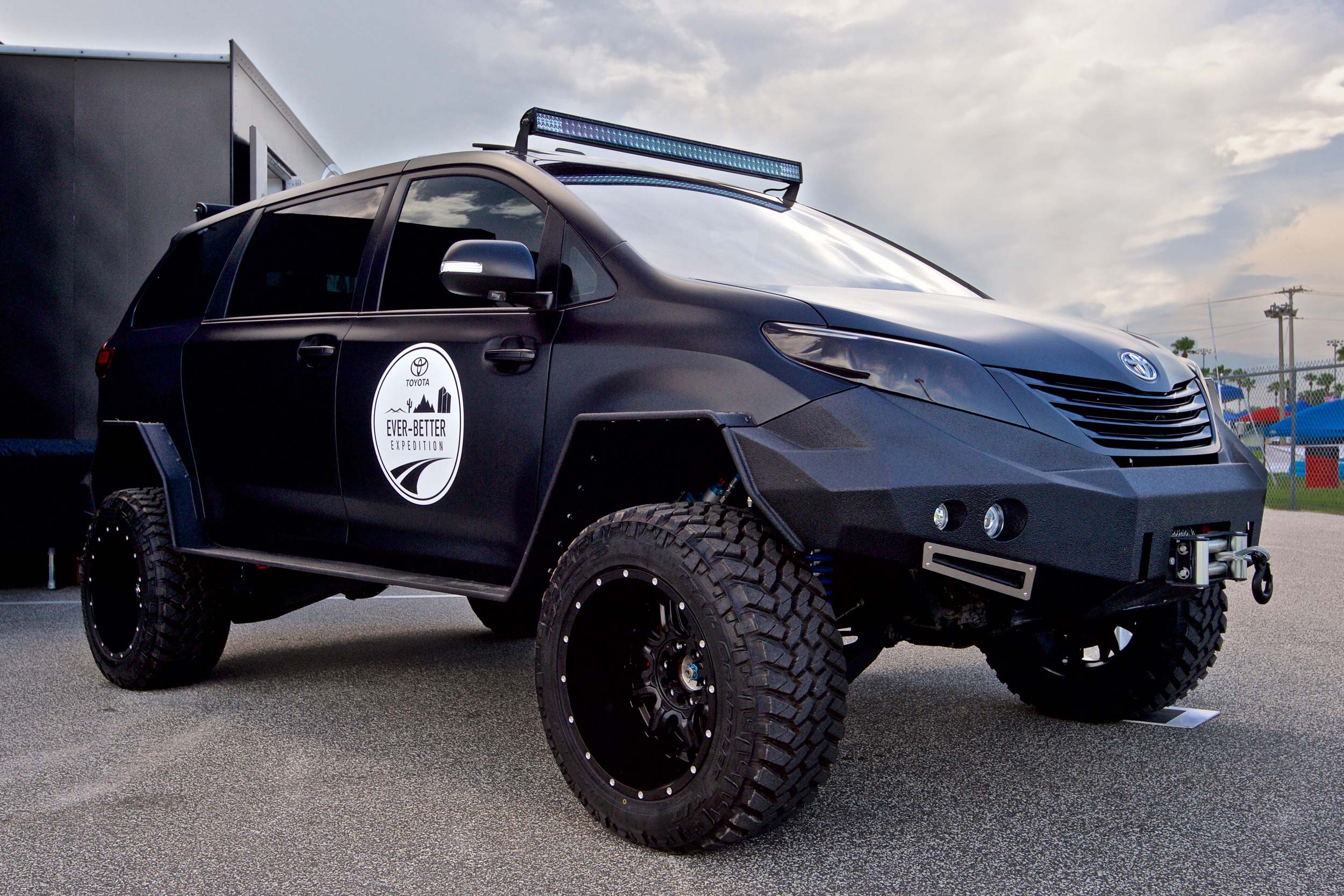 “That’s not a true minivan!” shouts the pedant. “That’s a Toyota Sienna body on a Tacoma pickup chassis!”

“Quiet, you!” say we. “Toyota’s Ultimate Utility Vehicle has all the features of a minivan with the added capability of a truck,” we continue. “It’s made to conquer the heat of Death Valley and the endless winter of Alaska. It’ll climb Pike’s Peak and can still maneuver through Manhattan.”

It actually did most of that, too. The vehicle was used as part of Toyota’s “Ever Better” iniative, a program to help Toyota team members gather new insights into the vehices, better understand performance, and connect with customers.

The vehicle was showcased at SEMA 2015, and we’re still talking about it. 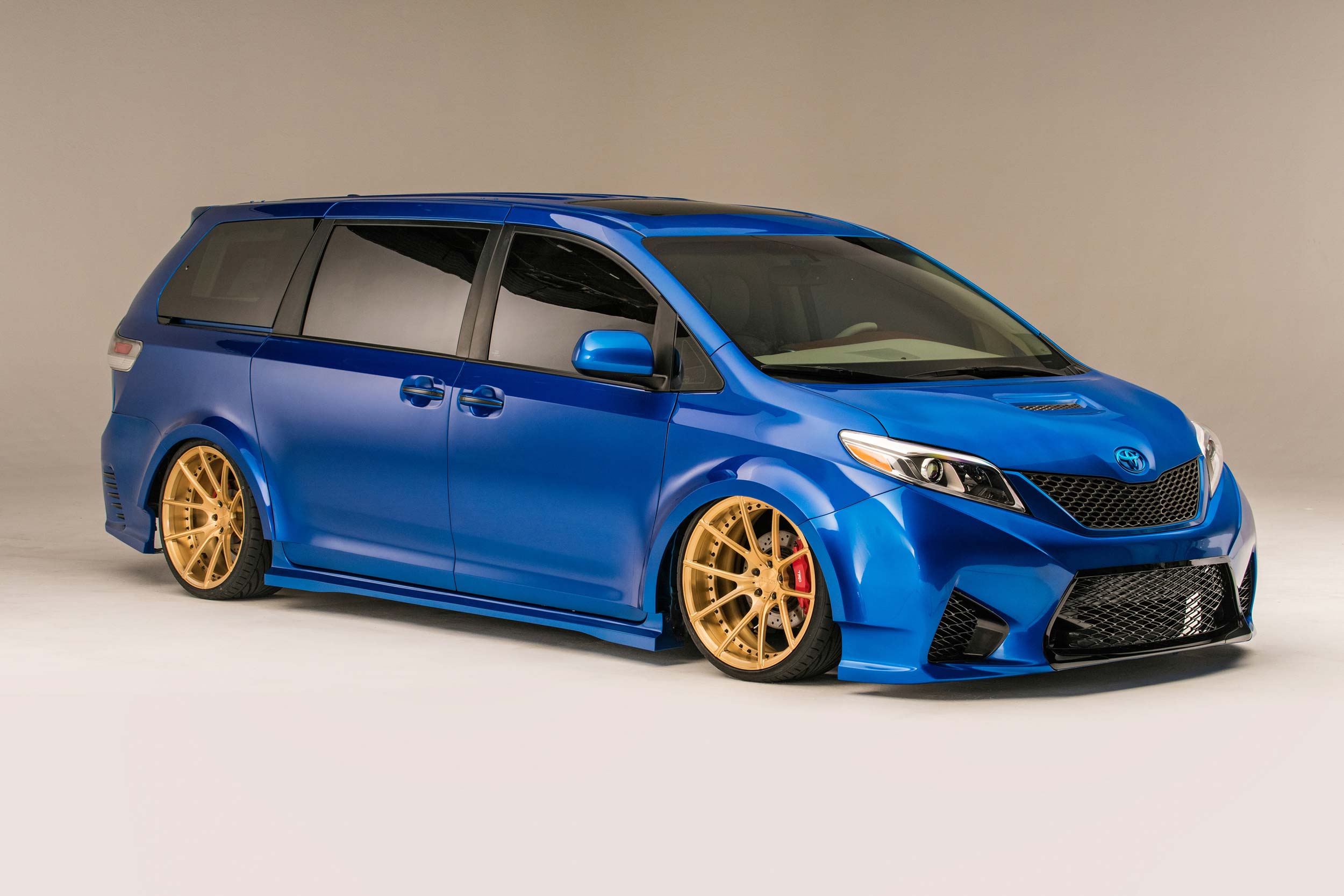 Not to be outdone by themselves, for SEMA 2016 Toyota gave a Sienna to Real Time Automotive’s hot rod builder, Rick Leos. A wide body was added, performance wheels, a splitter, rear diffuser, dual exhaust, and acres of carbon fiber.

The interior was extremed, as well, with a home theatre system, custom upholstery, a refrigerator, Wi-Fi connectivity, and Bluetooth speakers.

The whole vehicle is controlled by an iPad, for ultimate Millennial connecivity. 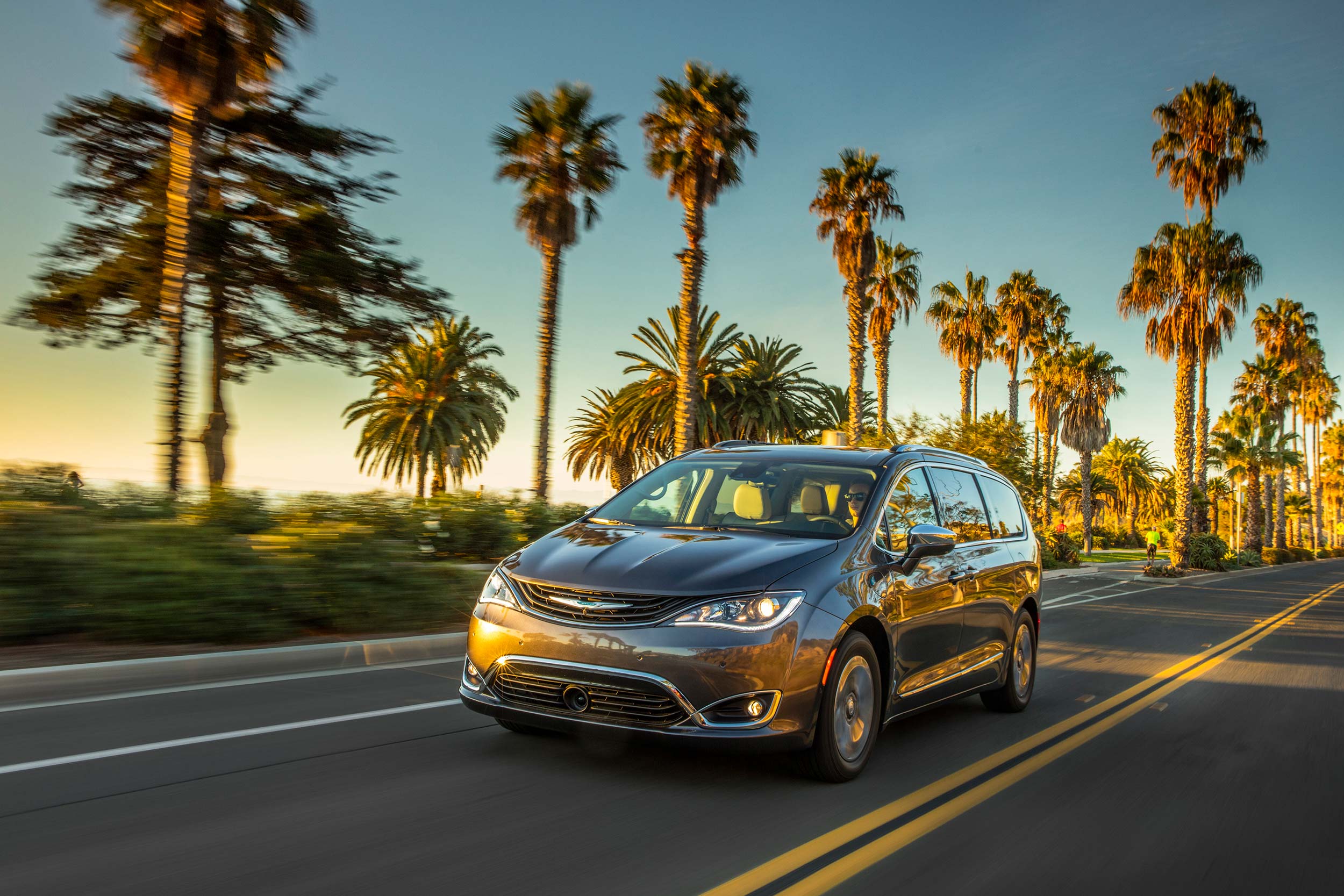 Fast forward to the year 2018 and Chrysler (Fiat-Chrysler) is still king of the minivan game. The company has many excellent rivals, but still manages to outsell them all. As of September, the Chrysler Pacifica and Dodge Grand Caravan control two-thirds of the American market.

The Pacifica has another neat trick up its sleeve: its the first and only plug-in hybrid minivan on the market. There’s a full electric drive mode that allows families to take advantage of cheap electric power for personal transportation, and overall range is exended to 566 miles. 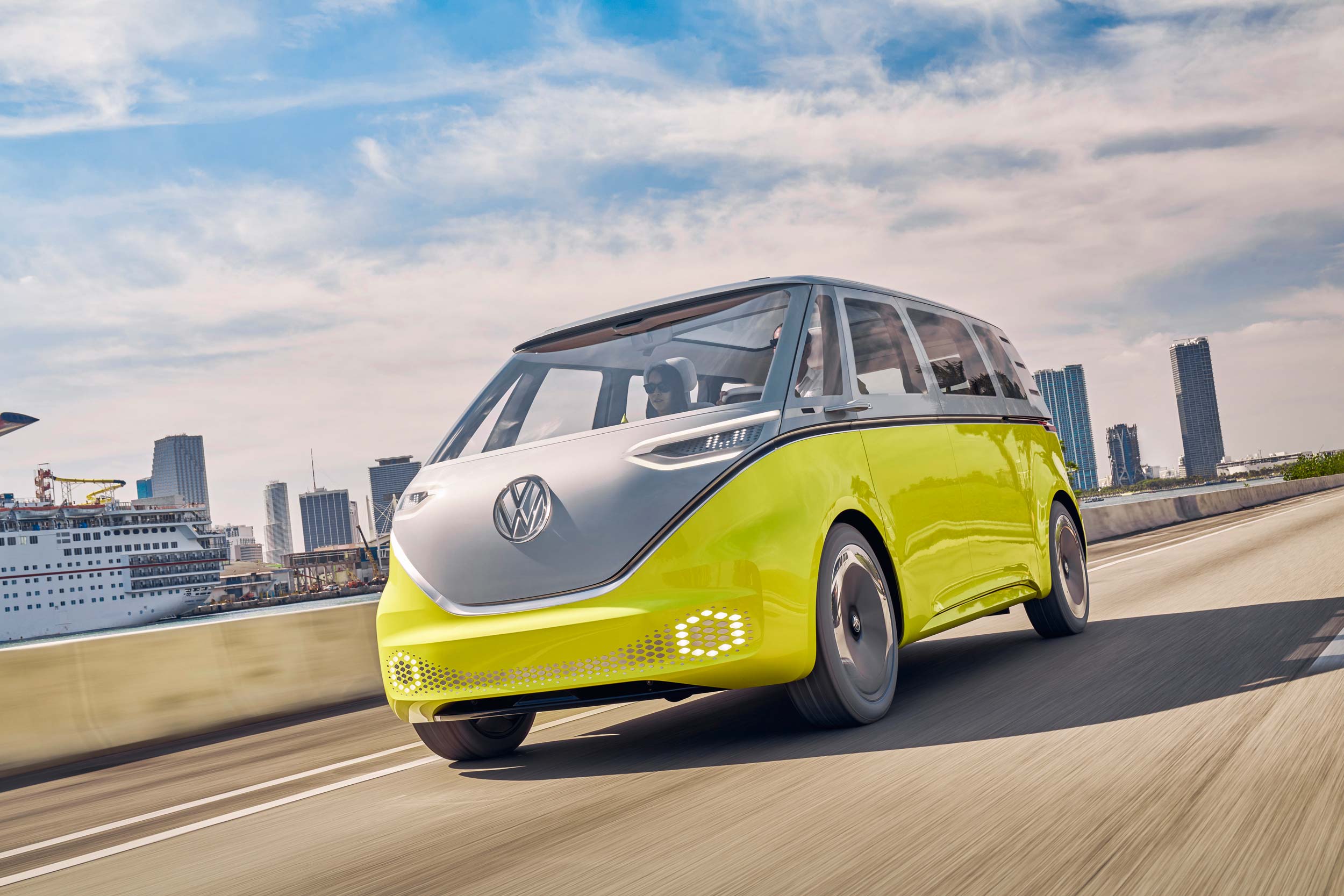 The Buzz was desinged from a clean sheet as an electric vehicle and makes the most of its arcitecture, with wheels far out to the corners and short overhangs. The result is a larger and more versatile interior.

Volkswagen announced in October that the company will be moving ahead with its I.D. program. Designs are said to be virtually complete and contracts with battery suppliers have been signed. 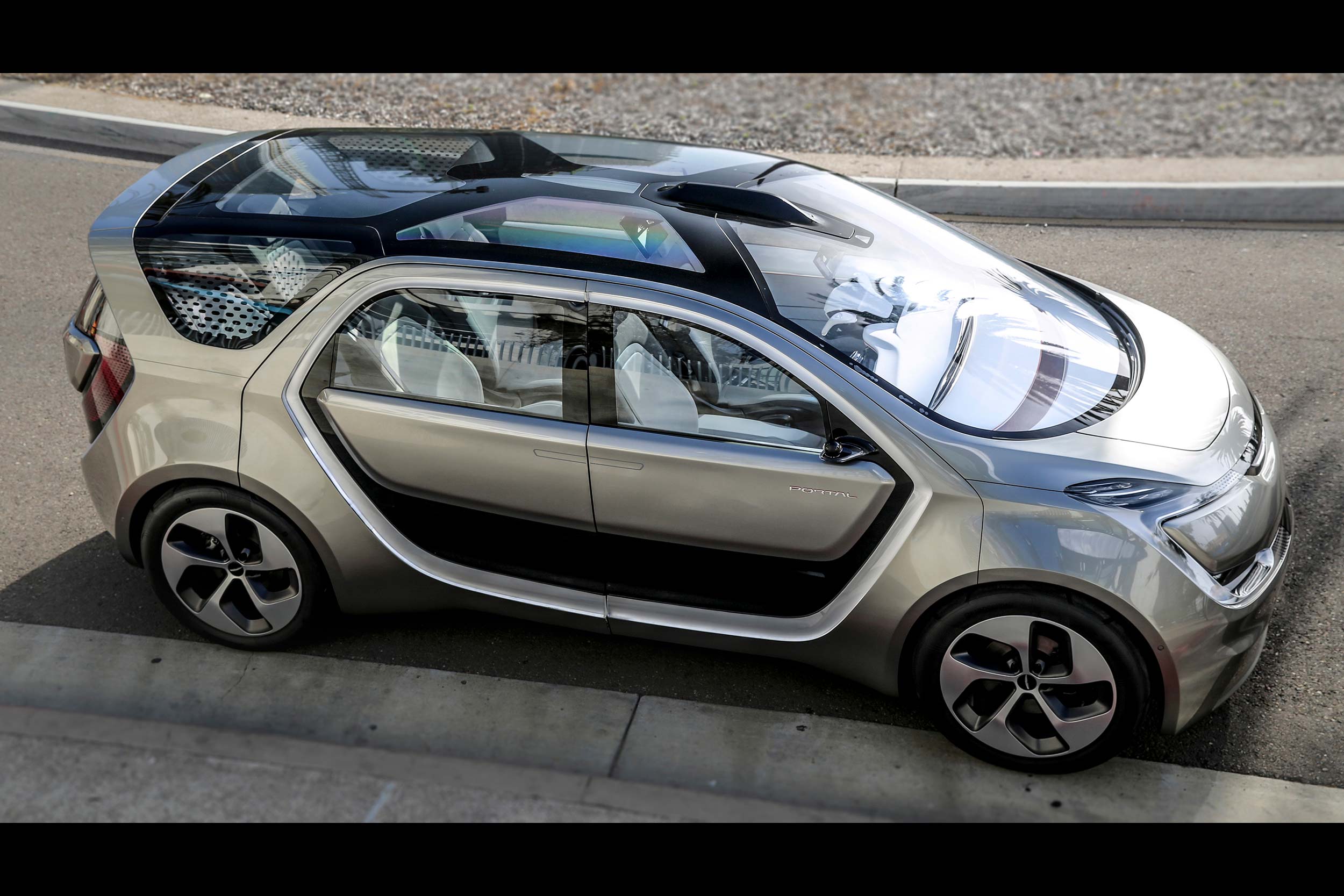 Perhaps seeking to change the dowdy reputation of the family truckster, Chrysler has invented a new descriptive language for their Portal concept. Rather than being a visually stunning minivan designed for active Millennial families on the go, the Portal is described as a “third space,” and “an alternative environment between work and home.”

Whatever you call it, it’s all-electric and expected to go 250 miles on a single charge. There are color-changing luminescent accents and trim on the exterior that can be animated, if desired. It will be capable of semi-autonomous operation. There’s facial recognition software installed so the infotainment system knows who the driver is and will acess favorite programming.

Even better, the runmor mill indicates that it is actually going into production. It’s expected to arrive in 2020, taking the place of the 300 sedan.