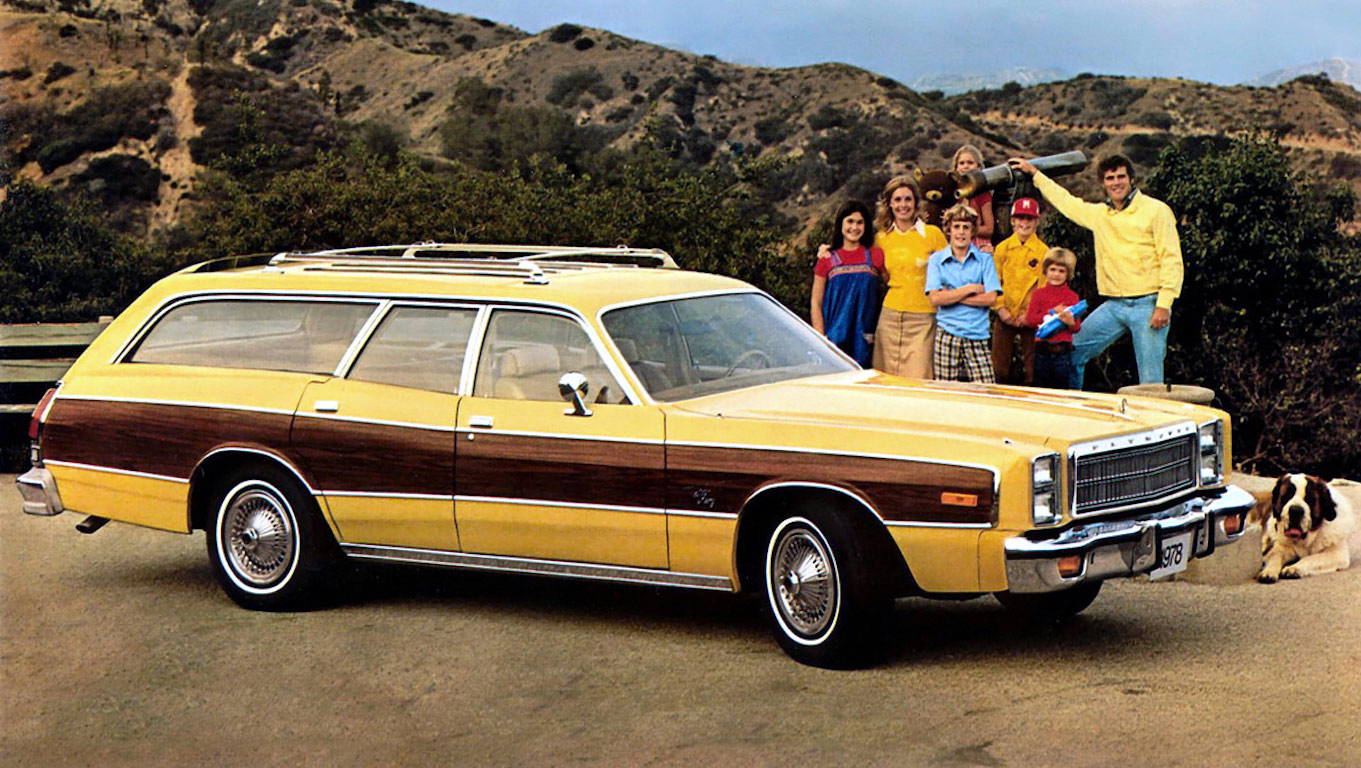 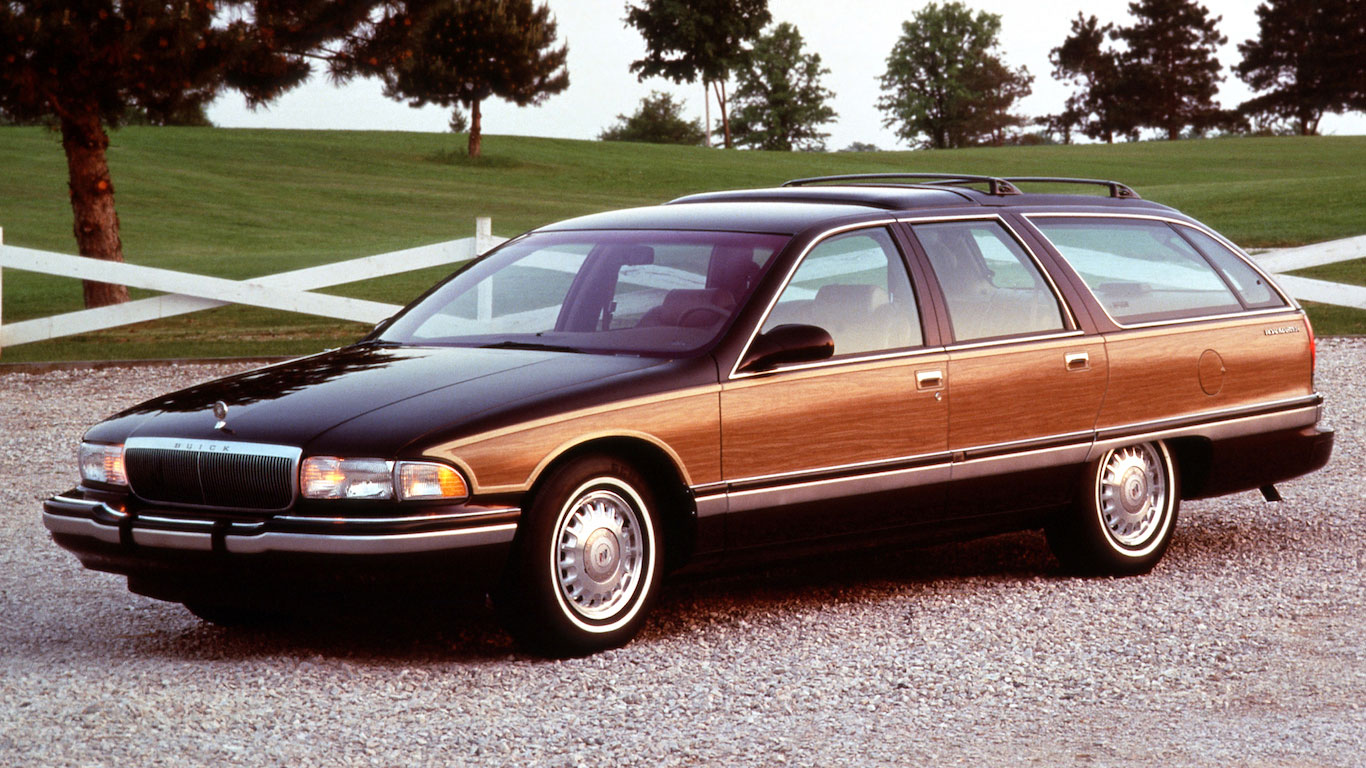 As an icon of suburban family life, the wood-sided station wagon occupied American driveways for more than six decades. This is the story of the rise and fall of the woodie. 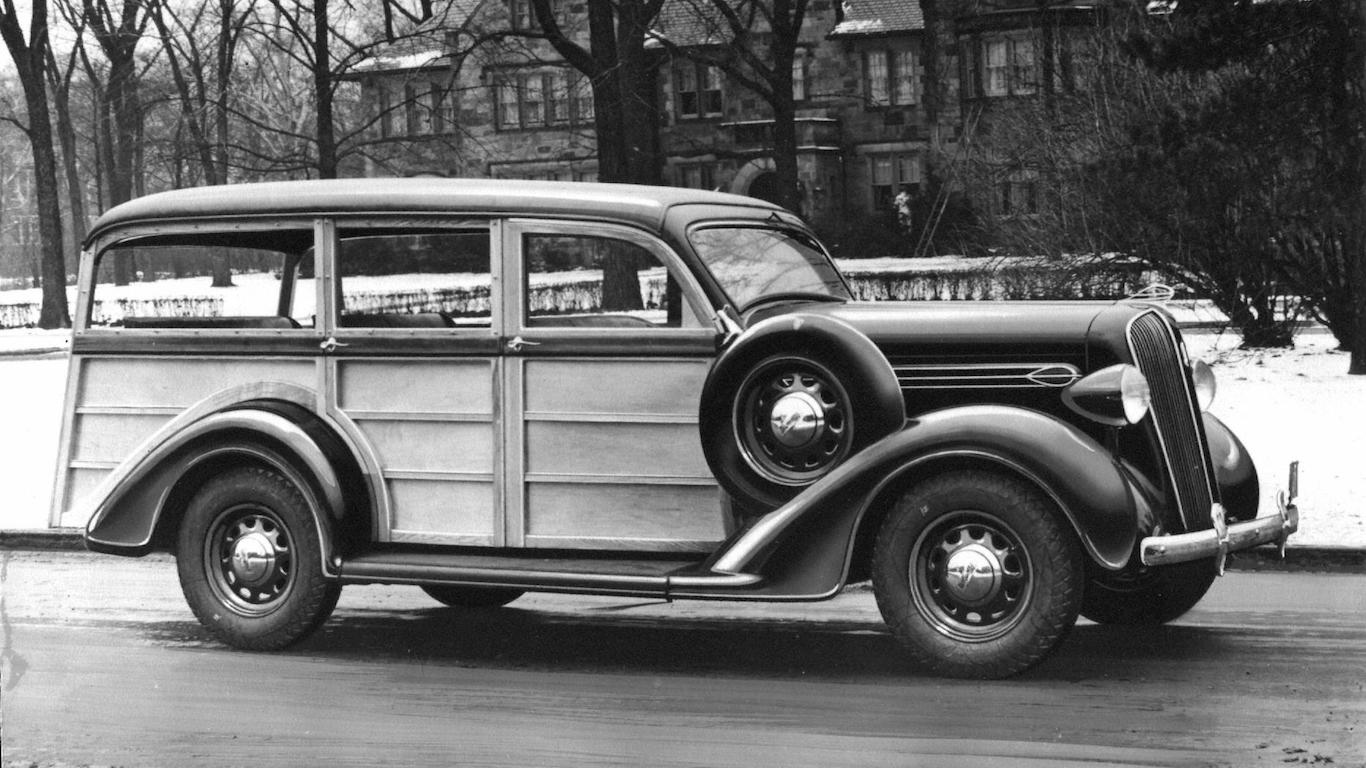 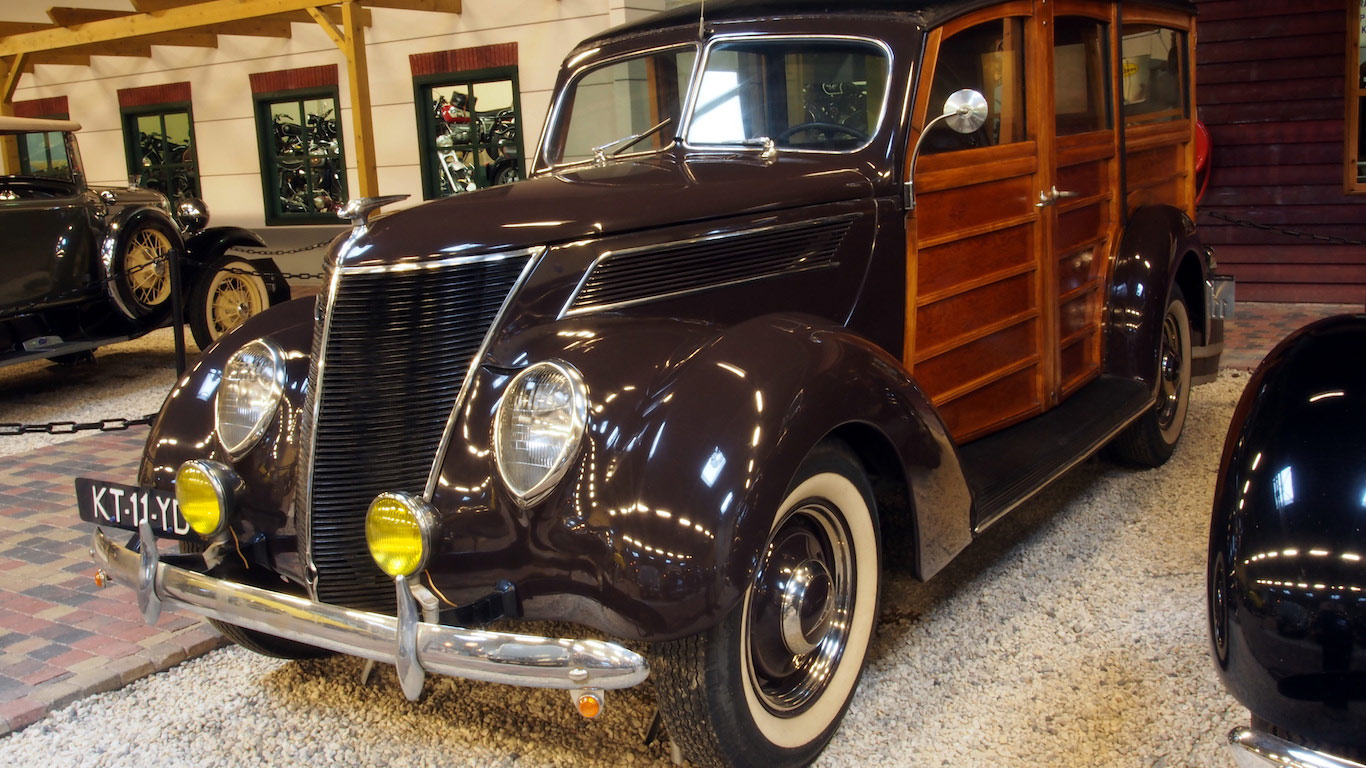 With over 120,000 examples built between 1932 and 1948, early Ford woodie wagons were a relatively common sight on the roads of America. Three rows of seating offered the potential for up to eight passengers, with a split tailgate used as well. DeLuxe models gained additional chrome trim, fancier woodgrain for the dashboard, plus extra tail lights over the Standard version. A choice of V8 engines was offered, in either 136-cubic inch (2.2-litre) or 221ci (3.6-litre) displacements. 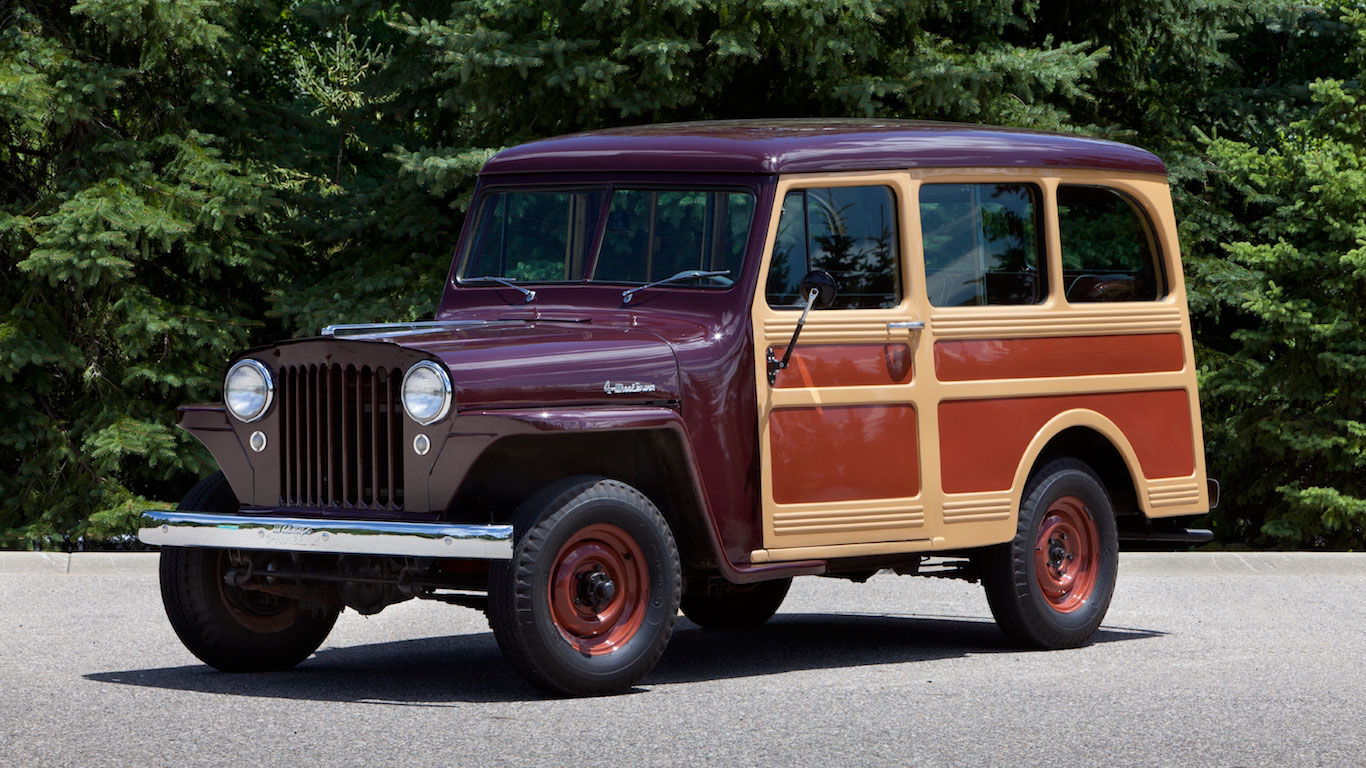 Arguably the first-ever mass production SUV when introduced in 1946, the Willys Jeep Station Wagon gave buyers off-road ability and a spacious interior not seen before. Unlike real woodies, the Jeep used an all-steel body designed to replicate timber-clad station wagons. This was done for reasons of strength, safety, and to lower the cost of production. The year 1949 saw the introduction of a 4×4 version, with some 300,000 examples sold before the Station Wagon was replaced in 1965. 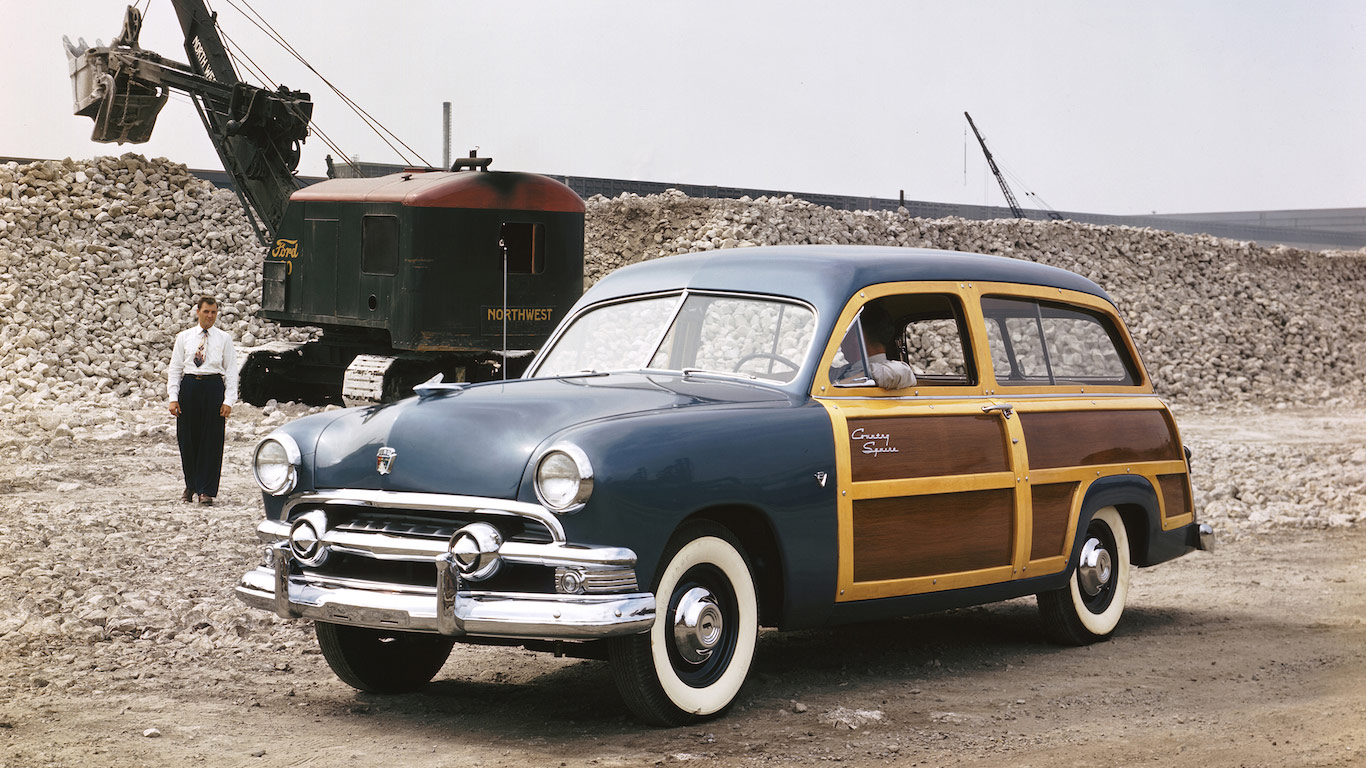 Added to the full-size Ford model range in 1950, the Country Squire would be the embodiment of woodie wagons for four decades. The first versions were simple two-door station wagons, and the only Country Squire versions to feature genuine wood trim attached to a steel body. All subsequent generations would make use of woodgrain trim to lower cost and make maintenance easier. A 226-cubic inch (3.7-litre) inline-six engine was standard, with Ford’s 239-cu in (3.9-litre) Flathead V8 optional. 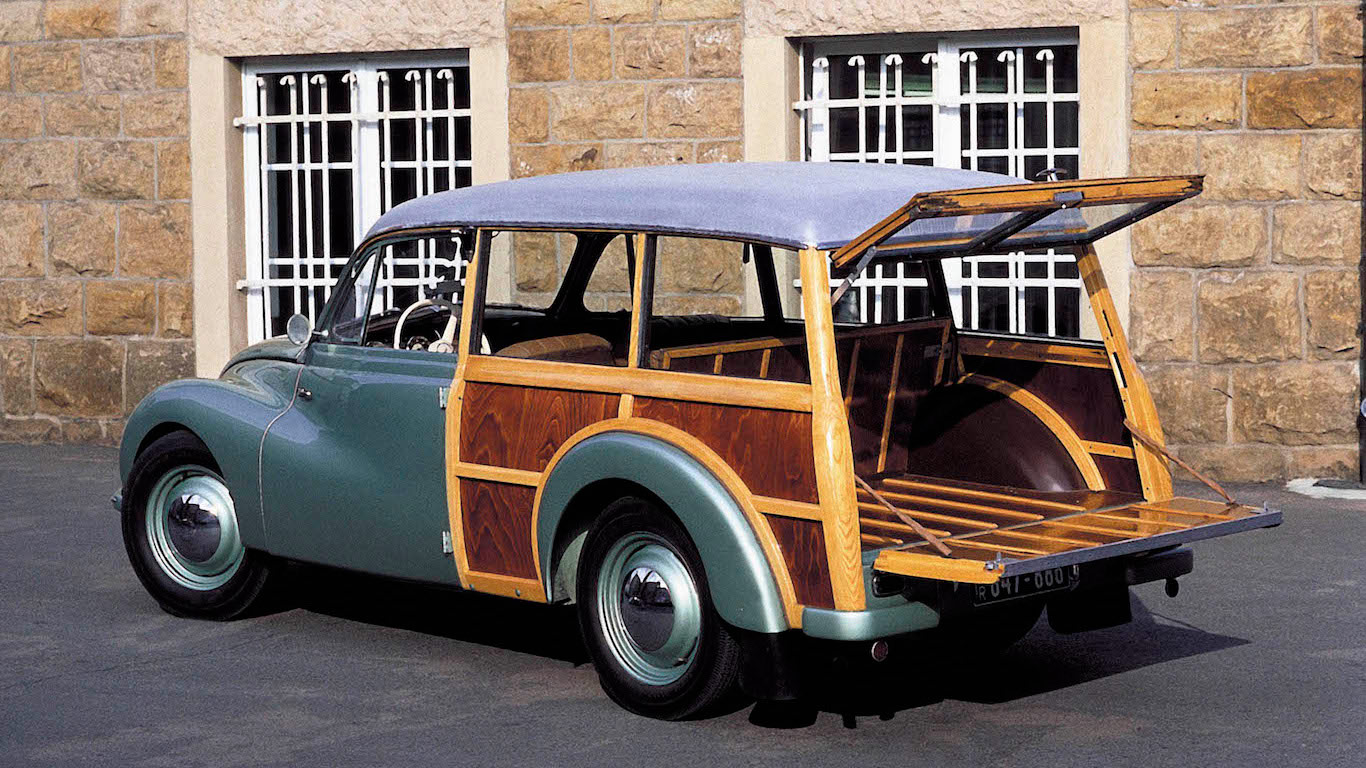 Although the idea of a woodie may traditionally be an American concept, this didn’t stop European manufacturers from using the timber frame idea. Built by Auto Union – the predecessor to today’s Audi brand – the DKW Meisterklasse was a range of compact front-wheel-drive cars introduced in 1951. Alongside the traditional saloon, DKW also offered a three-door ‘Universal Estate’ that made use of wood both inside and out for the rear bodywork. The woodie DKW existed for less than three years, with an all-steel replacement introduced in 1953. 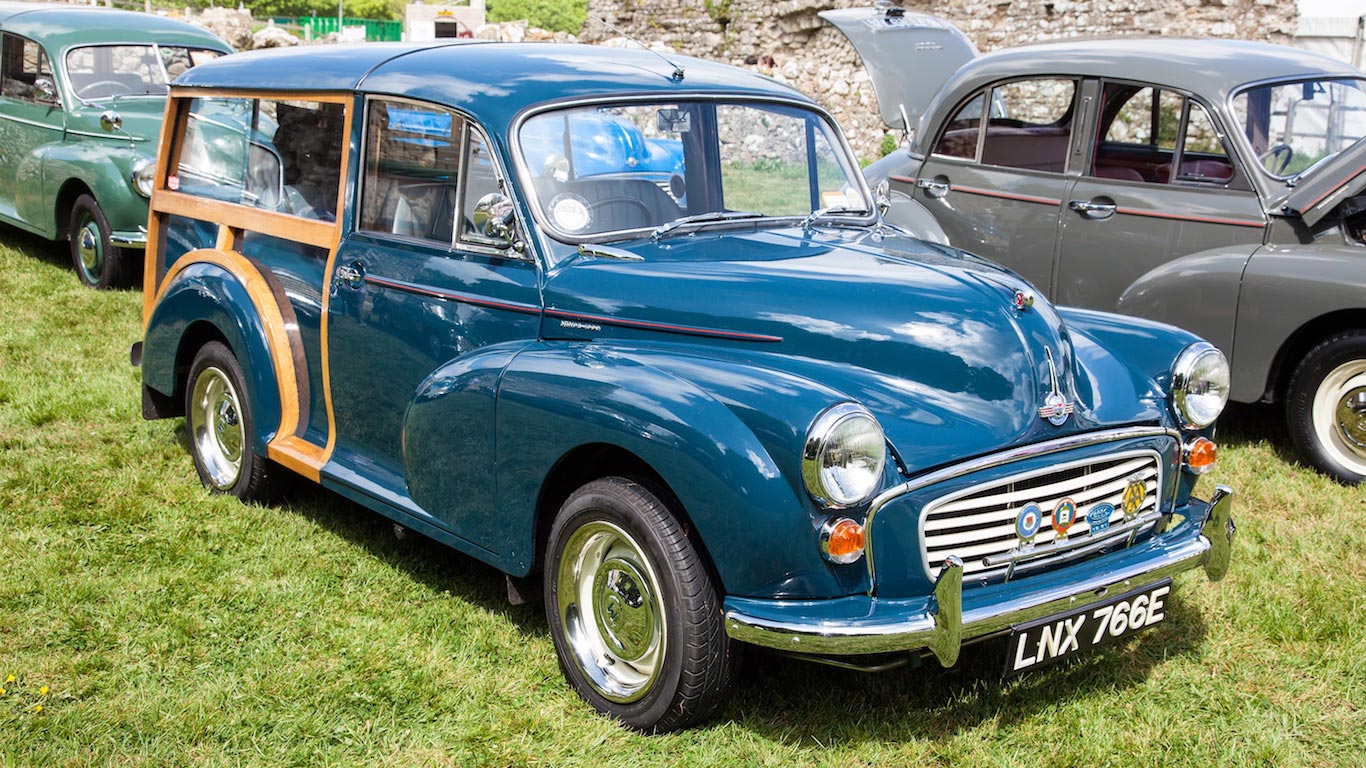 Over 1.5 million Morris Minors were produced between 1948 and 1972, with the timber-framed Traveller available from 1952 as part of the Series II generation. The Traveller made use of an ash frame for structural integrity, and was varnished rather than painted. A pair of side-hinged doors were also added to boost practicality. The Traveller was part-built on the regular Morris production line in Oxford, before being transferred to the MG factory for the addition of the timber rear frame. 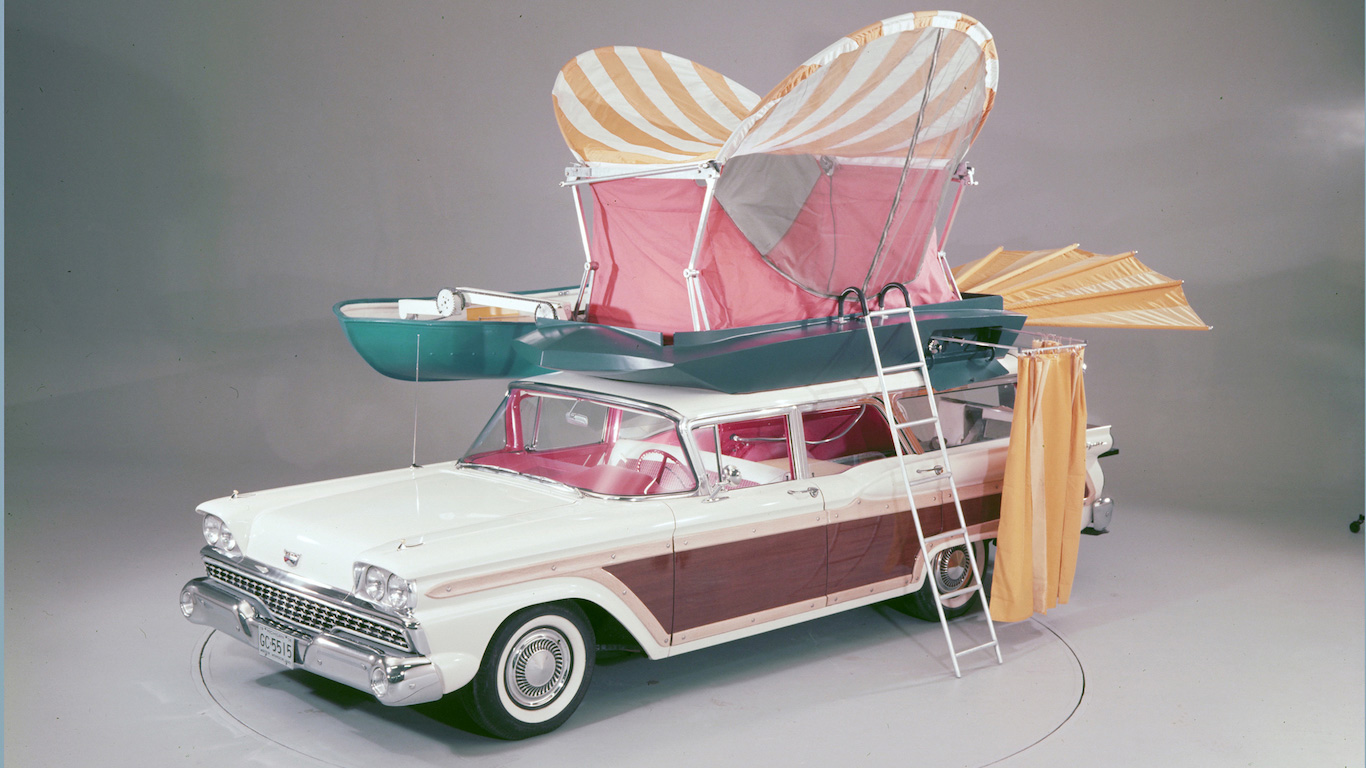 With woodgrain replacing genuine timber, the woodie moved away from being a coachbuilt creation into a lifestyle wagon. This particular Ford Country Squire was used to display a range of ‘push button’ accessories including a roof-mounted boat with a tent beneath it. An electric fridge was mounted in the rear, whilst a shower attachment made this the ultimate outdoor estate. Like the Buick Roadmaster, Ford had ditched genuine wood trim for the Country Squire in 1953, with woodgrain trim used from then on.

With the market moving away from the giant full-size station wagons, Plymouth had downsized the Fury Sport to the smaller B-Body platform. A key party trick for the Fury Sport Suburban was a three-way tailgate. Not only could the rear window be retracted, the door itself could either hinge sideways, or drop downwards. Being the late 1970s, options like a CB Radio or eight-track stereo were on offer, with shag carpeting and vinyl seats offered as standard, along with the woodgrain trim. 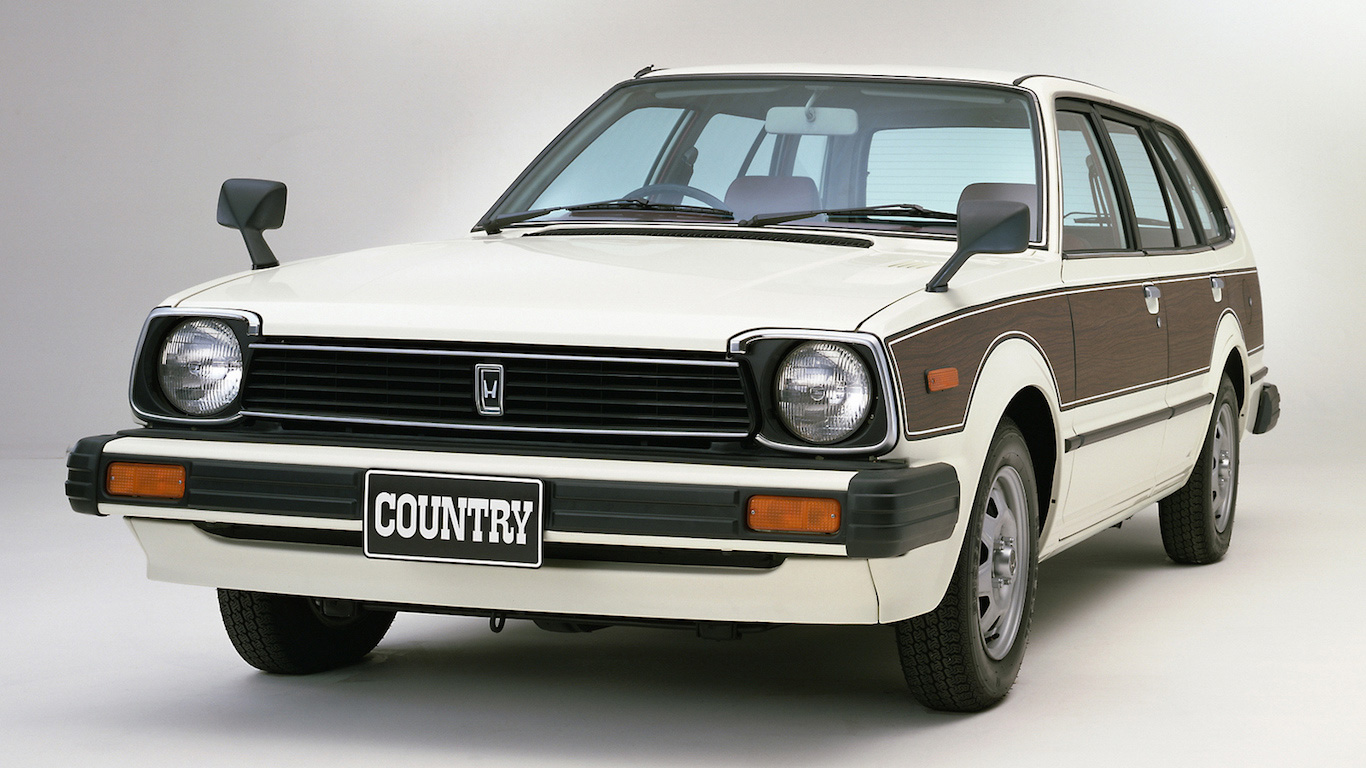 Despite the declining popularity of the woodie wagon, Honda sensed the need to launch a vinyl woodgrain-trimmed version of the second-generation Civic. With front-wheel drive and a small 1.5-litre four-cylinder engine, the Civic Country was a world away from the full-size domestic American offerings. However, it would start a trend for compact woodies that homegrown manufacturers would follow. 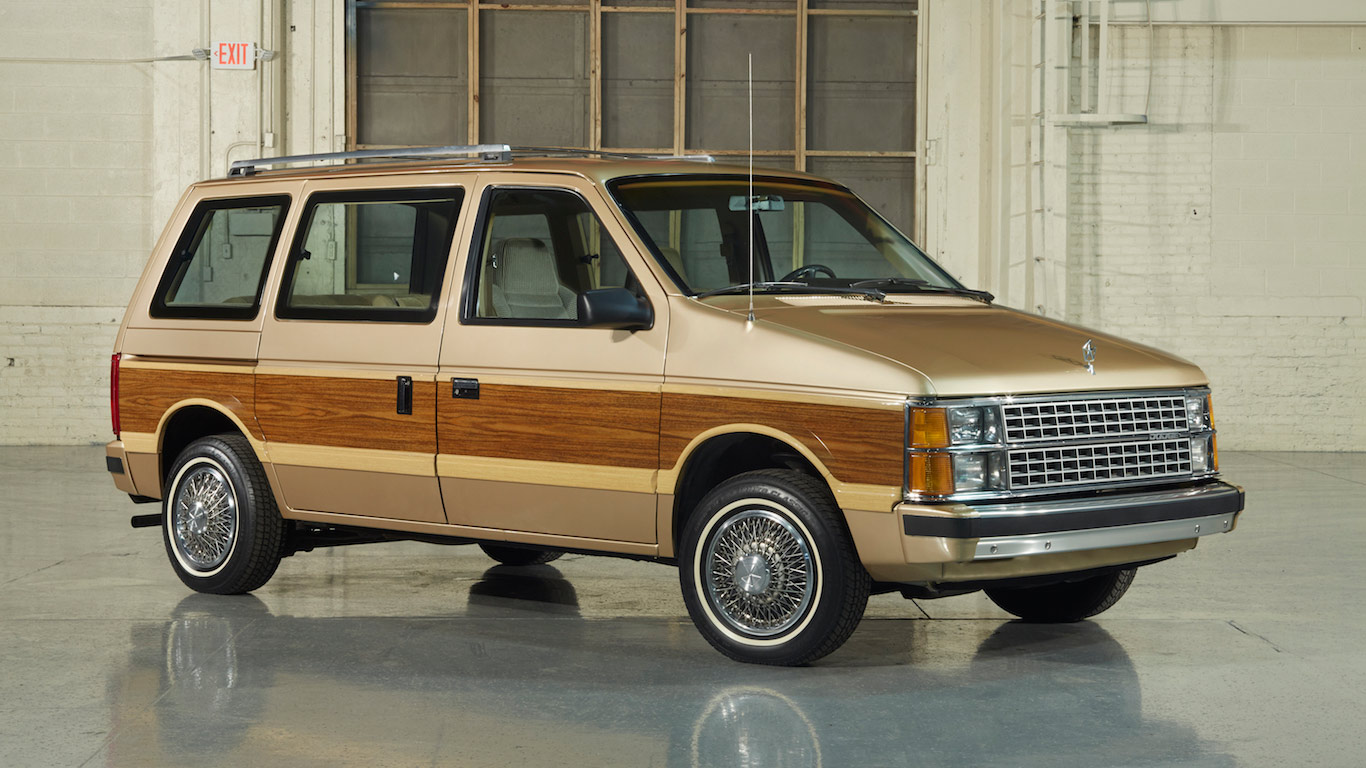 This was the beginning of the end for the station wagon as a part of American family life; suburban dreams would shortly be all about the minivan. Chrysler minivans were designed to fit inside a standard garage, but also – just like the classic full-size wagons – to be able to carry a 4’ x 8’ sheet of plywood. Keen to help buyers maintain the link with the ideas of a classic woodie, higher-specification versions of the Caravan featured vinyl woodgrain exterior panelling. 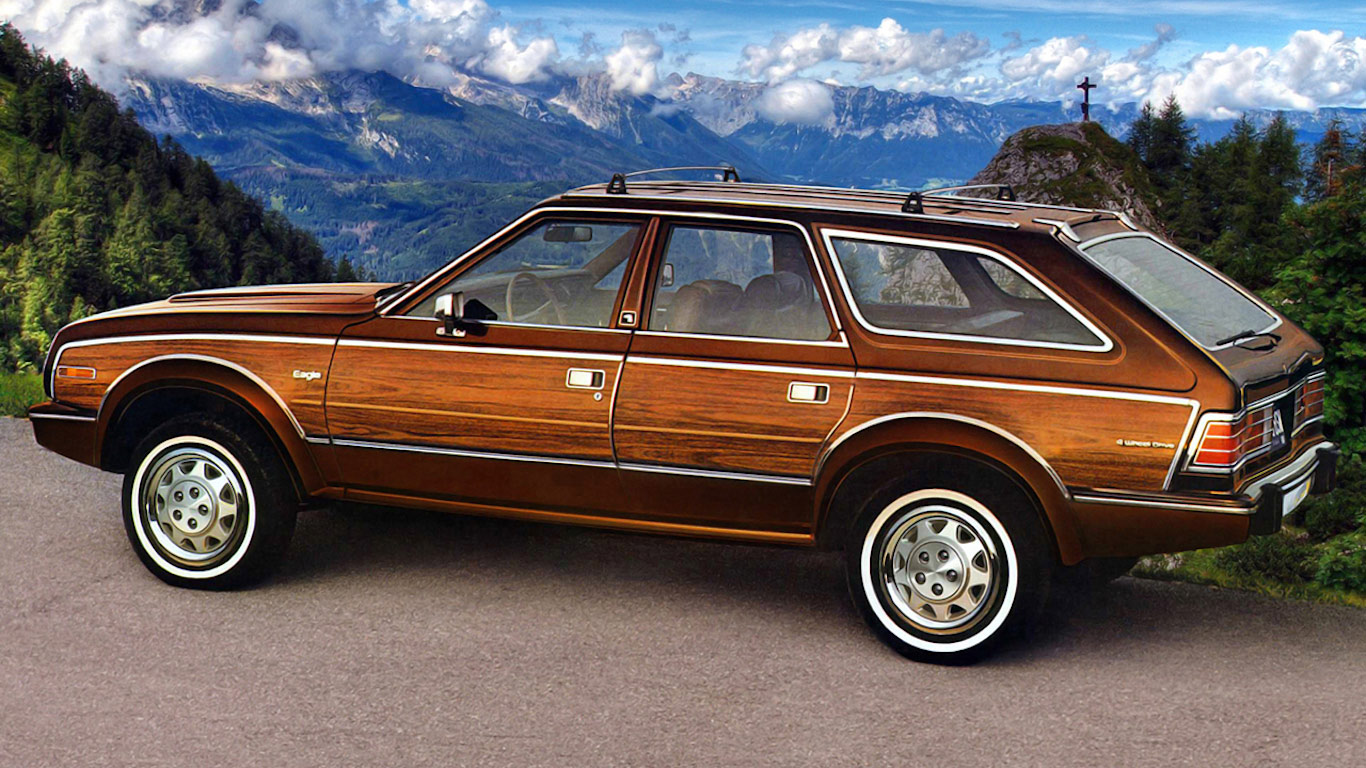 The crossover might seem like a modern creation, but AMC offered a range of different bodies mounted on a four-wheel-drive chassis as early as 1979. From a two-door coupe to a hatchback and sedan, the Eagle range also included a wagon with the option of woodgrain panels. Today, the Eagle has a degree of cult collectability, representing the crossover concept decades before it became commonplace. 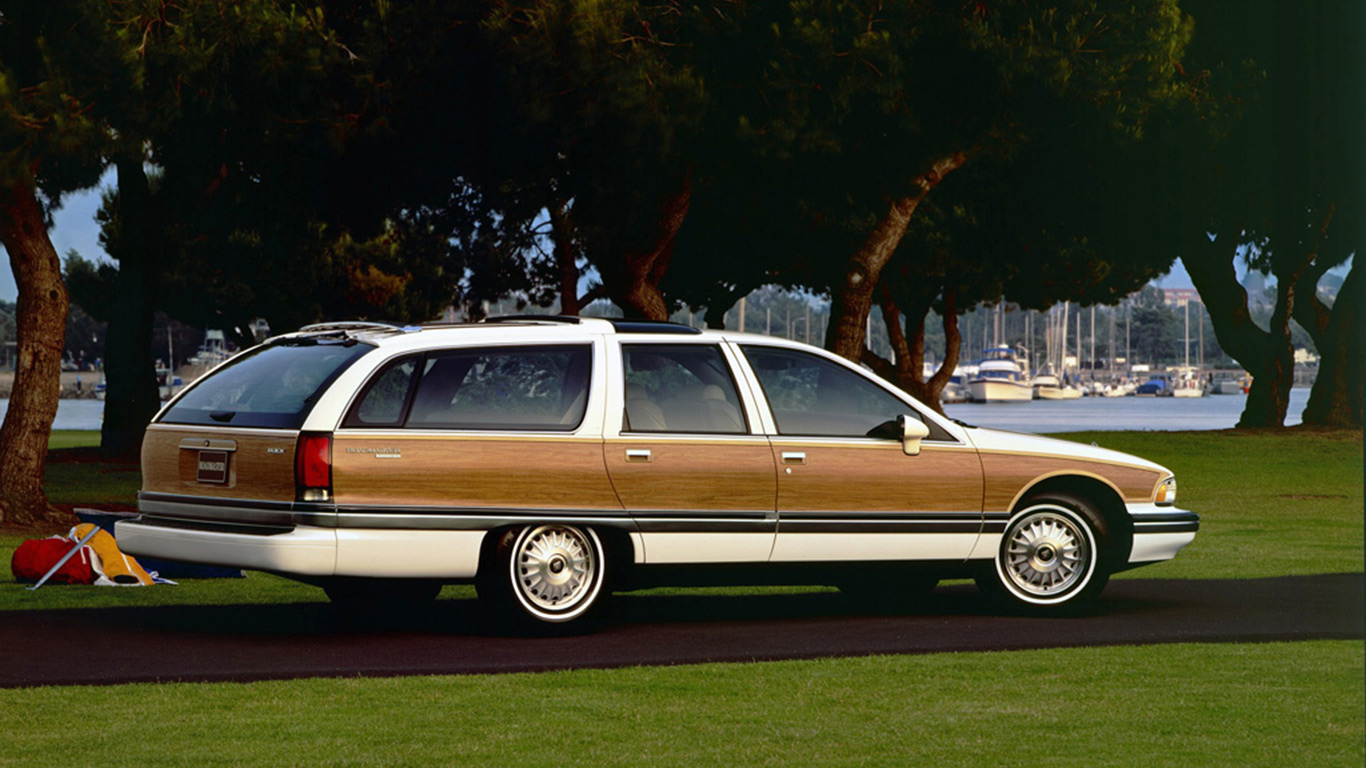 It had been the last woodie to use genuine timber components, so it seems only fitting that the very last American wood-sided wagon was the Buick Roadmaster. Reintroduced in 1991, the Roadmaster Estate was truly old-school, with a full-size rear-wheel-drive chassis and all the imitation woodgrain you could want. The optional third row of seats was still there, as was the 5.7-litre V8 engine, but the reality was that the world had moved on. MPVs and SUVs were now the choice for cross-country family road trips, consigning the woodie to the history books.