... and London cabbies have a spin too, in the cab that could be a game-changer 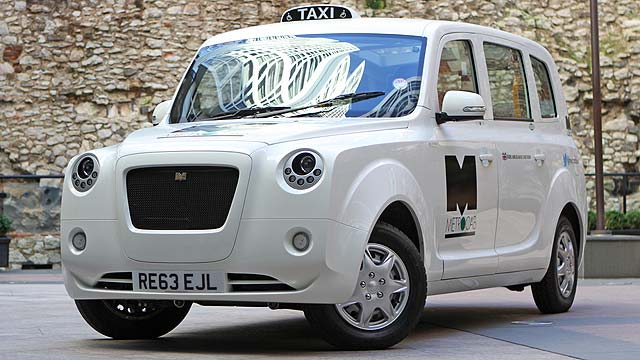 London Mayor Boris Johnson has become among the first in the world to test-drive the new Metrocab London taxi, prior to the trialling of production versions on London’s roads this summer.

Boris joined London taxi drivers at Metrocab’s Surrey test facility to take a spin in the new London cab – and he immediately dubbed it “a masterpiece of British engineering.

“I have just driven it and it’s totally silent,” he added. “It’s the Rolls-Royce of taxis and it will do 100mph.”

That latter point is thanks to the Metrocab’s range extender technology, which pairs a 1.0-litre petrol engine with an electric drivetrain to make it more than three times more fuel efficient than today’s London taxis.

This will save cabbies up to £40 a day in fuel.

Average economy of more than 75mpg also delivers sub-50g/km CO2, and it even has a zero emissions mode. The top speed is limited to 80mph and it boats a tank-to-tank range of nearly 350 miles.

“I’m a great fan of them and I think they are the future. Not just because o the emissions and environment but the silence.

“The worst thing about sitting in London traffic is sitting alongside noisy buses and diesel cars.”

He added that he reckoned it “could be a game changer.”

All must to the ears of Metrocab regional operations director Gordon Dixon. Keeping his delight in check, he said that “It has been an extremely useful exercise for Metrocab to gain feedback from key figures from London’s leading taxi associations and Mayor Boris Johnson.

“Taxi drivers spend anywhere between eight to ten hours per day behind the wheel, so these are the people that really matter and their comments will help shape our development programme which will see the first new Metrocabs take to the streets of London this summer.”

Testing will now continue (cabbies, fancy a go? Sign up here) prior to the launch in the summer… and Motoring Research will soon be among those getting behind the the wheel. Stay tuned on that. For now, see how it fares in action (and hear from Boris)…

You can now get a Tesla iPhone case for £20

Tesla’s official Amazon page has put a massive discount on its iPhone cases. You can now dress your iPhone in Tesla hardware for as little as £20
Read more

Perceived wisdom says the entry-level Carrera is the best Porsche 911 you can buy. We test the theory with a week-long test on UK roads.
Read more

The all-new Mercedes-Benz GLS is built from the ground up to take genuine S-Class luxury into the SUV sector. It has debuted at NYIAS 2019
Read more