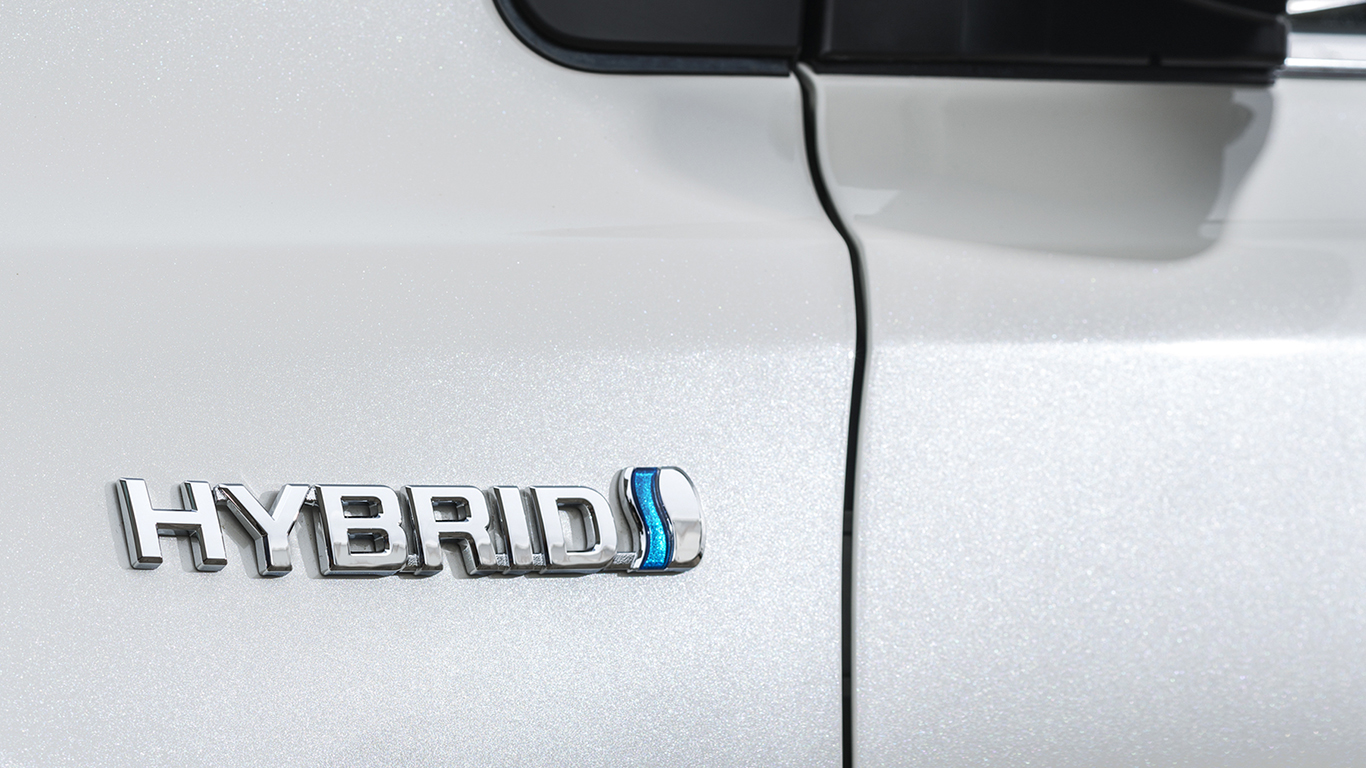 Conventional petrol and diesel cars will be banned from sale in the UK from 2040. Therefore, electrified hybrid cars will be the only models available that still feature some sort of internal combustion engine. The choice of these electrified ‘mild hybrid’ and plug-in hybrid electric vehicles (PHEVs) is now wider than ever, as our selection here shows. All quoted ‘on the road’ prices include VAT, but do not include the government’s Plug-in Car Grant (PiCG) – where applicable. 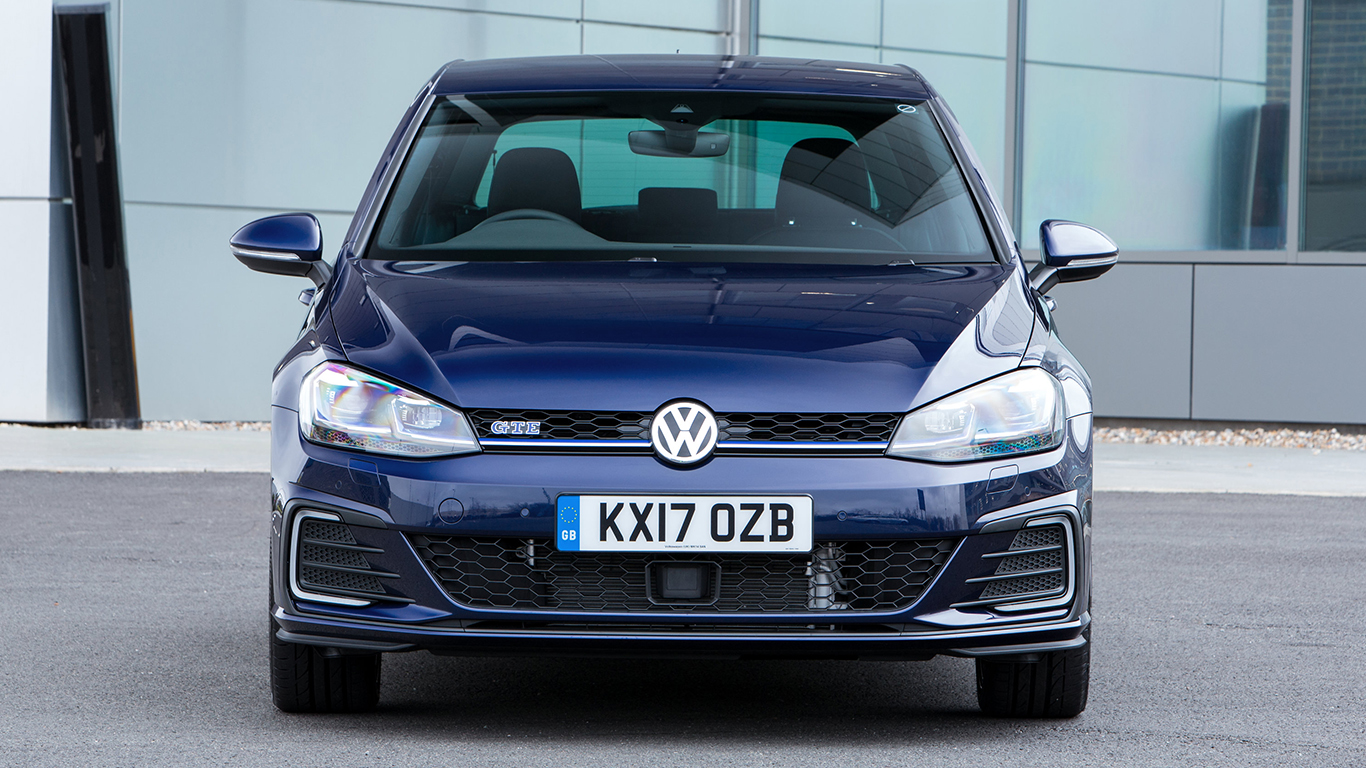 The Golf GTE is Volkswagen’s idea of a fleet-friendly electrified performance Golf in the vein of the legendary GTI. With a combined output of 204hp from its 148bhp 1.4-litre petrol engine and 75kW electric motor, the plug-in hybrid Golf does the 0-62mph dash in 7.6 seconds, yet has CO2 emissions from just 38g/km. Electric-only range is 31 miles, while five electric and hybrid modes allow the plug-in Golf to be tailored to the prevailing driving conditions for the best performance or economy. 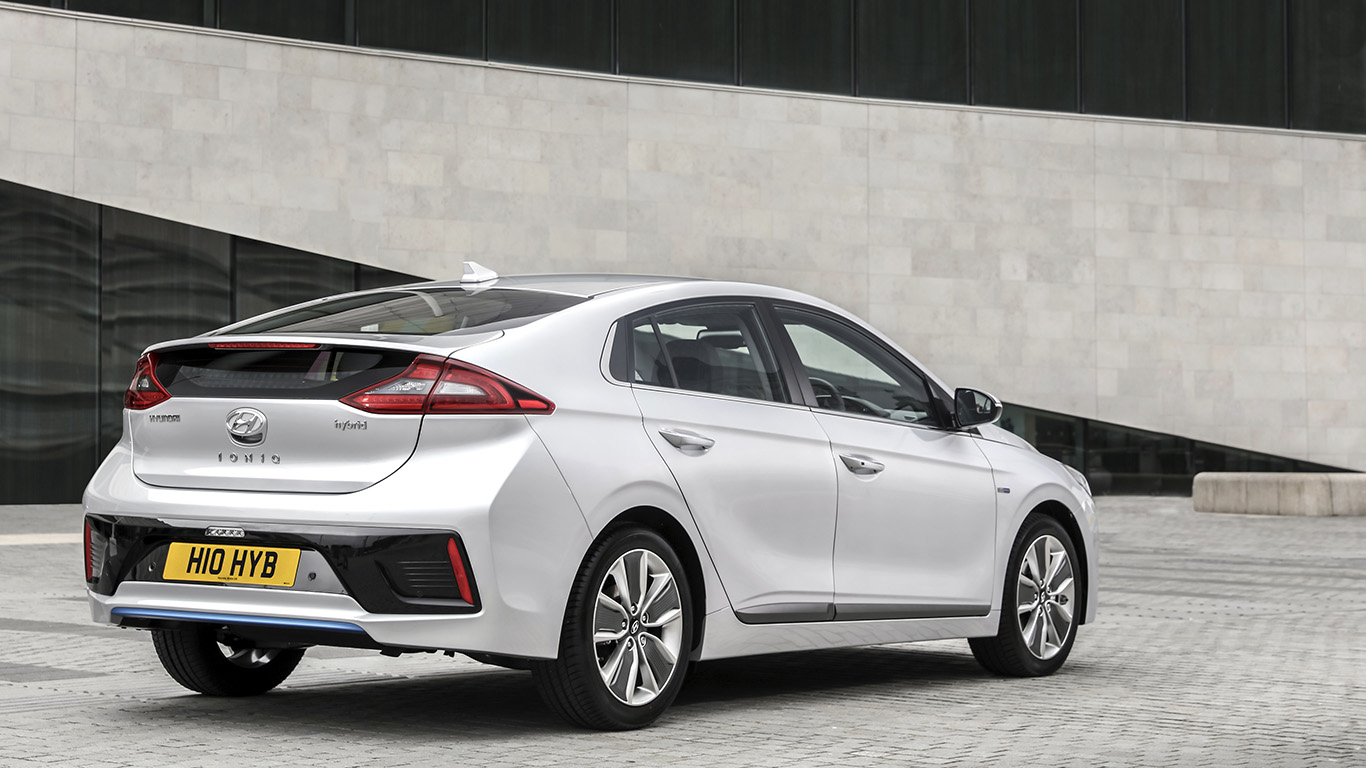 The Ioniq is Hyundai’s new flagship range of electrified cars. Available in all-electric, plug-in hybrid, and ‘mild’ non-plug-in hybrid versions, the latter car has an official total range of 700 miles. With a low drag coefficient figure of 0.24, the plug-in version of the hybrid Hyundai boasts a combined economy figure of 256.8mpg and CO2 emissions from 29g/km. The interior is a step up from Hyundais of old, while blue accents inside and out point to the hybrid version. 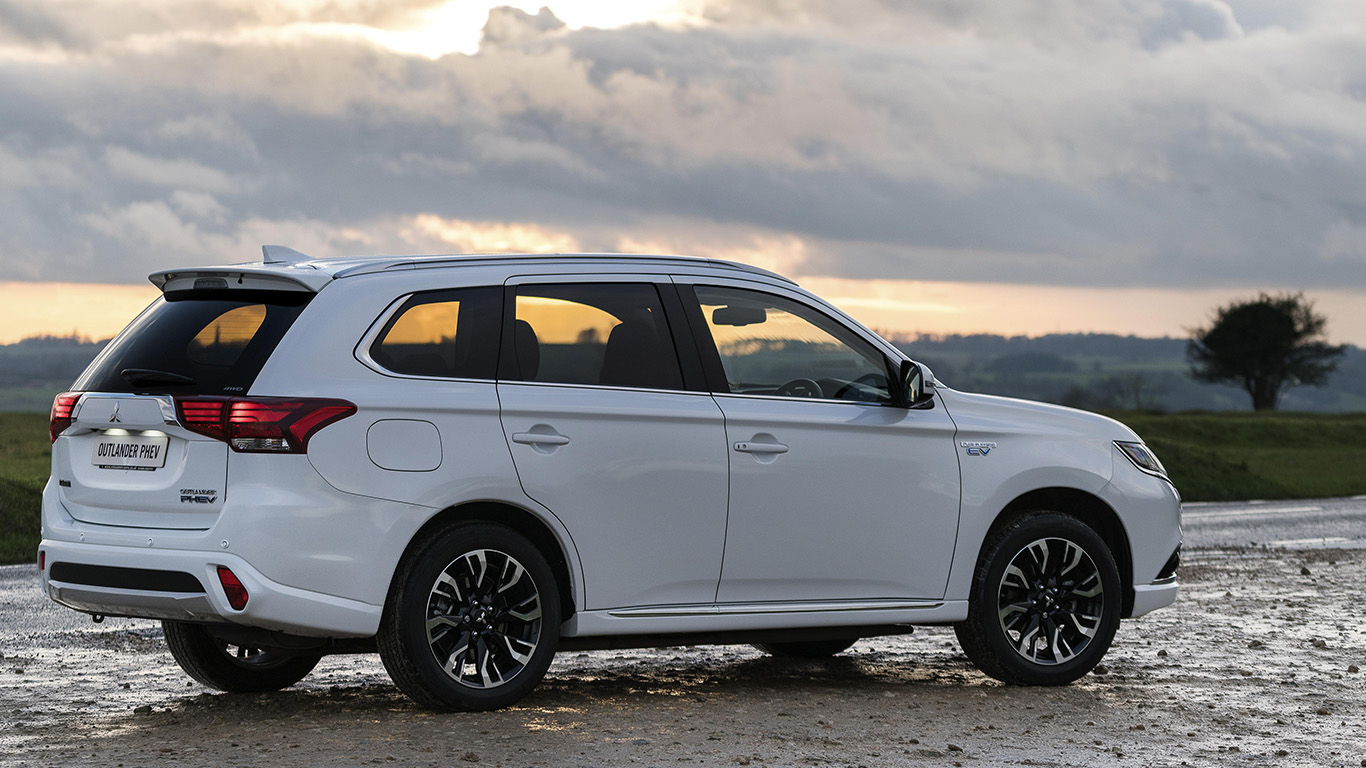 Want a hybrid more suited for the rough and tumble? The 41g/km Mitsubishi Outlander PHEV was the world’s first plug-in hybrid SUV and has proved very popular in the UK thanks to its low company car tax costs at launch. As well as more than enough space for families, the big SUV from Japan mates a 2.0-litre petrol engine to a pair of electric motors for up to 166mpg, and has the extra option of four-wheel-drive capability. 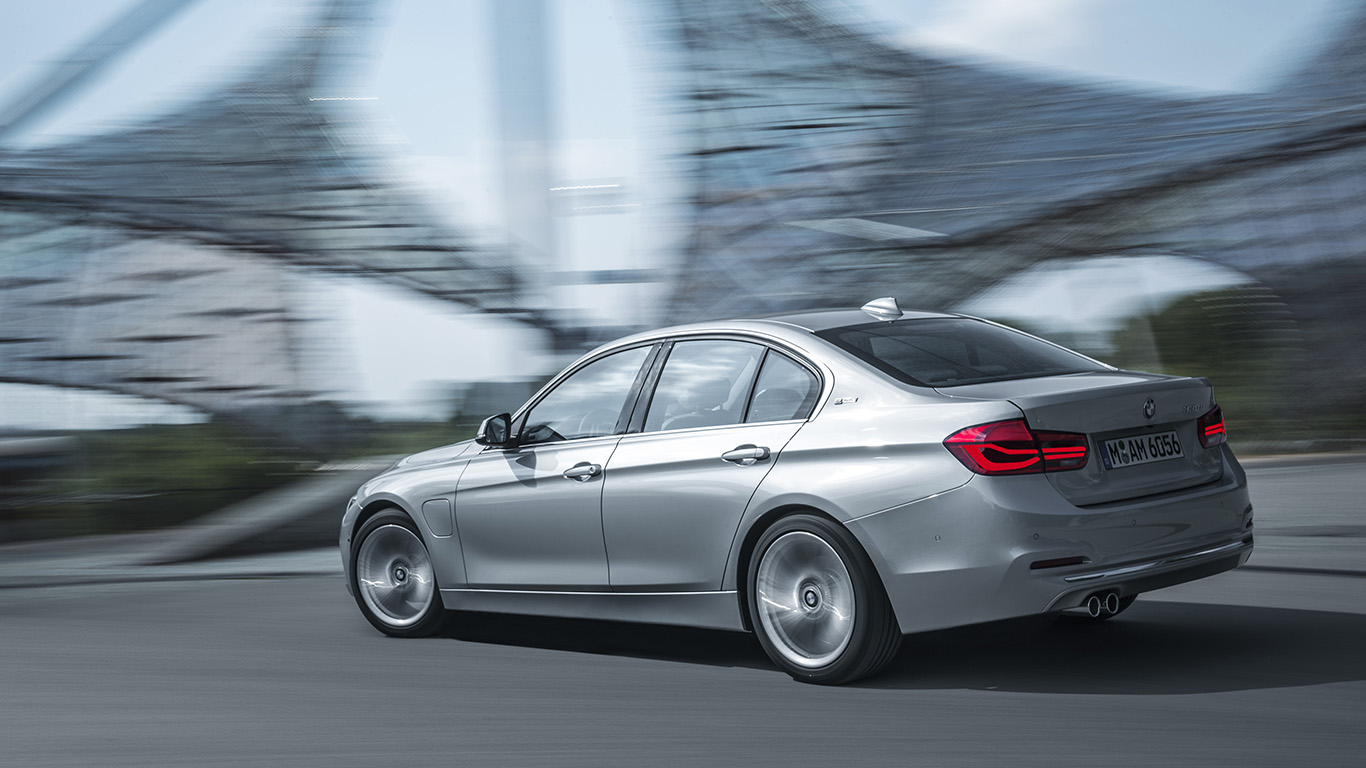 BMW’s ubiquitous but very popular and business-aimed compact executive car is now available as a plug-in hybrid. The 330e iPerformance combines a 184bhp four-cylinder 2.0-litre petrol engine, a 65kW electric motor and a 7.6kWh battery to give 251hp. There’s also a 0-62mph time of 6.1 seconds, CO2 emissions as low as 44g/km, an electric-only range of around 25 miles, and all the dynamism the 3 Series is known for. 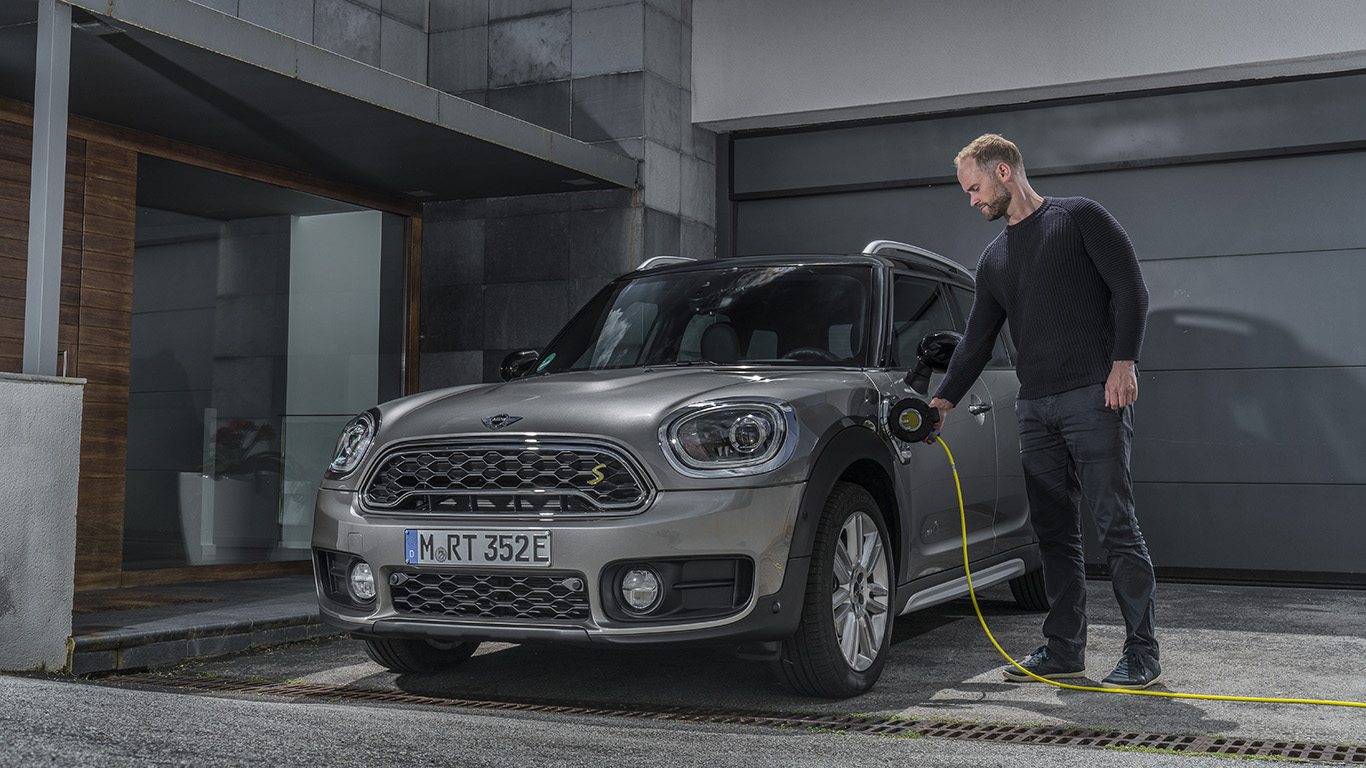 Enjoying its debut at the 2017 Goodwood Festival of Speed, the first electrified series production Mini can travel up to 26 miles with zero emissions. When combined with a 1.5-litre, three-cylinder engine, the plug-in hybrid has a total range of 310 miles. Three switchable driving modes help to get the maximum range in any situation, as well as up to an official 134mpg on the combined cycle. All with that standard Mini desirability, too. 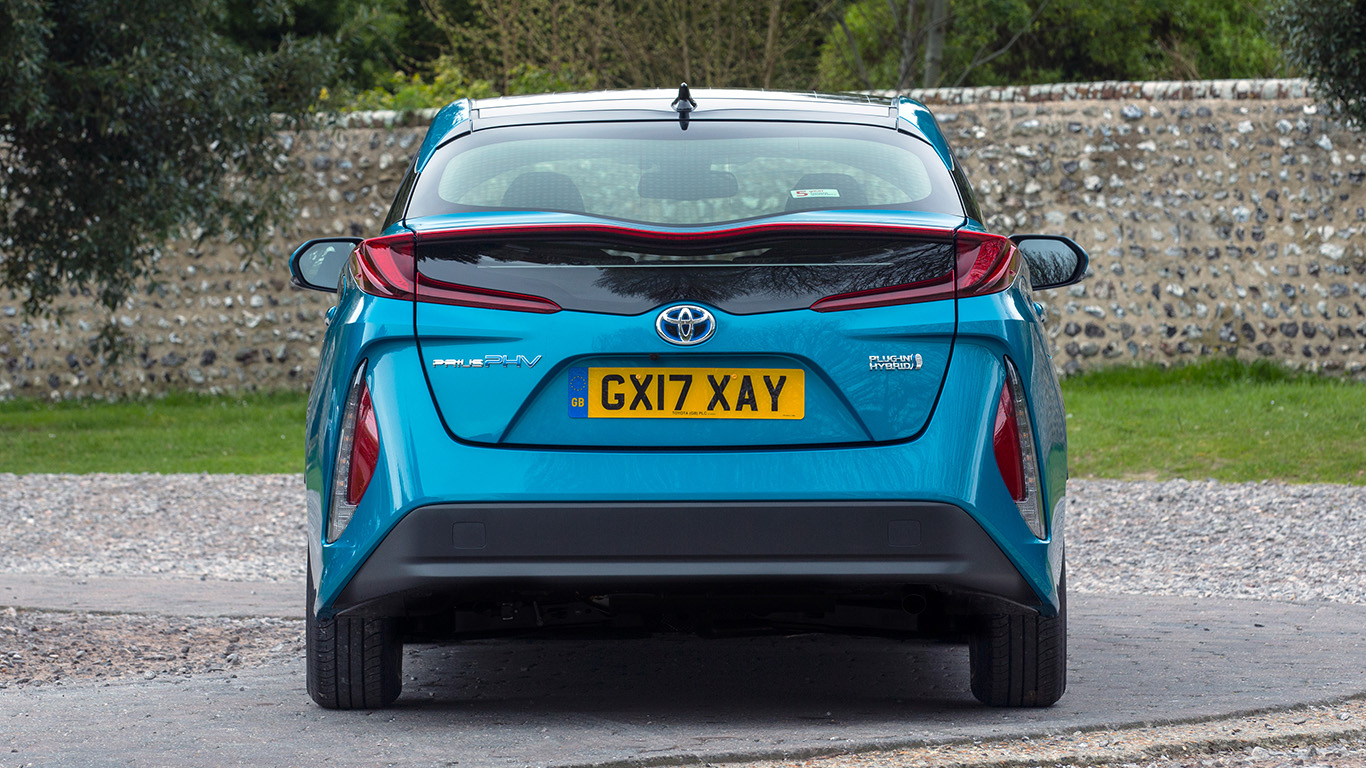 The fourth generation of Toyota’s original pioneering hybrid has fuel economy of up to 94.1mpg and emissions from 70g/km. On the move, the Japanese ‘mild hybrid’ shuffles power between its 1.8-litre petrol engine, 53kW electric motor and 6.5Ah battery depending on the driving conditions. A new plug-in version boasts economy of up to 283mpg, and has the option of a solar panel roof for an easy three miles of additional electric range. 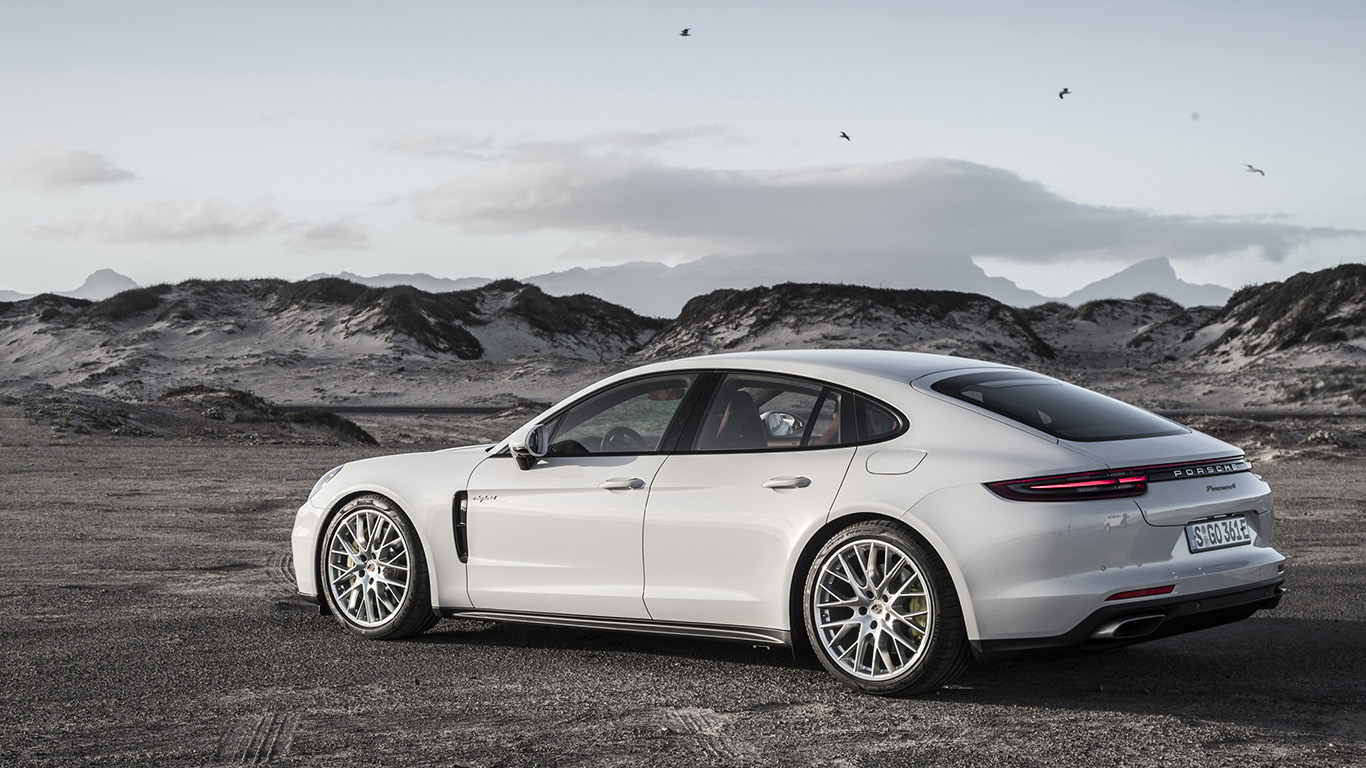 The second generation of Porsche’s super saloon features an ‘E-Performance’ powertrain with a minimum of 468hp, yet is capable of a quoted 113mpg. The entry-level 56g/km Panamera 4 E-Hybrid boasts 335hp from its 2.9-litre V6 and 100kW electric motor, but all, including the full-fat 558hp Turbo S E-Hybrid, have an all-electric range of 31 miles. Offering typical Porsche performance, but with an economy slant, the lime green brake callipers are the most obvious giveaway. 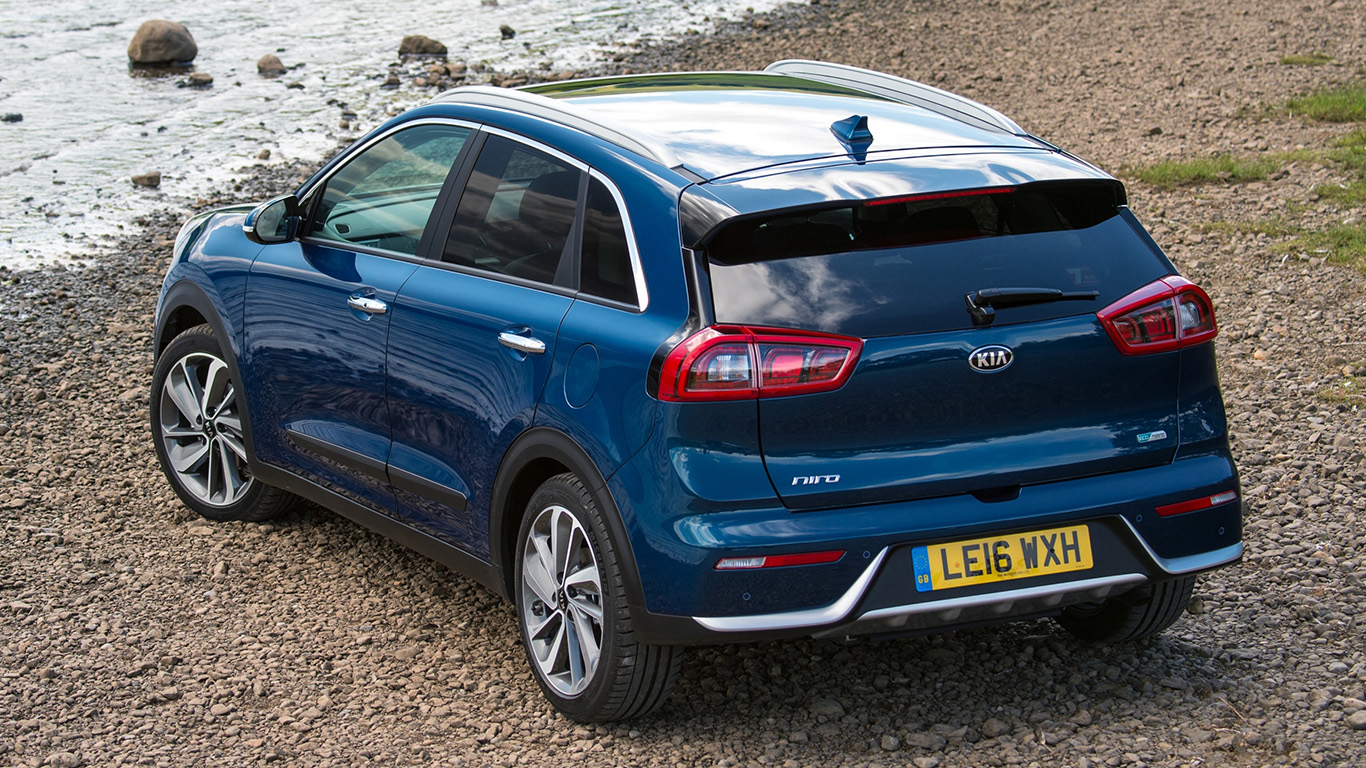 The Niro is Kia’s first dedicated hybrid model. Emissions start at 88g/km, while the South Korean company quotes fuel consumption of up to 74.3mpg. The 105hp 1.6-litre GDi petrol engine and 1.56kWh lithium-ion battery are wrapped in a fashionable crossover body. There’s no plug-in option here, as the Niro is a ‘mild hybrid’, and thus decides which part of its powertrain to use depending on driving conditions. 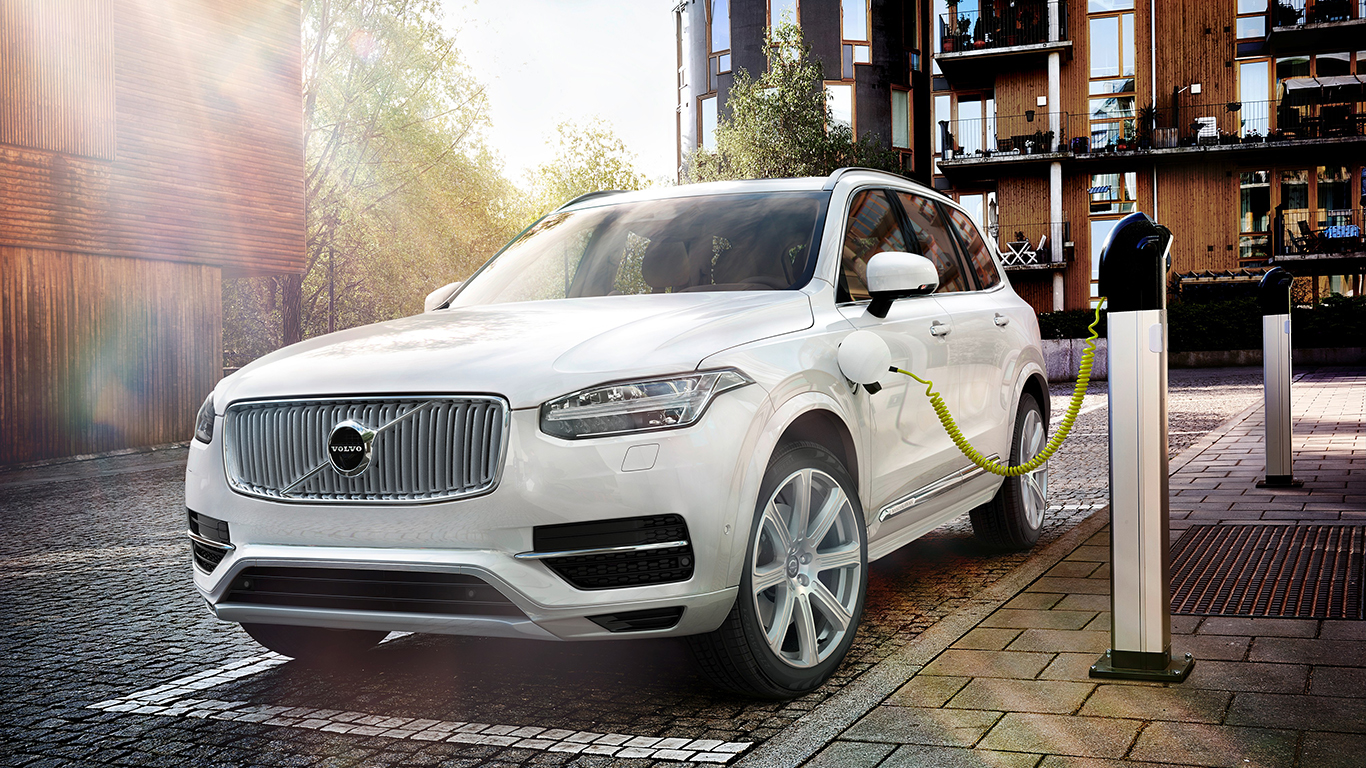 The latest XC90 was Volvo’s first push further upmarket, and the reinvented SUV really looks the part from its ‘Thor’s hammer’ headlights to its plush and beautifully-executed cabin, complete with its portrait-orientation nine-inch colour touchscreen and Orrefors Crystal gear knob. While it may be pricey, the 49g/km plug-in hybrid Volvo’s 324hp 2.0-litre petrol engine is both supercharged and turbocharged for prodigious performance, while it can travel up to 78mph on electric power alone thanks to a 68kW electric motor. A host of standard ‘IntelliSafe’ technologies and all-wheel drive help maintain Volvo’s reputation for safety. 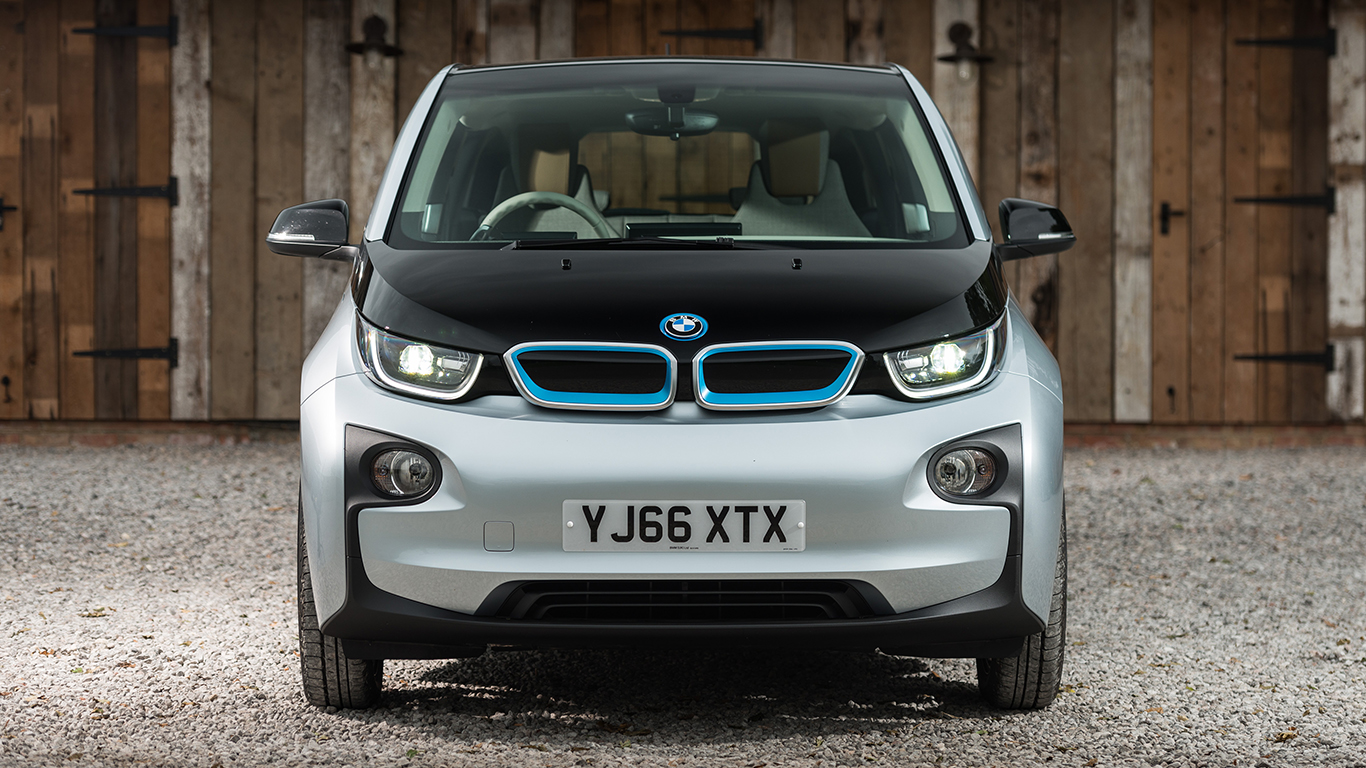 BMW claims its carbon-fibre-reinforced-plastic i3 ‘is the world’s first mass production model to be designed for sustainability at every stage’. The avant garde small car was launched in 2013 and added a fashionable twist to EV motoring. Updated with a larger-capacity 94Ah battery last year, the 12g/km Range Extender (REx) model sits alongside a 0g/km pure-electric version. The latter has a 125-mile range, while the i3 REx’s 649cc two-cylinder petrol engine generates electricity to charge the battery, increasing range to 206 miles. 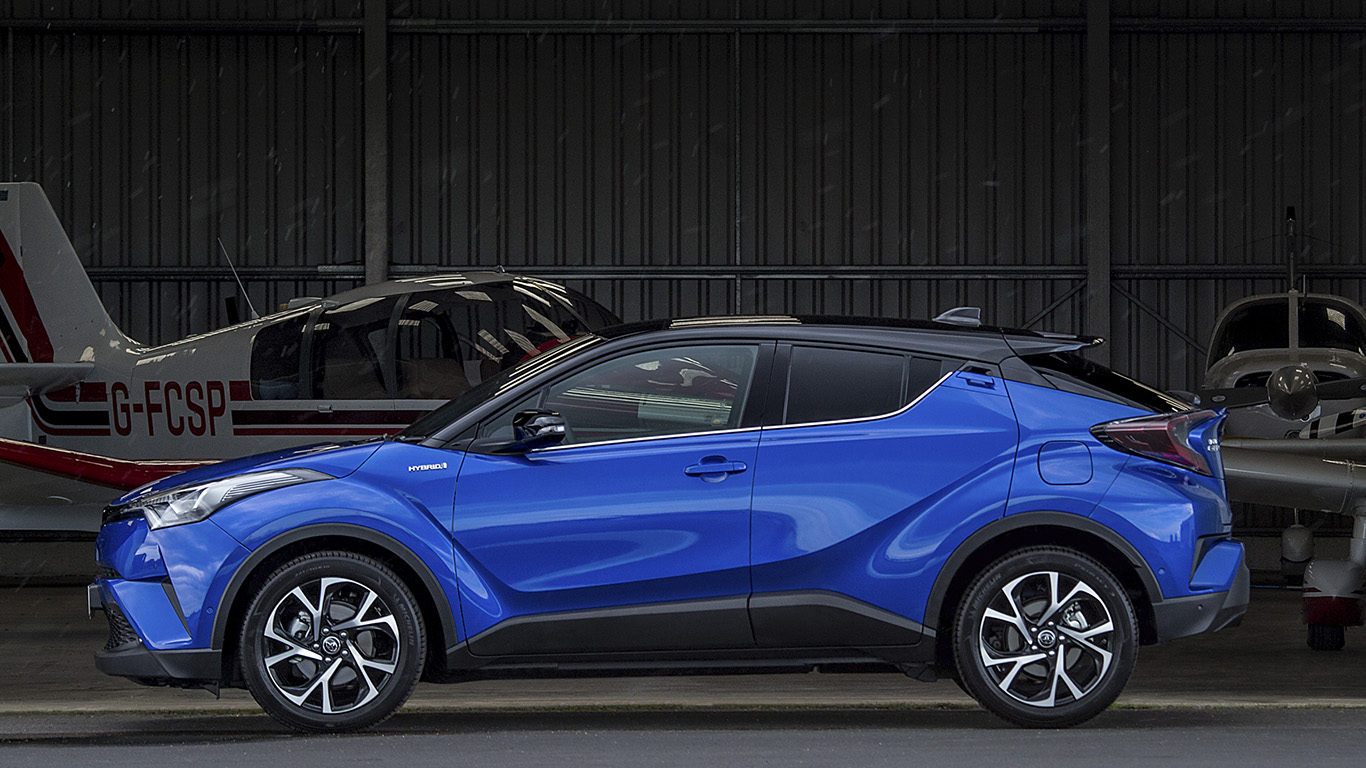 C-HR means ‘Coupe High Rider’ according to Toyota and is what it calls its striking new crossover. A daringly-styled compact SUV, the C-HR marries the latest Prius’ advanced platform, hybrid powertrain and CVT automatic gearbox to a more interesting family-friendly silhouette. There’s a definite Lexus-like feel inside, with emissions as low as 86g/km – as well as claimed 74.3mpg fuel economy. 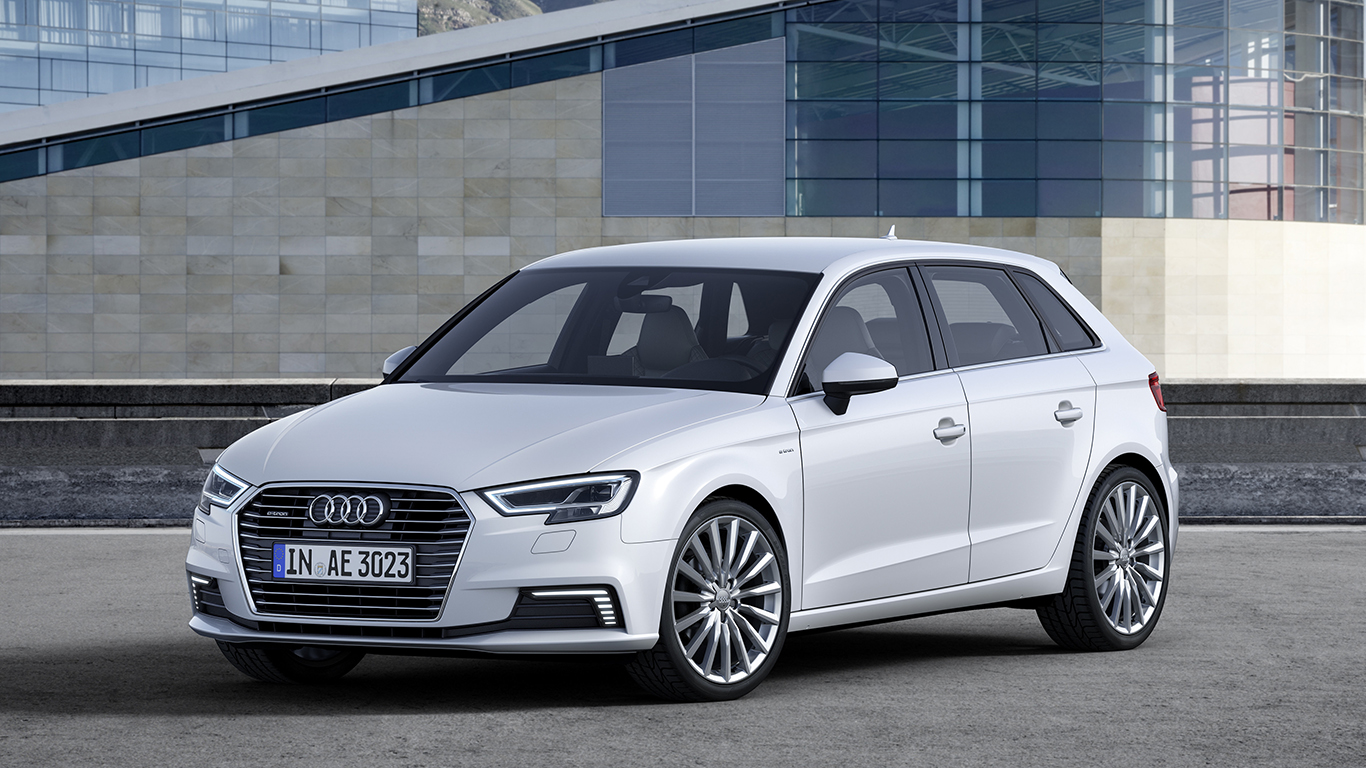 With CO2 emissions of 38g/km and a 1.4-litre engine, the Audi A3 Sportback E-tron is the Ingolstadt manufacturer’s answer to the Volkswagen Golf GTE. Only available in one trim level and with five doors, the plug-in hybrid Audi can travel up to 29 miles on electric power alone, while the ‘Audi Drive Select’ mode offers a choice of hybrid or electric-only power. An Audi app allows for charge level, electric range and car location monitoring, and LED exterior lighting makes sure the Sportback E-tron stands out from other versions of the German premium family hatchback. 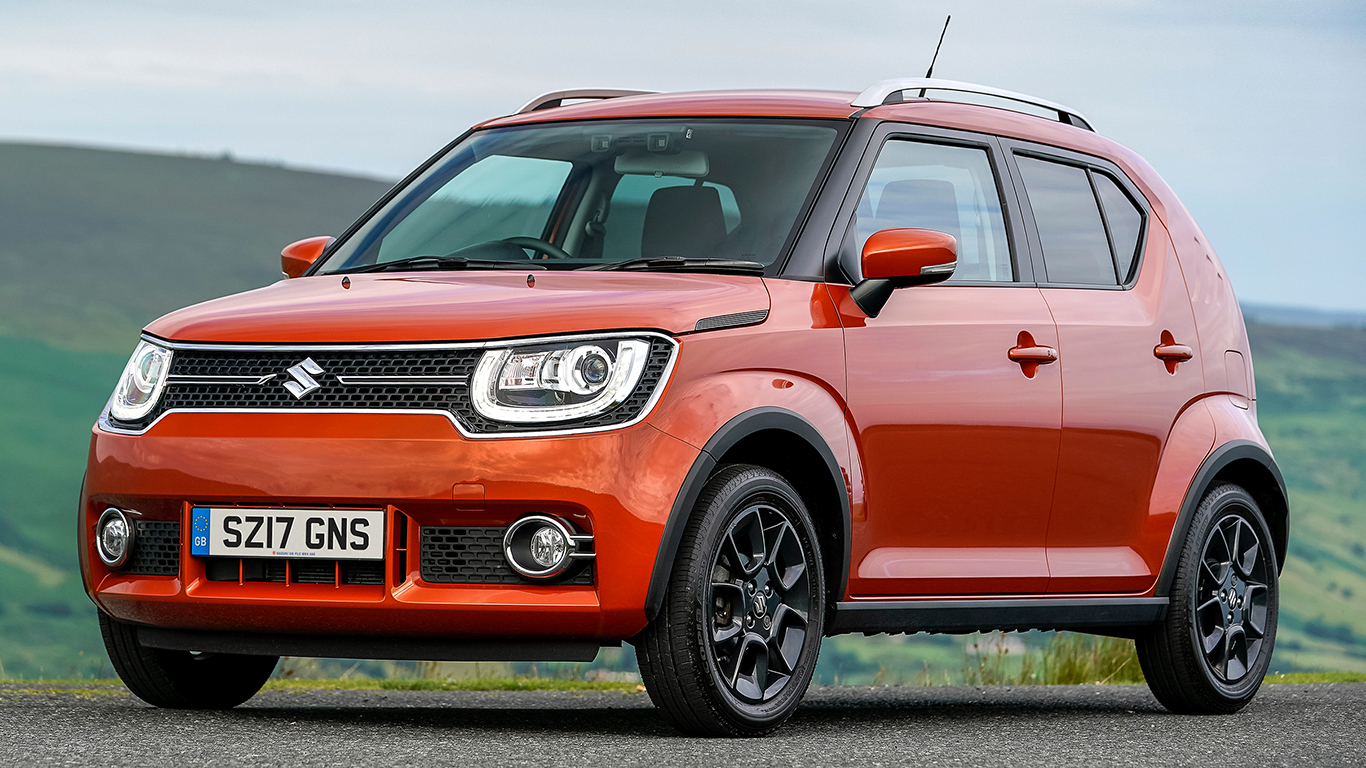 The dinky little Ignis has a cheeky look and character, plus, perhaps surprisingly, the option of a hybrid powertrain. The 1.2-litre engine develops the same 90hp as the other models in the range, but the SHVS (Smart Hybrid Vehicle by Suzuki) model’s uprated starter motor ensures faster scampering away from the traffic lights, while emissions drop from 106g/km to 97g/km. Fuel economy is an official 66mpg, and it’s all wrapped up in a stylish small SUV body. There’s even a 4×4 version. 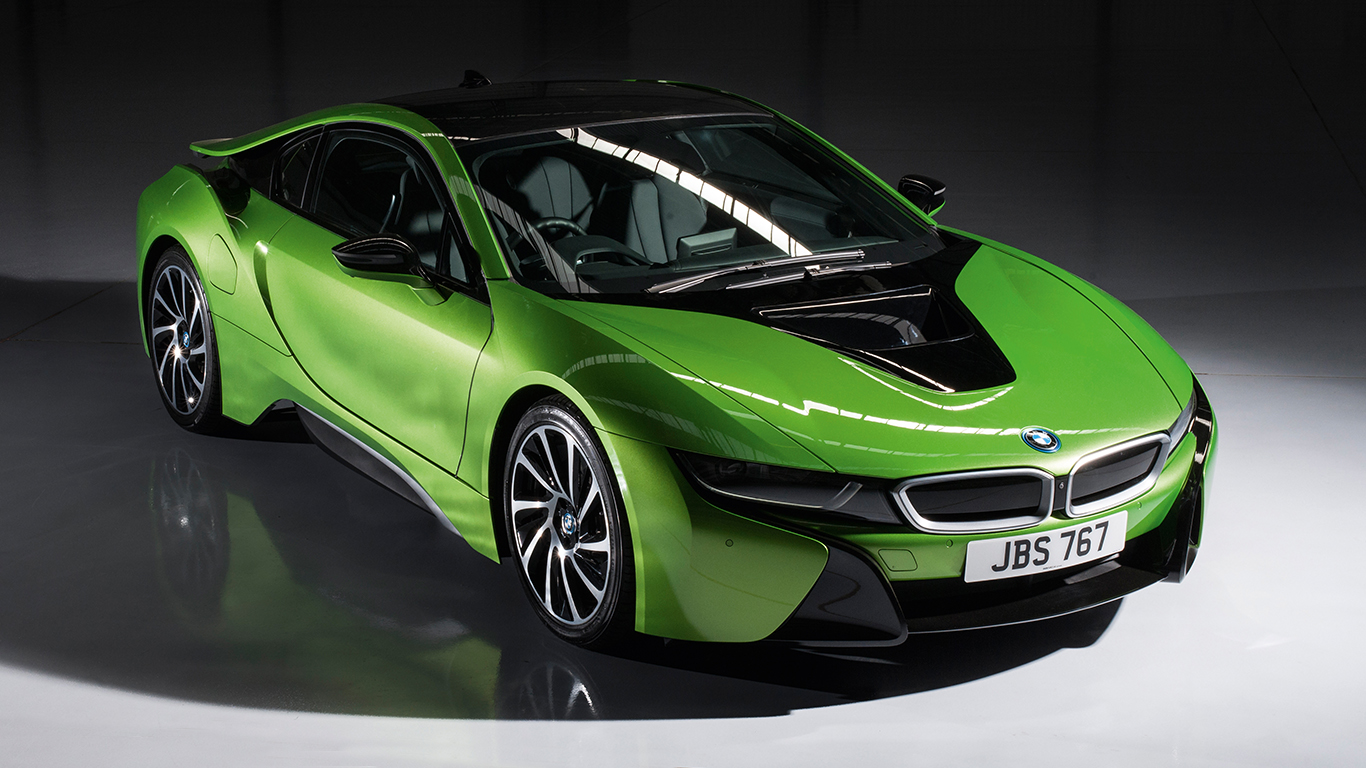 The slinky BMW i8 was arguably the world’s first ‘mainstream’ electrified sports car. From its impressive dihedral doors to its air-cheating sculpted rear wings and distinctive blue exterior highlights, the i8 looks every inch the performance car it is. The front-mounted 133hp electric motor and rear ‘TwinPower Turbo’ 1.5-litre three-cylinder petrol engine combine to send the low-slung Bee-Em from 0-62mph in just 4.4 seconds, while emitting 49g/km and achieving a claimed 134.5mpg. 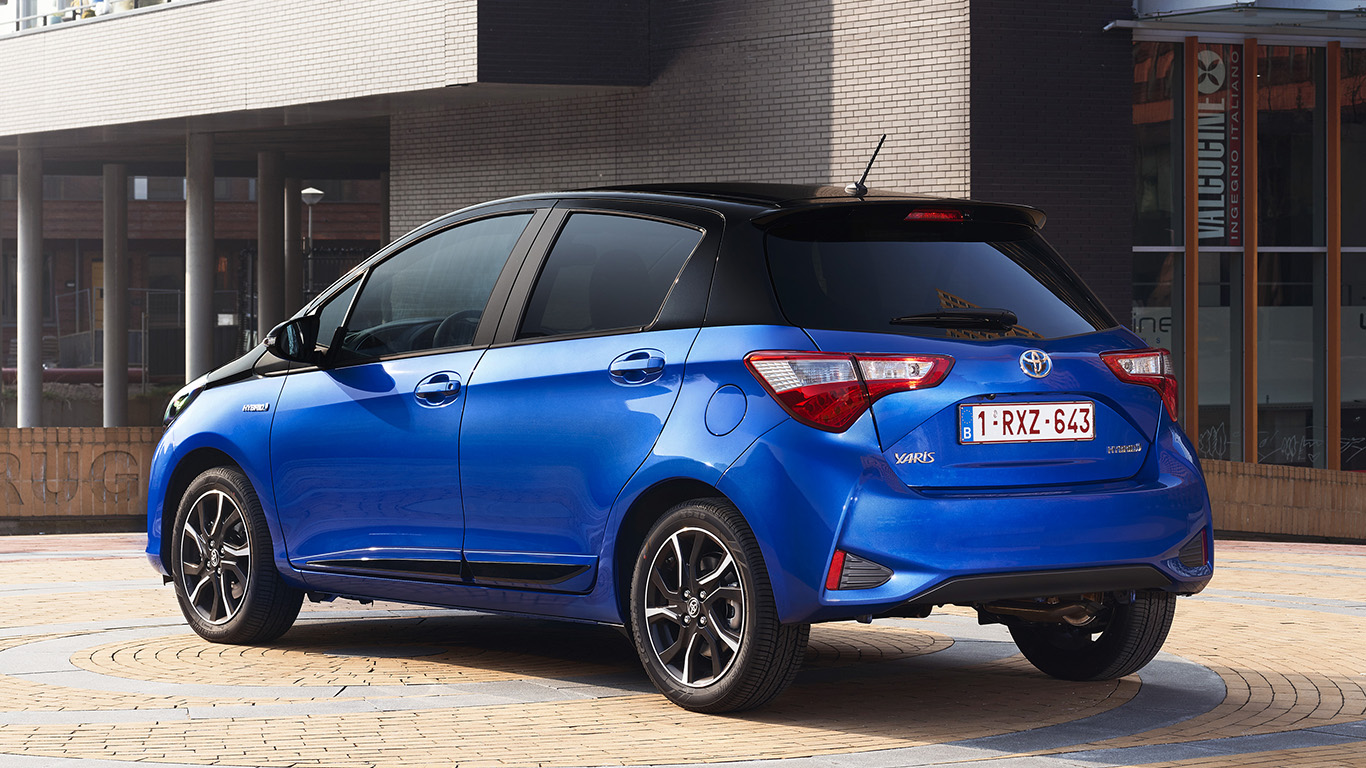 Recently refreshed, the Toyota Yaris has the small hybrid market to itself. The only supermini to be fitted with a petrol-electric powertrain, the Yaris has a 101hp 1.5-litre VVT-i engine, which produces emissions between 75g/km to 82g/km, depending on trim. Aided by its 45kW electric motor and 6.5Ah nickel-metal hydride battery, Toyota claims its smallest hybrid can deliver fuel economy of between 78.4mpg and 85.6mpg. All petrol-electric Yaris models come with dual-zone automatic air conditioning and a push-button start system. 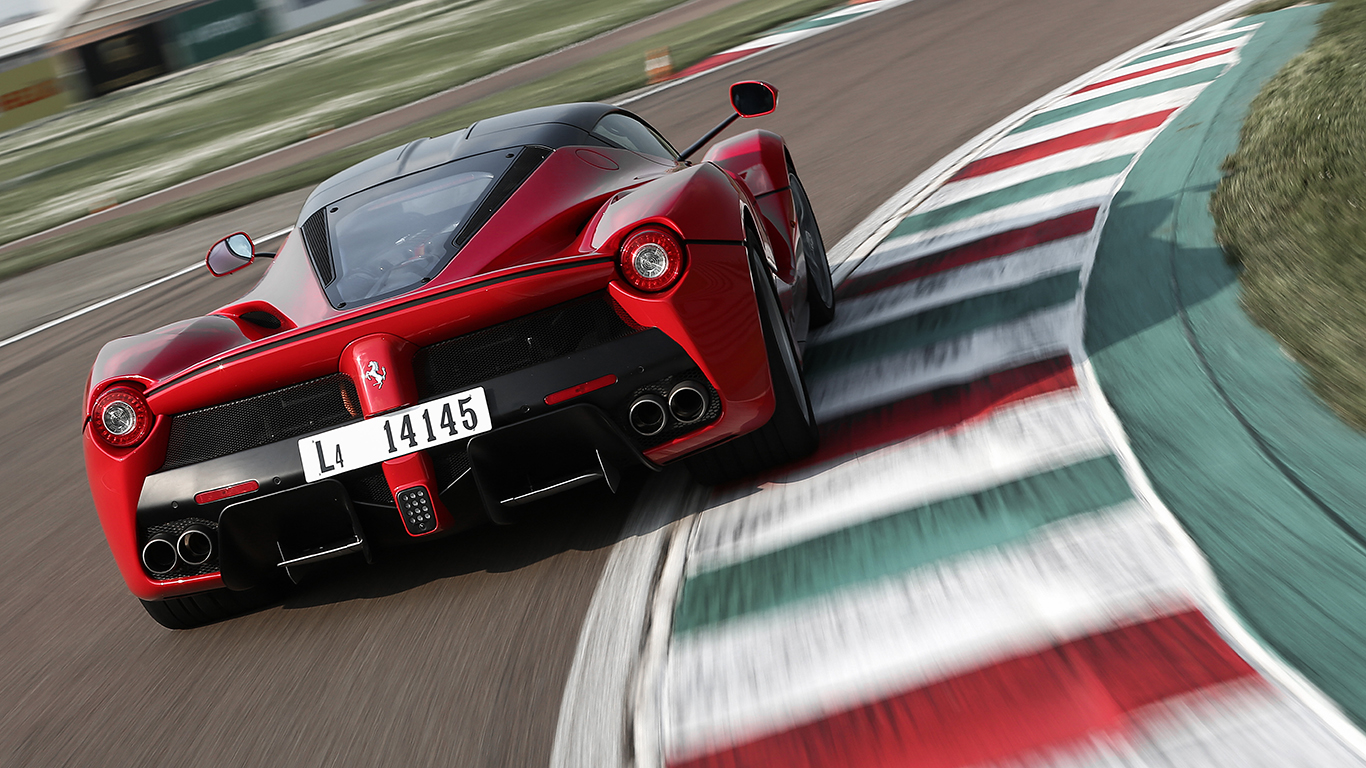 OK, we’ve cheated a bit here. While the Toyota Yaris Hybrid sits at one end of the scale, at the other is the £1 million Ferrari LaFerrari. And while the Ferrari website still lists it, all 499 examples have been sold. Dubbed the Marenello maker’s ‘most ambitious project’, the Italian supercar hybrid takes technology from F1. Its 6,292cc V12 engine produces 800hp, while the electric motor produces an addition 163hp (120kW) for a combined system output of 963hp. That means up to708lb ft of torque and 0 to 62mph in ‘less than three seconds’. 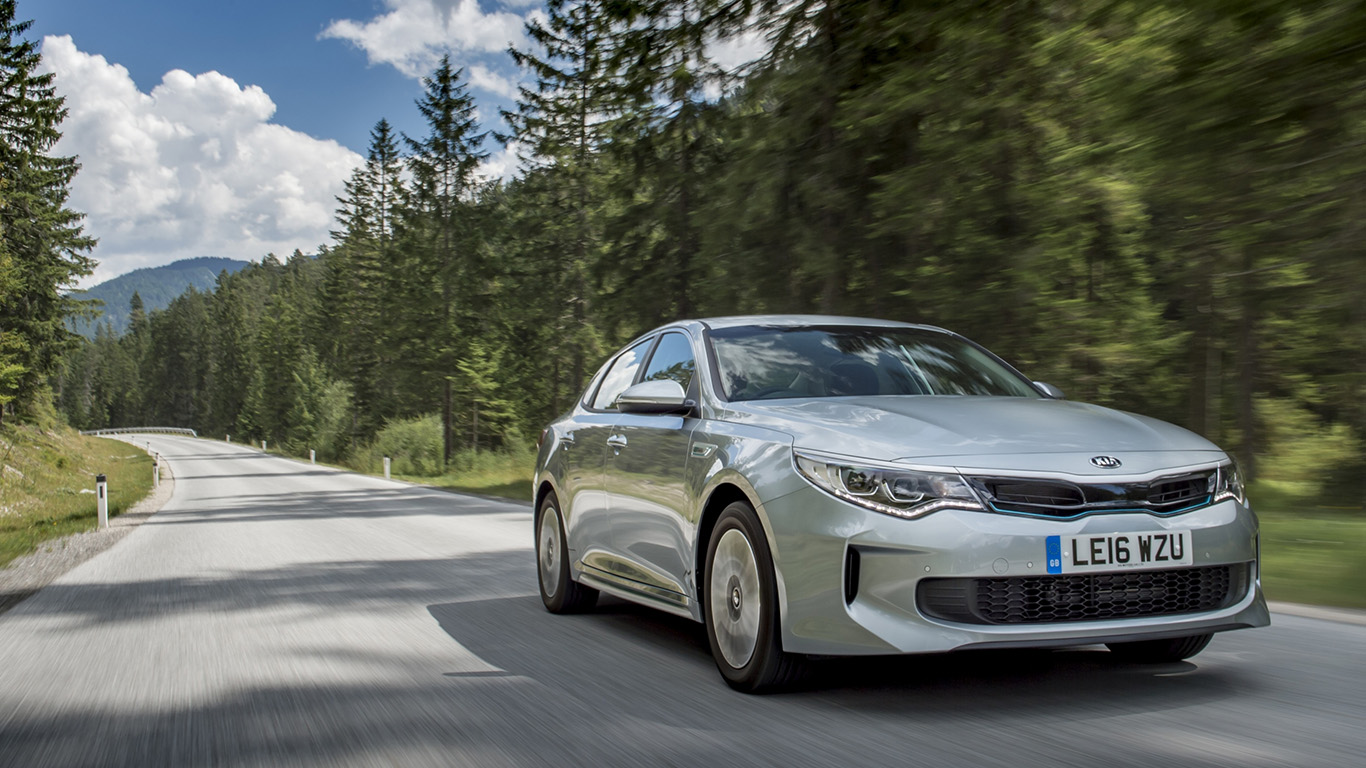 Unlike its Niro stablemate, the Kia Optima Plug-in Hybrid, as its name suggests, can be ‘refilled’ with electricity by plugging it into either a home or public charge point, as well as a domestic socket. With emissions of 37g/km and claimed economy of up to 176.6mpg on the combined cycle, the Optima offers executive car comfort and sustainability thanks to its 2.0-litre GDi petrol engine and 9.8kWh battery. 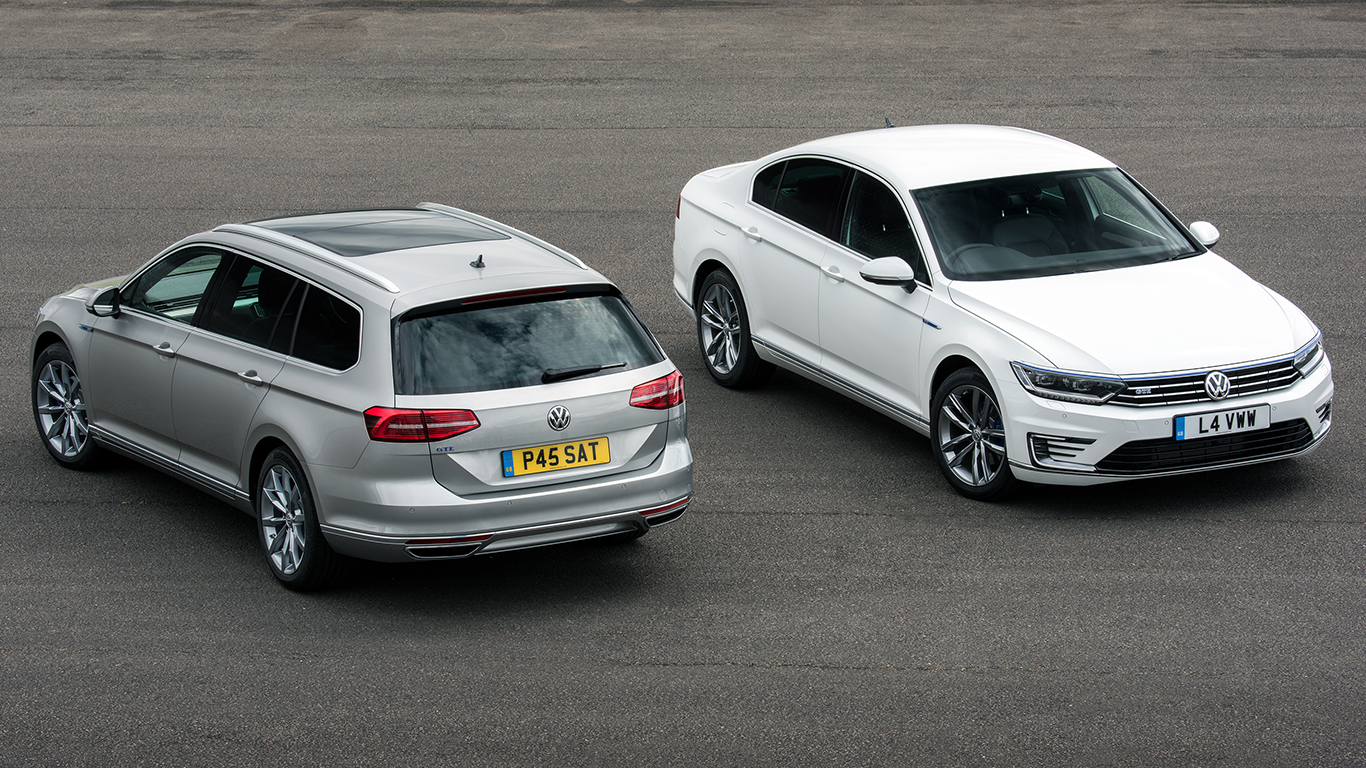 A rival to the Kia Optima Plug-in Hybrid, the Volkswagen Passat GTE is the German manufacturer’s petrol-electric executive car. Emissions are 40g/km for both the GTE and higher-specification GTE Advance models, while the 156hp 1.4-litre TSI petrol engine and 85kW electric motor powertrain is good for 218hp. The benchmark 0-62mph sprint takes 7.5 seconds, while economy is a stated 156.9mpg. As with the Golf GTE, five driving modes allow a balance between performance and economy. 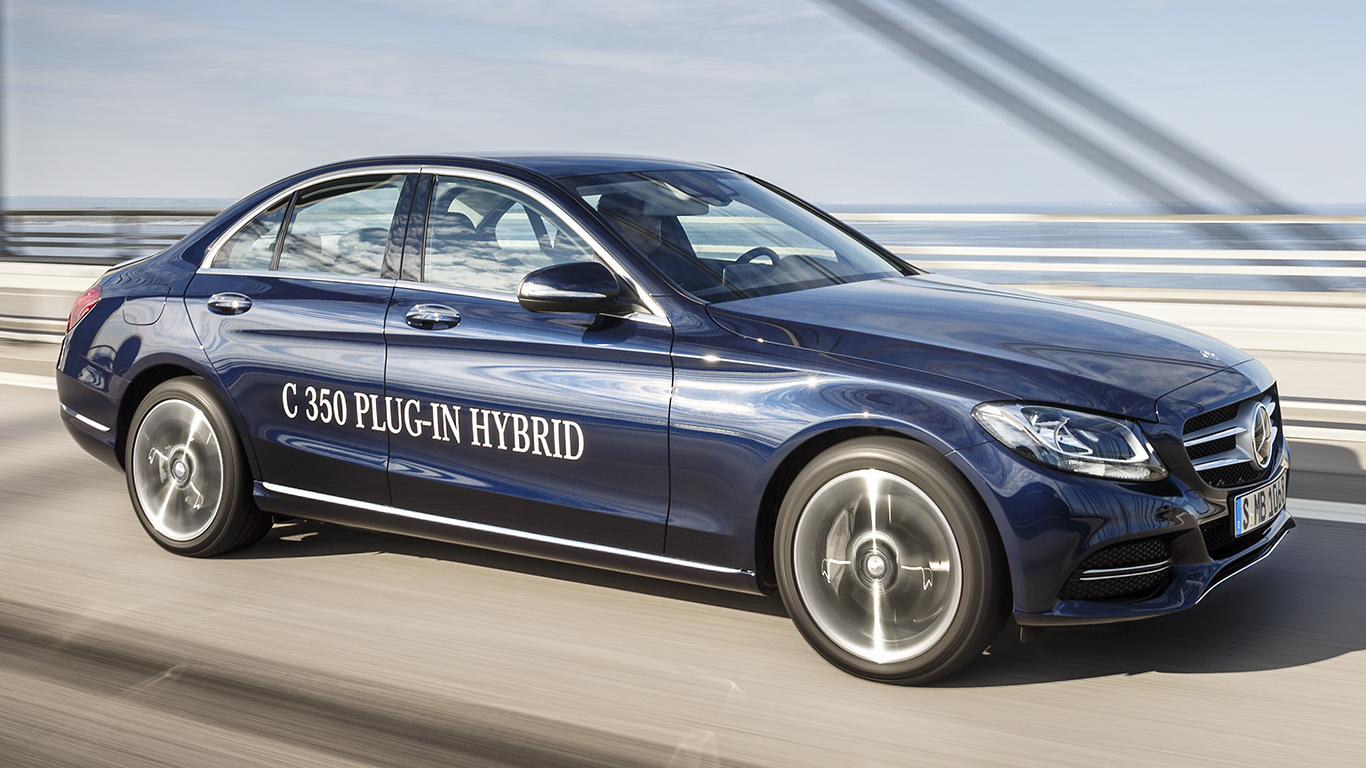 One of the UK’s top 10 most popular cars, the Mercedes-Benz C-Class features two hybrid models in its range. Marrying a 204bhp 2.2-litre diesel engine to a 20kW/27hp electric motor, emissions for the C300h start at 94g/km in SE trim. However, the plug-in hybrid C350e beats that, its 214hp 2.0-litre petrol engine and 60kW/83hp electric motor good for just 48g/km. With 17-inch wheels, the C350e also qualifies for the government’s Plug-in Car Grant, which deducts up to £2,500 from its list price. There are estate versions of both diesel and petrol hybrid models, too. 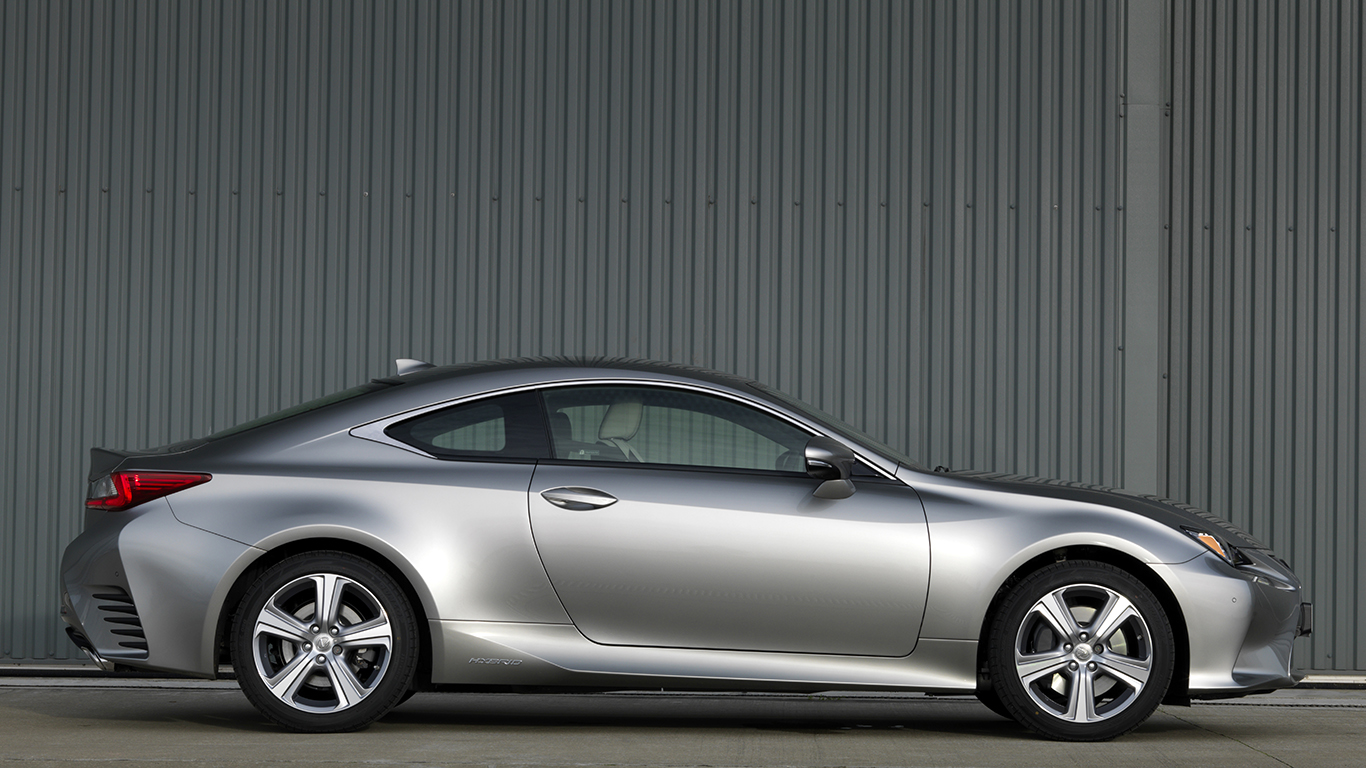 Lexus bills the RC 300h as the ‘world’s first luxury coupé powered by a full hybrid powertrain’. Developed on the fearsome Nürburgring racing circuit by the team behind the LFA supercar, its 2.5-litre petrol engine is allied to 105kW electric motor to deliver 226hp. Start/stop technology and exhaust heat recycling bring emissions and fuel consumption as low as 113g/km and 57.6mpg. Four driving modes – Eco, Normal, Sport, and Sport+ – mean the hybrid Lexus two-door can be both an economic cruiser or a modestly powerful performance machine.