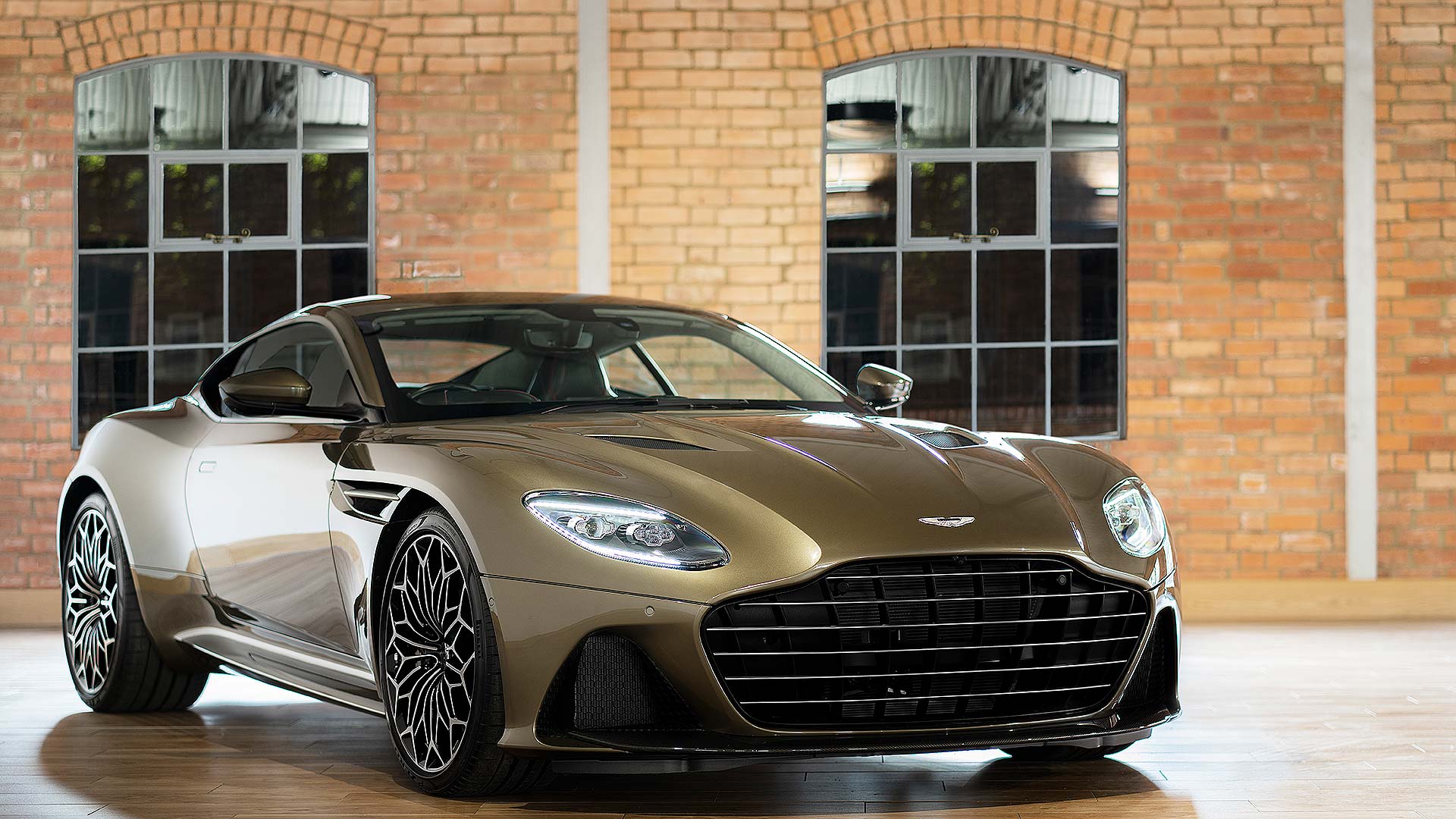 Not quite the catchy title you’d expect for a V12 supercar? Well, we’ve cracked the code: it stands for On Her Majesty’s Secret Service.

Why the special edition? Well, 2019 marks 50 years since production began on the film, so Aston Martin is producing 50 OHMSS Edition DBS Superleggeras to celebrate. 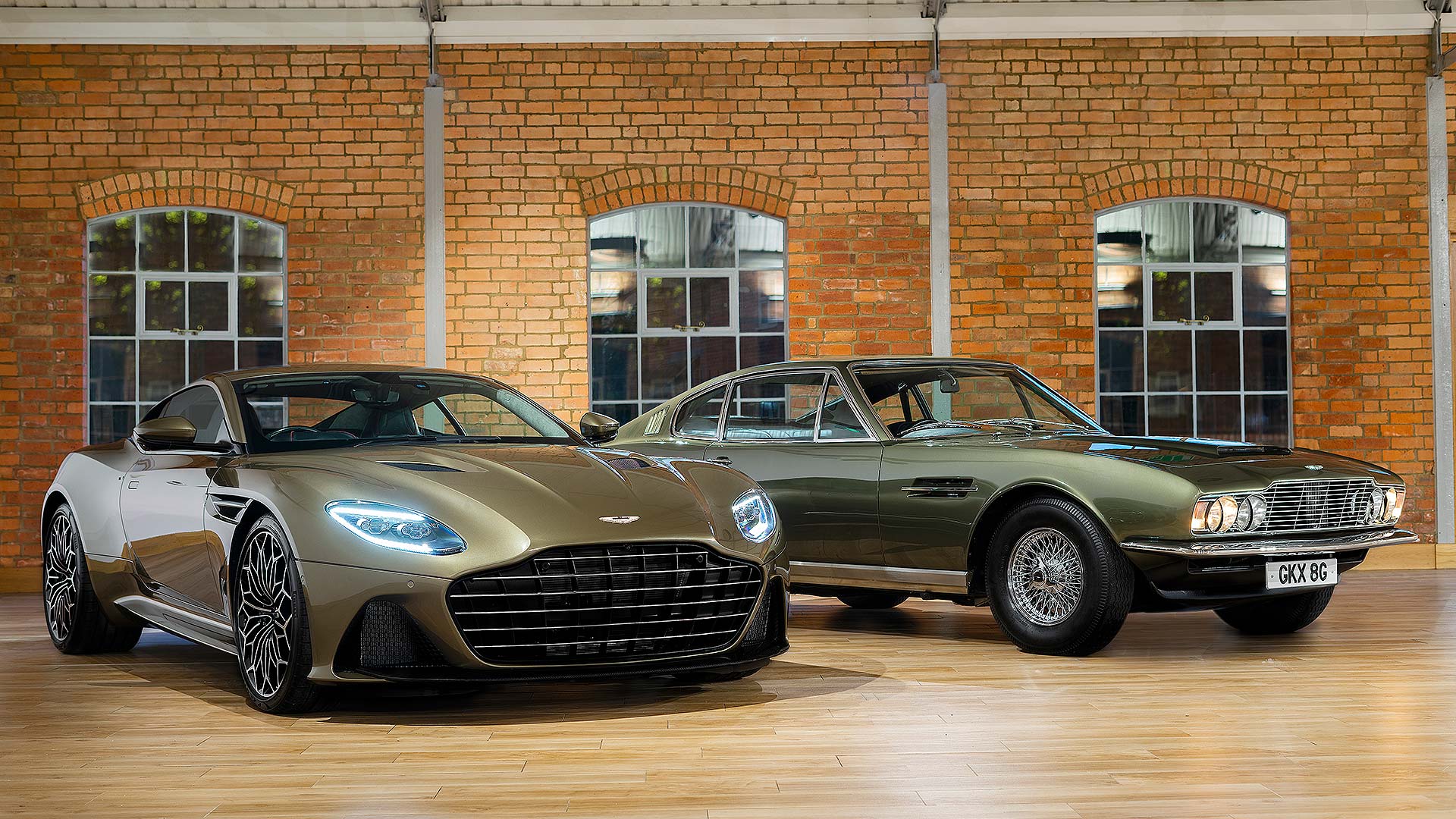 To recap, On Her Majesty’s Secret Service features one of the most underrated automotive cameos in a Bond film. Everyone remembers the DB5, but in 1969, 007 enlisted the services of a tricked-out Olive Green DBS V8. 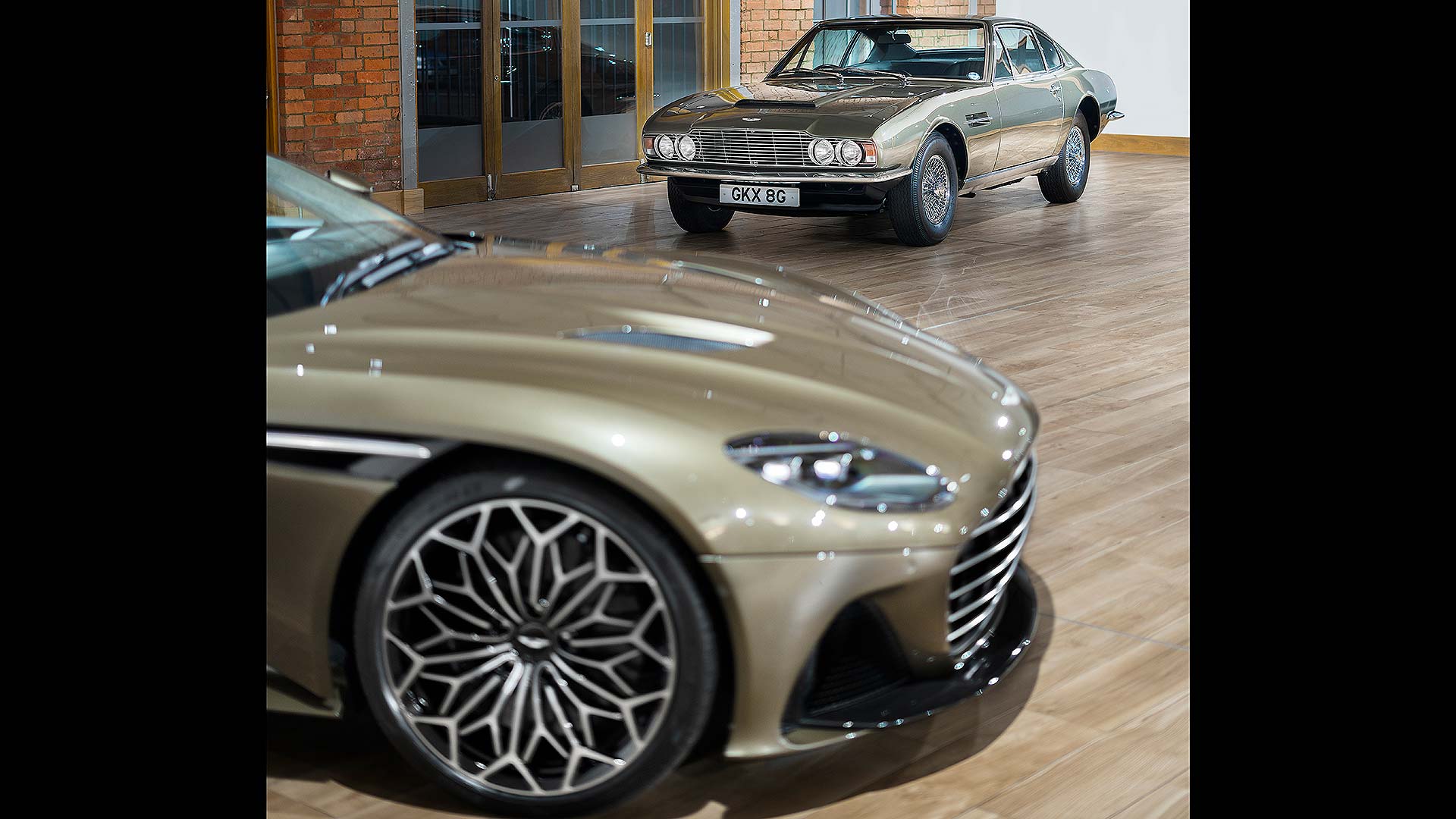 You’ll be able to tell an OHMSS apart by its special alloys, which pay tribute to the wire wheels on the original DBS, as well as a traditional slatted grille – a homage to the original’s mouth-spanning metalwork.

“The DBS Superleggera is a muscular car that commands attention, but the Olive Green gives it a subtlety that belies the beast beneath,” said Aston Martin vice president Marek Reichman of the car’s distinctive colour.

The devil’s in the details 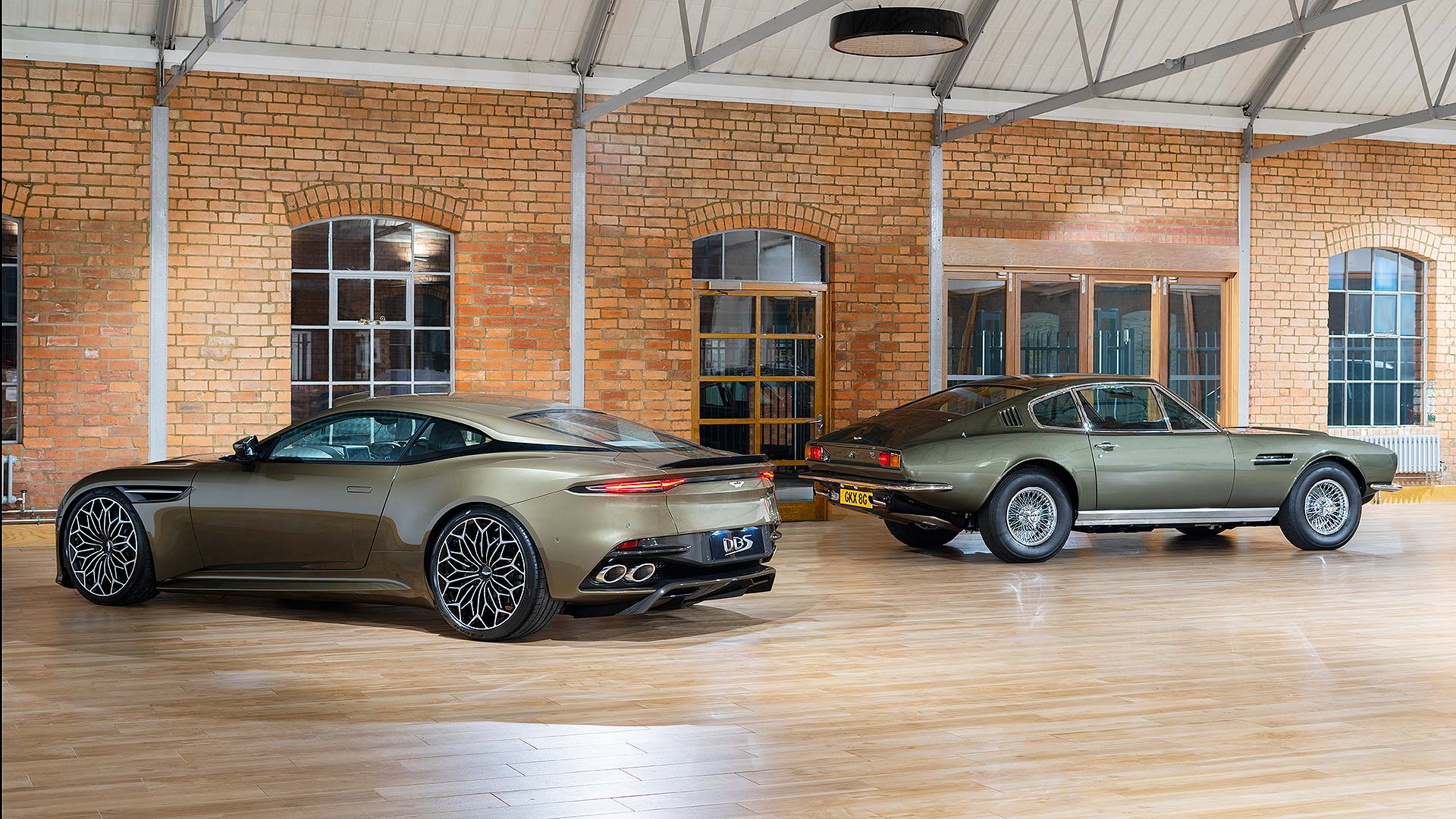 Up-close, you’ll note the roof is body-colored and the brightwork is, well, bright. Even the lamp units at the front feature a lighter plastic material inside.

Many modern cars darken a lot of what was once chromed or brushed aluminum. Not here: along with the new grille, the exhaust tips are chromed. 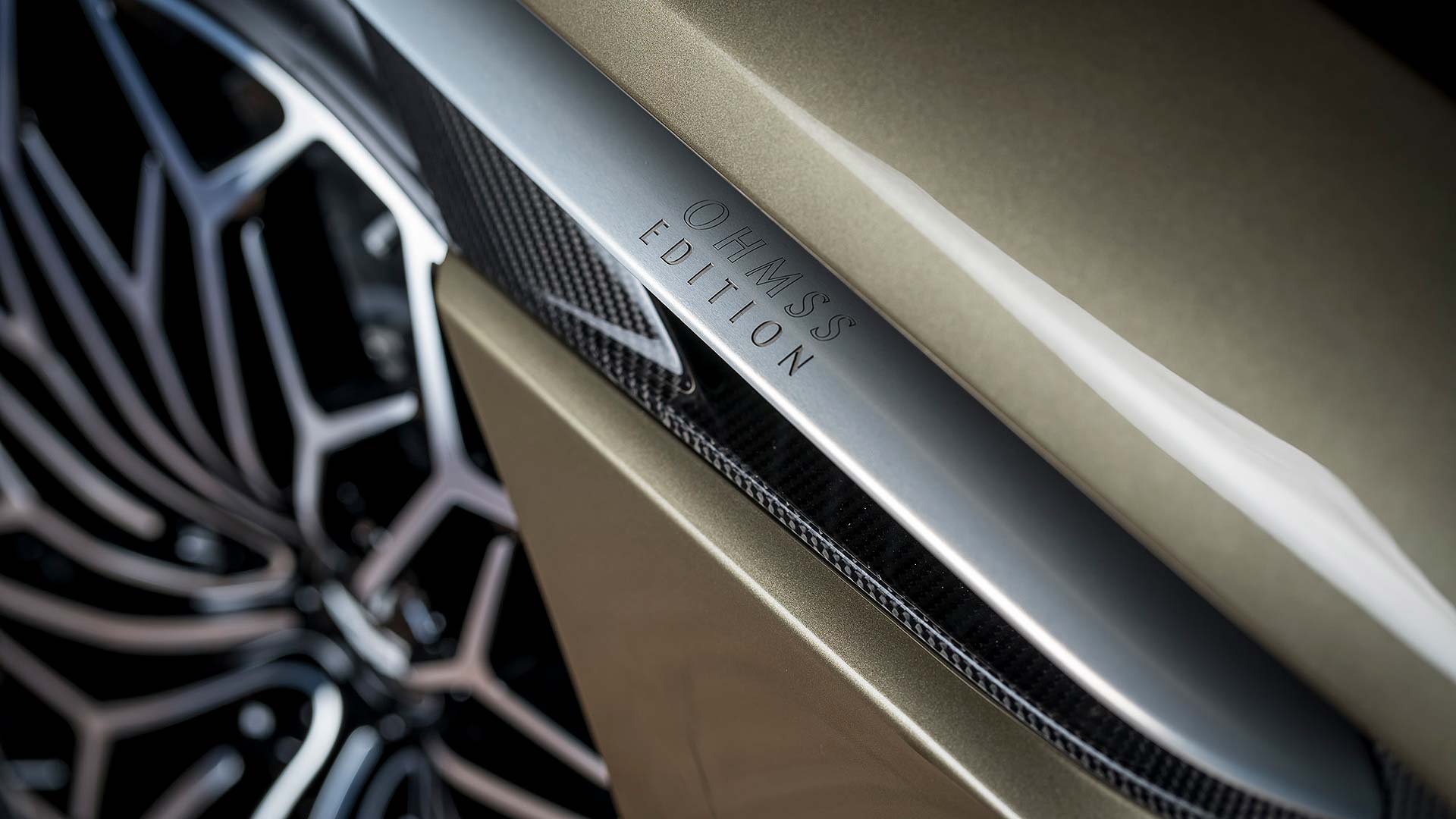 The side strakes are brushed alloy set in carbon fibre, with ‘OHMSS EDITION’ etched in to the metal. Just because this is a homage to a classic, it doesn’t mean you escape lashings of carbon…

For Your Eyes Only 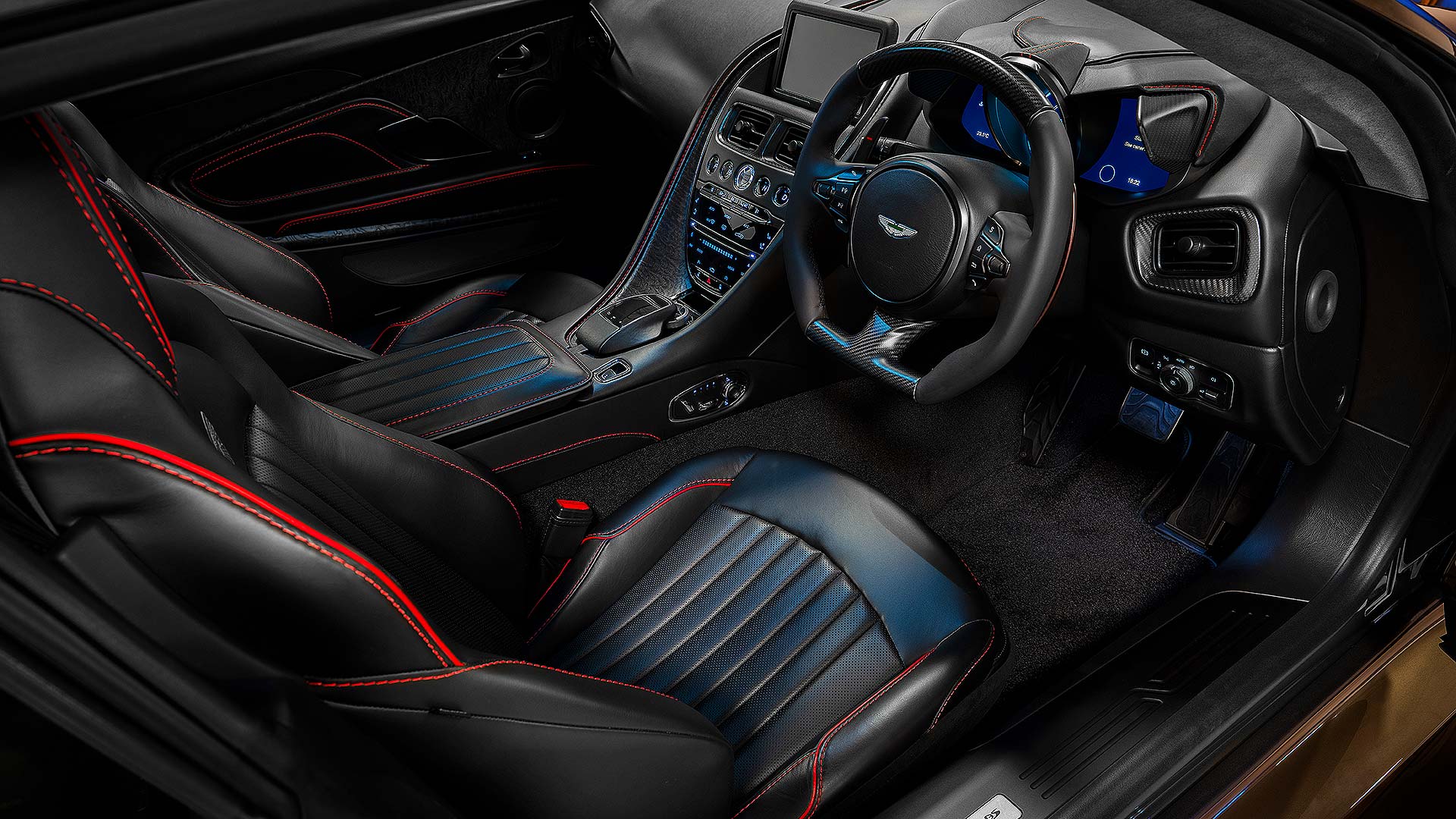 On the inside, this very special DBS is colored to match the 1969 car, with pure black leather and grey-blend Alcantara (man-made suede).

Flashes of red pay tribute to the red-trimmed glovebox of Bond’s original DBS, which carried his telescopic rifle. These include the stitching, leather pipework, carbon gearshift paddles and door pockets. 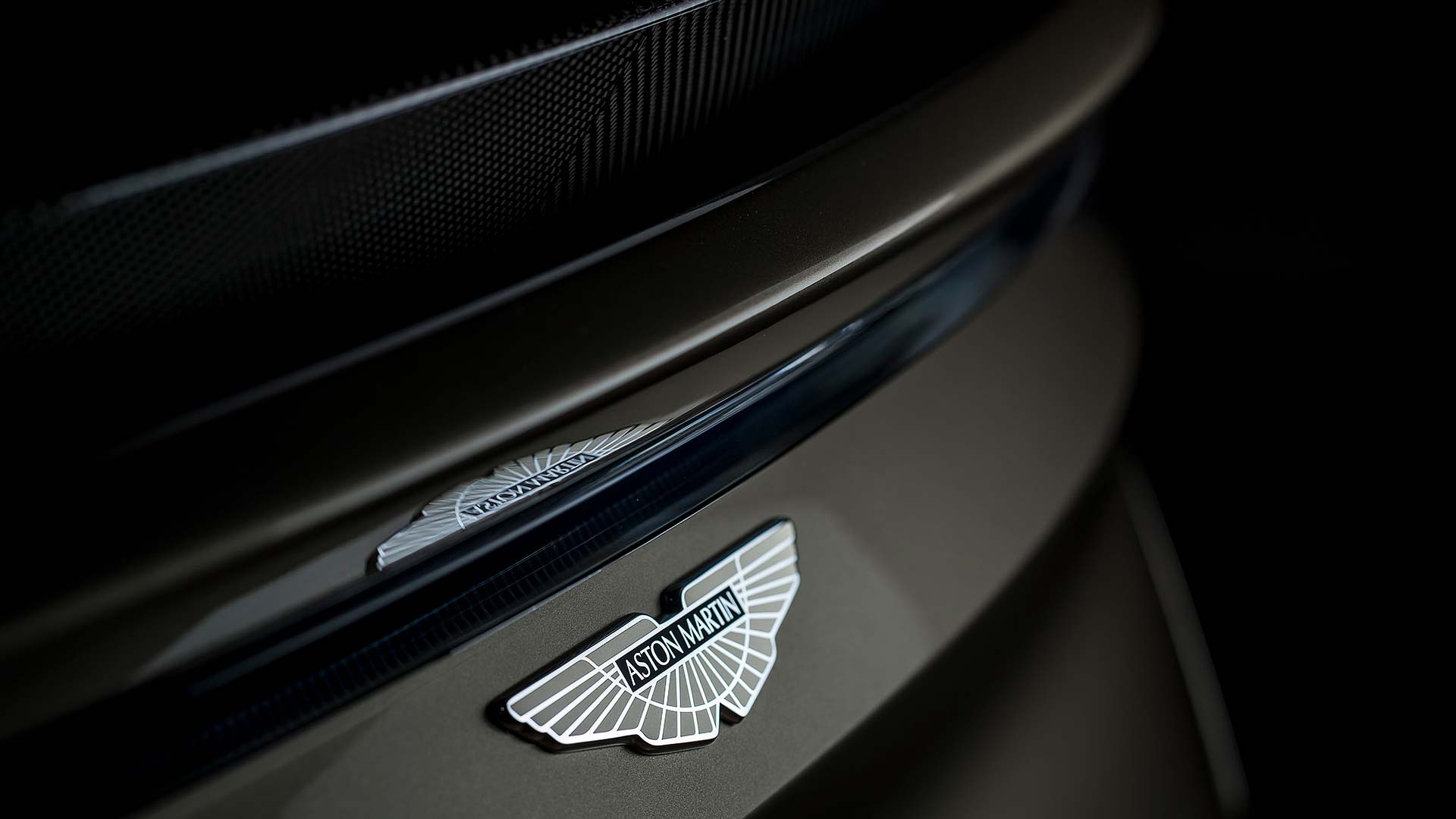 Optional on the OHMSS is a bespoke drinks case that fits perfectly in the boot, with space within for two bottles of champagne and four flutes. Black on the outside and red within, it’s also a nod to Bond’s gun-holding glovebox.

Even the price pays homage to the world’s most famous secret agent. You might need to be On Her Majesty’s Secret Service to afford it, too. Yours, Mr Bond, for £300,007, and not a penny less, with delivery expected towards the end of 2019.

The boss’s stamp of approval 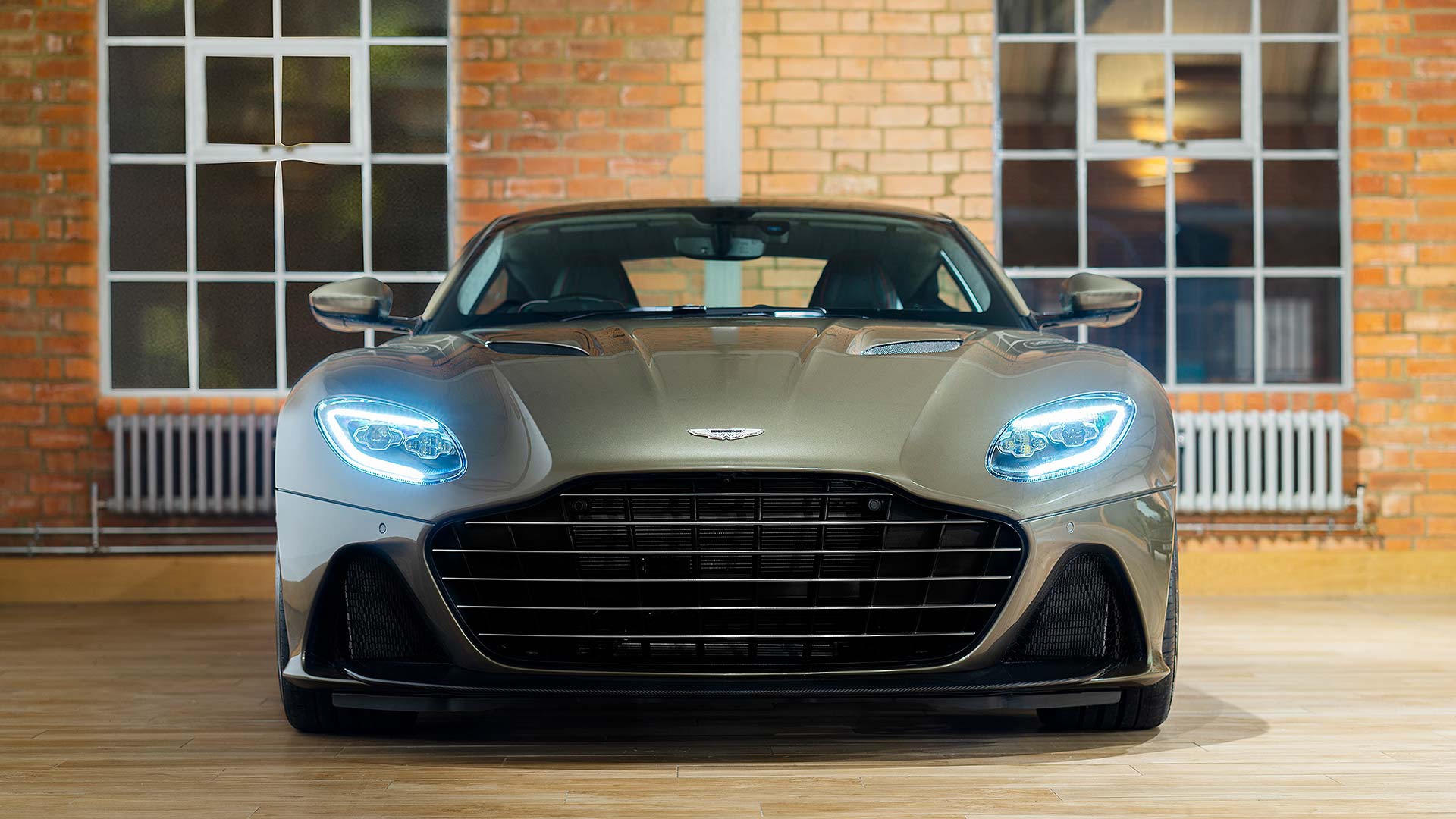 “Aston Martin is synonymous with James Bond and the DBS from On Her Majesty’s Secret Service has provided great inspiration to the team tasked with creating this very special edition,” said Aston Martin CEO, Andy Palmer. 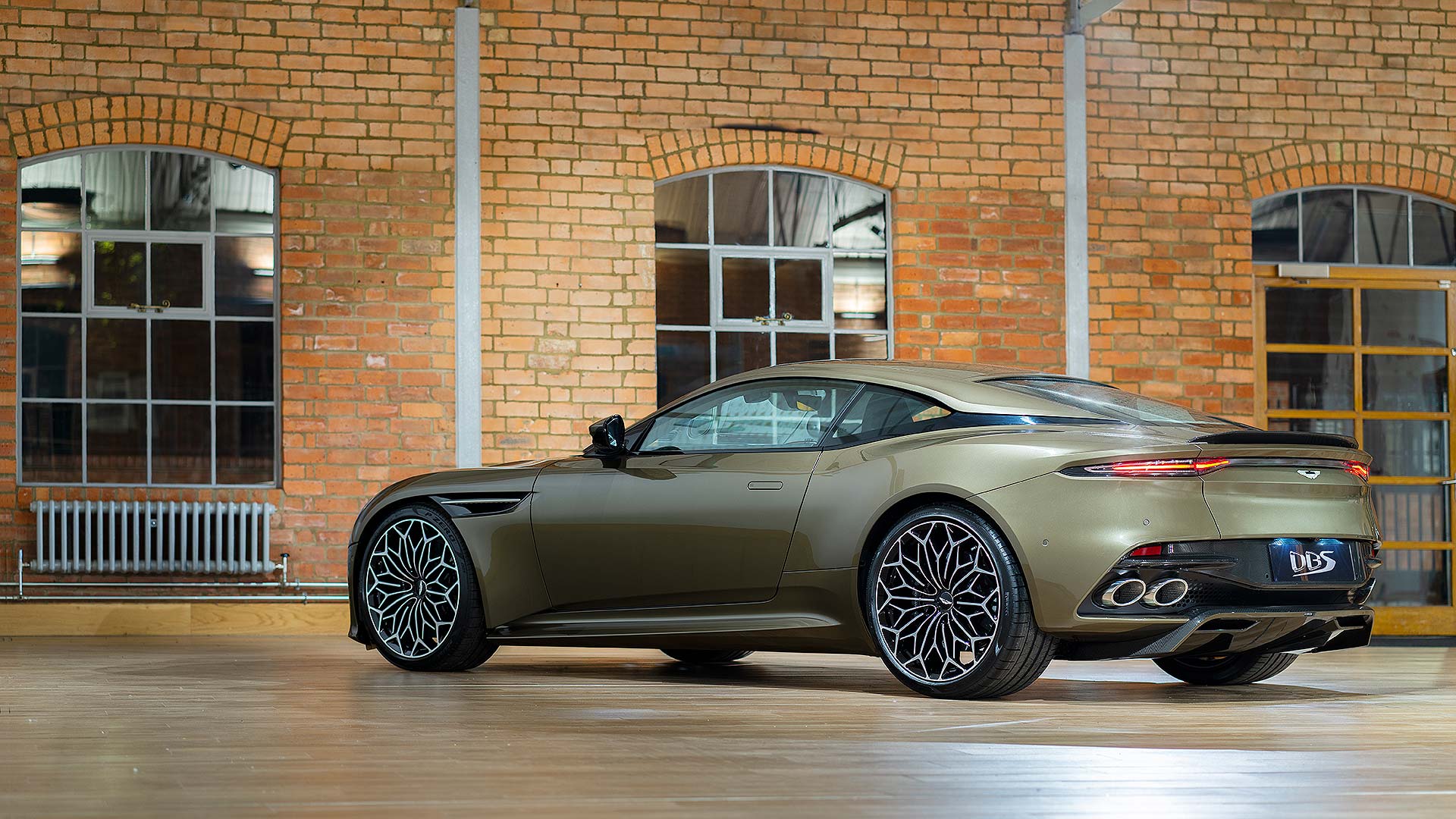 “This new DBS Superleggera will be an extremely distinguished ‘brute in a suit’, designed to capture the essence of the iconic DBS from the 1969 film, but with a 5.2-liter twin-turbo V12!”

Needless to say, this isn’t the first time a special Aston has been created in tribute to 007. The DBS OHMSS joins the (ongoing) DB5 continuation and the 2015 DB9 GT Bond Edition. 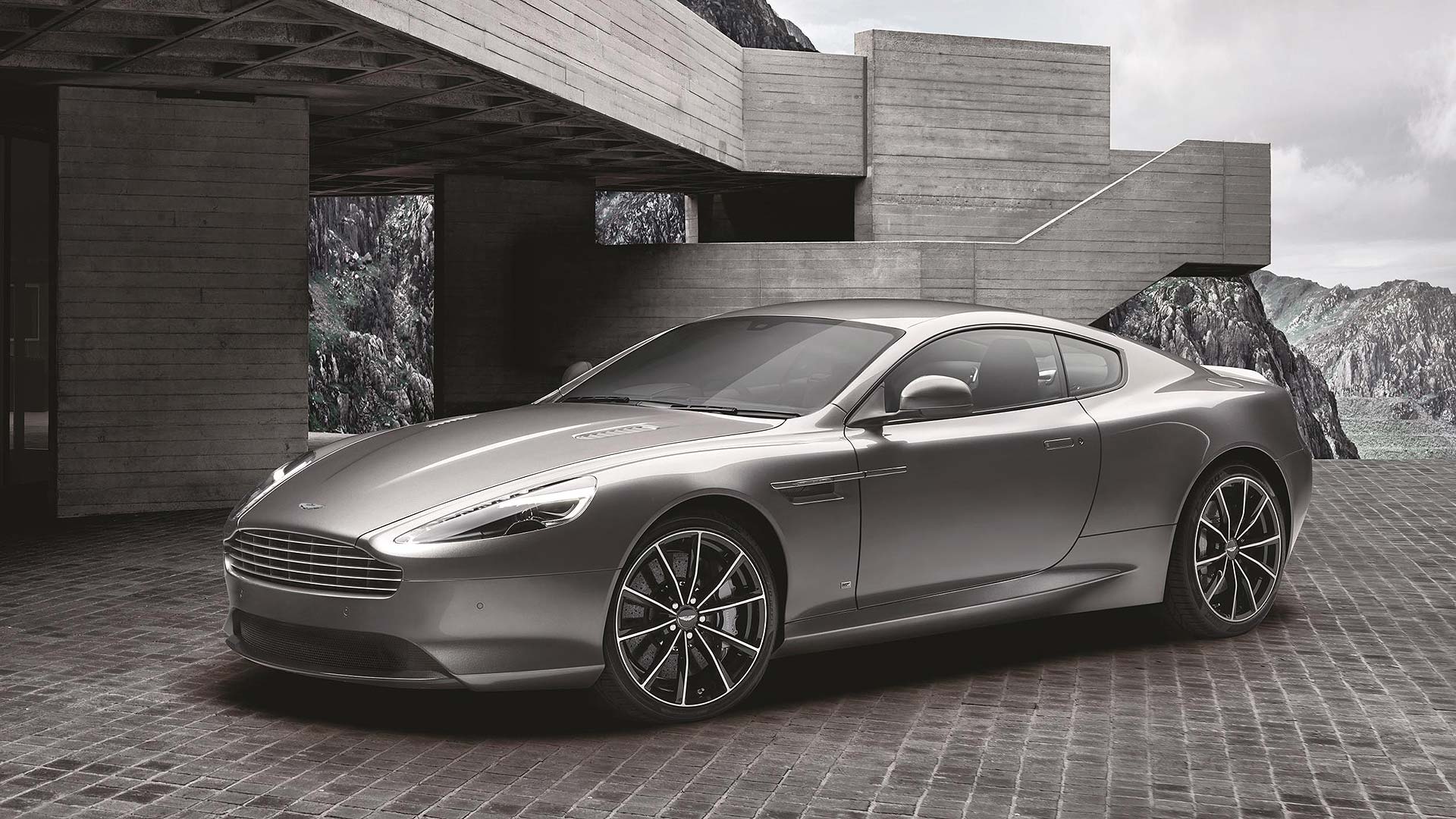