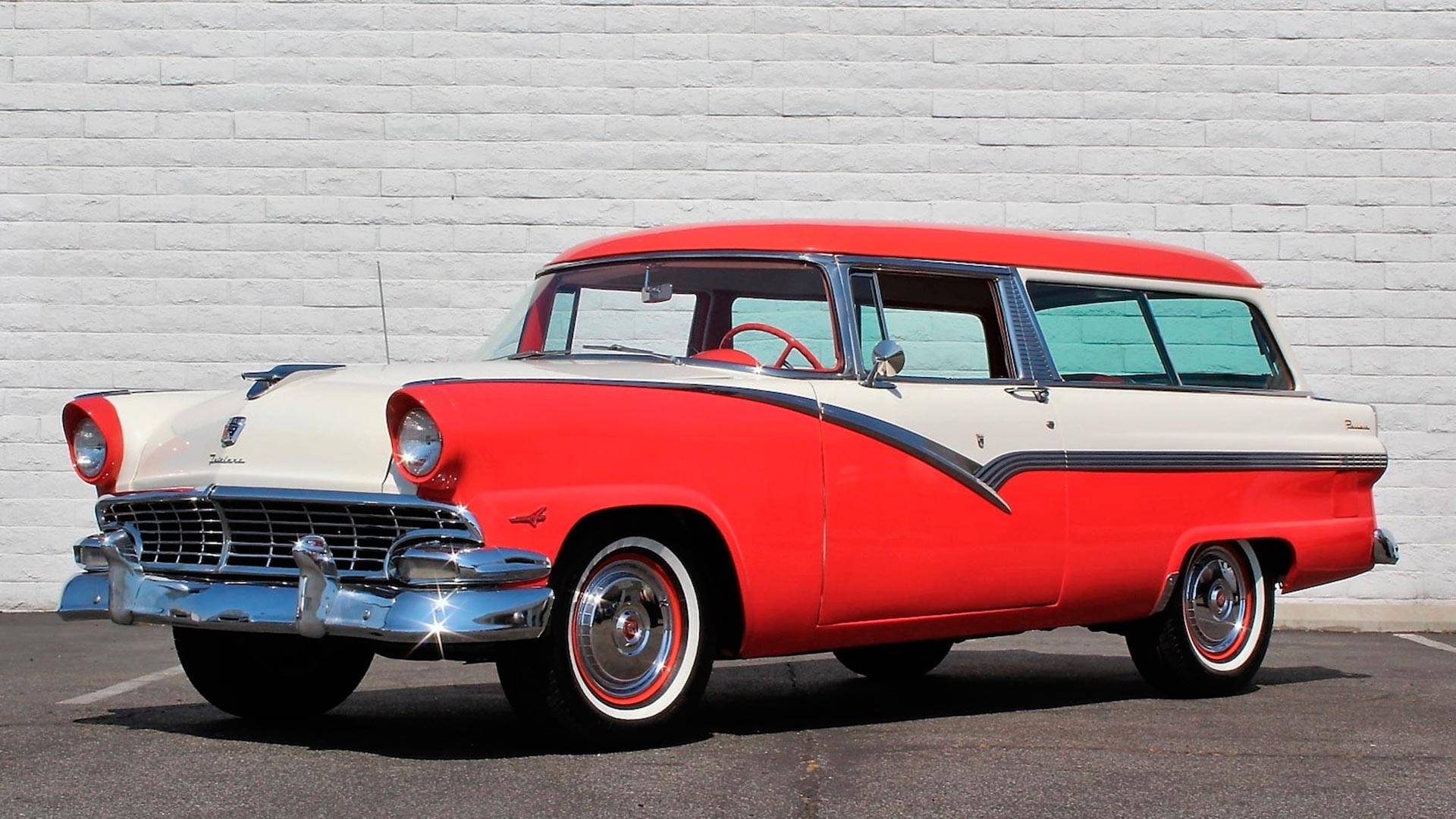 The Pacific Northwest is said to love station wagons, and the upcoming Mecum Auctions sale in Portland, Oregon is doing nothing to dispel the myth.

Up to 500 collector cars are scheduled to roll across the block on June 21st to 22nd, and a variety of classic wagons are already filling up the lot list.

Below are five estates making their way along the Oregon Trail, and proving that the fondness for wagons is still alive and well in Cascadia. 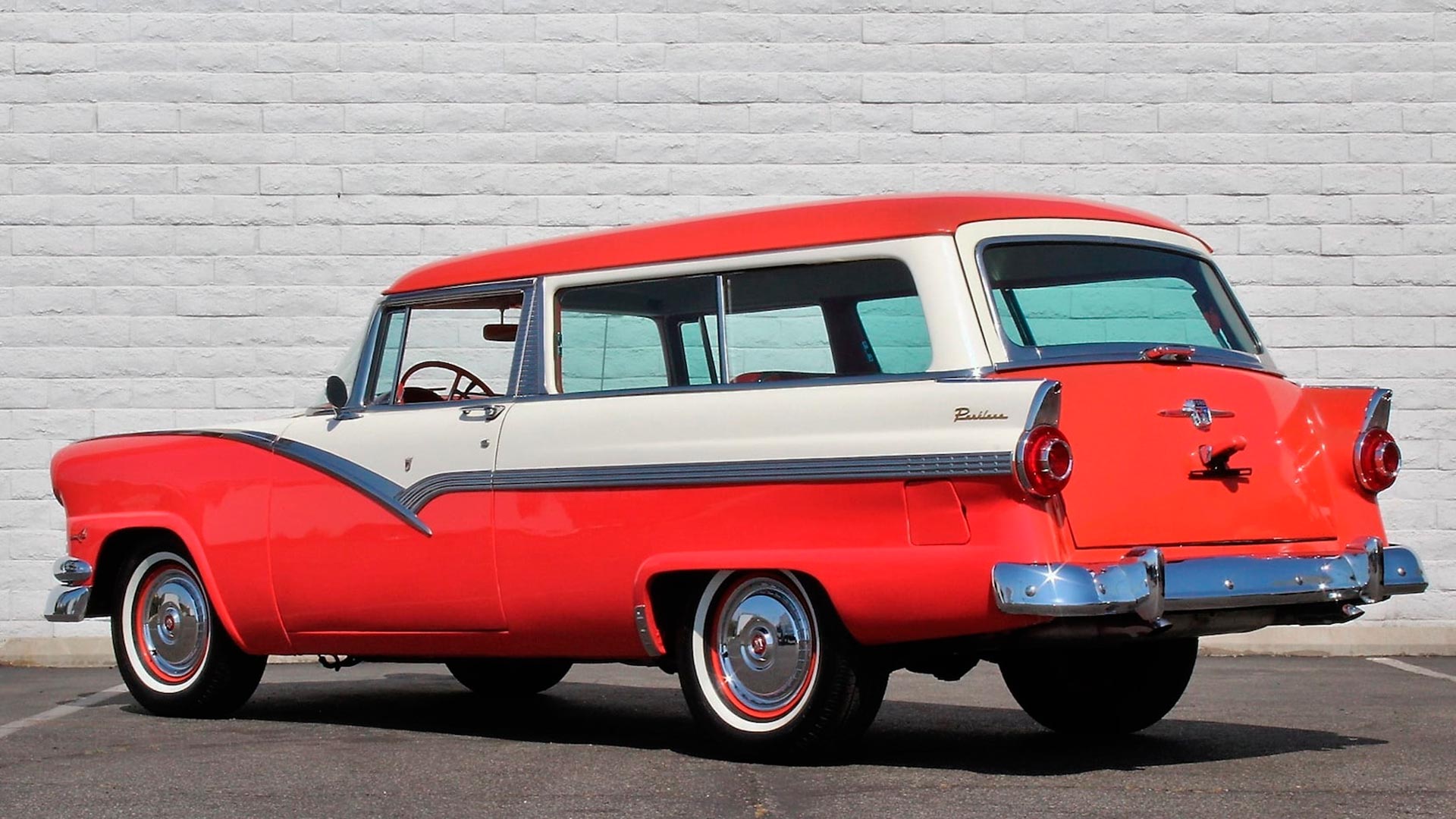 Built for one year only, the two-door Ford Parklane was equivalent to the full-size Fairlane luxury offerings. That meant an upmarket six-seater interior, along with the same brightwork attached to the bodywork as the Fairlane.

Ford had launched the Parklane in response to the ‘55 Chevrolet Nomad, but abandoned production due to a lukewarm reception. It makes this car just one of 15,186 built during that single year. 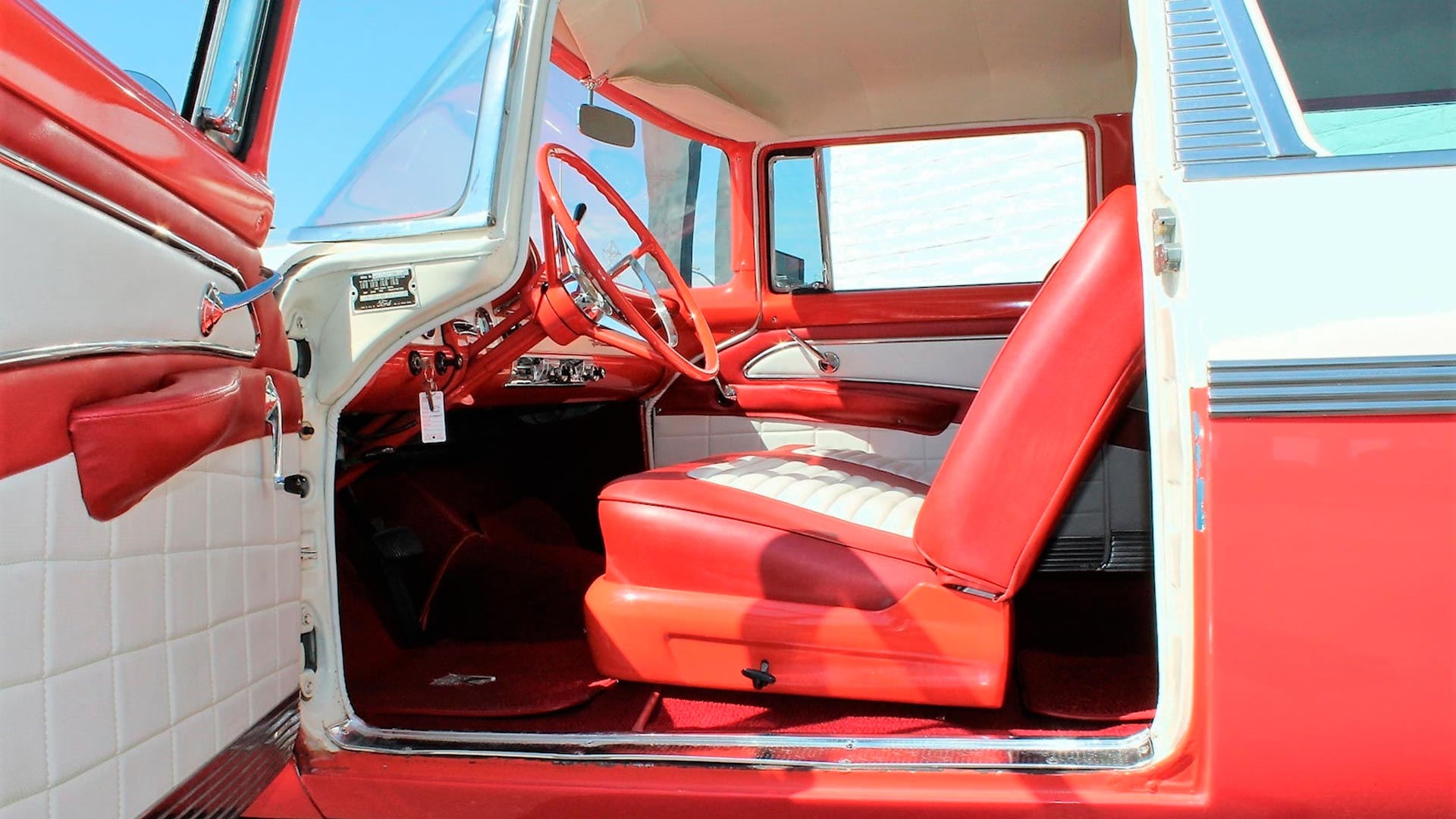 This car has the 292-cubic inch ‘Thunderbird’ V-8 engine, rated at 202 horsepower when it left the factory. Driving the rear wheels is a Ford-O-matic transmission, whilst the engine bay features chrome elements from a 1957 Thunderbird.

The eye-catching red and white theme continues throughout the interior, adding to the 1950’s vibe. The relative rarity means this could be an interesting alternative to contemporary choices such as the Fairlane or Thunderbird. 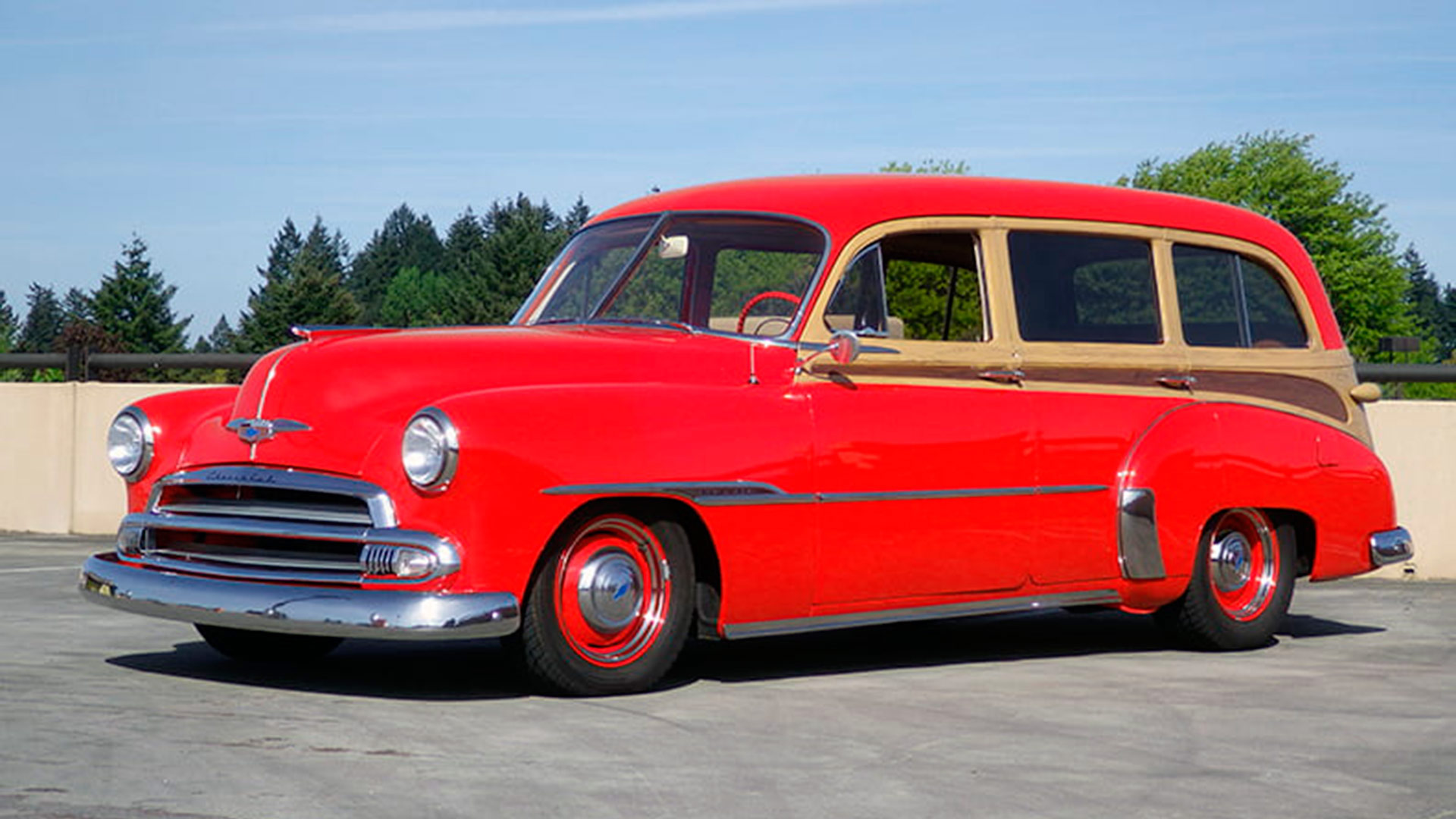 Although the Nomad may be the Chevrolet wagon from the 1950s which gets all the attention, General Motors was building estates years before the two-door hero appeared.

Positioned at the higher-end of the Chevrolet range, Deluxe models included a full range of two- and four-door body styles. Capable of seating up to eight, the rear seats could be removed from the station wagon version for extra cargo space. 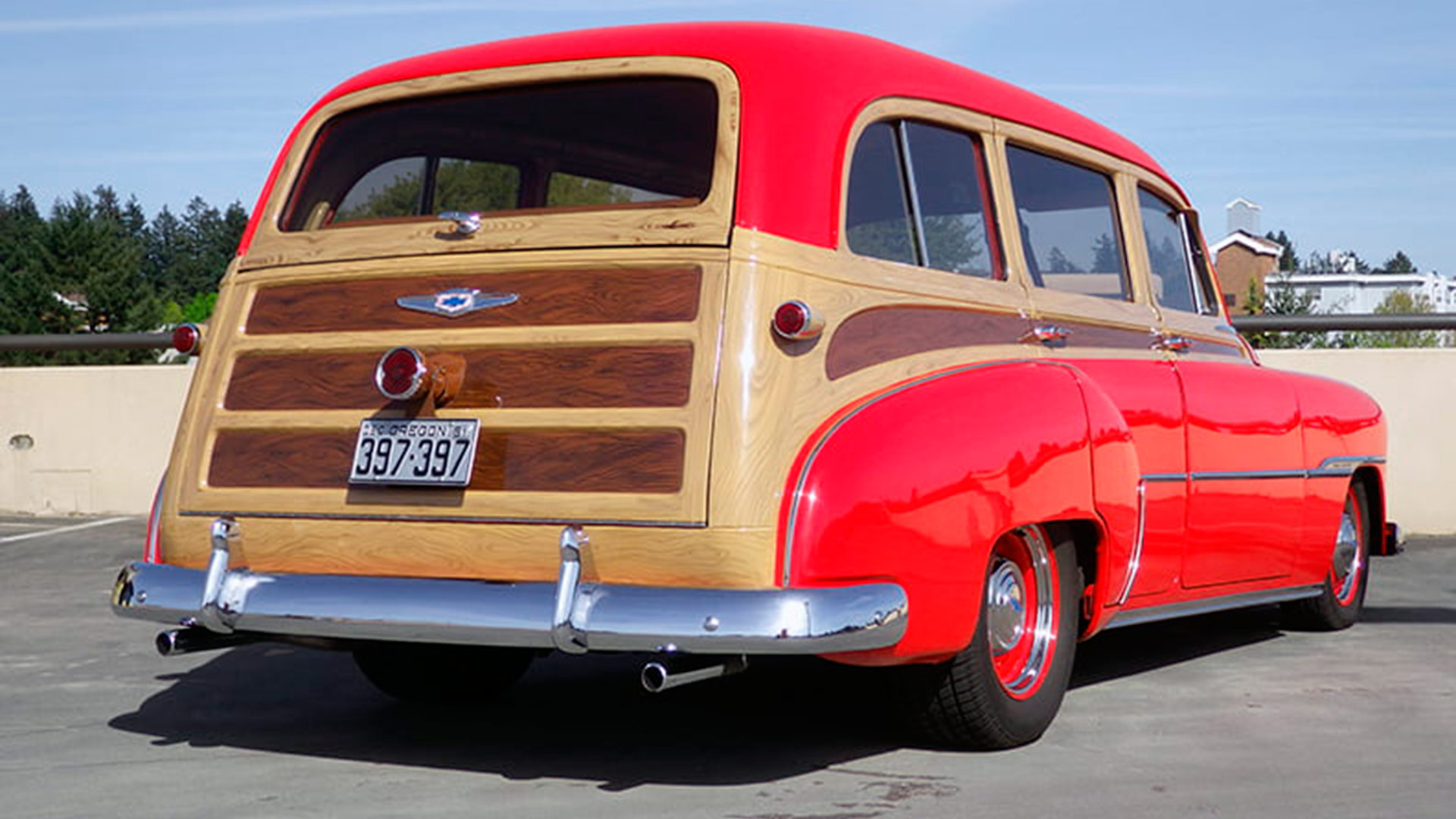 Whilst period Deluxe cars featured six-cylinder engines, this car has rather more power under the hood. A 350-cubic inch V-8 has been lifted from a 1969 Chevrolet Nova, along with the front suspension and automatic transmission, making it a real custom machine.

The three-row original seating is retained, giving the future owner the chance to scare multiple people at the same time. This particular car has been a winner at the Forest Grove Concours d’Elegance event, along with picking up other best modified awards. 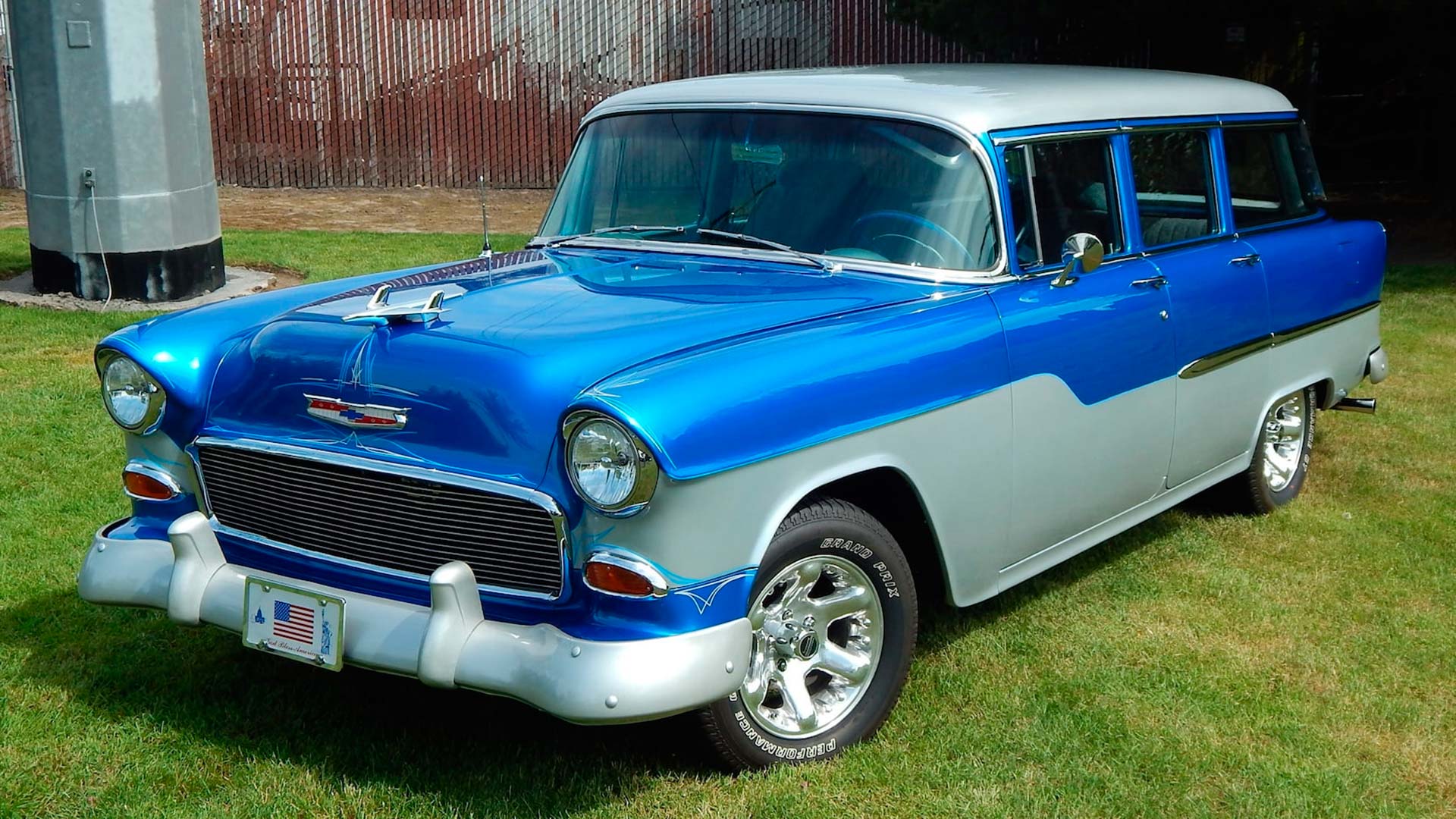 No detail has been left untouched on this four-door 210 station wagon, with an obvious custom style of its own. Subject to a full restoration, the current owner has added a number of important upgrades and options to this car.

A 283-cubic inch V-8 from a 1959 Corvette provides the horsepower, with an Edelbrock 4-barrel carburettor and intake also added. The distributor and coil pack have  been upgraded, along with ‘ram horn’ exhaust manifolds. 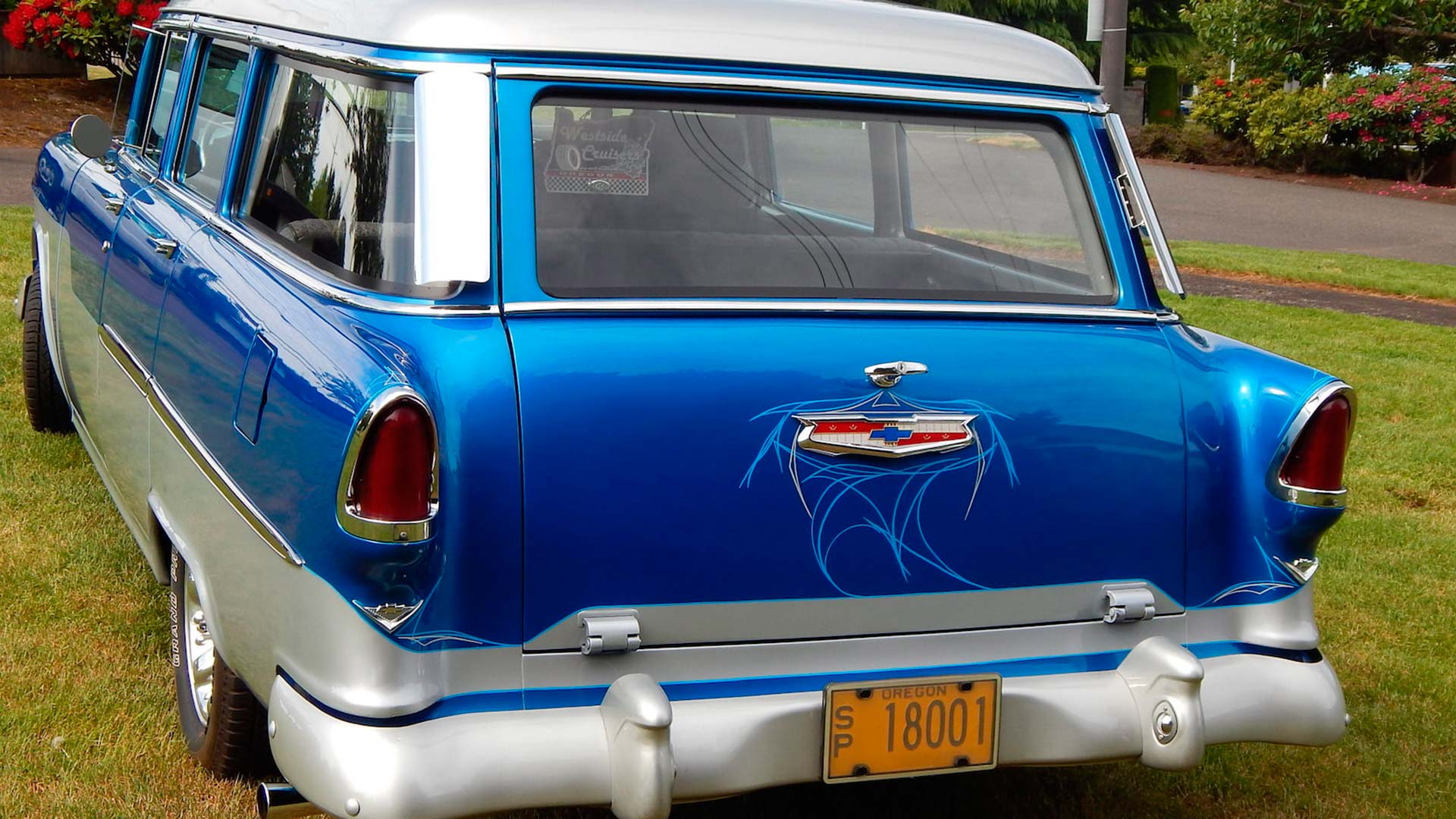 An impressive digital dash adds functionality but retains classic looks, whilst the steering wheel has been finished to match the exterior paintwork. Retrimmed throughout in gray cloth, the interior has room for six.

Launched in 1955, the second-generation Chevrolet 210 range saw the launch of a new chassis, along with the introduction of the small-block V-8 engine. 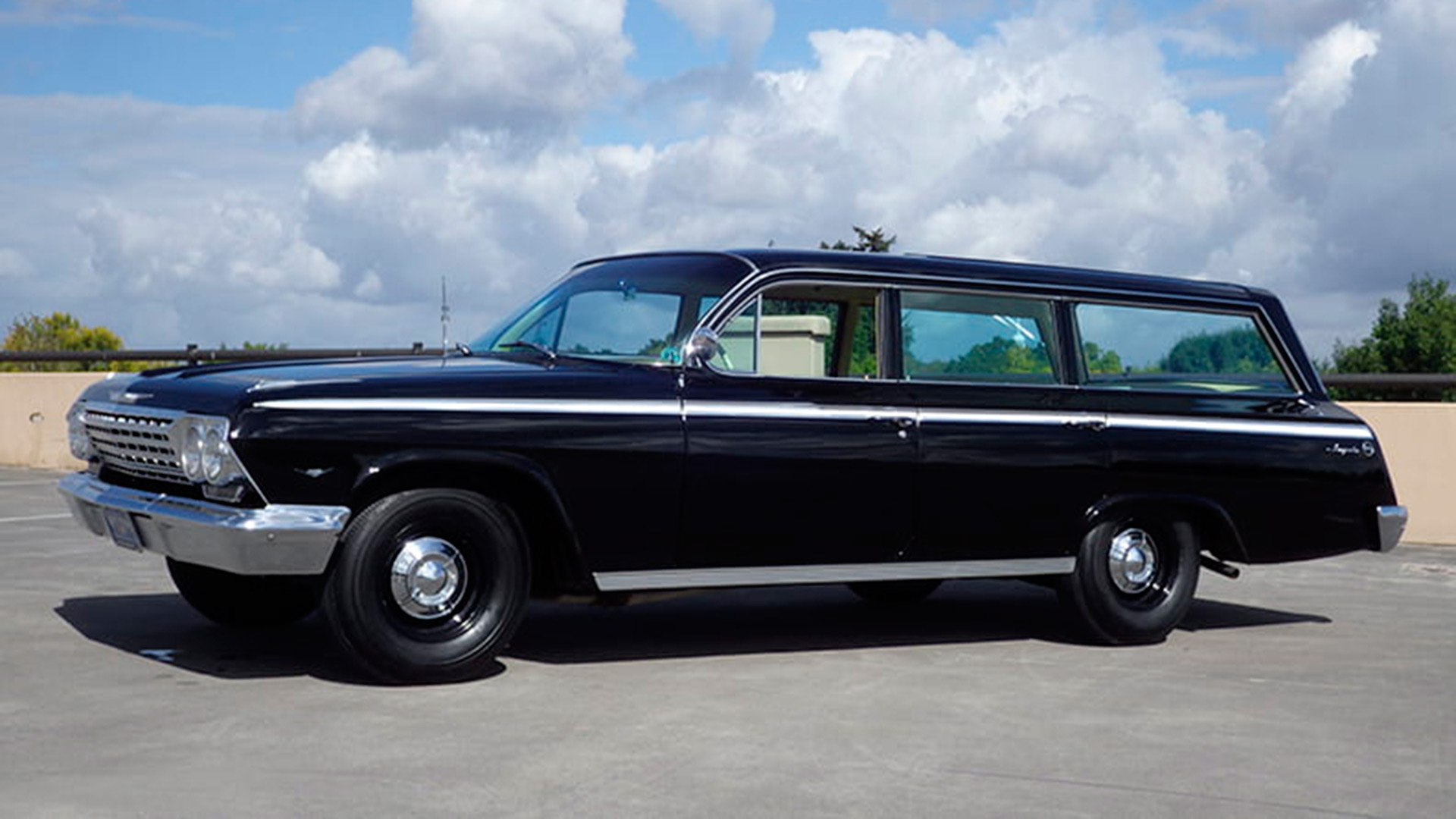 Mecum Auctions currently has few details on this Impala station wagon. Most important is that this has covered just 16,545 miles in more than five decades, and is in unrestored form.

The latter is especially impressive, given that this Chevy looks to be in superb condition from the supplied photographs. Inside, it certainly looks like a car which has covered an average of less than 300 miles each year. 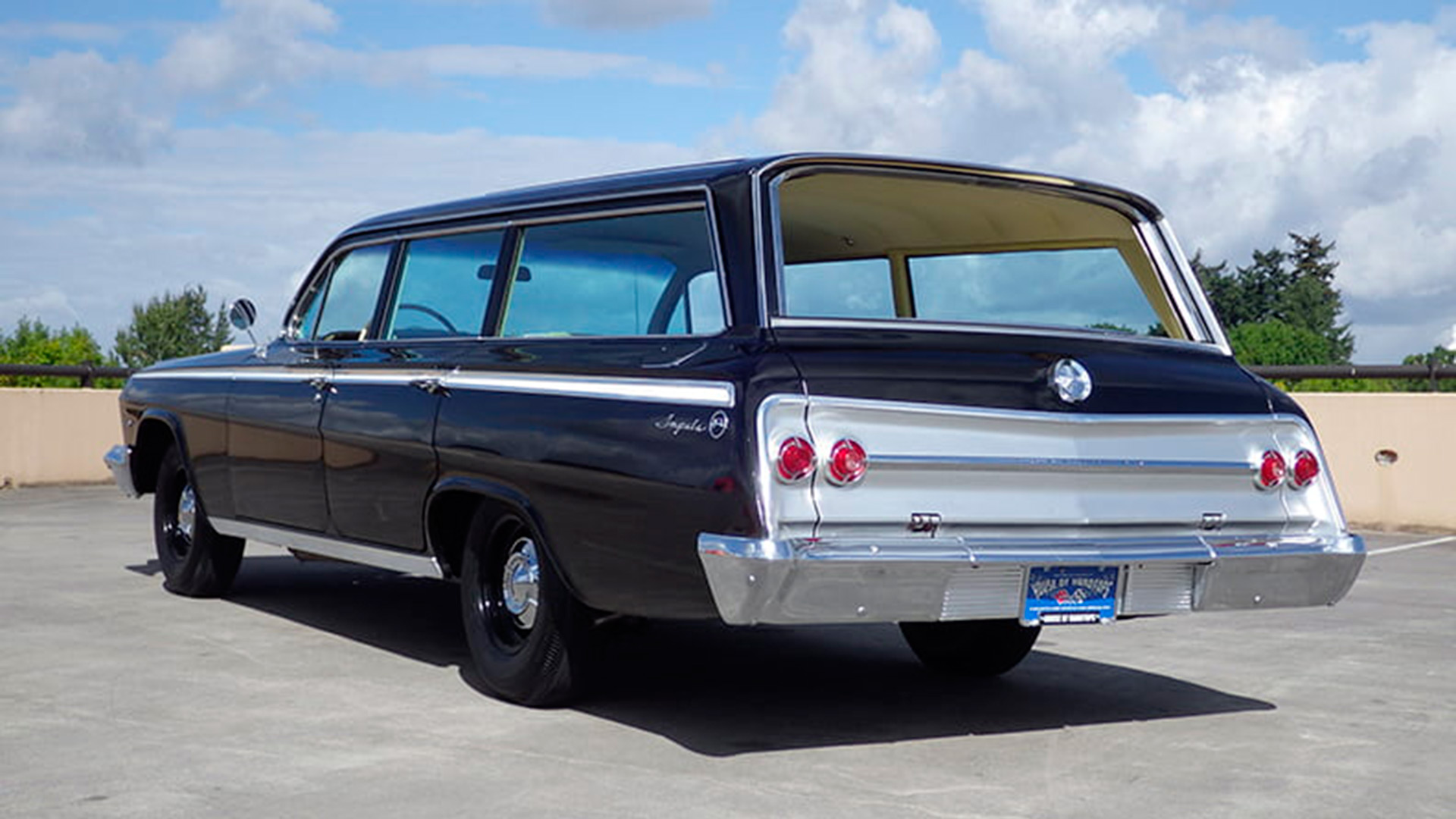 Beneath the hood is what looks to be a 283-cubic inch ‘Turbo Fire’ V-8 engine. That would mean a total of 170 horsepower, with a focus more on fuel economy rather than outright performance.

Chevrolet offered the Impala station wagon in both six- and nine-seater layouts, with this example being the slightly less accommodating version. Buyers of the 1962 model were surely delighted with the standard-fit electric clock, back-up lights, and extra-long arm rests. 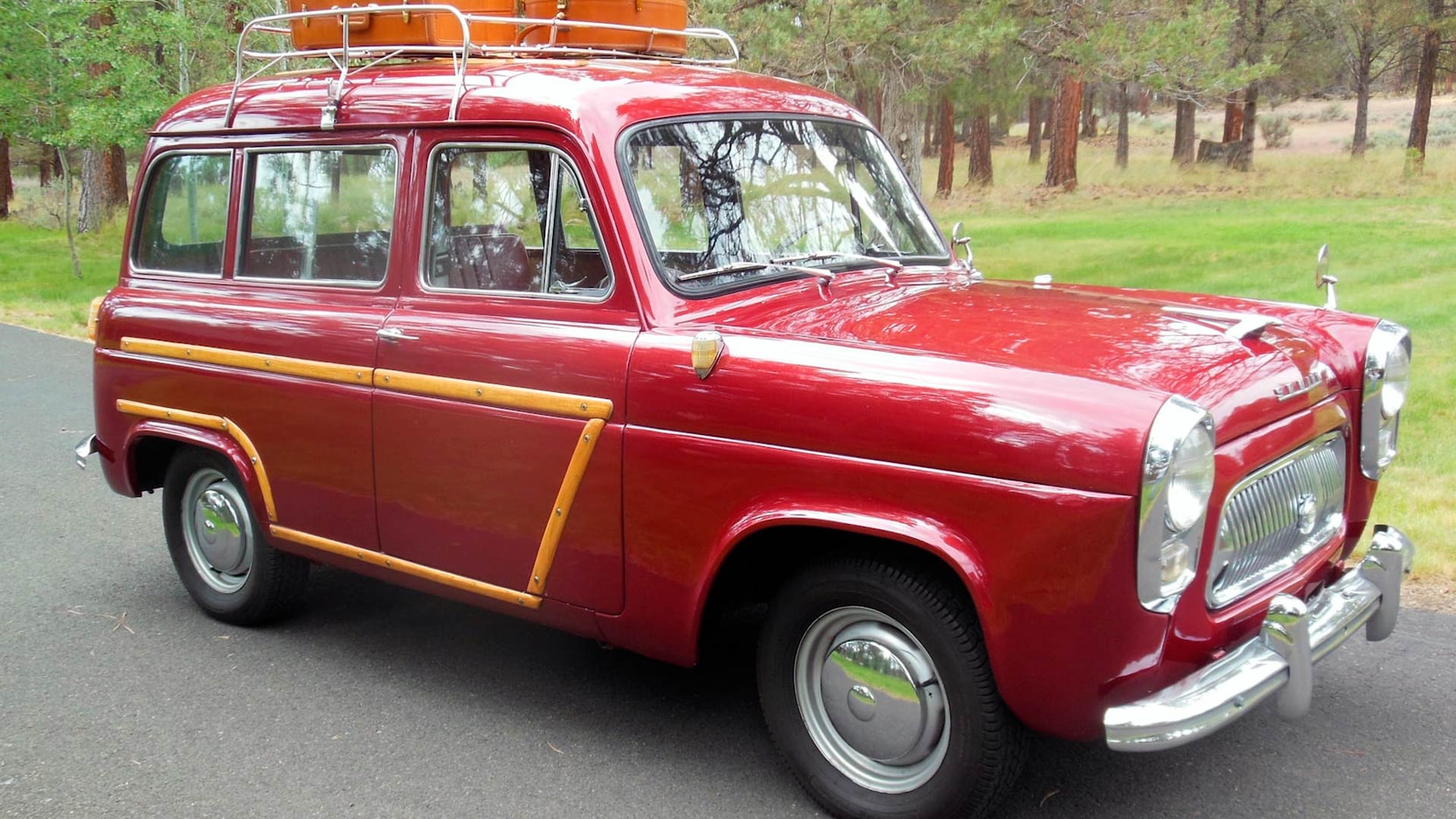 Don’t be fooled by the name. This is not a full-size Ford Country Squire that has somehow shrunk in Pacific Northwest precipitation.

Ford UK, perhaps inspired by their bigger American cousins, sold the Squire estate between 1955 and 1959. With two-doors and four seats, the Squire was a more practical variant of the 100E sedan. 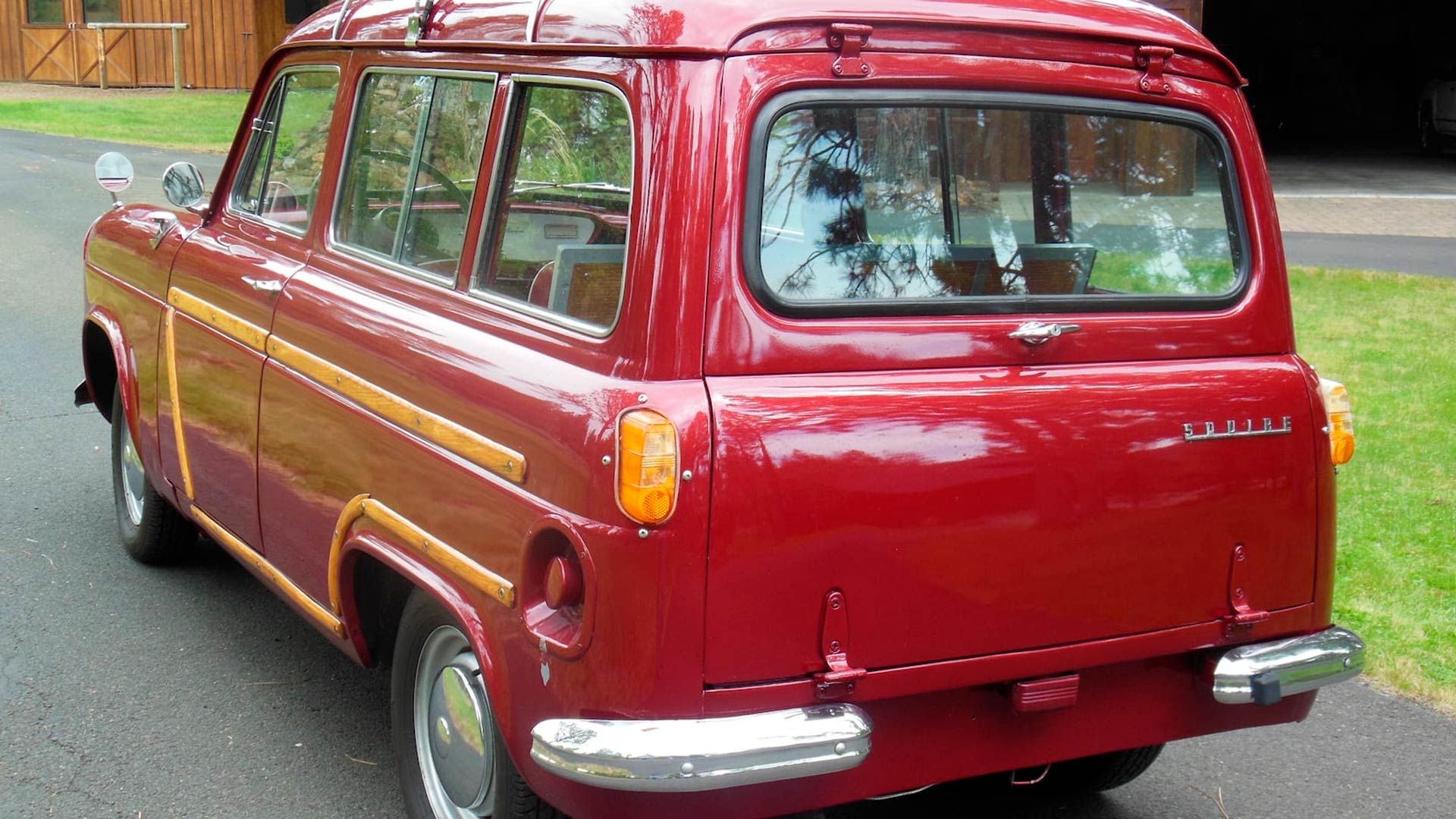 Whilst it may have imitated real woodie wagons with timber trim, performance was still suitably European. Just 36 horsepower came from the 1.1-liter four-cylinder engine, driving the rear wheels through a three-speed manual transmission.

Top speed was recorded as 70mph, with acceleration best measured using a calendar. It might not be quick, but it would certainly make a quirky addition to any car collection. Oh, and that vintage luggage rack is also included in the sale!

We’ll have to wait and see which station wagon brings the most money, when bidding opens on Friday June 21st at the Portland Expo Center.