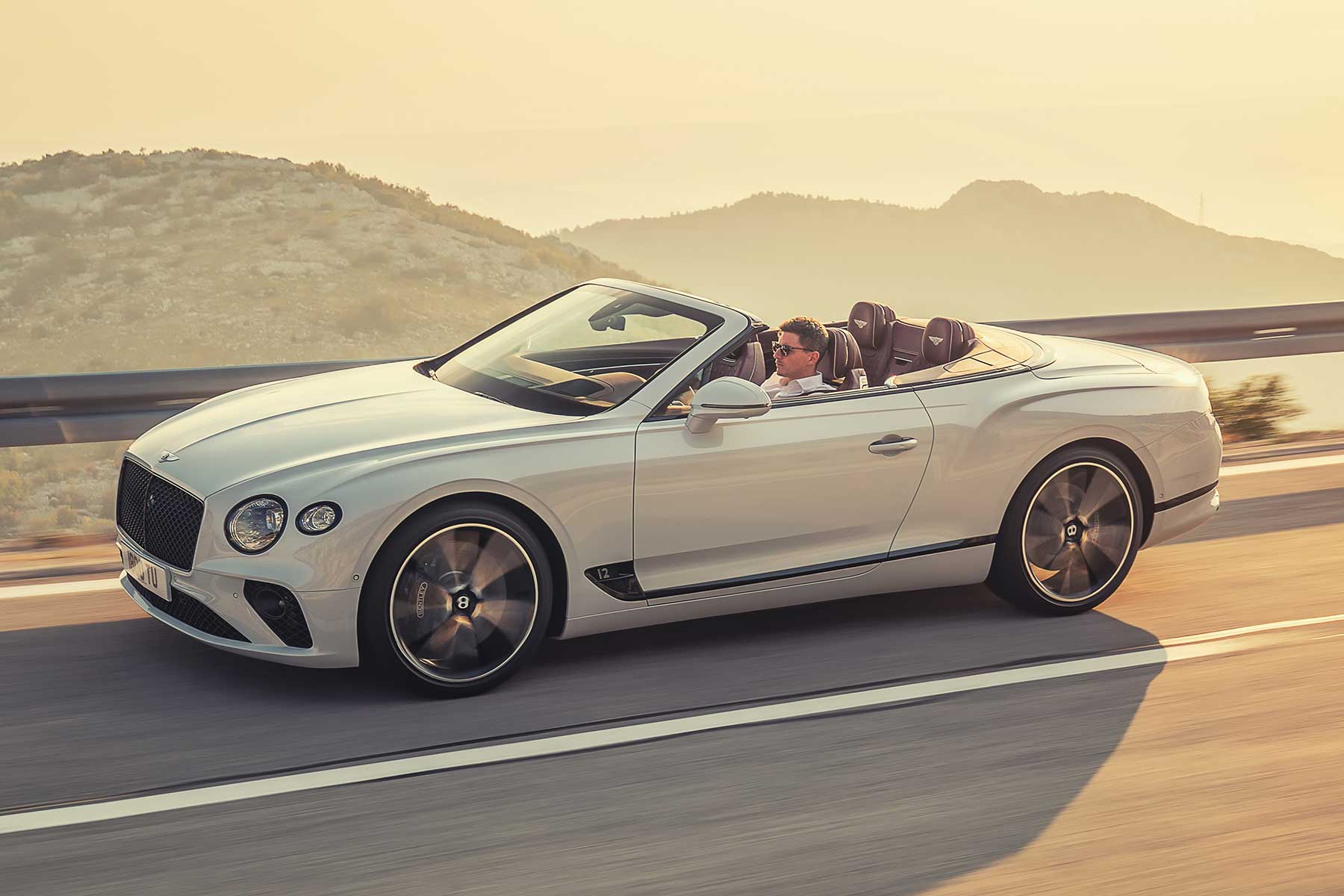 ﻿The new Bentley Continental GT Convertible is an open-top car that’s so refined, Bentley says it’s as quiet inside as the coupe version of the old Conti GT. It’s also a 207mph drop-top four-seater that comes with a tweed fabric roof. 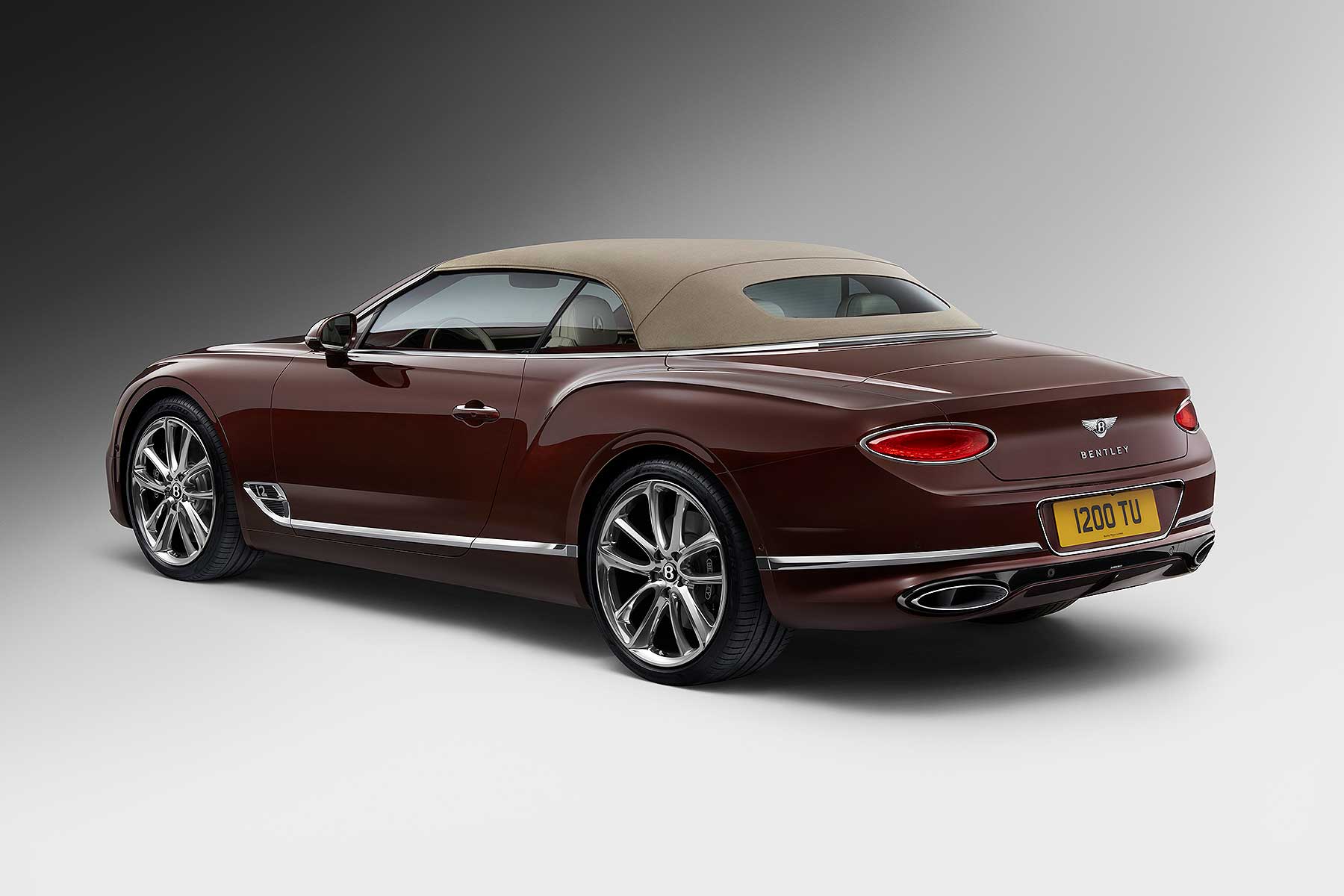 The luxury GT convertible sector is an exalted one, where cars are luxury goods considered alongside, say, works of art or jewellery. The new Continental GT Convertible thus has 10 square meters of (sustainable) wood veneer inside; 15 different choices of carpet; eight interior roof colour options (and seven outside); pillow knurling of the metal controls instead of machine knurling because it’s softer to hands. 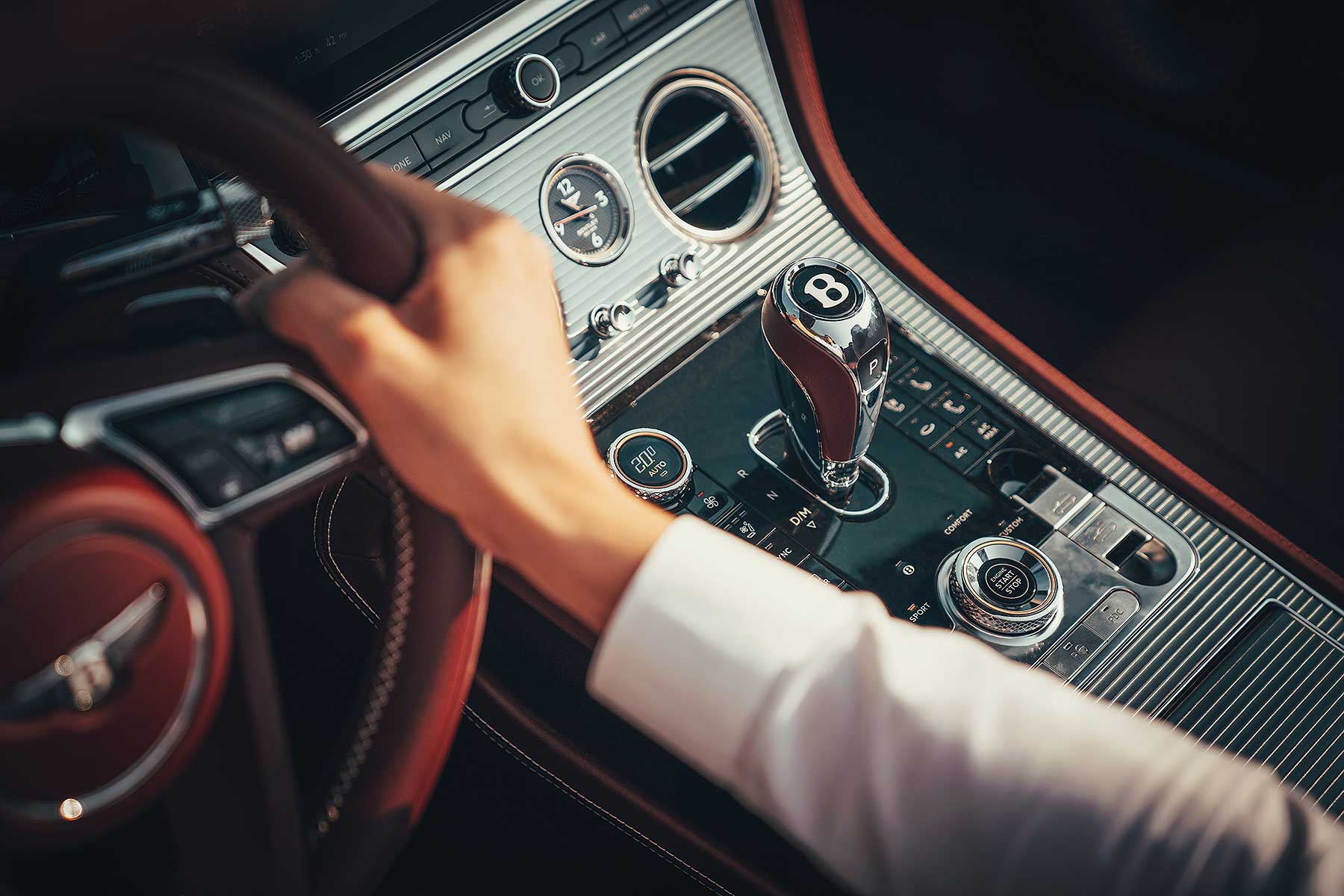 It also has heated seats, heated armrests and a new neck warmer system that’s warmer and quieter than before. The air outlets are built into the seats and have a chrome centre vane that’s styled to look like Bentley’s famous dash air vents.

Even the standard audio system has 10 speakers and 650 watts of power. A 16-speaker 1,500-watt B&O system is optional, as is Bentley’s trademark 18-speaker Naim audio with an astonishing 2,200 watts. 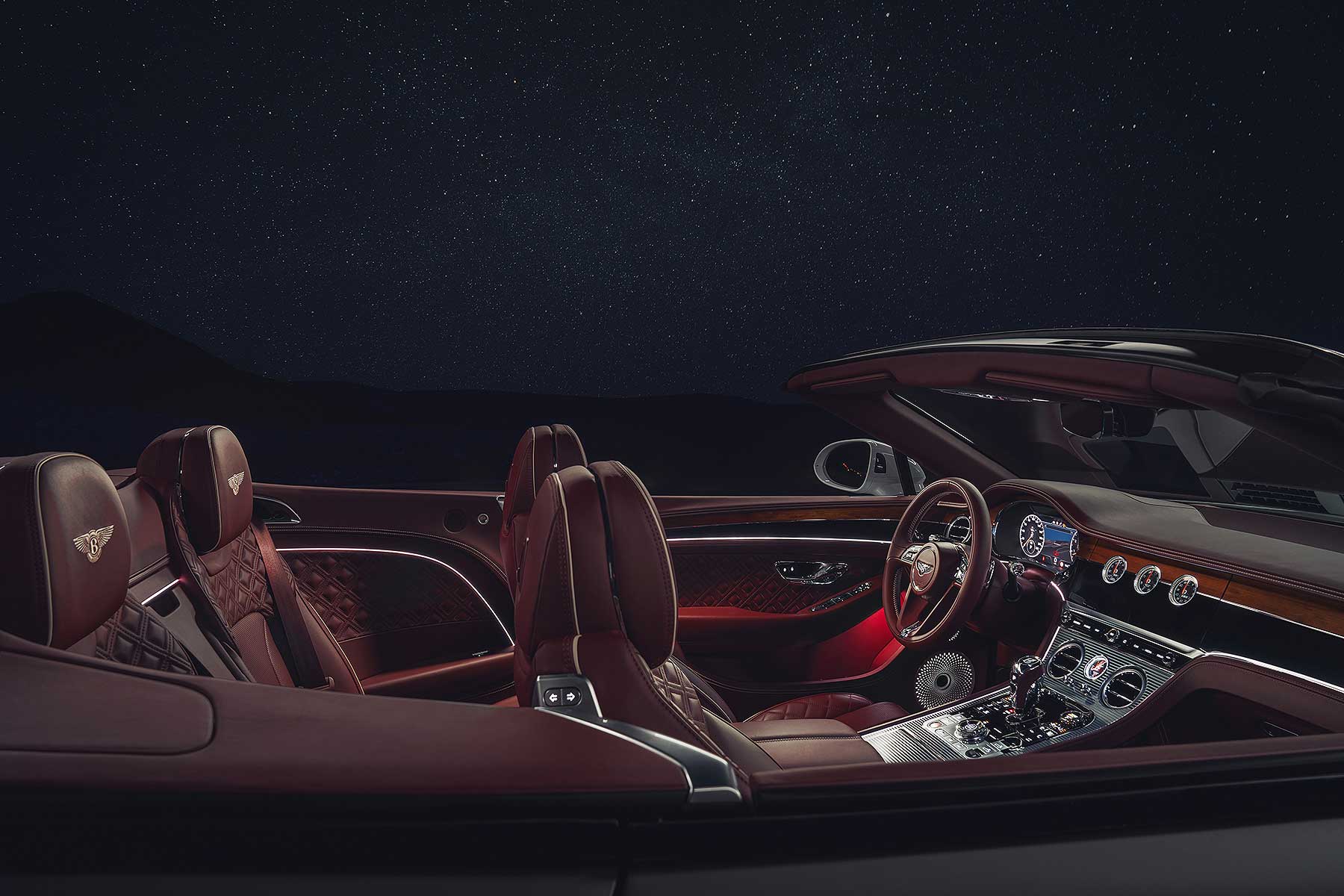 The dashboard design, says Bentley, ‘flows, like the Bentley badge’. The centre console is offered with a new type of mechanical finish that’s like the one used inside posh Swiss watches. Called Cotes de Genève, a 0.6mm-thick piece of aluminium is machined to create a 3D pattern. 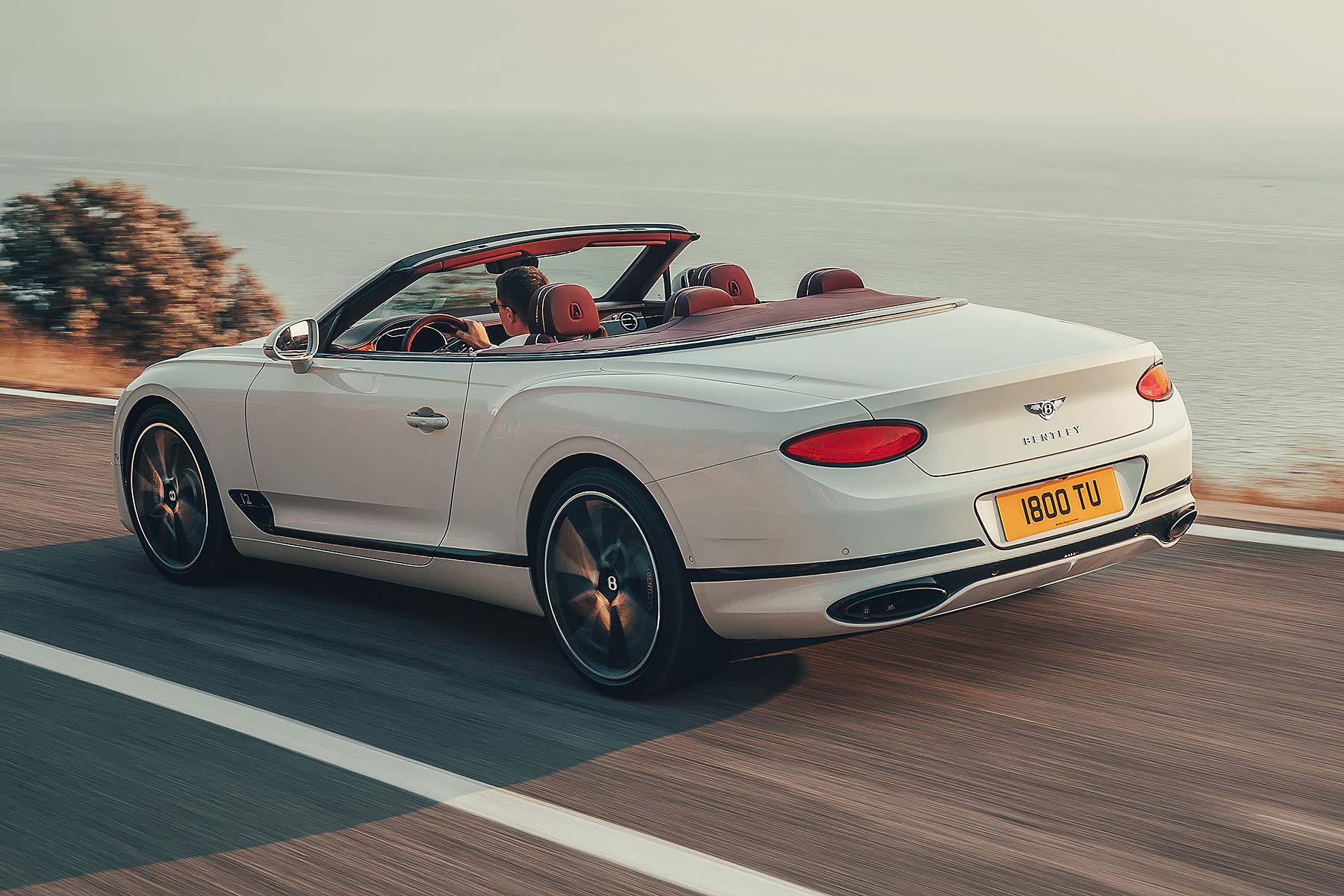 Bentley has fitted extended stop-start, which turns the engine off as the Continental GT Convertible comes to a halt, rather than when it’s completely stopped. The engine also has variable displacement – six of the 12 cylinders will turn off when demand is low, to save fuel. It’s undetectable, says Bentley.

It’s still a very heavy car, but the body is 20 percent lighter as well as 5 percent stiffer. Upgraded air suspension with 60 percent more air volume should give a plusher ride, and a 48-volt ‘Bentley Dynamic Ride’ roll control should make it more agile. 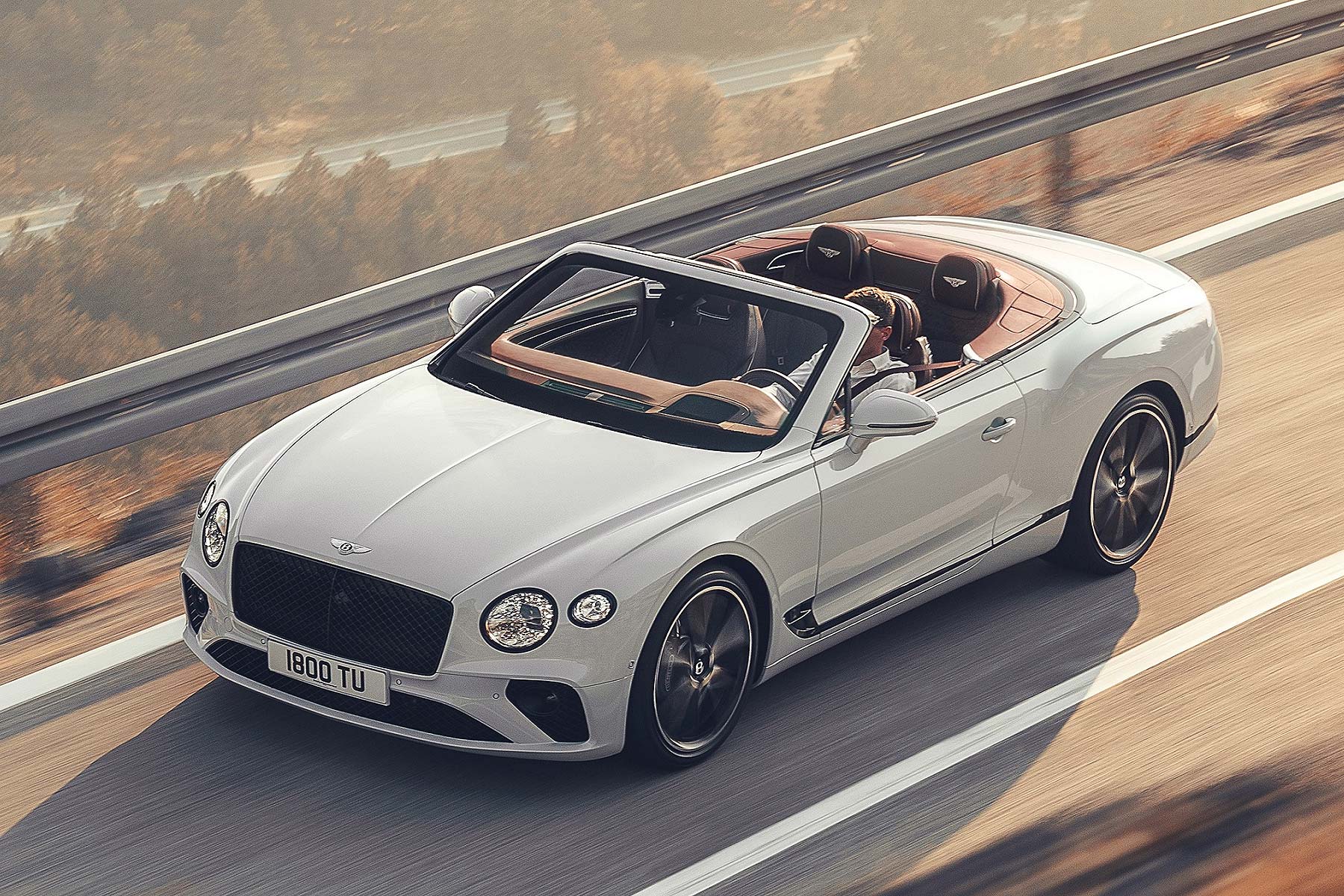 21-inch wheels are standard, 22-inches are optional and the Pirelli P Zero tyres are mixed: the rears are bigger than the fronts. They are noise-cancelling tyres, with a special filling in the sidewall to help refinement.

Behind them are ‘the most powerful brakes ever on a Bentley’. 420mm front discs are grabbed by 10 pistons (normal cars have one or two pistons in their calipers) and 380mm rear discs have four pistons each.

What does it look like? Sharper and more defined. The front wheels have moved 135mm forwards, and the bonnet is longer and lower, as is the car itself. Both headlights and tail lamps have cut diamond-style internals, ‘like an illuminated gem’.

Perfectly fitting for the new luxury good elite enthusiast will want to cross continents in next summer: for them, the new Bentley Continental GT Convertible is priced from £175,100.