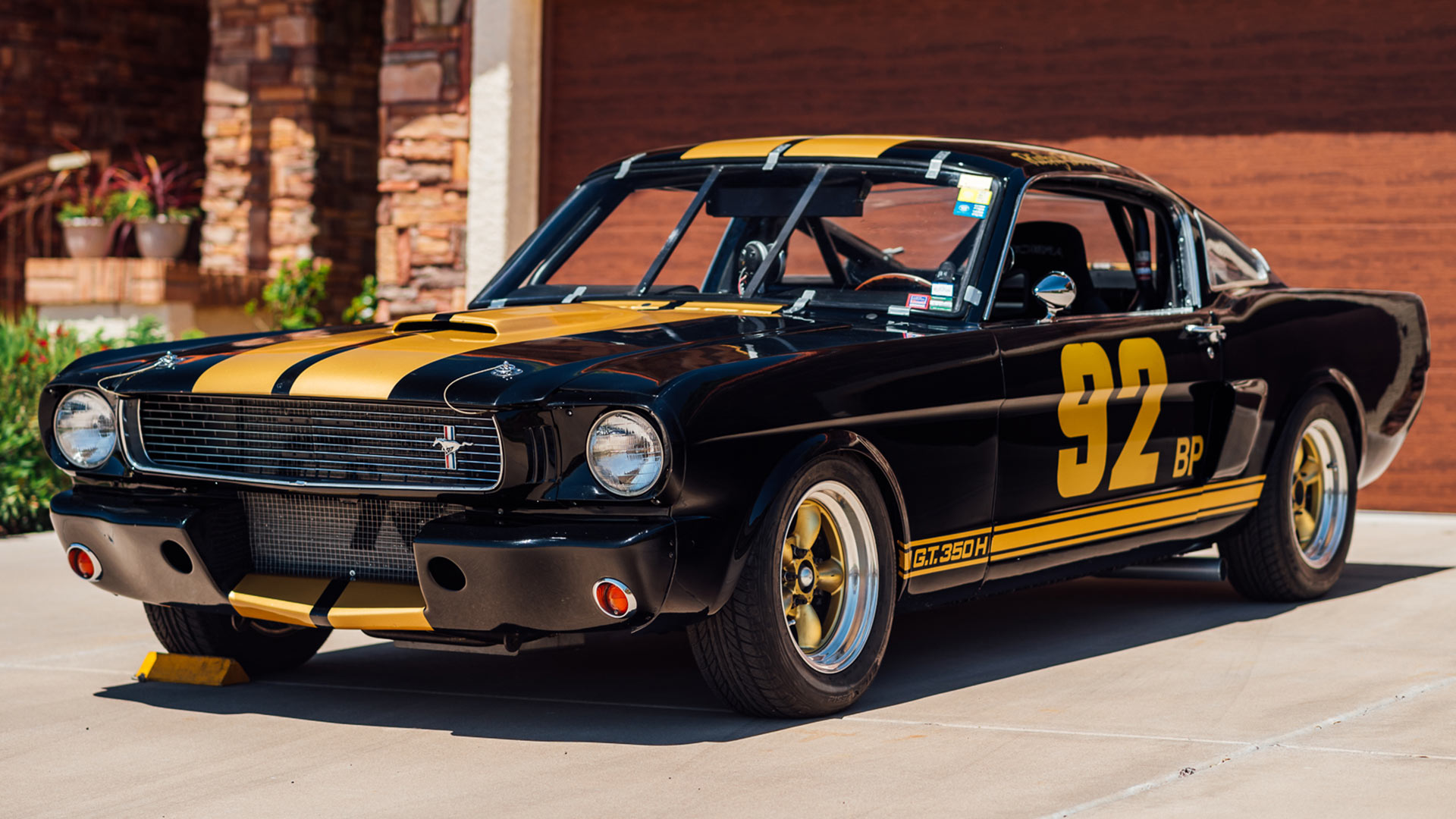 One of just 1,000 models created for the Hertz Corporation to offer out for hire, the GT350H added a number of stories to Shelby folklore.

Most notable is that weekend racers would hire a GT350H from Hertz, and then enter it into production-based SCCA competitions. Cars would frequently return with performance parts missing, or evidence of a roll cage being hastily added. 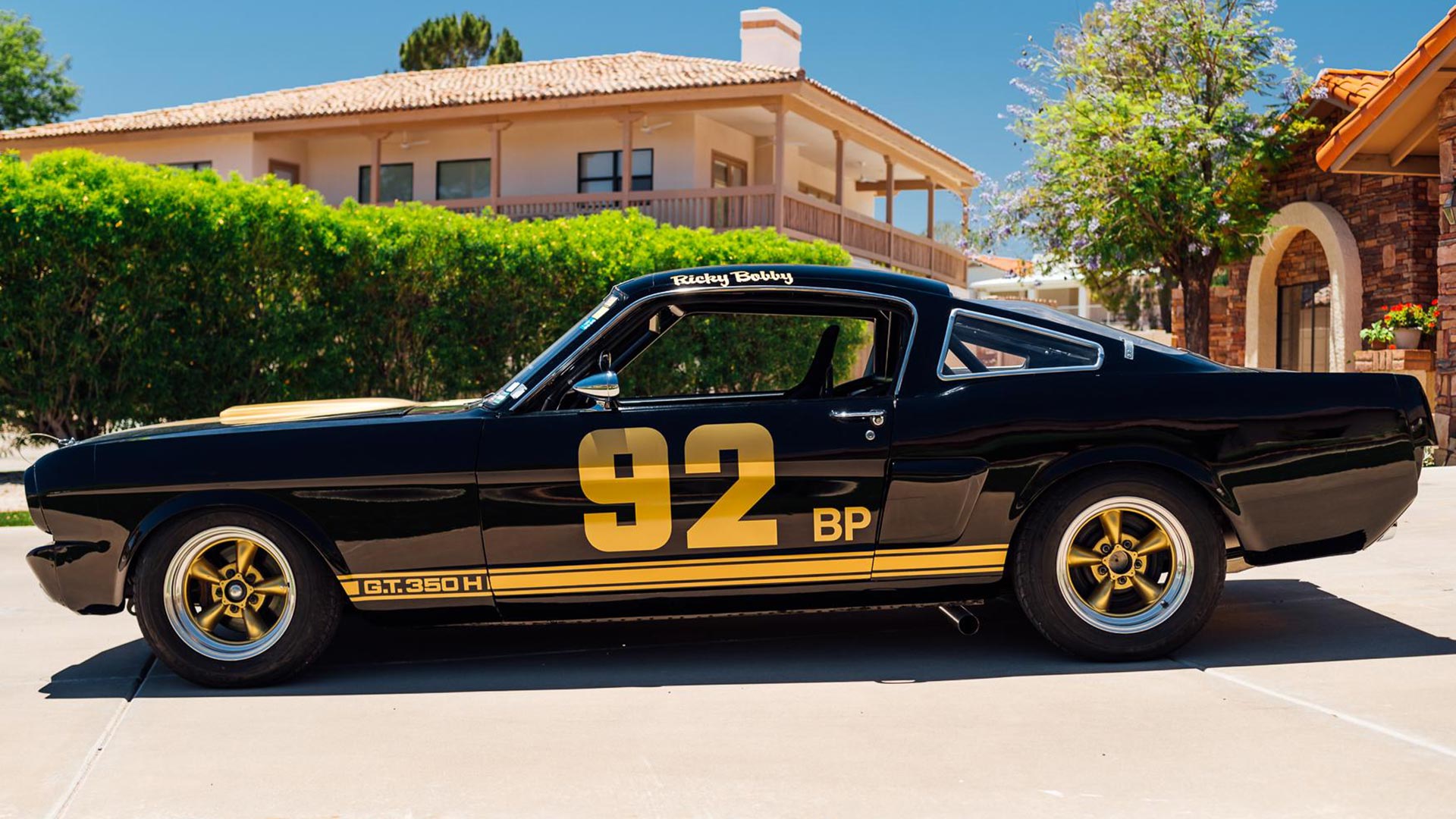 Despite the appearance, this GT350H served its time with Hertz before being turned into an actual racing machine.

After around a year of rental use in Arizona between 1966 and 1967, this car was returned to Ford. In 1968 a Mr. Goetz then purchased the car from Canyon Ford in Phoenix, and used the GT350H in various drag and hill climb events.

The car was then placed into storage in 1975, before being purchased by racing driver Tommy Thompson in 1999. 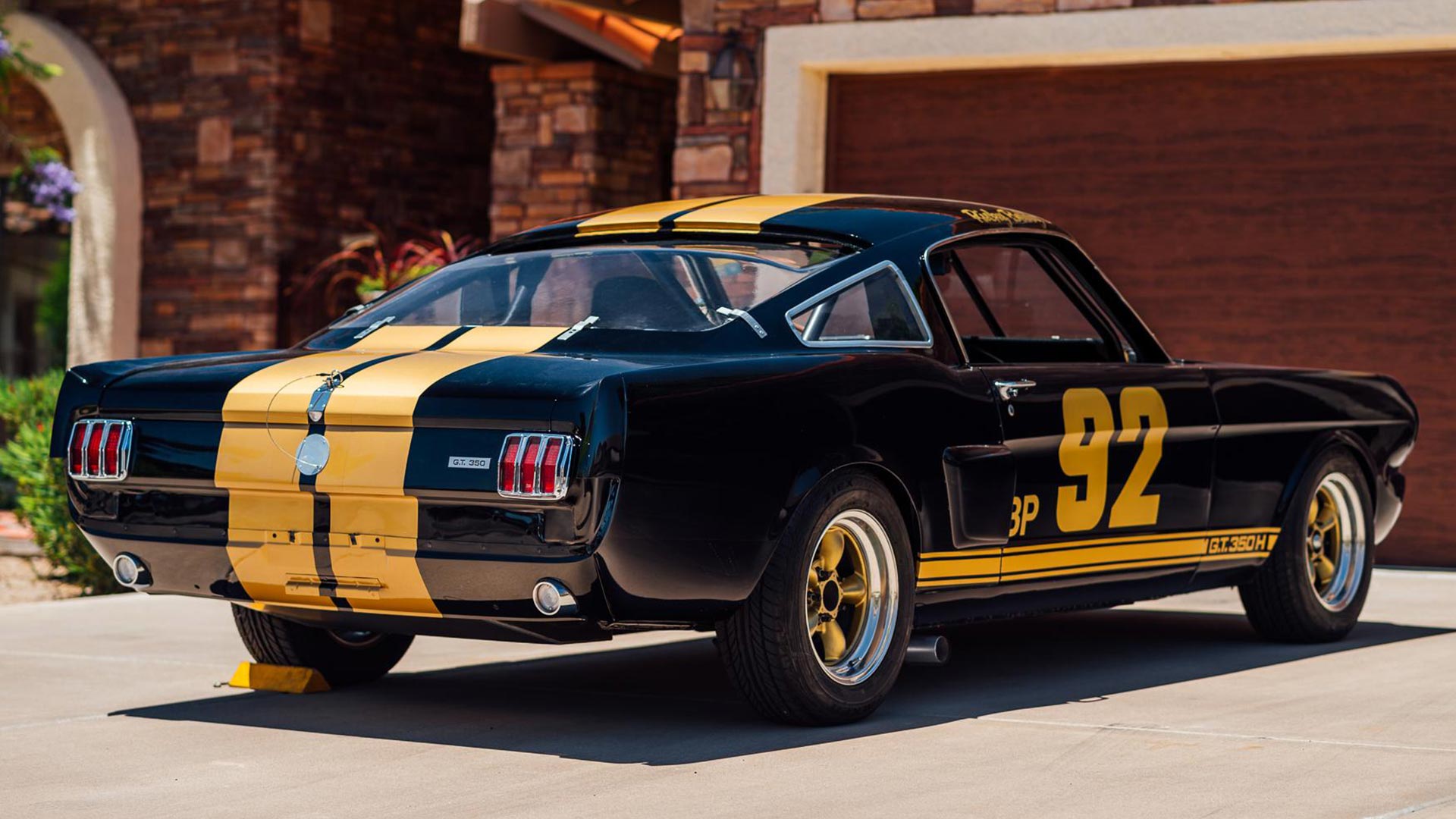 Thompson restored the car to full B-Production competition specification between 2001 and 2003. This included a full respray in Raven Black, matched with Le Mans-style stripes in gold, for the full Hertz effect.

Refreshed in 2015, the 289 engine is connected to a BorgWarner four-speed manual gearbox, and a 9-inch Ford rear axle featuring an Eaton Detroit Locker differential. 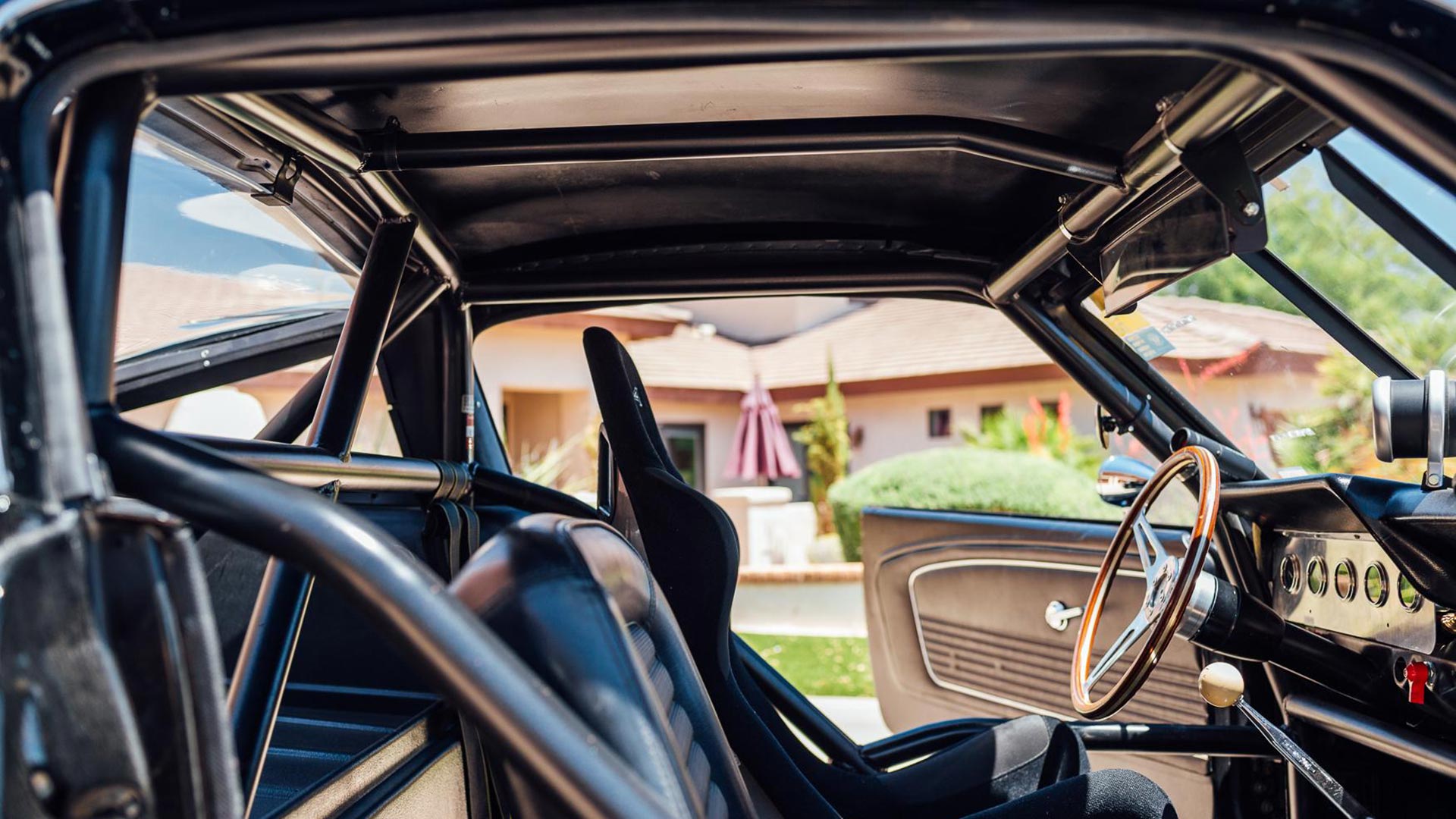 A dyno test in 2009 showed the V-8 engine producing 387 horsepower and 353 lb-ft of torque – substantially more than the 306 horsepower made by factory GT350H models.

Suspension and brakes have been fully updated and enhanced to cope with the extra power, whilst the chassis benefits from additional bracing. A full roll cage has also been added.

The interior has been stripped back, with a Cobra competition bucket seat for the driver combined with a five-point racing harness. A quick-release Mota-Lita steering wheel sits in front of a GT350R-specification dashboard, complete with an Autometer tacho. 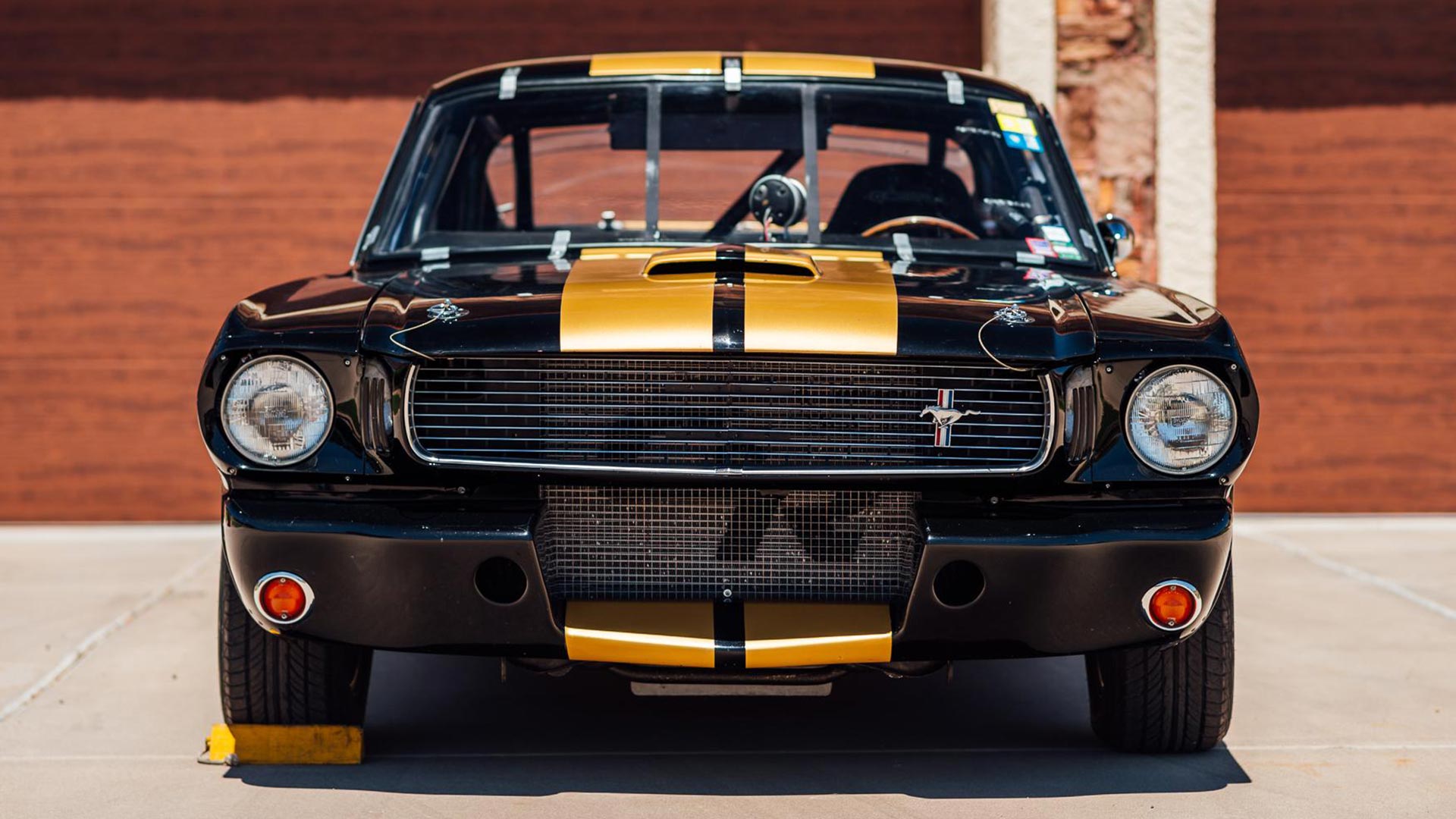 Buying this GT350H could also earn the winning bidder an entry to the 2019 Rolex Monterey Motorsports Reunion. This would be dependent on the driver meeting the requirements of the Historic Motorsport Association (HMSA).

A logbook from the HMSA is provided, whilst the car has also been registered with the Shelby American Automobile Club. With a substantial competition past, the new owner should find no problem entering this hire car into a number of vintage events.

Those interested have until Tuesday July 9 to place their bids and hope. Whilst a rental car is always the fastest thing you’ll ever drive, just remember you have to fix the damage with this one!