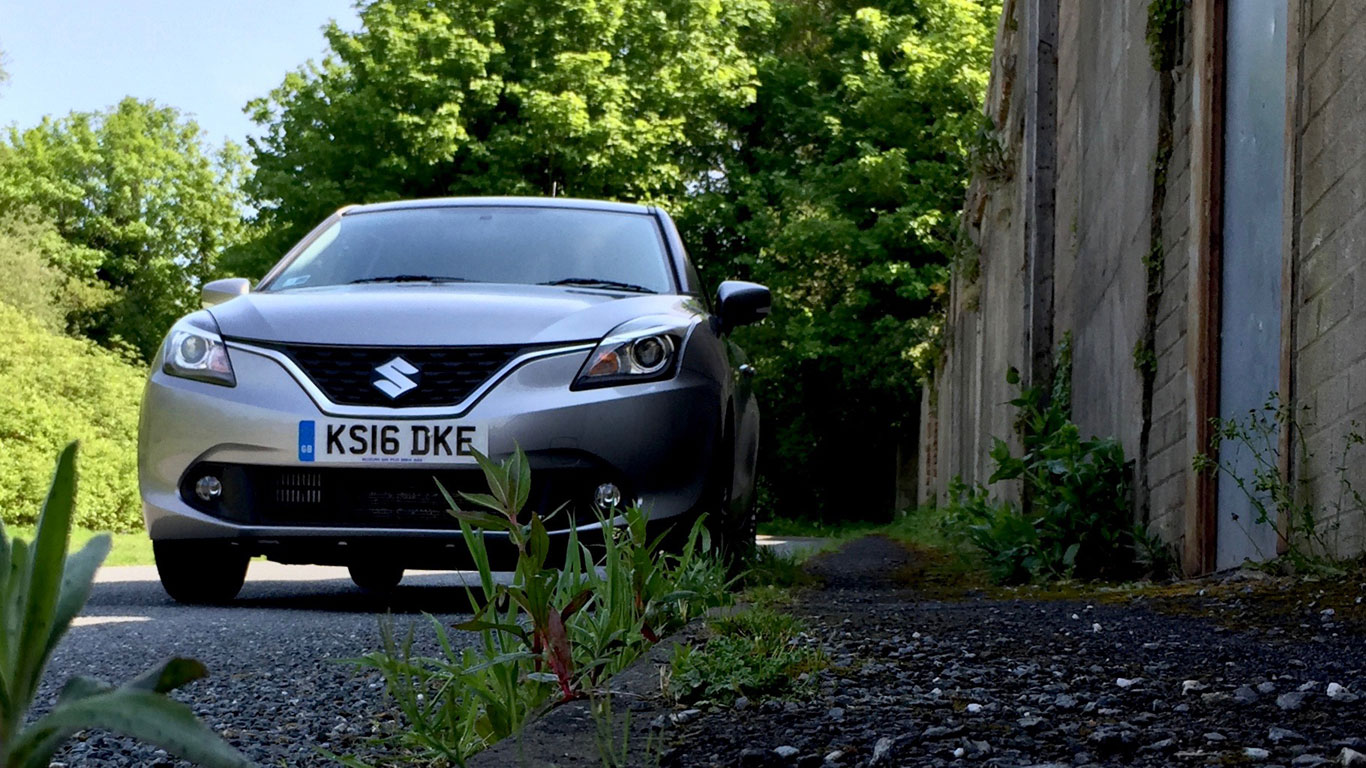 Suzuki unveiled two concepts at the 2015 Geneva Motor Show: the show-stopping iM-4 and the slightly less interesting iK-2. The iM-4 became the new Ignis, which you can’t buy in the UK (yet), while the iK-2 morphed into the Baleno (which you can).

Cards on the table: we’re more excited about the bonkers and boxy Ignis than we are the Baleno (sorry Suzuki), but that’s not to say the ‘Swift+’ isn’t without appeal. In fact, while we were expecting something rather sterile and soulless, the reality is anything but. Once again, Suzuki has managed to build a car that hits the target and one that is sure to find fans in the UK.

But wait, isn’t the Suzuki Baleno a ‘world car’?

Ah yes, about that. Historically, so-called ‘world cars’ have tended to be compromised in some way: attempting to appeal to all, but becoming diluted in the process. The Baleno is the first Suzuki to be built in India but sold in Japan, where it has been on sale since October 2015.

It would be a tad unfair to suggest the styling smacks of a world car, but, well, it does. From some angles it can look a tad awkward, but overall it’s all a bit plain Jane. Suzuki has added some bling in the form of chrome door handles, a chrome belt-line and – inexplicably – a chrome tailgate trim.

Weirdly, aside from the tailgate trim, the base-spec Baleno (one of two trim levels) does without the added chrome and it’s likely to be more pleasing to the eye. In some markets, the splash of chrome might give the Baleno showroom appeal, but in the UK it just has the feel of something built by Malaysia PLC, circa 1995. 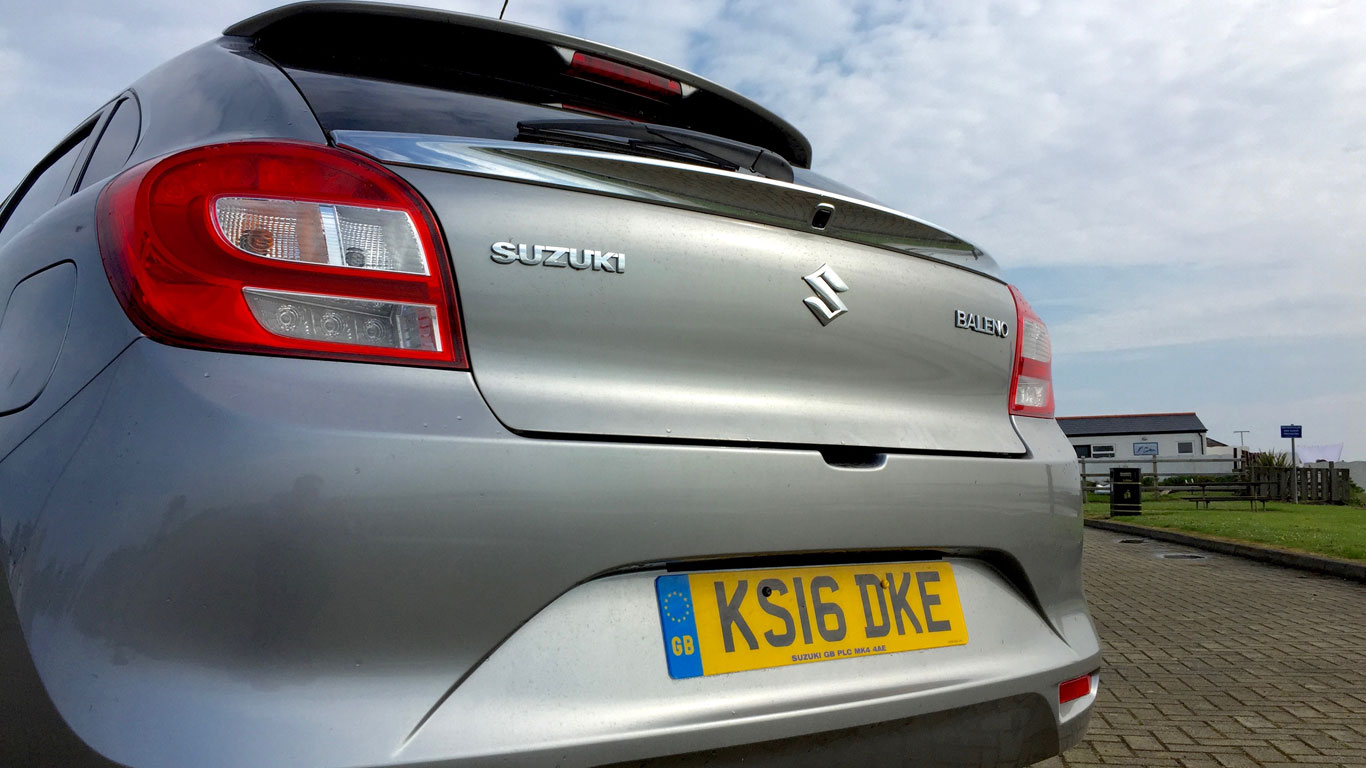 Firstly, there’s a complete absence of showroom-style chrome, so that’s a good start. The cabin is typically Suzuki, which is to say it majors on ergonomics and functionality, rather than soft-touch plastics and plush fittings. Suzuki is hoping to steal sales from the Skoda Fabia and Hyundai i20, which might be a struggle when based purely on interior quality.

But to dismiss the Baleno as little more than an also-ran would be to miss the point. While some parts of the interior certainly feel low-rent, the overall impression is one of a cabin built to last and one that isn’t likely to age. The touchscreen infotainment system is also one of the clearest and easiest to use systems in the sector.

To give you some idea of size, the Baleno is larger than the Swift, successfully managing to answer two major criticisms of the otherwise super supermini. The Baleno feels significantly larger inside, most notably for rear-seat passengers, who will revel in the additional legroom and headroom.

Tussling the Swift for practicality bragging rights, the Baleno sticks the boot in by offering 320 litres of luggage capacity. That’s a full 109 litres more than the Swift, making this a realistic proposition for Swift owners looking to upsize. Suzuki told us it is losing customers, with Swift owners seemingly unhappy to shift across to the Vitara or S-Cross. The Baleno is designed to encourage Suzuki loyalists to stick around. 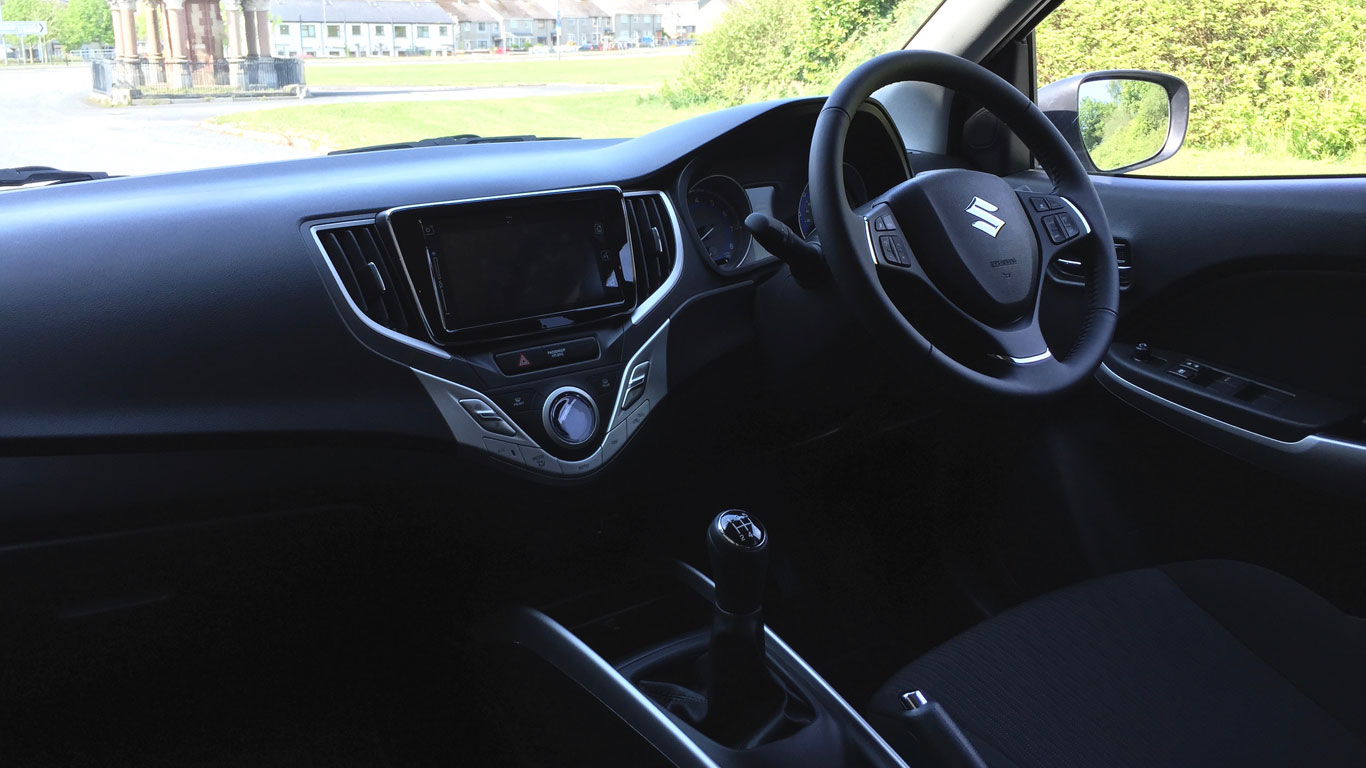 That’s all well and good, but it won’t drive as sweetly as a Swift

You’re right, it doesn’t, but that was never the intention. Suzuki readily admits that the Baleno “offers a more rational choice for buyers” by majoring on interior space, practicality and spec. But before you turn right over to the TV page, stick with us. It’s not over…

Thanks to an entirely new platform, the Baleno is one of the lightest cars in its class, with our 1.0-litre Boosterjet tipping the scales at a mere 950kg. That’s nearly 100kg lighter than the Swift Sport, which just happens to be one of favourite B-road terrorists. 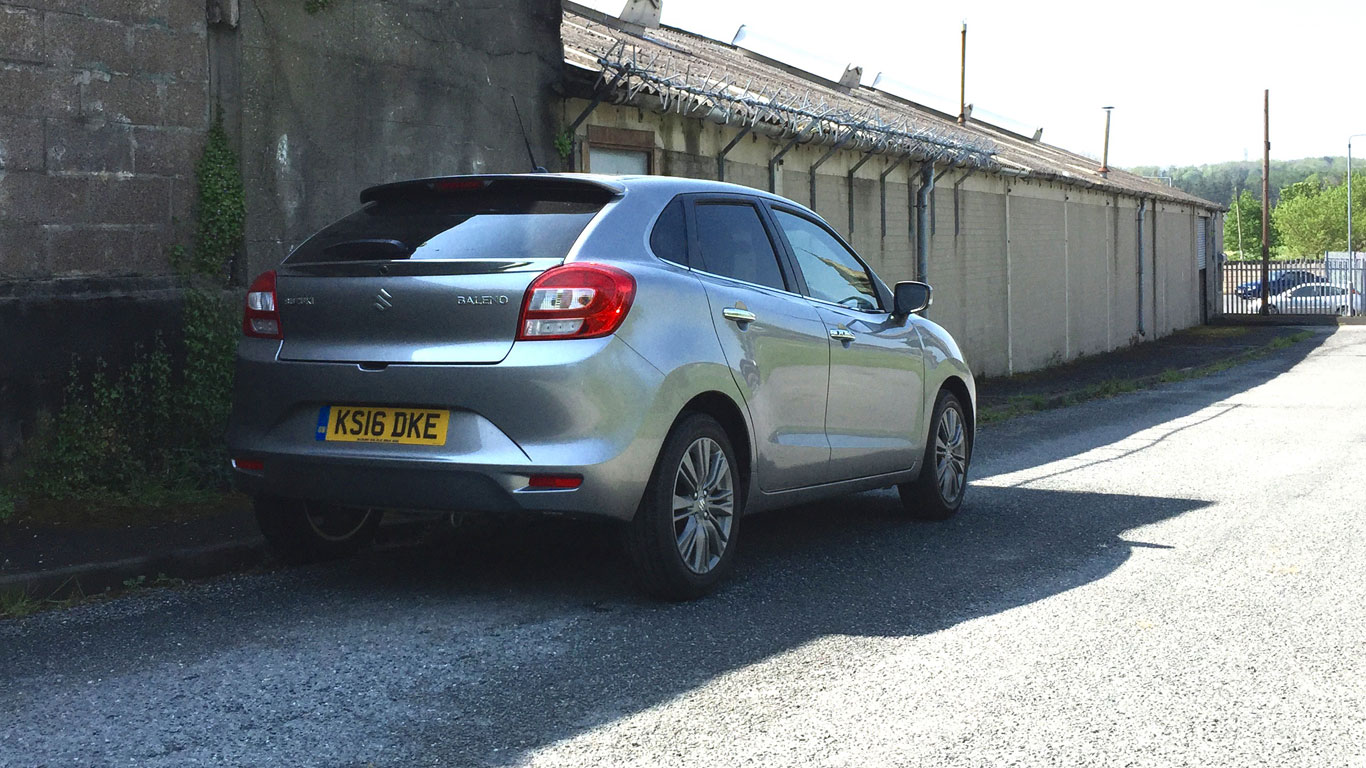 So you’re saying it’s as good as a Swift Sport?

Goodness, no – but the performance figures go some way to expressing just what a delightful engine this is. Not only is Boosterjet the most comically good name ever chosen for an engine, it’s also a riot to play with.

Pull away and you can feel the Baleno’s lightness, before the Boosterjet takes over and propels you into orbit. OK, we might be getting a little carried away, the power delivery is wonderfully smooth and linear. It’s also accompanied by the familiar thrum of a three-cylinder engine. Marmite cliché  alert: you’ll either love it or hate it. 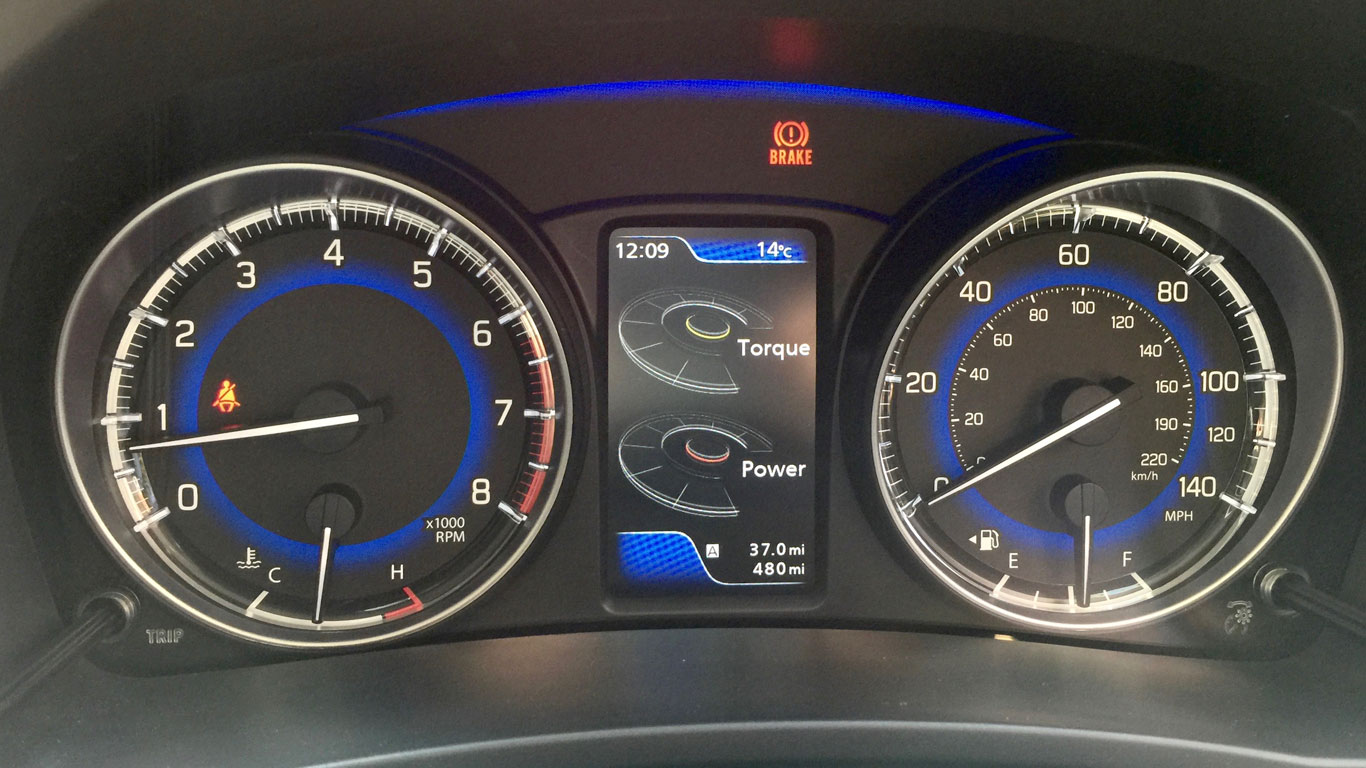 The steering is too light to encourage much in the way of B-road frivolity, but the Baleno is loaded with unexpected character and playfulness. Stick it in third gear, make the most of the torque, and indulge yourself in some rational playtime.

It also rides surprisingly well, although the soft springs and the car’s overall lightness can result in the car being forced off line by rutted surfaces and cat’s eyes. There’s a hint of body-roll, but the 185/55 tyres provide plenty of grip.

Will anybody actually care how it drives?

Arguably not. The Suzuki Baleno will appeal to Mr Rational more than it will Mrs Emotional, but you’d be wrong to dismiss this as little more than a value-driven white good. Not that it isn’t excellent value.

Prices start at £12,999 for the entry-level SZ-T, with an extra £1,000 putting you behind the wheel of the SZ-5. For an additional £1,400, Suzuki will also offer a six-speed automatic transmission for the SZ-5, with a 1.2-litre mild hybrid also available. 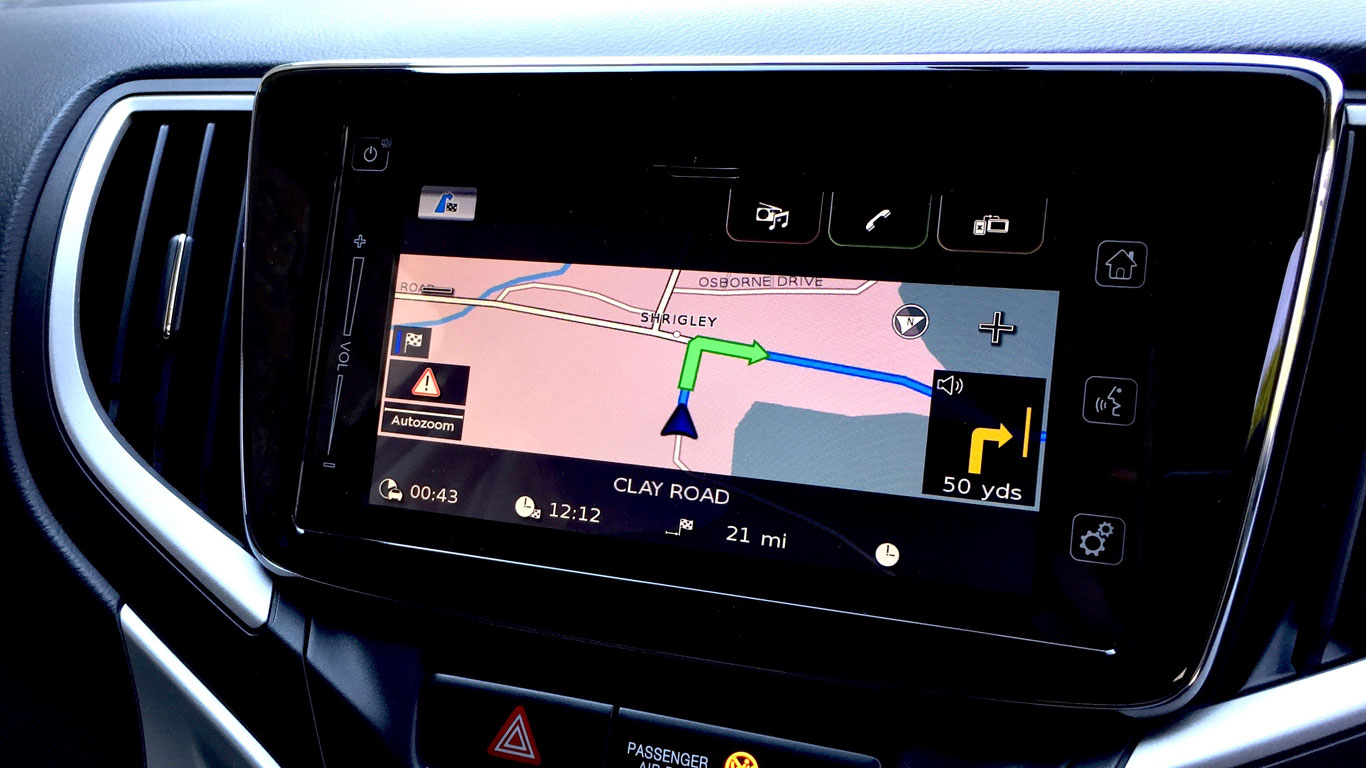 Sadly, SZ-5 owners also will be ‘treated’ to the garish chrome trim. But before SZ-T buyers start scoffing, the chrome tailgate trim is for all…

The Baleno is practical, excellent value, well-equipped and drives much better than we ever expected, but before we reach for that fifth star, there are a few caveats.

Evidence of cost-cutting can be found in the interior, with fit and finish lagging behind, say ,the Skoda Fabia. Small details like the incredibly flimsy controls for the odometer and screen brightness will remind you that you’re in a cheap car. They have the structural reassurance of a Matchmaker chocolate stick. 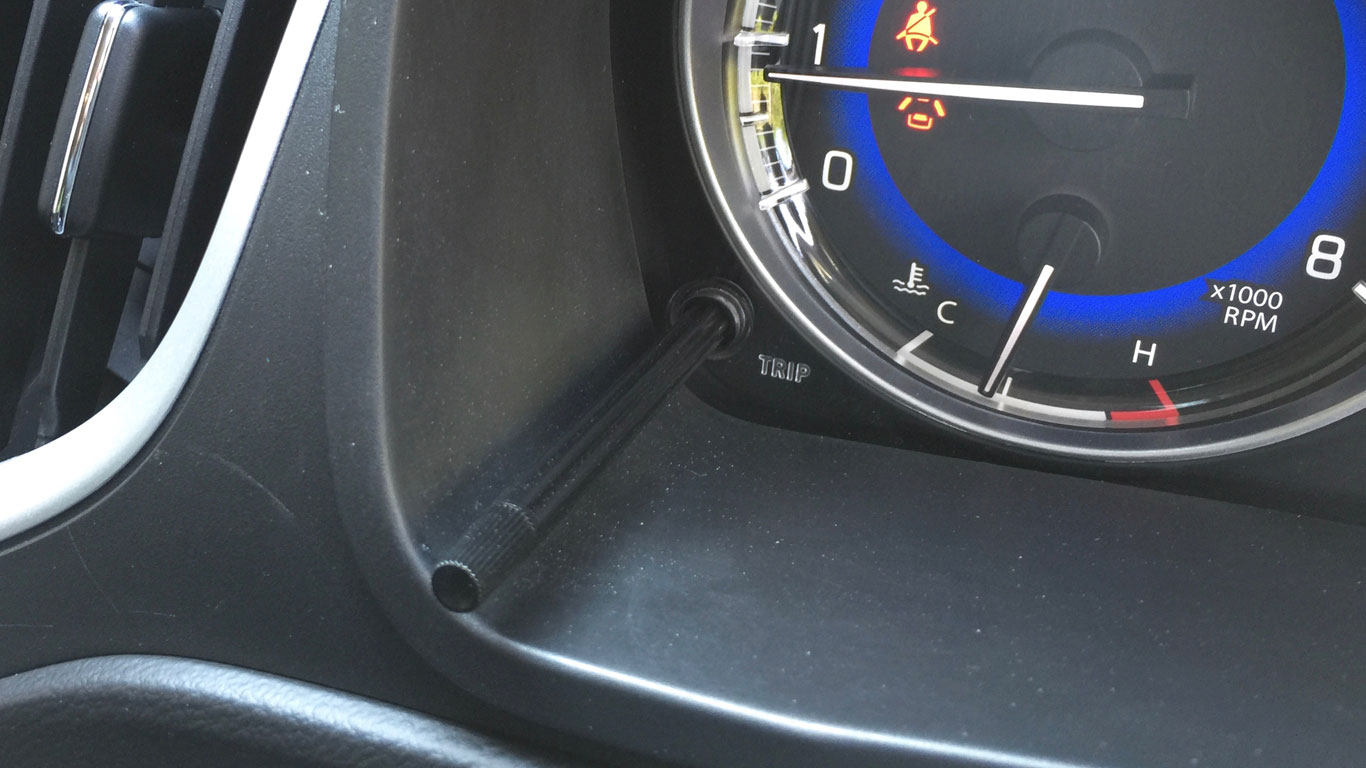 And although we loved driving the Baleno, there’s no doubt the Ford Fiesta remains the choice for keen drivers. The seats are also on the firm side, contributing to a feeling of being perched on rather than sat in the car.

We weren’t expecting to write 1,500 words on the Suzuki Baleno, but there’s a surprising amount to say about this new supermini. We’d rather like to spend some more time with the car, which is a compliment in itself.

The styling has grown on us and we thoroughly enjoyed chucking it along the coastal roads of Northern Ireland. Indeed, we only checked the fuel economy on return to base and were pleasantly surprised to see a figure of 49.2mpg. A little way short of the claimed 62.7mpg, but given we were too busy boosting the jet to care, this is more than admirable.

The 1.0-litre Boosterjet in SZ5 trim is a thoroughly good way to spend £14,000. If you’re prepared to forgo the luxuries of the top trim level, you can drive away in a new Baleno for no deposit and £199 a month. 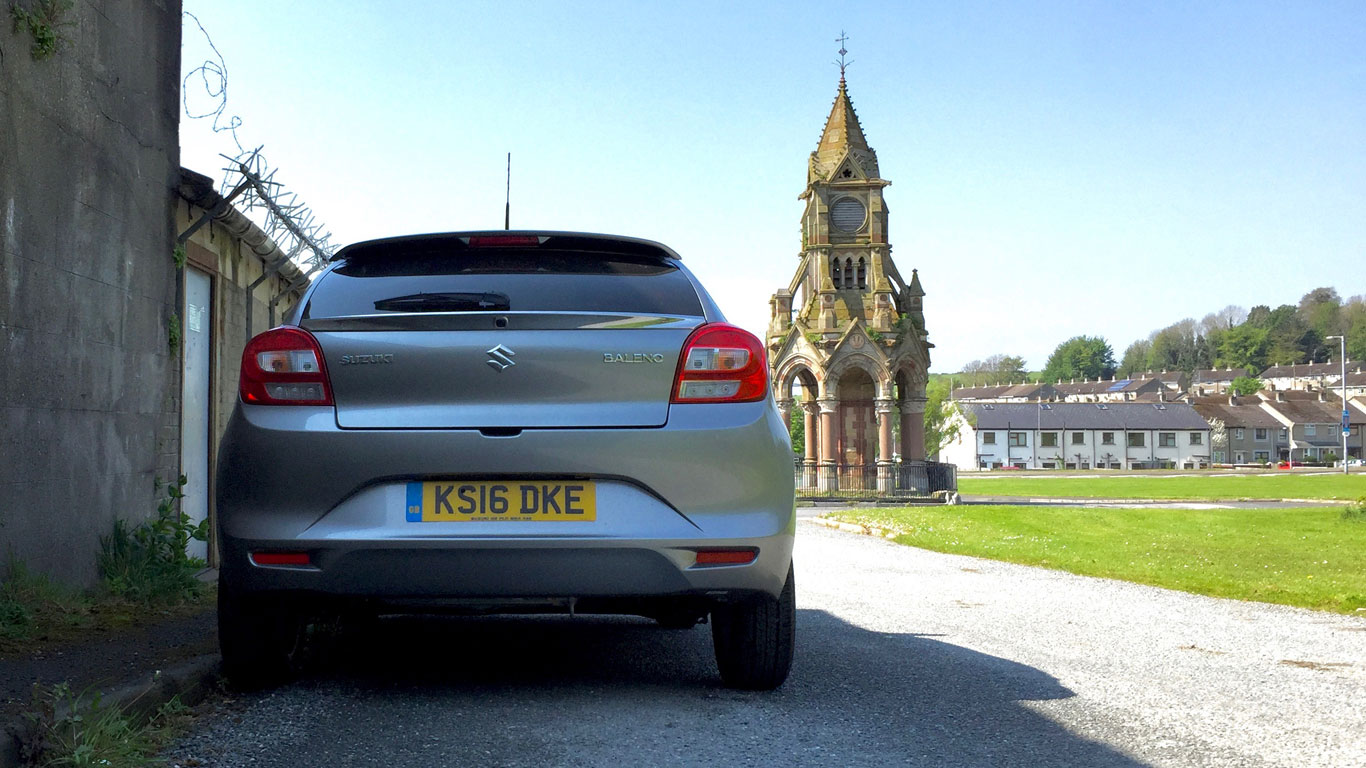