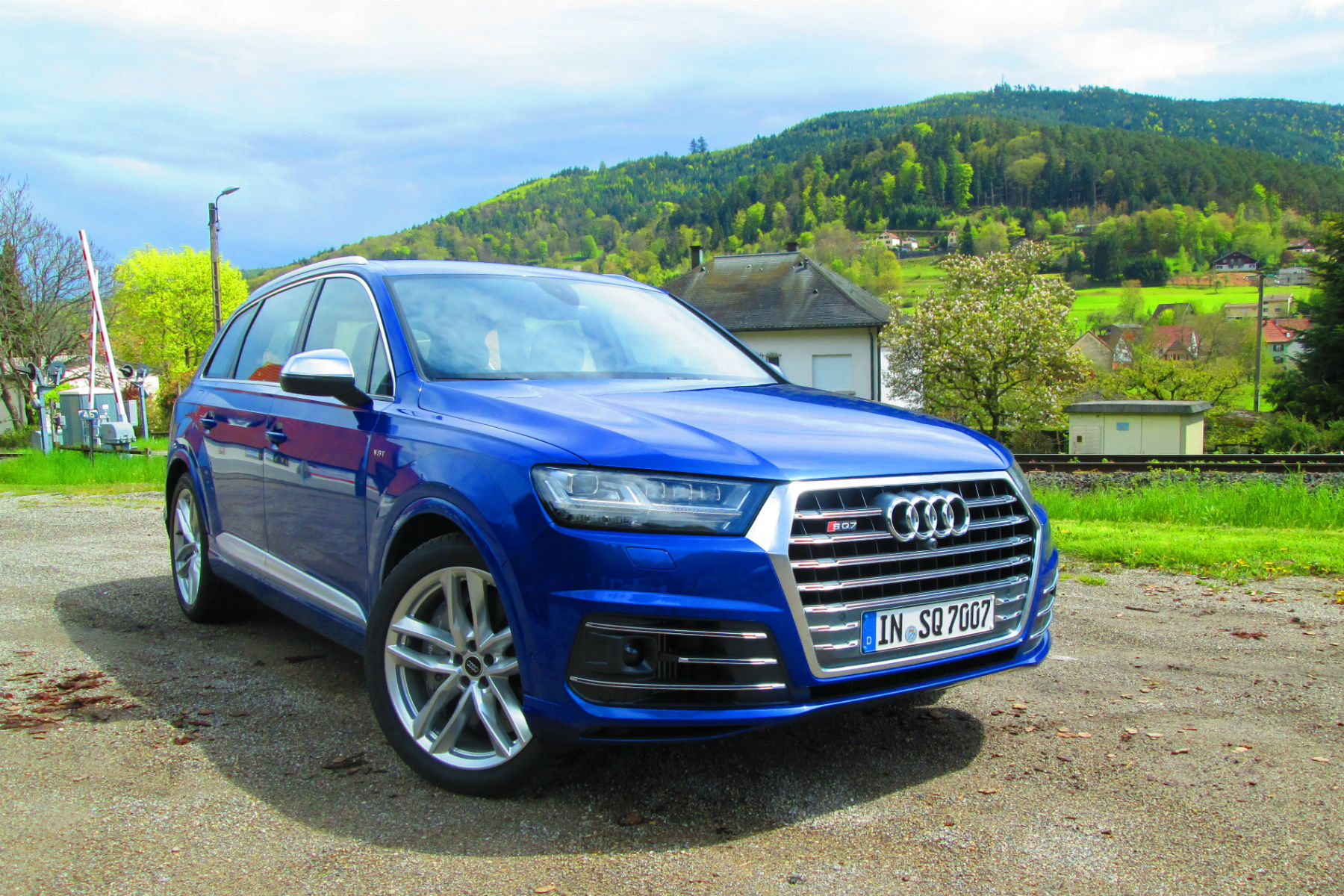 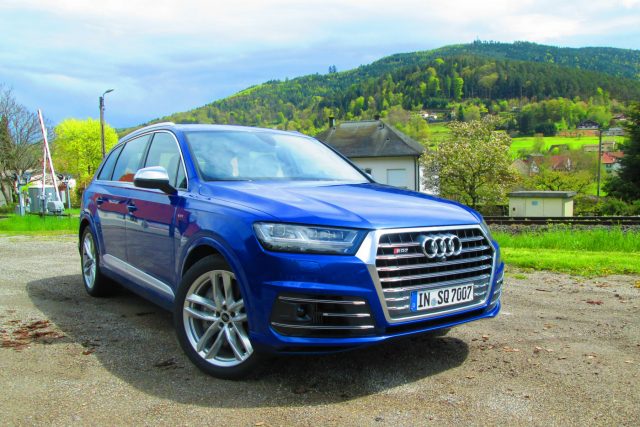 Ingolstadt’s four-wheel-drive flagship is the world’s most powerful diesel SUV, with 435hp and a tumultuous 664lb of torque. To put that into perspective, the Range Rover Sport SVR limps along with a paltry 502 lb ft.

All that oomph equates to 0-62mph in 4.9sec, out-trumping a Porsche Cayenne S diesel by 0.5sec. Not bad for a seven-seater the size of Surrey.

Behind this Top-Trump talent lies some very clever tech – including active anti-roll bars and a world-first electrically driven turbocharger that, according to Audi, ‘consigns turbo lag to history’.

All very impressive on paper, but how will the SQ7 fare on challenging mountain roads, at the corner where Switzerland, France and Germany meet? Time to fire-up the Quattro… 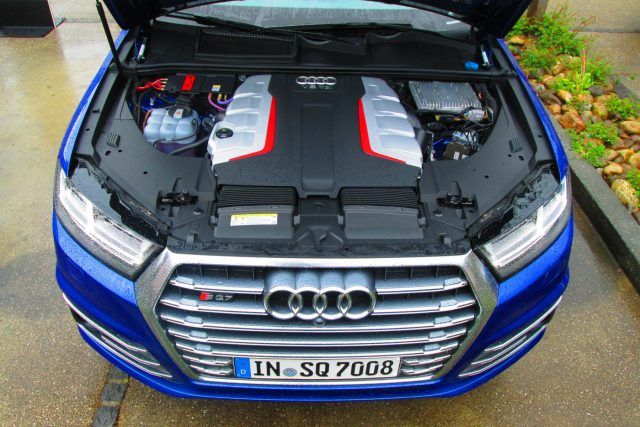 It has three turbos – and one is electric

The SQ7’s 4.0-litre diesel V8 uses two conventional exhaust-gas turbochargers, one for low loads and the other for sehr schnell, bitte.

The third turbo is, in fact, an electrically-driven compressor, powered by an additional 48v battery under the boot floor. Spinning at up to 70,000rpm, it keeps air passing through the engine to reduce lag (the delay in engine response while a turbo spools up) when you back off the throttle.

Does it work? Oh yes. With maximum pulling power from 1,000rpm, the SQ7 surges forward with barely a twitch of your right angle. From standing starts or three-figure speeds (when in Germany…), the big Audi just gathers up its skirt and goes. It’s utterly effortless.

The eight-speed Tiptronic gearbox is impressively smooth, too. It’s a traditional torque converter auto, rather than a DSG dual-clutcher, but none the worse for that. You can take control using the paddles behind the steering wheel, but the ’box is so intuitive it’s rarely worth the bother.

You might occasionally drop a couple of cogs to savour the growl of that V8, though. Exhaling through four square tailpipes, it woofles and rumbles like a bona fide muscle car. Then, as the revs rise, it wakes up with a hard-edged snarl that’s pure petrol V8. Forget rattly diesels; this oil-burner sounds more Maserati than minicab. 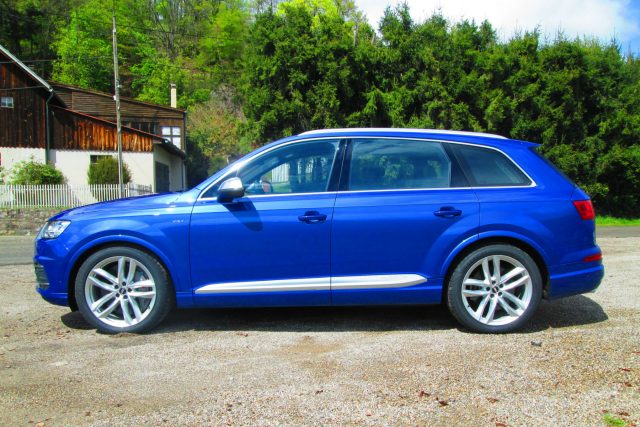 The handling is electric, too

Audi also uses electrickery in the SQ7’s suspension. Select the optional Driving Dynamics package (fitted to our test cars) and you get a torque-vectoring Sport differential and electromechanical active roll stabilisation.

The latter system works by automatically uncoupling the anti-roll bars on uneven surfaces to soften the ride. Chuck the car into a corner and the tubes reconnect in a fraction of a second, reducing body-roll and improving handling. Incredibly, the electric motors for the anti-roll bars produce up to 885lb ft of torque – even more than the not-exactly-puny engine.

On standard 21-inch wheels (22s are optional) the SQ7 takes potholes and sleeping policemen in its long-legged stride. But head for the hills (the Alps in our case) and it sharpens up its act, particularly in Dynamic mode, turning in with surprising deftness and agility.

The steering has more heft than we expected, and is much more communicative than Audis of yore. Ultimately, the Cayenne S diesel still feels sportier and more involving – but the Audi outguns it for sheer speed. 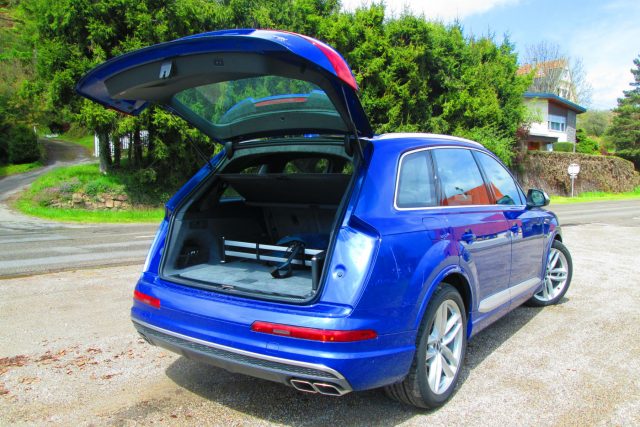 On a British B-road there would be no escaping the Q7’s sheer size. Its 1,968mm girth stifles your speed more effectively than any limitations of the chassis could do. However, on wide Alpine hairpins that climbed relentlessly towards the clouds, this 2,330kg SUV did a passable impression of a sports car.

When you’re not playing Michèle Mouton (a famous Audy rally driver – look her up), standard four-wheel steer makes the Q7 more manoeuvrable around town. The rear wheels swivel in the opposite direction to the fronts when parking, effectively shortening the car’s wheelbase. Then, as your speed increases, the wheels turn fractionally in the same direction to aid stability.

The Q7’s dimensions have advantages when it comes to interior space, of course. Fold the rear seats and you’ll find a bigger boot than any rival apart from the Mercedes-Benz GLS, while only the BMW X5 and GLS offer seven seats. 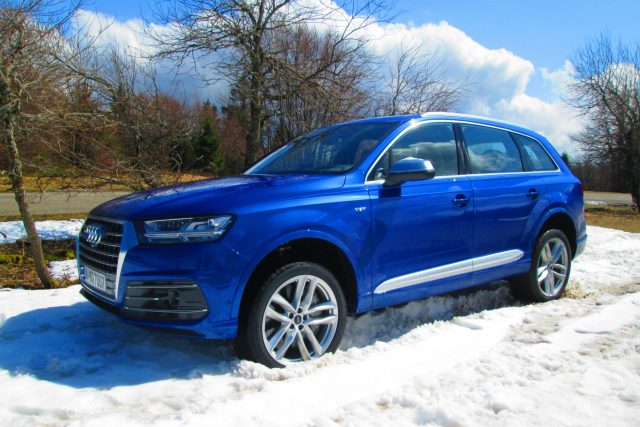 We tried to drive off-road… and got stuck

The sheer number of mechanical and electronic weapons in the Audi’s armoury make it a safe and confidence-inspiring drive – even when the mountain weather closes in. You have to be pushing seriously hard to get the SQ7 out of shape.

However – a word of warning – all that technology can’t compensate for rugged tyres and a proper locking differential if you drive off-road. We parked the Q7 on a few inches of snow for some photos – and promptly got it stuck.

With its front wheels scrabbling helplessly, the Audi diverted 100% of traction to its rear tyres. They simply dug a deeper hole and soon the car was beached on a bed of snow, much to amusement of couple of passing road maintenance workers.

Two shovels, a lot of wheelspin and some multi-lingual swearing later, the Audi was free. But the experience served as a salutary reminder of the difference between a serious off-roader (think Land Rover Discovery or Toyota Land Cruiser) and a Tarmac-biased SUV. 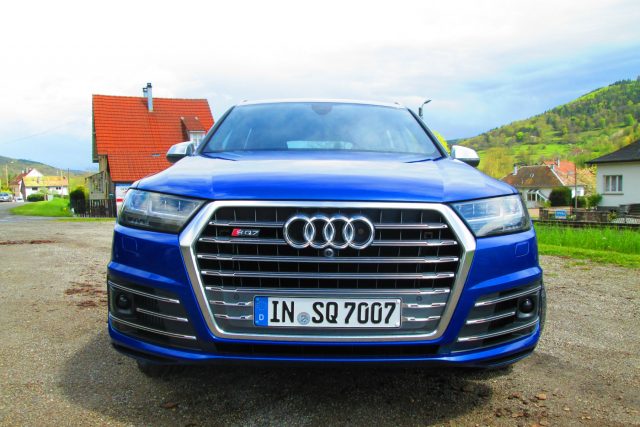 New Audi light signature: coming soon to a fast lane near you

For most people, their first view of the SQ7 will probably be its new LED ‘double arrow’ light signature in their rear-view mirror. It reminds us of the old British Rail logo, which probably isn’t the effect Audi was aiming for…

You can also opt for adaptive Matrix LEDs, which swivel with the steering and dim sections of the high-beam automatically to avoid dazzling oncoming cars. Put the light switch in Auto mode and the car does all the work for you.

Lights aside, the Audi looks surprisingly subtle. Some aluminium-look trim on the front grille and sills, a wider rear spoiler, those quad tailpipes and a couple of V8T badges are all that distinguish it from a cooking Q7. It’s tasteful, but hardly handsome. A Range Rover Sport still trounces it for high-street appeal. 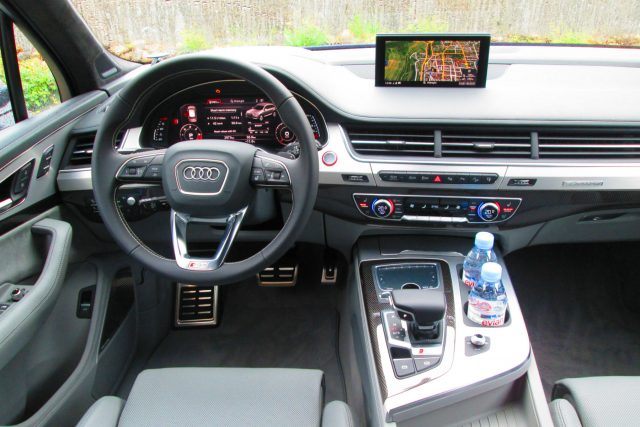 It has one of the finest interiors known to man

Prodigious power and bewildering technology aside, the SQ7 remains a large, family-focused SUV at heart.

Audi interiors really are the best in the business and, with plush leather and ample space to stretch out (in the first and second rows at least), the SQ7 feels opulent and very comfortable. Unlike lesser Q7s, seven seats are standard.

It ticks the ‘Germanic build quality’ box, too. The doors slam with a softly-damped thud and every surface is wrapped in leather, suede or brushed aluminium. There are smatterings of lightweight carbon fibre as well, a laughable conceit in a huge SUV.

Now familiar from the A4 and TT, Audi’s Virtual Cockpit still looks fabulously high-tech. A 12.3-inch display behind the steering wheel replaces the traditional dials, and can be configured to show the navigation map, keeping the central screen free for ‘infotainment’ functions. Our only gripe is that it should be standard, rather than a £600 option.

A huge array of driver assistance systems (24, to be exact) and a five-star score in Euro NCAP crash tests should put the minds of family buyers at ease. If we really had to drive head-long into a brick wall, the Q7 would be near the top of our most-wanted cars to crash. 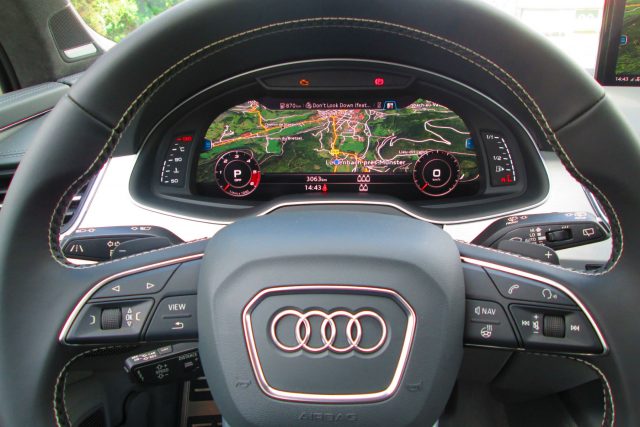 It’s a car we loved despite ourselves

The SQ7 is impressive on paper, and on the road (let’s not dwell on our off-road experience, eh?).

We were worried this technological tour-de-force would feel remote and dull to drive, but that’s far from being the case. Its numerous systems work with the driver to improve feedback, agility and safety.

It’s hard to avoid the suspicion that Audi is trapped in a vicious circle, using ever more tech to tame a car that’s bigger, taller and heavier than it really needs to be. But buyers have an insatiable appetite for large SUVs, so you can’t blame the Germans for meeting that demand.

Unless you live in Dubai, a powerful petrol-engined SUV is a short-cut to bankruptcy. So a diesel makes more sense. And besides, all that torque is addictive. The SQ7 feels like it could tow a tower block, and its sheer shove-in-the-back muscle can’t fail to make you smile.

For keen drivers, the Porsche Cayenne S diesel still edges it in this class. But if we’re talking practicality or performance, the Audi wins hands-down. Never mind Donald J., the SQ7 is literally the Top Trump. 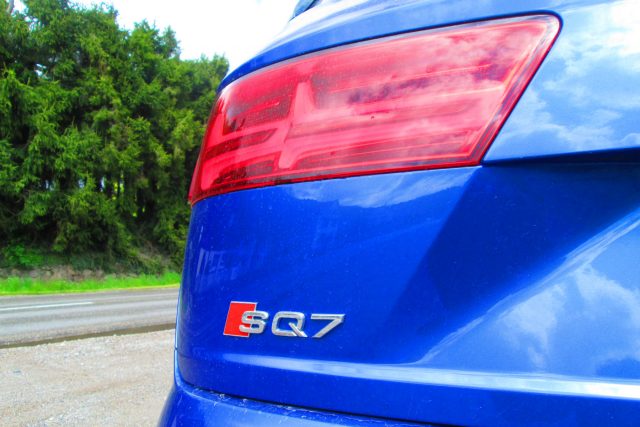 Expensive to buy and run