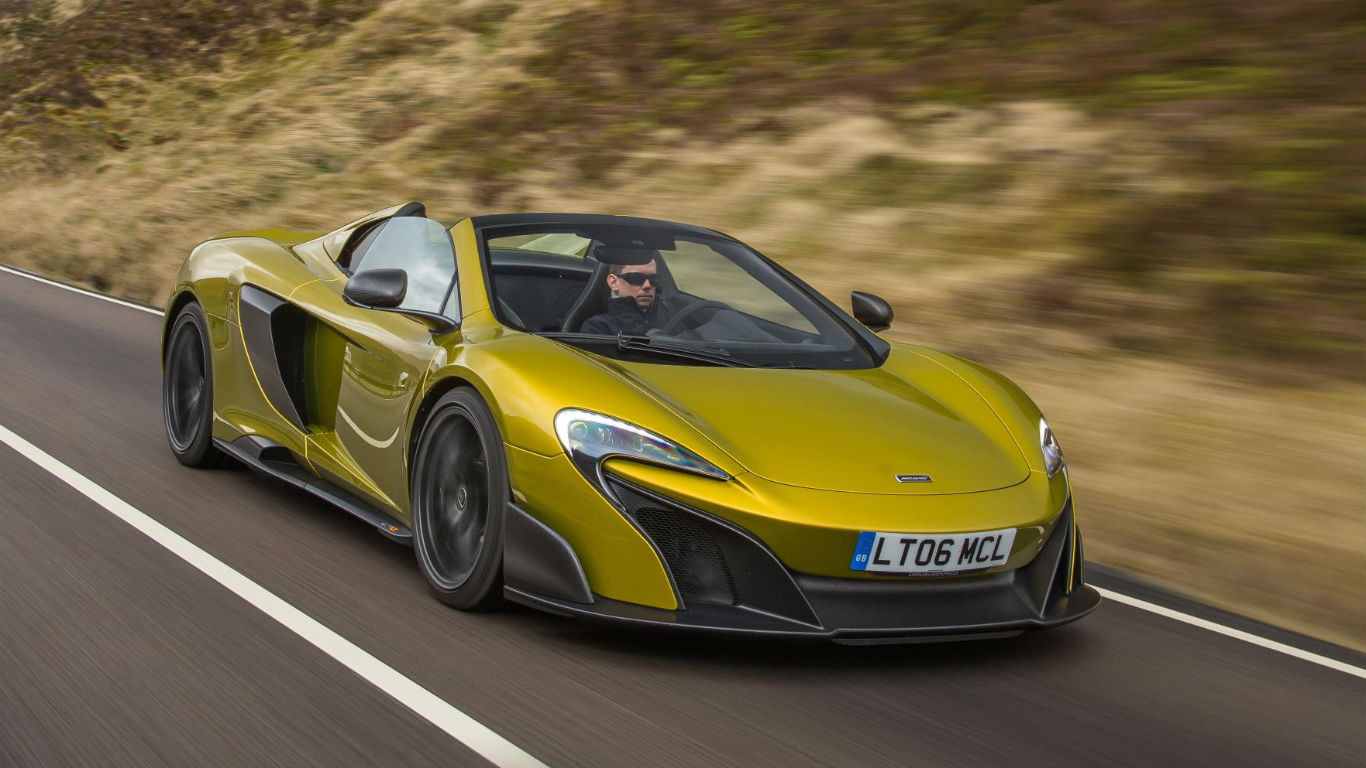 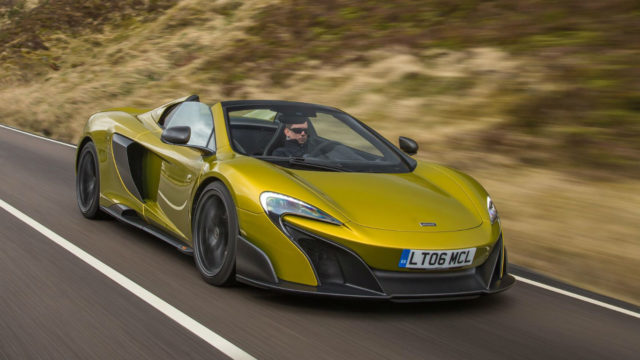 There weren’t many high-points in the last series of Top Gear, but seeing Jenson Button spank a McLaren 675LT around Dunsfold Aerodrome was certainly one. In the hands of the Stig, the car went on to break the lap record, its time of 1min 13.7sec quicker than a Pagani Huayra or BAC Mono. Chris Evans even stumped up £285,450 of his own money to buy one. Clearly, this unreasonably-priced car had something special.

Along came a Spider 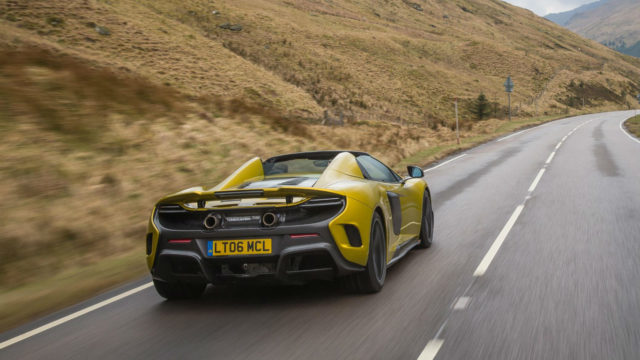 Before we continue, a minor caveat. McLaren nerds will have clocked our test car is a convertible 675LT Spider, whereas Top Gear’s lap time was set in the fixed-roof coupe. However, both use an identical 3.8-litre twin-turbo V8, and the Spider is just 40kg heavier. That means matching 0-62mph times of 2.9sec, plus a mere 2mph difference in top speed (205mph for the coupe, 203mph for the Spider). 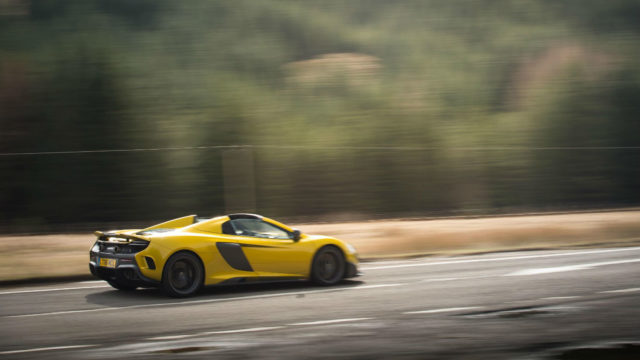 Nit-picking over such details is, of course, what McLaren does best, and numerous minute modifications transform a ‘standard’ 650S into a 675LT. One change is immediately apparent, though: the longer rear bodywork, or ‘Longtail’ of the car’s name. Originally a nickname given to stretched versions of the McLaren F1 GTR race car, Longtail is set to become Woking’s performance sub-brand. What ‘GT’ is to Porsche, in other words.

Number of the beast 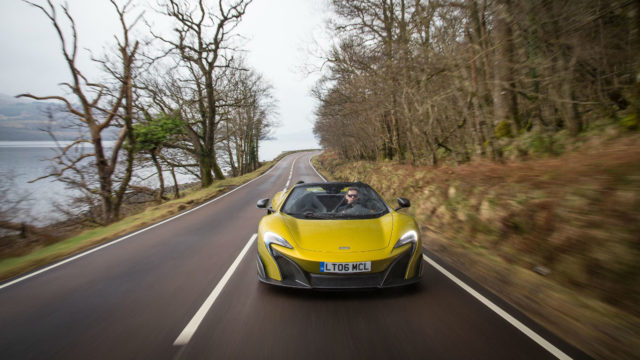 Apart from a power boost to 675hp (a devilish 666bhp in old money), the LT gets lower, stiffer suspension and a wider track than the 650S. It also produces 40% more downforce, aided by a huge rear spoiler/airbrake that pops up in your mirrors when you haul on the anchors. Lighter wheels, carbonfibre seats, thinner glass and reduced sound-deadening contribute to a 100kg weight saving. 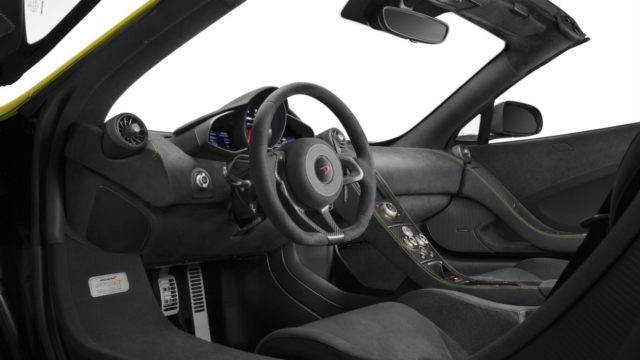 Ducking under the McLaren’s dihedral door, then sliding over its wide sill is not a move that can be performed gracefully – even with the roof down. However, once ensconced in the thinly-padded seat, the driving position is fantastic. Cocooned by carbonfibre, you look ahead over a low scuttle and wraparound windscreen that recalls the original Honda NSX. Or indeed a Le Mans racer. 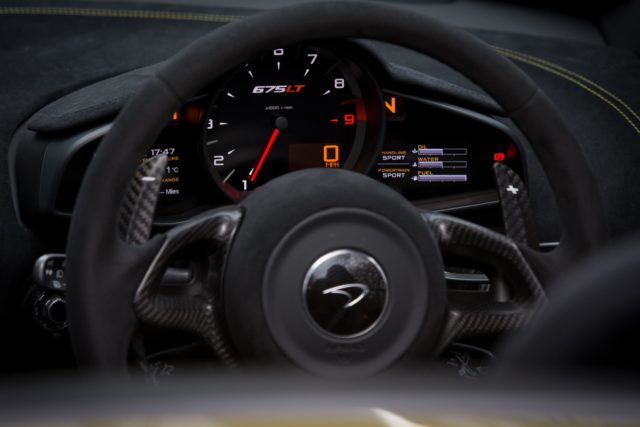 The turbocharged V8 fires with a brusque bark, but there isn’t the theatrical throttle-blip of a Lamborghini. Its steering feels weighty but super-sensitive (the rack is actually quicker than McLaren’s P1 hypercar), while the ride is markedly firmer than a 650S. Even so, with Normal driving mode selected, the 675LT will potter along with the docility of a tiger basking in the sun, its seven-speed semi-auto gearbox shifting up early to save fuel. 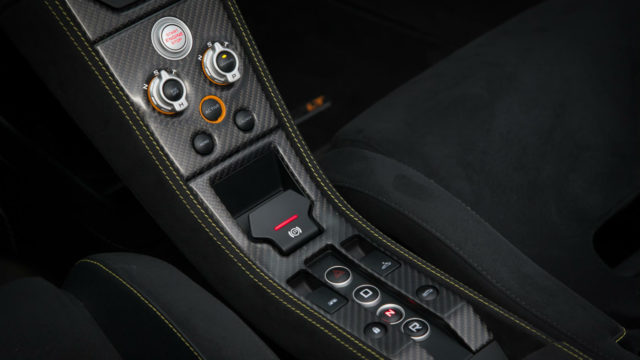 Time to let the tiger show its claws. We switch to Sport and select manual mode for the gearbox, clicking down a couple of ratios with the exquisite carbonfibre paddles. By God, this thing is quick! Power delivery is progressive: a steady shove becomes a kick in the back above 3,000rpm, followed by a controlled explosion beyond 5,000rpm. The 675LT hurls you at the horizon with a ferocity that’s intoxicating, addictive and mildly terrifying in equal measure. 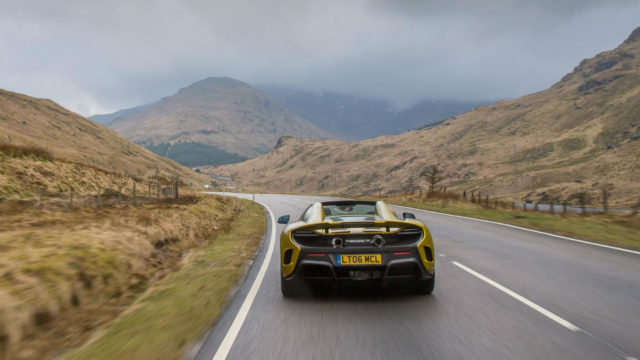 Fortunately, the McLaren isn’t a mad, bad supercar of the old-school: ready to spit you off the road at the first whiff of a wet corner. On damp tarmac, we could feel its track-focused Pirelli P-Zero Trofeo R tyres (19-inchers at the front, 20s at the back) occasionally breaking traction, but the car’s supple chassis and incisive steering inspire confidence. The 675LT’s performance might intimidate: its chassis does not. 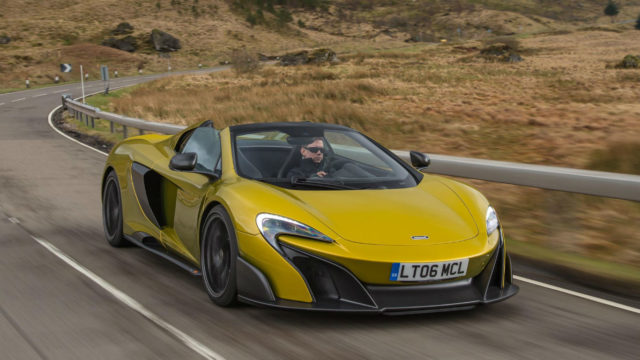 That’s not to say the Big Mac won’t kick out its tail, as anyone who watched Jenson Button obliterate a set of tyres on Top Gear can confirm. Any car with 675hp – nearly twice the output of a Porsche Cayman S – coursing through its rear wheels will do the same. But it’s the finely-honed finesse of this mid-engined monster’s handling that impresses most. Roofless or not, there’s a feeling of absolute, carbonfibre-clad rigidity that’s common to all McLarens. 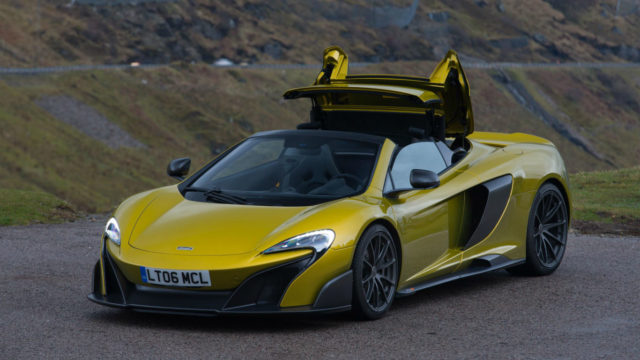 Ah yes, the roof. McLaren originally built 500 675LT coupes, but demand was such that they followed-up with 500 Spiders. These sold out within two weeks and are now fetching premiums well beyond the £285k asking price. The car we drove, which had cosmetic mods from McLaren’s in-house MSO customisation service, including a 24-carat gold-lined engine bay à la McLaren F1, is estimated to be worth over £500k. 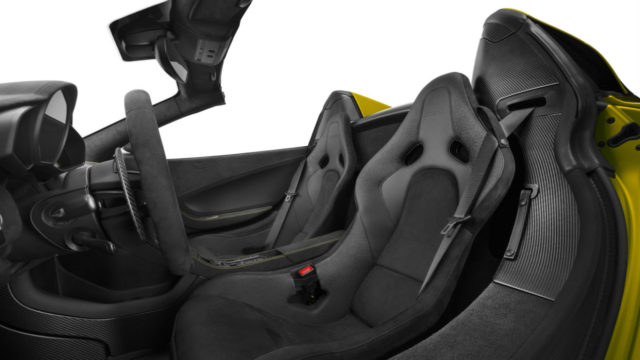 But forget fresh air: the main advantage of that electrically-folding hard-top is allowing you to hear the unfettered snarl of that visceral V8. McLarens have been criticised in the past for sounding a bit dull, but the 675LT’s 60cm longer titanium exhaust adds both decibels and drama. At lower revs, turbo whoosh and wastegate whistle are the dominant noises, but stretch the V8’s legs and its tone hardens to a red-blooded roar. The exhaust pops deliciously in Sport mode, too. 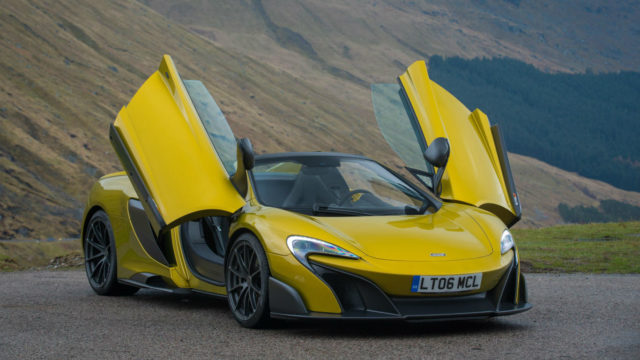 With the roof down and windows raised, the McLaren’s cabin is pleasantly free from buffeting. And as we discovered, if you drive fast enough, rain simply skims over the top. However, there is one reason you might choose to raise the roof: other people. In this age when everyone has a camera in their pocket, a rare and exotic McLaren becomes a rolling social media event. It was frankly impossible to fill up with fuel without being questioned about price, top speed and “how fast have you had it?”. Shrinking violets need not apply. 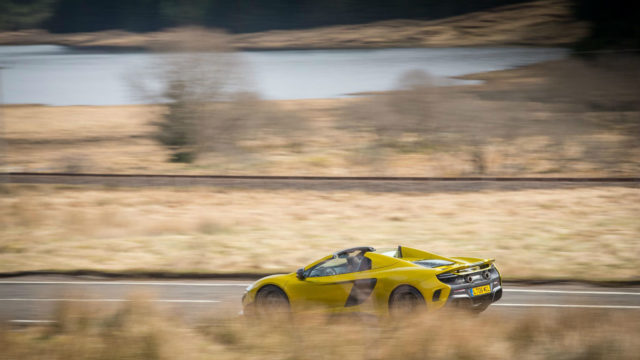 Our route takes us away from the hills and onto a motorway. Here, the 675LT feels out of its comfort zone. The constant tyre roar would soon induce a headache (blame the lack of sound-deadening) and the twitchy steering needs regualr corrections. A 650S would be a more pleasant long-distance companion. That said, we’d love to experience a 675LT on a German Autobahn. It accelerates from three-figure speeds with more impetus than most cars muster from a standstill. 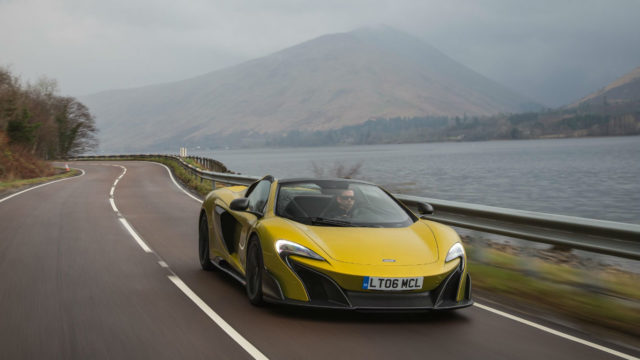 Our journey ends with a much-loved B-road that ducks and dives around blind corners between high hedges. Many supercars would feel too big and cumbersome here, but the 675LT is in its element. Its chassis is so intuitive, its responses so immediate, that it feels hard-wired into your brain. There’s no opportunity for using full throttle, but that scarcely matters. Like all great driver’s cars, the McLaren also rewards at sane speeds.

A load of Bull 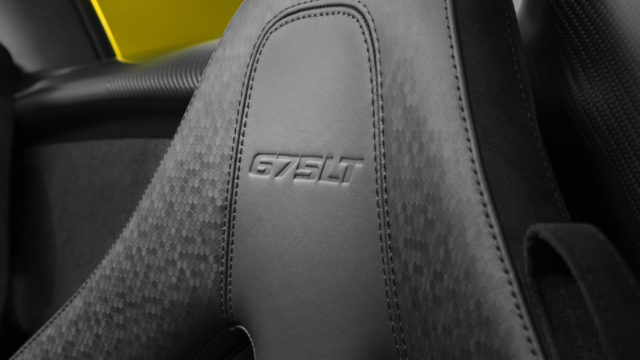 We step out with ears ringing and eyeballs vibrating. Our mouth is dry, our palms sweaty. The LT is like a 650S after an intravenous injection of Thai Red Bull (the sort it’s illegal to sell here), and driving it is utterly intense – beyond even what many supercars can deliver. Heaven knows what it’s like on a track, or indeed how a P1 must feel with an extra 242hp at its rear wheels.

Race car for the road 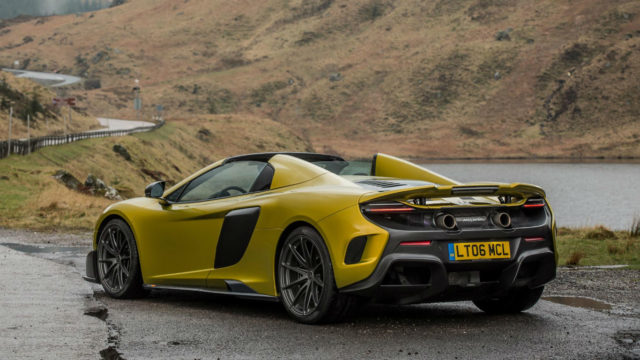 Even in the shadow of the mighty McLaren F1 – still the greatest supercar ever made – the 675 feels worth of the Longtail name. It’s ridiculously quick, as evidenced by that Top Gear lap time, but also incredibly exciting to drive on real roads. This is no straight-line showpony like the Bugatti Veyron. Jenson Button said the 675LT “feels like a race car”, and who are we to argue?

Start of a Long story? 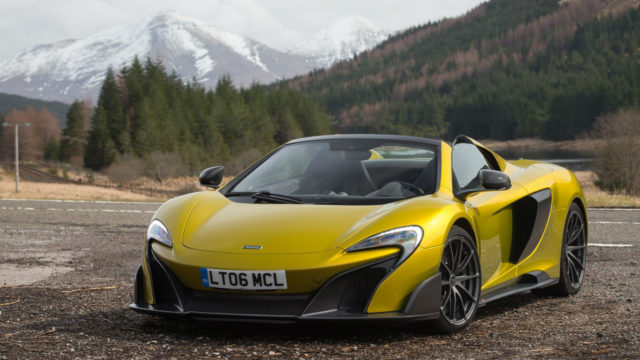 The 675 also bodes well as an opening salvo for the LT brand. Who could fail to be excited by the prospect of a Longtail version of the brilliant 570S? Or perhaps even a more extreme take on McLaren’s forthcoming ‘Ultimate Series’ car – the replacement for the P1. Ferrari is brilliant at producing harder, faster versions of existing models (the 458 Speciale and F12 tdf, for instance) and the 675LT proves the still-fledgeling McLaren Automotive can do the same. 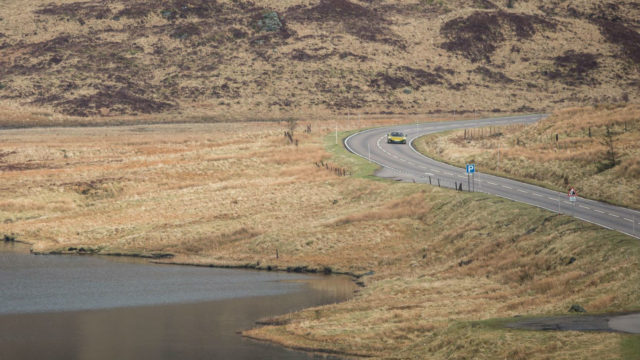 If you fancy a 675LT Spider in your garage, expect to pay upwards of £400,000. No wonder we felt a mild sense of relief when handing back the keys, followed by an overwhelming urge to drive it again. The car’s immediate appreciation in value shows the esteem in which it is held – and represents a tidy profit for first owners, of course. Still, even £400k looks decent value compared to the £10million you’ll need for a McLaren F1. Go on, make Chris Evans an offer he can’t refuse.