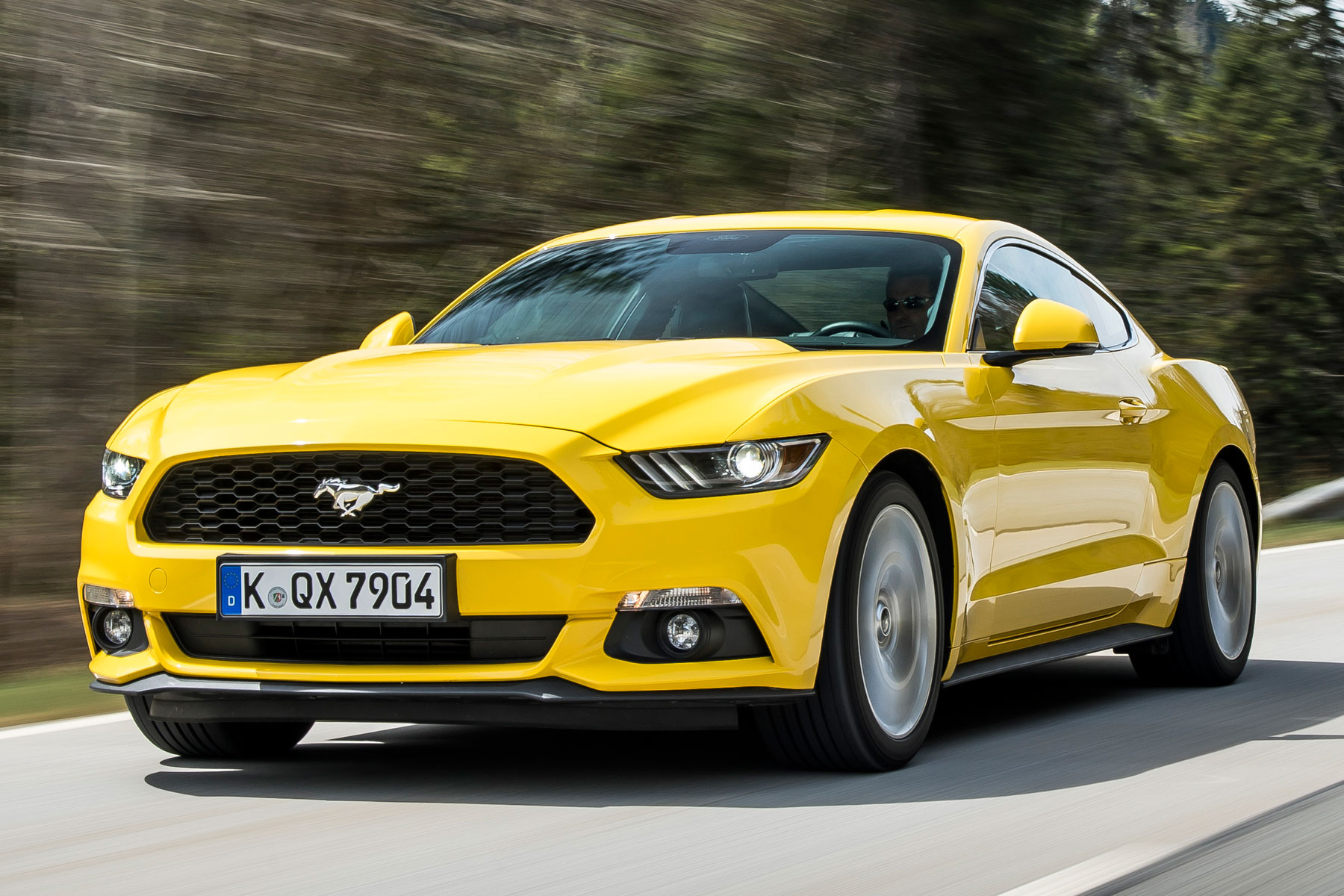 The Ford Mustang is finally available in Europe for the first time in its 50-year history. Was it worth the wait? Hell, yeah.

The 2.3-litre EcoBoost version of the new Ford Mustang is to the V8 what diet cola is to the real thing. The V8 is the culinary equivalent of a 16oz rump steak. With extra fries.

Make no mistake, the four-cylinder version is no layered salad with a sprinkling of jus. It’s just that once you’ve experienced the full-blooded, full-fat 5.0-litre V8, the entry-level Mustang just feels a bit inadequate. Some authenticity is lost and you’re left feeling a tad unfulfilled.

If this seems unfair on the 2.3-litre Mustang, take some solace in the fact that it’s not a bad car. It’s just that it feels a little more soft-focus, especially in convertible form as tested here. Such a label could never be attached to the V8, which is 100% hardcore.

It’s worth pointing out that our experience in the four-cylinder Mustang was limited to the convertible version, which is always going to feel more boulevard cruiser than B-road bruiser. Indeed, at £32,995, the Mustang EcoBoost convertible is a surprisingly affordable way to enjoy the levels of attention usually reserved for celebrities. 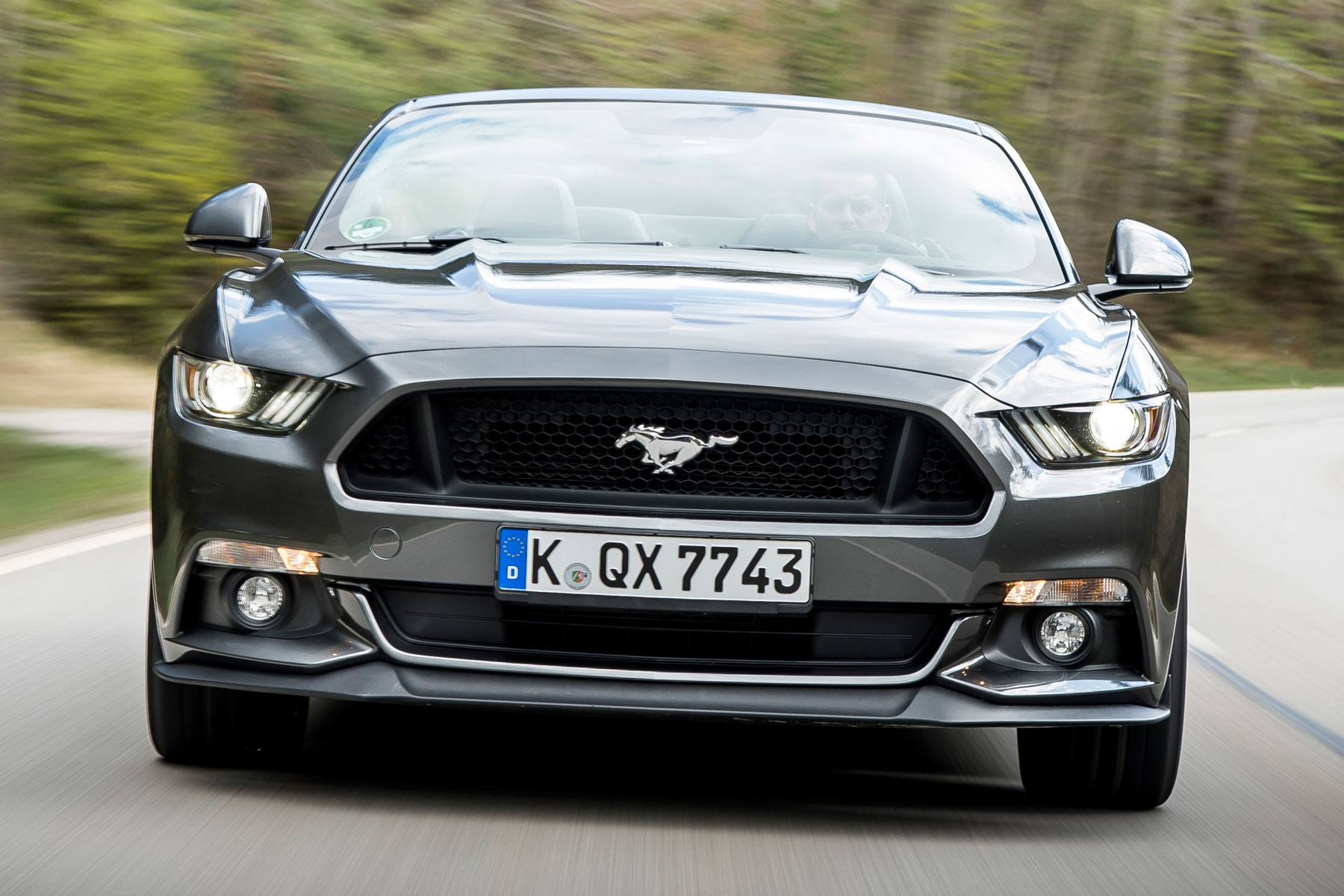 On the streets of the some immaculately presented Bavarian towns and villages, the Ford Mustang caused quite a stir. A schoolboy wandering home from school elbowed his mate and gestured across to the slice of Americana roaming through his hometown. A commuter in a Passat quite literally stopped his car in the middle of the road to grab a photo on his smartphone. Other people simply smiled, while some gave us the full thumbs up. We even got a wave from an excitable blonde lady in a fifth generation Mustang. You tend to attract gestures of a different kind in an Audi S5.

So if Ford is looking for kerb appeal – which, of course, it is – the chaps in Michigan can consider it a job well done. Indeed, UK buyers must like what they see because 1,200 customers have pre-ordered a new Ford Mustang without even driving one. Such is the initial demand, if you placed an order today you’d have to wait until April 2016 to get behind the wheel. That said, we’ve waited 50 years to get our hands on a European-spec, right-hand drive Mustang, so what’s another few months?

It’s all too easy to get lost in the positive glow that surrounds the Ford Mustang. The original pony car joins an elite group of cars that are known around the world simply by their ‘surname’. And yes, we may have been guilty of being overawed by the sense of occasion. But hey, we’re enthusiasts too and being amongst the first of a small group of journalists to drive the first European Mustang is kind of a big deal.

What’s the Ford Mustang Convertible 2.3 Ecoboost like to drive? 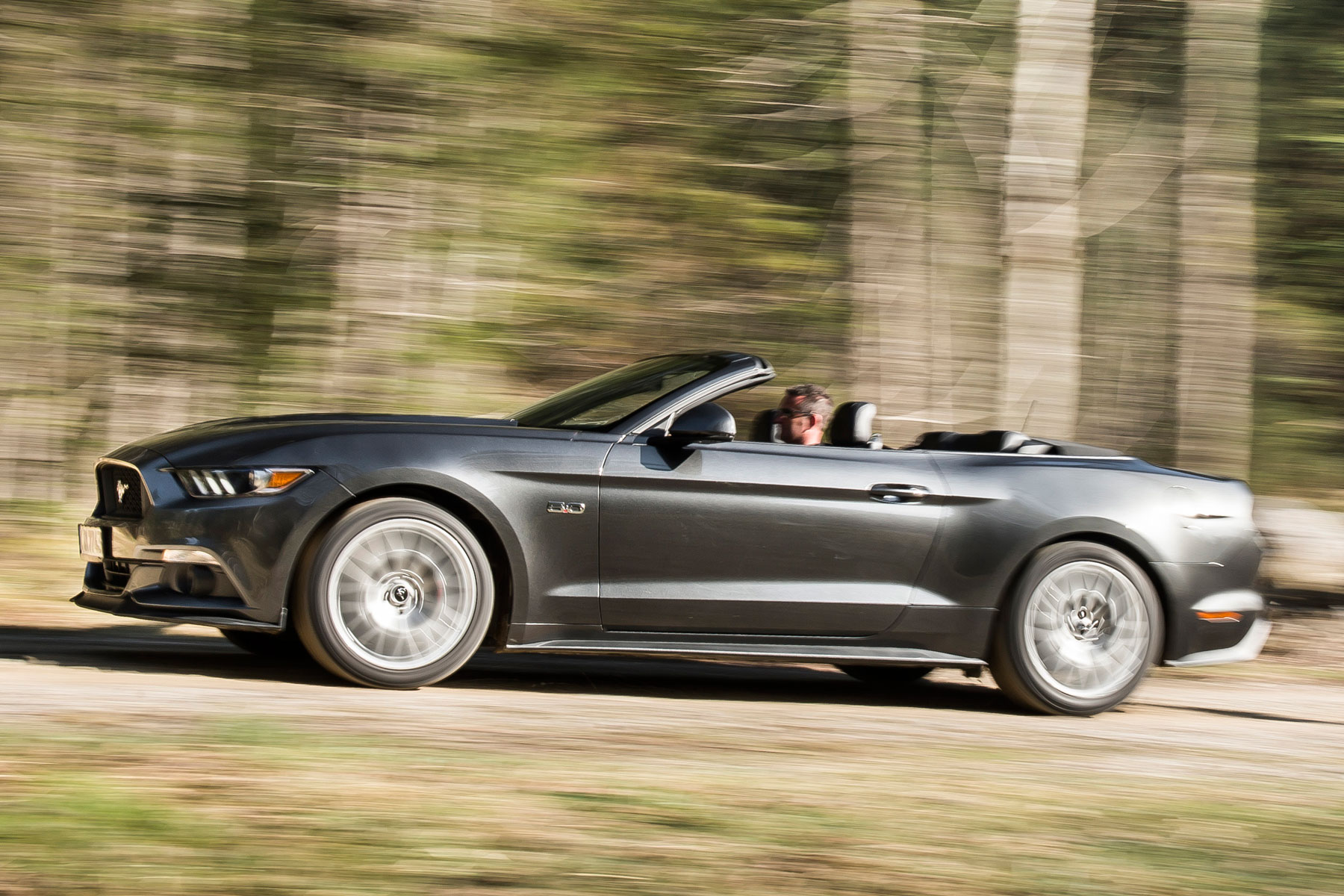 We started with the Mustang convertible – the hors d’oeuvres prior to the V8 main course.

That said, the first impressions are very good. There was always a concern that the Mustang’s perceived bargain basement price tag would be reflected by a low-rent interior, but that’s not true. Sure, it’s not the last word in quality, but it’s on a par with other Fords. Even the cheap-feeling aircraft-style toggle switches and the slightly strange heater controls seem in keeping with the Mustang’s overall style. And the ’Since 1964’ badge is a constant reminder – to the passenger at least – that the Mustang has a bucket-load of heritage resting on its shoulders.

Twisting the roof-mounted lever and pressing the associated button sees the windows lowering and roof disappearing within a few seconds. Now you can enjoy the full glory of the 2.3-litre, four-cylinder EcoBoost engine. Or then again…

In fairness, Ford has done a good job of creating an artificial soundtrack to pump into the cabin. For the most part, it sounds good and you could question whether you’d miss the burble of the all-American V8. But occasionally it sounds out of step with the real engine note, shattering any illusions you may have had. The Mustang just can’t lip-sync with the best of them.

The jury is also out as to whether it’s a pleasant sound. Some people we spoke to liked it, others simply hated it. Some said it sounded better inside the cabin, others thought it was better from the roadside. Our conclusion? Try it for yourself. 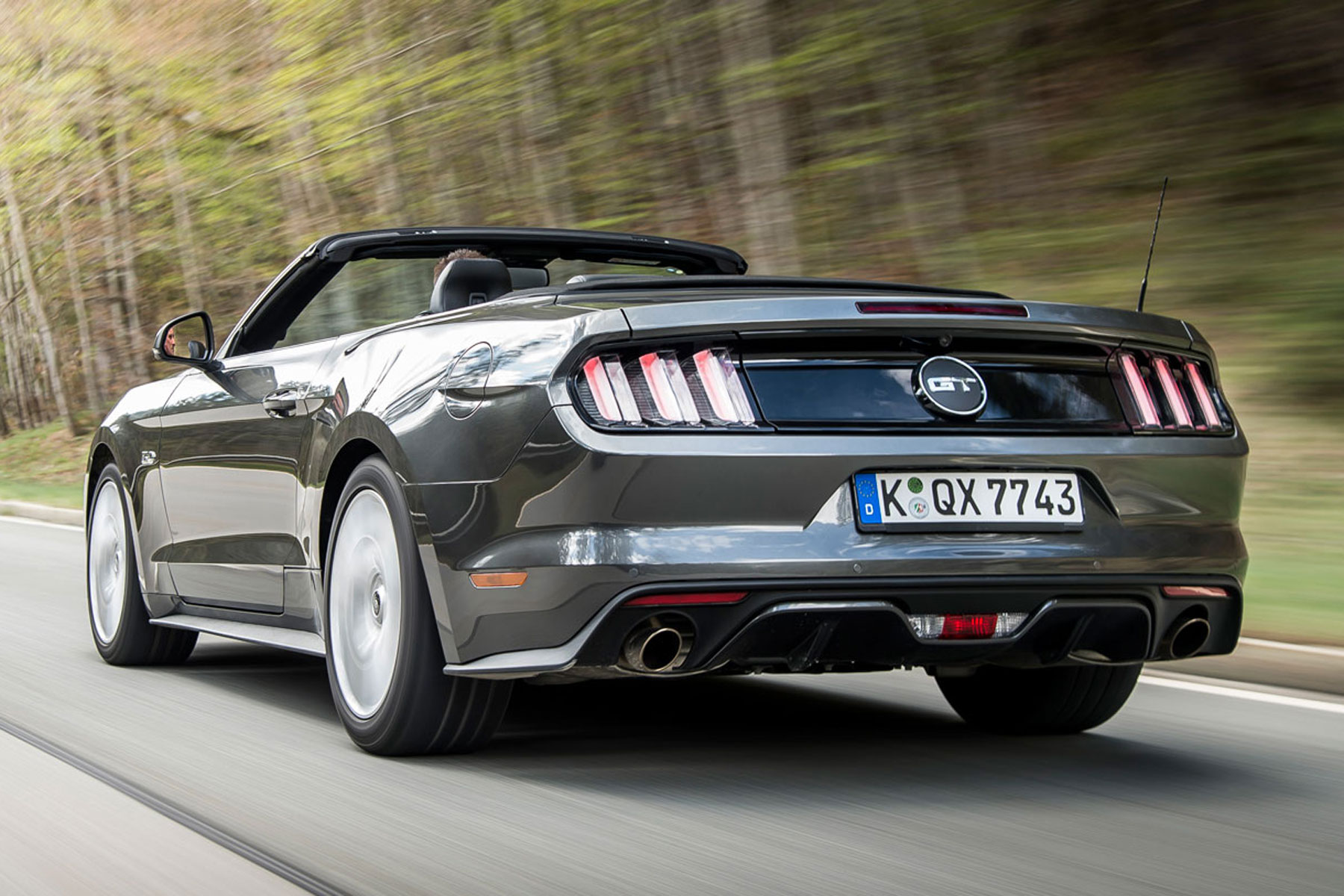 The engine itself will be used to power the all-new Ford Focus RS – hardly sloppy seconds territory. In the Mustang it produces 309hp and 320lb ft of torque, so it’s no slouch. It’s enough to propel the Mustang along at a pretty decent lick and the power is delivered in a smooth, almost creamy manner.

For the most part, the Mustang Convertible is a relaxed and feel-good type of car. The six-speed short-throw gearbox is a delight to use and you sit low in the cabin, hugged by a pair of wonderful Recaro seats. It’s only when you decide to take the Mustang by the scruff of the neck that it starts to throw a wobbly.

Chuck it into a corner and the body starts to flex and roll, even with the extra stiffness Ford claims to have applied to the European Mustang. There’s a definite knack involved with driving the Mustang Convertible, with a strong emphasis on smooth and controlled inputs. Boulevards are meant for cruising and you’ll need to remember that. Switching the steering and driving modes to Sport improves things immeasurably and should be the default setting. It’s just a shame the driving mode reverts to Normal each time you turn off the engine.

Few people will want to tackle a German Autobahn at speeds well in excess of 100mph with the roof down, but should you want to, it is possible. As you’d expect, there’s a fair amount of buffeting at motorway speeds, but it’s still possible to hold a conversation. Most of the time you’ll be talking about the bonnet, which – no matter what Mustang you’re driving – rises up and starts to shake. The first time this happened we were forced to take an Ausfahrt, concerned we were about to see the well-sculpted bonnet disappear over the roof before landing on the Audi A6 behind.

By the end of day one we felt we had explored all there is to explore in the Mustang Convertible. A slow crawl around the well-manicured banks of Lake Tegernsee suited the mood. A four-cylinder convertible Mustang is the soft-focus pony car we thought it might be. But it simply cannot hold a candle to the V8 version.

What about the Ford Mustang Fastback 5.0 V8? 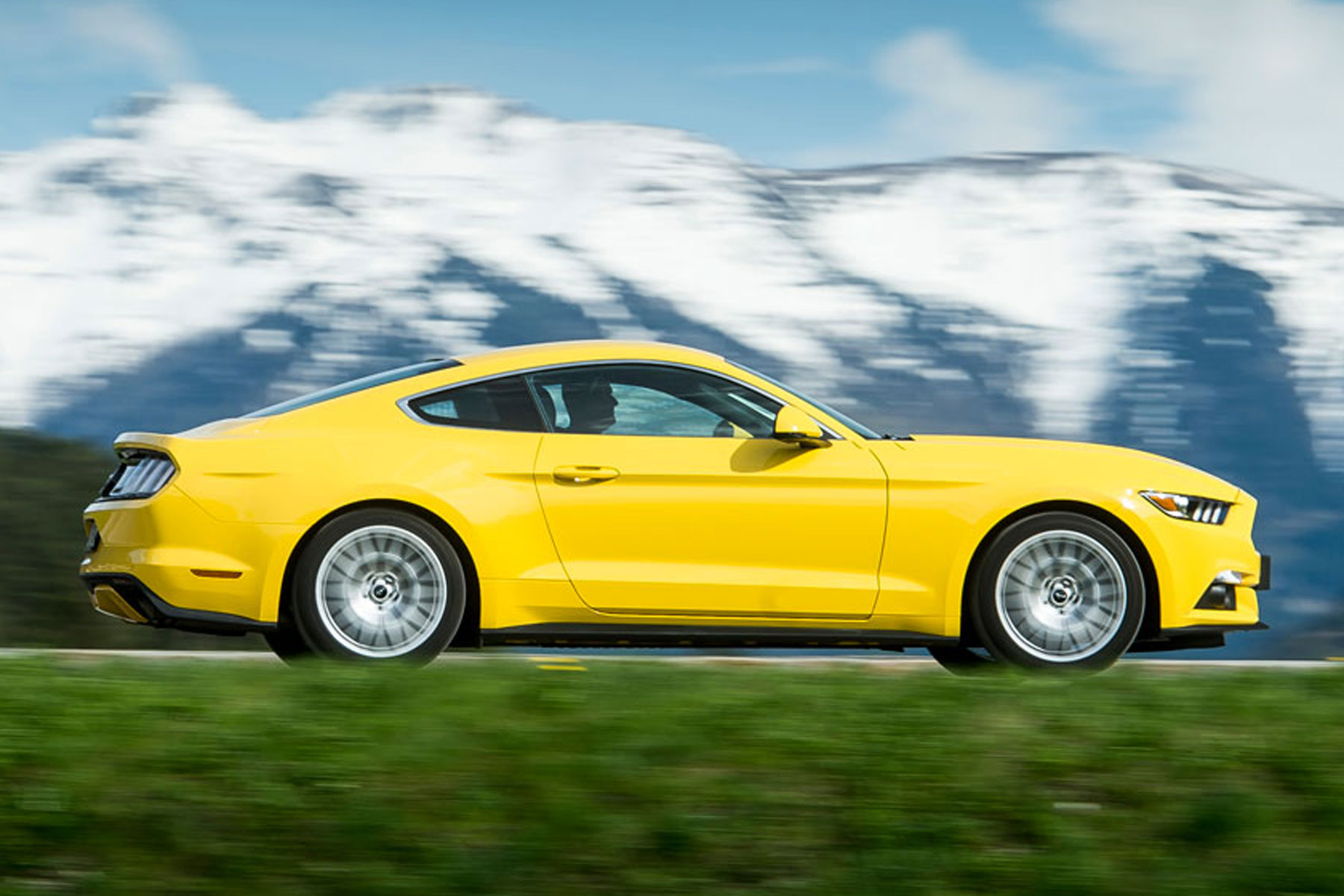 First impressions are very, very good. The Mustang fastback manages to eclipse the convertible in the style department, being well proportioned and offering just enough hints of the original Mustang of 1964. Pressing the start button stirs the 412hp 5.0-litre engine into life and the entire car seems to shake with anticipation. You can’t help but smile.

This feels like the real deal. Weirdly, the huge amount of power available at your right foot seems to increase the width of the car, probably because you know that even the slightest input could unleash hellish fury. But it’s not the untamed jackhammer you might think. It’s actually possible to drive this V8 Mustang with restraint.

The 0-62mph time of 4.8 seconds tells you all you need to know about the Mustang’s off-the-line potency and there’s a selection of ’Track Apps’ – such as Launch Control and Line Lock – to help you get the best start in life. But the way in which the Mustang V8 switches from brutish to relaxed is to be applauded. You could live with the Mustang GT on a daily basis, assuming you can stomach the 20.8mpg. 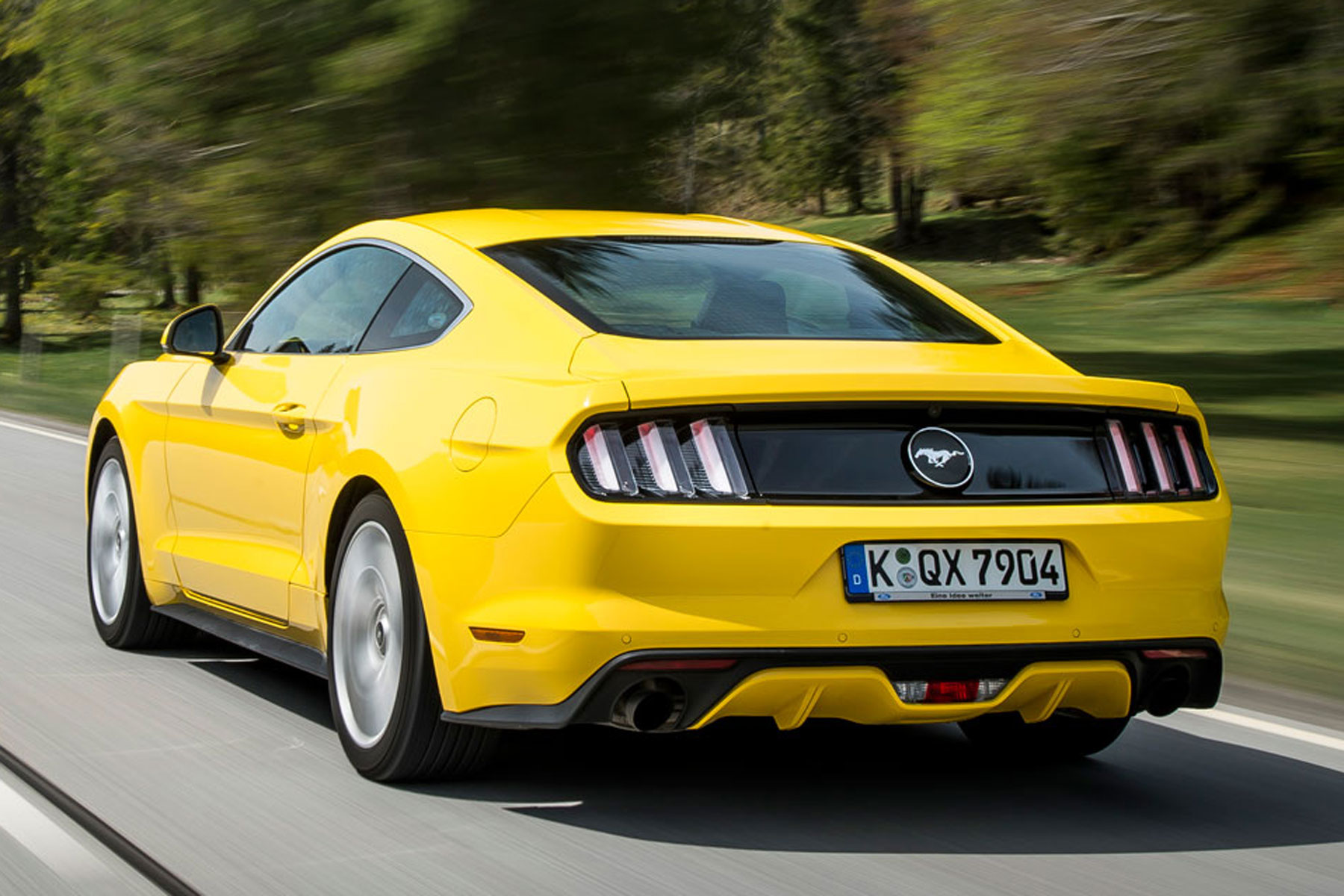 Everything feels better in the V8. The soundtrack is – unsurprisingly – more authentic, the steering feels meatier, the ride is more composed and the delivery of power is more predictable. It actually takes some effort to get the back end out of line, but the first time you do, it’ll require all your willpower to stop yourself from letting out a ‘yeehaw.’

If you’re looking for razor-sharp dynamics and driving perfection, look elsewhere. The Mustang V8 offers old-school pony car charm, suitably – if not, subtly – updated for 2015. For some reason the gearbox felt more agricultural in our V8-powered Mustang, yet this only added to the appeal. There’s a dollop of driveline shunt served at regular intervals, but again, this seems in keeping with the Mustang’s proposition.

At rest, the Mustang V8 will tick, knock and rattle as it cools down, like a beast following a hard-fought battle. Purposely or otherwise, by retaining some of the Mustang’s imperfections, Ford has managed to create a car with more character. Few cars – at any price – offer a feel-good factor quite like the Mustang V8. You’ll want to drive this again and again. A fact that will see you forming a close bond with your local petrol station, but perhaps not with your bank manager.

Is the Ford Mustang worth the cash? 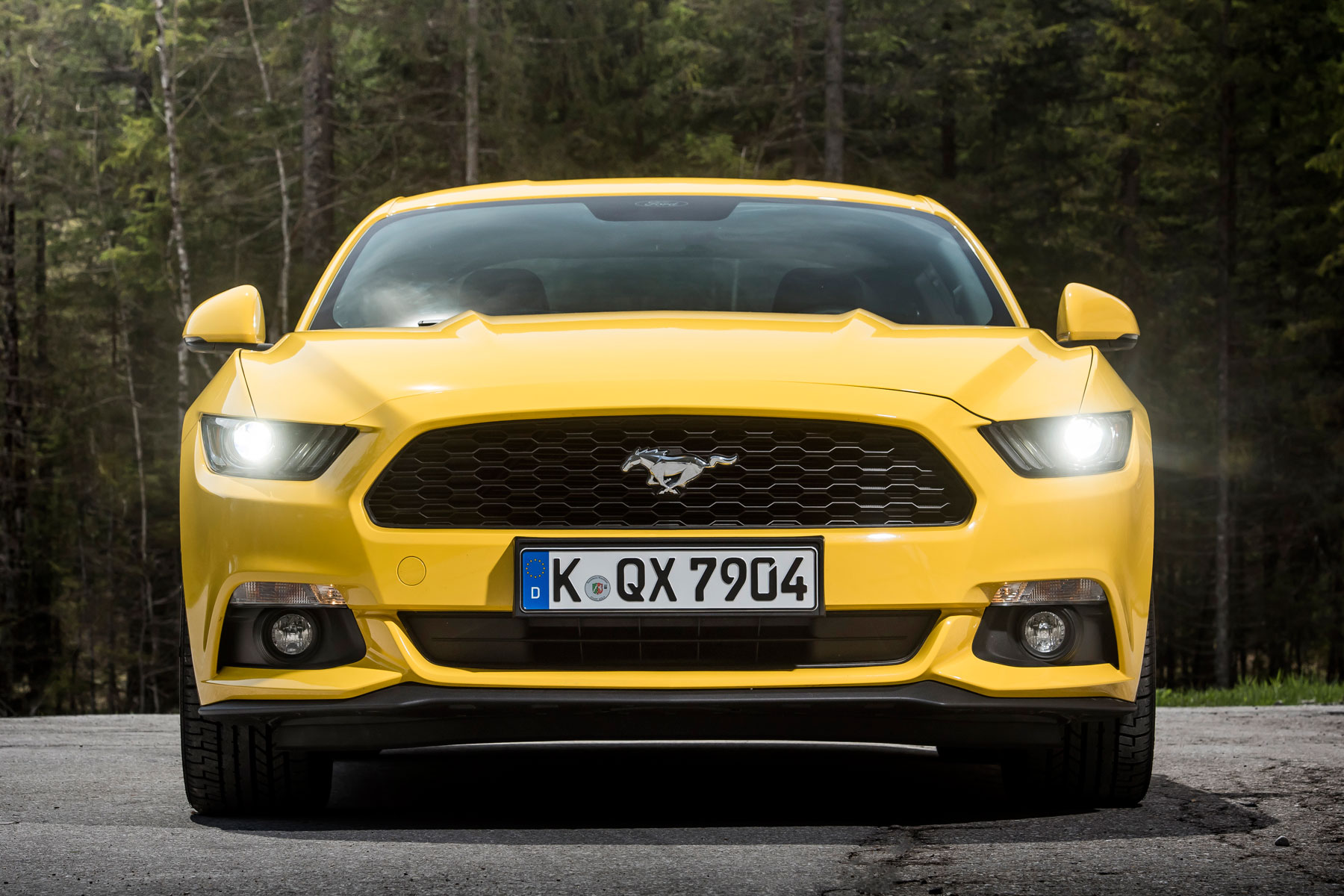 On paper we thought the £32,995 Ford is asking for the V8 fastback was a bargain. Now we’ve driven it we reckon it’s a steal. To say it’s x cheaper than this or y more expensive than that is missing the point. The Mustang doesn’t have any rivals as such. A potential Volkswagen Golf R buyer will still want the Golf. A Cayman buyer will still want a Cayman.

Once the dust has settled and the 1,200 enthusiasts have taken delivery of their new Mustangs, it will be interesting to see how the Mustang will sit in the UK. It’s a car you could use on a daily basis, heck there’s even enough room for two sets of golf clubs in the boot. But you will need to make one or two sacrifices.

The rear seats offer next-to-no legroom, the first-year road tax will cost £1,090 and we reckon you’ll struggle to economy in the mid-teens in the real world. And it’s a definite all or nothing car. By which we mean you’re constantly aware of that V8 engine burbling away in front of you. The novelty could wear off after a while. 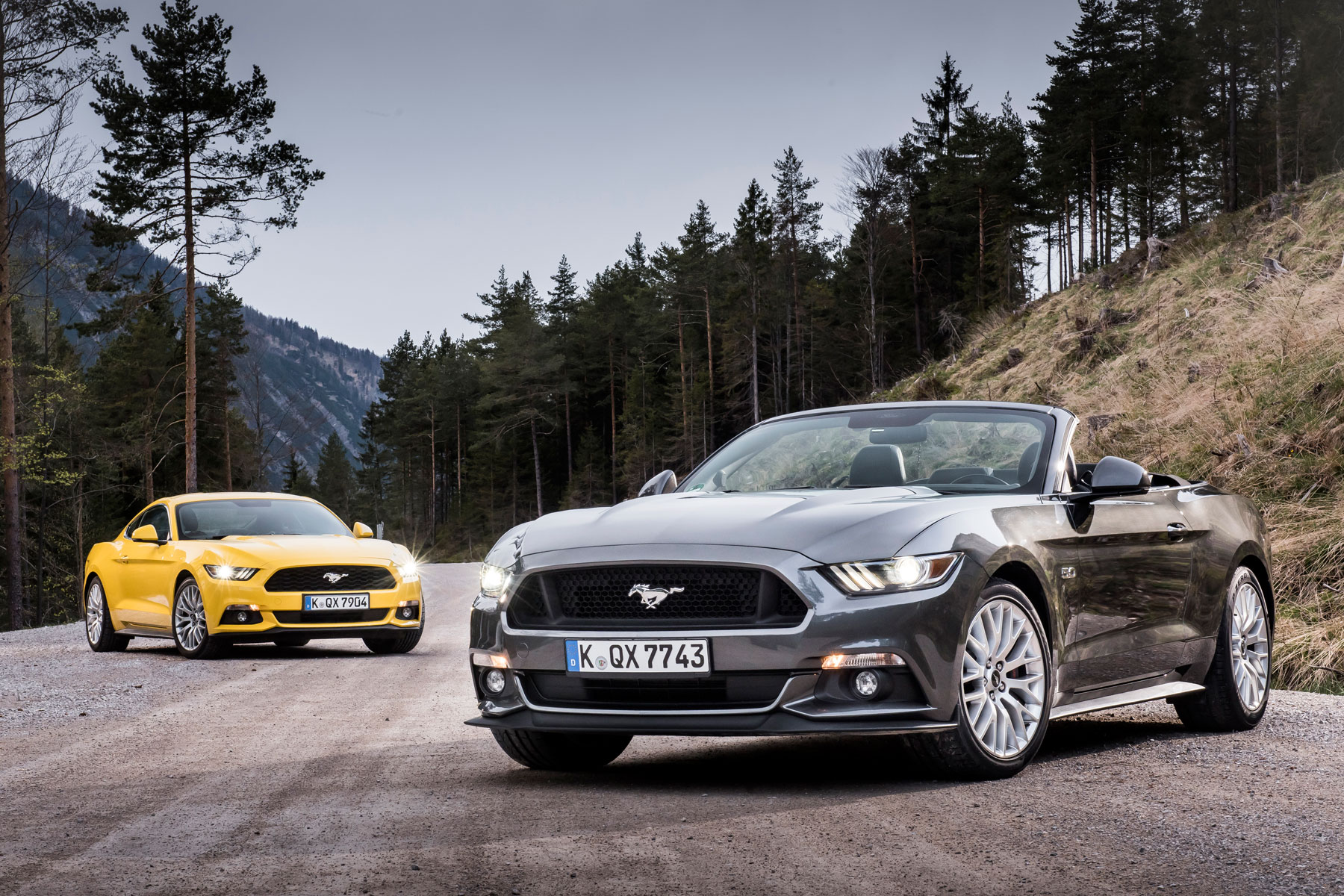 We’d be prepared to take that chance. It may have taken Ford 50 years to give us a Mustang, but perhaps it was just waiting for the right moment. On this evidence, it was worth the wait.

The pedants among you will have noticed we’ve used the word ‘feel’ on no fewer than 11 occasions in this review. Thats comes as no surprise, because this is a feel-good car. You will order a Ford Mustang for emotional, often irrational reasons. Nobody needs to buy a Mustang, but spend time behind the wheel of a V8-powered Mustang and you’ll wonder if you’ll be able to live without one. It makes you feel special, in a way few cars costing sub £100k can do.

Its imperfections simply add to its appeal. And if that feels like us trying to justify its all-round brilliance, so be it. Just do yourself a favour and order a V8 fastback. The Americans will salute you for it.

Does the Ford Mustang really have any true rivals? Many people will find it appealing for the way it makes them feel, almost as much as the way it actually drives. For the money, it’s almost hard to beat. In fact, you could increase the price further and it wouldn’t lose any of its charm. So producing a list of rivals will depend on whether you’re looking to pose or hoping to do a few tracks days. Equally, it will depend on whether you want a fastback or convertible.