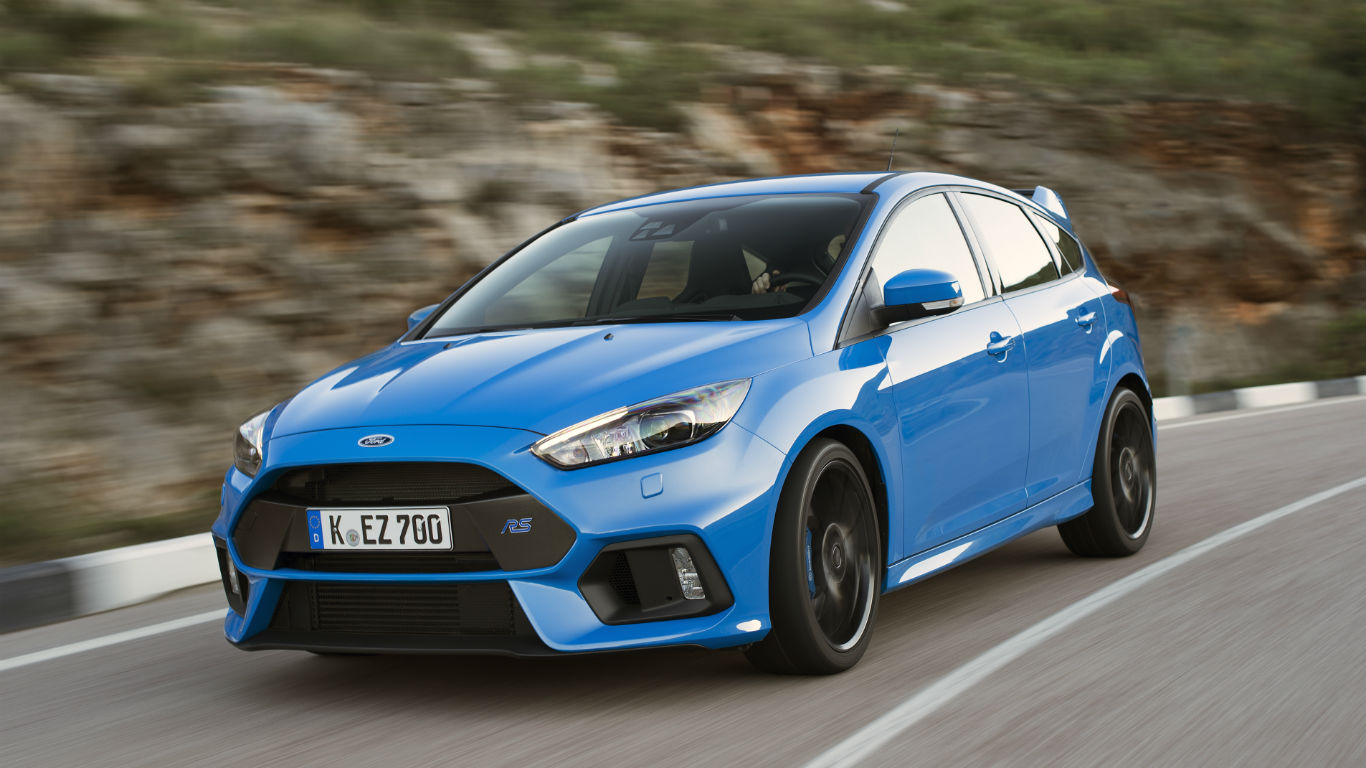 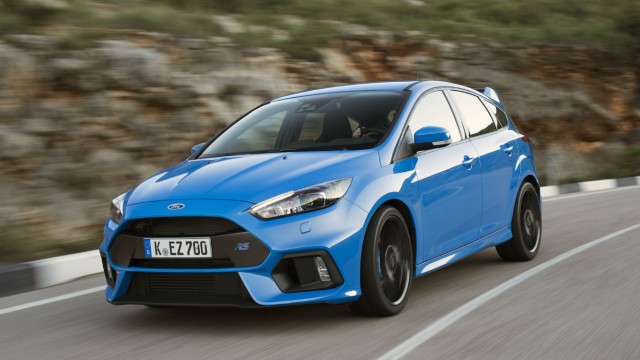 If the Golf GTI is a middle-class manager in a tracksuit, the Ford Focus RS is a hooligan with a hatchback. It’s a rough diamond, a car your mother probably wouldn’t like.

Well, that’s the perceived wisdom anyway. But while the fastest Focus has always been something of a blunt instrument, this third-generation car is a more sophisticated beast.

For starters, it has four-wheel drive with torque vectoring between the rear wheels. In theory, that should banish memories of the Mk1 Focus RS’s tyre-scrabbling torque steer for good.

It also looks relatively subtle. There’s no outrageous bodykit, no whale-tail wing and no fluorescent green paint. Indeed, this is the first Focus RS without custom, RS-specific body panels.

Even the interior is pretty restrained. A pair of Recaro sports seats, a smattering of extra gauges atop the dashboard – and that’s your lot.

For all its ferocious performance, one of the most impressive stats about the Focus RS is its price. At £29,995, it costs the same as the 310hp front-wheel-drive Honda Civic Type R – and £1,780 less than the 300hp Volkswagen Golf R (five-door hatch).

Clearly then, this is a car of contrasts. Has the ASBO Focus finally grown-up? And if so, is that a good thing? Only one way to find out… 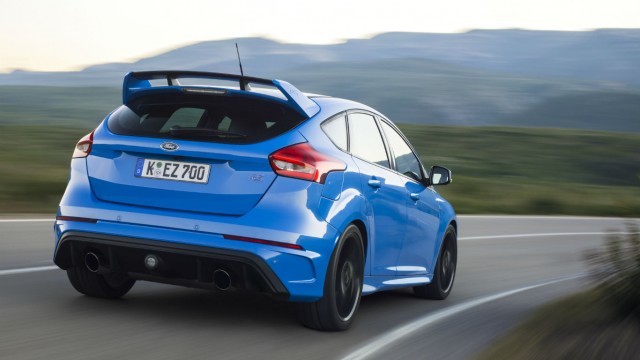 Former Stig Ben Collins describes the RS as having “the beating heart of a rally car.” And while some say that, as a paid test-driver for Ford, he may be biased, the Top Gear star does have a point.

You see, rally cars are adept at going sideways. Years of watching tail-wagging Mk1 and Mk2 Escorts – the Focus’s ancient ancestors – has taught us that. And, after a tyre-smoking track session in Valencia, it’s clear the RS will go very sideways indeed.

Selecting Drift Mode gives the 4WD system a rearward bias, softening the dampers for lurid, laugh-out-loud slides on demand. It’s progressive, easy to control and fabulous fun. Especially if somebody else (i.e. Ford) is picking up the tab for new tyres.

Fortunately, the Focus RS is just as impressive in the real world – perhaps more so. Throw it into a corner and it simply grips, with layers of fine-tuned feedback fizzing through the steering wheel and awesome 4WD traction as it slingshots you away.

Best of all, it has a smidgen of rear-wheel-drive attitude. So instead of understeering (running wide) when you push it hard, the tail-end nudges subtly sideways. It’s a remarkably easy car to drive fast. 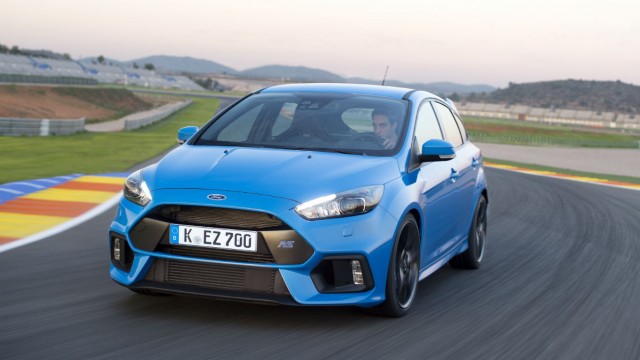 And boy, is it fast. Use the Launch Control function – which holds the revs, then dumps the clutch for a full-bore getaway – and it literally thumps you in the back. And unlike some turbocharged engines, it doesn’t run out of revs; power keeps on coming, all the way to the 6,500rpm redline.

It sounds pretty special, too. The engine growls menacingly, while the two drainpipe-sized exhausts spit and pop on the over-run. Balding boy racers (and we’re including ourselves there) will love it.

Downsides? Well, the ride is predictably firm on stiffened suspension and standard-fit 19-inch alloys. It’s less hyperactive than a Fiesta ST, though – we could certainly live with it.

Also, unlike the VW Golf R, there’s no semi-automatic gearbox option; you’ll have to swap cogs yourself. But seriously, we could live with that, too. 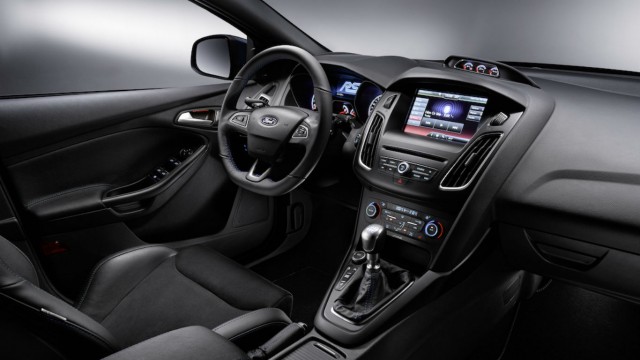 Remember the original Mk1 Focus RS interior? If you do, you’d probably rather forget it. Bright blue stripes on the seats, doors and steering wheel meant was decidedly more Halfords than, er, Harrods.

Thankfully, the Mk3 RS is considerably classier. Recaro sports seats, similar to those in the Fiesta and Focus ST, are the most obvious departure from the common-or-garden Focus. Our car, however, had the race-style Recaro buckets – an expensive option at £1,145.

Side-squeezing seats aside, this is still a Ford Focus, which means a comfortable driving position, decent all-round visibility and enough room for five adults. Admittedly, the rear diff means there’s less luggage space than a regular Focus, but there’s no doubt you could run one as a family car. And trust us, your kids would love you for it.

There are tempting fripperies, too, such as blue-painted brake callipers (£100), black alloy wheels (£595) and that signature Nitrous Blue paint (£745). You’ll need iron resolve (or just shallow pockets) to keep your RS down to that headline-grabbing £29,995 price tag. 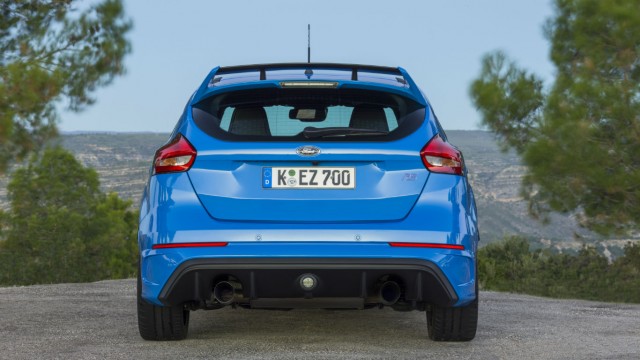 We know the Focus RS is relatively affordable to buy. But then so is a 20-year-old Bentley – that doesn’t mean it won’t break the bank when it comes to running costs.

The first hurdle for many potential RS owners to get over will be a group 40A insurance rating. If you’re under 25, you might as well as well stop reading now.

On the plus side, the 2.3-litre Ecoboost petrol engine doesn’t require a Bentley-sized budget when it comes to fuel. Official economy is 36.7mpg, with CO2 emissions of 175g/km. That equates to car tax of £375 in the first year and £205 per year thereafter.

Oh, we forgot mention the second hurdle: driving the RS sensibly enough to get anywhere near the economy figures promised. We barely scraped 20mpg, although our test route was littered with fabulous mountain roads and we didn’t spare the horses. Well, would you?

Ford RS models have cult status among car enthusiasts, and that – combined with limited production volume – means resale values are likely to be strong. Just look at how prices for the Mk1 Focus RS are now creeping upwards.

If you’re one of the 2,300 UK buyers who has already placed a deposit, you might even make a short-term profit. Latecomers to the RS party will doubtless be keen to jump the queue… 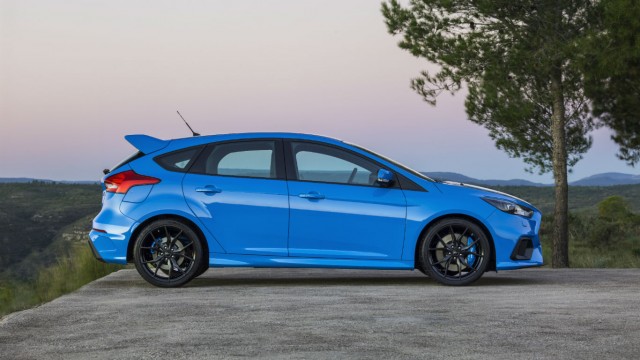 After two days of intensive driving in the Focus RS, we’re still buzzing. Handing back the keys at Valencia airport felt genuinely painful.

Ford has kept us waiting a long time for this car, but it doesn’t disappoint. It’s something quite special, a genuinely five-star hot hatch that takes its place alongside the Fiesta ST, Escort Cosworth and other notable fast Fords in the pantheon of greats.

Ford chassis engineer Richard Parry-Jones famously said that a lot could be learned about a car in the first 50 metres of driving. The Focus RS has that inherent ‘rightness’ in its control weights and responses – and that makes it enjoyable drive at any speed. Yes, a deserted Spanish mountain or private race track probably helps, but they’re certainly not essential.

Lest we forget, there are some very capable rivals out there. You may prefer the sober styling and nicer interior of the VW Golf R, or the indeed the frenetic high-rev thrills of the Honda Civic Type R.

For our money, though, nothing this side of BMW M135i matches the dynamic panache of the RS. And the BMW is £2,500 more expensive and markedly less practical.

The Focus has grown-up… a little. But it’s still one of the quickest, most visceral and most downright exciting cars on the right side of £50,000. And your mother still won’t like it. Amen to that.

What the others say

Can the new 345bhp #Ford Focus RS live up to its on-paper promise? We find out: https://t.co/rKT4X6LMUC pic.twitter.com/QHtHwPAQVT