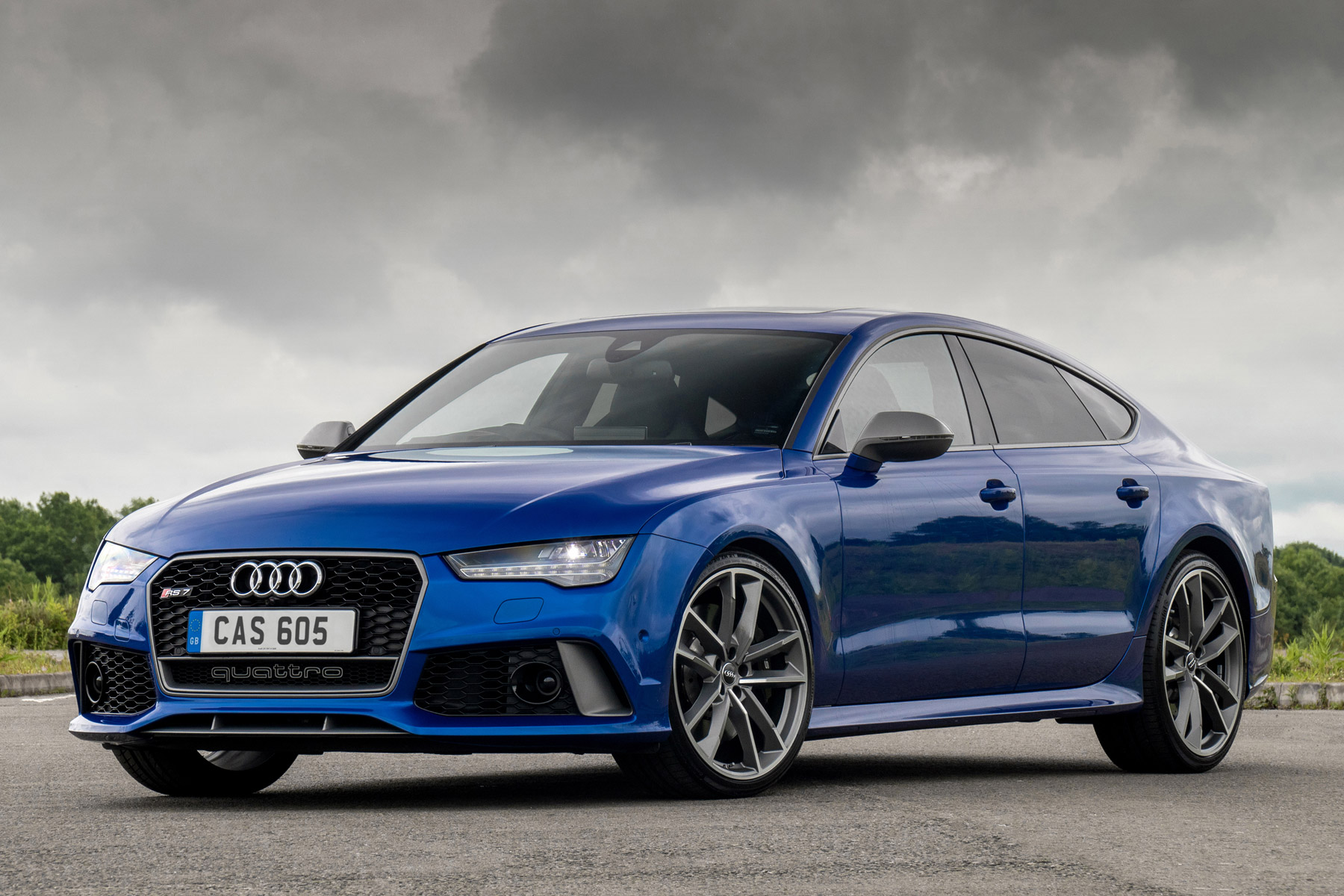 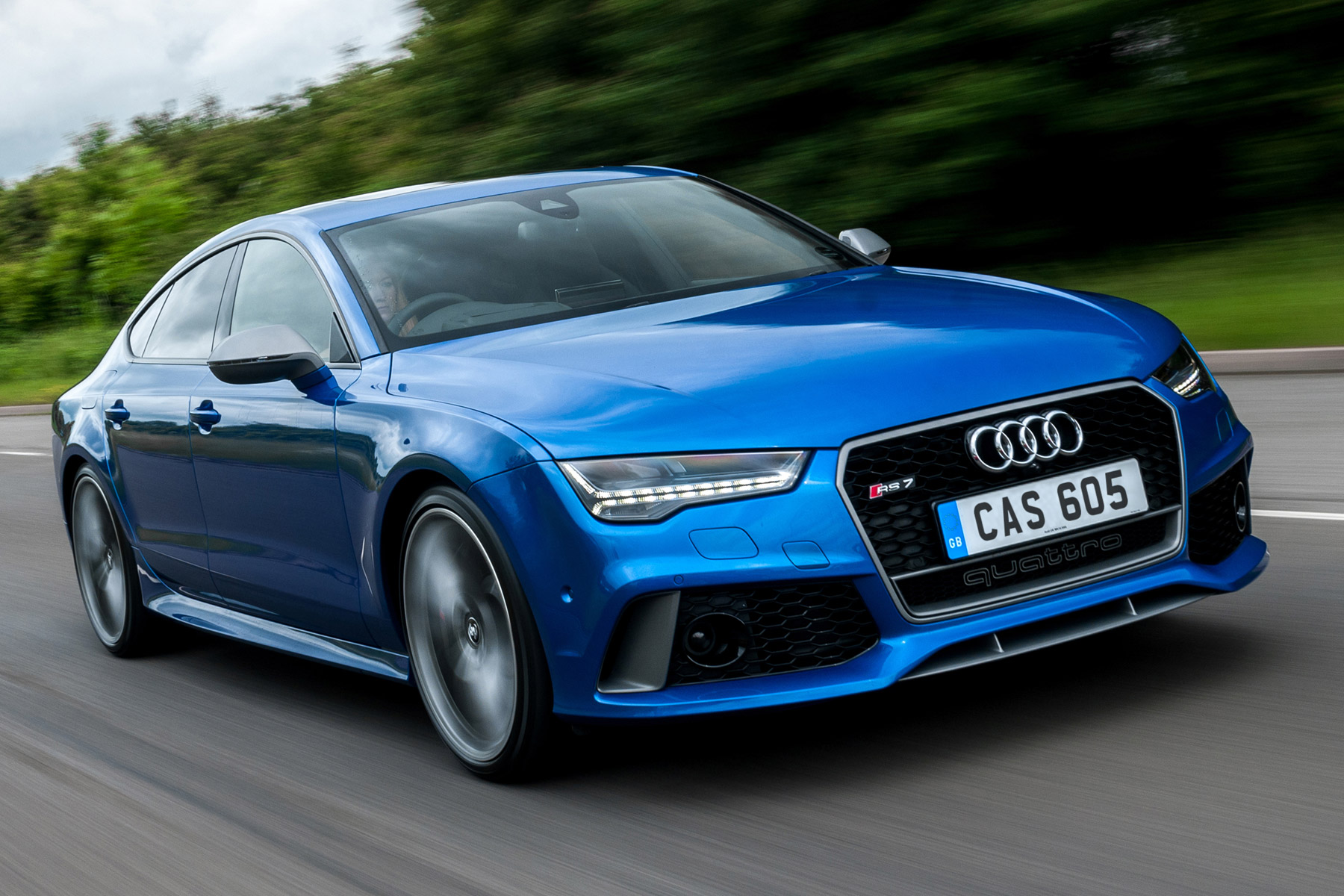 The RS7 performance boasts a power increase of 45hp from its 4.0-litre twin turbo V8, shaving 0.2 seconds off its 0-62mph time. It also sports a fancy overboots function, which can increase torque when required to a hefty 553lb ft.

At £92,060, the RS7 Performance squares up against the BMW M6 Gran Coupe and Mercedes-AMG CLS 63. There’s also the Porsche Panamera, but you’ll have to spend more than £130,000 on the Turbo S to get acceleration similar to the RS7 Performance. 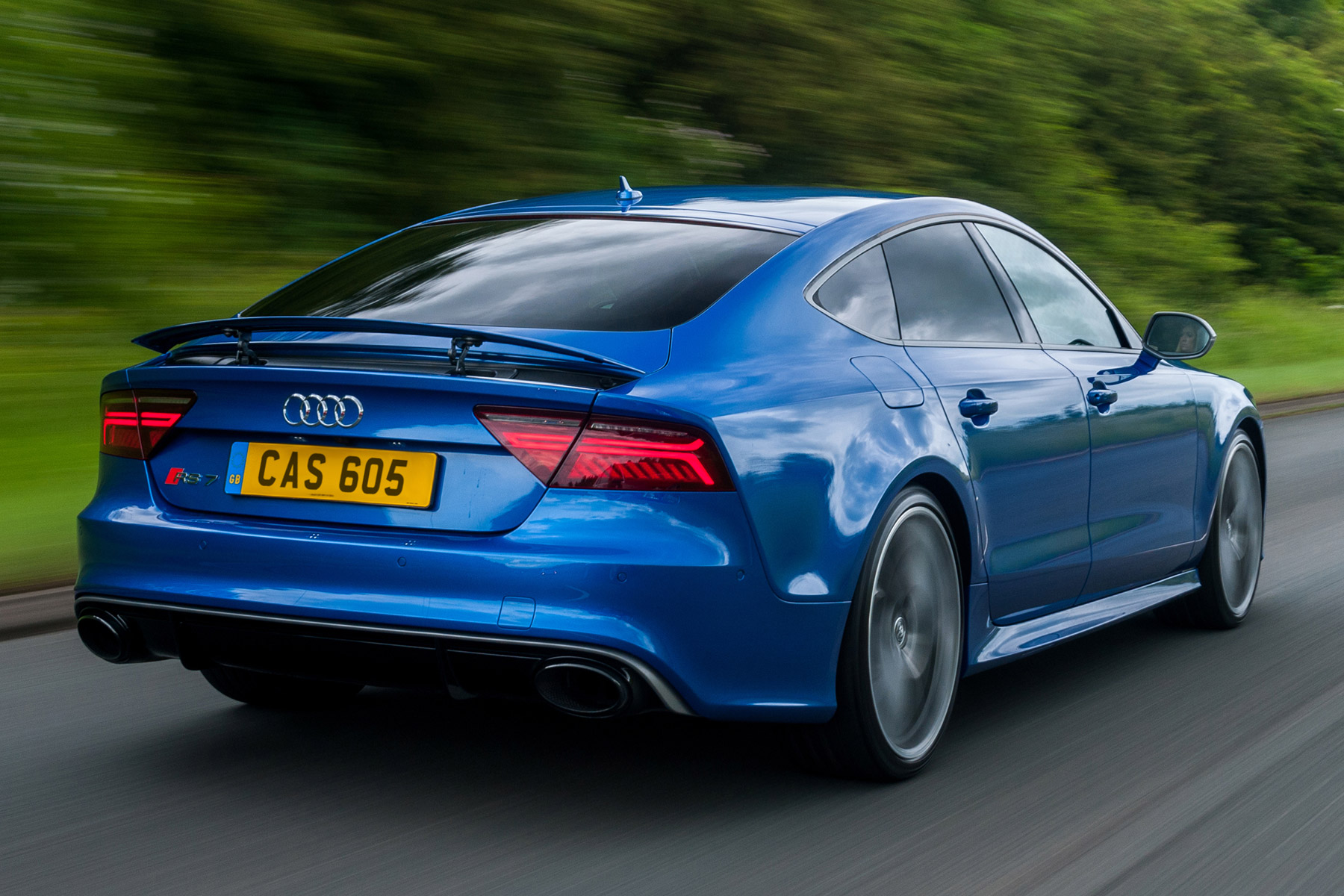 Ferociously fast. Like, supercar fast. Go hard on the throttle and it just obliterates everything else on the road this side of an Audi R8.

Select ‘dynamic’ mode in the Audi driver select and it sharpens everything up – including the throttle, steering and suspension. While it almost goes without staying that the RS 7 Performance is ridiculously quick in a straight line, it’s impressive how much it shrinks around you in the corners.

Its Quattro all-wheel-drive system gives you all the confidence you need to make progress whatever the conditions. It ordinarily runs a slight rear-drive bias, but shifts torque between all four wheels when required. The brakes (upgradeable to ceramics if you wish), are incredibly meaty and will scrub speed off pleasingly quickly. The only thing that’ll make you back off through corners is the complete lack of feedback through the steering wheel – a frustrating trait of fast Audis.

The Performance is fitted with a sports exhaust as standard, and in Dynamic mode it’ll pop and bang like a true supercar. Driving through villages, little old ladies look terrified while others look very confused about whether all that noise is coming from a five-door Audi.

The really impressive thing about the RS7 Performance is how docile it is when required. Shift to Comfort mode, trickle the throttle and it’ll transform into a much more relaxed motorway muncher. Thanks to the air suspension, fitted as standard to the RS7 Performance, the ride is good – despite the 21-inch alloys. 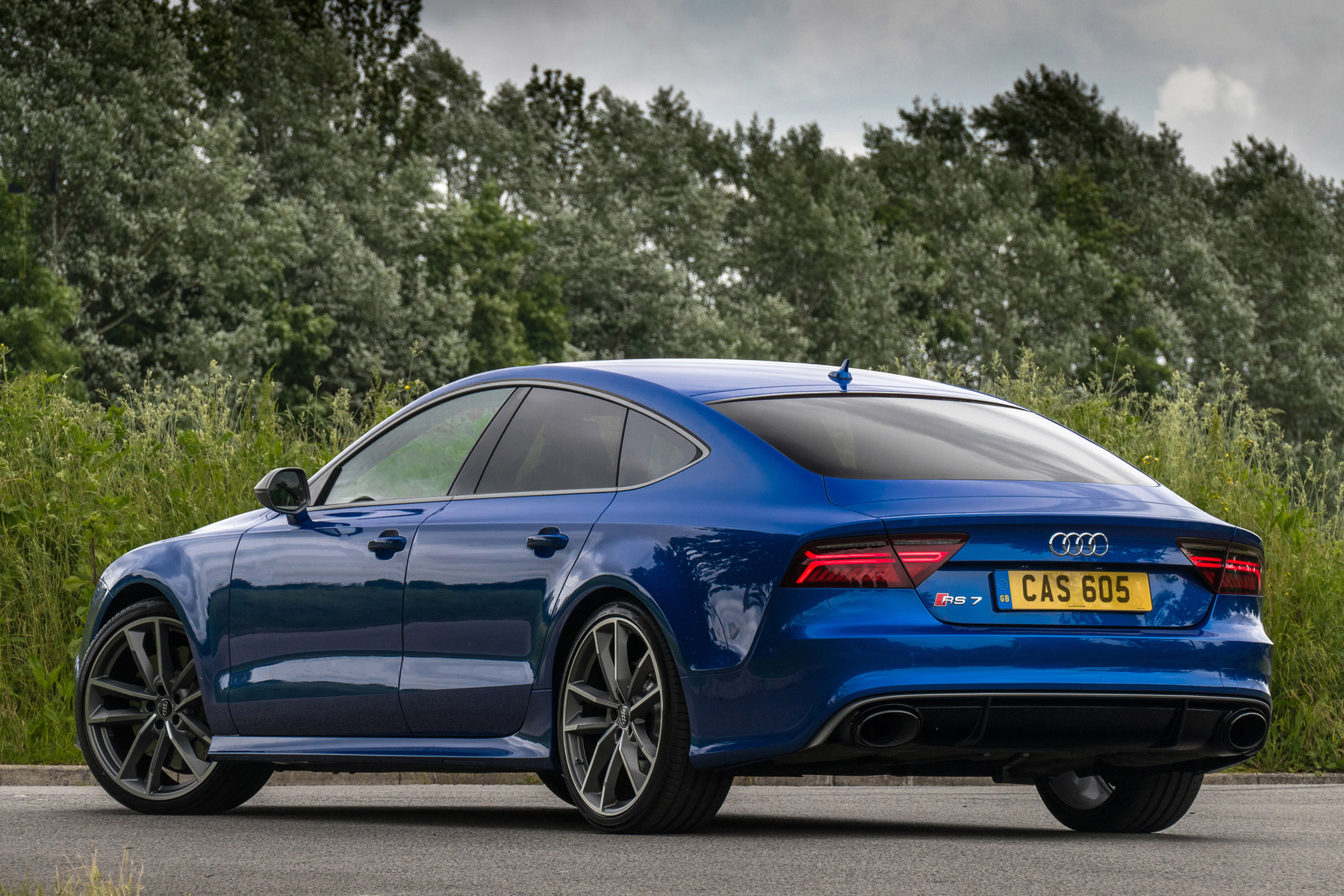 Are you kidding? Officially the RS7 Performance will return 29.7mpg. It might, with a seriously restrained driver behind the wheel. Realistically, you’re going to be happy to see anything more than teens. CO2 comes in at 221g/km, meaning you’ll pay £640 in road tax for the first year, and £290 a year thereafter.

The interior of the RS7 is a thing of beauty. Audi’s interiors are among the best, and even though it’s visually very similar to the regular model’s cabin (fancy seats aside), you won’t be left in any doubt that you’re sat in a very expensive car. It’ll sit four adults in comfort, and its 535 litres of boot space should be plenty for most. If you need more, buy its estate equivalent, which we’ll come to shortly… 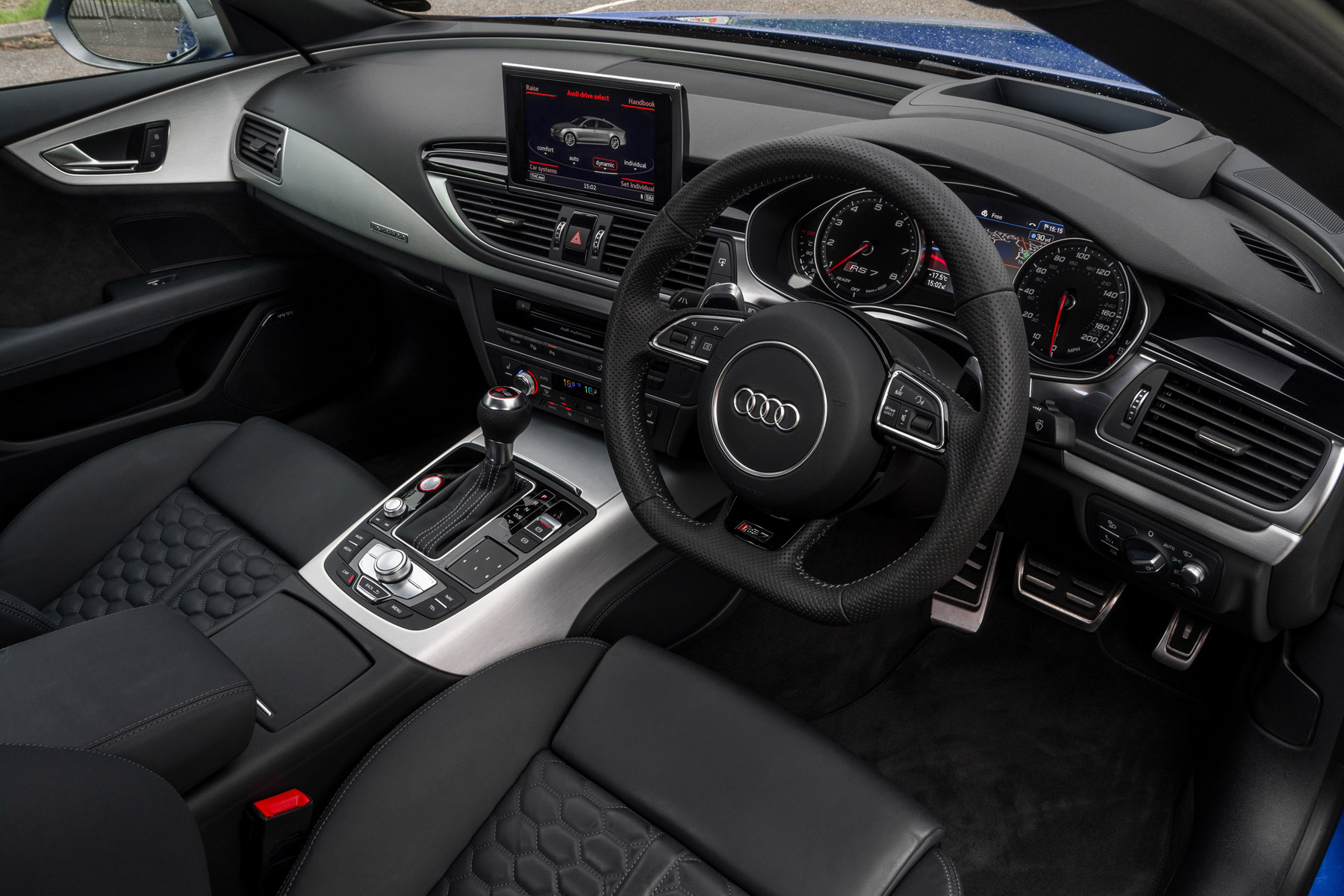 Euro NCAP hasn’t tested the RS7, but it’s safe to say (see what we did there?) it’d be a surprise if it scored anything less than five stars. Audi engineering combines with the plethora of safety tech as standard, meaning the RS7 Performance is probably a relatively nice car to crash. Apart from the fact you might be going very quickly when it happens…

There’s only one version of the RS7 Performance – and that commands a premium of £6,575. When you’re looking at spending around £90,000 on a car, can you justify an extra £6k on buying the fastest one for ultimate pub bragging rights?

We’ll ignore the fact that no one needs a car this fast, or the many hours you’d waste a year filling it with fuel. Some people will be able to justify the RS7 Performance, and we have a lot of respect for those who can. The biggest challenge it faces is the RS6 Performance – essentially the same car with a bigger boot, smaller price tag and, in our opinion, better looks.

The Audi RS7 Performance’s 3.7-second 0-62mph time is within 0.3 seconds of the Audi R8, Lamborghini Huracan and Ferrari California.