Radical custom cars that push the limits of possibility 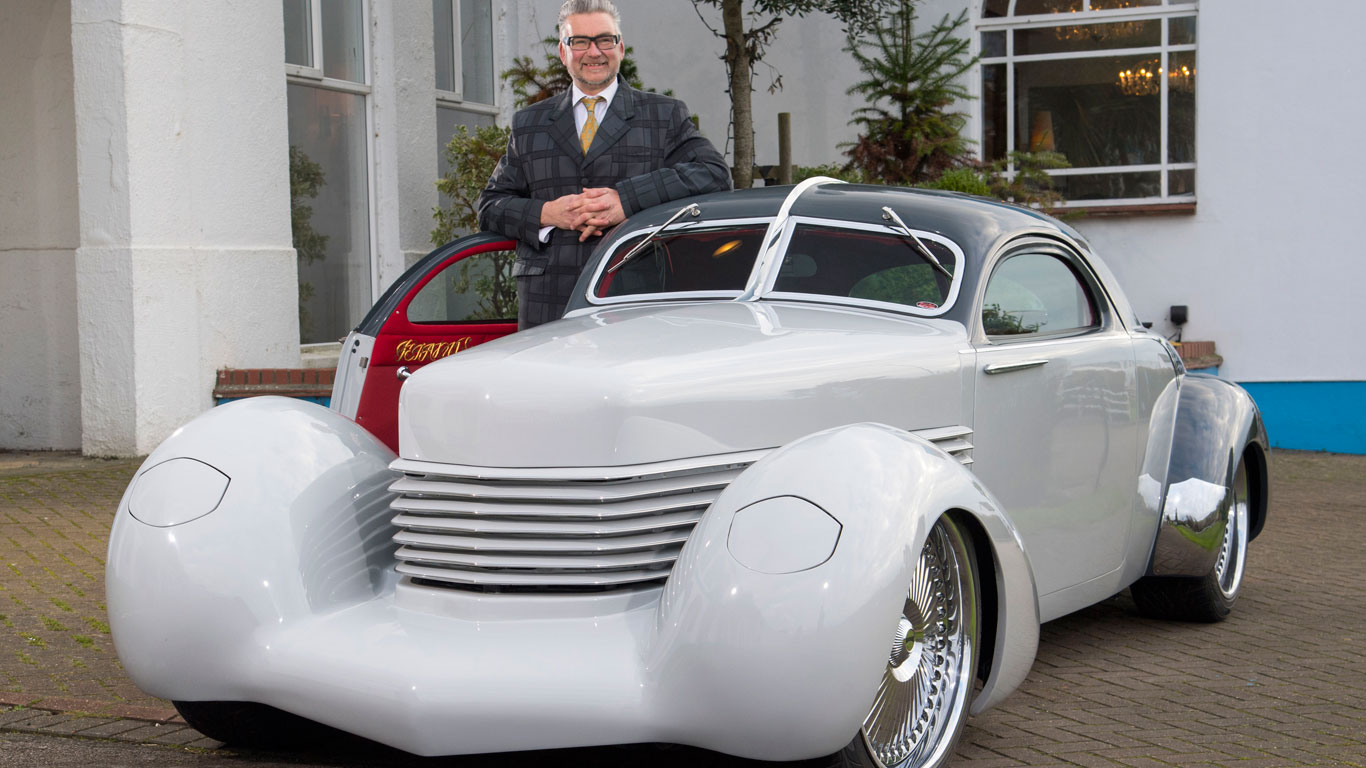 Andy Saunders is one of the country’s leading and most recognised ‘car artists’, responsible for a long line of unique, eye-catching and controversial projects. The customiser – or should that be ‘kustomiser’ – completed his first project before he was old enough to hold a driving licence and has held three Guinness World Records.

This summer, the National Motor Museum at Beaulieu will give visitors the opportunity to get up close and personal with some of his incredible creations, with its new exhibition: The Art of Kustom. Here, we take a look at one of this most famous creations, along with some of the other vehicles you can expect to find. 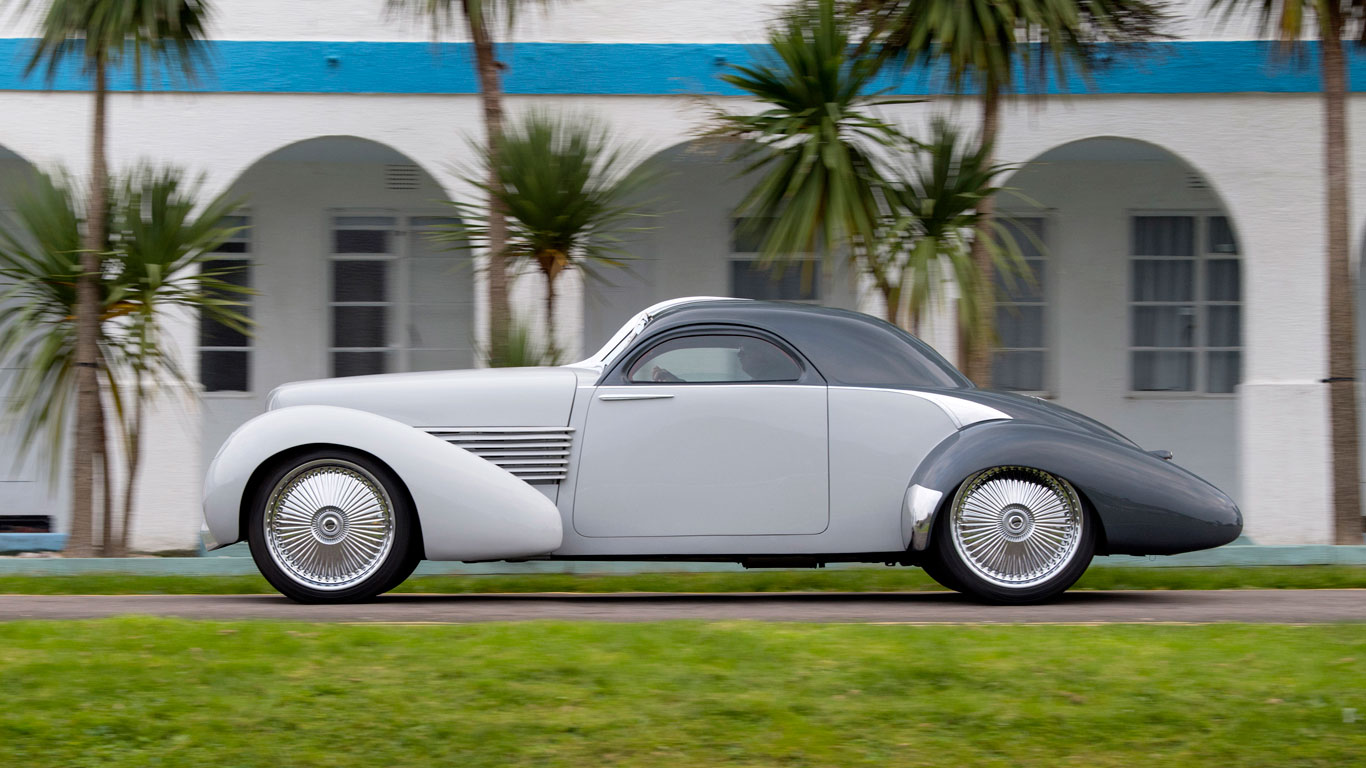 This car started life as a 1937 Cord 812 Westchester: the first American-designed and built front-wheel drive car with independent front suspension. The Cord 810/812 was the company’s second front-wheel drive car, with a body designed by Gordon Buehrig. It caused a stir at the 1935 New York Auto Show, with visitors left slack-jawed by the eye-catching features, such as the ‘coffin nose’ bonnet and lack of running boards.

Tetanus left the factory in Indiana as a right-hand-drive export model, destined for England. It was sold new by RSM Automobiles of Berkeley Square, its first owner being the Earl of Derby. It’s fair to say the Cord didn’t look like this when the Earl of Derby rocked up at a racecourse to watch one of this thoroughbred racehorses.

The Cord was sold to its second owner: Jerzy Wojtowicz of stock car racing fame. He carried out all the necessary engineering modifications to allow it to go racing, but it never turned a wheel in competition use. This meant the doors were never welded up and the body remained true to its original shape. 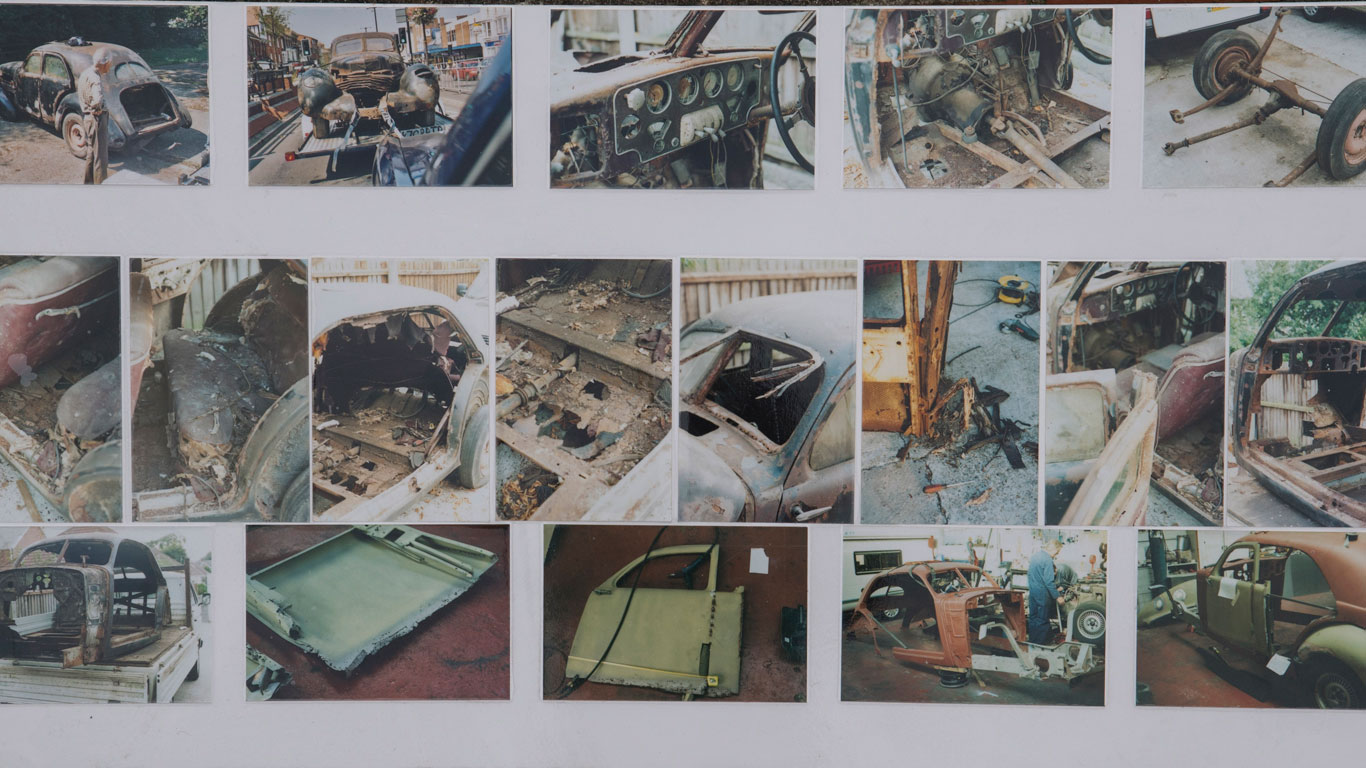 If you’re wondering about the ‘K’ in ‘Kustom’, Andy Saunders told Beaulieu: “Kustom is the only word to describe a period, authentic 1940s or 50s Kustom or any other car that has received major body work to make it more beautiful than it was when it left the factory.” Kustom cars are influenced by the post-war American Kustom scene.

For the best part of 50 years, the Cord sat in a Yorkshire field, being used as a trampoline by local children and slowly being devoured by nature. Amazingly, it was for sale for close to 20 years before Andy saw it.

On the day of collection, Andy’s friend took one look at the rusting Cord and exclaimed: “I’m not touching that without having a tetanus [jab],” hence the name. The redesign and rebuild took 7,000 hours to complete, with Andy creating an imposing two-door coupe that wouldn’t have looked out of place in the Cord catalogue. 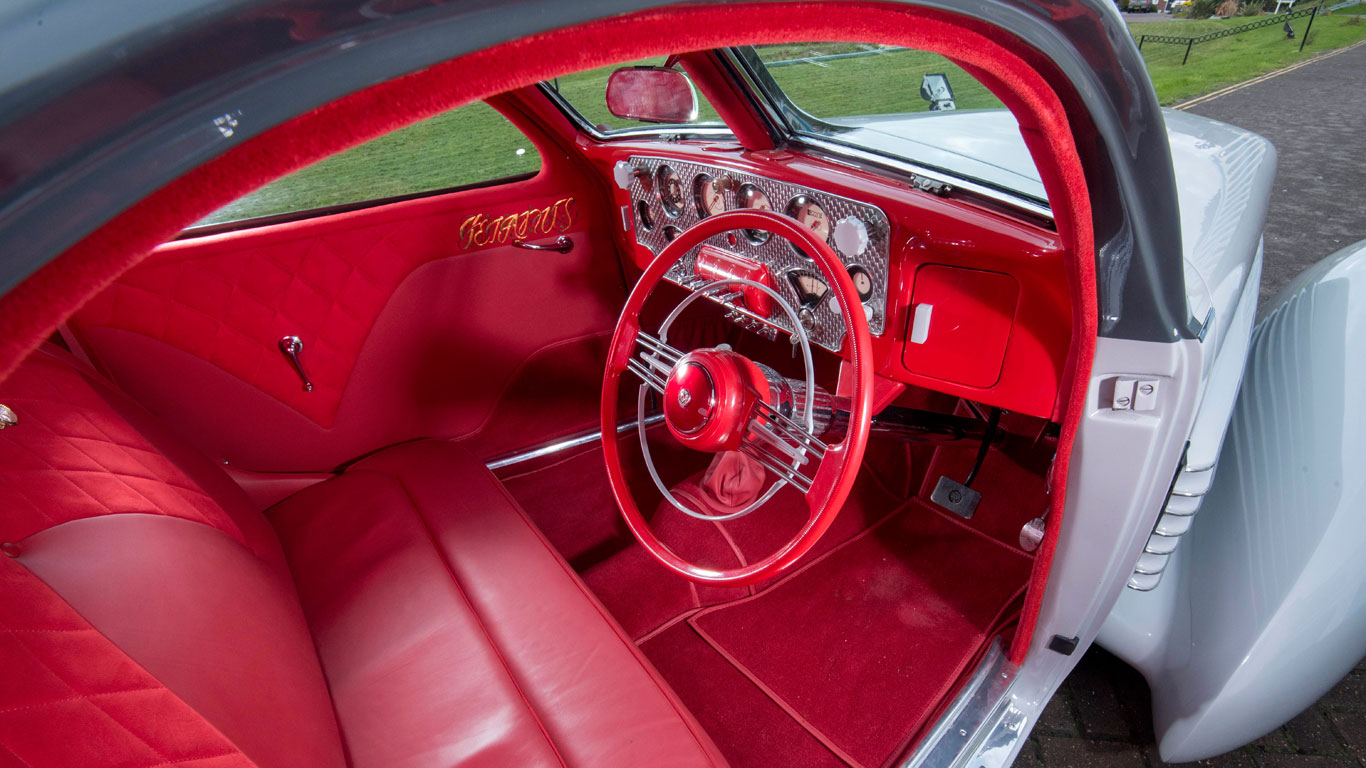 Tetanus was inspired by an illustration on a birthday card, with Andy widening and reworking the wings, lowering the roof, lengthening the doors, and rebuilding the rear end from scratch. Parts from a Jaguar Mk2 and Volkswagen Beetle were used to create that eye-catching back end.

The car was unveiled at the Supernationals in August 2017 and is likely to be one of the stars of the Art of Kustom exhibition. Under the bonnet – or “coffin nose” – you’ll find the beating heart of a Chevrolet V8.

Andy’s first customisation was a Mk1 Ford Escort called ‘Bird Puller’, which he completed at the age of 15. In a video, he admitted that it wasn’t very good at “bird pulling”, not least because it had to be driven to shows by his mother. As Tetanus demonstrates, things have moved on since the Mk1 Escort. 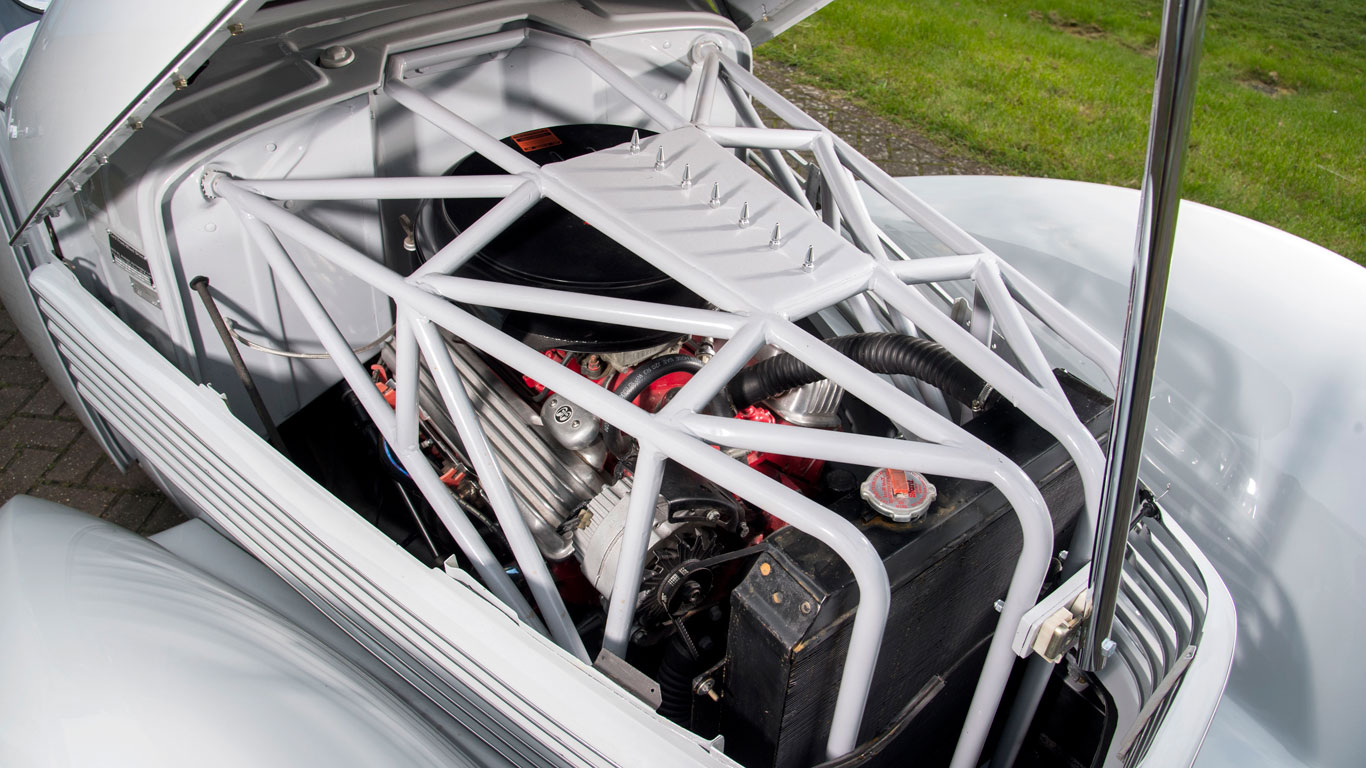 “There’s nothing on cars I haven’t done or can’t achieve… if the budget’s there, it’s possible,” said Andy in an interview with Barcroft Cars. “Customisation is art.” 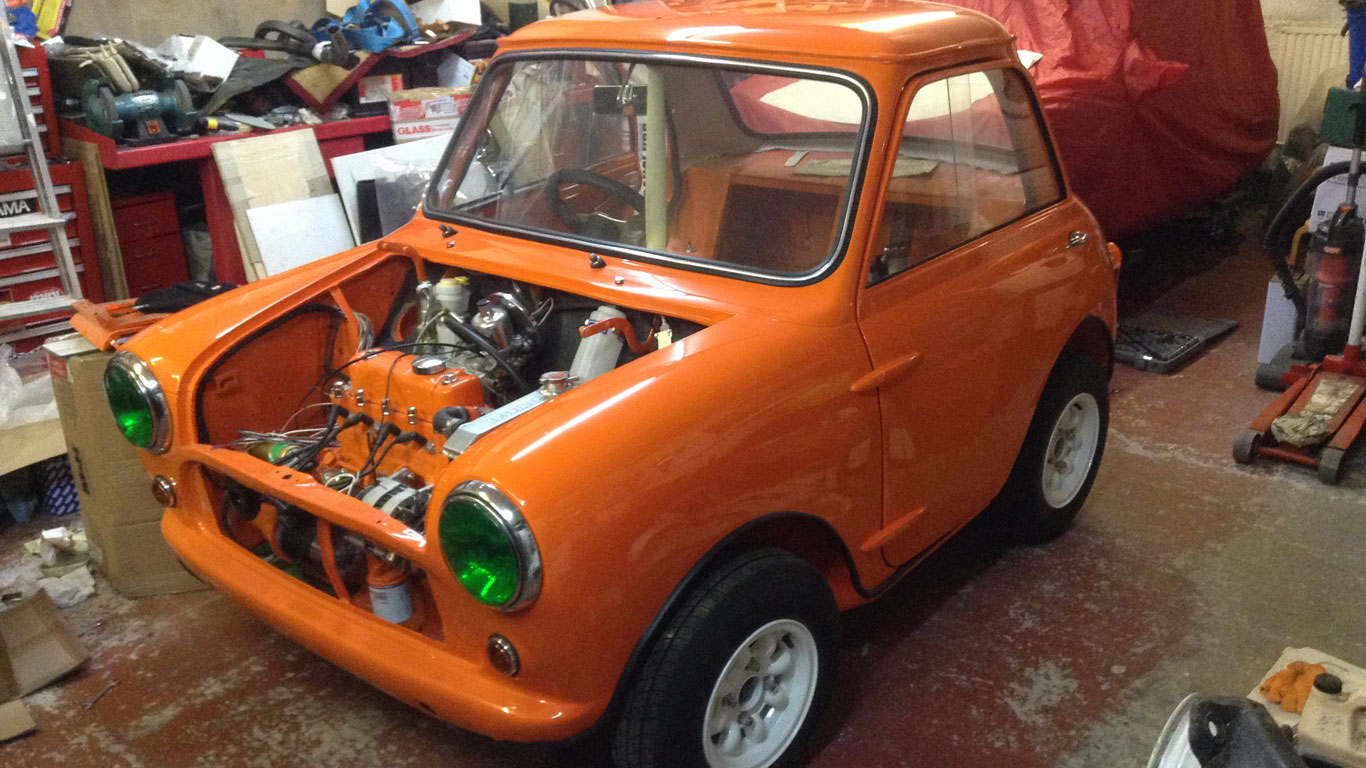 Newly restored to join the exhibition, the Mini Ha Ha will be on show for the first time since the 1980s. Andy came up with the concept as a schoolboy, completing the project on a shoestring when he was just 20. For a while, it was his daily-driver.

The Mini Ha Ha can actually perform wheelies in reverse gear, and Andy’s website has the photographic evidence to prove it. 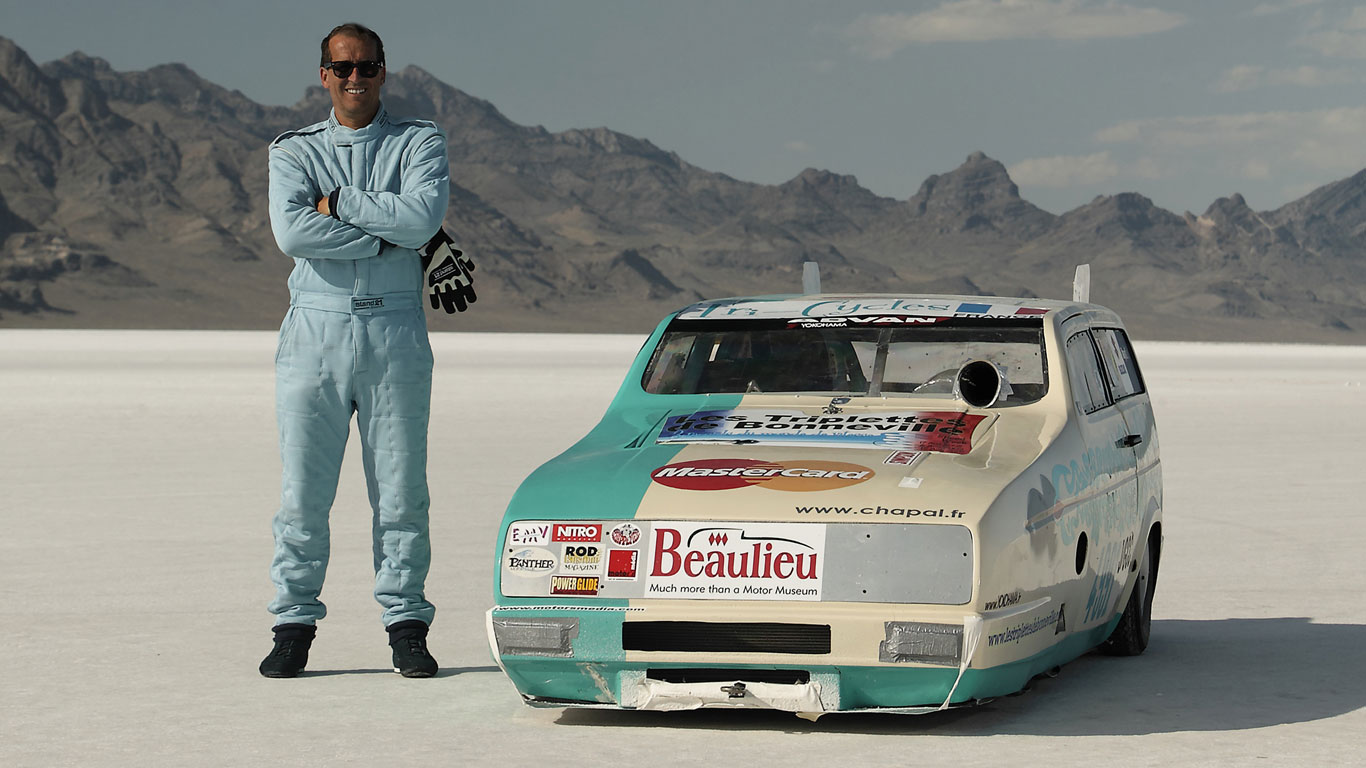 Saline Warrior started life as a Reliant Rialto, but Andy spent just two days converting it into a race car to tackle the famous Bonneville Salt Flats. It was created as part of the BBC’s Panic Mechanics show, and Andy’s solution was to emulate the aerodynamic appearance of a classic salt lake racer, with a lowered roofline, lengthened nose cone and smooth wheel discs.

Later, in the hands of French speed enthusiasts, Les Triplettes de Bonneville, the Reliant was modified with a 750cc Suzuki motorcycle engine and achieved 140mph at the annual Bonneville Speed Week. To set a record, the speed must be set on two runs, but the engine exploded on the second go. 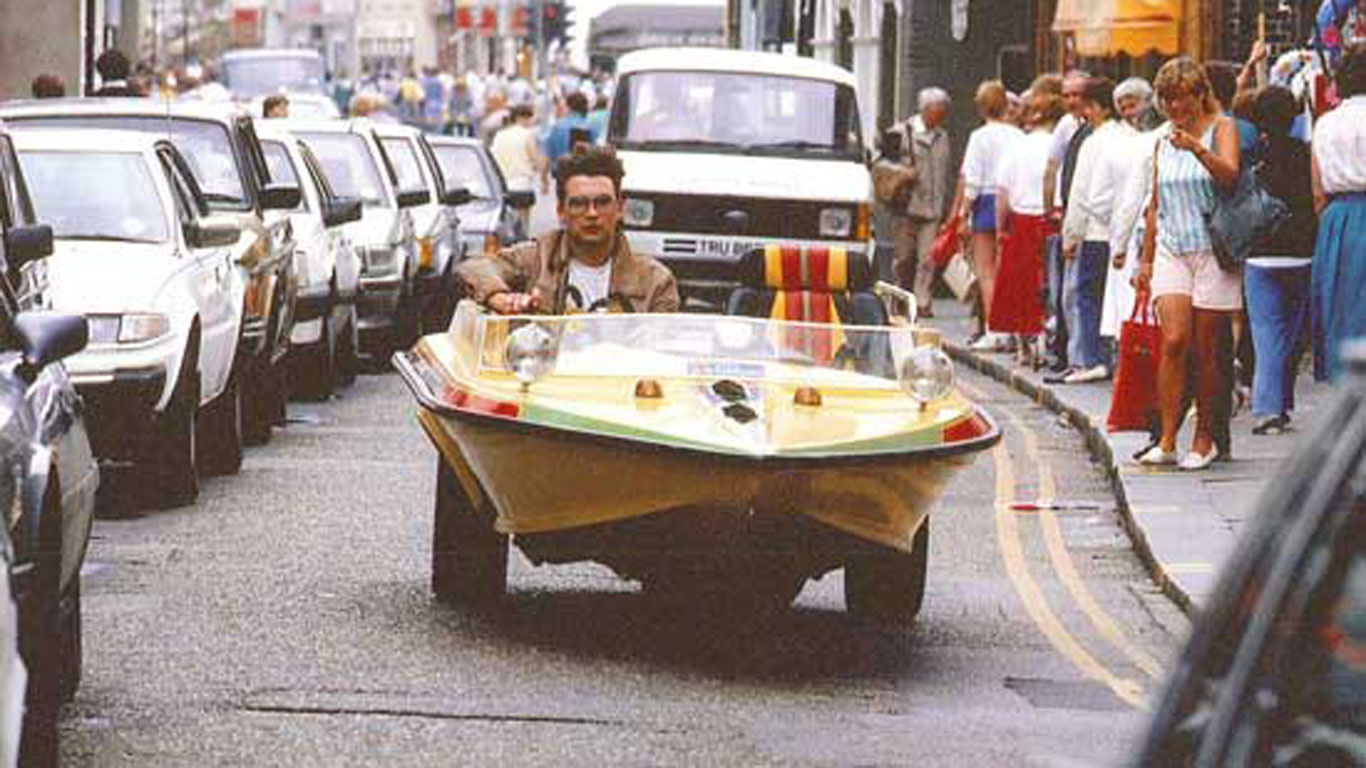 Another Reliant, this time a Regal, which has had an encounter with a Monbar 146 to become a road-legal speedboat. Yes, it really is road-legal… 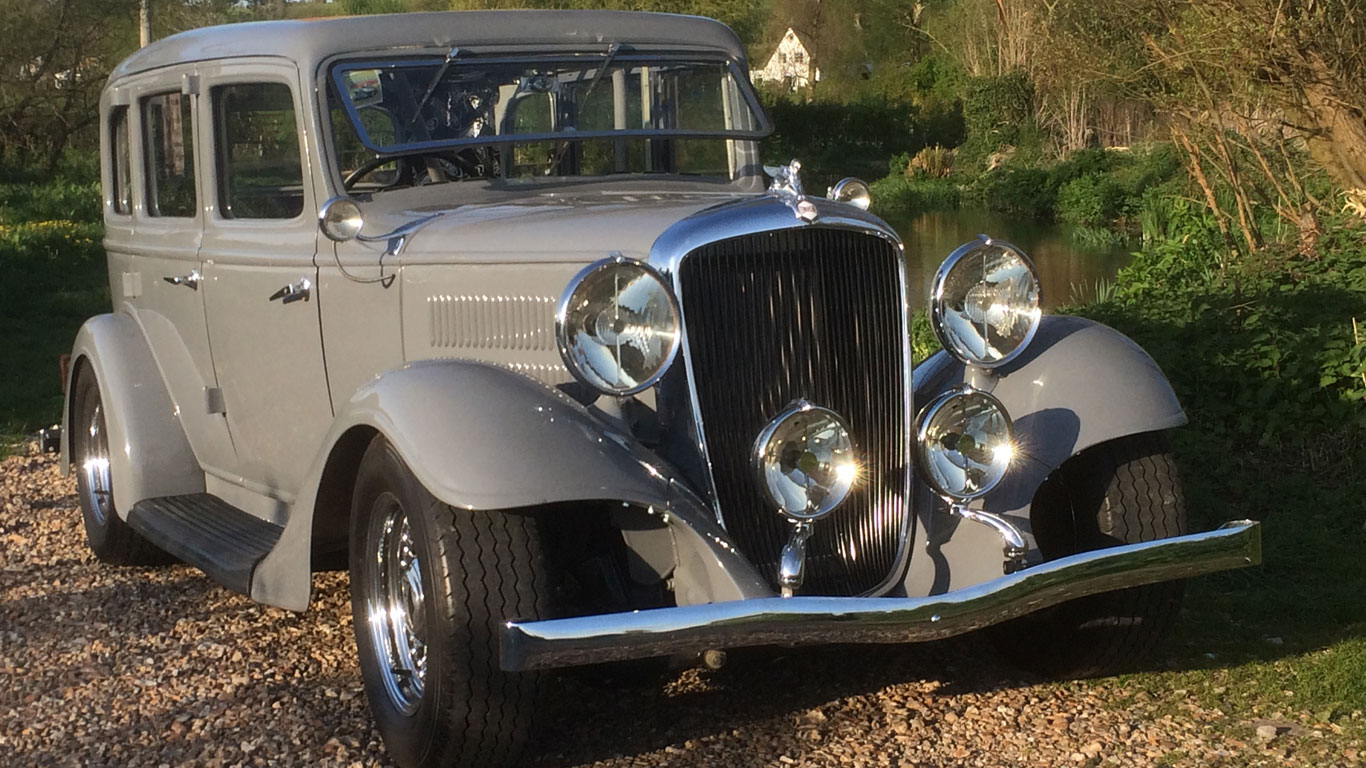 Following a six-year restoration, Hesperus is nearly complete. The 1930s Hudson was built as a street rod in the 1960s and was in remarkably good condition when Andy started the project. It just needs the interior to be trimmed, although Hesperus is already fine for road use. 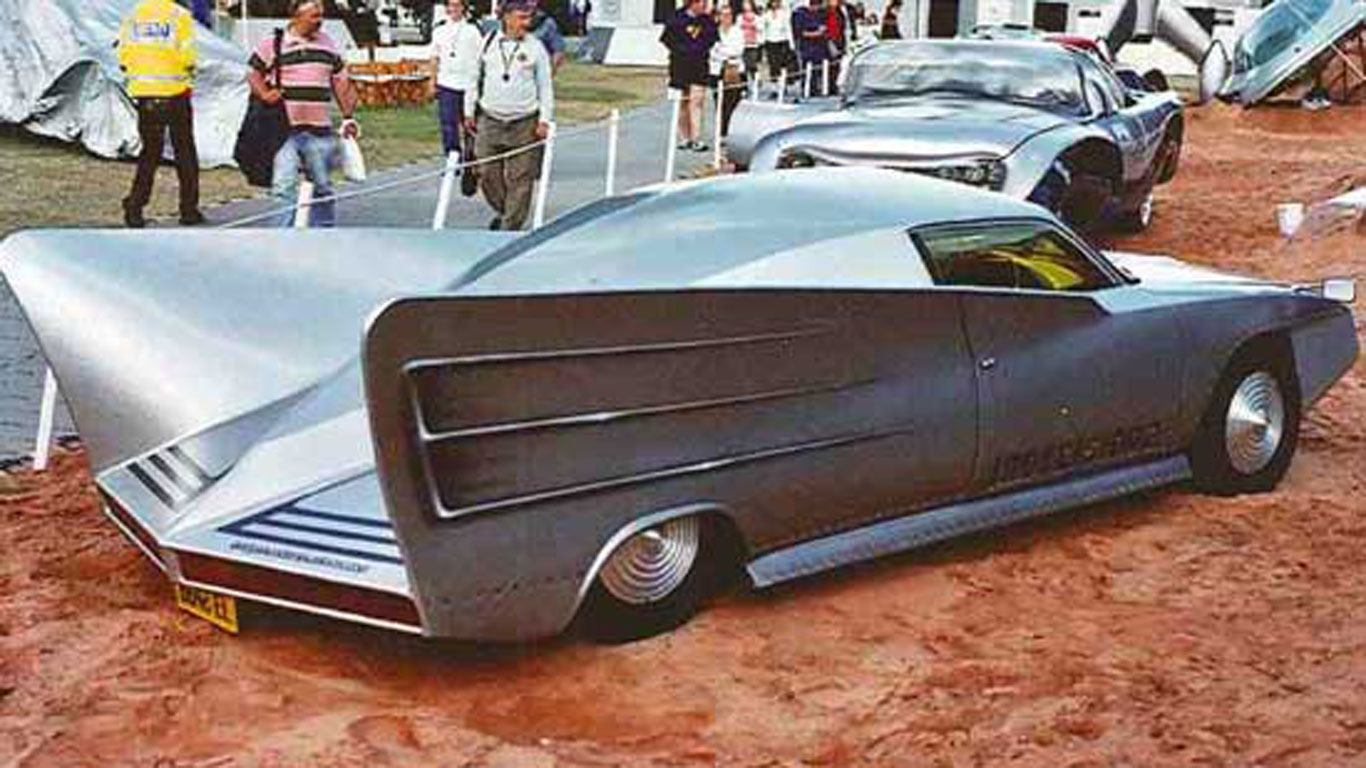 Indecision started life as a 1976 Citroen CX, with Andy adding huge rear wings and a sloping roofline to give it the look of something you might send into space. Amazingly, Andy used it as his everyday vehicle for two years. 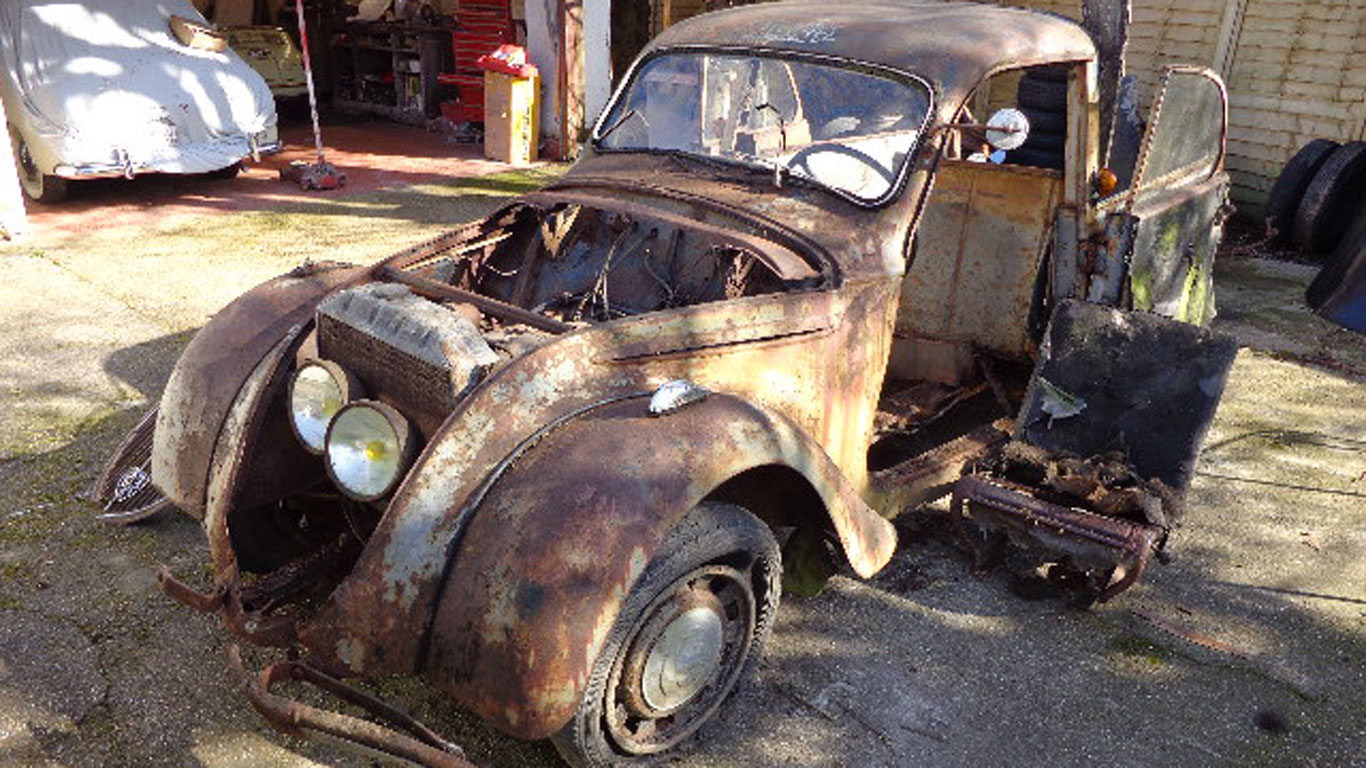 Andy Saunders will unveil his new project as part of the exhibition. Metropolis is a Peugeot 202 pick-up, which has been transformed from a rusty wreck into an Art Deco-style stunner.

The full showcase of Andy’s most jaw-dropping creations will go on display on Sunday 17 June to coincide with the Hot Rod & Custom Drive-in Day, when some of the cars will be driven around the attraction. The exhibition will remain in the museum until September.

The Art of Kustom exhibition can be seen as part of the standard admission to Beaulieu, which includes entry to the National Motor Museum, World of Top Gear and Palace House.

Winter driving: how to save fuel and protect your car

Your car will suffer more engine wear and use more fuel in winter. Here's how to preserve your car and cut your petrol or diesel bill.
Read more